The northernmost section of the Farmington Canal Heritage Trail in Connecticut has miles of beautiful stretches. But for my money, this loop extension Farmington River Trail is your best bet for a nice day out on a bike in this area. Of course, the mere fact that its a 28-mile loop rather than a linear path makes it that much more attractive. 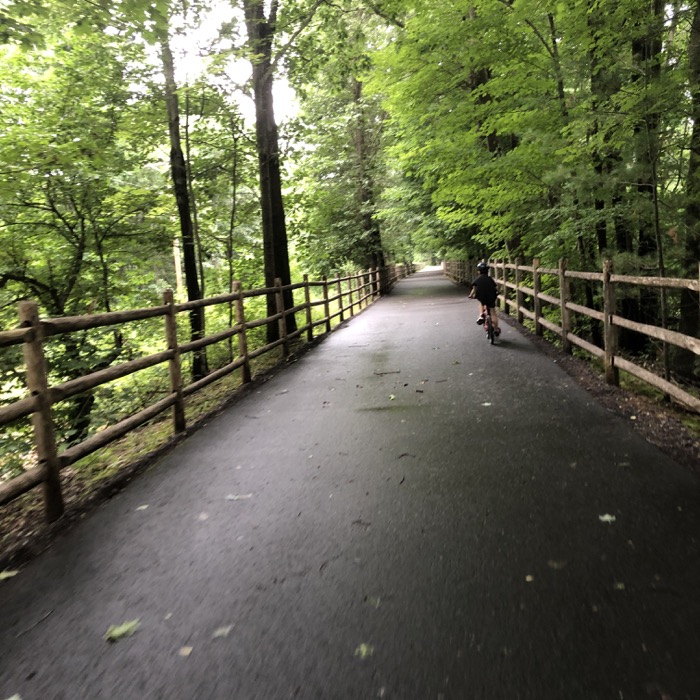 There are several parking areas along the entire way as well as at both ends of the extension. As the name of the trail suggests, it follows alongside the Farmington River for about a third of the way. And it’s very nice.

Calvin and I began at the cyclist’s lot on Coppermine Road in Farmington and began our ride north. The first couple of miles amble through suburban woods along a smoothly paved path. Shaded, flat, and pleasant. 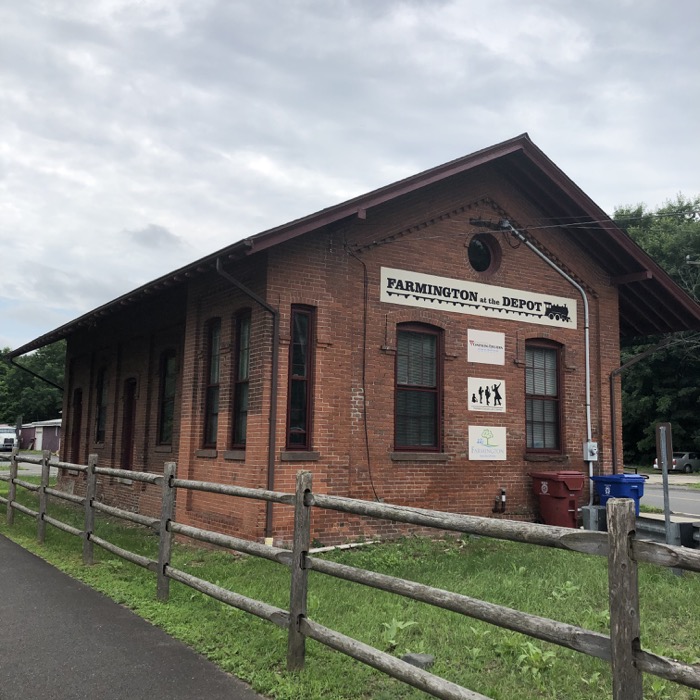 There is a sketchy road crossing at Oakridge where, going north, the trail curves and descends sharply right before the road. As an adult, it’s not big deal. But since so many little kids ride these trails, you’ll appreciate the heads up. (And keep reading, as there’s a far worse situation ahead.) 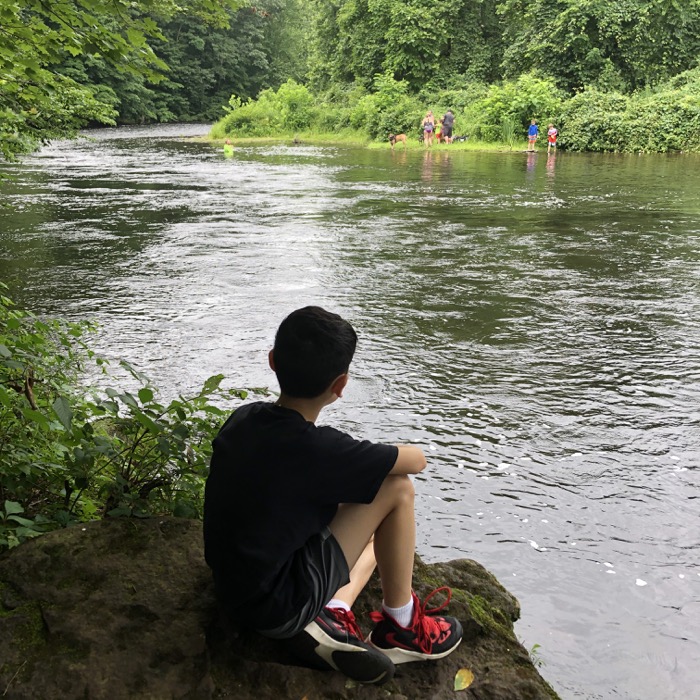 After we navigated the “downtown” area, we rode alongside the trail’s namesake river. Hooray for Calvin! He can stop and throw rocks and stuff! We actually did pull off at the first opportunity to do so and followed well-worn path to the river.

The Farmington River is a gem. I’m no fisherman, but the hordes that descent on the river in waders to fly fish tells me it’s a good spot for such activities. For the next several miles, all the way up through the Collinsville section of Canton, the FRT follows its banks. 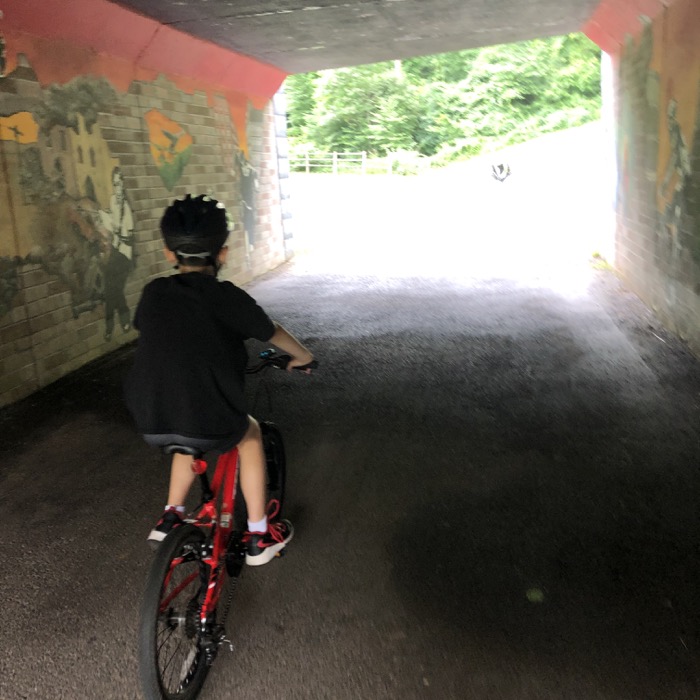 Calvin and I went through the “art tunnel,” as I call it and passed the trailhead for the town’s Taine Mountain Trails. And speaking of hiking trails, near the Burlington border, we rode past the entrance to the Power Dams Trail, a short walk Calvin and I enjoyed a while back.

This is just such a beautiful stretch. So beautiful, it’s part of CT Art Trail Viewpoints Trail Thing that no one in the world cares about. Except me. Heck, I even wrote a page highlighting the spot. 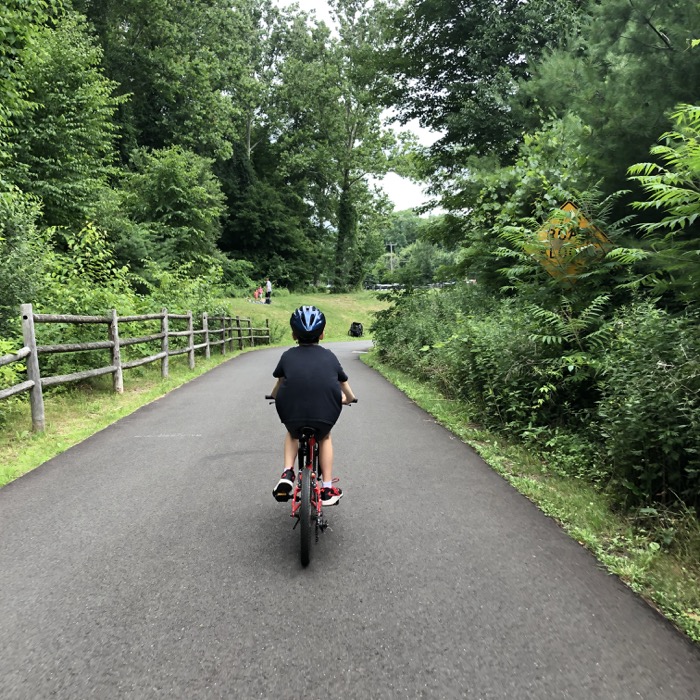 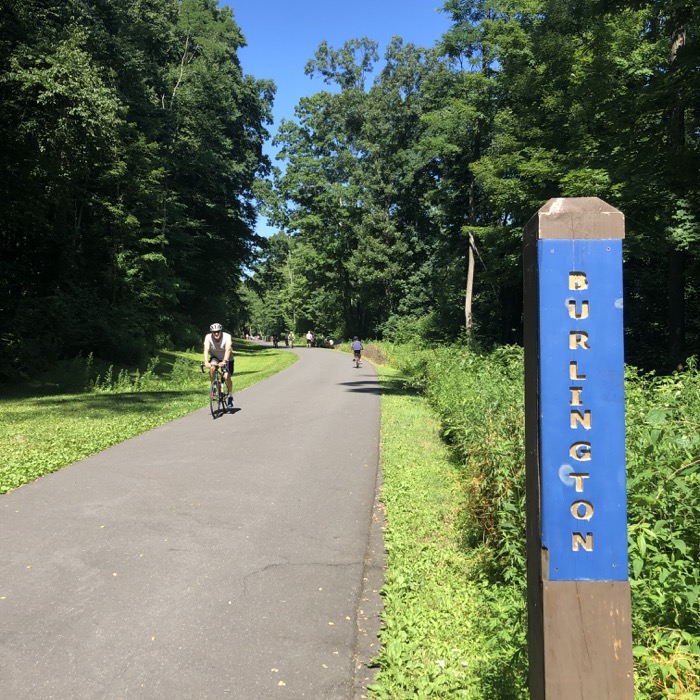 As we approached Canton, we passed the dam everyone is familiar with – or is at least familiar with the ever-present, ever-changing graffiti there. Collinsville, like Unionville, is another fake town within a town. It was home to some industrial powerhouses back in the day, powered by the river. The most famous was the Collins Company, and I actually like what Wikipedia has to say about it.

…the Collins Company Axe Factory, a manufacturer of edge tools, such as axes, machetes, picks and knives. Collins machetes were the brand of choice in South America. Collins tools were used almost exclusively for the construction of the Trans-Siberian Railway, and axes and picks made their way across the country to be used in the California Gold Rush. Admiral Peary carried Collins tools to the North Pole. 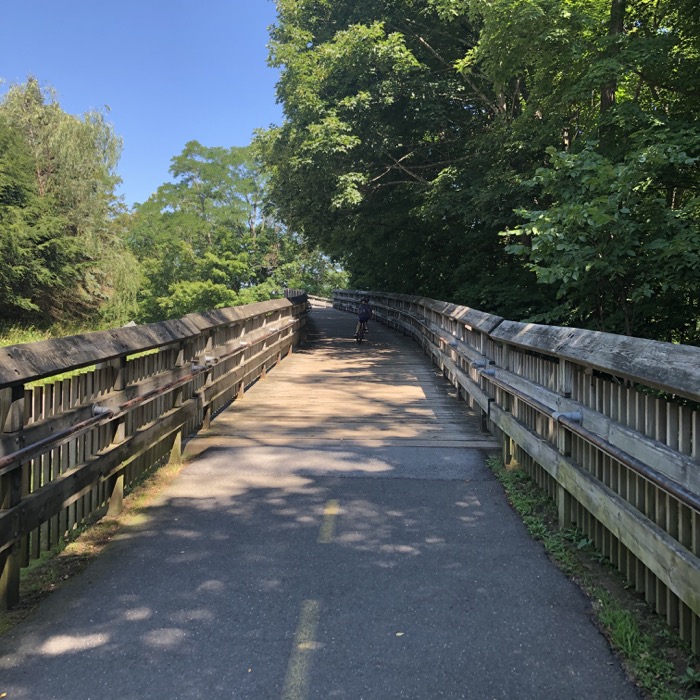 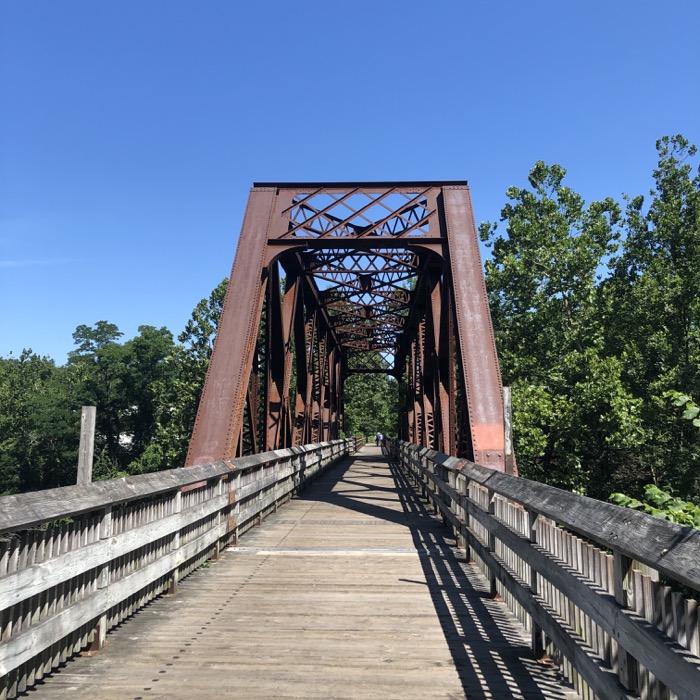 Typical of New England mills, the Collins Company axe factory was sited on a river, and their production was powered by utilizing the water’s strength to turn turbines and power machines. The numerous old buildings ramble along the riverbanks intertwined by an intricate maze of sluices that run throughout the site. The company closed its doors in 1966, but the factory buildings stayed standing and are now rented out to local businesses. The ambiance of Main Street reflects period architecture with ornate details from the start of the 20th century.

The FRT follows some riverside roads on its approach to town and eventually crosses a bridge often used in travel literature. Heading north, this bridge provides a 100-yard climb that probably poses a problem for some. However, heading south…

The bridge provides a 100-yard downhill with a 90-degree turn at the bottom just before a huge bollard in the middle right before disgorging riders into a street crossing. If you aren’t aware of what’s coming, you may crash. If it’s wet and you’re going with any speed, you will crash. If you navigate the turn and miss the bollard and a car is speeding along, you may die. 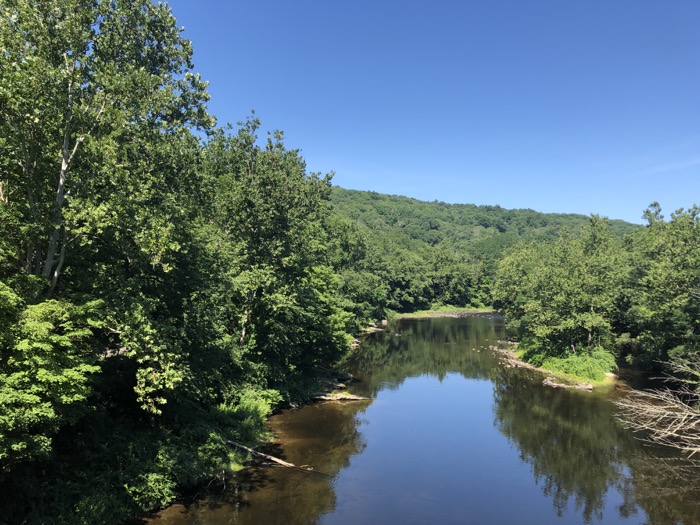 Quite frankly, they need to put some signs on the bridge for those headed down it. Aside from some road crossings – which all have stop signs and such – this has to be the most dangerous thing on any bike trail in the state. It’s a bit bonkers. (Calvin and I ride sections in out-and-back stretches, and he led the way down going out. He did well, but once on the road turned to me and basically said, “Bro. What was that.”)

Collinsville is Connecticut’s little Boulder, Colorado. Without the mountains or the marijuana or the world-class athletes. But it is mildly hip, has a few bars with open mic nights, and has become a big cycling and kayaking and paddleboarding mecca. And people are always walking around. I think I’m trying to say that it has a good vibe. The FRT also takes cyclists right past the Canton Historical Society Museum here, which of course is awesome. 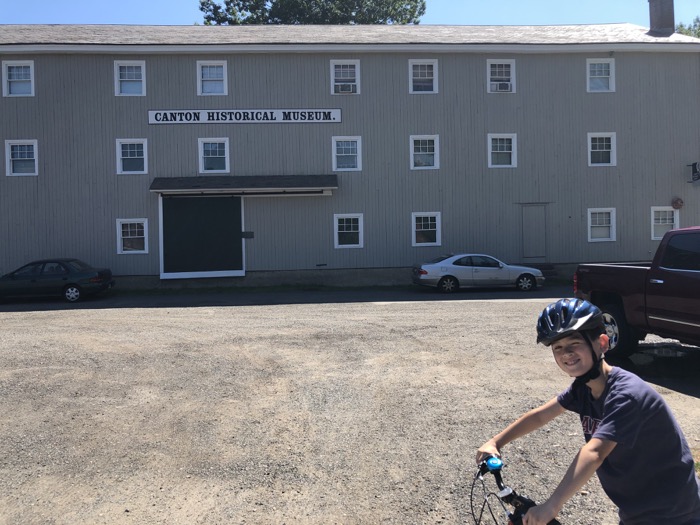 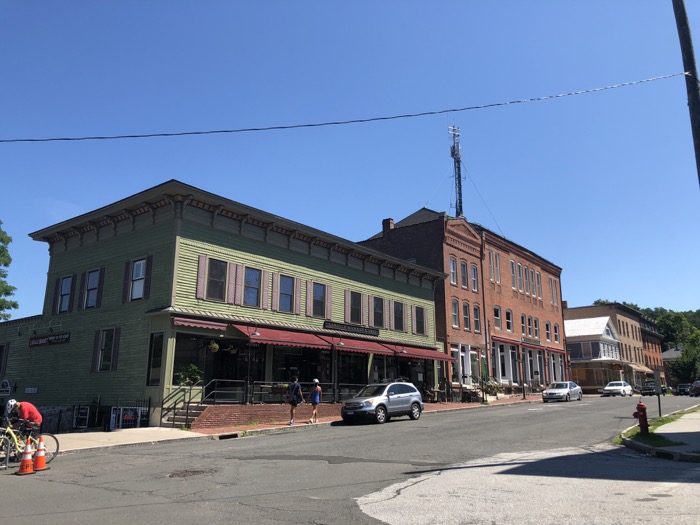 Heading north out of town, the riverside trail travels a raised boardwalk lined by flowers. Standing paddleboarders littered the dammed portion of the Farmington and it’s all so serene that you won’t even notice that you’re riding next to the Canton Sewage Treatment Plant.

There is another lot at that sewage plant and it’s a good one to use if you just want to do the better half of the FRT (south). Because continuing on north is a bit dicey for parents with their children. The trail leaves the river here and proceeds to cross a lot of roads through suburban Canton. 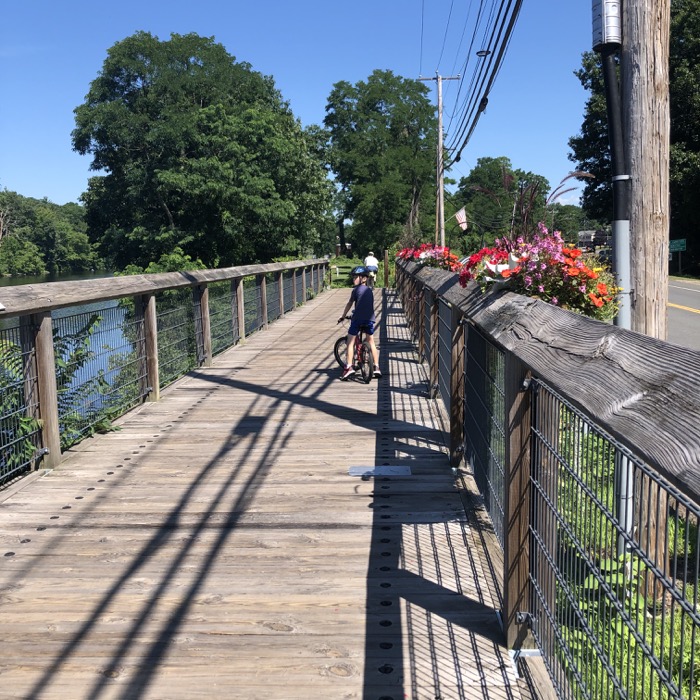 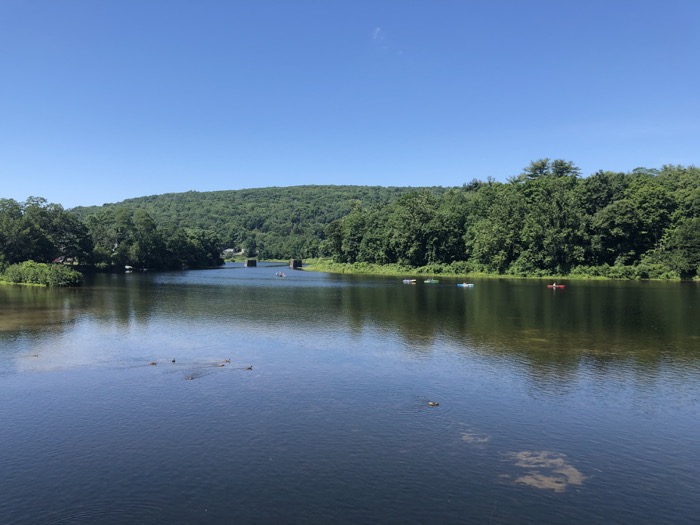 That’s just a fact of putting a bike path through central Connecticut. We passed a nice pond that I just learned is named Bond Pond. Pond. Bond Pond. Canton has put a bunch of interpretive signs along its entire section of the FRT. There’s a final one right before we reached the largest road crossing on the entire FCHT/FRT. I think. (The FCHT goes under route 44 by the Avon police department.) 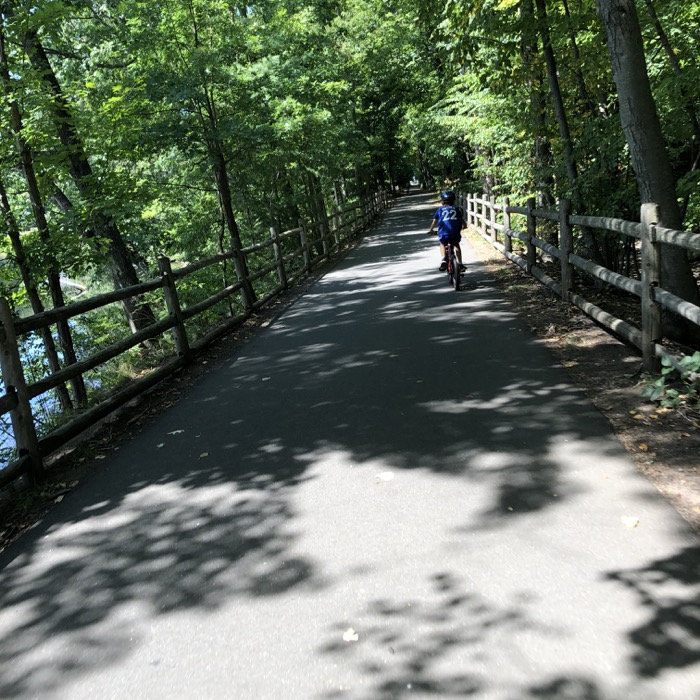 Don’t try to be tough and cross 44 here without using the proper crosswalk allowances. And honestly, if you have kinds under, say, 10 or are uncomfortable riding in traffic, this next section isn’t for you. For once across 44… there is no more fancy graded paved path through the woods. Nope. You’re on curvy Canton and Simsbury backroads with no shoulder.

For experience cyclists, it’s a nice ride. And in the summer of 2020 at least, there are FRT signs at each intersection to guide you. (And trust me, you’ll need them as the route is not otherwise clear.) 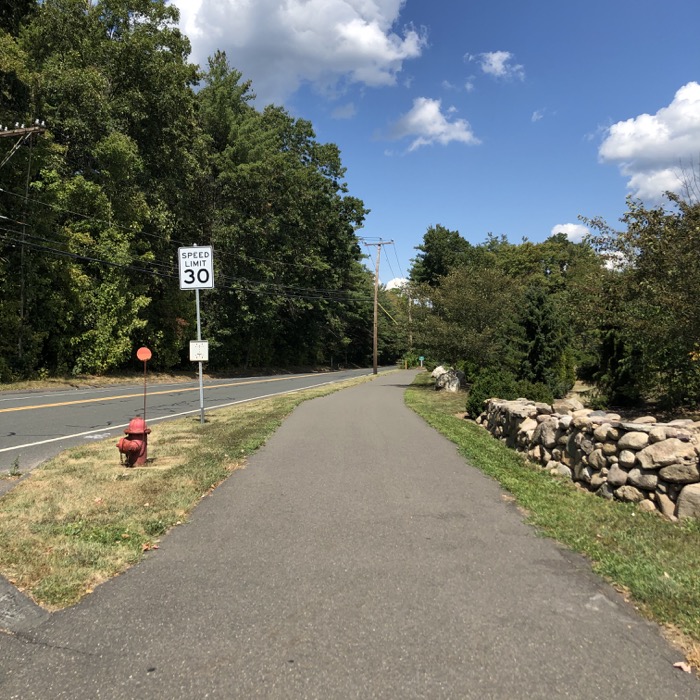 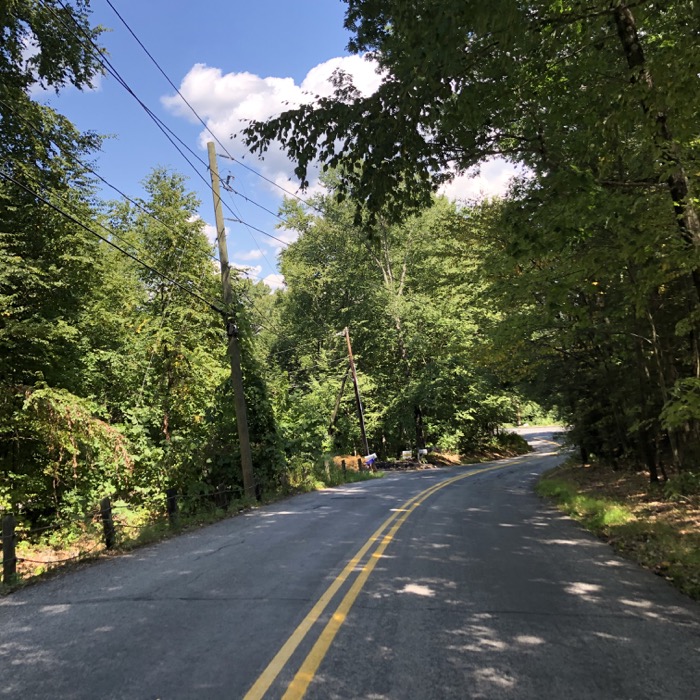 After a couple of road miles and now in Simsbury, keep your eyes peeled for a town park along West Mountain Road, for that means the FRT makes its abrupt return to the woods shortly thereafter. And the trail is very different here.

It is an unpaved dirt trail. Of the 16 miles of the extension, about half is paved, a quarter is road, and a quarter is dirt. It makes for an exciting ride. Adding to the excitement here in Simsbury are all the tree roots! (It’s not that bad, but be aware.) 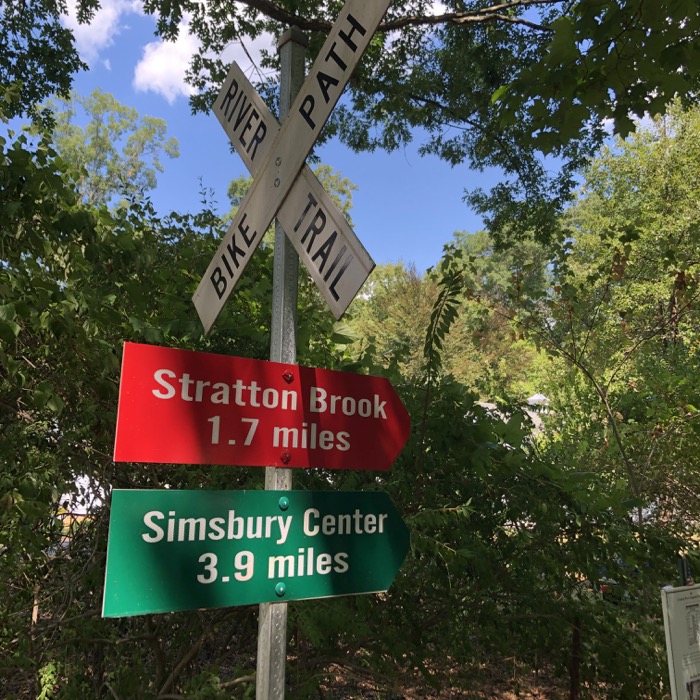 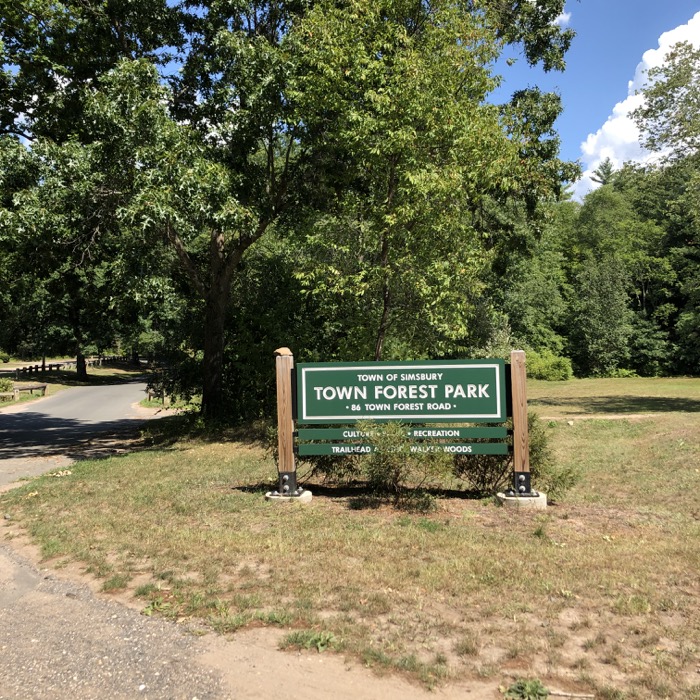 Or you can keep heading northeast on the FRT, to the end of the road, across the other road, and into Stratton Brook State Park. This is a beautiful mile or so of trail. 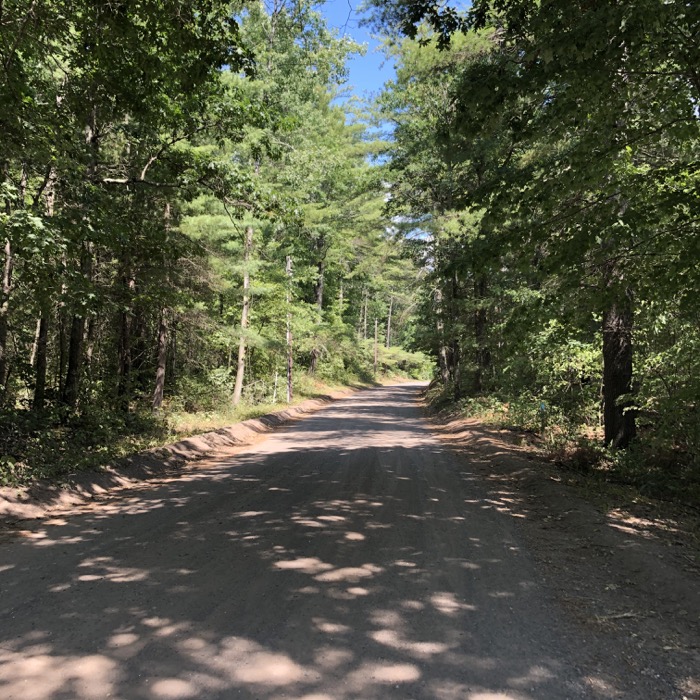 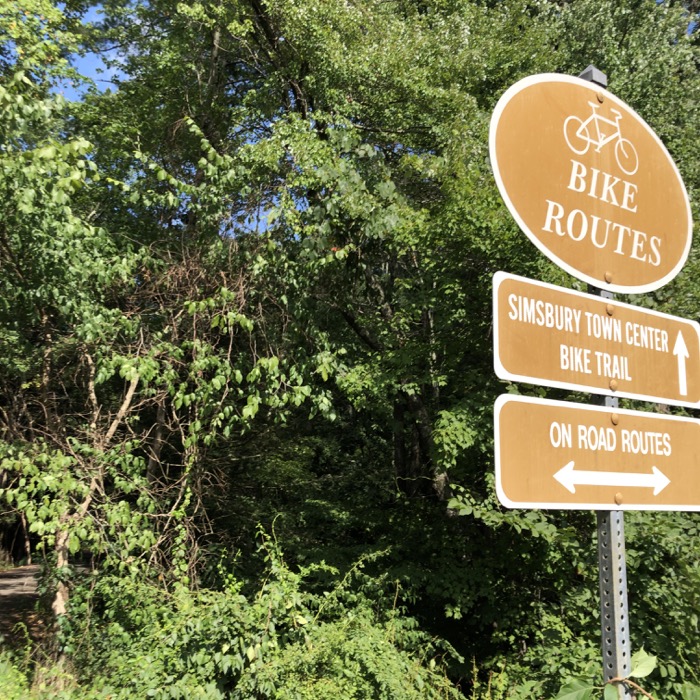 And it’s not just the pond and covered bridge that add to the tranquility of the ride. It’s more the cathedral of pines that stand usher you all the way from the state park’s center, near Simsbury High School, and out onto West Steet.

From there, the path follows the road, past the excellent Millwright’s Restaurant and finally to Hopmeadow Street (route 10/202). Here, head south along the Farmington Canal Heritage Trail into Avon, Farmington, Plainville, and beyond. Or head north, passing the famous Old Drake Hill Flower Bridge before heading up alongside Iron House Boulevard on into East Granby and Granby before hitting the Massachusetts state line in Suffield. 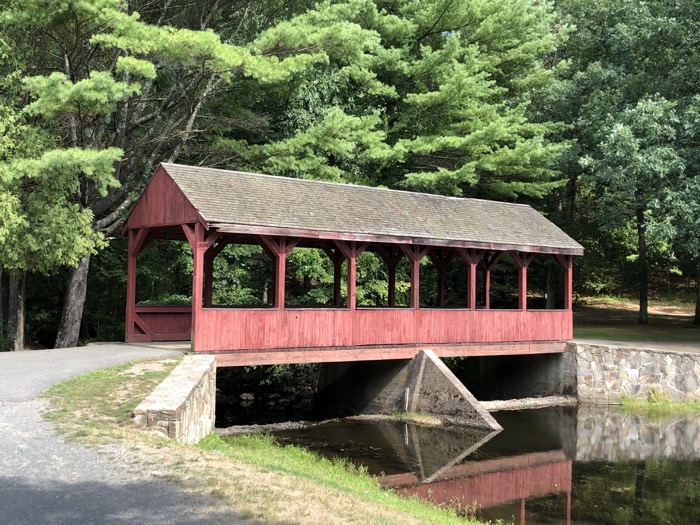 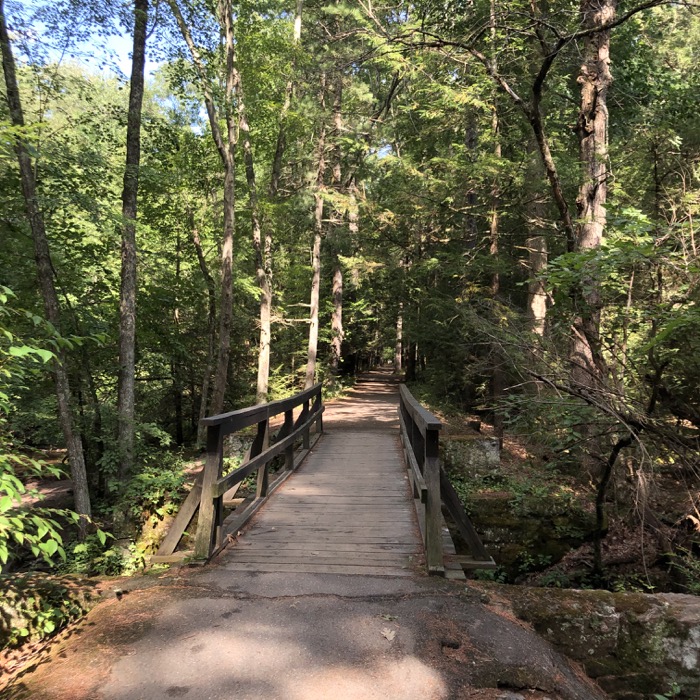 The Farmington River Trail allows for a pretty cool loop ride of about 28 miles. The only issue is the fairly lengthy road ride in Canton that wouldn’t be super safe for younger kids. I guess a good rule of thumb is, “if a person can do 28 miles without issue, that person can handle the roads in Canton.” 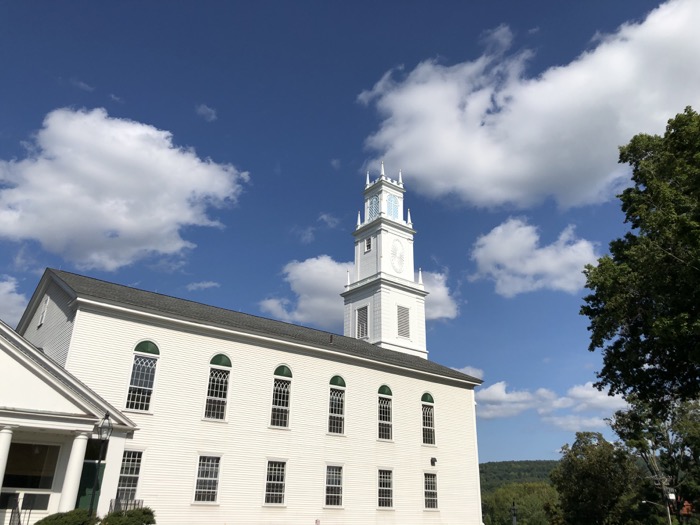 The First Church of Christ, where the FRT meets the FCHT