Way (WAY) back in the day, the Wangunk Indians called this place home. From the top of the hill here, they could see for miles and they called this place “Mattabeseck.” Hm, where have I heard that before? Oh yeah, that’s right, I’ve hiked the entire Mattabesett Trail which sort of circles Middletown in a 50 mile trek, including over the summit of Beseck Mountain. (Follow that adventure here.) 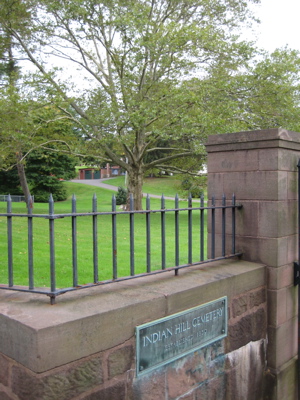 Around 1639, the natives built fortifications up on this hill, perhaps to guard against enemy tribes and/or to keep out the whites who had already killed large numbers of Native Americans with their fancy smallpox and other European diseases. Of course, in time, the Wangunk’s sold much of their land to the colonialists, keeping this small parcel for themselves.

The English and Indians actually lived peacefully for two decades but ultimately, scared for their lives, Wangunks sold almost all of their land to the English to keep them at bay. Apparently it worked as the Wangunks lived on this (now cemetery) land until the late 1700’s before selling off the last parcel.

Several of them remained in Middletown and married into the local black community. Wow, a moderately happy ending to a Native American story in America. 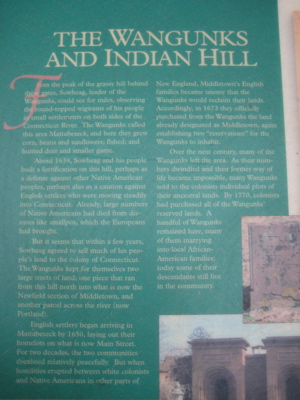 The cemetery is very pretty, built in 1850 here in the most scenic spot in town. (I tend to disagree, having been on the hilltops over in the southern part of town.) All of Middletown’s elite were buried here in the 19th century, including one Frances Russell (whose name has popped up along this Middletown Heritage Trail before) who had an elegant brownstone chapel erected in memory of her husband.