The next time someone whines about how there’s nothing to do in Connecticut, send them our itinerary for this sunny November Saturday. I thrive on these random road trips and, I really do believe, Hoang appreciates them. And Damian? Well… He tolerates them. Around 9:30 in the morning, Hoang asked, “What adventure are we going on today?” I had no such adventure planned, but I happily took up the challenge, printed off a few directions, and we hit the road west. 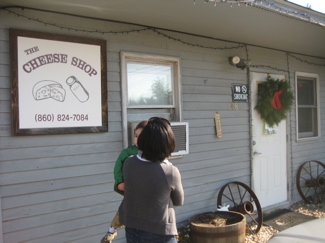 There were no museums on the docket, but here’s where we went: The Rustling Wind Creamery, a drive down the scenic Route 7 along the Housatonic River, the West Cornwall Covered Bridge, Kent Falls State Park, and the Oldest operational Union Train station in the US. We drove by Frog Rock (west), the Appalachian Trail, the South Canaan Meeting House Museum, Lime Rock Park and stopped in at the beautiful Norfolk Library designed by George Keller – the same guy who designed the Memorial Arch in Bushnell Park – the oldest public park in America, by the way. 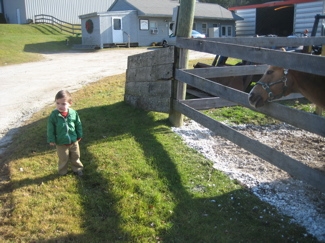 The drive itself is nice enough, but the various historic and scenic (and delicious) stops along the way made it all the better. This is what we do in our house… trust me, there’s something cool in every corner of the state.

As invaluable as Google Maps is to my life, I often find it somewhat confounding in that it doesn’t discern between dirt roads, paved roads and rutted goat paths sometimes. This has been an issue for me in the past when driving to trailheads from which to hike. On our drive out to the Rustling Wind Creamery, I plotted the most direct route down a road called Mountain Road. The road connects Norfolk center near the 44/272 intersection with the eastern part of Canaan. See, here’s a map: 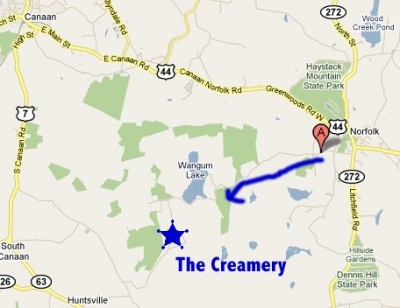 As you can see, this road is as remote as you’ll find in Connecticut. As you can’t see, most of it is a single lane gravel road – although it is pretty well maintained (at least, perhaps, until it snows). To say the least, it surprised me a bit but Hoang, much to her credit, told me to relax and enjoy the woodland beauty so we spent our time looking for moose – which isn’t as ridiculous as it sounds out here. After about 10 minutes of bouncing and weaving, we reached Canaan Mountain Road and headed down to the creamery. 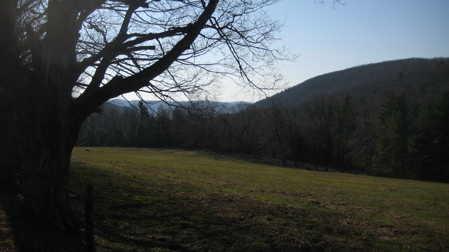 My gosh it’s beautiful out here. I imagine that during peak foliage season, this whole backwoods drive would be unparalleled. A short way down the mountain we reached the Rustling Wind stables and the creamery right next door. We may as well been in the hinterlands of Quebec somewhere; it felt that remote. Although I just read on their website the somewhat laughable, “The Creamery is easily accessible from routes 7, 63, or 44.” You surely don’t have to approach the way we did, but coming up from Route 63 you must climb a gosh darn mountain up a long and winding road. It’s not dangerous, but if you’re one of those wimpy drivers you may want to order their stuff through the mail. 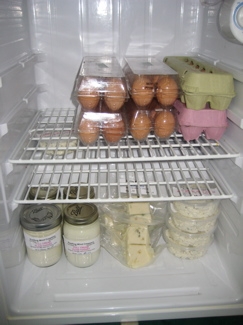 We parked in the empty lot and took Damian over to see the horses. The friendly beasts sniffed his head and even let him pet them on their noses. It was a very Hallmark moment, but we had some locally made cheeses to check out inside. I can state with 100% confidence that as much as he loves animals, Damian prefers cheese to just about anything in the world.

We entered the tiny retail area and were immediately struck by the “down-hominess,” if that’s a word. Spellchecker says it is, so that’s good enough for me. Here’s their story of how they got started, in their own words (All of the cute sics have been cleaned up):

The real story is based on the fact that small farming, particularly dairy farming is not very profitable. Joan operated a small dairy selling milk to a large processor where it was bottled along with the milk from many other dairies. With the price of milk remaining constant and costs of supplies, energy and feed rising, Joan had to find a way to make small scale farming profitable. The answer was to create a value added product and market the milk herself.

In 1998, owner Joan Lamothe, started Rustling Wind Creamery with the help of her good friend Florence Brocklehurst, a British native and master cheesemaker. Joan had just sold her dairy farm and the small herd of Jersey cattle. Florence had come to the U.S. with her husband Frank to raise sheep and goats and make cheese. Together the two decided that starting the business would be their new venture, and a good venture it has been with some great cheeses and more! 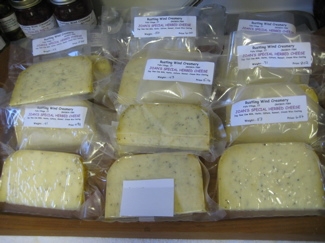 Shortly after the business opened, Florence had to return to England to live. Joan continues to run the business, milking goats and cows and making cheeses. Unfortunately, Florence is only able to come to the U.S. occasionally but her recipes and teachings remain and her presence is throughout the entire business.

Along with cheeses the business has expanded into Jams and Jellies, Chutneys, Pickles and Relishes, Maple Products, Goat Milk Soap, and Hand Knits from our own sheeps wool. 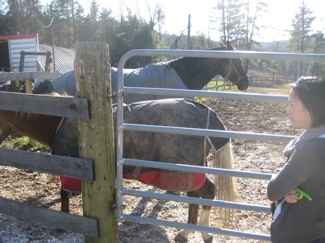 That’s cool, but for CTMQ purposes, we’re only interested in the cheese. I’m really pushing for the state’s cheesemakers – several of which are very highly acclaimed – to develop a little “cheese trail” program similar to what the wineries have done. I’ve been to six of them now and have enjoyed each one immensely. At the least, they are reasons for people to visit towns like Canaan. 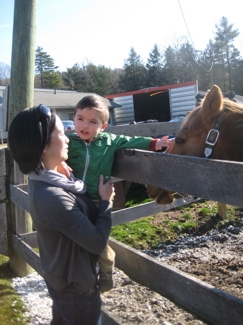 So, Rustling Wind, what kind of cheese do you offer?

At Rustling Wind we offer six pressed cow’s milk cheeses, two pressed goat cheeses, one fantastic blue cheese, and one soft herbed spread from goats milk. All of our cheeses are made from natural ingredients and do not contain preservatives or additives. Our cheeses are all aged a minimum of 60 days except the fresh soft spread made from pasteurized milk. Cheeses are hand cut and are priced per pound. Rustling Wind cheeses are sold in vacuum sealed packages.

Cheshire Cheese is Britain’s oldest named cheese it can be dated back to Roman Britain and is mentioned in the Domesday Book of 1086. In the 16th century it was a favorite at the Court of Elizabeth I. Originally, Cheshire was made near the village of Chester on the River Dee, but it soon spread to farms throughout the county of Cheshire. Originally, cheese making in Cheshire was practiced on farms during the Spring, Summer and Autumn to conserve the milk from the fresh grass. 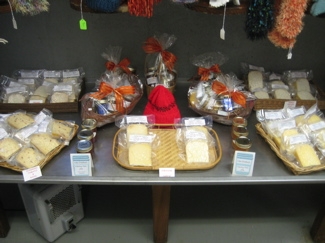 I had to look it up and I’m glad I did. The Domesday Book is pretty cool.

Rustling Wind’s Cheshire cheese is made from jersey cow’s milk and aged a minimum of 60 days. It has a mild flavor and aroma that remind you of a fine Cheddar. Excellent as a table or melting cheese.

Wensleydale Cheese can be used as table cheese and is very tasty with apple pie. This cheese is based on the recipe that can be traced back to the Cistercian monks who came over with William the Conqueror in the 11th century. There are two types of the British classic Wensleydale.

There is also a sage cheese, a bunch of herbed cheeses, a soft herbed goat spread, plain and herbed goat cheese, and a cow’s milk bleu cheese. Unfortunately there were no samples for us to nosh on (and yes, Damian was not a happy boy), but we survived and bought a small chunk of bleu cheese. Hoang and I loooooove bleu cheese.

A lot of the time at Rustling Wind, purchases are made via the honor system (this seems to be a theme at these joints) but we were fortunate enough to have a human give us change. We left, drove down the mountain and went about our aforementioned day. 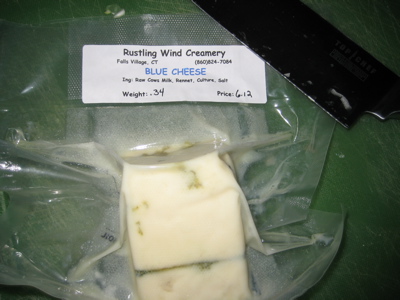 A couple weeks after the trip, I decided to make something exciting with the cheese: Caramelized onion and bleu cheese tartlets. I found a recipe which was from England and had stuff like “brown onions,” grams and some kind of sugar I’d never heard of. Whatever, I struck out on my own and pretty much figured it all out. 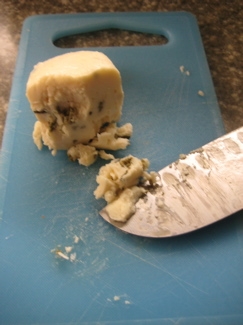 Instead of using puff pastry, I bought some ridiculously expensive premade French pastry tartlet shells from Whole Foods for something like 9 bucks for 12 of them. Like I said, ridiculous. I caramelized yellow (not brown) onions the old-fashioned way by sweating them at the lowest stove top setting for an hour, then browning them for another 20 minutes or so. I could not believe how sweet they got. (Shortcut caramelizing is lame.) 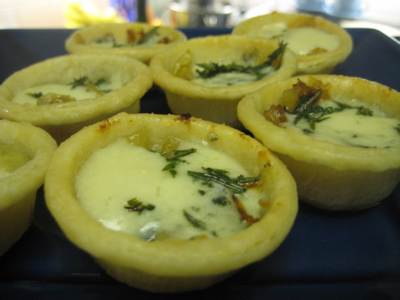 We ate some of the cheese alone, straight off the block. It’s really very good. Not too dry and pretty pungent, but not overwhelmingly so. It was more moist and not as crumbly as other blue cheeses tend to be sometimes.

The tartlets were gone in 6 minutes. What more can I say?