I Came, I Saugatucked, I Conquered
Redding/Weston/Easton, 6.9 miles, with King Whistle and Abacus
December 9, 2007

2018 Update: The Saugatuck Trail has been extended around the northern end of the Saugatuck Reservoir and connects to the Aspetuck Trail in Easton. So this page will need to be revisited at some point. Let’s call this page the “West” section.

Being the erudite strapping young buck that I am, I’ve never had need for Internet dating. Oh sure, I’ve poked around in the past looking for anyone I knew online in order to make fun of them, but that was before it became such a commonplace – and arguably successful – industry. However, now that CTMQ is widely known and read by various New England hiking circles, I will be in position to Internet hike-date, so to speak. In fact, I’ve solicited it as most of these trails are point-to-point and require two cars. My wonderful wife can only take so much of this nonsense. 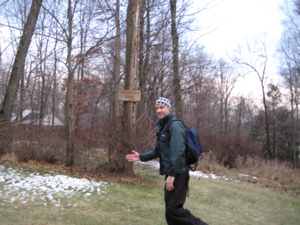 And so it was, I met a fellow Connecticut 400 (aka CFPA Blue Trails Challenge) traveler named King Whistle via email. (“Trail names are commonplace in hiking circles. It’s corny at first, but you get used to it.”) After checking psychopath credentials on each other (both married with kids, have stable employment, and the clincher – we both drive Volkswagens), we set a date for our hike. As King Whistle wrote, “You and I may be the only people willing to drive [all the way out to Redding] for a 7 mile hike.” 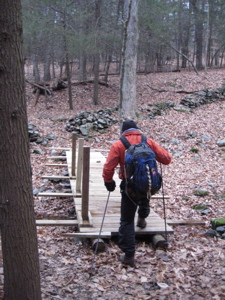 Yeah, that may be true, but let the record show that the King is ten times worse than I am when it comes to this CT-400 project. He feels the need to hike each and every inch of every trail described in the CFPA CT Walk Books. While admirable, that’s a bit insane; or as King’s first email to me was headed, “OCD is Me!” I plan on doing much the same over the coming years, but for some places it’s just not practical.

Then again, maybe he has more time because he’s not obsessed with hitting hundreds of museums. Hmmmm. Anyway, King invited along another friend, Abacus. We were to meet at 7:30 AM at the southern trailhead – which meant waking up around 5:45 or so for both of us. (We both have toddlers; so this is not a problem, even on a Sunday.) My drive westward was uneventful except for the tourbus load of 40 or folks in the random Southington Starbucks at 6:15 in the morning. Fortunately, they let me ahead of them for some much appreciated caffeine. 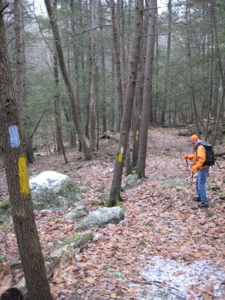 I hadn’t really studied the map to the trailhead as well as I should have, which resulted in a few inefficient route choices. And yet, with a lead foot and good driving skills, I wound my way along the Saugatuck Reservoir to find the other two guys waiting for me, not more than 3 minutes “late.” We drove back north to the other end and noted that the trail crossed the road about seven times. “No biggie, we’ll always know where we are at least.” 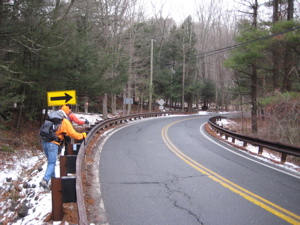 Introductions were quick and we immediately hit it off. They “got” my sarcasm and I got theirs; this was going to be a fun hike. One that we were lucky to be able to do. For you see, this is Fairfield county and it’s a beautiful area – this land is worth billions. The former Bridgeport Hydraulic Company (now called Aquarion Water Company), The Nature Conservancy, Aspetuck Land Trust, and other smaller groups have worked in conjunction with each other to pull off one of the greatest land preservation acts in the history of Connecticut. 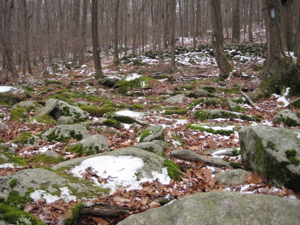 Governor Jodi Rell announced the designation of the Centennial Watershed State Forest, of which Saugatuck Reservoir is a part. Real estate developers must have cried and pounded their fists once they learned this land would never be developed. It’s an amazing accomplishment given that developers have been tearing up beautiful spots and throwing up sub-divisions and condos at an astounding rate…usually with total disregard to the environment. Consider the fact that million dollar homes have become the near norm in this part of the state and it’s not hard to imagine that a handful of folks could have made an obscene amount of cash. 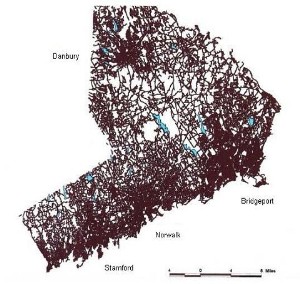 This map illustrates in great detail how much humankind dominates this part of the state. (Photo is courtesy of The Nature Conservancy) That’s the Saugatuck Reservoir there in the middle.

Last of the boring facts: This is the state’s largest open space acquisition in history and it’s also the first new state forest designated in more than 30 years. So there. Oh, one more: The Saugatuck is was, at the time of this writing, the newest of all the trails that makeup the blue-blazed system in the state. I’ll throw in another one I just made up: The Saugatuck has the most Port-a-Potties of any trail in all of New England. Prove me wrong, nay-sayers, prove me wrong. 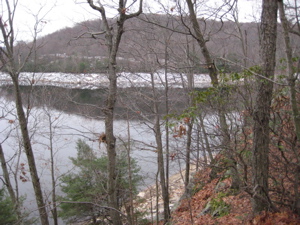 On to the actual hike! We began in a residential neighborhood, walking right in between two not-too-big-but-you-know-still-a-million-bucks houses on a somewhat poorly marked access trail. Early season snows had all but melted away, so that wasn’t a factor. Though if it were, I can assure you my hiking partners would have had ten times the fun! 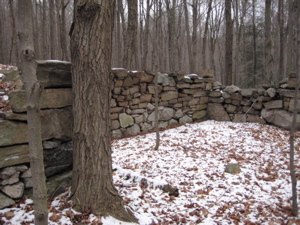 I was immediately indoctrinated into their secret world of enjoying the foibles of the other. They’ve worked out a rather complicated yet elegant “points system” for various types of falls along a hike. I was assured, “This came about only after days upon days, hours upon hours of hiking with the same person.” I was impressed to say the least – then learned that Abacus is an auditor for a very large organization so this type of scoring system was probably his ultimate day-dream come to fruition. 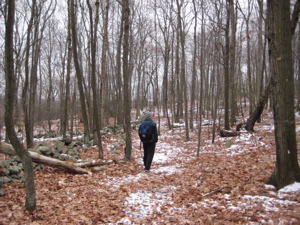 We all got to know each other better during the first couple miles, and our paces seemed to match up well. There was one short road walk section of maybe 200 yards, tops, crossing the Saugatuck River. It did, however, take in a shoulderless stretch of potentially icy curving asphalt. Just our luck that a massive state snowplow came barreling around the corner while we were there. Alas, we survived. 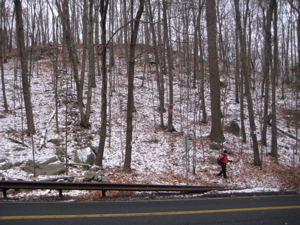 Although, if we were attempting this a couple months later, I’m not so sure. A large majority of the Saugatuck is closed from February to July. Turns out, Goshawks nest there and goshawks hate humans. And the threat is very real; I read up on it and they do indeed dive bomb humans and attempt to scalp them. 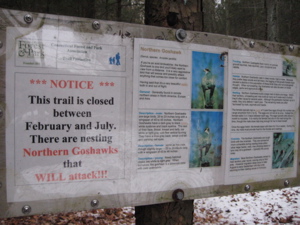 Of course we all agreed that we’d like to see that happen – to another member of the party, but alas, we were two months ahead of the goshawk kamikaze season, so we trudged onward along Crook Brook at first and then southeast towards the Saugatuck Reservoir.

At one point along this stretch, we stopped to take in the view of the Saugatuck River on its way towards the Reservoir. “Ah, that’s nice,” we all agreed. Here is that view: 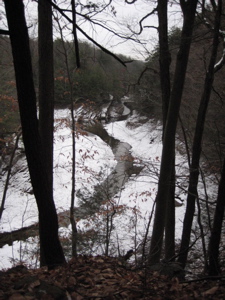 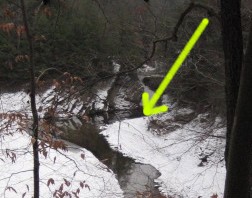 Are you blind? That’s a fox and we all saw it just before it trotted away. I didn’t even know he was in my viewfinder when I snapped the shot. The next few miles paralleled the shoreline and afforded a few decent views but honestly, nothing too spectacular. At least that allowed the three of us to compare hiking notes and talk about some of the mountains we’ve each climbed before. For me, that is always fun to do – to meet people with the same narrow interest with very good memories.

These are the same people who also think it’s hilarious when I get my foot stuck between two rocks; and then run over, steal my camera, and take a picture of me before offering any assistance. Good stuff: 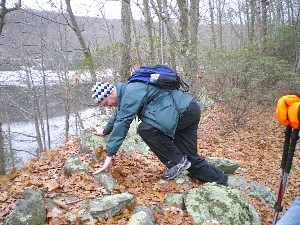 The trail itself is never too challenging at all with barely memorable ups and downs. All the road crossings really didn’t take away from the experience, which we all found surprising. We did encounter one other couple all day and aside from the slightly disconcerting barrage of gun shots we heard for the last mile or two, it was a very pleasant day out in the woods. 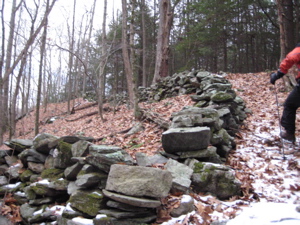 We even found time to discuss how old each of us thought a particular stone foundation was… I insisted it is very recent, maybe built as a project of some sort since it was so “crisp” and even. King Whistle (who happens to whistle very, very well, by the way) thought it may be a bit older, but we’ve yet to find out. 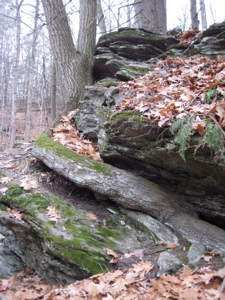 Towards the end of the hike, we began discussing possible future hikes. Apparently this Internet dating thing isn’t too sketchy after all. Fittingly, there was another Port-a-Potty at the southern terminus at which King Whistle posed for this handsome picture: 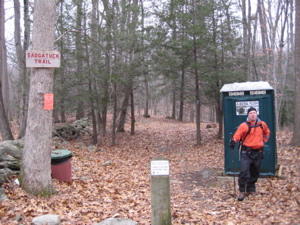 I figure that the whole trail is pretty much on the watershed into the Reservoir so they are trying to limit the amount of Nitrates that leech into it. But who knows. King Whistle drove me to my car and had to take off to a family event across the state. Abacus, too, had prior commitments but I drove north to complete the Lillinonah Trail up in Newtown before calling it a day. 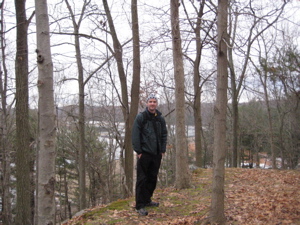