You won’t believe this, but this property took me three visits to complete all of its trails. Three! Add a fourth visit to check out the “Large-scale Wintonbury Flying Club Fly-in” and I’m basically a Seabury regular. 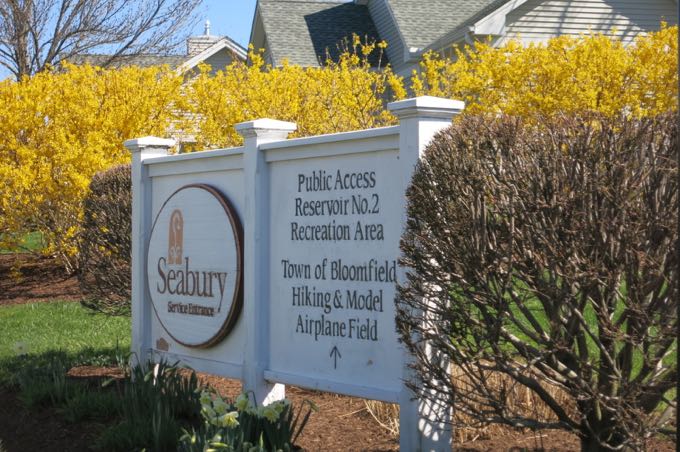 The location, known as Reservoir #2, is state land leased to Bloomfield for passive recreation. The land was formerly the home of A.C. Peterson Dairy until the State acquired it for flood control purposes. There is a long dike here and while the state’s flood control system around Bloomfield confuses me, I’m sure it makes sense to engineers somehow.

The coolest part of the trails here is that they were developed and are maintained by residents of the Seabury Active Life Community. The trails, begun in 2006, are still a work-in-progress. In the five year interim between my visits, several trails were added. I don’t see much opportunity for the “Active Life Community” (Read: retired folks who like to clear brush) to add much more beyond 2020, but who knows.

Back in 2015 with both boys, we didn’t get very far. I stuck to the main trail nearest the open fields surrounding the model airplane area. Damian was being difficult, which led to Calvin getting frustrated, which resulted in a not-so-great start. 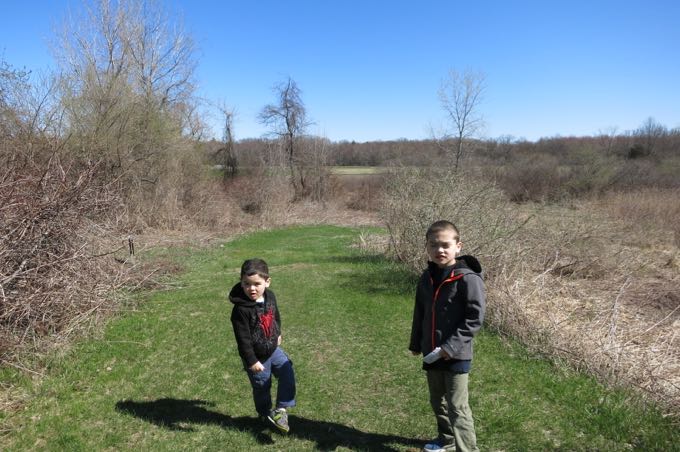 We found finely constructed bridges and benches throughout the property and it’s totally worth walking around here. Unfortunately for us, as we made our way around the large field and towards the woods, we were confronted with a very loud, very angry, very untethered, very large Rottweiler. Greeeeeat. 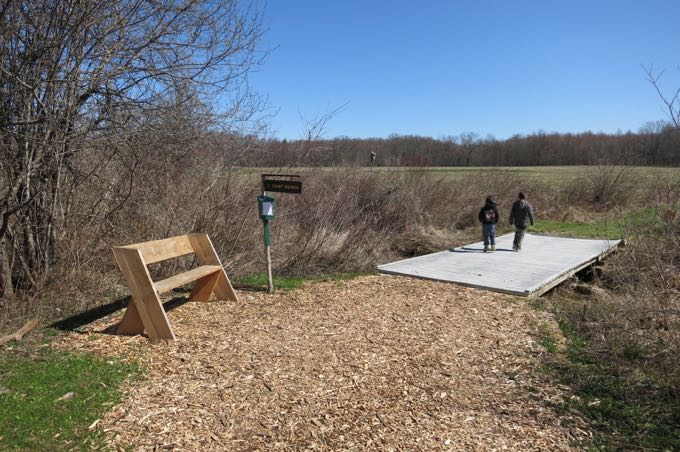 That dog could literally eat my barely-four-year-old. I did not see any owner at all. We turned tail and called it a day – not realizing I wouldn’t return for five years. But I was happy regardless, mainly because we got to see this little guy: 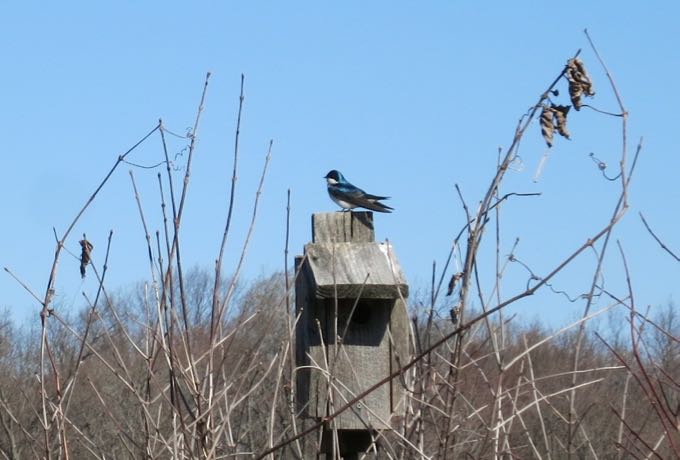 Then there was this little guy, who decided he’d take a nap in the warm April sunshine – one of the first days it was available in 2015. 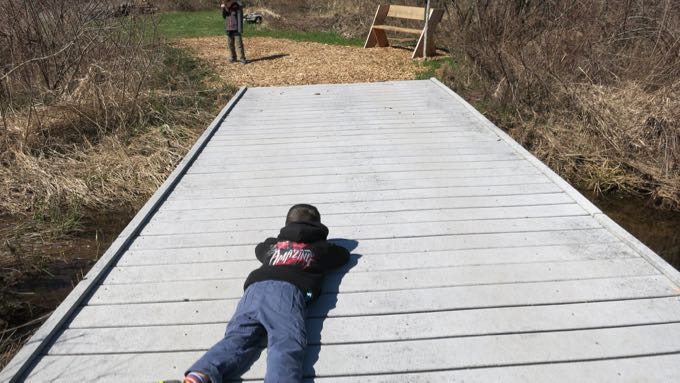 No, Calvin, you can’t take a nap here.

It would be awesome if… let’s say you’re reading this in 2023 or so and the COVID-19 pandemic is a distant memory. Sigh. As I write this, we are in that period of time when we were all in isolation.

This meant that Calvin’s soccer practices and games were shelved – which meant that I was to somehow become coach, teammate, mentor, teacher, opponent – every day. Calvin is very good at soccer and that’s fun, but it gets a bit repetitive for me. (He’s also getting better than me, which is interesting.) 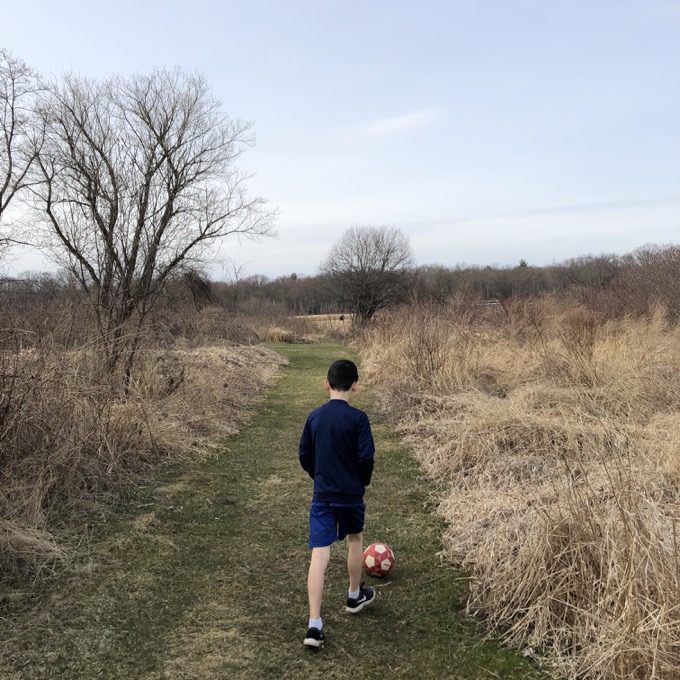 So I decided to spice up his training with a hike. A soccer hike! Calvin was skeptical at first, but once we got going, he had a blast. (Of course this doesn’t work everywhere, but having been to Seabury in 2015, I had a pretty good idea it would be fun here.) If you don’t understand, we walked the trails here while dribbling, passing, and kicking a soccer ball. 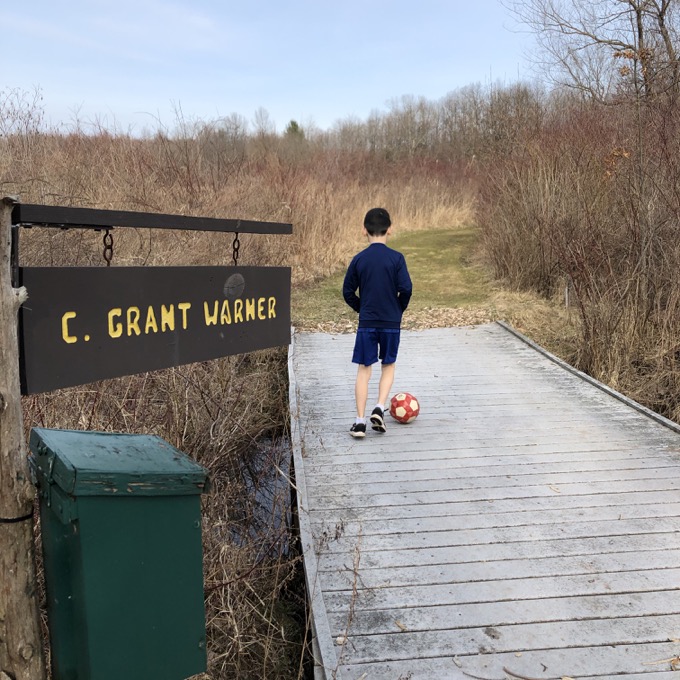 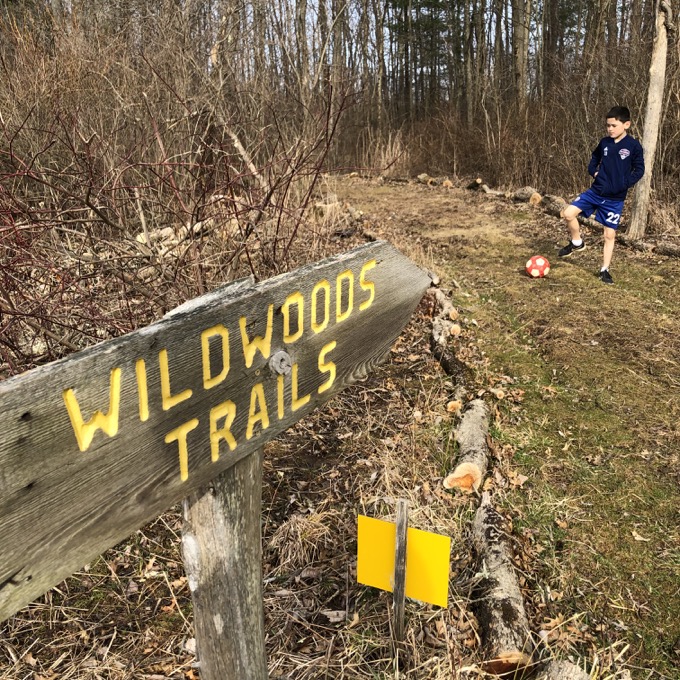 That’s it. Of course, I suppose it requires some skill to keep the ball “on trail” as it were, but that also gets a bit boring after a while. We quickly made it to the spot we had to turn around due to the dog all those years ago, and were able to enter the woods.

There are several trails here, but to get the full flavor of the place, I suggest following our lead and hiking the yellow-blazed Wildwoods Trail. To circumnavigate the whole property, the Wildwoods Trail leads to the Pink Trail which leads to the mile-long dike back to the Seabury complex. More or less. 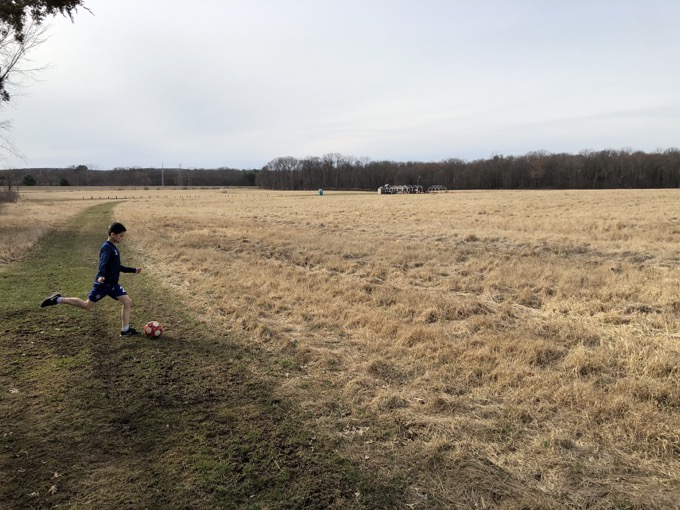 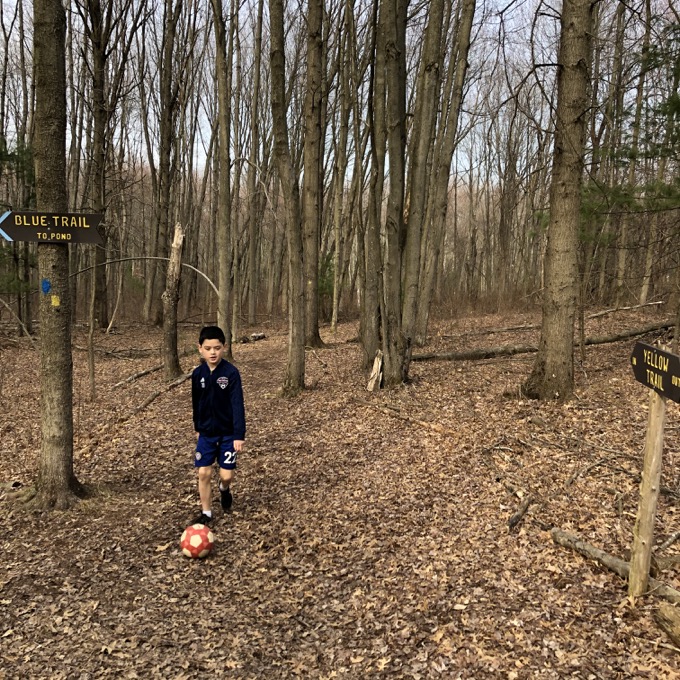 The whole loop is nearly 3 miles and entirely flat. So flat, in fact, you can dribble a soccer ball the whole way.

The trails here are impeccably maintained. Most of them are sort of bordered by logs and saplings. The retired folks here have nothing but time on their hands, so why not make super attractive trails? I certainly appreciated it.

One thing that often happens when trail maintainers have too much time on their hands and/or haven’t been property schooled in the art of trail maintenance is that they go a bit overboard on certain things. Things like trail blazing: 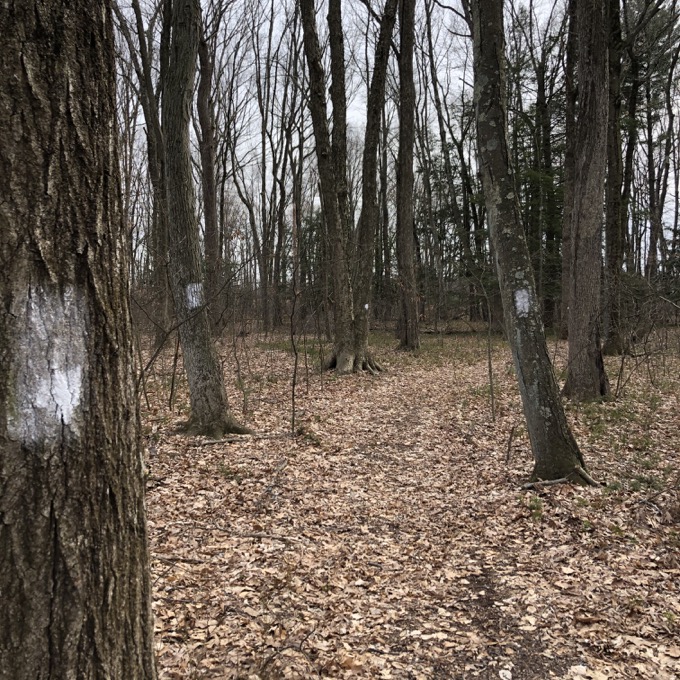 Slow down there White Paint Guy. Of course, this dynamic also means that the bridges at such a property are sturdy and overbuilt – although since the vast majority of those who walk these trails are Baby Boomers, it’s good to have wide and sturdy bridges. 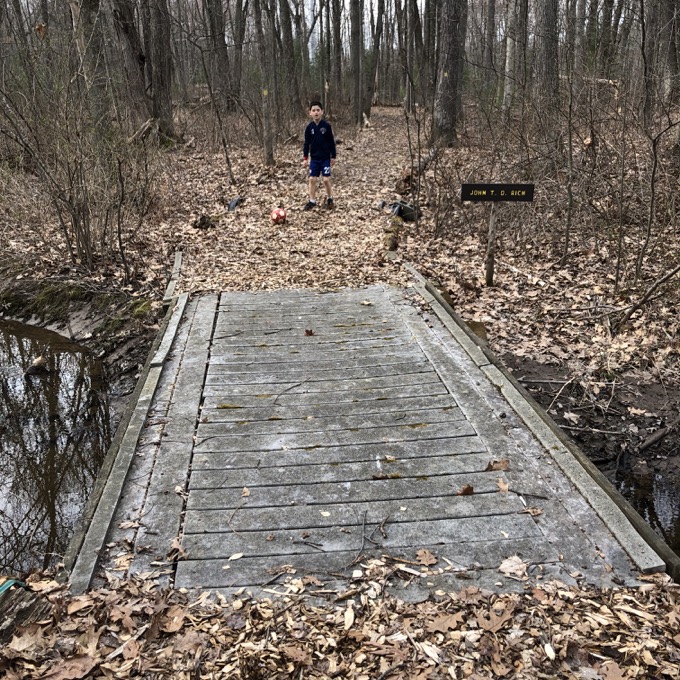 But you’d think the benches would be a tad more comfortable, eh? Perhaps the idea here with these things is to keep people moving. No resting! Get that exercise! 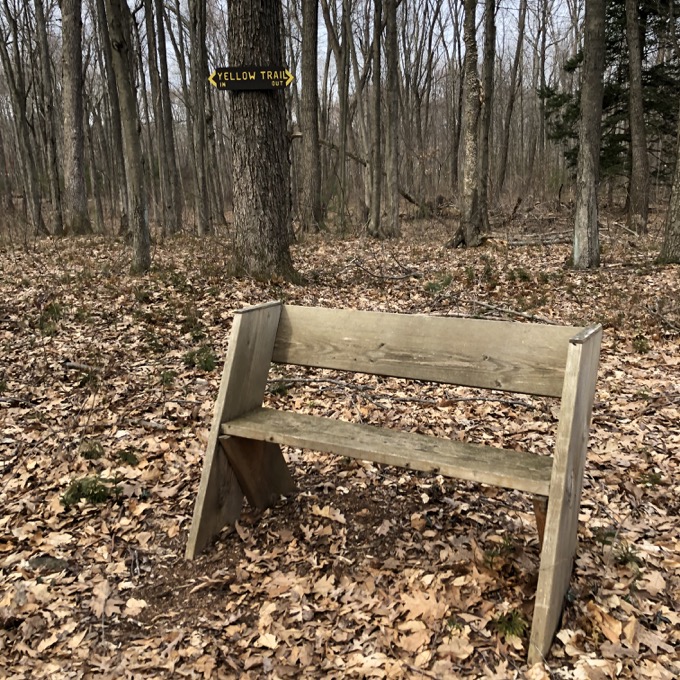 At the back of the fields there are some side trails that we quickly checked out. There’s some old farm equipment rotting in the woods here, as well as an old VW Beetle. 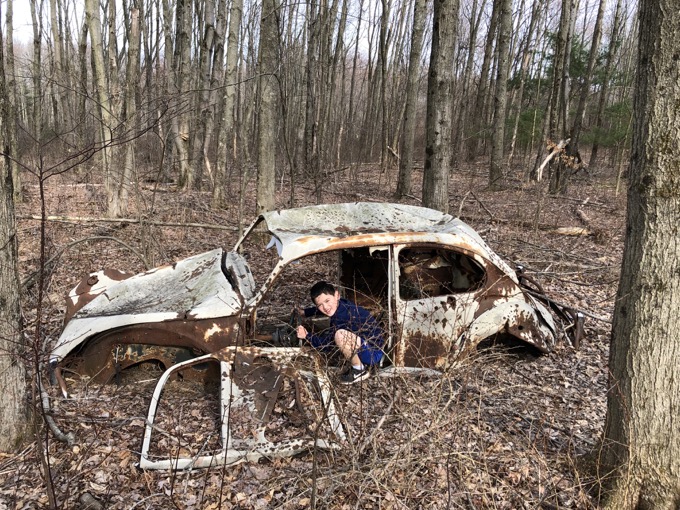 Back to the yellow trail and a new game was invented. Anytime the trail took a bend or intersected with another, Calvin would try to thread a pass through the trees to my feet. I invented the game, but I was terrible at it; kicking the ball directly into trees right in front of me.

Much to Calvin’s delight.

Then he’d try it and show me up every time. Every. Time. 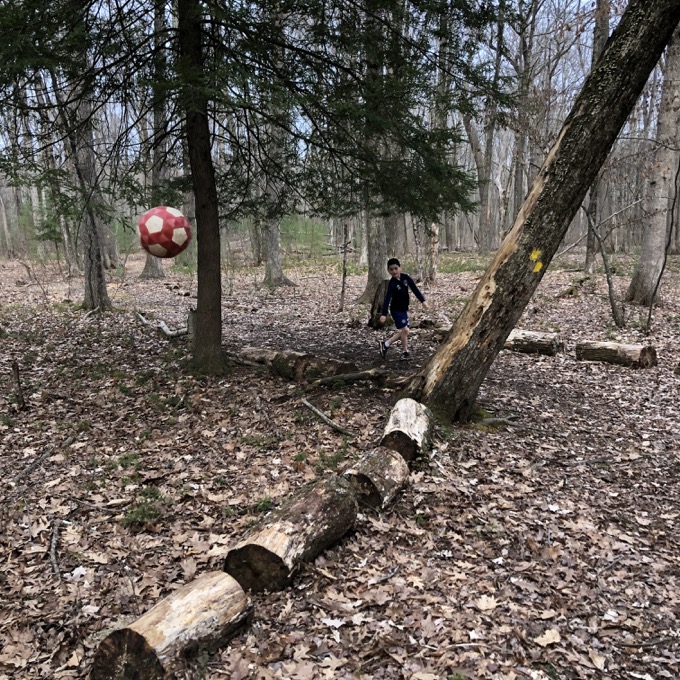 Threading the needle to put the pass right on my feet. The kid is good.

We reached the end of the Wildwoods Trail and began coursing west on the Pink Trail towards the dike. A man was cutting wood ahead of us as we made our way across a very wet area. Calvin kicked the ball on a slick mossy rock and took a digger, coming up with a look of shock on his face and a bloody gash on his leg. 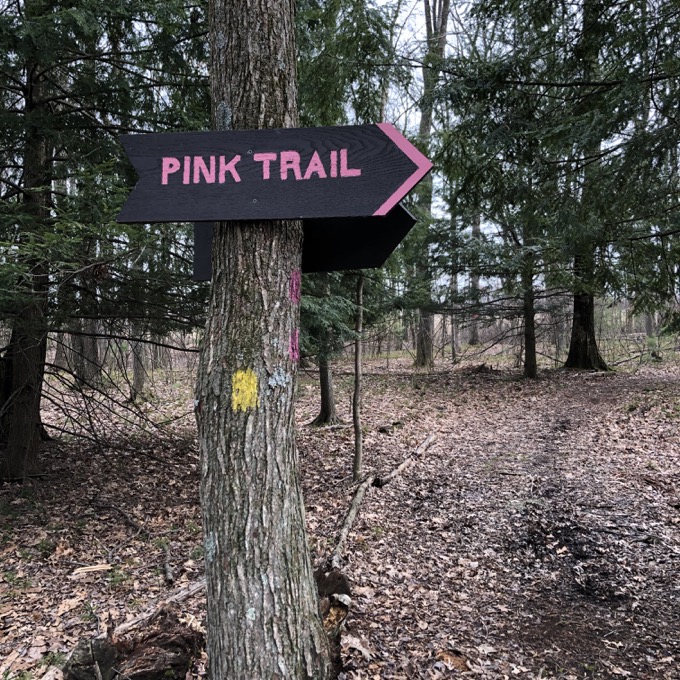 This was not ideal. We were as far from the car as possible and it appeared to me that he cut himself on one of the many rusty stakes in the ground. Great. We were able to take a short cut trail (with this amazing bridge!) 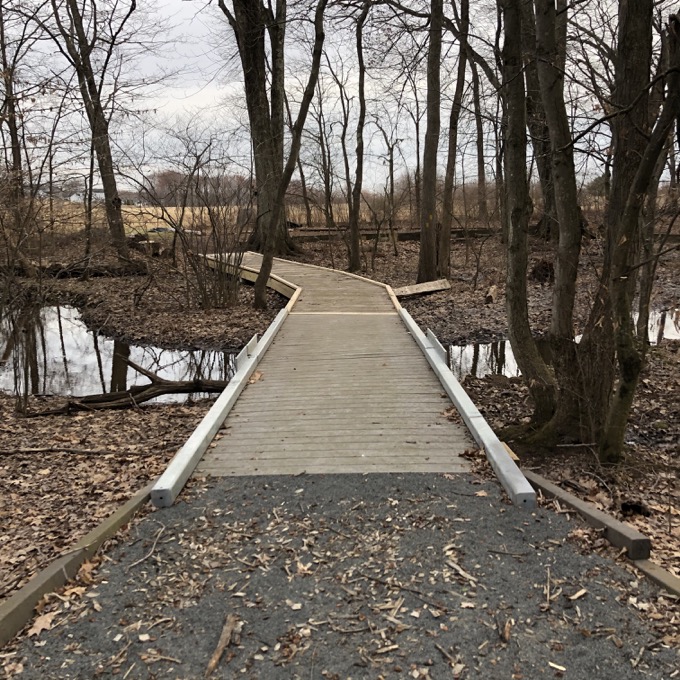 – and then scoot across the field and up to our car. The cut looked nasty and I was concerned about the tetanus. The last place I want to go during this global pandemic is to a doctor of any kind. I then realized Calvin is 8 and has had his series of tetanus shots and is fine. Just needed to get him home and get it cleaned up and that would be that.

That was also that for our soccer hike of Seabury. 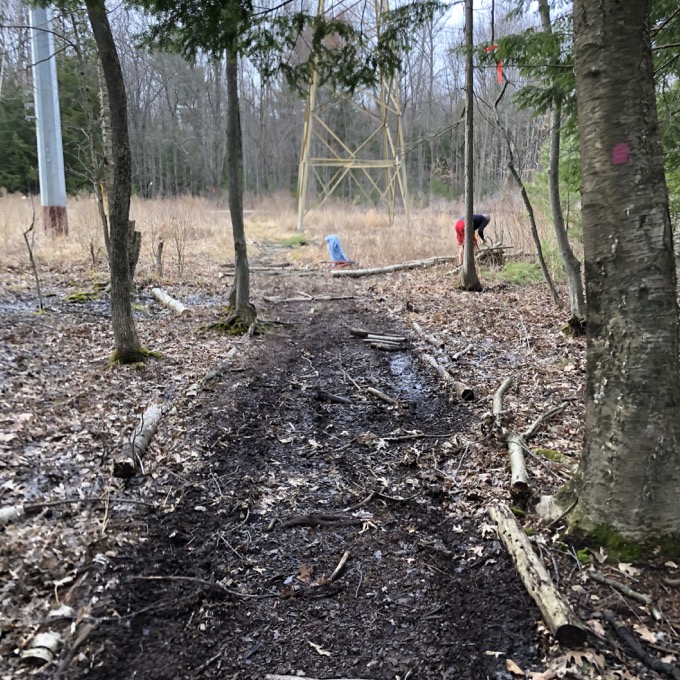 Calvin was fine, but I returned alone a few days later to finish up. Straight to the Pink Trail where our day ended in blood and fear. I sought out the metal post and decided that no way was it responsible for cutting my son. 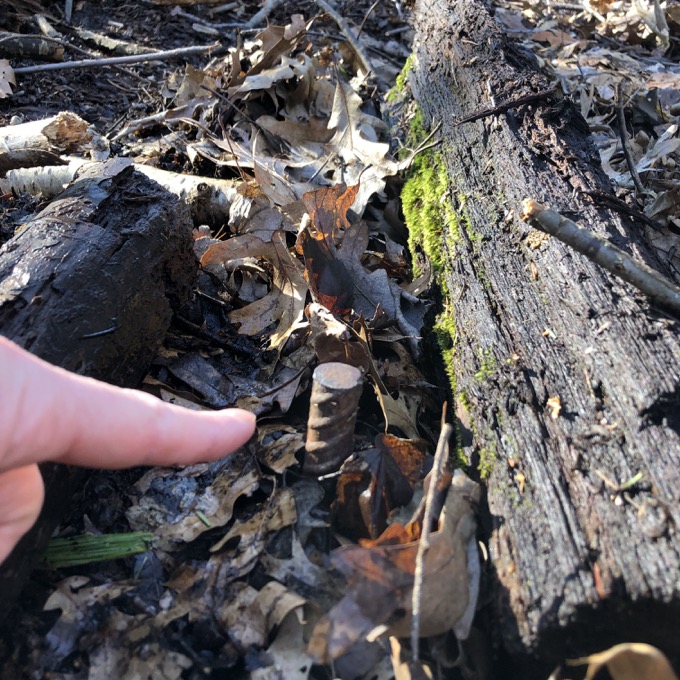 It was just too thick and dull to slice open a 3 inch gash. I also told myself this wasn’t rusty anyway, so all is well. But here’s the thing. I noticed a whole bunch of these old iron stakes throughout the property. These things are dangerous as they are totally camouflaged and can actually cause some damage. 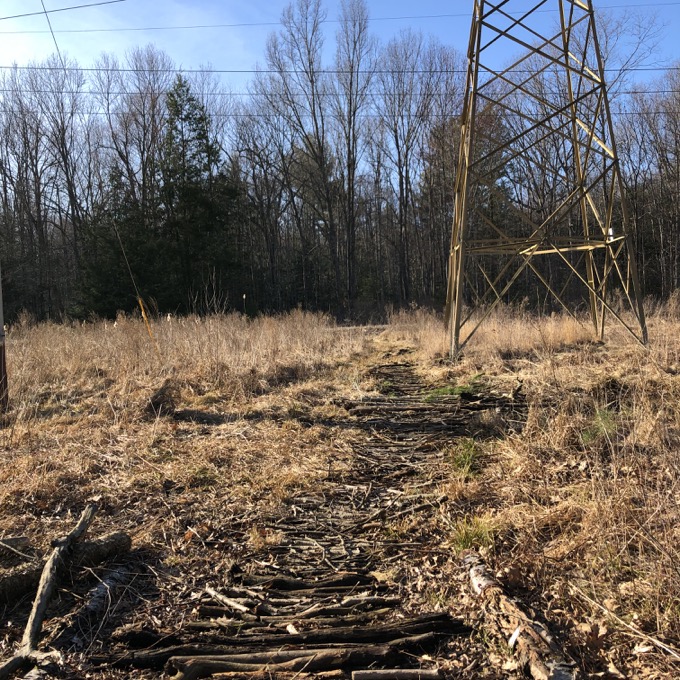 I suggest getting some blaze orange spraypaint and trying to find and paint them all. That sounds like a great project for the Seabury volunteers. As good, anyway, as the project the man we saw a few days prior did: Laying a thousand sticks and small logs across the sodden sections of trail.

It’s funny that I walked across his handiwork a few days after he laid it, but c’mon. Within a few weeks this type of remediation just sinks into the muck. Oh well, I appreciated it. And I appreciated this unexpected and rather massive bridge structure: 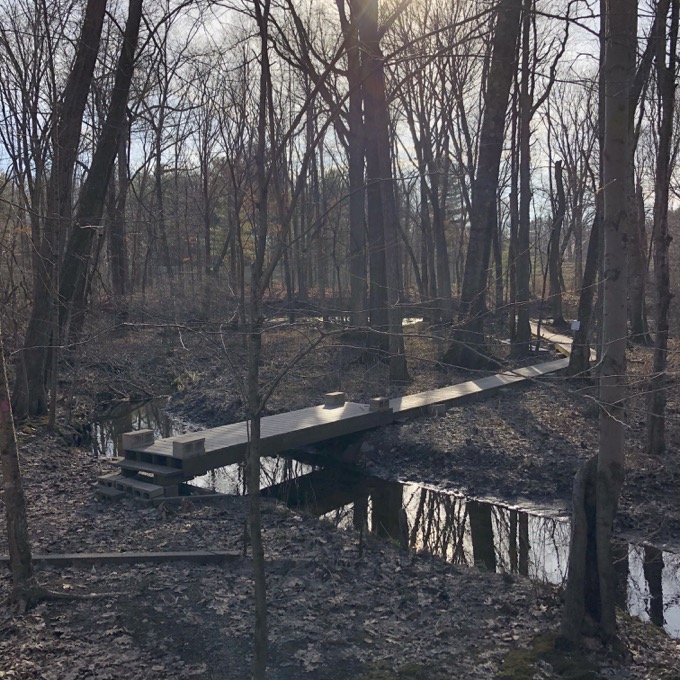 After that, it was a short walk through the woods to the dike. According to the trail guide, this is a mile long(!) I don’t think that’s accurate, but it is impressively long and straight. And I was impressively alone; super socially distant. Which was nice. 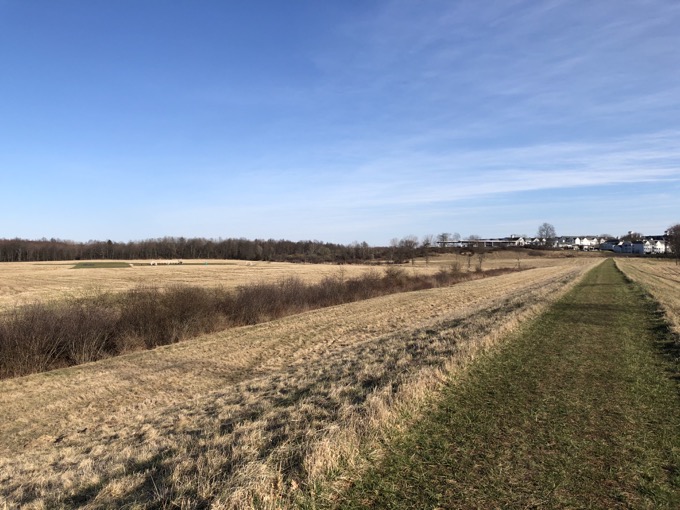 At the end of the long dike walk, I found a trail that seems to go into the heart of the Seabury complex. I wasn’t interested in it, but did walk over to check out this bit of trail art. 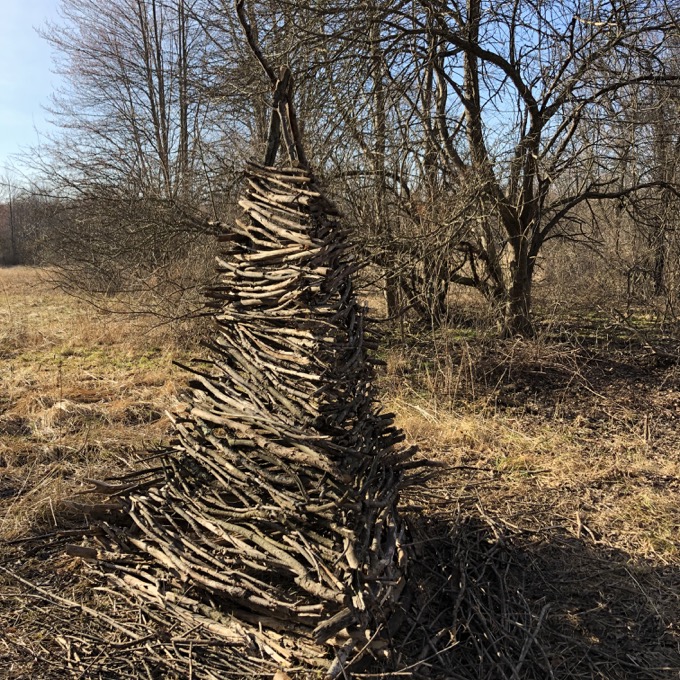 The person who made that is Bloomfield’s own version of Andy Goldsworthy! I found the trail that skirts the parking lots which took me back to the trailhead at the flying club’s access road. I passed an older gentleman snipping back shrubs on the trail and I thanked him for maintaining the place. 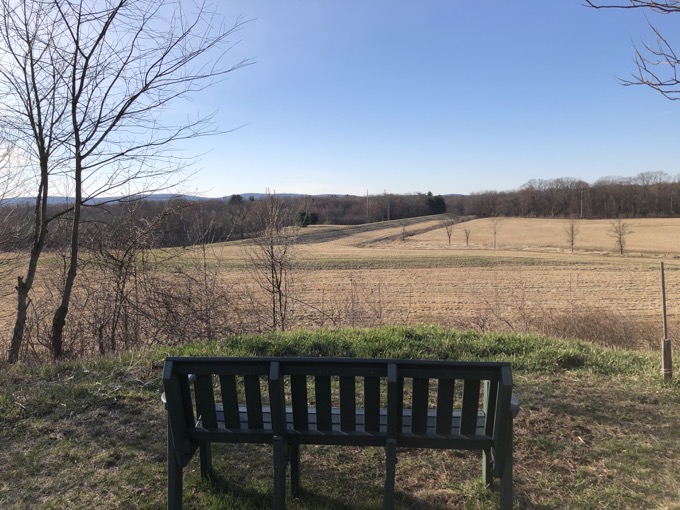 They have added a Meadowview Trail loop which takes walkers along the main entrance road through a meadow, with benches along the way. It’s much more pleasant than I just made it sound, and there always seems to be folks walking the path.

I was impressed with the trails here, at least relative to what they are. I have no plans to make a fourth return visit, but you would be well-served to check it out at least once. 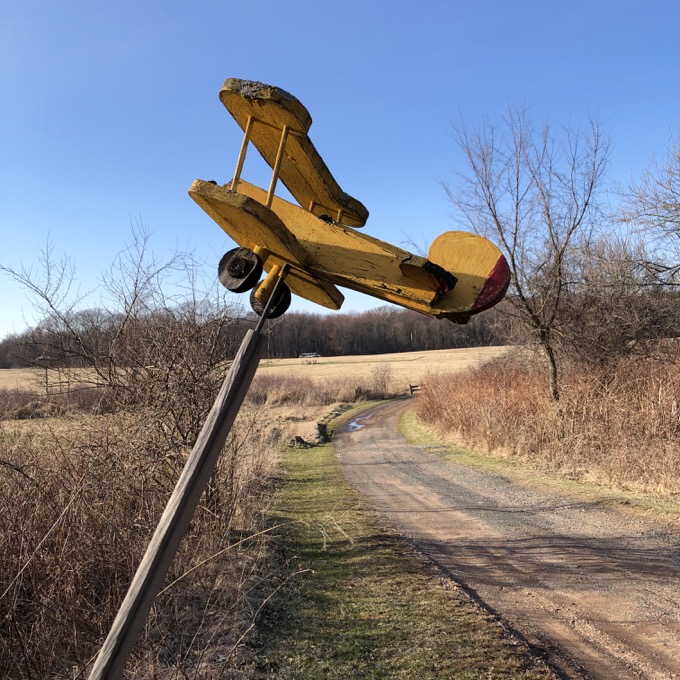