I went to the woods because I wished to live deliberately, to front only the essential facts of life, and see if I could not learn what it had to teach, and not, when I came to die, discover that I had not lived. 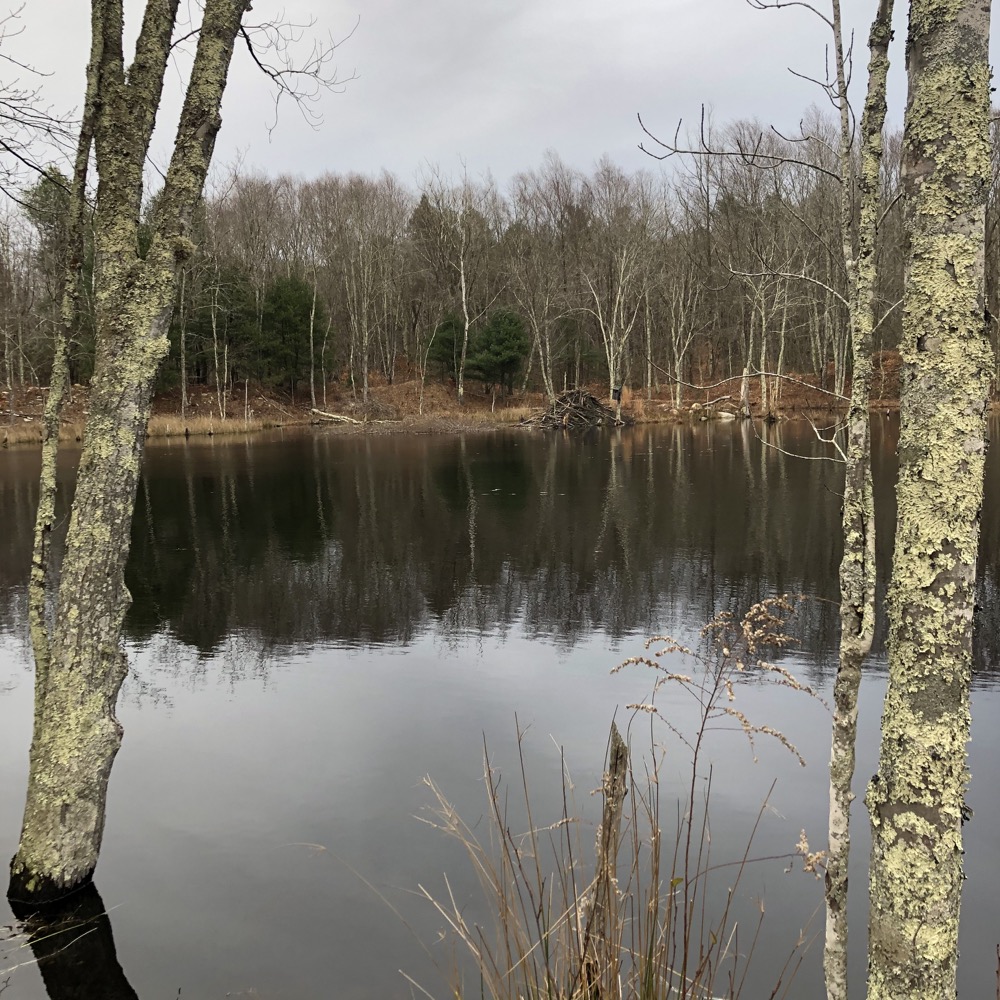 I loved hiking through this property. The weather wasn’t great and it came at the end of a long day for me, but I still loved every second of it. And I think I know why.

The trails provide a wide range of ecologies through which to walk. Fields, evergreens, laurel, swamps, ponds, and regular ol’ northeastern hardwood forests. The preserve is a success story of reclamation for sure, but I think I also loved it because I knew absolutely nothing about the Walden Preserve before setting out into it. 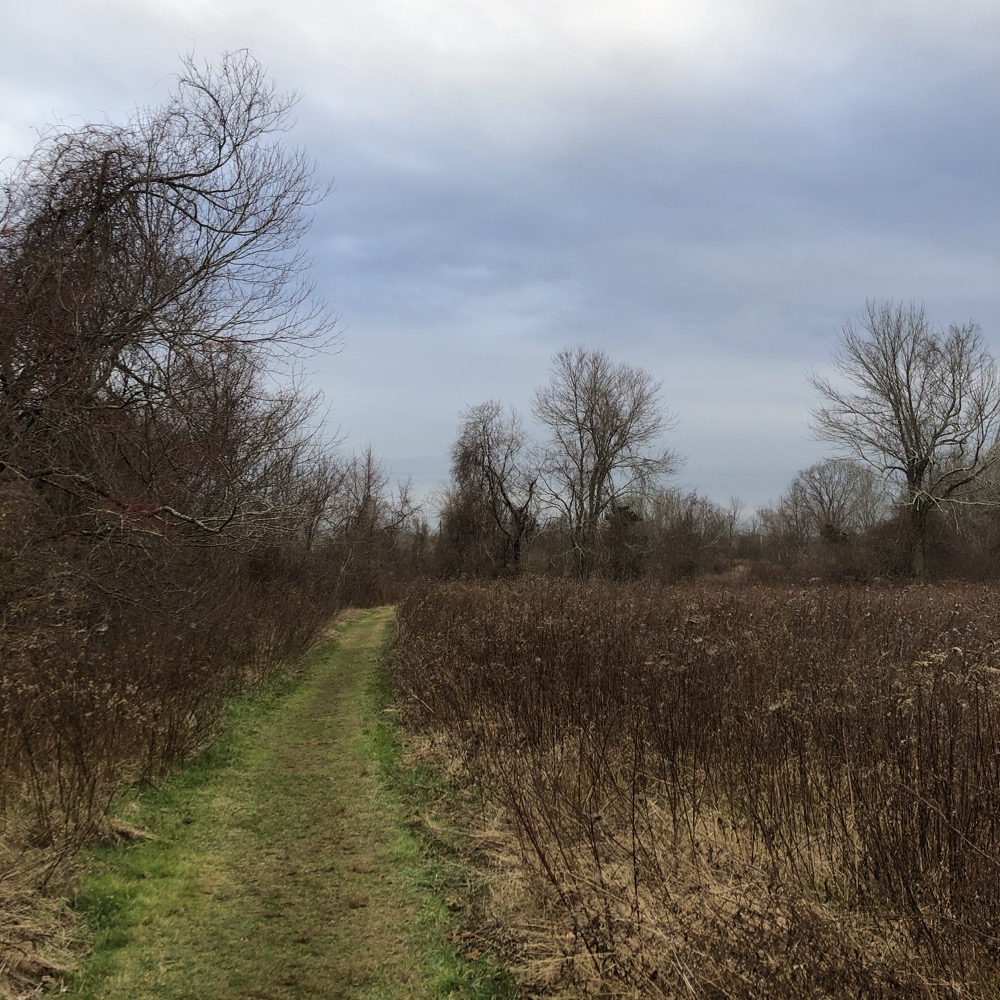 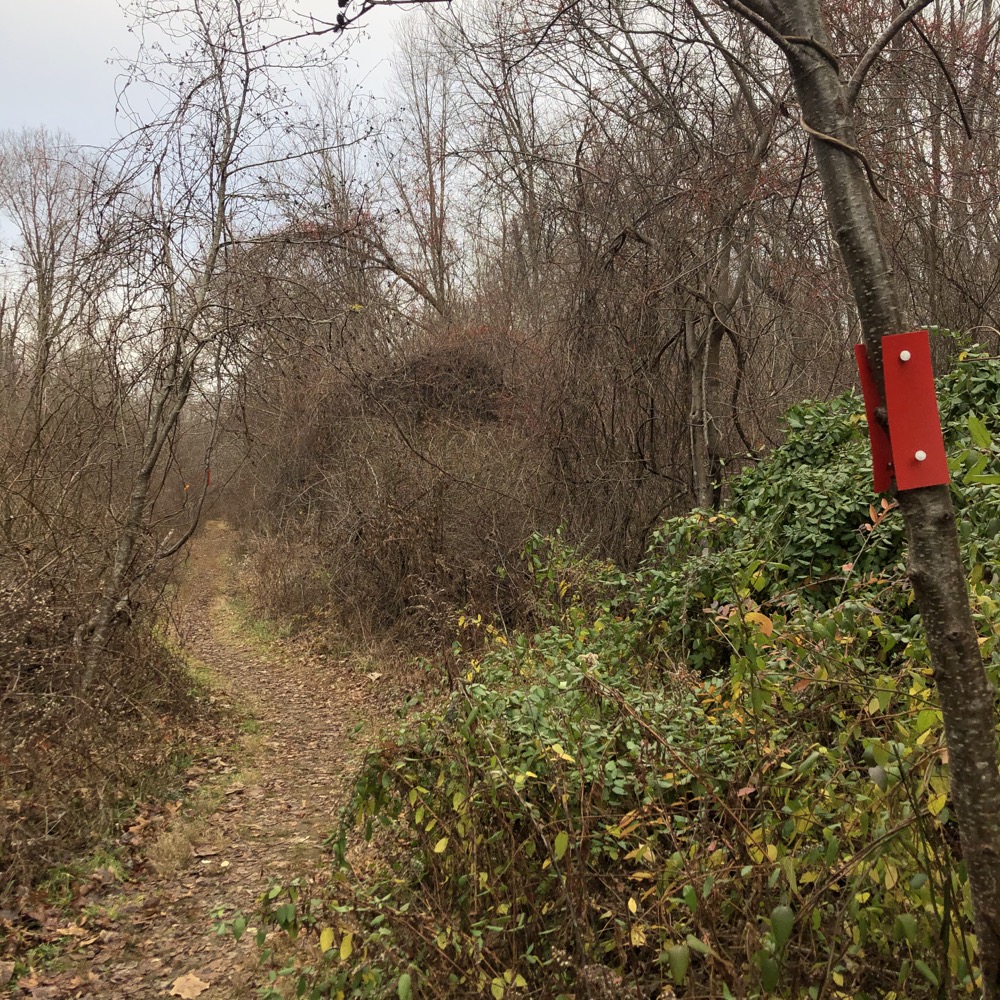 I hadn’t even planned on hiking it the day that I did. But after finishing up a hike over at Harris Brook, I realized it was only a few minute away. So I went for it, not expecting much of anything.

The Salem Land Trust stewards Walden Preserve for The Nature Conservancy, maintaining 6 miles of trails, selectively mowing the meadows for bird and butterfly habitat and controlling the spread of invasive species. The 400-acre property includes meadows, woodlands, and wetlands. Importantly, the confluence of Harris Brook and the East Branch of the Eightmile River is located on this property. Visitors are welcome to hike its trails, observe wildlife, and fish (catch-and release) in the Eightmile River and Harris Brook. 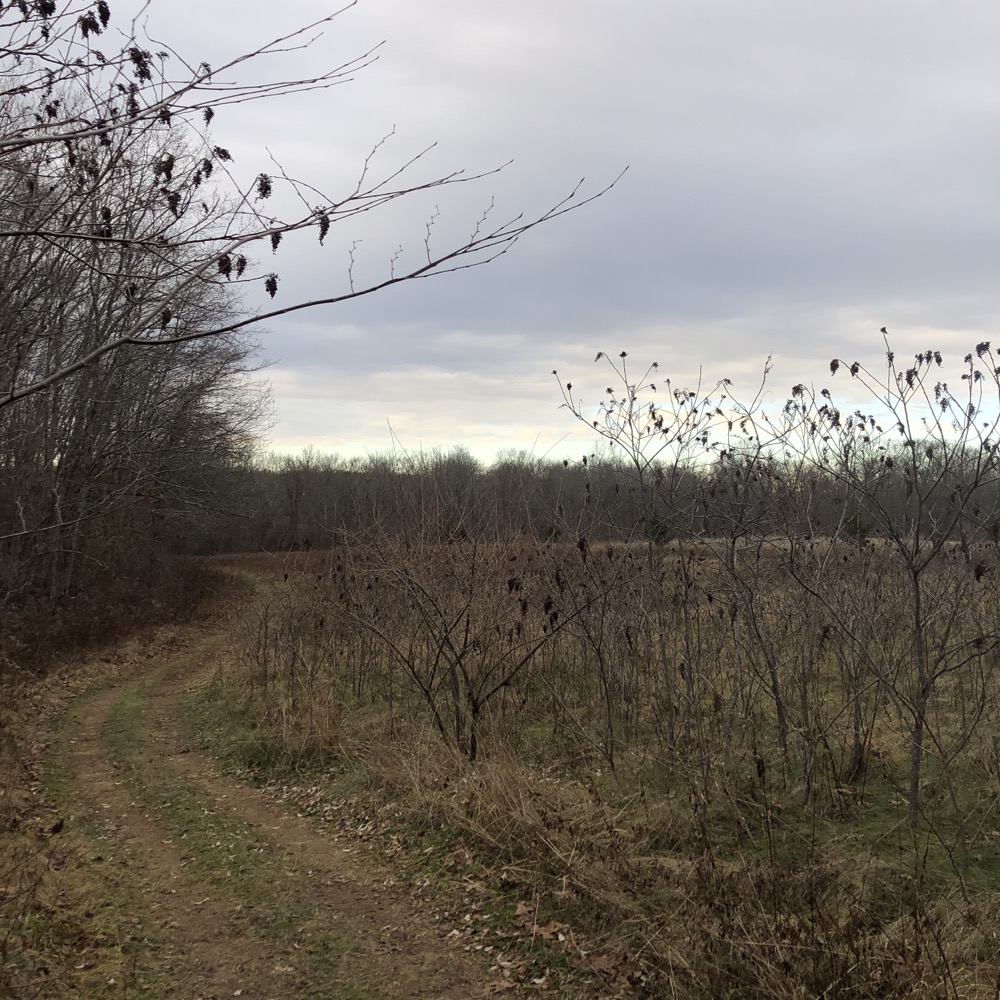 The parking area on Hagen Road is large, and it’s near the traffic circle and Fox Farm Brewery – the two town landmarks. I began walking through the fields along the red-blazed Sonny’s Trail. It is always hard to blaze field trails, so I can forgive the Salem Land Trust for my confusion at the outset. There are no trees, and maintaining posts with blazes is tedious. Besides, people can figure out where they are because they can usually see from whence they came.

I made it to the woods and the wide trail passed through bramble and brush and then got into a more woodsy setting. 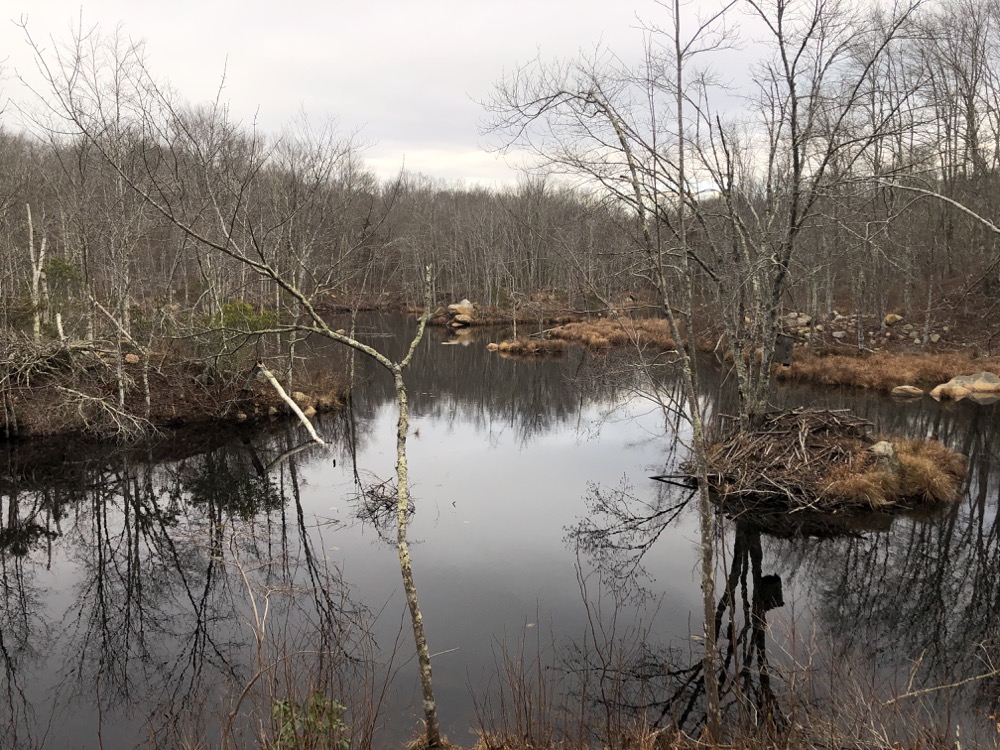 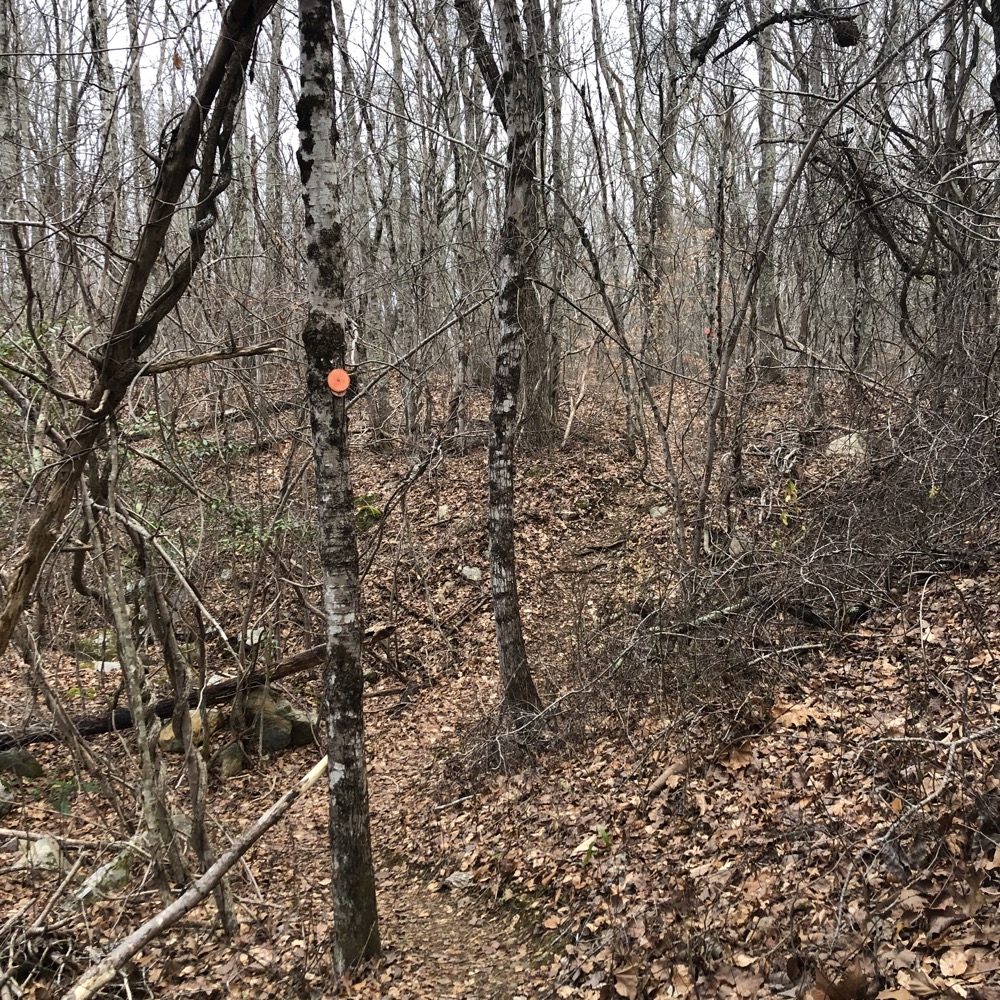 This property, with fields at both ends, was a beef cattle ranch in the the middle part of the 20th-century. Then it was bulldozed and dug up here and there by a sand and gravel company. There is evidence of this operation all over the place; most notably in the form of incongruous piles of sand and gravel.

In the development-happy 1980’s, the property was nearly turned into a subdivision. I don’t know why that didn’t happen, but the property was left to nature instead. There were no purposeful restoration efforts or anything here. Most of the trees here are young; much of the land having been denuded for the gravel concern. Somehow the Eight Mile River that courses through seems to be healthy enough. 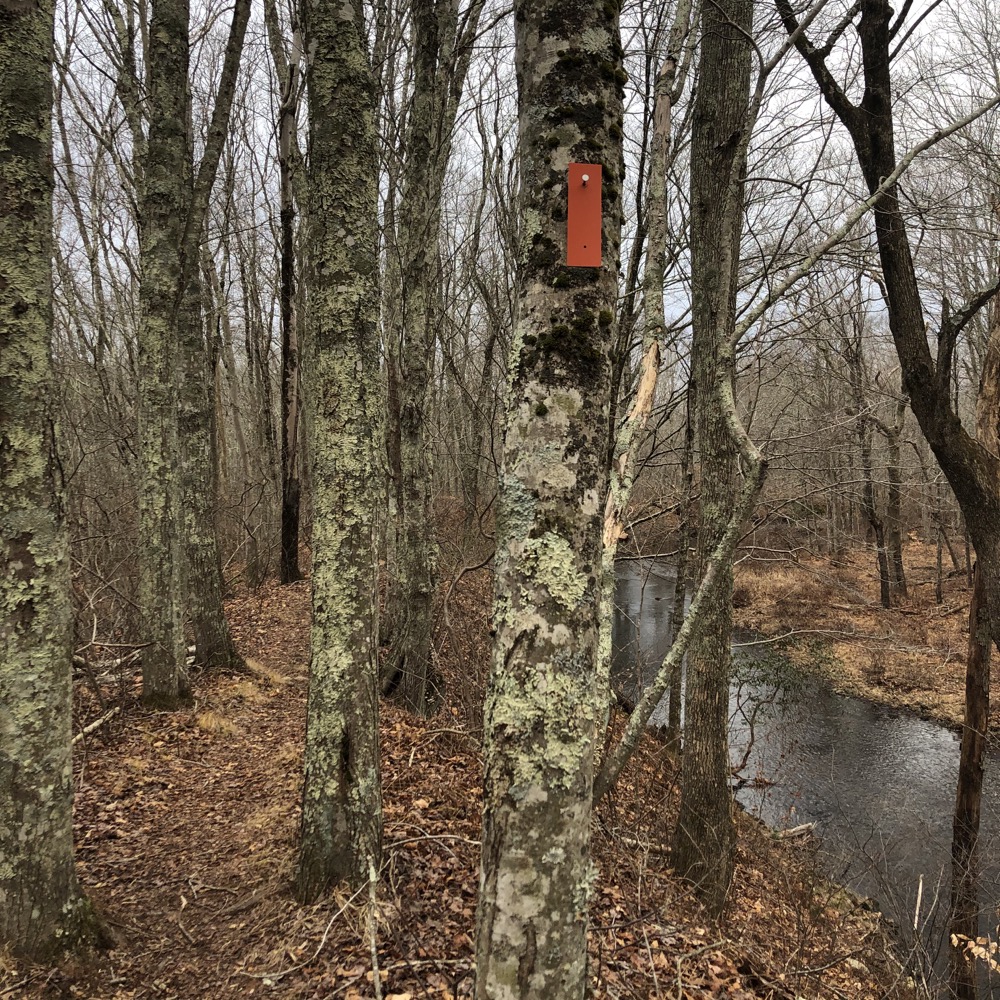 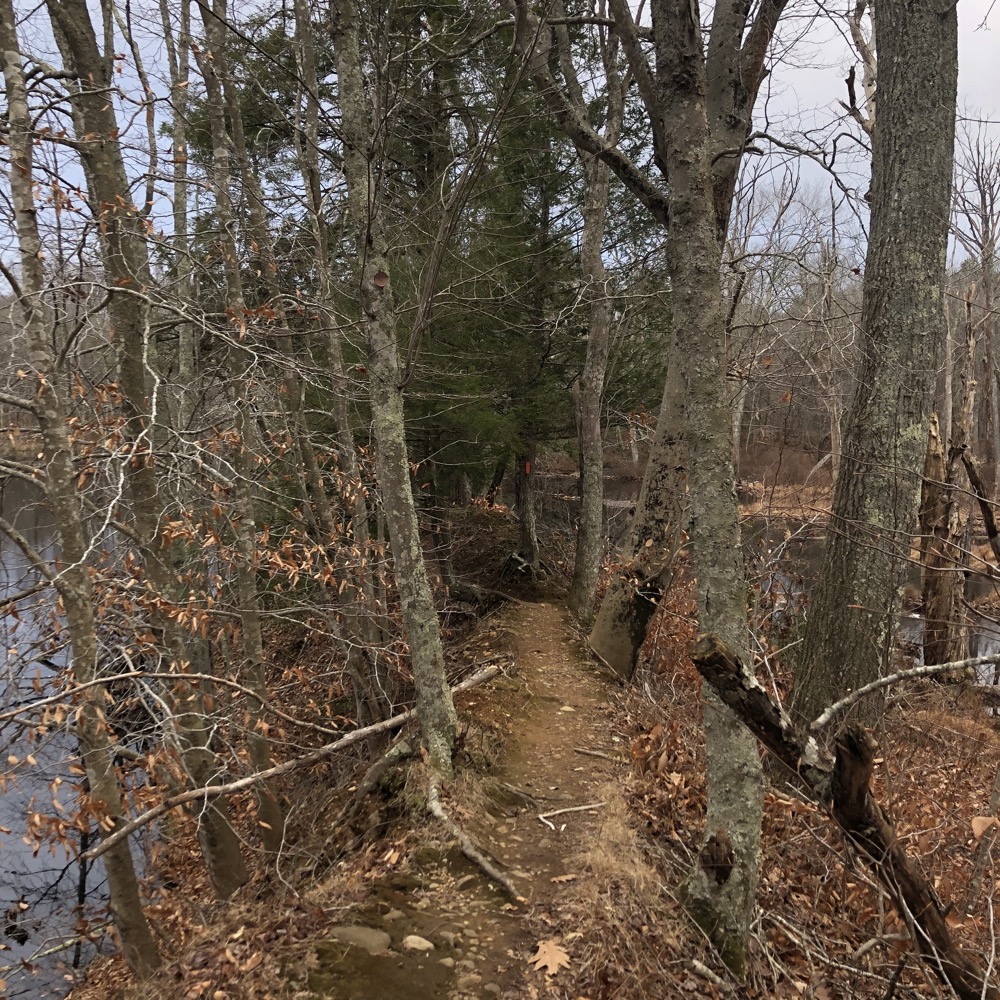 There are two ponds, the first of which I came upon is called Wood Duck Pond. All I could think was how pretty this must be in October. There’s a memorial stone here for a woman named Wendy Clark that simply says that she “loved this spot.” I’m with you, Wendy. I love it too. Rest in Peace.

I soon veered off onto the Knife Edge Trail. I can’t recall what I was thinking before walking the orange-blazed trail. I assume I was chuckling to myself about it. I’ve hiked the Knife Edge Trail on Katahdin in Maine. (If you’re not familiar with that trail, here are some pictures.) 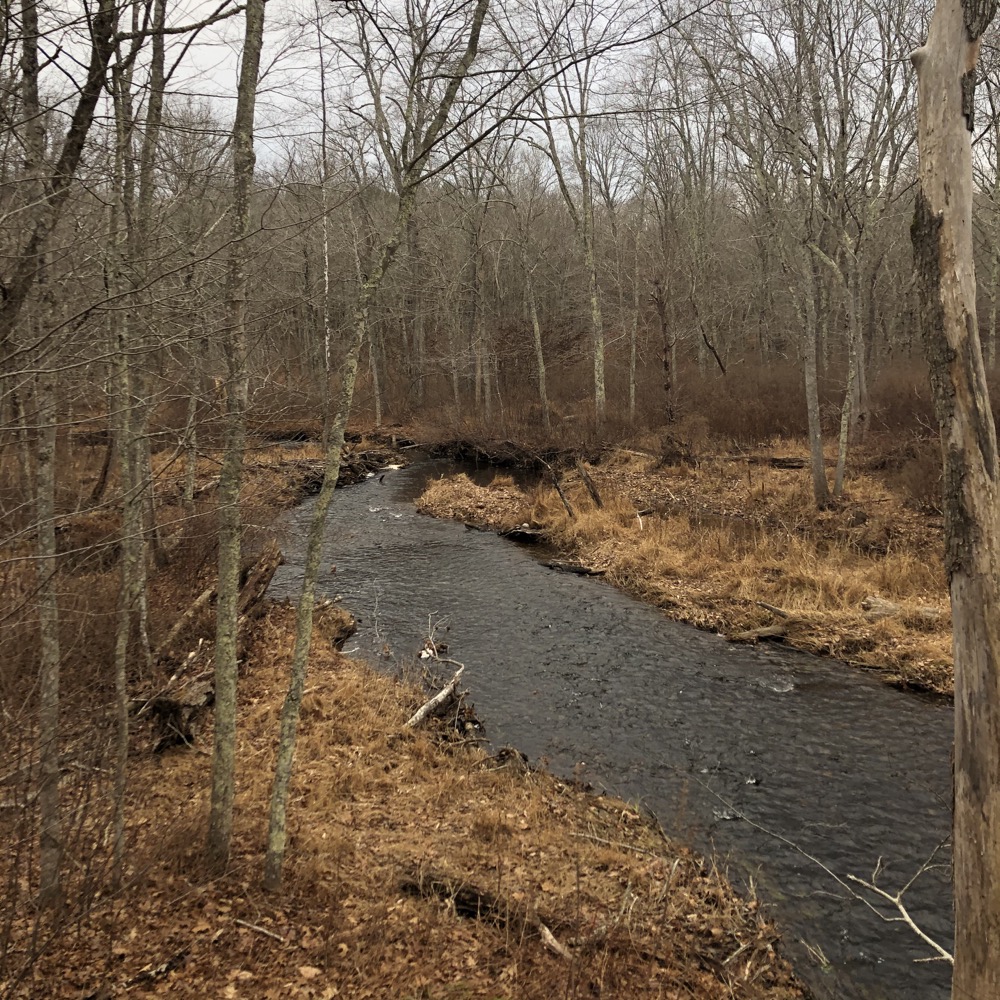 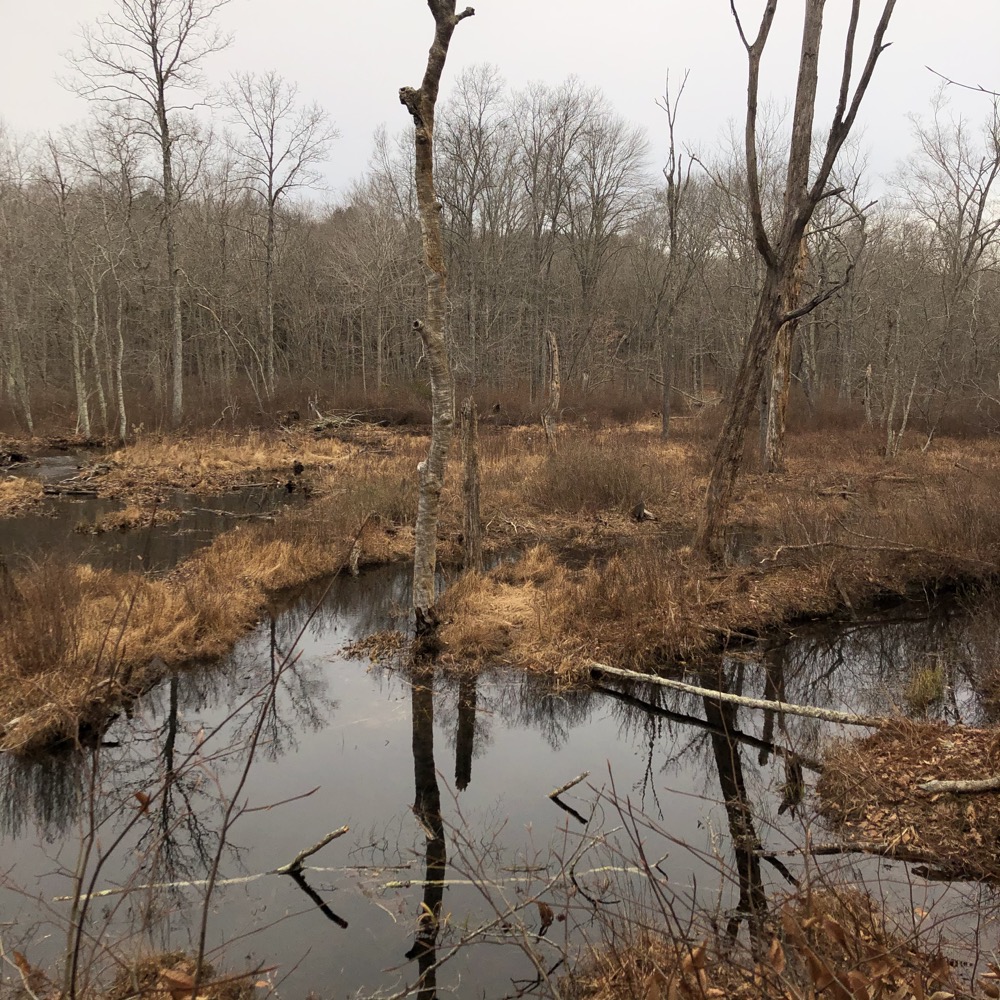 As it turns out, Salem’s Knife Edge Trail is not quite as thrilling or dangerous, but I absolutely loved it. I’m not sure how long it can last though, as beaver activity seems to be flooding more and more land here and sections of the trail are already just about underwater.

The “knife edge” here is a thing strip of land between the Eight Mile River and Turtle Pond. It’s fantastic and the fact that they’ve blazed a trail along this strip is nothing short of awesome. There really are areas where the trail is the only flat land with drops off both sides. Granted, those drops are just a few feet, but sometimes imagination is key when hiking. 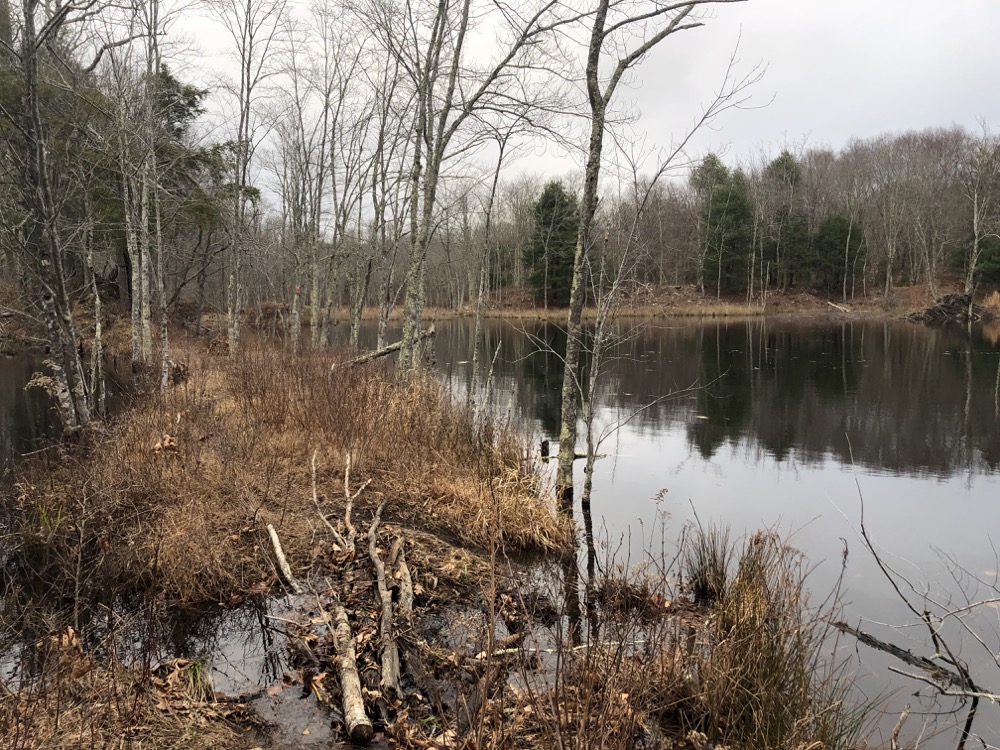 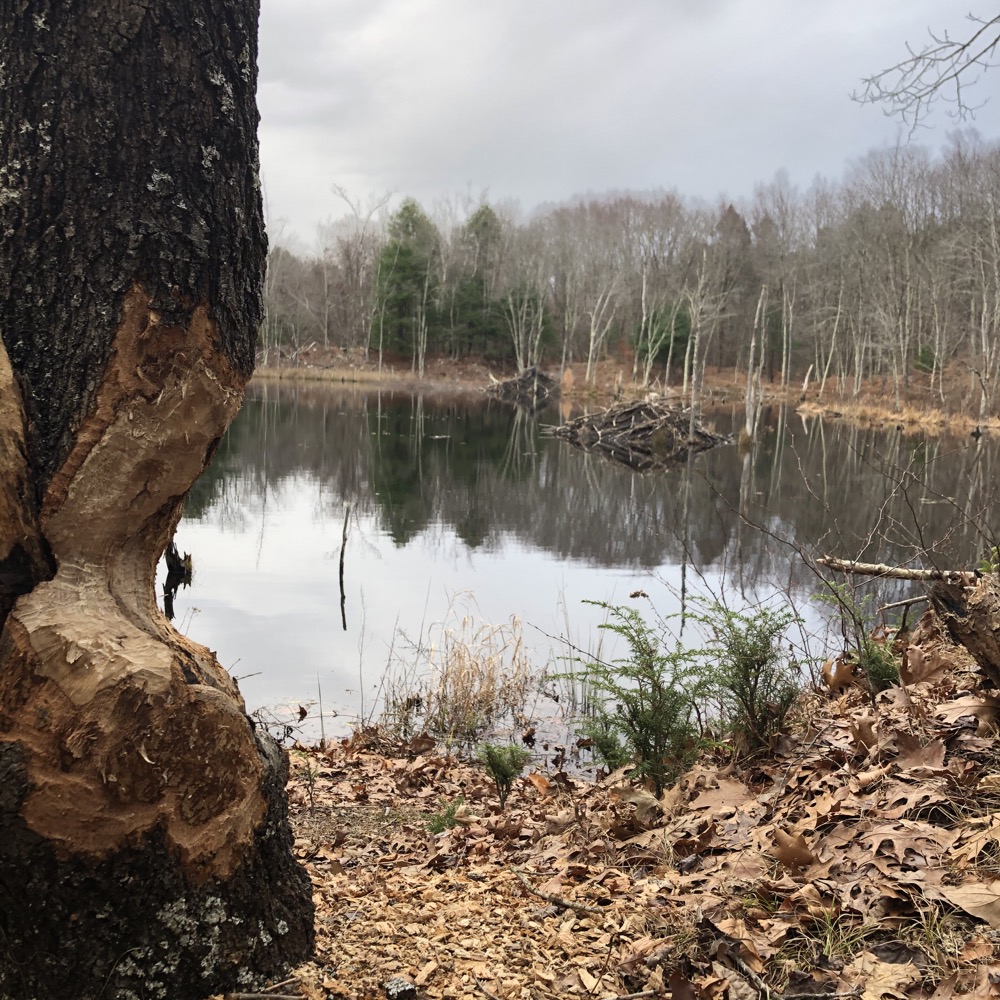 Really, chapeau to the Salem Land Trust for maintaining this trail. Though short, it’s one of my favorite trails in the state. (Oddly enough, though it shares a name with an iconic ridgeline hike in Maine, the trail absolutely reminded me of Maine’s “100-mile Wilderness” and its low-lying, boggy pathway.)

Once safely clear of any water danger and back on the main Sonny’s Trail, I continued west towards an entirely different part of the preserve. 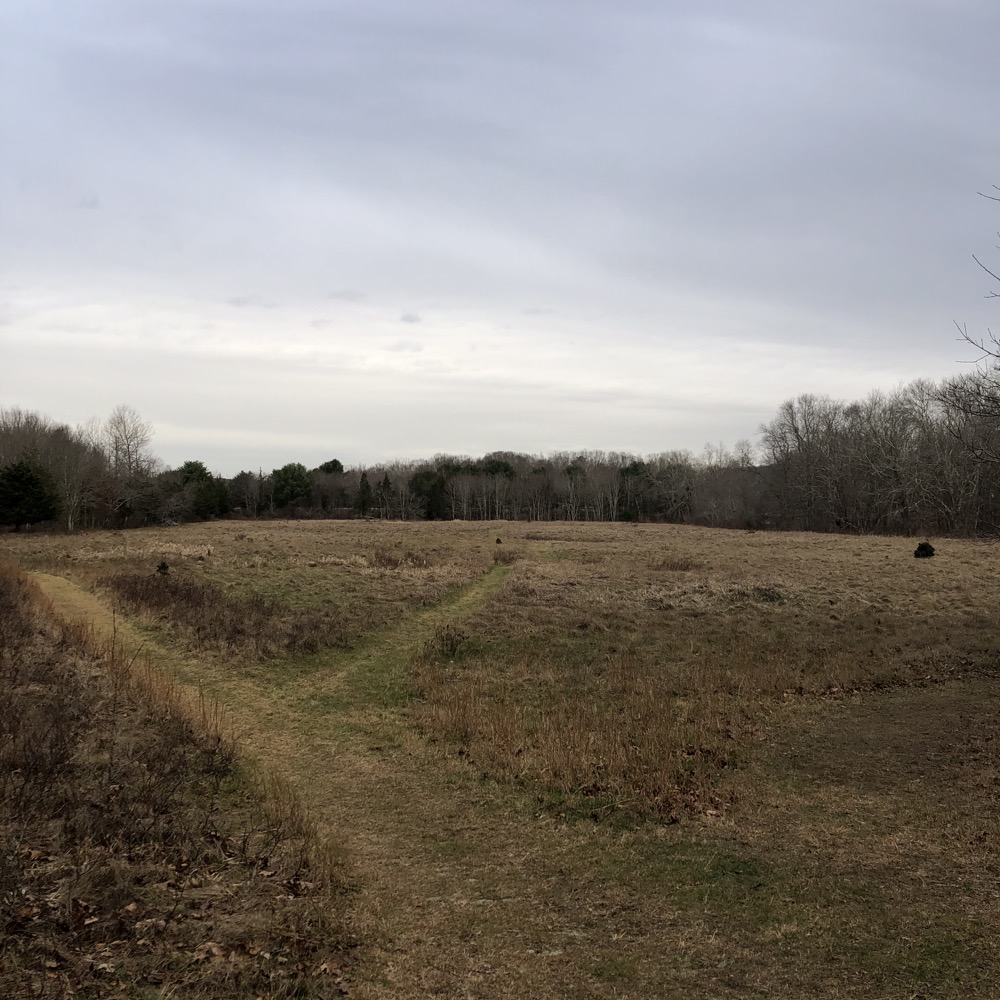 There is another field at the far end of the property – a field that abuts Route 11. I was actually a little startled at how close I was to the highway, as the Walden Preserve feels so incredibly remote. (Granted, the eastern end of Route 11 isn’t exactly I-95, but it still felt weird.)

We need the tonic of wildness…At the same time that we are earnest to explore and learn all things, we require that all things be mysterious and unexplorable, that land and sea be indefinitely wild… We can never have enough of nature.

More interesting are the Laurel and South loop trails. It began raining as I made my way through the laurel thickets and into a tall stand of pine. It’s clear that neither the cattle farm, the sand and gravel folks, nor the housing developers cut anything here. This laurel is old, and the pine trees are older. Ironically, the soil here is very sandy. Go figure. 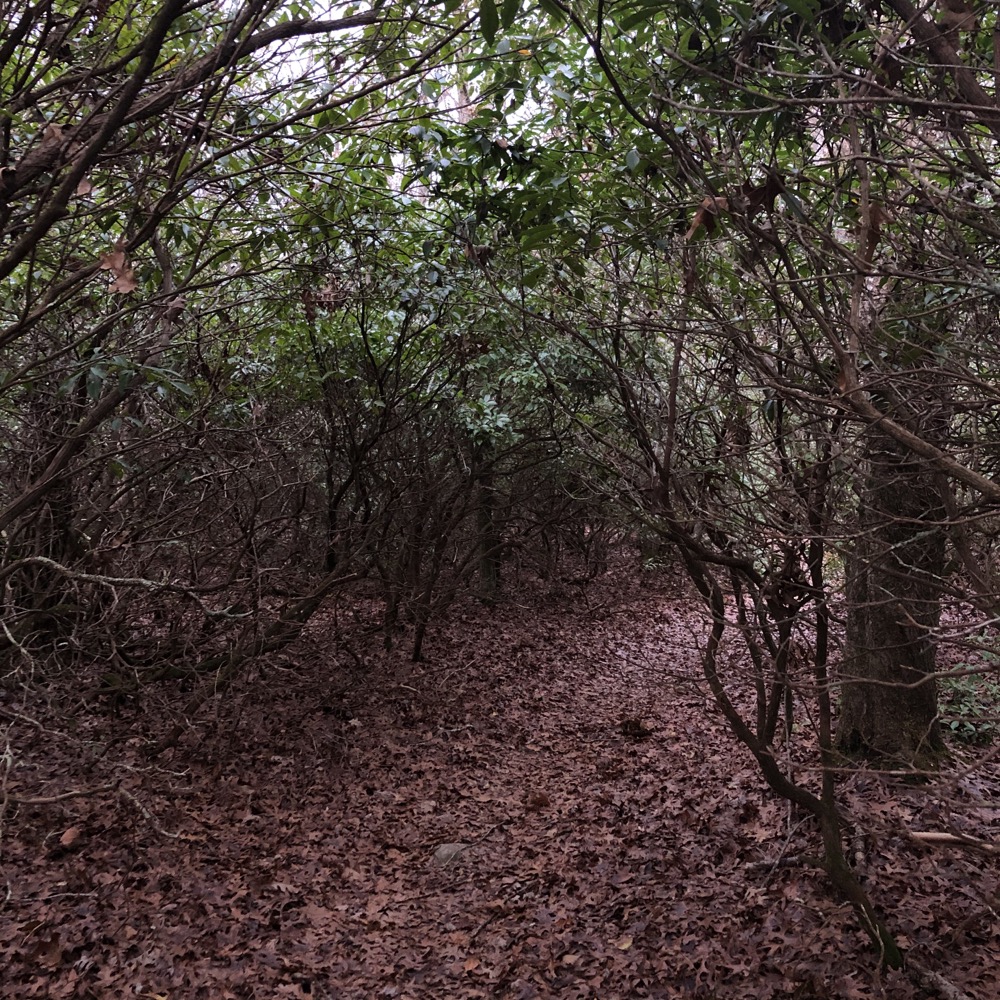 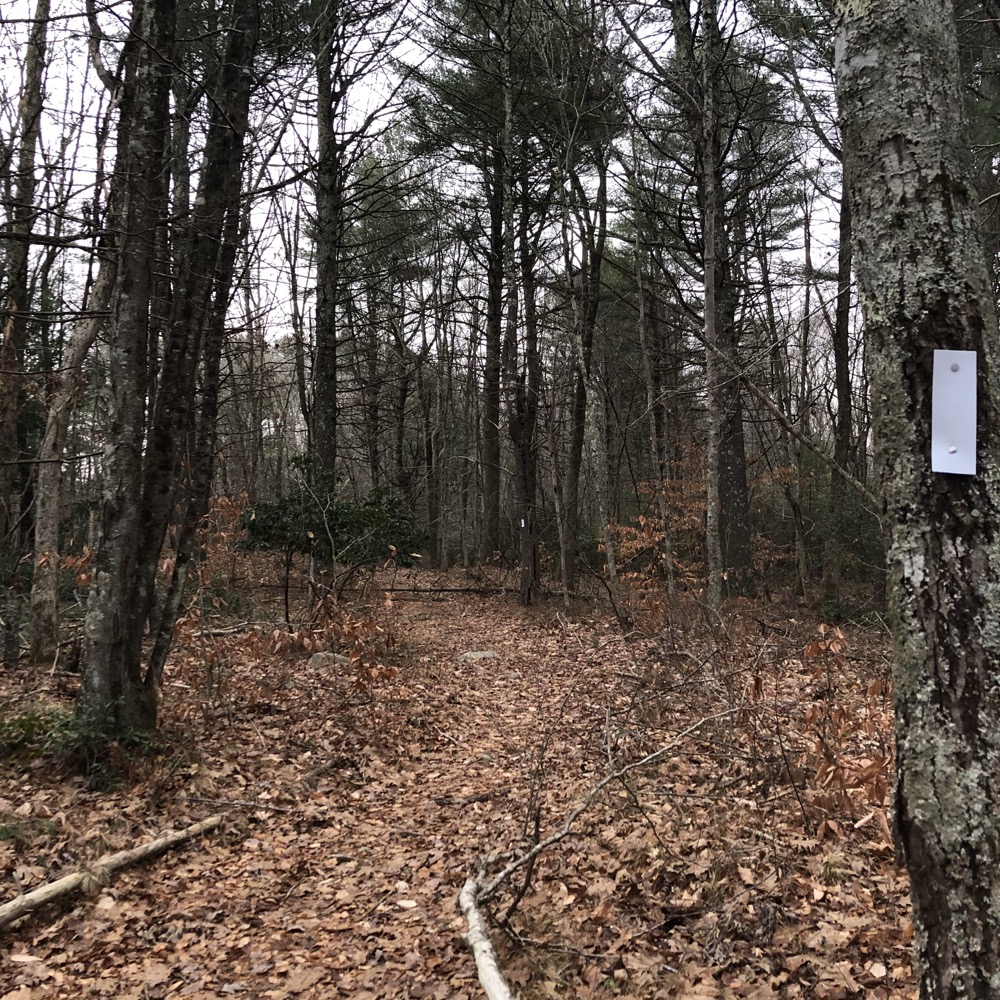 I did most of both loops as the cold rain began coming down much harder. I hadn’t really prepared for cold rain too well and was a couple miles away from my car. I realized that if I could bushwhack and cross Harris Brook somehow, I’d save myself at least 20 minutes of backtracking.

I went for it through the laurel. Fortunately it wasn’t too thick and I found a decent spot to cross the brook. Just a hop, skip, and jump later I was back to Sonny’s Trail heading towards my car. I was walking now on the other side of Turtle Pond and the Eight Mile, and it’s here that there is the most evidence of the vestiges of what this place used to be. 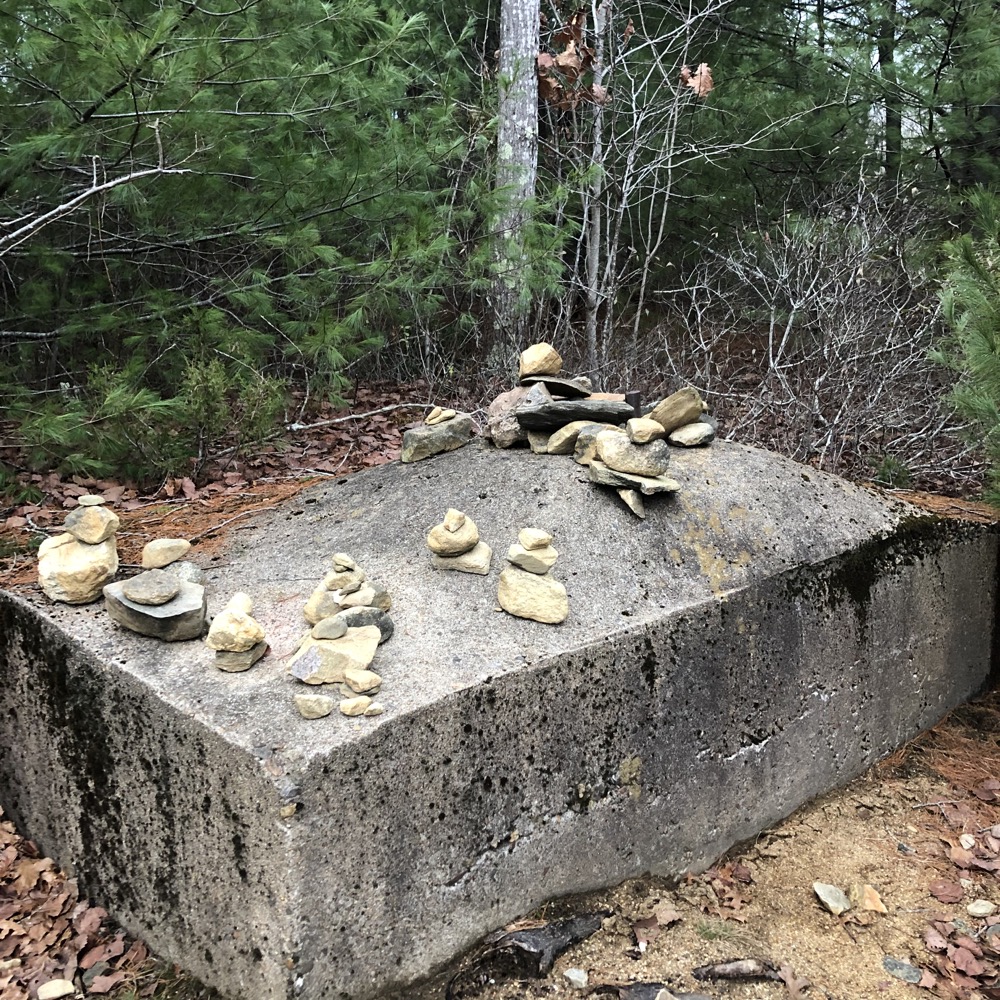 The preserve was saved in large part by a man named David Bingham, grandson of Hiram Bingham III. The grandfather was an “academic-explorer” and later Connecticut governor and senator who is credited with the modern discovery of Machu Picchu during a 1911 expedition to Peru. Neat. Anyway, David (who grew up nearby and is a former Salem Land Trust president) and his wife Annie helped raise money for the purchase and permanent protection of the Walden Preserve.

One last trail took me around the fields near the parking area. It’s called the Pierce Arrow Trail and is blazed a lovely shade of aquamarine. Like most people, I had no idea what a Pierce Arrow was until right now, as I write this.

This is a Pierce Arrow: 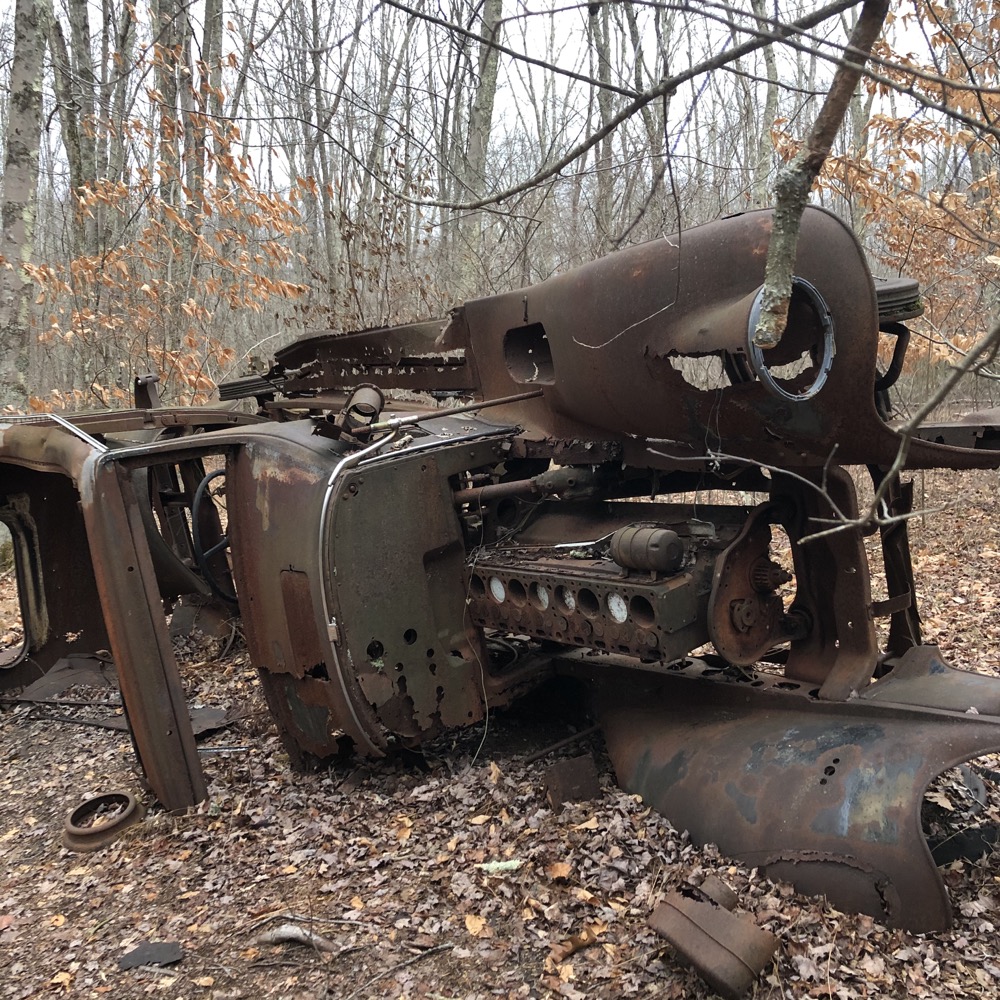 A rusted hulk of a century-old automobile, resting on its side. Pierce Arrows, manufactured in Buffalo, N.Y., from 1901 to 1938, were considered among the most luxurious vehicles of the era, so much so that in 1909, President William Howard Taft ordered two to be used for state occasions as part of the first White House fleet. I appreciate that the land trust named the trail after what is essentially ugly litter.

Not ugly? The lovely shade of blue that matched my eyes. 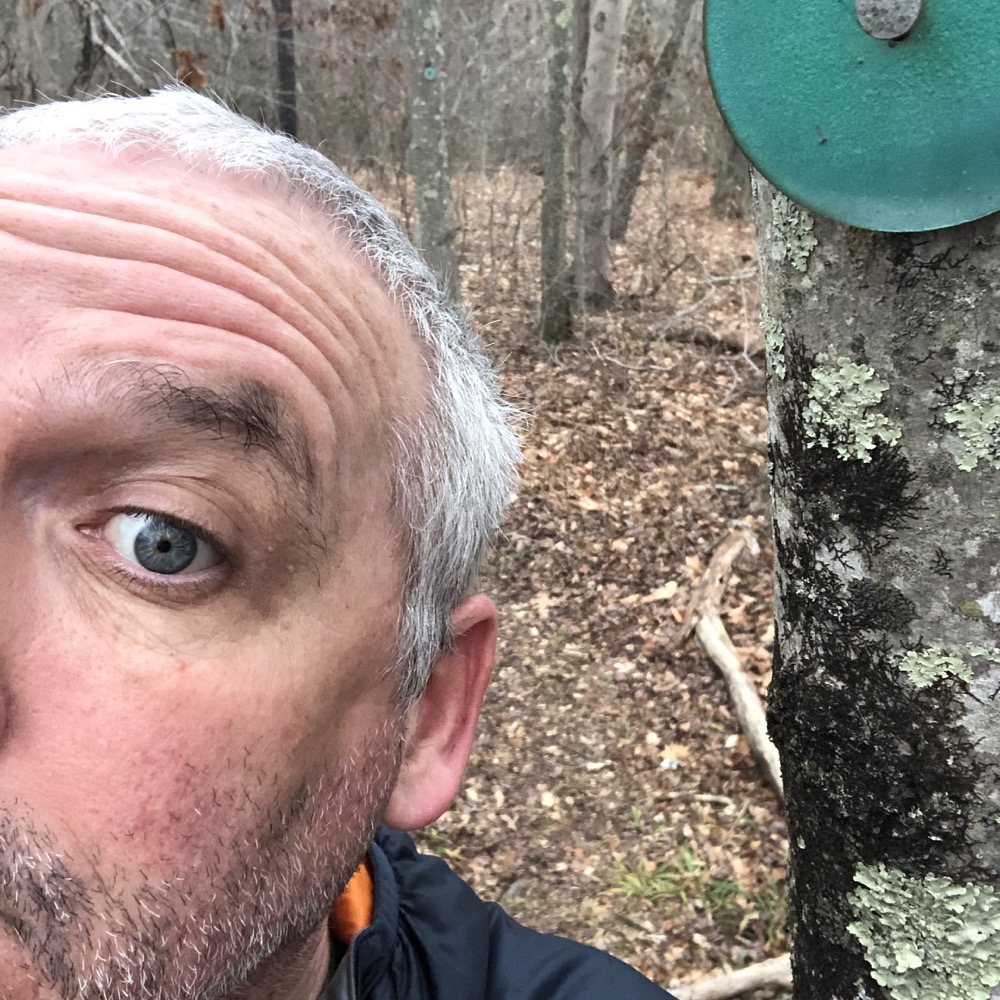 (I sent this picture to my wife as a joke… and I put it here as a joke as well. Not a good one, and I should probably delete it, but if you’re reading this that means that I forgot to do so.)

This last trail wends around through some thickets and messy understory before emerging at the back of the fields that would end my hike. It was here that I finally saw another person, walking her dogs. Granted, not many people go hiking on December weekdays in a cold off-and-on rain in Salem, and that’s fine with me. The Walden Preserve is best enjoyed alone I think.

I find it wholesome to be alone the greater part of the time. To be in company, even with the best, is soon wearisome and dissipating. I love to be alone. I never found the companion that was so companionable as solitude.

The three quotes on this page are from Henry David Thoreau’s seminal work, Walden: Or, Life in the Woods. Thoreau wrote another book called The Maine Woods which was less philosophical, but arguably more readable. The parallels here with the name of the preserve and the Knife Edge Trail and the solitude and nature’s reclamation… perhaps now you can understand why I loved this hike so much. 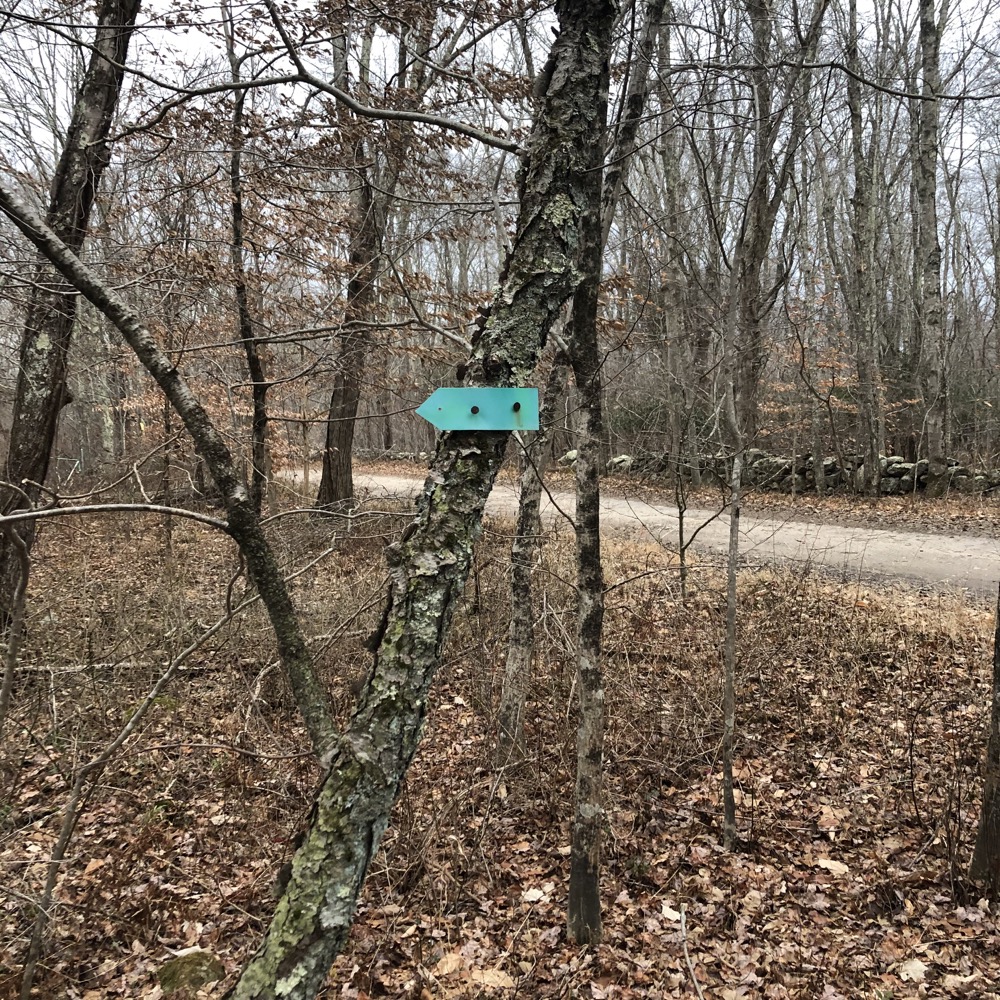 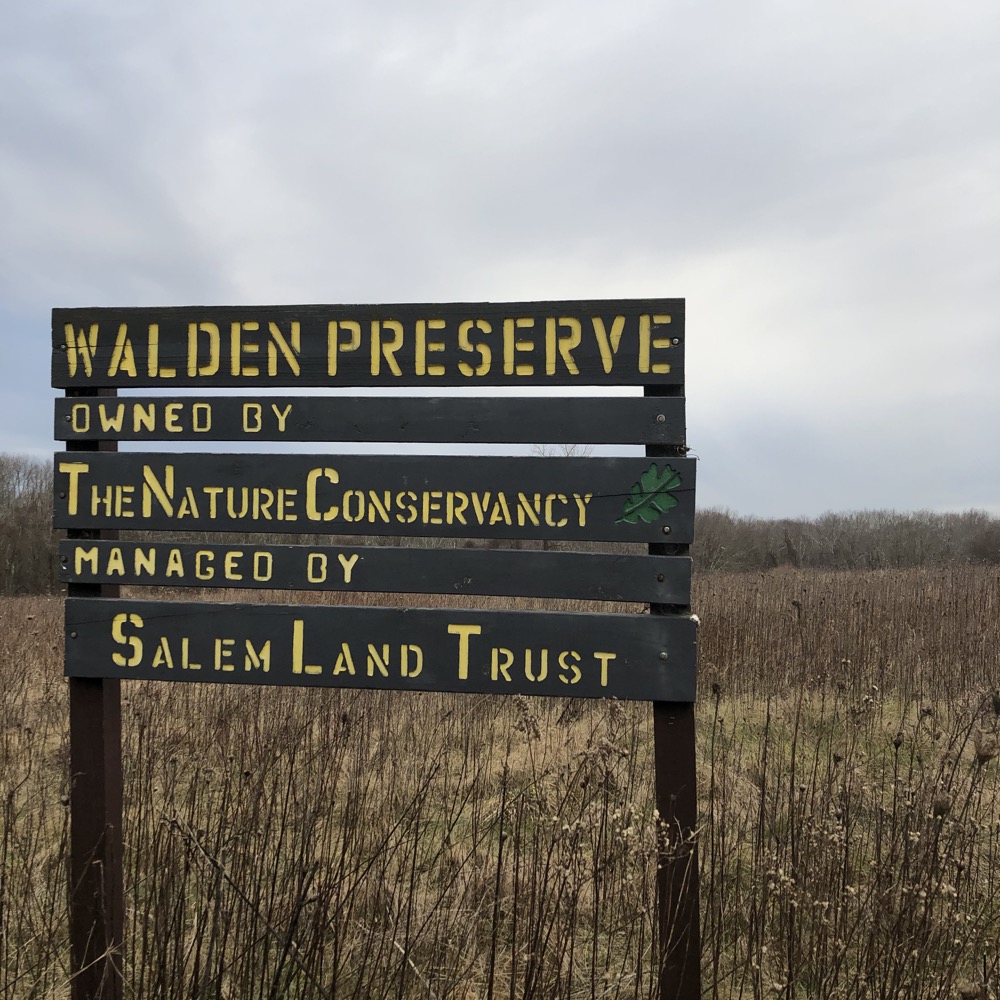