Just another little trail network off the beaten path in Salem. Park, walk, take pictures, and check it off the list. Simple, right?

C’mon. You know these things are never quite as simple as that. For starters, I have no idea what the name of this place is. I can’t pretend to direct you to an accurate trail map and I’m entirely confused about its future. 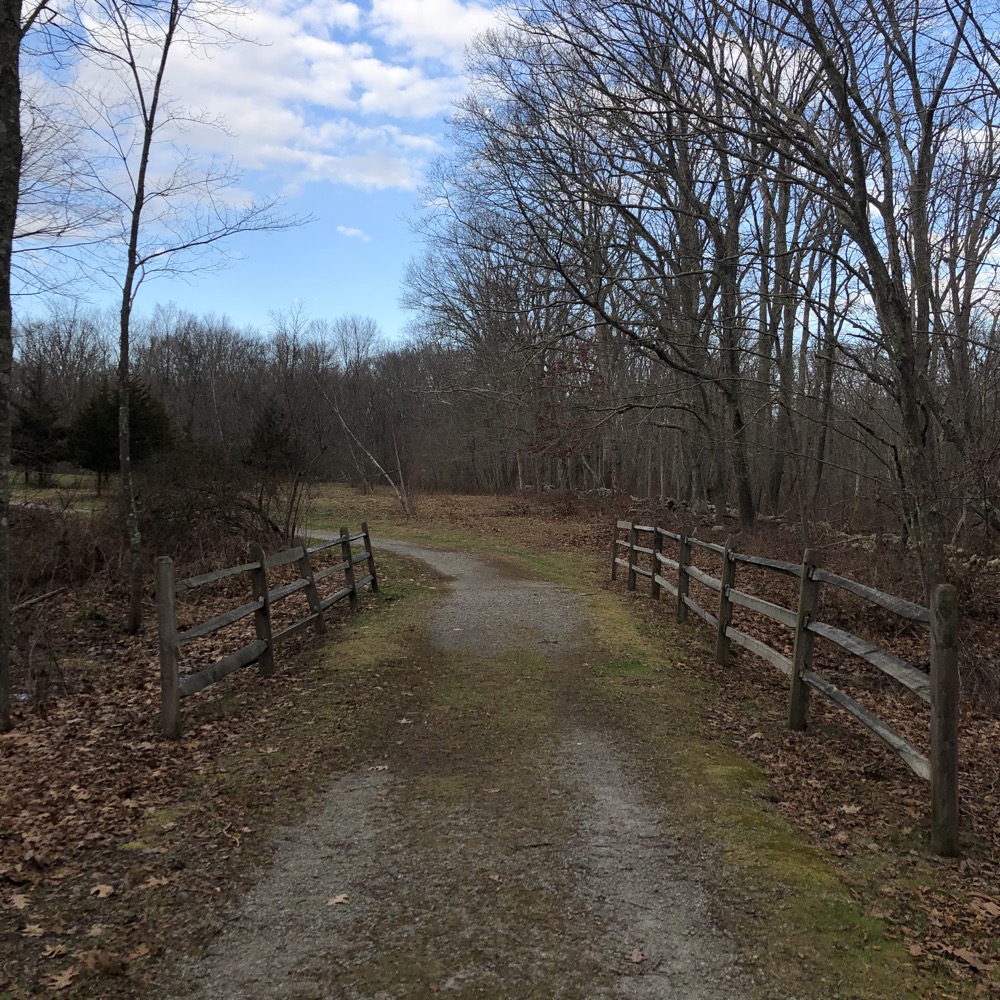 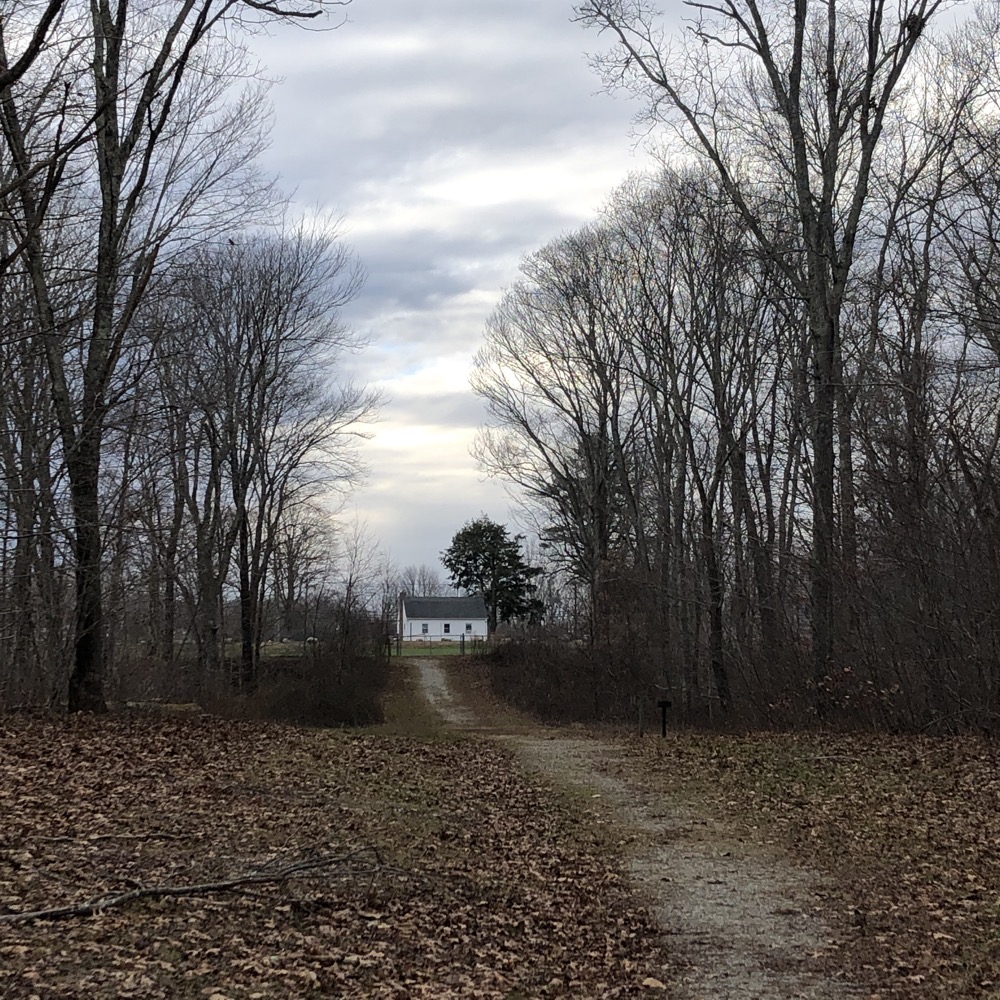 My best guess is that the Salem Nature Trail exists within the Harris Brook property. And that the Harris Brook Trail will someday be a multiuse path that may or may not end up extending further in some direction. But I’m really not sure. I’ve seen this place called “Salem Town Park,” “Salem Nature Park,” and I’ve seen the Nature Trail called the “Salem Multi-Use Trail.” Eesh.

Lest you think this is some dumpy trail, it’s not. Lots of money and time has been spent here on an impressive bridge spanning Harris Brook, and tons of stone dust has been put down on the main path. There’s a large parking area, a nice kiosk with an inaccurate map, and plenty of official metal blazes attached to trees. 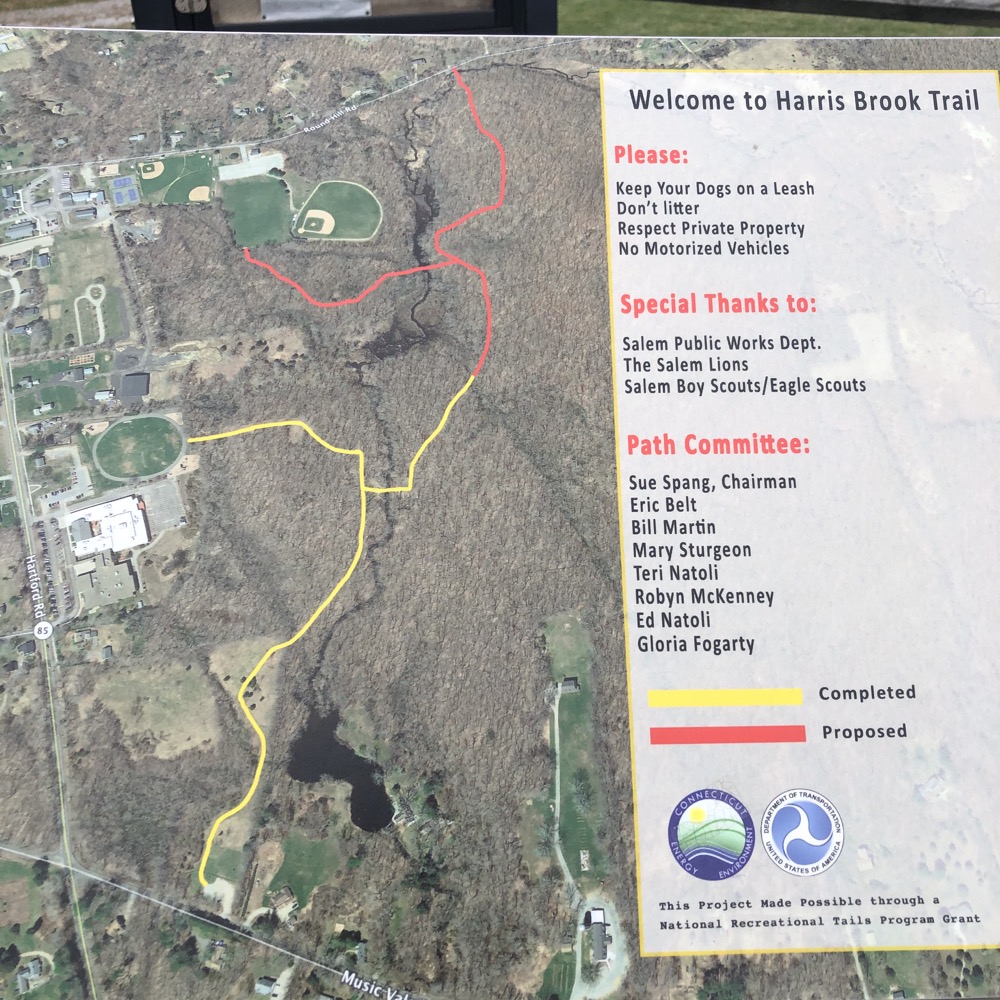 There are no yellow or red blazed trails here, they are blue and green. And there are several more trails as well. 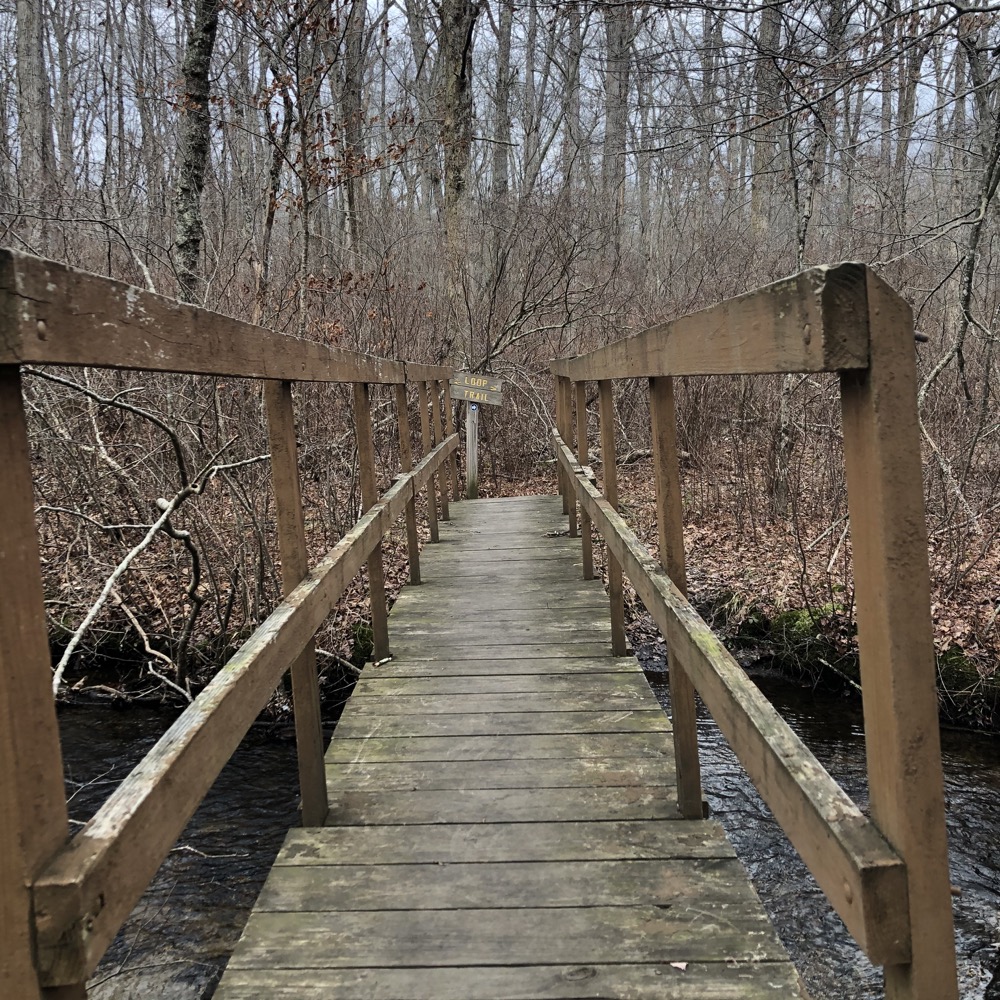 And most importantly, it’s a really nice property and worth checking out… just be prepared to be confused here and there.

In late 2020, the map at the trailhead did give a decent impression of what was laid out ahead. A framework if you will. Go north, cross the brook and you’ll eventually hit a road and have to turn around. Good enough for me.

I began down the main path west of the brook. It is wide and pleasant with several unmarked trails heading west to houses and to the Salem Elementary School. After a while, the trail split, with the main branch going over Harris Brook a very new, very nice bridge. No, not the one in this picture. 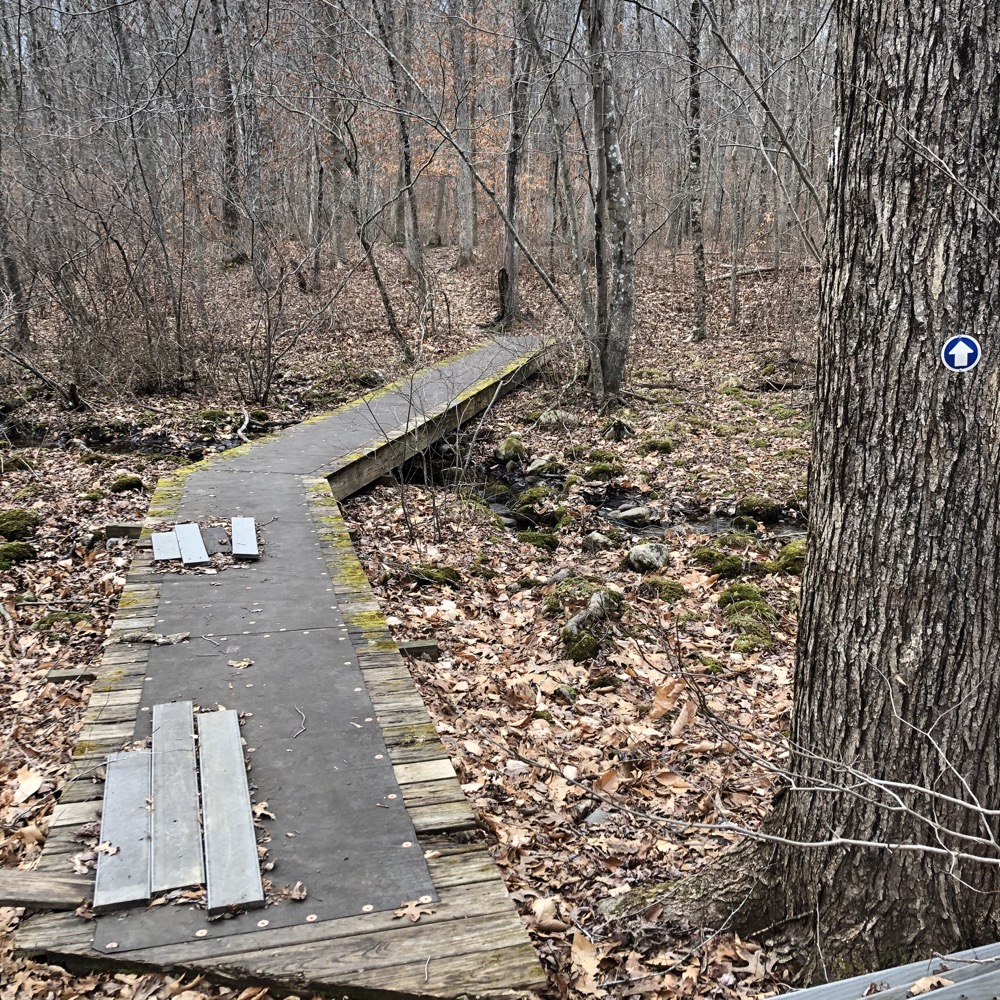 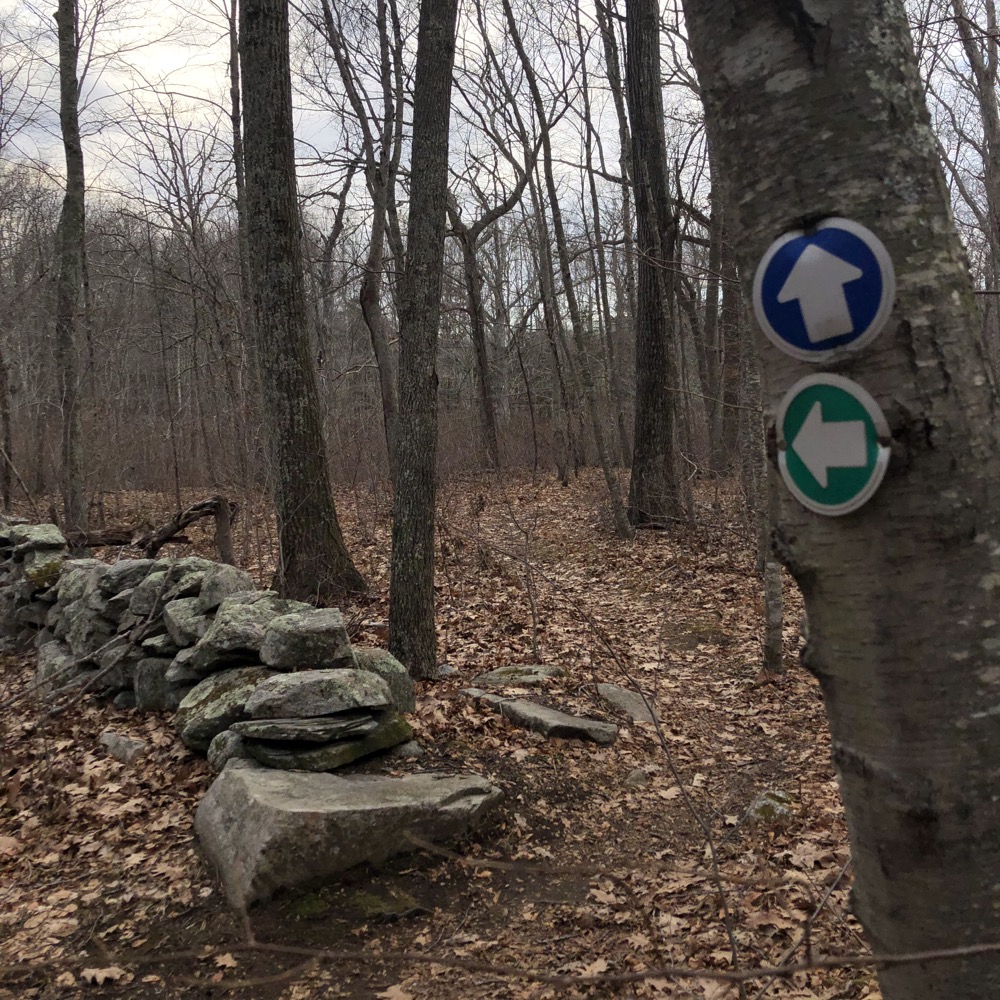 I decided to continue straight ahead, and the trail became more of a woodland trail in short order. Still cleared well and blazed, but no longer wide enough for a small car. A smaller bridge than the first one took me over Harris Brook and onto a large, sweeping hillside for the next 15 minutes or so.

A blazed trail went off to the west, back down towards the brook. I decided to skip that for the return trip and continued north to the edge of the property along Round Hill Road. This entire trail in the northern half of the property was marked “proposed” on the kiosk map. Well, it’s no longer proposed… it’s very real and pretty nice. 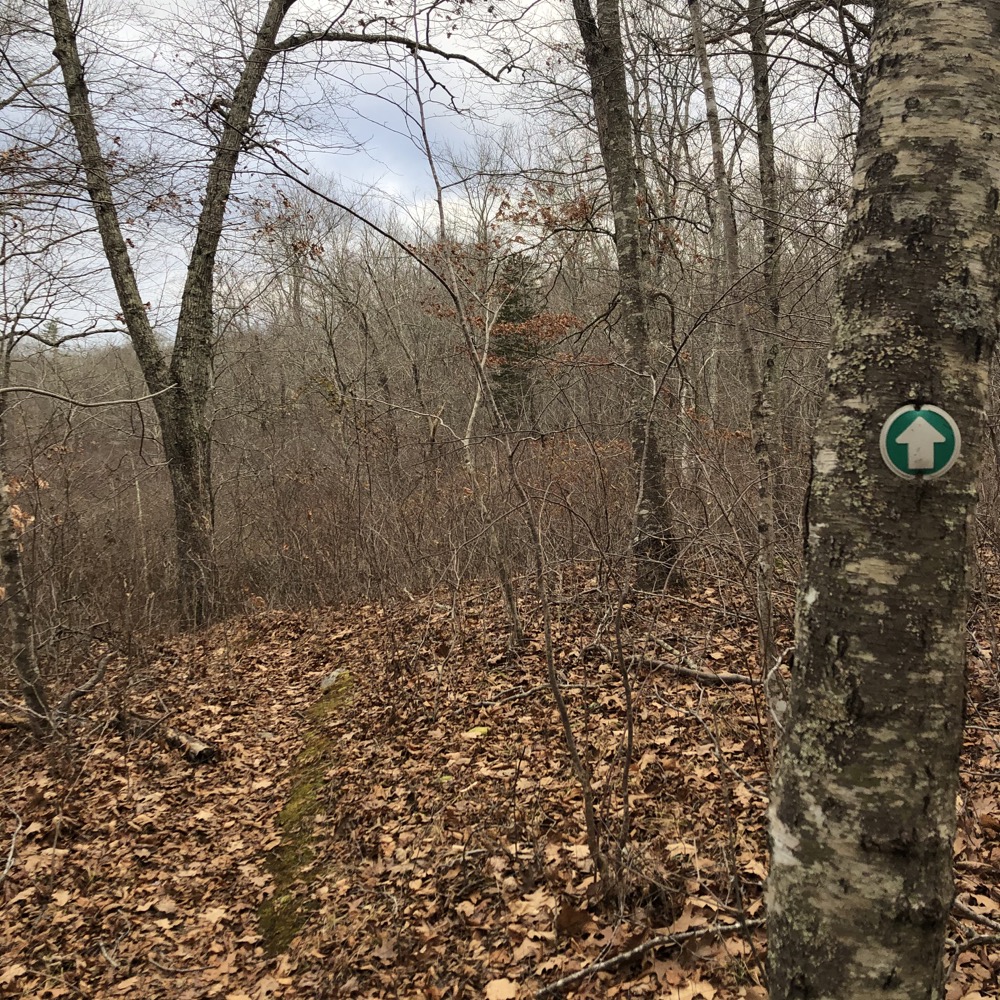 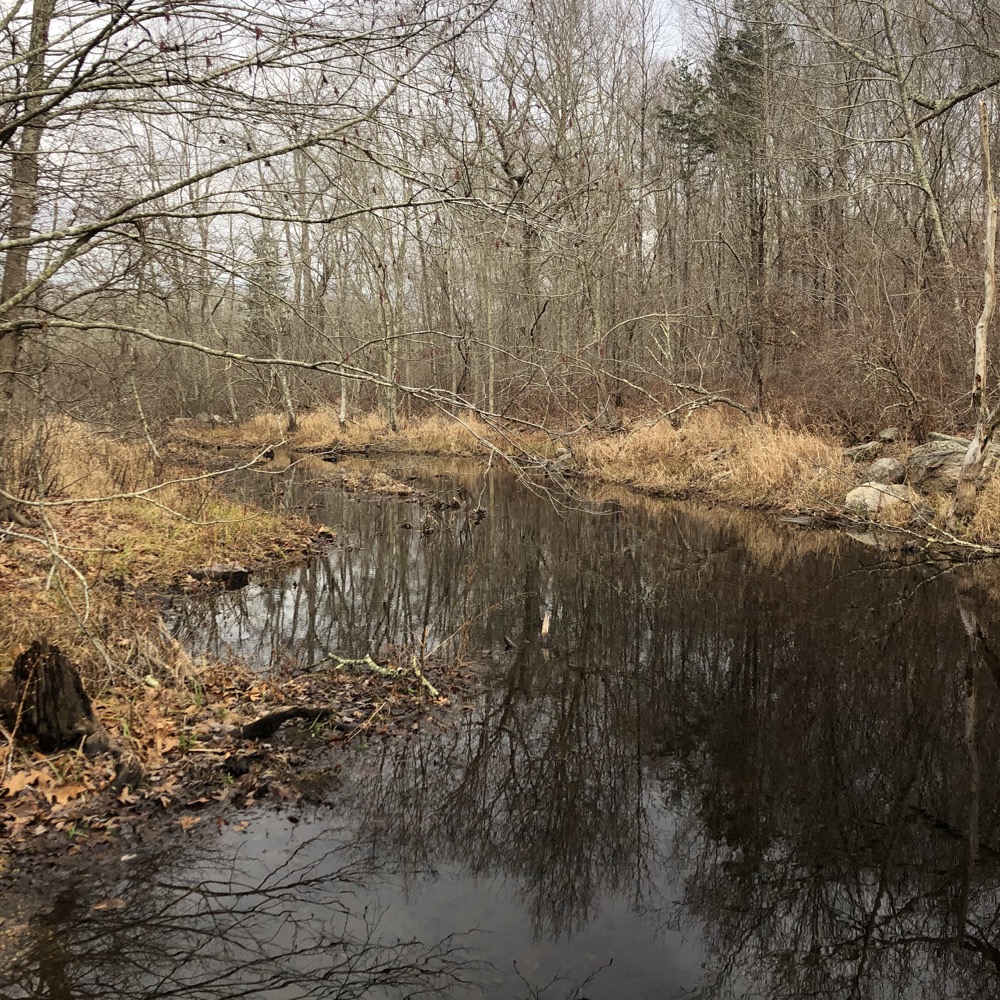 For some reason I remember getting a phone call on this stretch from a well-regarded soccer coach. I didn’t answer, but he left a voicemail inviting my son to a four-man training group to meet thrice a week during January, February, and March at the height of the pandemic’s second wave. Invite only, on the down low, keeping the top talents getting touches on a ball. That sort of thing. (He was marketing his program of course, and being overly complimentary is part of that.)

The pandemic was incredibly tough for team sports to say the least. High school and collegiate athletes’ dreams and passions have been deferred at best, destroyed at worst. We were able to keep Calvin going and doing what he loves by cobbling together various trainings with different coaches and teams in many different locations from fall 2020 to early spring 2021.

And as I reached the end of the trail, where it just sort of peters out in a marshy area, I realized how lucky I am that I enjoy these solitary pursuits. I don’t need anyone else to accompany me when I go hiking. Let’s hope that the COVID-19 pandemic is history by the time you read this and we all can pursue what we love, more or less as before. 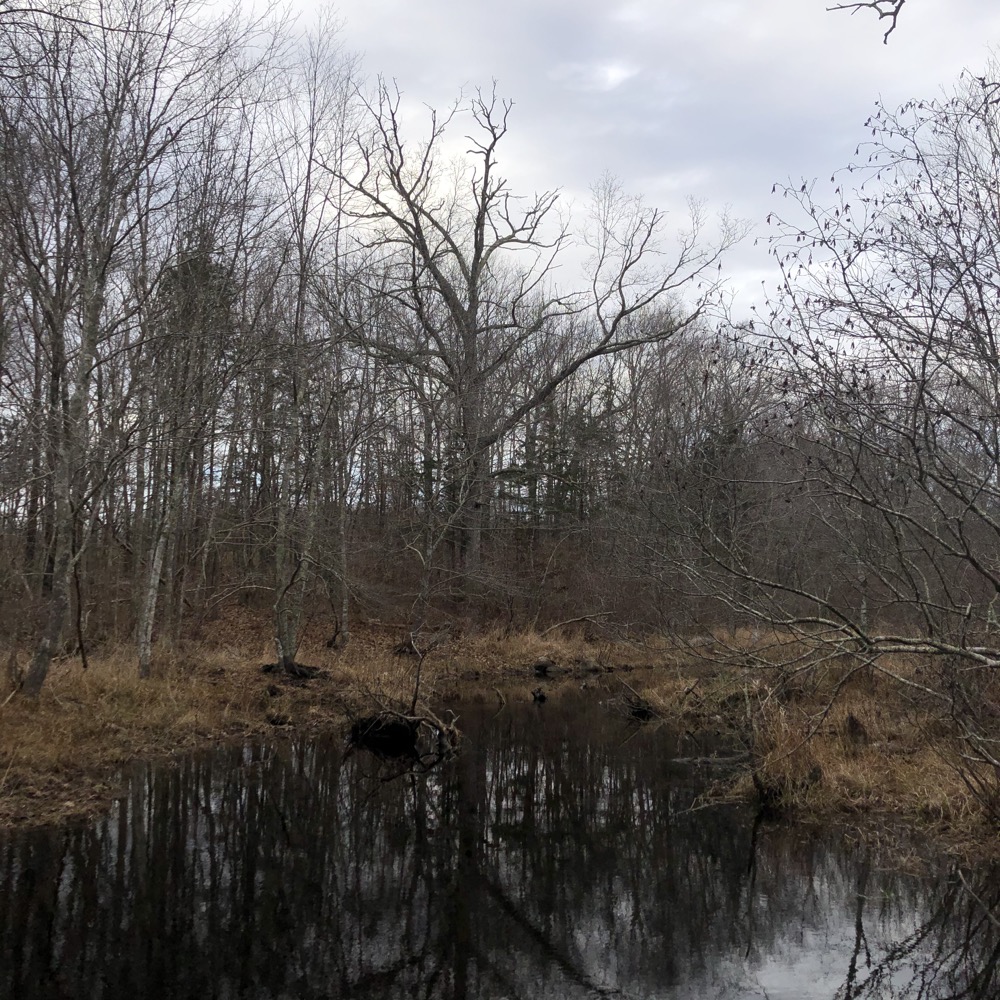 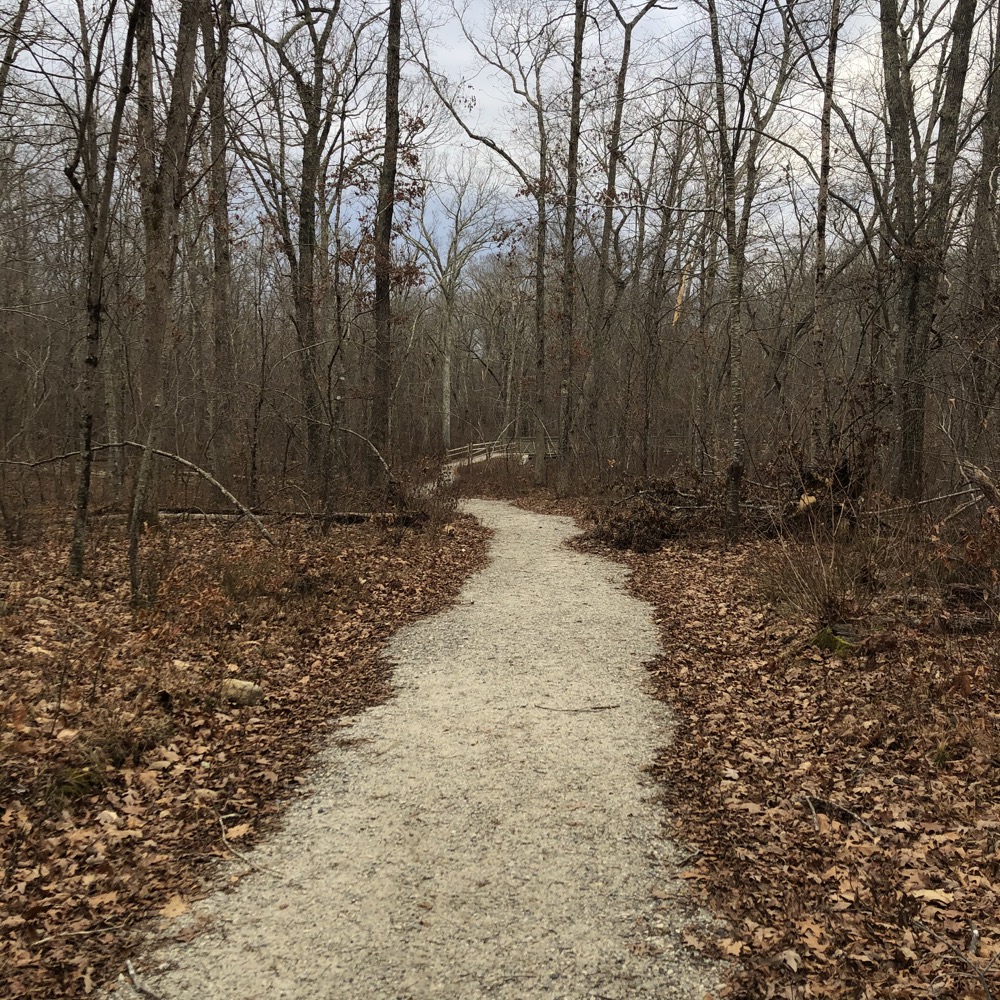 On my return trip along the same trail, I did check out that spur trail down to the brook. I’m glad I did as a mature bald eagle soared above before perching high in a tree across the water. It was too far away to get any sort of picture with an iPhone, but just seeing that guy soaring, after hearing a coach tell me how special my son is, after buying a bunch of world-class beer from Fox Farm Brewery 30-seconds away from the parking area, enjoying some time alone in the woods… it just felt good.

I took the “other” route back when the trail split which put me back on the wide stone dust trail and across the fancy new bridge. It really is fancy. And maybe the end goal here is to make the whole place fancy. I don’t really know, but they’ve certainly been improving it over the last few years.

So if you visit in 2025 or whatever, let me know what’s going on in the comments below. But only as long as you stop at Fox Farm afterwards. 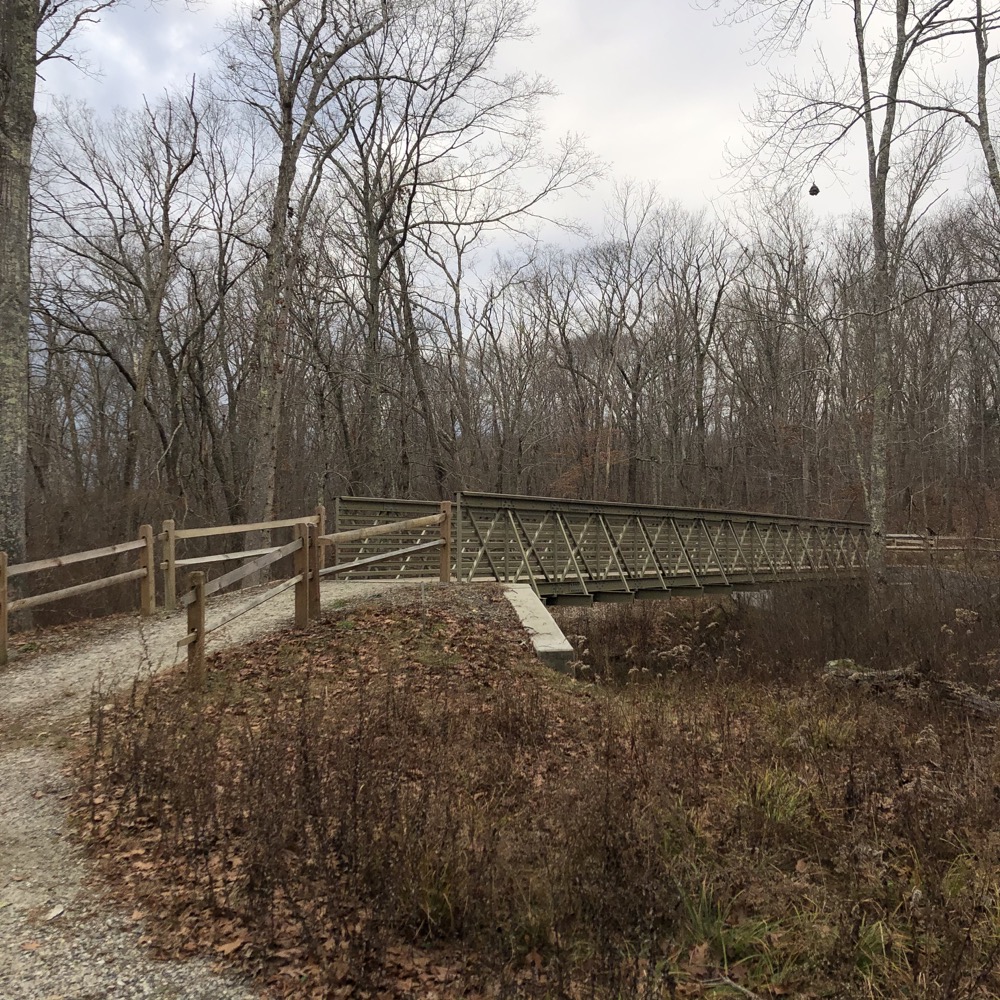 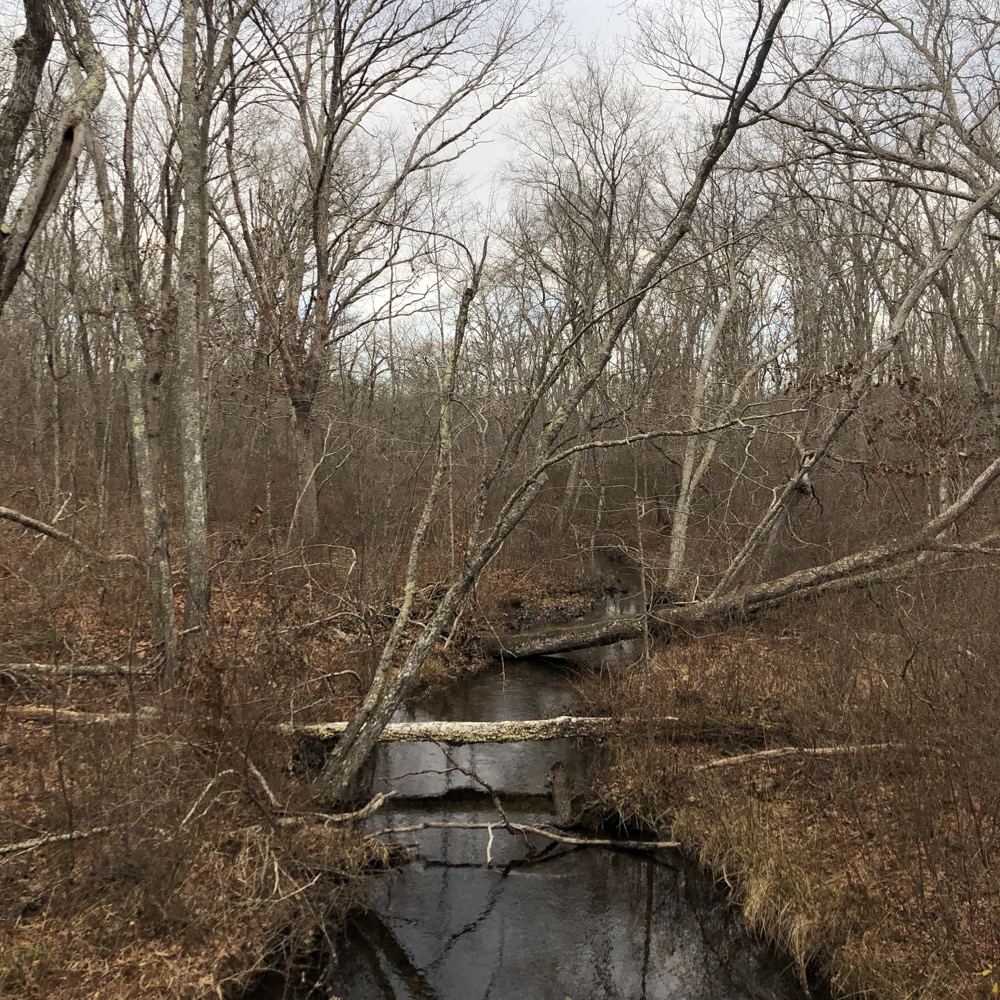