As most readers know, every hike (and “hike”) I feature on CTMQ isn’t great. Sometimes my hiking partner is a drag, sometimes the weather is a bummer, and sometimes the hike itself isn’t impressive. And sometimes, all three factors come into play. 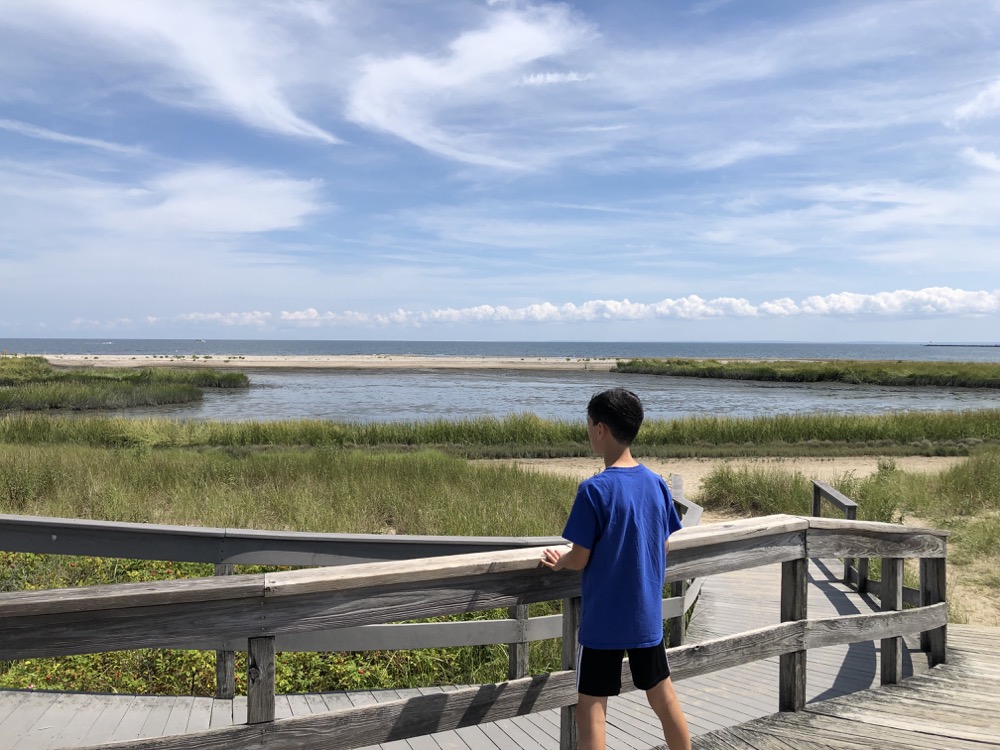 I’m not saying that was the case here at the Smith-Hubbell Sanctuary at the Audubon Society Coastal Center in Milford, but I can say that my son Calvin did not want to make the 15-minute effort required of this place.

He’s 10 going on 17 and can be a bit petulant at times. Especially when it’s very hot and he’s oh-so-tired and bored and there’s Minecrafting to be done elsewhere. Well, sorry kid, get out of the car and walk. In fact, I’m going to make you climb a big, giant tower to the sky and I’m going to take pictures of you and post them on the preeminent website about Connecticut! 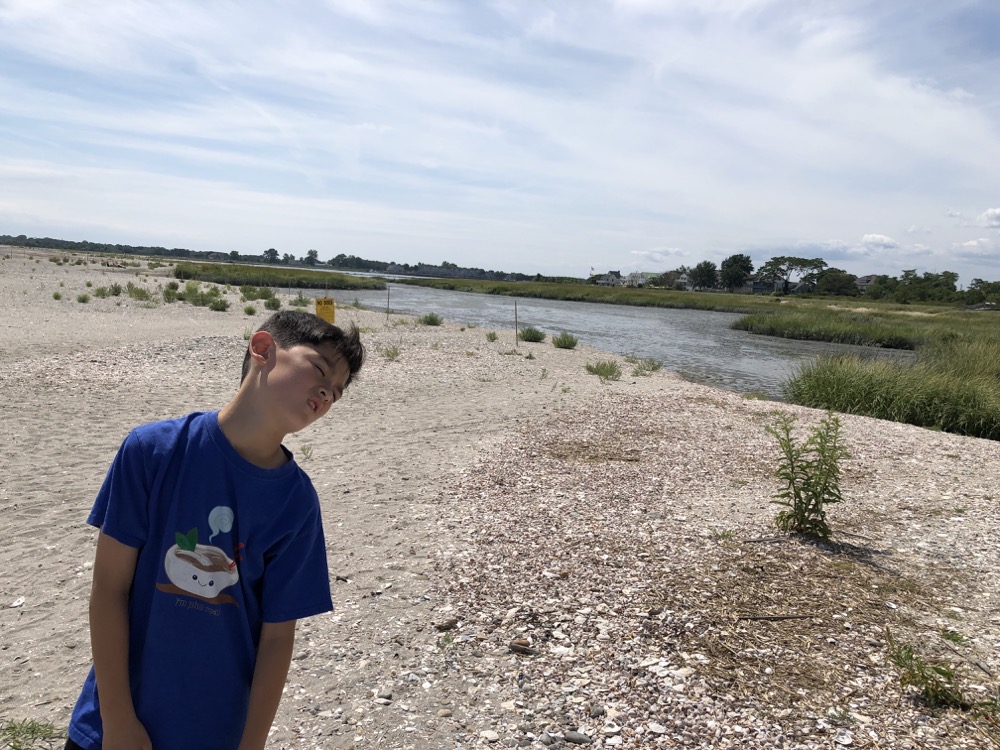 This is a small sanctuary at only eight acres, but it is protected on three sides by the McKinney National Fish and Wildlife Refuge, the Charles E. Wheeler Tidal Marsh, and the Long Island Sound. Land and water ownership along the Connecticut coast is a tricky and confusing thing. Like, for instance, the Smith-Hubbell Sanctuary is owned by the Connecticut DEEP but operated and managed by Connecticut Audubon, which is different from the National Audubon and… oh never mind.

At least it’s publicly accessible, which isn’t always the case in Connecticut.

So let’s publicly access this joint; there’s basically one loop trail here with a couple side trails and boardwalks. It makes a difference at which point on the tidal schedule that you visit, as is the case with all coastal trails everywhere. Tide goes in, tide goes out. You can’t explain it. 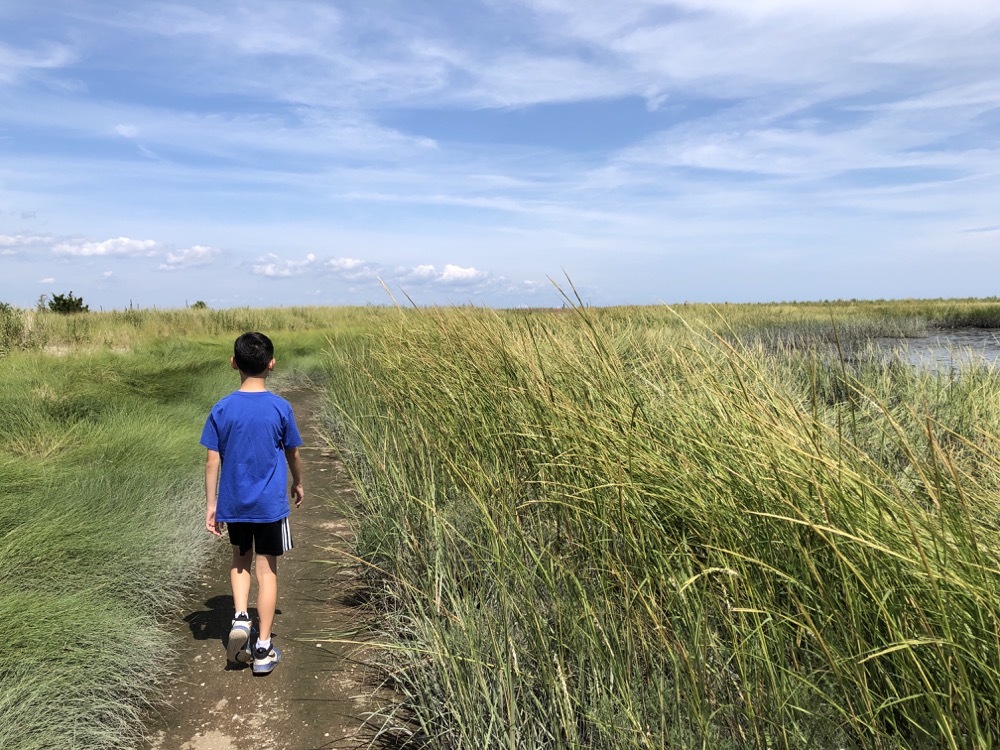 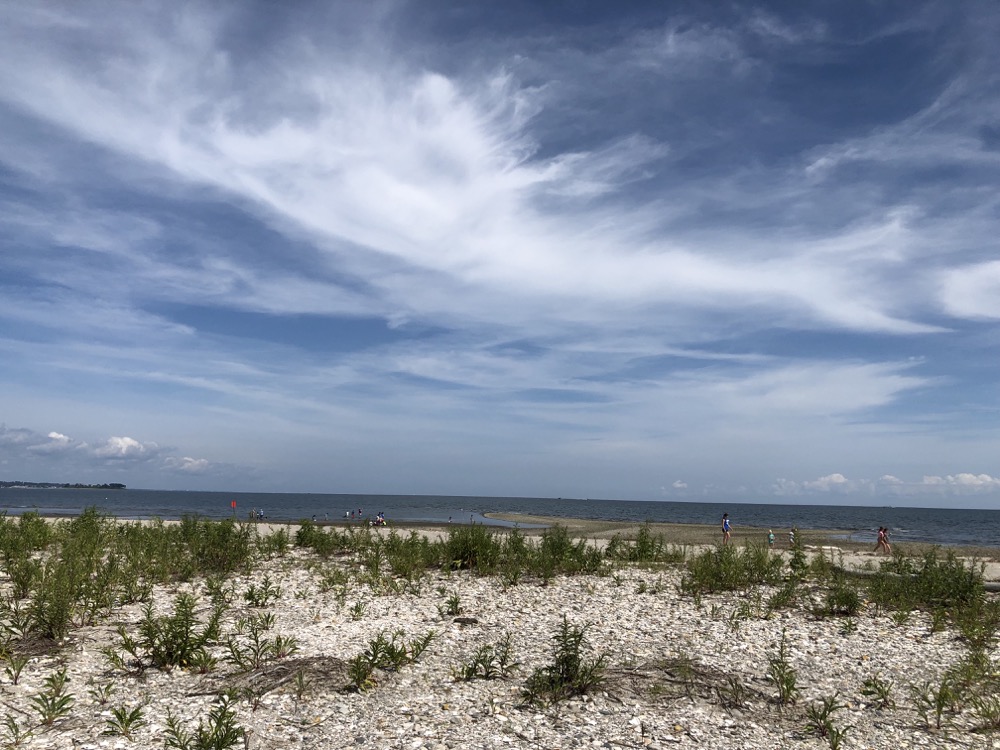 The sanctuary is situated, essentially, on a spit of land where the Housatonic River empties into the Long Island Sound. There’s a tidal marsh, sand dunes, a little beach, and some border community between the shore and some woods. Oh, and an observation tower! Y’all know I love me some observation towers. (In fact, I have a whole list of, and my visits to, them here.)

I saved the tower for the end of our oh so strenuous walk. Man, kids can be so ridiculous sometimes, can’t they? We made our way through the little pollinator garden, across a little road, and out towards the beach. Okay Calvin, it was pretty hot.

But it’s also beautiful. Yes, this is Milford and yes, there’s development all around but it’s still a very pretty little strip of land. Some native prickly pear cactus grows here, but I didn’t get the chance to seek any out. 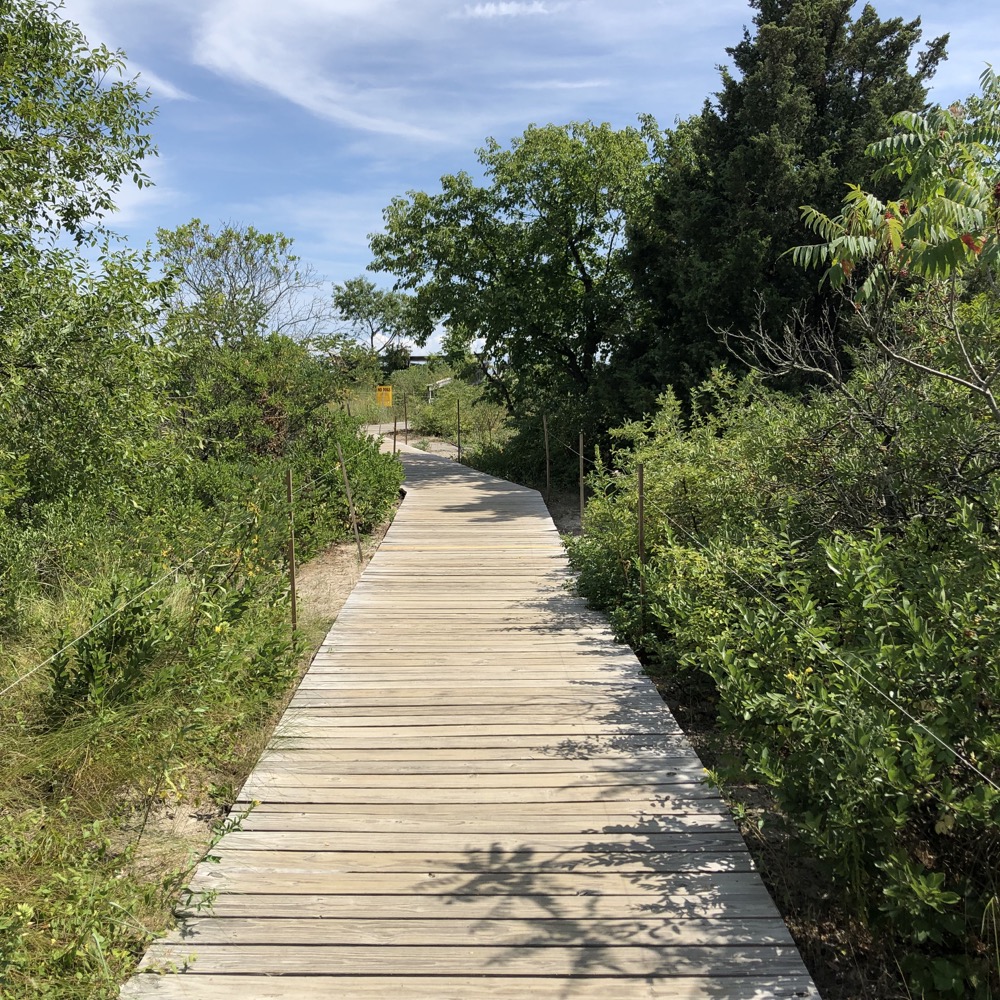 We walked the whole trail and even ventured along some tidal mudflats for a bit. There are several off-limits areas here at different points during the year. These are there to ensure that nesting terns, Piping Plovers, and American Oystercatchers have enough room to lay and incubate eggs, and to rear their young. These nesting birds are protected by federal law, and it is essential that visitors respect these boundaries.

Birding is the thing here. From the purple martin colony and ospreys over in the salt marsh, to the egrets, herons, brant, and other shorebirds by the thousands that pass through here. As neither Calvin nor I are birders, we crunched along the trail on the shells of millions of oysters, clams, whelks, and slipper shells towards the (closed for the day) Audubon Center and its observation tower. 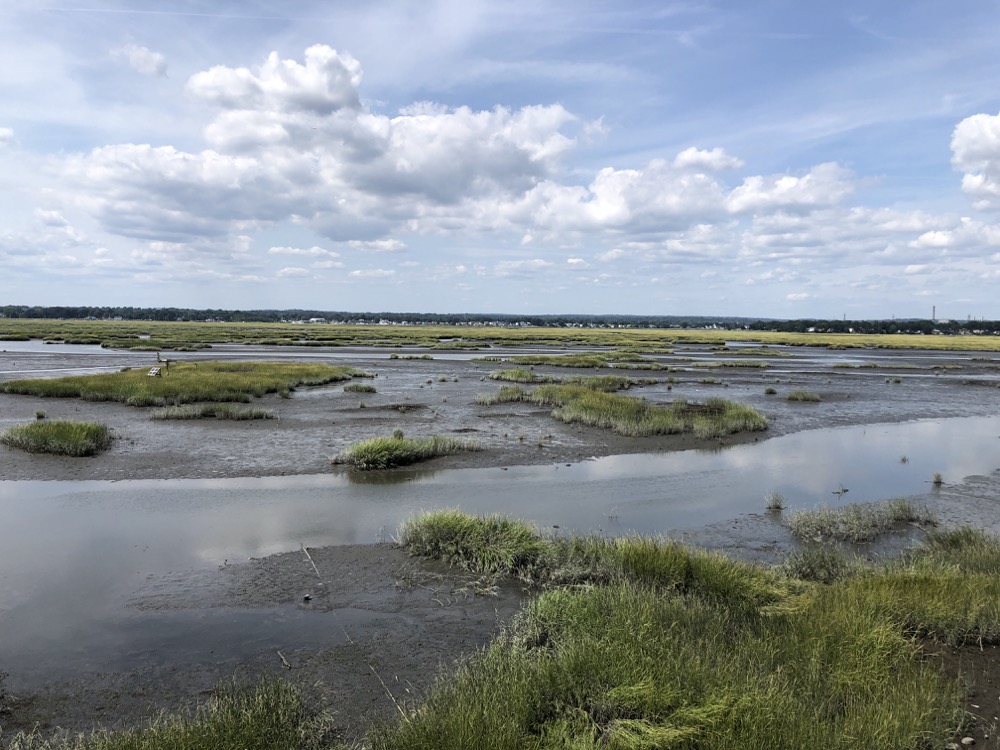 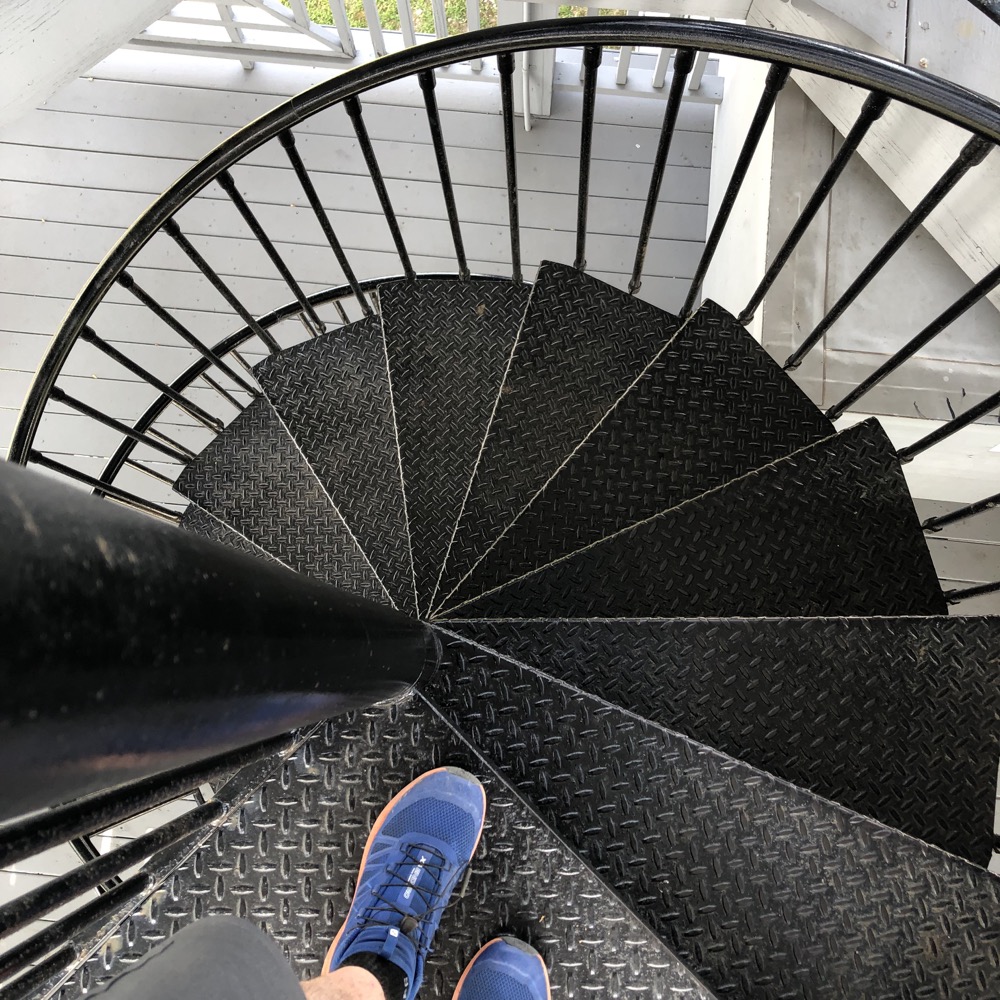 We ascended the tight spiral stairs to the top and, ignoring the two women just sitting up there smoking (that was unexpected) and took in the view of the 625 acres of the Charles E. Wheeler Salt Marsh. I had been here before when I visited this place in 2008 and all those memories came flooding back.

Okay, not really. It’s just a small observation deck more or less at the roof level of a two story building looking out over a marsh at the mouth of one of the state’s larger rivers. But hey, it’s still cool.

As for Calvin, poor beleaguered Calvin, since he endured this trek of monumental proportions, he was rewarded for his efforts with ice cream up the road at Walnut Beach Creamery… where all his whining and exhaustion suddenly and magically vanished. Amazing how that works. 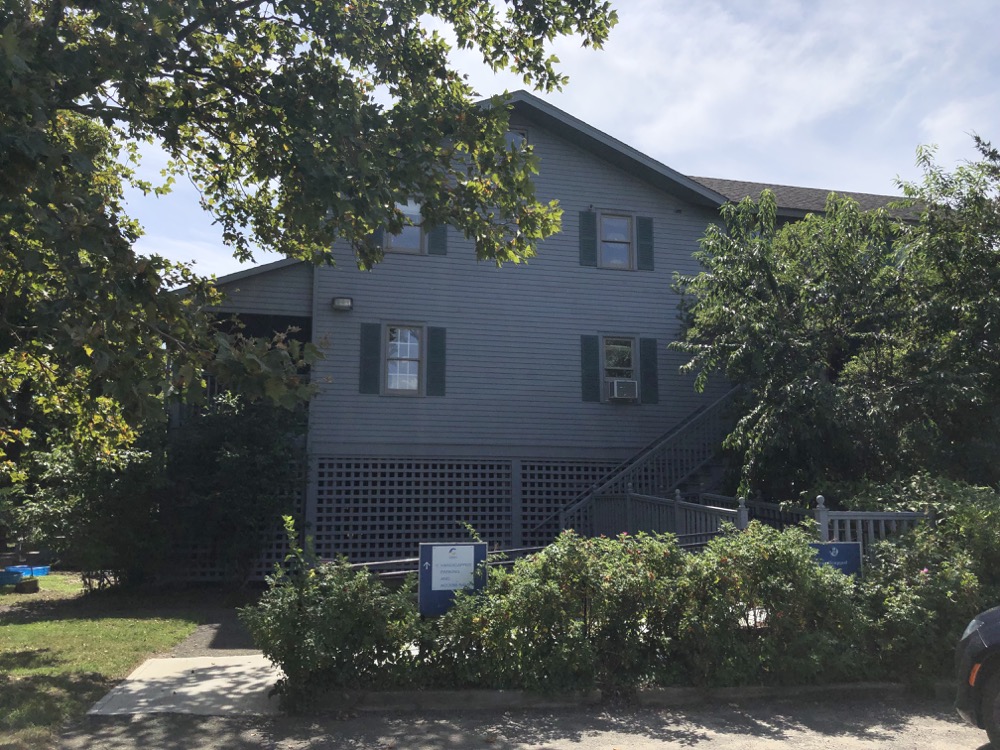