Lists and listicles are as much of an epidemic as the COVID pandemic. These lazy lists are endemic across online publications these days. I mostly ignore all of them – especially any about “Best Connecticut bloggers” or whatever. CTMQ has never even been nominated which tells you how reliable they are. 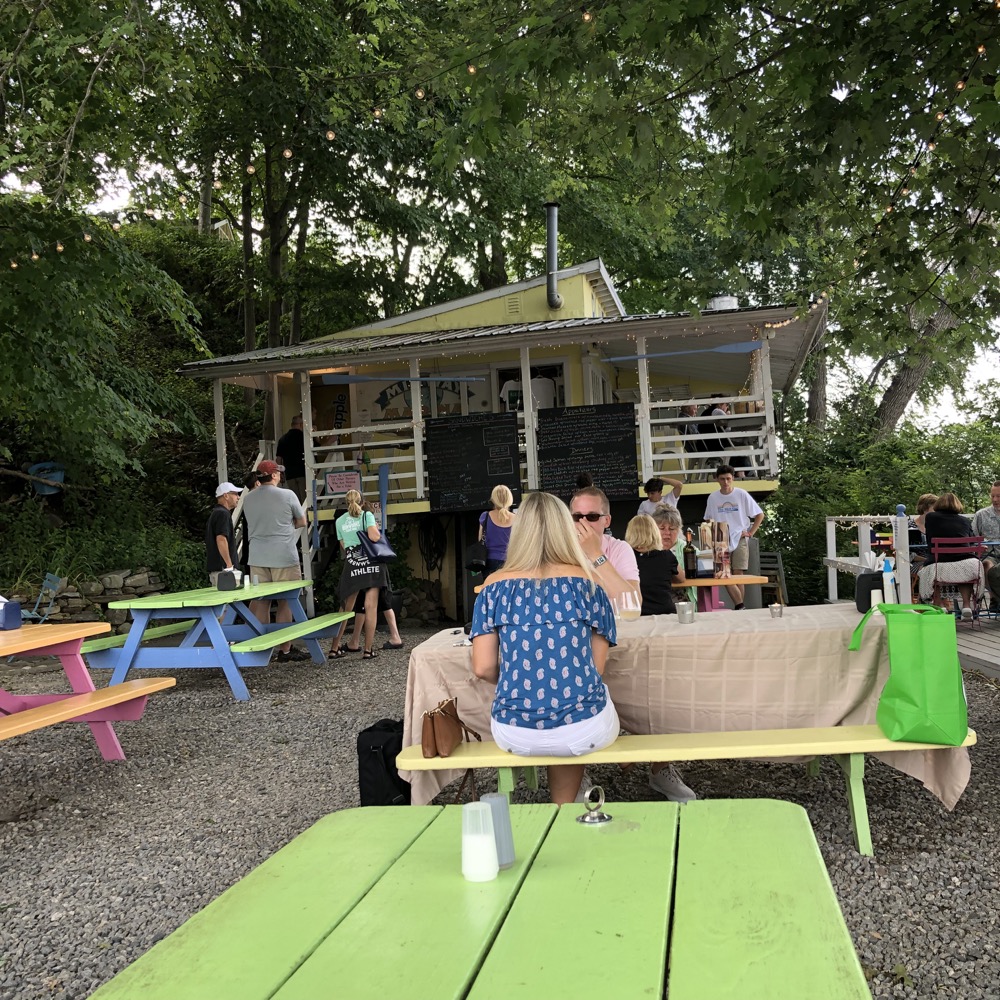 Yes, people bring tablecloths and candles and the whole bit

But when a well-researched “1,000 Places to See Before You Die” book that spans the entire country is released by Patricia Shultz, I take notice. For any Connecticut place to make that cut is a bit of an accomplishment. Enough for me to include them on this never-nominated for anything site, eat at them, and attempt to write about them.

Which brings me to a seasonal riverside shack in Haddam. 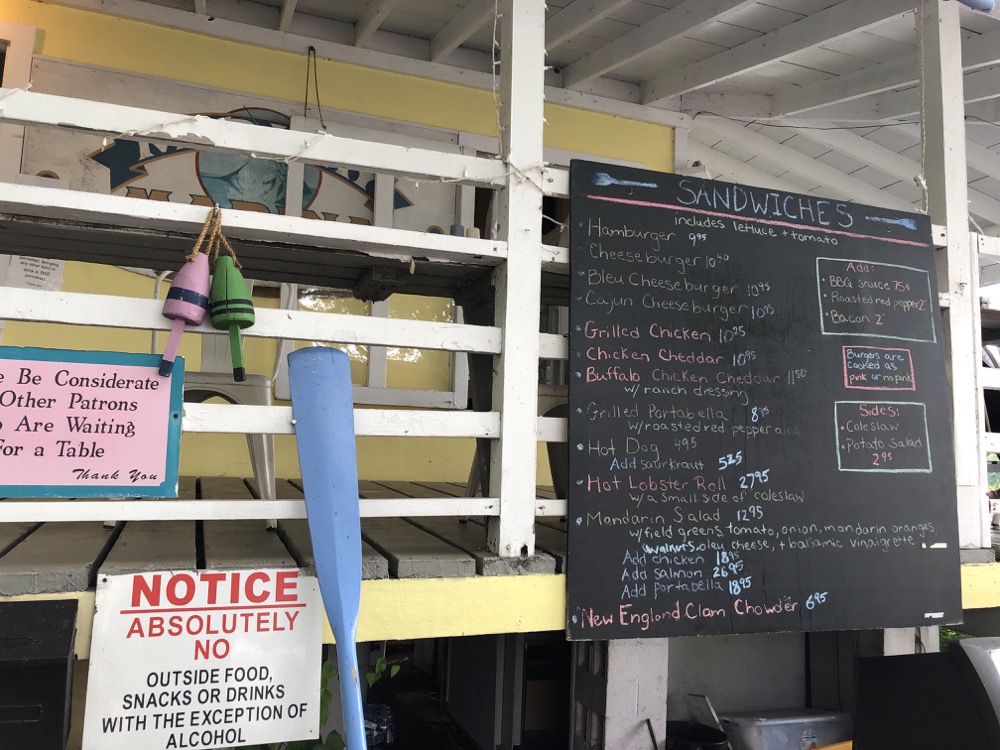 Note: this is the mid-afternoon menu, before the full dinner menu is available

The Blue Oar has been around for over 20 years and appears to have become a mainstay. This, despite the fact that it is moderately difficult to find, is adversely affected by wind, rain, mosquitos, and chill. That its system of ordering and payment is awkward at best. It’s BYOB and cash-only.

There’s only one reason it succeeds: The food is darn good. 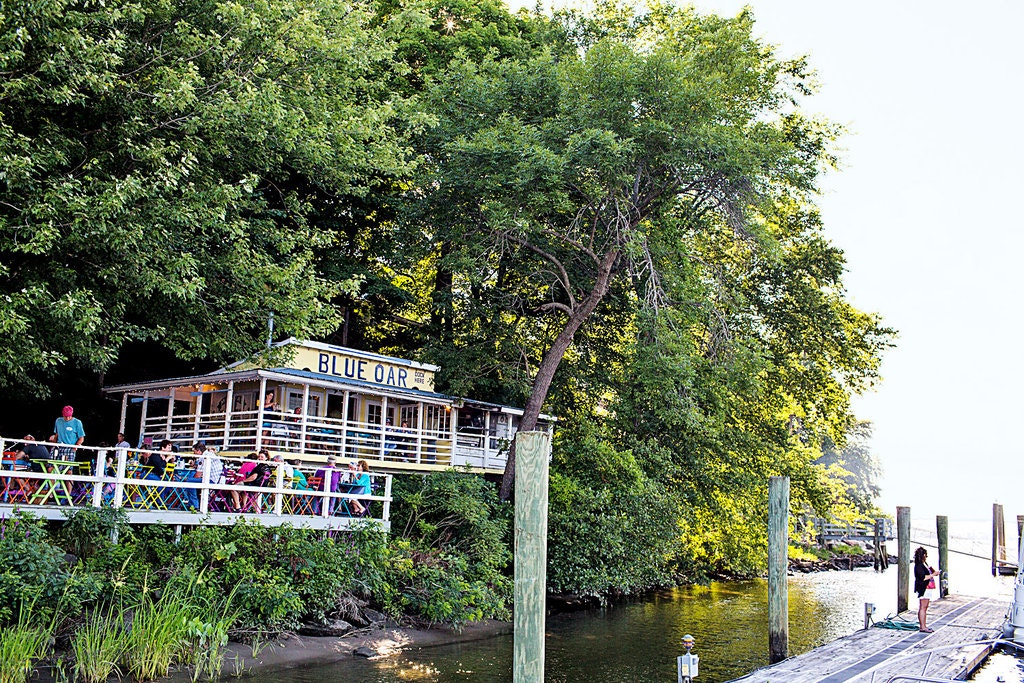 Some of the patrons arrive by boat which I suppose adds to the charm. My wife, I learned, apparently would like to own a boat. I’m not sure when in the world she plans on using the hypothetical thing, but there you have it. My wife would like a boat. I just wanted some food.

The vibe here is sort of Caribbean. You are at the mercy of mother nature, the main business building is raised up on stilts with giant wooden slats that open and close. The color theme is a rainbow of pastels. Reggae music plays often. 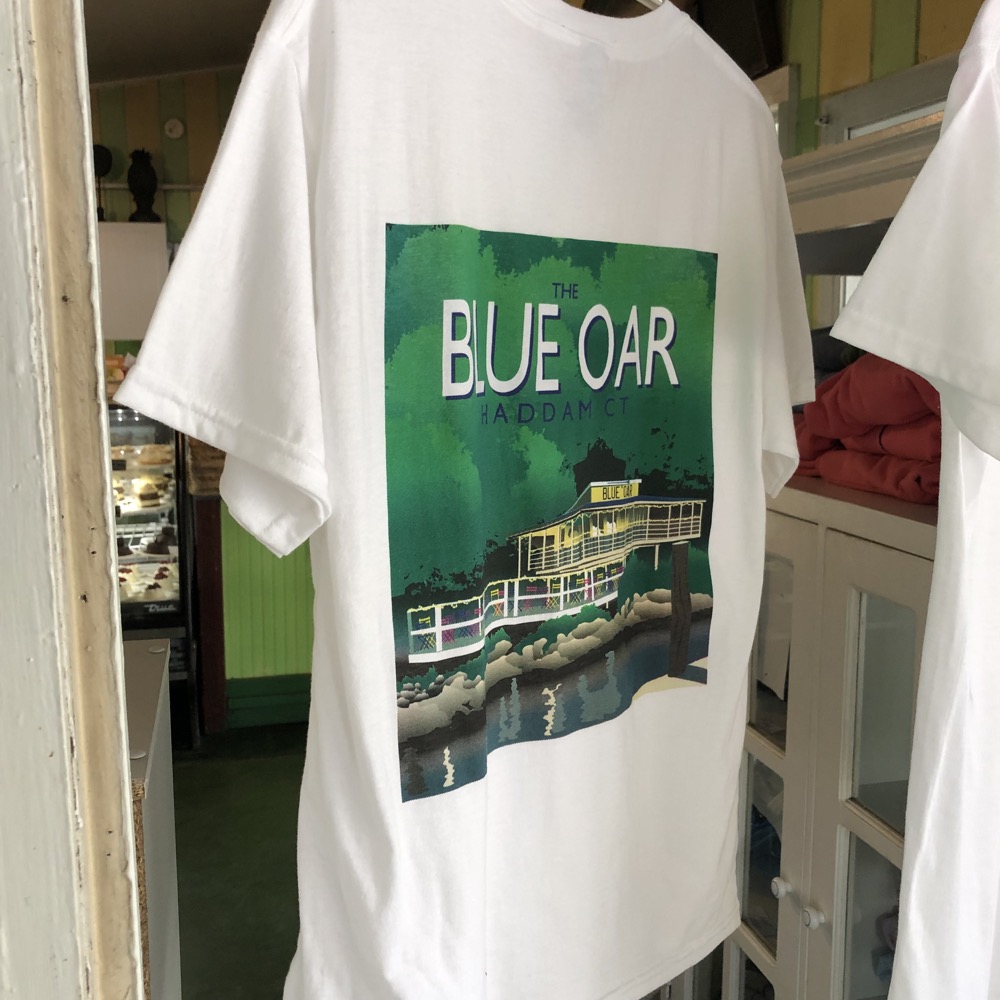 The Oar began with one guy and his wife cleaning up a storage shack, paining it a pastel yellow, and installing a home refrigerator and grill. It was as low-key and small an operation as you can imagine. But the owner/cook, Jim Reilly, gained fans. So he and his wife Jody expanded. There’s now professional stoves and grills and fridges hidden behind the front of the house.

Boater wannabe Hoang and I swung by here on a summer Saturday evening. Yes, we had an actual, honest-to-goodness date! We were coming from Crystal Ridge Winery in Glastonbury, and I had the brilliant foresight to purchase and bring a Crystal Ridge bottle along with us. We arrived just before dinner service officially began; when the menu changes over from sort of pubby food to legitimate sit down restaurant fare. 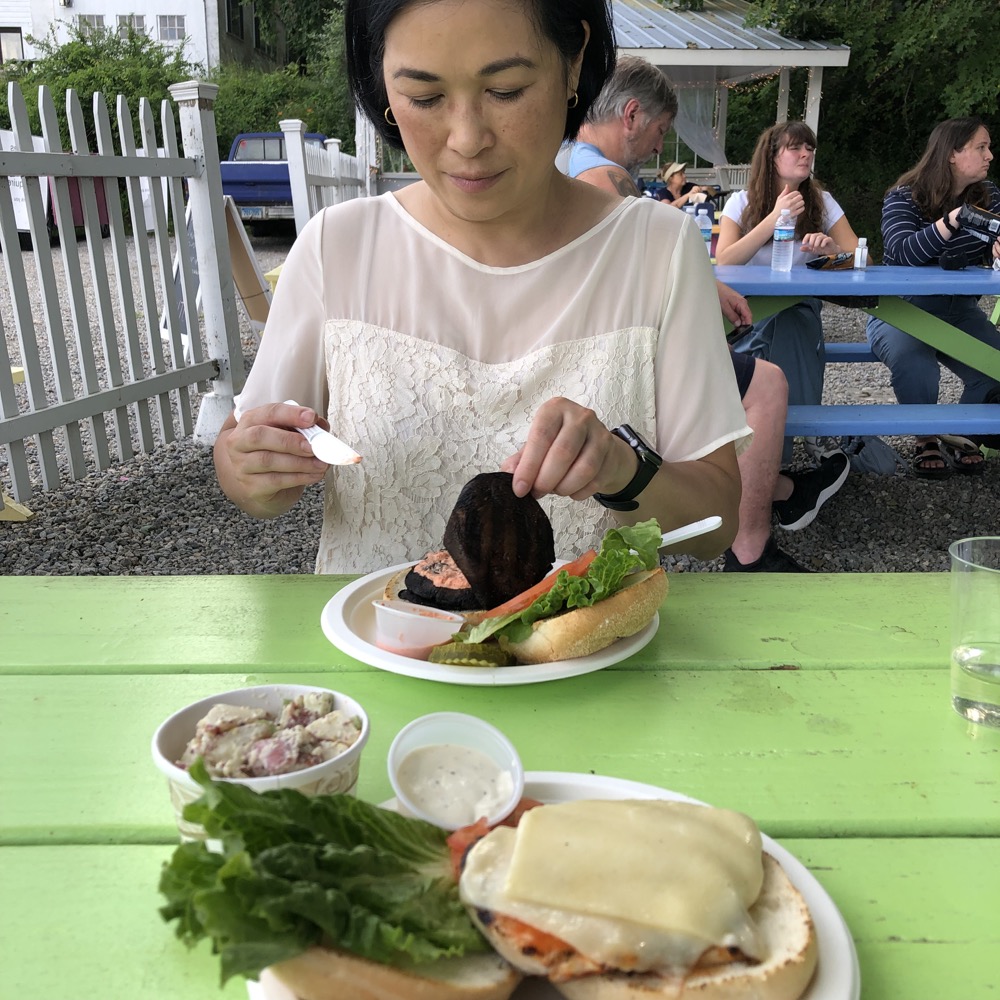 This was purposeful on my part, as The Blue Oar is first-come, first served and we had things to do. (Lines form often.) We’d been here before and have had some surprisingly good seafood dishes and lobster rolls and have always been pleased. But that was before I decided to chronicle this particle list of restaurants which means there are no pictures of those meals which makes us all question if they had even ever actually happened.

Captain Hoang enjoyed a portabella burger and I, the first mate, had a buffalo chicken sandwich. Our meal was paired with a bottle of Sauvignon Blanc from Crystal Ridge. Kind of a perfect meal, actually. Then we ran into good friends of ours! We chatted with them as we waited for our food, which came out very quickly. 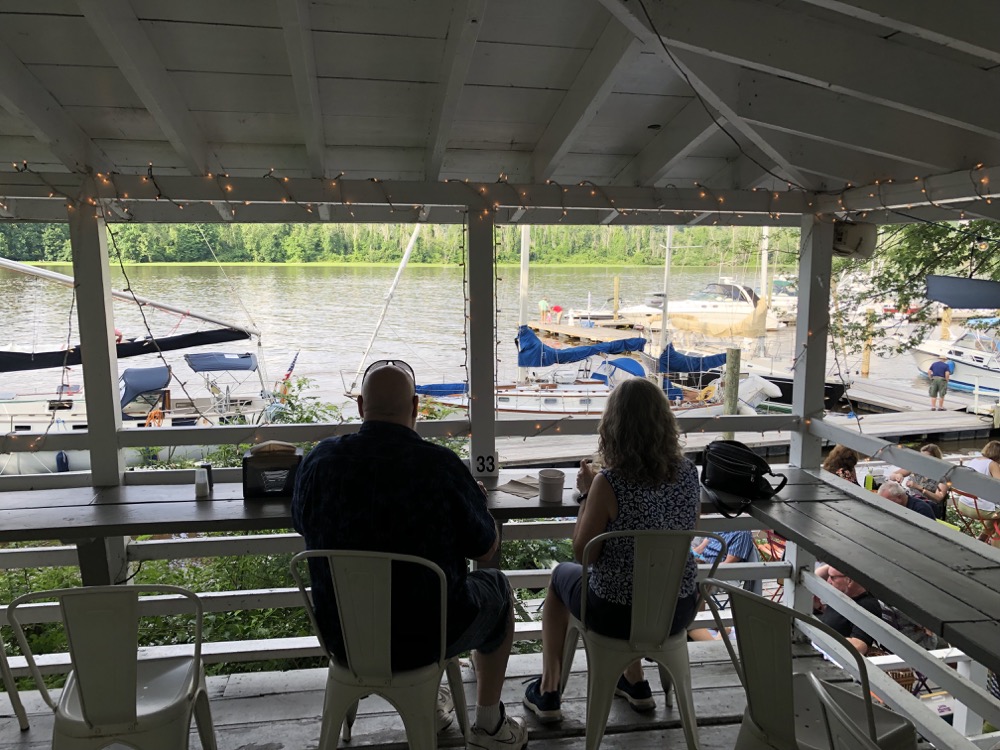 My chicken was moist and tender. The little cup of potato salad was seasoned well and had a good firmness to it. My favorite sailor’s mushroom was also very well prepared, and the rolls they use here stand up well to the juices of the sandwich.

We were served by a young man. Then we were checked on by a young man. Then plates were cleared by a young man, while a young man picked up some trash on the ground. Wait, these were four different young men?! Admiral Hoang was genuinely freaked out, because all four of them looked exactly the same. She’s never entirely comfortable in the back woods, even among friends in the middle of Connecticut. This quadruplet situation only amplified her concerns. She demanded I take a picture to prove there were four of them and we weren’t witnessing an X-File. Welcome to CTMQ, boys. I never thought your existence was weird. Must by my wife just getting her sea legs. 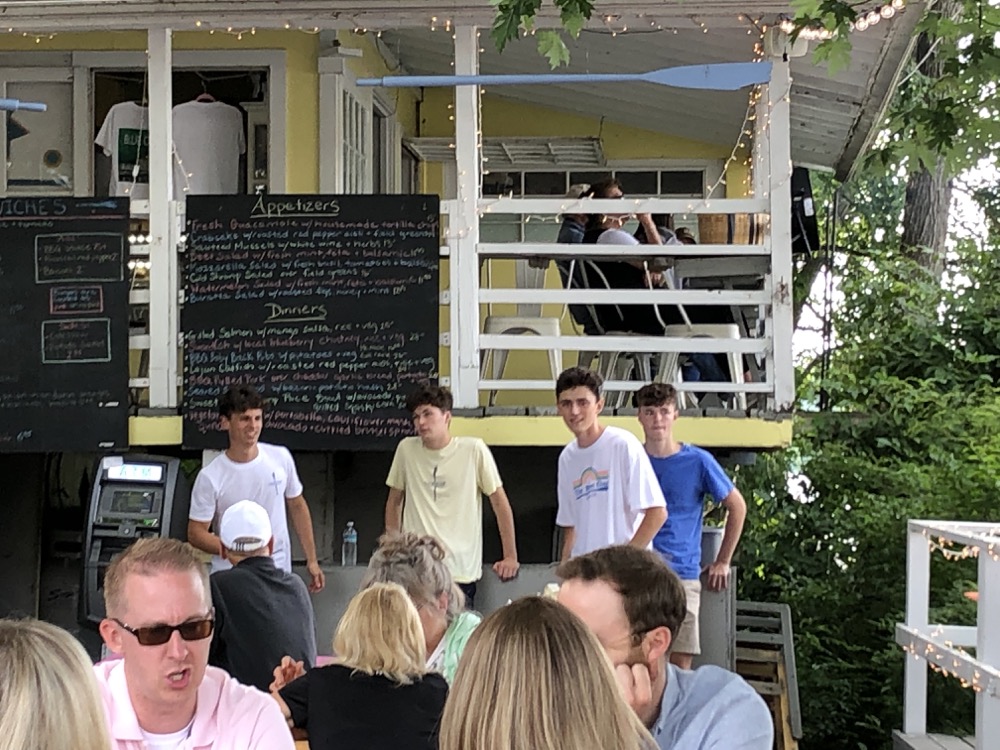 During previous visits, I’ve been slightly annoyed with the teens’ inattentiveness and the weird ordering and paying processes, but once you experience it, you no longer fret about either. (You pay when you’re done and it always feels like they’ve forgotten about that bit.) It’s just too nice a setting. As darkness falls, the twinkly Christmas lighting provides the perfect complement to the sloshing of the mighty Connecticut and the last drops of a bottle of wine. You can have a decent meal, outdoors, in shorts and flip-flops. You may run into friends like we did, but more likely you’ll make new ones – if only for an hour.

The Blue Oar has quietly – very quietly – become an institution in Connecticut. It is unique and the quality of the food is surprisingly good. Sure, you have to make a small effort to find it – and bathroom availability is an issue… but those are minor quibbles when you can escape for an evening in Haddam. 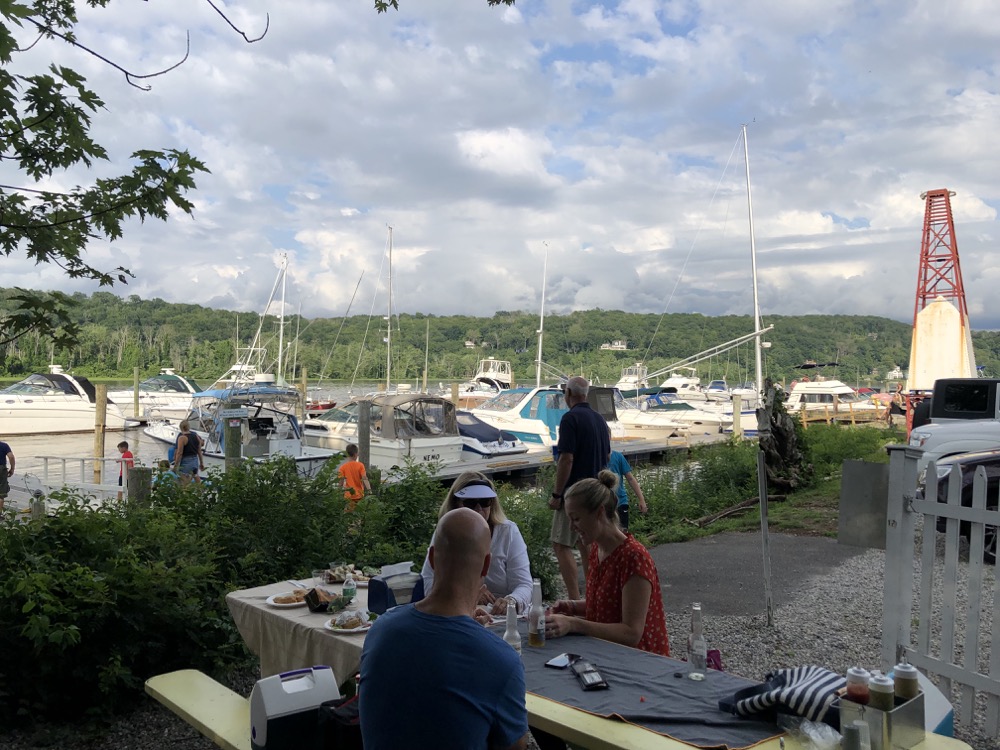 The Blue Oar
CTMQ’s 1,000 places to see in the United States Before You Die List