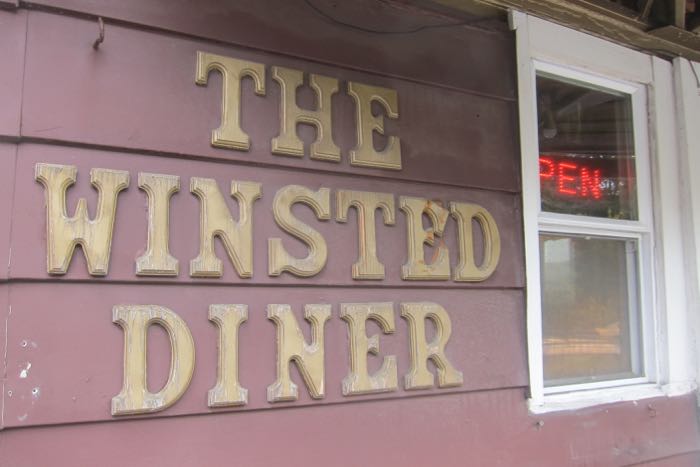 Ever since I first saw this teeny tiny little teensy diner right on 44 at the western end of Winsted’s downtown business district, I have wanted to eat here. For a few years, I honestly didn’t believe this was even a real restaurant.

I have a brother-in-law who lives in Winsted, so I asked him. He sort of chuckled and mumbled something about an ownership change and it not being too bad and that meals were served on paper plate with plastic utensils. 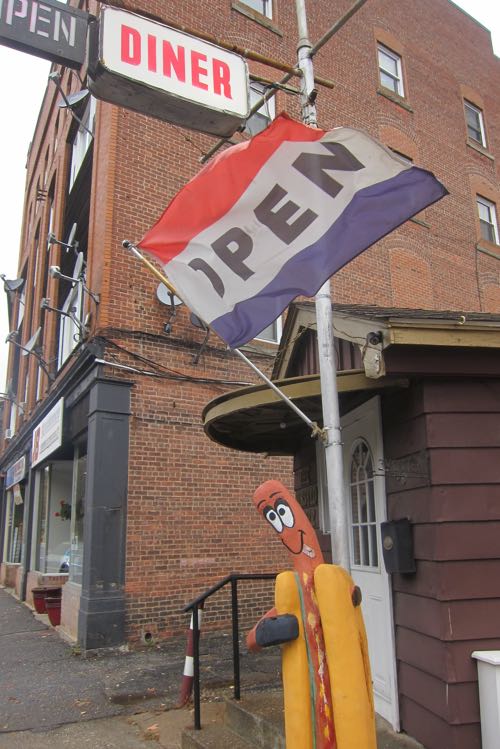 I asked my famous Winsted friend, WNPR’s John Dankosky about the shoebox grille and he chuckled and mumbled something about it not being too bad and that meals were served with plastic utensils on paper plates.

I would have loved to have asked my man, even more famous Winstedite, Ralph Nader about this dollhouse diner, but I’ve never had the chance. 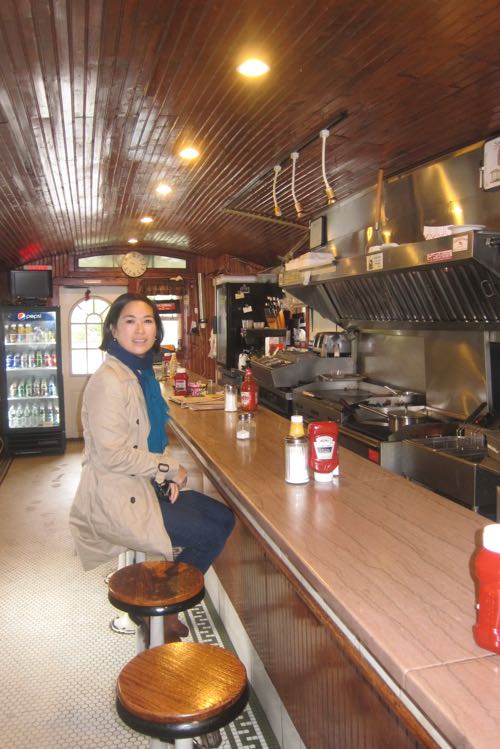 I can, literally, wrap my arms around the front of this restaurant. Like, touch each side of it with my fingers at the same time. A few men could probably flip it over. One burnt piece of toast would make the entire restaurant unbearable.

This is the smallest restaurant I’ve ever been in. (For those of you familiar with the Quaker Diner in West Hartford, the Winsted diner is about 1/8 of the size of that.)

The time had come: a day off from work for both myself and my better half. We do this every October and I usually don’t tell her what’s on the docket. I imagine she had grander breakfast plans on her mind as I parked in front of the toy diner.

But, she did marry me, so she simply said, “I’m hungry” and we went inside, careful not to pull the door too hard for fear of pulling the entire place off its foundation. 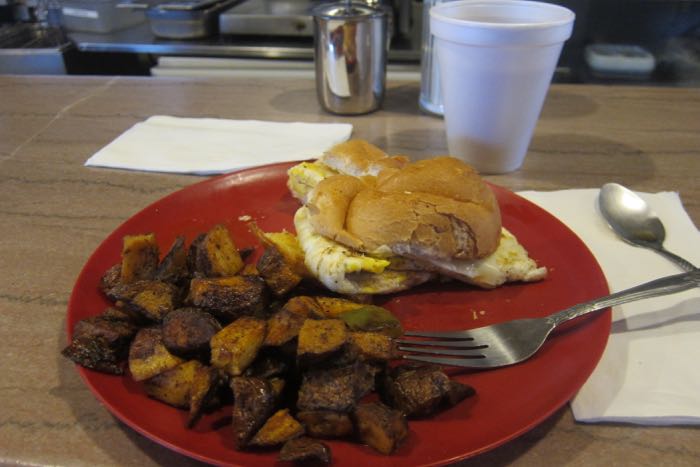 Nope, there’s no TARDIS-like quality about this place. It really is as small as it looks; with only a counter at which to eat and maybe 18 stools at which to sit. I took a seat, and leaned back against the wall while resting my feet up on the opposite wall.

The proprietor showed up from somewhere down the street and began cooking our eggs and I swiveled my head around the read the walls. This place has been around for quite a while.

The Winsted Diner has been in operation since 1931 and is one of the longest continually running restaurants in the Northeast and is considered to be a local landmark! The Diner was shipped on a flat-bed rail car from New Rochelle, N.Y. and placed on a prepared foundation. The interior still retains some of the original fixtures and finishes such as the tile floor, marble counter and wooden stools.

The Winsted Diner survived the Flood of 1955 and an interior fire in December of 2005. The Diner was repaired and continues to serve generations of local customers as well as new visitors every day. It is our intention to provide our customers with great-tasting, quality food combined with a comfortable and friendly atmosphere. 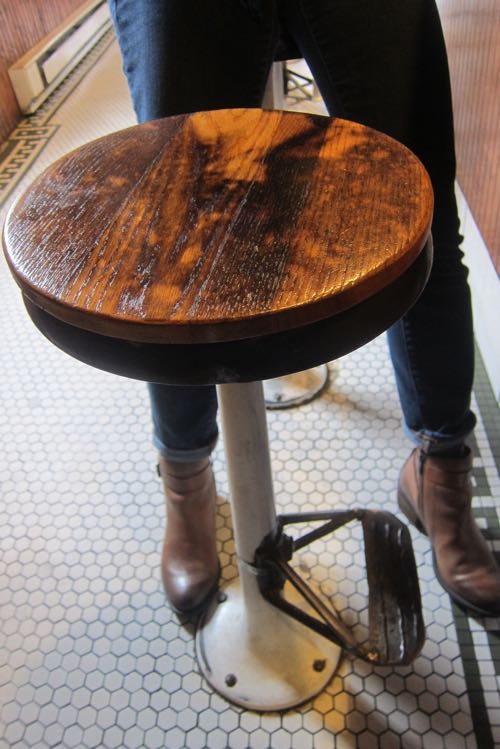 The diner itself was clean enough, but don’t expect perfection. We were given coffee in Styrofoam cups. BUT! our utensils were metal and our plates were… I don’t know. Sort of that hard plastic material that can be used for 40 years.

And hey looked like they’d been used for 40 years.

My egg and cheese sandwich on hard roll was delicious. My homefries were as good as any others I’ve had. Hoang polished off her omelet in record time. We chatted with the cook guy, who I must assume is the owner, who is also a big “Price is Right” fan. We got the low down on how the games work. He got me to buy a local Elks Club raffle ticket. 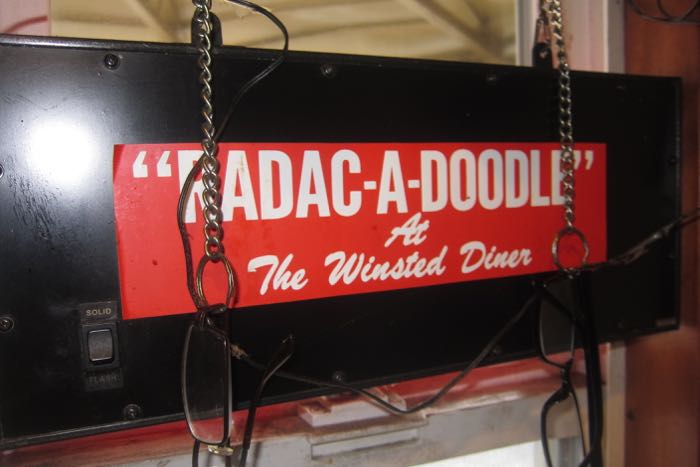 The microscopic diner has a rather large food challenge within it. They call it the Pancake Challenge and it’s basically a ton of eggs and cheese and various meets and butter and syrup all wrapped up with two giant pancakes. you have 45 minutes to eat it. Twenty years ago I could have taken this down. They also serve the The Ra-Doc-A-Doodle (“a Winsted Diner Legend”) which is simply “scrambled eggs with sausage and cheese on a sandwich-sized english muffin.”

It’s got a cool name I guess.

Anyway, I over-tipped him, because I felt kind of bad that we roused him from wherever he was to come cook us 11 dollars worth of eggs and potatoes in his Lilliputian greasy spoon. 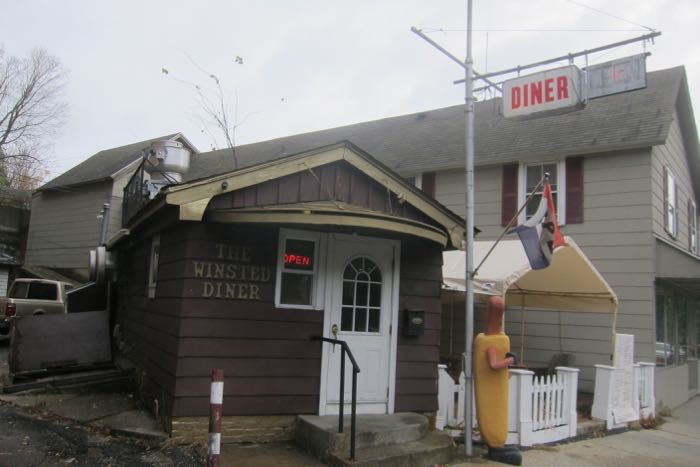 The Winsted Diner is great. It’s cheap, it’s clean enough, the service is friendly, the parking is free and really, it’s just cool to say you’ve eaten in one of the smallest joints in New England.