I have good news and I have bad news. First, the bad news:

The Menczer Museum of Medicine & Dentistry is closed to the public as of October 1, 2008. We are packing the exhibits in preparation for the move to The University of Connecticut Health Center in Farmington later this year. The displays will be changing and not all items will be on exhibit as in the past. Some parts of the collection will be at the Tunxis Community College and the local hospitals. The Fones School of Dental Hygiene will also have some significant pieces from the dental collection.

This museum DID reopen in September 2009, albeit in a smaller form, over at the UConn Health Center in Farmington. CTMQ Visit here. 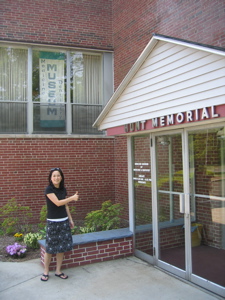 I love my wife. Hoang and I met in early 2000 and hit it off immediately and continue on strongly to this day. We got married in 2003 and have enjoyed married life. Oh yeah; we got married on May 25th four years ago. As has become customary, we both took the day off from work, dropped our son off at his grandmother’s, and set about to enjoy our special day.

It was a lovely Friday – sunny and warm. We had plans to have lunch at a nice restaurant in Hartford and looked forward to spending the afternoon luxuriating and pampering each other. So I thought to myself… “Self,” I says, “what better way to show Hoang how much I love her than by taking her to learn about the rich history of American medicine and dentistry?” 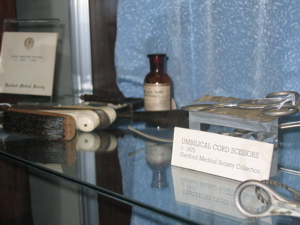 For years we’ve been going down to Delaware to visit my family and I’ve been teasing Hoang with the idea of going to Philly’s Mutter Museum, which houses the most comprehensive collection of medical paraphernalia and grotesqueries in the country. For some reason, we’ve yet to visit, so I figured Hartford’s Menczer Museum of Medicine and Dentistry would be a suitable substitute. I was giddy in anticipation at how happy she’d be about the surprise! 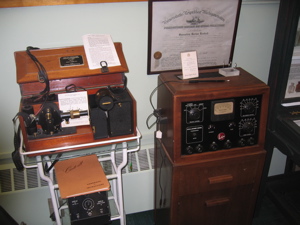 As we drove through the beautiful neighborhoods in West Hartford and Hartford’s West End, with all of the massive old victorians, foo-foo day spas, and ritzy wine bars, I could see the excitement in Hoang’s eyes. We ambled down the incredible Scarborough Drive… looked into each other’s eyes… smiled about our unspoken bond… and pulled into a nearly empty lot in front of a rather nondescript brick building; The Hartford Medical Society and the Menczer Museum of Medicine and Dentistry! Awesome! 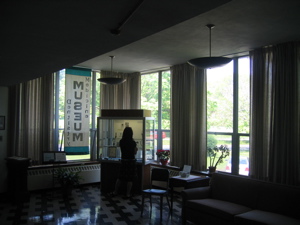 Hoang leapt into my arms and planted a kiss full on my lips. “What more could a girl ask for on her anniversary?! Old medical instruments, old dental chairs, and a bunch of old glass eyes?! Let’s get to it already!” The first is the paper anniversary, the 25th is silver, 50th is gold… and a little known fact: The 4th anniversary is the Weird Museum Anniversary!

Our initial excitement was tempered by a locked door, but we were immediately greeted by a savior who welcomed us. She quickly explained the room before us and mentioned something about some other rooms but we weren’t listening. As she disappeared back into her office, she mentioned that she always said “Good Morning” to the large painting of Horace Wells. Hm… we’d never heard of him – but we were here to learn. 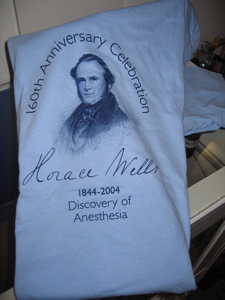 I immediately noted the doctor’s waiting room couch placed in the museum, which obviously fit very well. The first display case displayed a bunch of old stethoscopes. I wouldn’t mention this except for the fact that the name of the guy who invented the stethoscope in 1816 was Rene Theophile-Hyacinthe Laennec. At least his invention wasn’t named after him. I was also surprised at how long it took the brilliant doctors of the day to realize that having the tubes go to both ears allows the stethoscope to work twice as well.

The next display was about ob-gyn history. Modern day ob-gynery is a bit draconian to me. 150-year-old ob-gynery is, in a word, terrifying. There was a cute little figurine from the 1940’s that was of a obstetrician with the saying, “Awake my child… don’t embarrass me.” And ladies, I hate to tell you that stirrups really haven’t progressed much since doctors learned what a uterus was.

There were other cases with various weights and measures, old collections of medical instruments, syringes, and different scary scopes of various sorts. I also learned what a lithotrite is; a horrid little device for crushing bladder stones. Oof. But then it was on to the History of Ophthalmology viewing case. 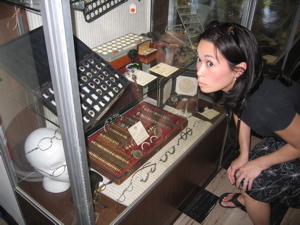 Jeepers, Creepers, where’d you get those peepers…

Eyes have always sort of freaked me out – I could never wear contact lenses because I could never stick my fingers in my eyes. And here I was, staring down an enucleated eye socket inserter from 100 years ago, right next to the gigantic hard contact lenses from 1945. This whole area of the museum made me shudder – and that was before even noting the whole tray of glass eyes staring at me. Hoang noted that there were none that captured the beauty that are MY yellow-tinged blue eyes. Oh well, you can’t recreate perfection anyway. 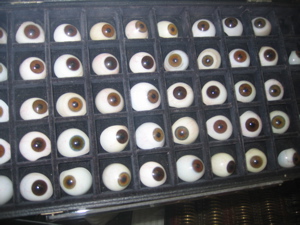 [This and the following footnotes are references to movies. Play along and figure them out – answers in the links at the bottom.]

I poked around the corner and found a neglected old ophthalmology chair that looked purely evil: 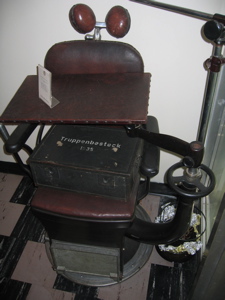 Appy Polly Woggies, put your gulliver in here so’s to have a viddie at your glazzies2

I noted a sad little pile of Menczer Museum t-shirts that I would have to guess aren’t bought all too often. But they should be! And this place should be on everyone’s itinerary – if only to see the next case of Civil War era implements of torture – errr, surgery. Some of the bone saws were bigger than the ones I have at home to cut down trees. The trachaea bristle probe was the size of a toilet brush. And then there were the clysters… oh, the clysters. What’s a clyster? I’ll let Wikipedia explain it:

Clyster is an old-fashioned word for enema, more particularly for enemas administered using a clyster syringe – that is, a syringe with a rectal nozzle and a plunger. Clyster syringes were used from the modern era to the 19th century, when they were largely replaced by enema bulb syringes and bags. 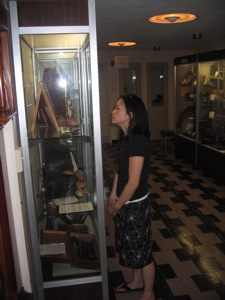 The patient was placed in an appropriate position (kneeling, with the buttocks raised, or lying on the side); some servant or apothecary would then insert the nozzle into the anus and depress the plunger, resulting in the liquid remedy (generally, water, but also some preparations) being injected into the colon.

Clysters were administered for symptoms of constipation and with more questionable effectiveness, stomach aches and other illnesses.

Continuing with that article, I must note:

In the 18th century, Coffee clysters were taken by some people who wanted the effects of caffeine but disliked the taste of coffee. Tobacco smoke clysters were administered to fainting women, hence the phrase “to blow smoke up her a$$”.

And that’s why I love Wiki – there’s always that question of whether what you learn there is true or not. (This is true though.) Also true is that Horace Wells discovered anesthesia and how it could be used to assist with surgery. Earlier, the docent mentioned that she says hello to him (his 1899 painting by Noel Flagg anyway) and now we learned who he was. A Hartford native, Dr. Wells was a fascinating man. Brilliant, but disturbed, he stumbled upon the nitrous oxide application and later became an addict of various chloroforms and anesthesias. But at the time, no one who needed a tooth pulled or some minor surgery performed cared about Wells’s personal shortcomings. 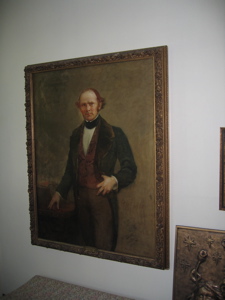 At that point, Hoang and I pretty much figured we were done with the museum. “That was pretty cool,” we thought. We peeked around the corner beyond Wells’s portrait and found an entire new room! A different woman appeared from nowhere to happily greet us. Were we doctors or dentists or at least studying to be one or the other? “Uh, no. We’re just going to every museum in the state.” With that, the lady turned tail and ran back to hide in her office. 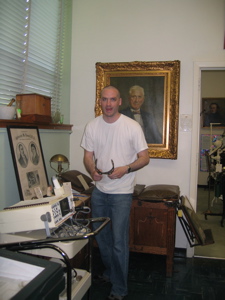 Actually, she stuck around long enough to show us an antique examination table that was in pristine condition. Once she left us, we were free to explore the room by ourselves – which was good because we’re – well – we’re goofballs. And when you stick us in a room with a bunch of old medical instruments with a camera in hand, it’s best you leave us alone. First generation EKG’s, first generation anesthesizers, old surgeon tools and tables, a working Bircher Diathermy Coagulation Unit… Just when we had had more fun than a couple should be allowed to have on their anniversary, we found a THIRD room! 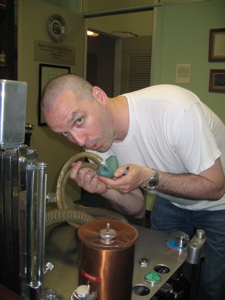 Mommy! Get me a Pabst Blue Ribbon!3

Oh my. I fully expected The Gimp4 to appear, as this was surely a freakish sort of sadistic torture chamber. I had a visceral response upon seeing the history of dentistry displayed before me. This was the Horace Wells room and was seriously scary. Sweat beads formed on my brow as I turned left and saw tooth extractors, to the right was a pediatric dentist chair from the 1950’s. I shuddered. Hoang explained the history of bridgework to me and I sifted through some old amalgam. I swear, this whole room was downright medieval. Did you know that George Washington’s first dentures were human teeth (not his) set in an ivory plate? Me neither. 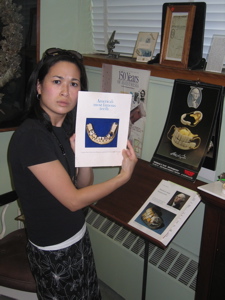 Hoang was a bit grossed out by George Washington’s mouth 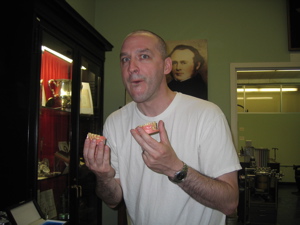 Wow, that room was really something. There was actually a whole other wing of the museum – a large research library – that we didn’t explore. On our way out, I thanked the first woman and asked her out of curiosity, “What’s the most unique or interesting thing here?” It turns out that it wasn’t something we’d even seen: Every issue of JAMA since number one. She was quite excited about this to say the least. 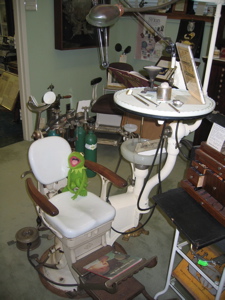 We continued to chat and before we knew it, we were being ushered into the secret back room. Oh my… a House of Horrors! This storage room held about 20 more old dental chairs (among other things) as well as stacks of books and other random instruments. We talked some more and learned about the museum’s genesis and probable sad future. The Hartford Medical Society’s numbers are dwindling rapidly as the younger generation is not keen on meeting like the old days. No one is visiting the Museum anymore. Funds are very hard to come by. They’re closing soon.

What?! Yup – they’ve already been shopping the ugly brick building on the market, but are finding it hard to sell for a variety of reasons. It’s zoned oddly, it’s on one of the more expensive streets in the state, and, well, it’s really an ugly little building. Apparently the most viable taker today is a Chinese Baptist church. This is such a shame, because the Menczer Museum is a very interesting, very informative, very cool little place. If I were rich, I’d probably help this place out. 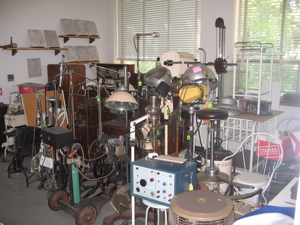 “I thrill when I drill a bicuspid / It’s swell though they tell me I’m mal-ad-just-ed.”5

And so, we left with a sad feeling and the gnawing knowledge that this place won’t be around for much longer. Oh sure, UConn will get the JAMA issues and the Wadsworth will take the Wells portrait and some other museum may take a few of the medical instruments for display. But the spirit will be gone and another treasure will be lost.

After viewing this place and after mentally reviewing my horrid dental history (and sharing root canal stories with the docent), I took this picture home to Damian to start searing the idea of good dental health into his brain at a young age. 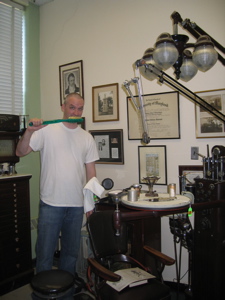 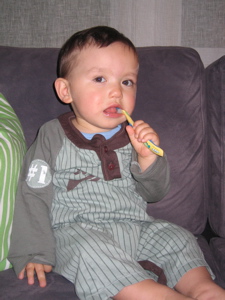