Cripes, I Barely Had Time to Read the Menu
Traveler Food and Books, Union
June 1, 2011

My list of “Places in Connecticut I’ve wanted to visit for a very long time but never have” is probably much shorter than CTMQ readers would imagine. Traveler Food and Books is at or near the top of that list, as I’ve been passing its towering “FOOD AND BOOKS” sign along the northern stretch of I-84 since I was in college in the early 1990’s. I remember learning all those years ago that it was just an average restaurant – but with a very unique and very cool twist: Each diner was free to take a book to go. No, you don’t even have to bring one to get one; you just get one! 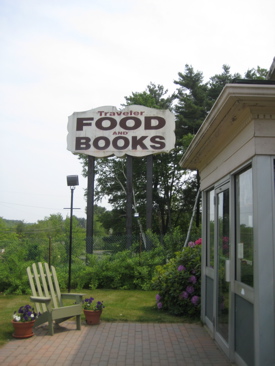 My excuse for never having gone here before is merely geographical. Union is at the Massachusetts border and – you know what? I can’t use that excuse since anyone who has spent 4 minutes on this site knows I drive all over Connecticut all the stinkin’ time. Kids. It’s the having kids thing. That excuse always works.

Anyway, I was off to Boston for a business conference and figured I could make a pit stop for some lunch and even bill it to the company. So that’s exactly what I did. Now, I’d guess similar establishments exist elsewhere around the country, but I’m not sure they include it in their business model, let alone their restaurant’s name. (In fact, the little fishmonger we patronize in Avon always has a rotating selection of books for the taking and there’s usually one that interests me. But I just checked and nope, they don’t mention this perk on their website. And a quick check of the Intertubes turns up no real competition. 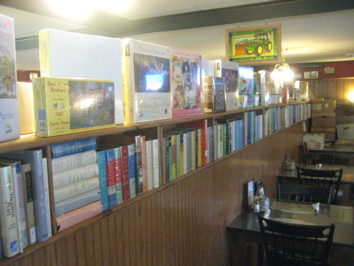 I stopped in the nearly empty restaurant (I arrived in between breakfast and lunch) which was excellent as far as I was concerned. Now I could peruse the very neatly arranged bookshelves and see what this place was really all about. Heck, when you get one free book, you want to make it one darn good book.

Of course, you’re not going to find books that the restaurant feels they can actually sell in their small downstairs used book “store.” No, there are some very odd and very random books on offer for free. And since Union is kind of a weird town (with less than 900 inhabitants), you can expect some weird books. 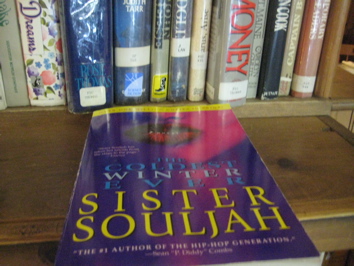 Fine by me. I thought about grabbing a Sister Soulja’s book, but remembered that I wasn’t an ironic hipster and no one here would appreciate my ironic hipsterism. And believe me, ironic hipsterism won’t reach Union until… well, never. Again, this is fine by me. So I grabbed The New York Times Everyday Reader’s Dictionary of Misunderstood, Misused, Mispronounced Words which I thought would make for some light reading while I chowed down my veggie omelet. Unfortunately, like I said, my time was fleeting and I had a drive to Beantown ahead of me, so I didn’t get to lounge about reading a little of this and a little of that like the five other patrons seemed to be doing.

My waitress was sweet as pie and my omelet was above average. And oh yeah, I GOT A FREE BOOK WITH MY MEAL! 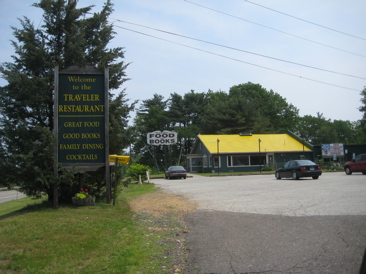 Here’s an article by Yankee associate editor and writer AND CTMQ reader Justin Shatwell. That’s right: Shatwell. It’s probably better than mine, but he does get paid for this and I only get paid in free books from Traveler Food and Books once every 16 years. ( I should note that the number of free books seems to fluctuate from one to two to three to one over time.)

Only in New England: ‘I’ll Have the Turkey Wrap with a Side of Grisham’
Traveler Food and Books is the anti-fast-food restaurant

Off exit 74 on I-84, the quizzical yellow sign that reads Traveler Food and Books is, if nothing else, aptly descriptive. Millions see it every year, but those who stop in tiny Union, Connecticut (population 700), to investigate find an old, wood-paneled restaurant littered with books crammed into shelves and cubbies. It feels a little like eating in a used-book store, with the notable exception that here all of the books are free. Well, up to three per customer per trip, that is.

Martin Doyle, the original owner, started giving away books to diners in the mid-’80s as a way of cleaning out his own cluttered home. When Karen and Art Murdock took over in ’93, they expanded the tradition and, in the process, established their restaurant as a sanctuary for unwanted books. They come from all over–leftovers from church sales, bookstores that are closing, library extras. Wherever there are books in need of a home, the Murdocks are there with an empty horse trailer and a couple of hand trucks to cart away as many boxes as they can. Some mornings they arrive at the restaurant to find bundles of orphaned books on their doorstep. “People just would much rather see them go somewhere than in the trash,” Karen says. Although “there are some books you can’t even give away free,” Art admits, most are just looking for the right owner. He restocks the shelves daily and estimates that he and Karen have given away around 2 million free books since they started.

This piece of road culture is paradise for a certain type of traveler. It’s the anti-fast-food restaurant. The Murdocks encourage people to stick around for a while, have some pie and coffee, and let an hour slide by thumbing through a book of poetry or the biography of some mid-level celebrity.

Word of the restaurant has spread a long way. It’s been written up in Japan and South Africa, and one customer claims he learned of it from bathroom graffiti in a pub in Ireland. Some authors have poked in for a look as well. Robin Moore was a frequent guest, and Steven King is a regular. “He lives across the highway, but it’s a different guy, not Stephen King,” Karen jokes. “Still, whenever you see it on the credit card, you laugh and say, ‘Steven King’s been here again!'”

Maybe someday they’ll get a visit from the famous one. They’ve certainly moved enough of his books.

I love this place and will definitely stop here every time life allows. Darn kids. 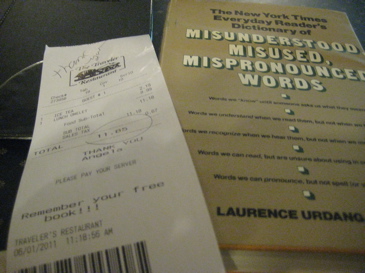