This section, notably the southernmost bit and parking area, has been cleaned up and is much nicer than the apocalyptic wasteland described below.

Of all the Sky’s the Limit Challenge hikes we’ve done, and peeking ahead to those still to do, I can say this with confidence: This is the lamest one. Sure, last year there were a couple drive-ups, which one could argue are lamer, but really… when you have two little kids they don’t complain about drive ups. 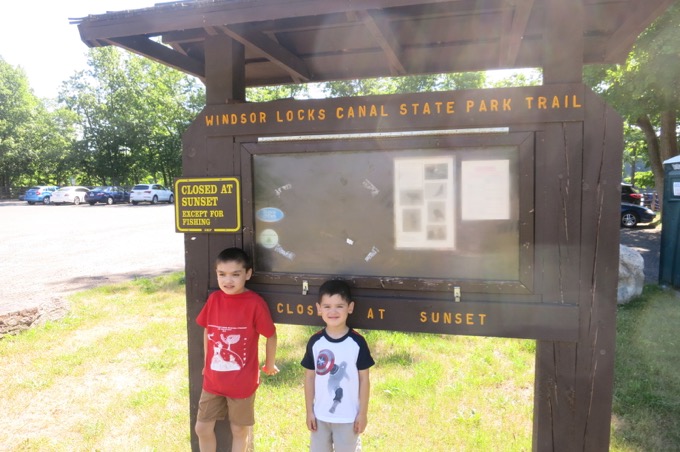 They do complain about “boring” flat hikes along stagnant old canals that they don’t attach any historical significance to though. I can’t say I blame them.

Even I found it tough to pretend we’d see something cool “up the trail” because, really, there was nothing different “up there” than there was “right here.” 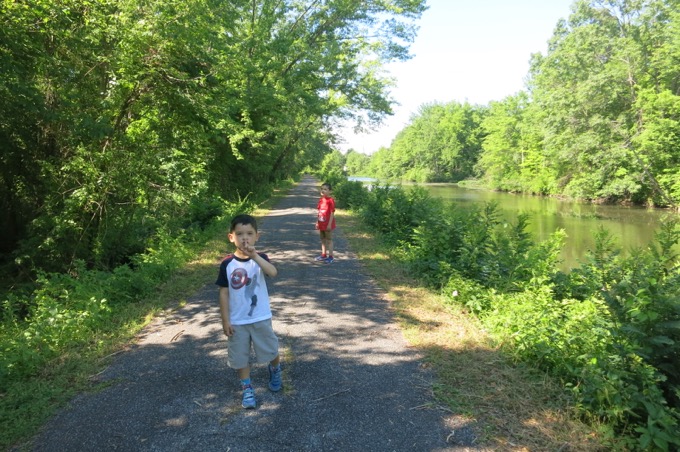 Windsor Locks Canal State Park is closed for a good chunk of the year due to nesting bald eagles. The standard closure is mid-November through March, but this year the DEEP kept the southern mile of the park closed through early July. I had figured the walk to the challenge point was a tad shorter from the southern end, so I waited it out. 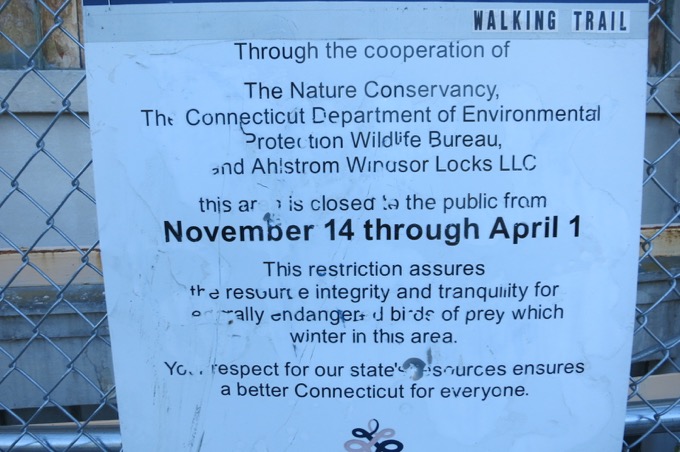 Connecticut’s Department of Energy and Environmental Protection (DEEP) today announced that the southern end of the popular Windsor Locks Canal State Park Trail will be closed through June 2016 to protect a pair of nesting bald eagles.

“Bald eagle numbers are increasing in Connecticut, but the birds are sensitive to disturbance,” said DEEP Deputy Commissioner Susan Whalen. “This pair, in particular, has historically demonstrated sensitivity to the presence of humans, and so we are closing the trail to increase the chances of a successful nesting season.”

This eagle pair has nested along the canal trail since 2011 and successfully fledged chicks in 2011, 2014, and 2015. Nesting attempts in 2012 and 2013 were unsuccessful. “The birds returned to the area in late January,” said Jenny Dickson, a DEEP Wildlife Division Biologist. “They did a little repair work on the nest and laid their first egg in late February.”

In order, the biggest challenges so far here are: 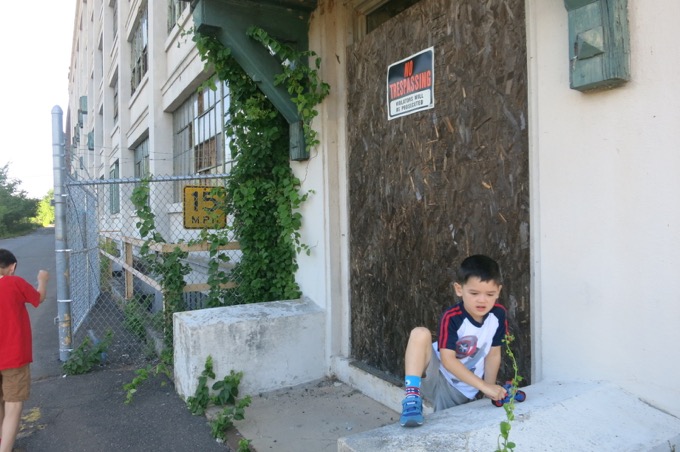 Let’s add a few more. I parked in the tiny little lot by the abandoned factory building at the corner of routes 140 and 159 next to the Connecticut River. I had no idea I was allowed to drive north along the canal for a third of a mile to a much bigger lot.

But if I’d parked there, the boys wouldn’t have been able to risk tetanus and shards of broken glass impaling them while eagerly checking out the building, which I can only assume levels of the game Fallout were modeled after. 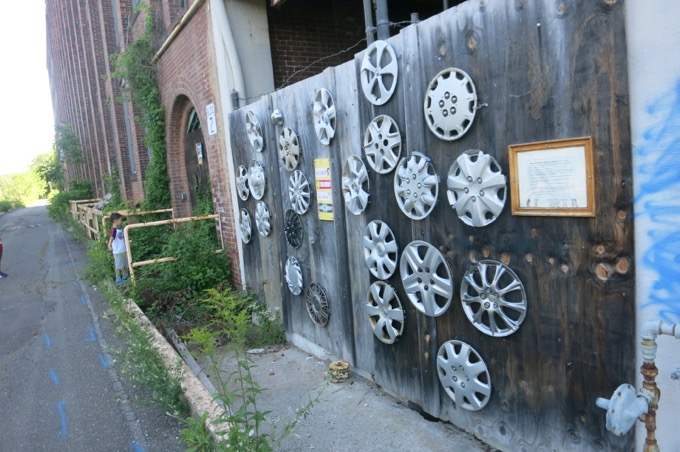 Walls of hubcaps, graffiti tags, dead animals, massive cobwebs. This hike had it all.

In order, the six biggest challenges so far here are:

We walked up the pin-straight path, passing a bunch of solemn fishermen and women who seemed thoroughly annoyed at our presence. Whatever. 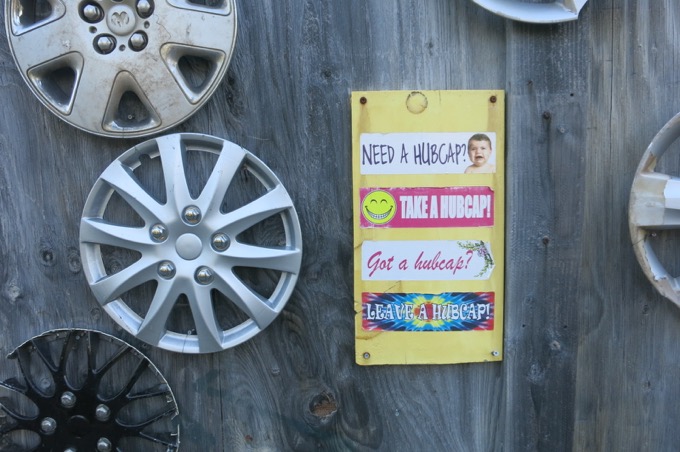 I tried explaining how locks worked to the boys, and what the ancient, rusted gears and mechanalia rotting in the fetid canal meant to history. When a blaring train rumbled by on the other side of the canal, I offered a quick synopsis of the canal-to-rail changeover and what it meant for America, and notably cities like Chicago. We saw a woodpecker at work as the sun beat down upon our heads.

In order, the nine biggest challenges so far here are: 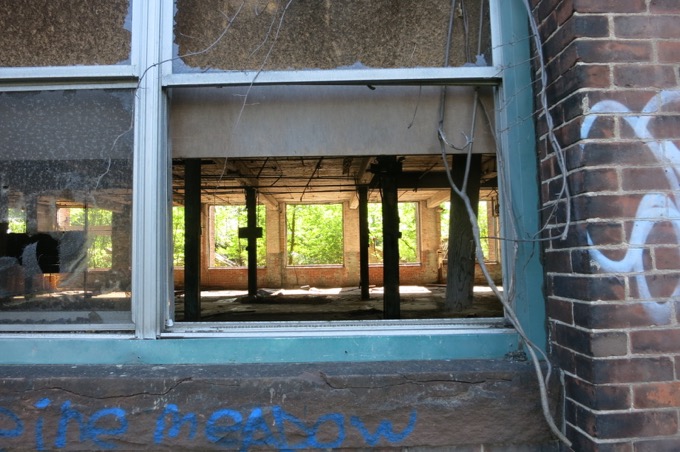 We plodded onward. Another train ambled past us, heading south. Fire engines blared across the canal. Power lines hummed above us. Damian started flipping out and Calvin began whining.

I feared this may happen, so I pulled out some interesting specifics about the Windsor Locks canal to keep them in the game. 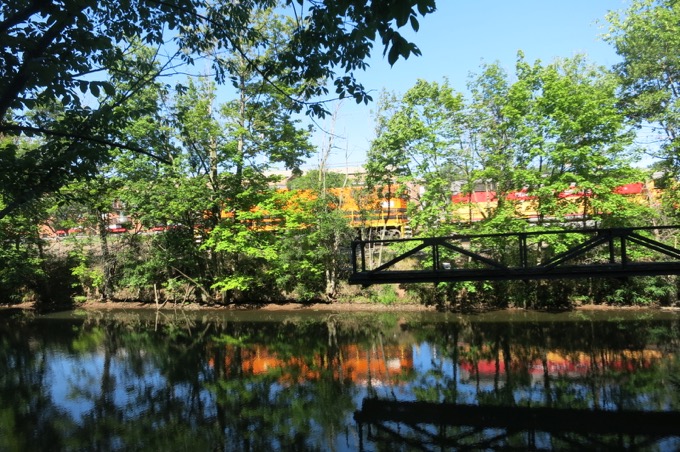 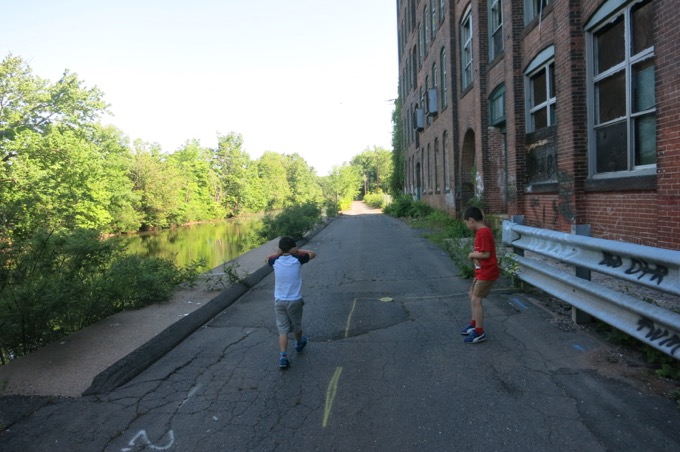 Train was too loud 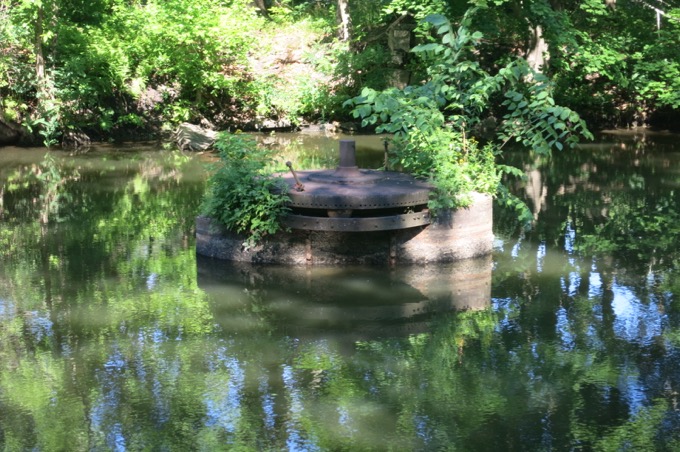 This was turning out to be quite the slog, as it’s nearly 2 miles from our car to the required photo spot – a view of King’s Island. Meaning this was an almost 4-mile walk. We passed under a railroad bridge. The southern tip of the island came into view.

In order, the 12 biggest challenges so far here are: 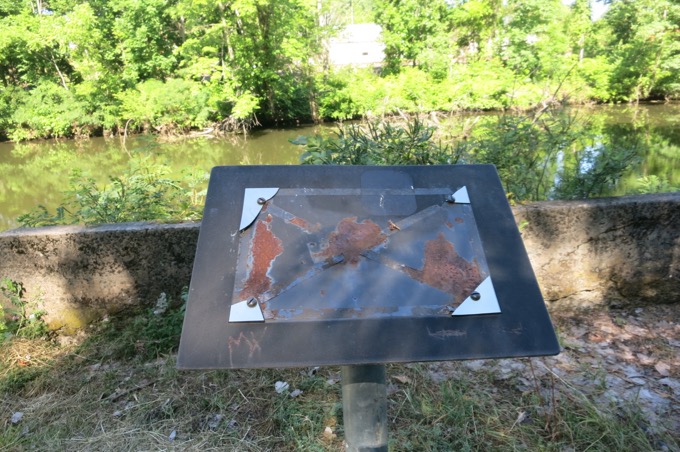 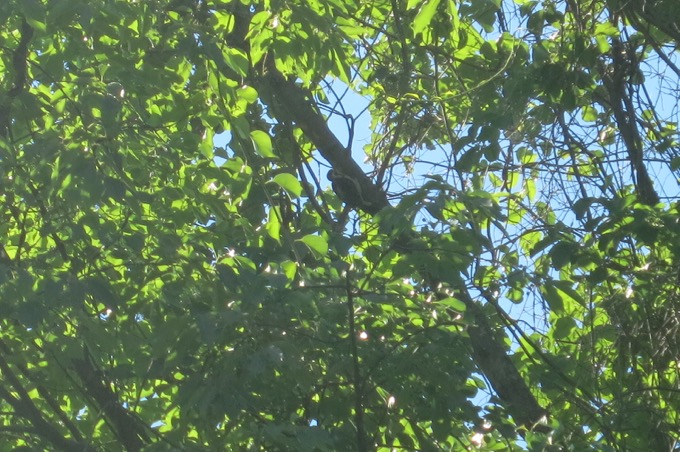 Damian really wanted to go home. Calvin did too. They staged a protest. Other walkers and cyclists gave me concerned looks.

I was prepared for this inevitability. No rocks for Calvin to practice his ninja skill upon. Too many people for Damian to feel comfortable. No obvious points on the map for them to feel as though progress was being made. As we walked next to King’s Island, I dropped this doozy on their pretty little heads:

King’s Island is accessible only by boat. During the 1800’s, Dewitt Clinton Terry lived on and farmed a large portion of the island. Terry was a member of a religious sect that believed the world was going to end on specific dates. More than once, the Millerites, as they were known, gathered on the island for the anticipated final day, only to see it come and go without incident. There is still evidence of his farmhouse, barns and stone walls that can be found throughout the island. 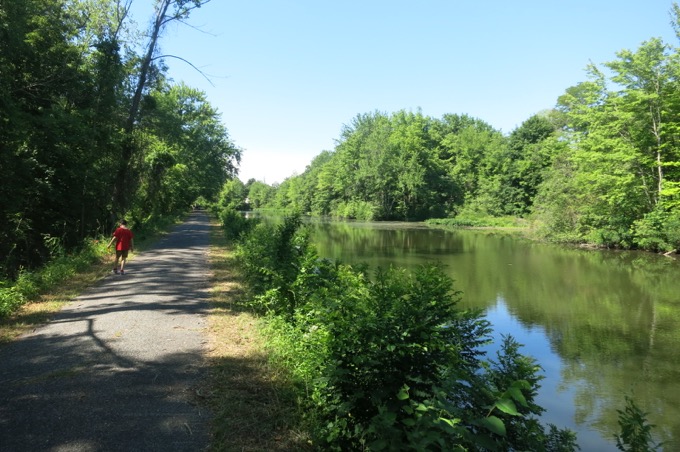 Boom! Millerites! Right there on King’s Island! And it’s accessible and open to the public! I smiled in smug satisfaction, knowing my children would perk up and begin asking all sorts of fun and interesting questions about apocalyptic cults!

We took our picture, and I didn’t even bother to ask them to smile. We turned tail and trudged back to the car. They sulked. Bicyclists nearly ran them over multiple times. None of us even cared. 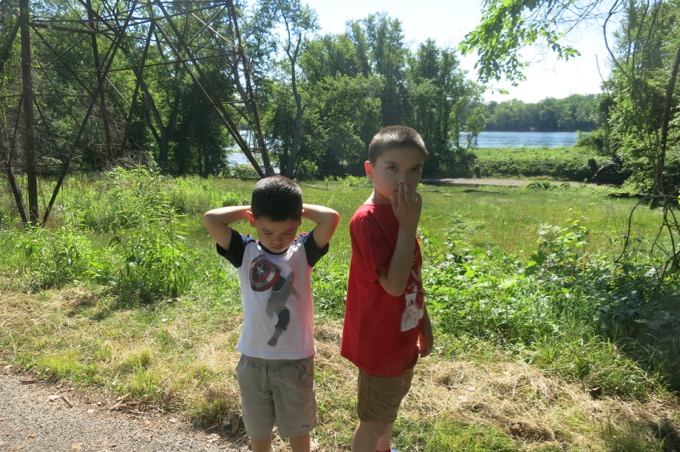 The sun bore down on us with unrelenting hatred. The luckless fishermen now smelled like corpses. The woodpecker was gone. The asphalt seemed to be melting under our feet.

In order, the 15 biggest challenges of this Challenge point were:

Then, as we neared the final gate, the abandoned factory, and the trash piles again, it happened. The highlight. Beauty in death. 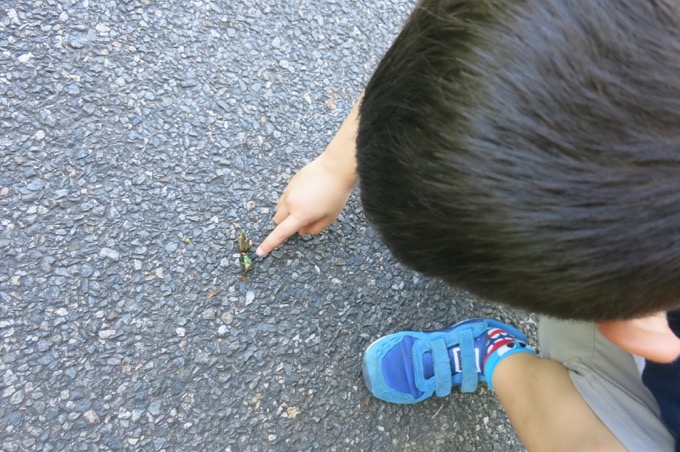 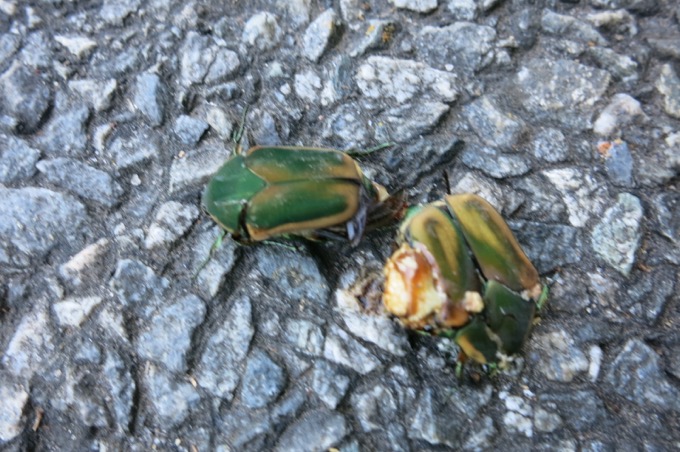 He was so happy. I was happy. Damian did his spins and yelps, knowing the car was within sight. 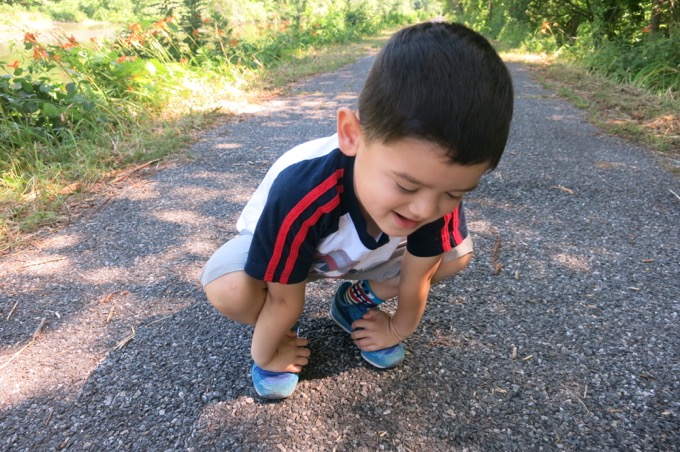