2019 Update: This page is so bittersweet for me. I LOVE this page so much and swell with pride reading it and looking at the pictures. But now, as Damian enters his teen years, these things just don’t, won’t, and can’t happen anymore. And that makes me very sad.

This is it, folks. THIS, right here, this is why I do what I do, why I hike what I hike, and why I write what I write. I’m far from a “hero,” or a role model – or even an exemplary dad. I’m just a dad who happens to have a special needs kid. 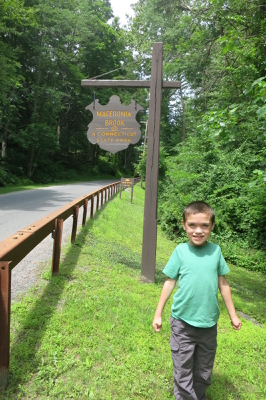 A kid who, because of a missing chunk of genetic material on the short arm of his 17th chromosome, has great difficulty with… with life. Completing this hiking challenge with him was rife with some unique challenges. Damian simply cannot deal too well with being pushed to do something that requires effort.

His opposition to such things manifests in different ways, but they always include such fun things as self injury and piercing screams. Damian’s SMS is not fun, but he absolutely can be a fun kid. And a funny kid. He truly does fulfill what it means to be “special” in this day and age, that’s for sure.

And this hike was the last stop on a long CTMQ day: A previous hike at Lover’s Leap State Park, a stop for lunch at a Roadfood “Eat Before it’s Too Late joint, and a visit with Barry at Kent Falls Brewery all preceded Macedonia Brook. I was more than a little concerned with how we’d get through it.

Macedonia Brook is in western Kent, and its 2,300 acres bumps up against the New York border. The views you see in the pictures here are pretty much of New York. The hills here tend to be more mountains than hills. And it is a beautiful, unspoiled park. Go there.

But what makes a hike with expansive views of mountain ranges great for me, makes it all the more difficult for Damian. He’s become pretty proficient at easy and moderate hikes. This is a kid who didn’t walk with on his own until he was nearly two-and-a-half. He has issues with spacial relations and whenever a footfall is unsteady, he sort of freezes and refuses to continue. 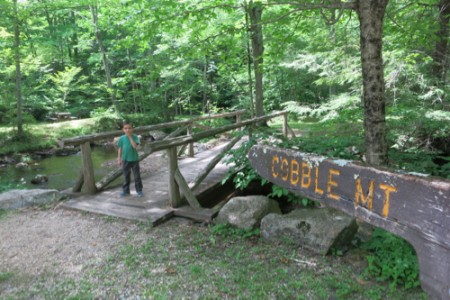 And off we go!

Though those issues have largely abated, any sort of steep ups and downs still create serious problems – both physically and mentally. I hadn’t really done much homework on what this TSTL challenge point would bring… but to be honest, I’m kind of glad I hadn’t. Otherwise, I may have skipped it with Damian altogether.

This is, by far, the most difficult of the 14 2015 points. At least using the trails we hiked anyway. (We took the much more direct white trail up to the viewpoint. I’ve since heard that the longer blue trail is far more gradual… but longer.) I wouldn’t be surprised if the old Appalachian Trail followed the ridge line here, before being rerouted to the other side of the Housatonic River.

Surprisingly, Damian was fairly game for the hike from the outset. The first half mile or so was flat and took us through a frog factory. They were everywhere, which was pretty cool except squishing them became a real possibility.

Once we left the orange trail to take the white up the mountain, things got interesting. For about a quarter mile, the trail ascended steadily, but it was manageable. For the last third of a mile, though, the trail became downright difficult.

It was steep. Very steep. Not quite hand-over-hand steep, but about as steep as trails get in Connecticut. Something happened to Damian here. Something wonderful.

Something clicked. He became determined. He didn’t even want to rest; he just wanted to keep going to the top. I offered breaks and he’d counter, “No! Just go!” He was working hard and being careful about his route choice.

At some point, I had to hold his hand to get him up the incline. I didn’t really let go until the summit… probably a good quarter mile of hand-holding. He didn’t fight me with it (very unusual.) When I’d let go to wipe the sweat or whatever, he’d silently reach out his hand again, accepting of my help.

This surely sounds like nothing to you, and I get that. But for me? It was incredible. It was amazing. Damian never does this. Normally, he’d scream at me for trying to help him. He’d fight me on it and probably hit himself in the forehead for good measure. 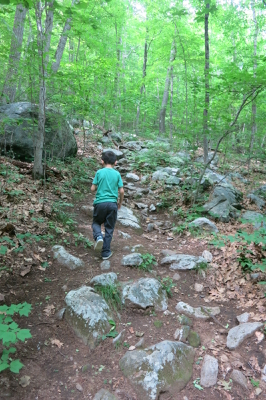 There was none of that on this climb. This was a father and his son, making a difficult climb together, working as a team.

We caught up to and passed a family on the trail. I wanted to stop and chat with them. I wanted to brag to them. Hell, I wanted to shout with a megaphone about what my son was doing. I wanted to tell them that this kid, making his way up the trail, has significant special needs and as of a few months ago, would not have done what we were doing.

I was so proud I can’t even tell you. I was beaming. Damian was doing it!

We arrived at the summit and took in the views. For once, Damian seemed to actually care about his achievement and posed for a picture. We sat and rehydrated for a few minutes. He was…. happy! I was overjoyed.

I told myself during the hike that, when I write about this, there’s just no way I’ll be able to capture how I was feeling at that moment… and I was right. I can’t. In short, this was easily one of my best moments as a father. Really and truly. I was so proud of my son; a child who can frustrate me in ways 99.999% of the world can never understand.

There is a little truism in the world of special needs parenting. It goes something like, “While the difficulties and lows of dealing with what we deal with cannot be understood by those who don’t experience them, the same goes for the highs and successes. The highs are inexplicably higher than anyone else could ever know, including parents of typical kids, and that makes everything okay.”

It’s totally true. I wouldn’t have believed it back in the day, but it’s true. When Damian said his first word (“mama”) at age 5, I can assure you it was so much more exciting than when his typical brother said his first word at the “proper” age. And this day? I literally cried in the car while cooling down and texting my wife about it. It was only a couple miles at most. And I cried.

We still had to get back down safely which wasn’t always the easiest thing to do. I held his hand again for the first 20 minutes and had to lift him up and set him down through a bunch of the steeper parts.

We saw that family we passed again, off in the woods scrambling straight up for some reason. I was going to offer assistance, but the “leader” was a bit of a jerk, yelling at his mother and explaining that “Of COURSE we’re ON THE TRAIL!”

Oh, really? The same trail you are watching a guy and his child walk down 30 feet away? The one you’re clearly not on? Idiot.

We made it back to the car in one piece and even though he was exhausted, Damian even posed for the high-five picture below with me. (Another amazing feat.)

We got back to the center of Kent quickly and Damian enjoyed some much deserved ice cream. Again, I wanted to tell everyone around me what we just did… but didn’t.

And that’s why I write. And hike.

I loved this day so, so much. 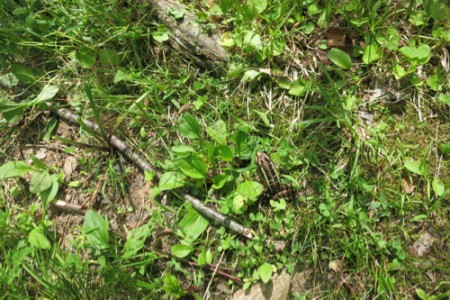 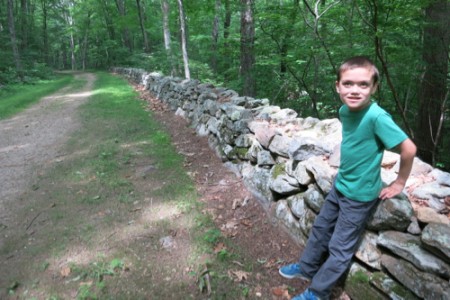 I even got him to pose nicely! 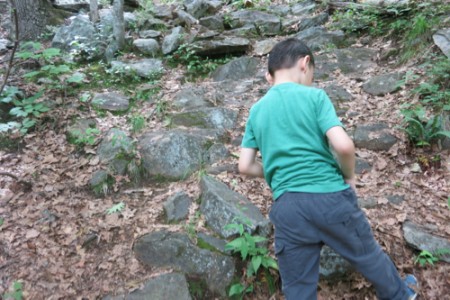 Yeah, it was steep! 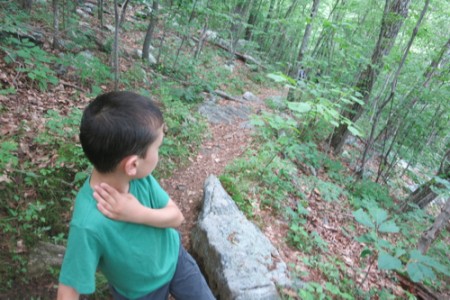 Looking back at the family we passed. 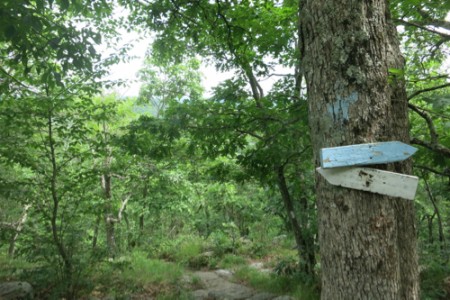 Reaching the blue trail at the ridgeline was wonderful. 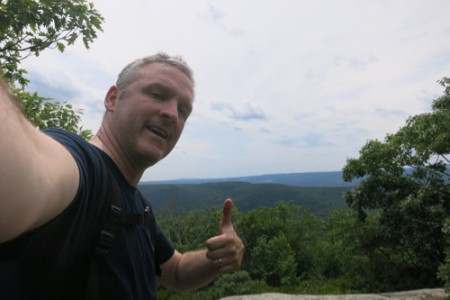 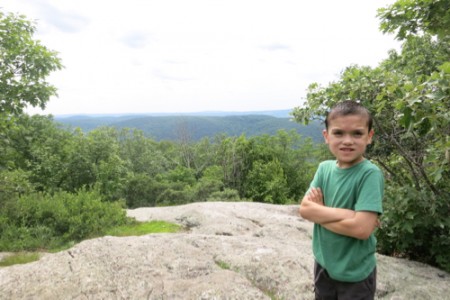 One of my favorite, most rewarding pictures ever! 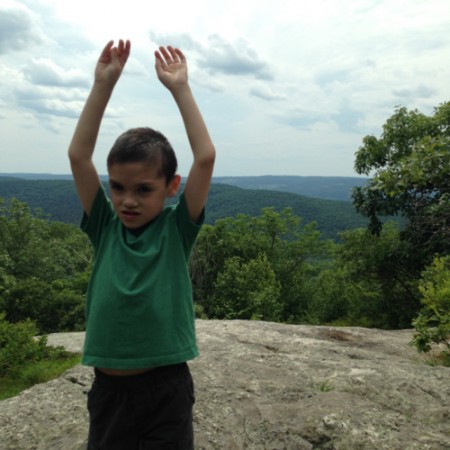 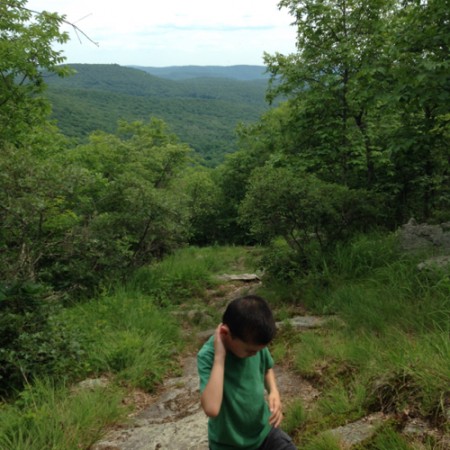 Okay, all done posing and celebrating. 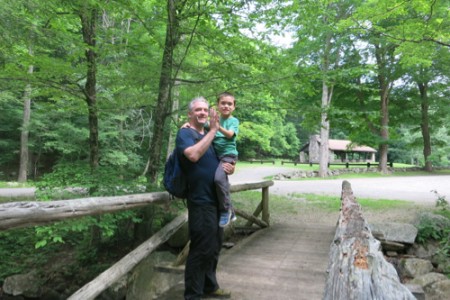 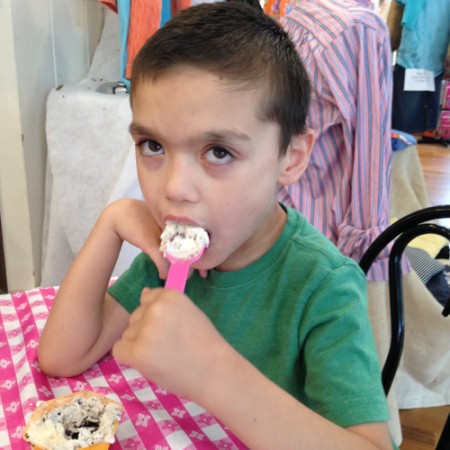 Much deserved treat at Annie Bananie’s in Kent… 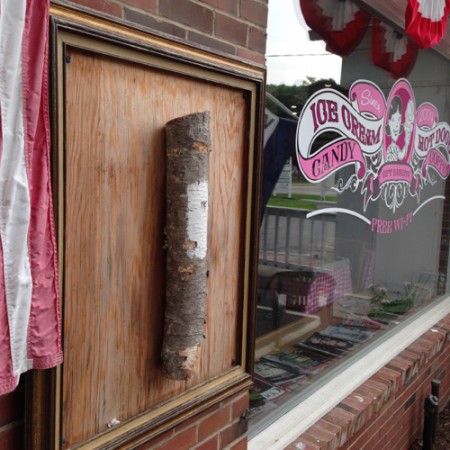 … Which also houses an outfitter and AT hiker ride board. And this, an AT blaze outside. Yeah, I love this place.