These falls are included in the new (2013) Connecticut Waterfalls guidebook, so I’m adding this page several years after visiting. And since I’m lazy, I’m not going to go find the CD that contains the original pictures to give you the lovely giant waterfall picture you so richly deserve. Sorry. 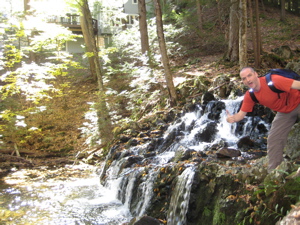 The guidebook is a little confusing with these falls, but that could be because they are essentially unnamed. But then a commenter on my site named one of the falls “Northgate” which matches the name in the guidebook, but it seems to me they are talking about a different falls.

Not that it matters a whit, because they are both near each other and along the same trail. A trail which, by the way, you really should make the effort to hike. I’ve long championed this part of the state – west Granby and Simsbury Land Trust and McLean Game Refuge trails. True “hidden gems” that I want to keep to myself, but also want to share.

I live a complex life.

When you’re done reading this page, go read my linked McLean page to get a better sense of the trails around this area. You can park at either end of the pink-blazed, 2.88 mile long Westledge trail, but if you park near the driveway on Firetown Road, you can get to them in short order. 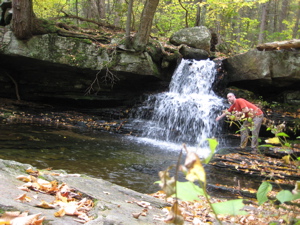 And they are worth getting too. The first set of falls is right at the beginning of the trail off of the private driveway you must walk up and then the second set are a little farther up the trail, past the Eddy Bench and Eddy Trail junction. You can’t really miss either.

I don’t know which are Northgate and which are unnamed and I don’ t know the name of the brook which created them.

I only know that they are very nice and the trails to them lead to some really cool stuff at the Game Refuge. So go check them out yourself.