I’m pretty bummed out that White’s Diner doesn’t have a website. In fact, I just spent an eternity trying find something about this joint’s history. After those three minutes, I found this: White’s is a Bridgeport institution, in existence since 1935. 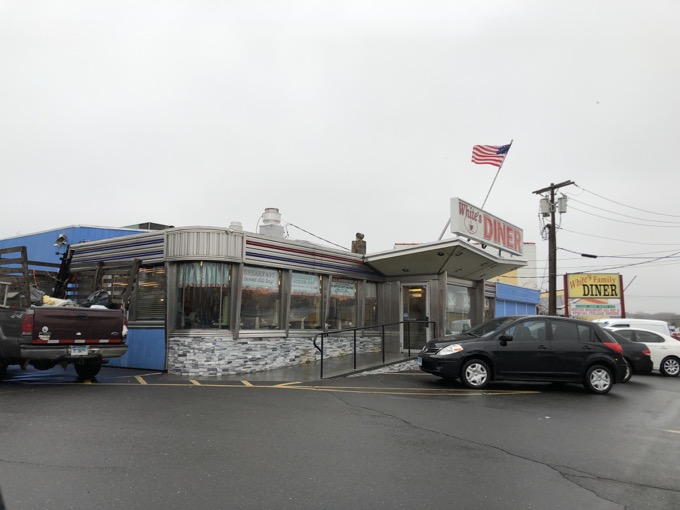 I want to guess there have been five or six different owners since that time. I want to say that the building has not changed at all. I want to believe that the traditional breakfast menu has remained largely unchanged. I want to say all this with certainty, but I can’t.

White’s exists outside of the Internet. Because it can? I guess? It is most certainly a “classic” diner in the most classic of senses. Small, rectangular, shiny… with stools and countertops and an impossibly tiny bathroom. It survives on busy Boston Post Road in Connecticut’s most populous city, surrounded by fast food spots and dozens of other restaurants. 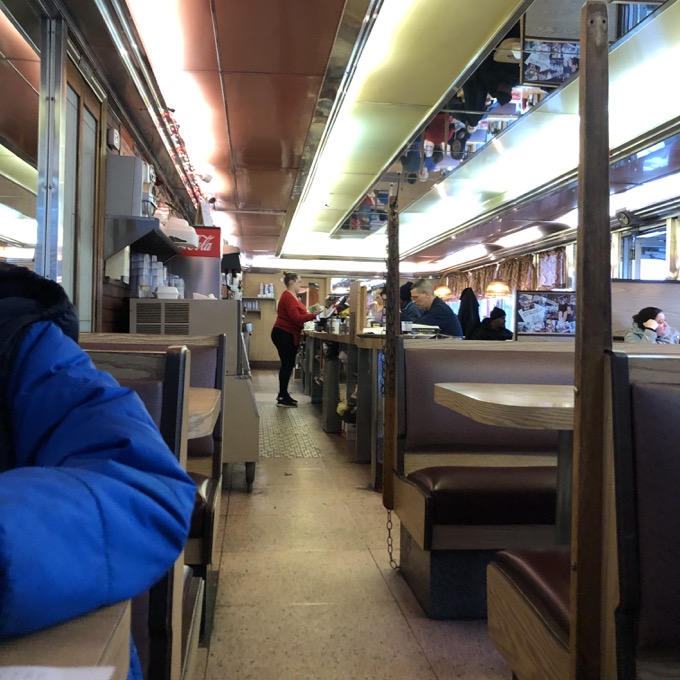 White’s is a shiny metallic beacon amidst a storm of Bridgeport urban sameness. Boston Post Road here is ugly. All hail White’s Diner.

Here’s something else: Al Pacino filmed a scene of the movie “Righteous Kill” here. I have not seen “Righteous Kill,” so I can’t speak to the scene in question, but I believe it was very, very short and quick. 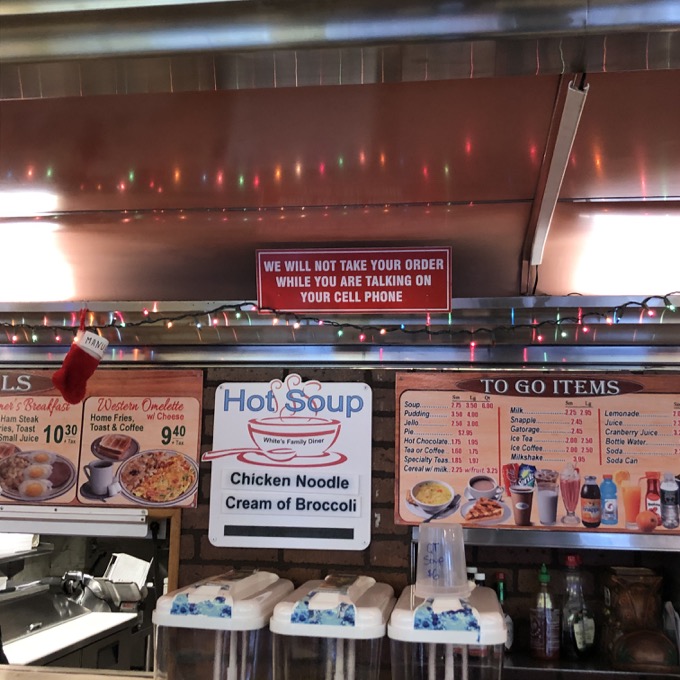 I just noticed that their “to go” menu includes Jello and Pudding, which are weird to-go items.

Calvin and I visited on a dreary winter day. We slid into a back corner booth and a very pleasant server greeted us with a smile. Calvin would have his 2019-2020 diner season usual: Chocolate chip pancakes. I had some sort of omelet with veggies and cheese. My 1998-20xx diner adult lifetime usual.

While waiting, Calvin and I played hangman. Like, pencil and paper hangman. Old school. Keeping it real in a 1935 diner. When Calvin didn’t get my word in time, I continued and drew crude genitalia on his hanging man, much to his delight/embarrassment. I mention this because when the server swung by with our food, my son was very quick to hide the offensive stick figure drawing out of fear that the woman would think poorly of us. 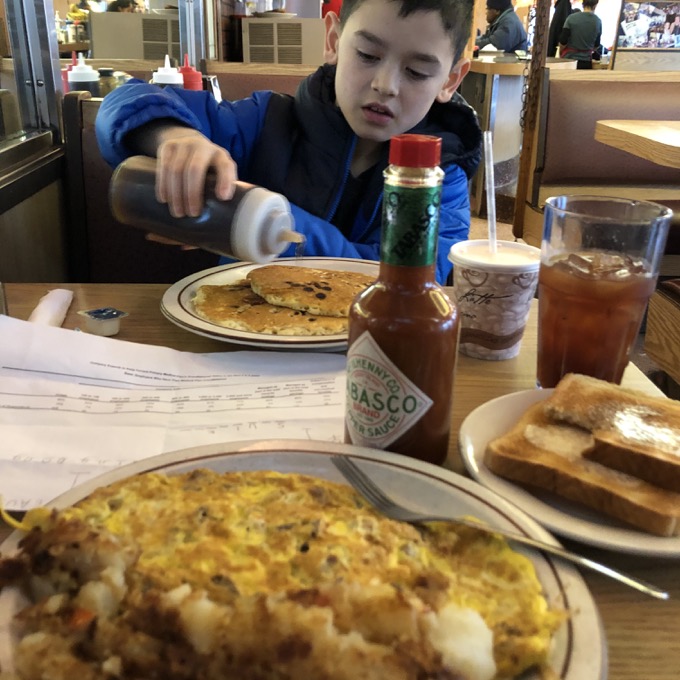 That child can be so cute sometimes. Clearly he doesn’t know Bridgeport and the fact that the woman has very surely “seen some stuff.”

The pancakes were quite large. No way could an eight-year-old take them down. I dug in on my standard issue omelet of choice and was very pleased there was hot sauce at the table already. Big bonus point for White’s. 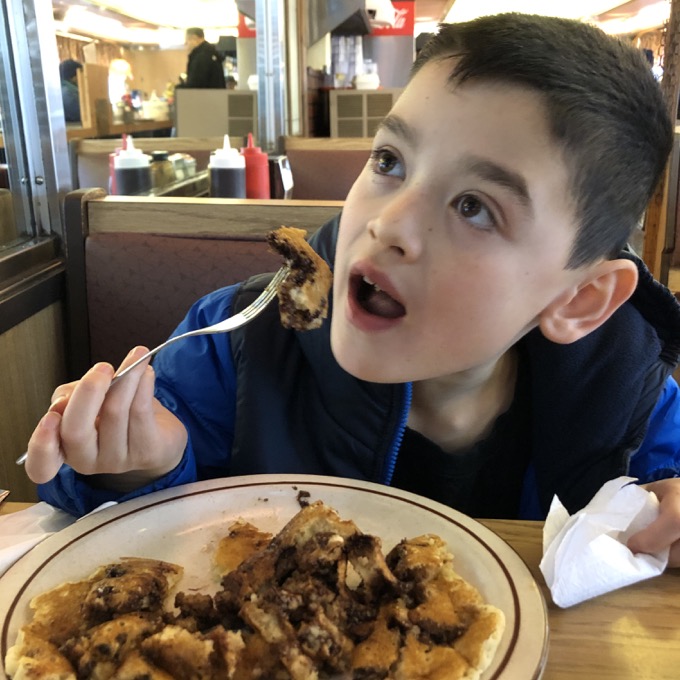 Calvin began stuffing his gullet with – can I just interject and say that chocolate chip pancakes are gross? Just way, way too much sugar. Anyway, he ate his meal. And I ate mine. And both were good.

See what happens, White’s Diner, when I’ve got nothing to go on? I just ramble. Our meals were “diner-excellent” and the prices here are more affordable than some other similar diners around the state. Let’s check in on Calvin: 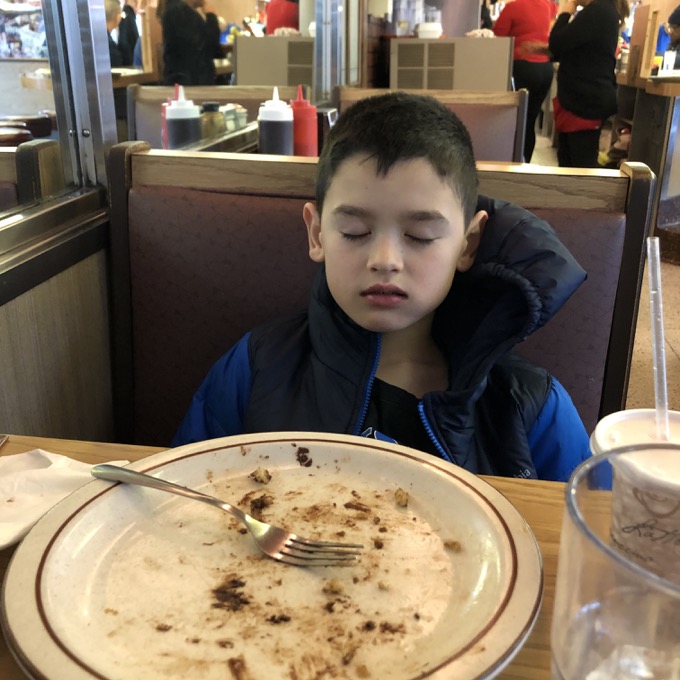 Oh boy. Perhaps he shouldn’t have eaten all of that. Food coma. Calvin? CALVIN?! 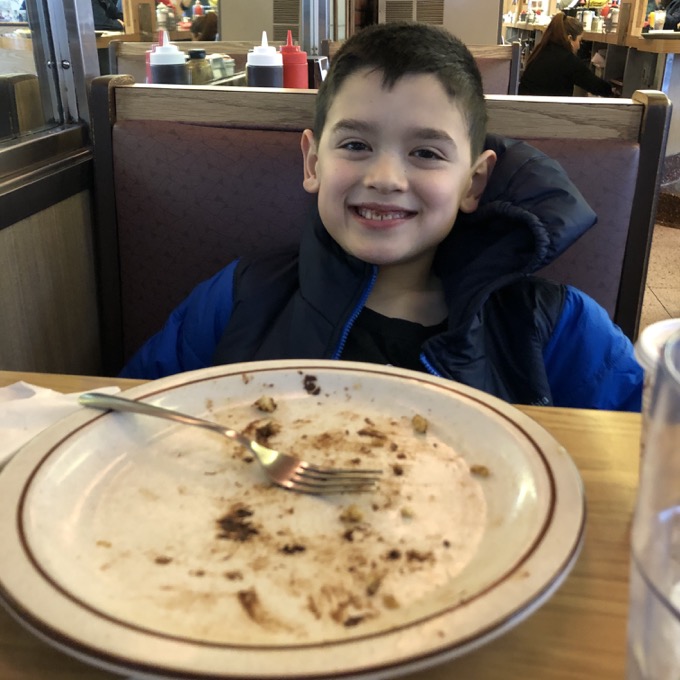 *An hour or so later, while approaching our house, he did ask if we could stop to get donuts. Please note it was mid-afternoon at this point. He is ridiculous and I told him as much.

I love places like White’s and I hope it outlasts all the fast food junk that surrounds it. 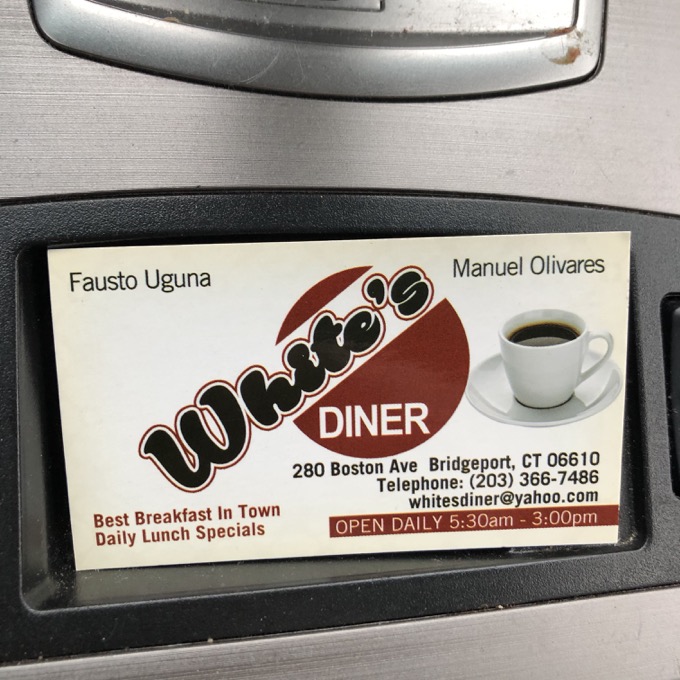