There are a few little hip enclaves around Connecticut that may fly under your radar. Granted, “hip enclaves” in Connecticut are a bit different than hip enclaves in, say, New York City or Copenhagen or even Northampton, MA. But whatever, we take what we can get. 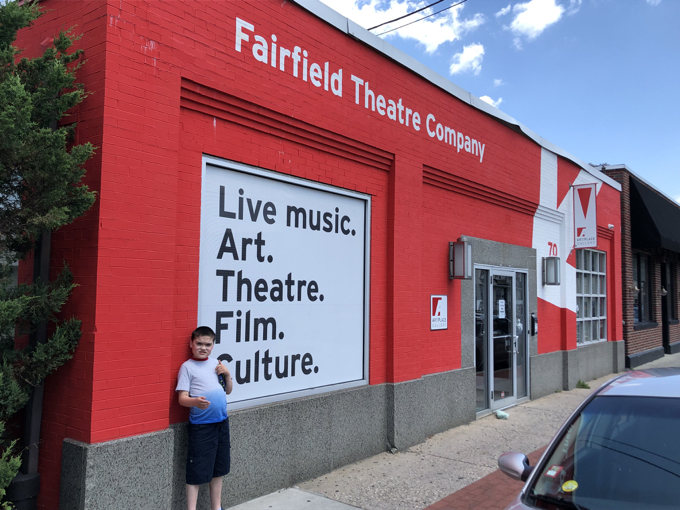 The Black Rock section of Bridgeport is an up-and-coming hip place, which sort of bleeds over into Fairfield. That’s right, there’s a part of Bridgeport that has a Fairfieldian feel to it. In fact, despite what many think, traveling from Black Rock to Fairfield is seamless and many people don’t know they’ve crossed that Maginot Line.

The Art/Place Gallery is across that line, near the Fairfield Train station, where commuters do actually take the train. The gallery is located in the same complex as the Fairfield Theatre Company which does spell “theater” the hip way, so now you know this place is hip. I bet they call this area the Arts District or something. 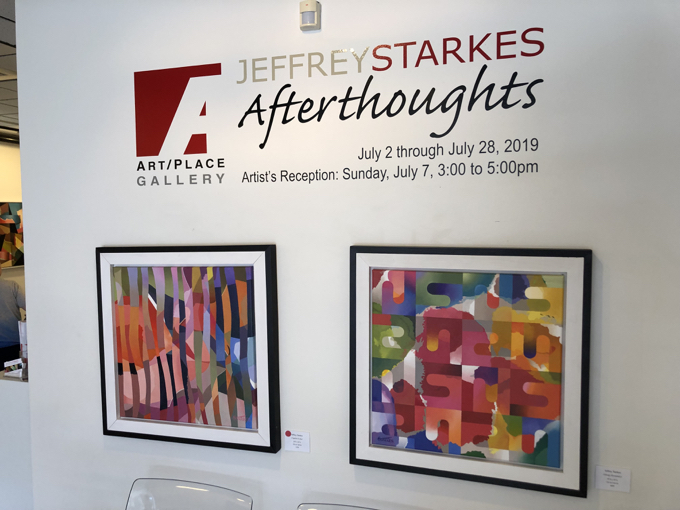 Art/Place Gallery celebrates over 35 years as a not-for-profit artist run gallery, located in the center of downtown Fairfield, Connecticut. Founded in 1981, Art/Place opened its doors in the Southport Railroad Station, which in 2008 was destroyed by fire, eventually leading to our current home at 70 Sanford St, located in Fairfield’s Arts District.

Nailed it. Damian and I arrived after a few other nearby stops, ready to check out some art. I wonder what the mission of this place is. 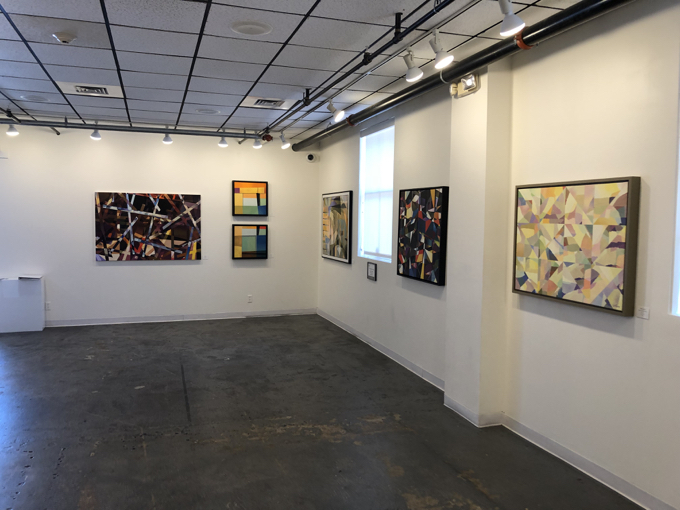 The mission of Art/Place is to provide a place where professional and emerging artists can interact creatively and exhibit without the restrictions that might be imposed by a commercial gallery. Members can experiment and develop work in a broad range of mediums and subject matter. Additionally, our mission includes interaction with the community by way of rotating solo or group exhibits, art talks, lectures, demonstrations, workshops and critiques.

A frequent tradition has featured “guest” artists which have included Sol Lewitt, Gabor Peterdi, Antonio Frasconi and James Grashow to name a few. The “Artists Invite Artists” show has also been a popular exhibit. Art/Place continues to present their work in other venues to ever expand our audience.

Cool. Not sure I understand that last bit, but at least I’ve heard of Sol Lewitt… which you’re now thinking, “well gee, Steve, I hope so. He’s sort of omnipresent in Connecticut.” Fair point. But what about Jeffrey Starkes? 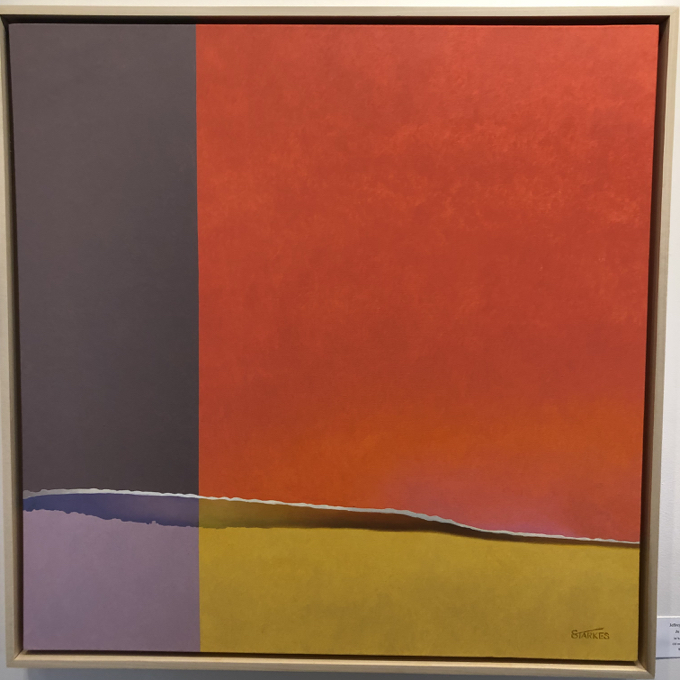 No? Well, all the paintings on this page are Jeffrey Starkes paintings. I like them a lot. I’m attracted to dynamic arrangements of torn shapes, hard edges, and the illusion of a layered spatial depth achieved through use of transparency. I mean, that’s obvious, right?

Jeffrey Starkes has a BFA degree from Paier College of Art and he lives and works in West Haven, Connecticut. After a long career as an art director and graphic designer, he is now an emerging abstract artist working primarily in oils. His paintings have been displayed at galleries and exhibitions throughout this state. His style is characterized by dynamic arrangements of torn shapes, hard edges, and the illusion of a layered spatial depth achieved through his use of transparency. 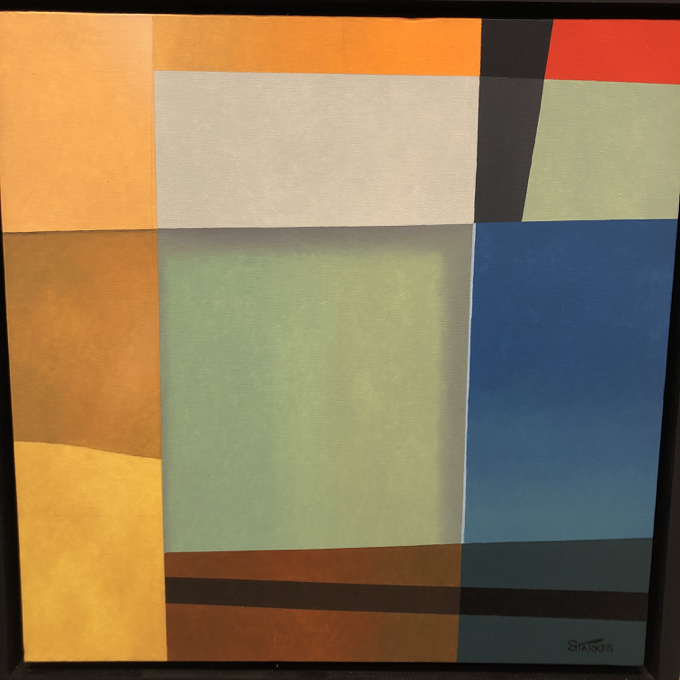 Nice. Starkes’ exhibit was called “Afterthoughts” because all of the works on display were returns to previous ideas. He went through old sketches and teased out some previous dead-ends to formulate the completed works in the show. I can’t pretend to know how abstract artists think, so I’ll turn to Starkes for his explanation:

Abstract painters are often confronted with the problem of too many possibilities. To avoid becoming paralyzed by unlimited choices and options, we develop a set of personal rules and strict guidelines…This self-imposed discipline keeps our work consistent and focused. Unfortunately, it also means that many good visual ideas and concepts are rejected for further exploration because they don’t fit within the rules. 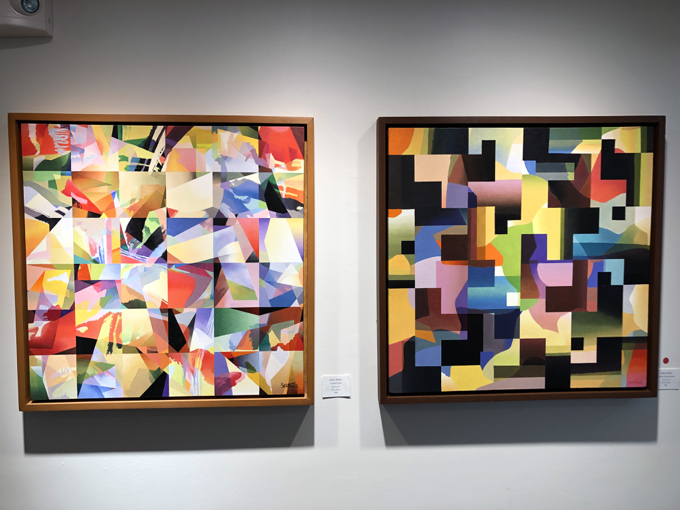 I hear that. This is a good explanation as to why I don’t write fiction. Given no boundaries, no set subject matter, and no rules where a story can go, I’m overwhelmed and draw blanks. (Actually, I’ve never really tried to write fiction, but I know enough to know that I can’t and won’t. Real life is bonkers enough to satisfy my creative bent.)

Starkes’ paintings were fairly priced too – enough that I contemplated purchasing one. My wife and I began filling our house with Connecticut artists’ works over the past several years, and I know she’d enjoy having one of these on our wall. Alas, I didn’t pull the trigger, but I’ll keep Starkes on my radar. 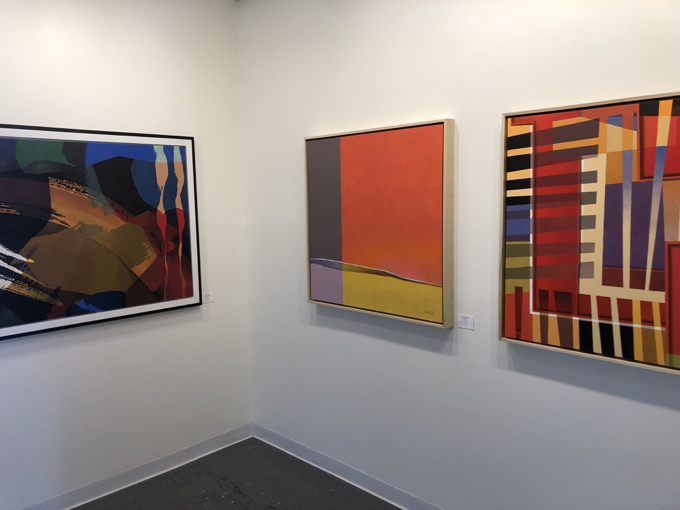 Damian and I poked around and found the entrance to the theater. It looks like a theater. We used the restroom and both of us found it funny that they felt the need to highlight the free wifi above the urinals. 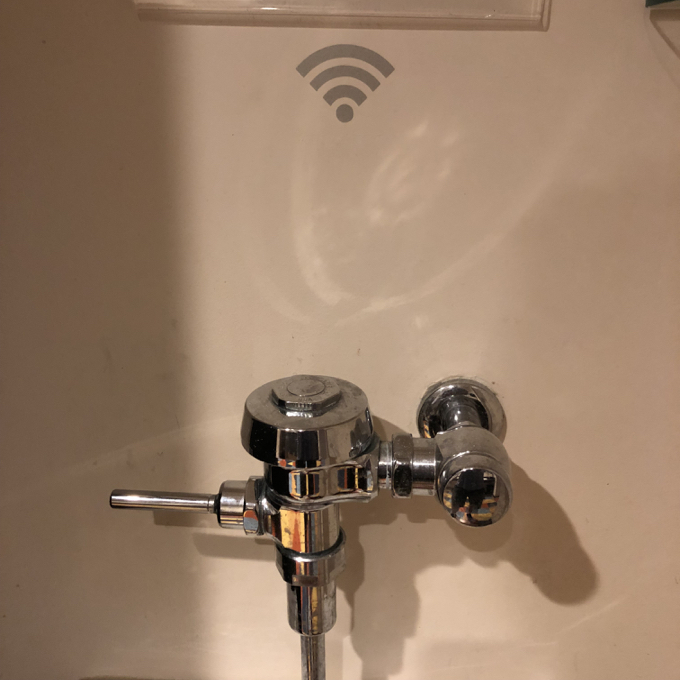 We took one more lap around the gallery, looked at the kid manning the box office who paid us no mind, and then exited out to our car. On the way there, Damian found a car that he really liked and asked me to take a picture of him with it.

(This is true – I already said I can’t write fiction – Damian loves music and knows more bands than you do. Especially 80’s punk bands that I subject him to. So there.) 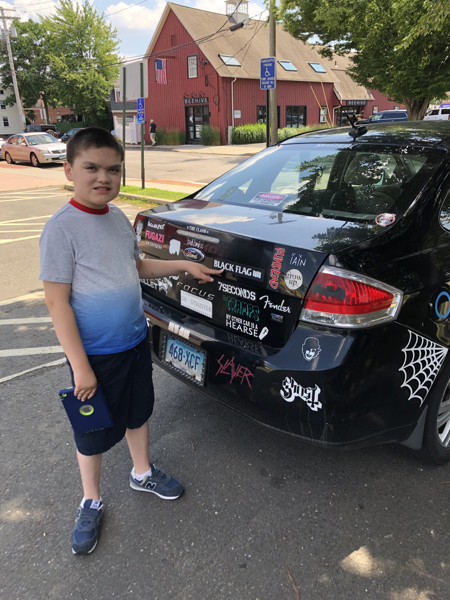