I have this weird habit of reading lots of books about stuff in Connecticut. Sure, this makes sense on the surface. Heck, when I started out with this website, these types of guides and books were invaluable to me.

Now I read them firstly to see if they contain anything I’ve missed/don’t know about, but secondly just to see how others describe many of the same things I’ve described. Is that weird? I don’t think so. 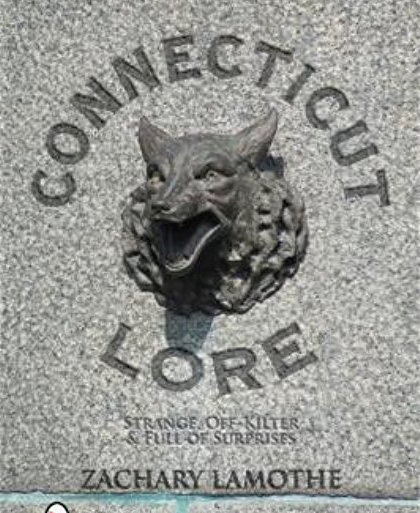 CTMQ covers everything in Connecticut except… ghost stories. I will never address ghost stories except in the context of a museum visit and to make fun of people who believe in ghosts. I can’t say if Mr. Lamothe believes in ghosts, but he sure does love ghost stories.

After all, this book is called Connecticut Lore. Lore is usually defined as “the body of knowledge, especially of a traditional, anecdotal, or popular nature, on a particular subject.” As such, the title is fine and therefore the content is fine as well – “Lore” is a proper title.

Connecticut Lore focuses a lot on ghost stories; I’ve read about them all before and – and this is not meant to offend the author – they all bore me. The Moodus Noises are actually interesting though, because they are caused by a very real geologic phenomenon. But almost everything else?

Colonialists blamed Satan and dark forces for all things bad.

Lamothe writes with a very accessible style, and is cheeky enough to make me wonder how much of this stuff he believes. (Although, I’ve listened to two podcasts with him and both focused on the ghosties and he didn’t exactly come down on the side of rational thought.) 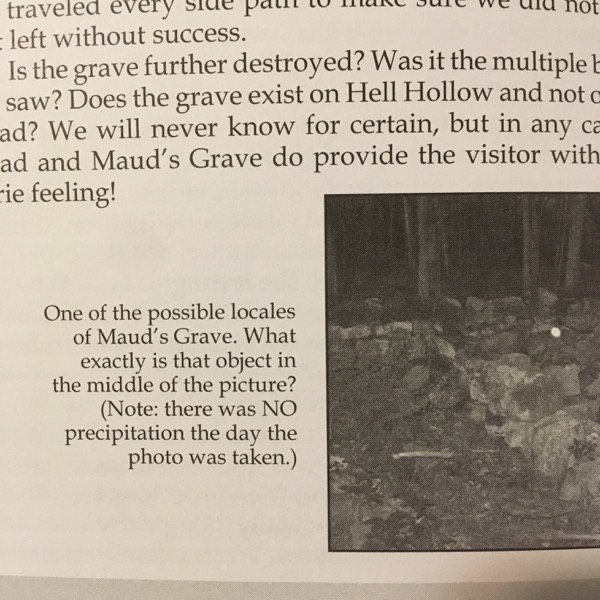 If you take a flash picture in the woods, you are almost guaranteed that something will reflect back as a bright “orb.” This is not a ghost.

And there was this one, that really got my goat: 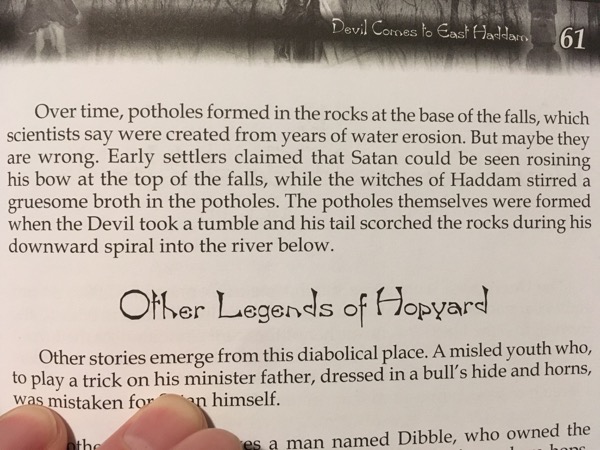 Now again, one could read this passage as not so serious. I guess. Because really, who is more likely to be wrong? Scientists in 2018 or illiterate farmers in 1675?

BUT – there are plenty of passages in Connecticut Lore about real stuff and real places. Fun places and cool places! It’s almost like someone spent some time on a certain website that lists everything cool and fun and weird in Connecticut and found the two doll museums to write about. And a page about the Pinchot Sycamore with a lame Bronson Pinchot Joke.

Or maybe not. Lamothe writes in his own voice with his own words and appears to have actually visited pretty much everything in the book – a rarity in this business and I tip my hat to him. However, of course many sources were consulted to help him along.

And that’s fine! And necessary! I would (and do) the same exact thing! That’s how you write a book – or a website like the one you’re reading! But, you know, if I were to write a book and I leaned a bit on certain sources I’d acknowledge them in the book’s acknowledgements. (There is a nice acknowledgement section and I’m sure there’s some formula where at some point you simply can’t list everything… and I’m sure CTMQ fell below that threshold.)

Oh, whatever. It’s a decent enough book and anyone who devotes the time and energy necessary to write one deserves credit.

Lamothe was back at it, hot on the heels of the success of Connecticut Lore. The second book promises to provide 82 more strange local locations. Cool.

I wrote the first review months ago and now that I’m re-reading it, I got a bit uncomfortable. And I was going to soften it a bit. But then I was going through old email and came across this:

I just wanted to comment how comprehensive and wonderful your website
is. As an author who is currently penning a book on offbeat CT, hats
off to you and your site! As I have also searched and researched the
state high and low, you truly have found some extraordinary places.
And I thought I was the only one that would gladly spend their free
time in Willimantic….

As I wrote above, anyone Googling certain things is bound to come across CTMQ. I’m not bragging, that’s just a fact. So this email wasn’t surprising to find.

More is more of the same… as one would expect. A large section of the book is “Ghosts and Other-Worldly Entities” which is just the way it is. (One little entry was a bit grating – Lamothe spoke to a “psychic medium” to get a tour of historic Norwichtown in Norwich – where Lamothe grew up. I guess it gave a “fun” flavor to the place, but for my money, I’d prefer to learn from a historian.) 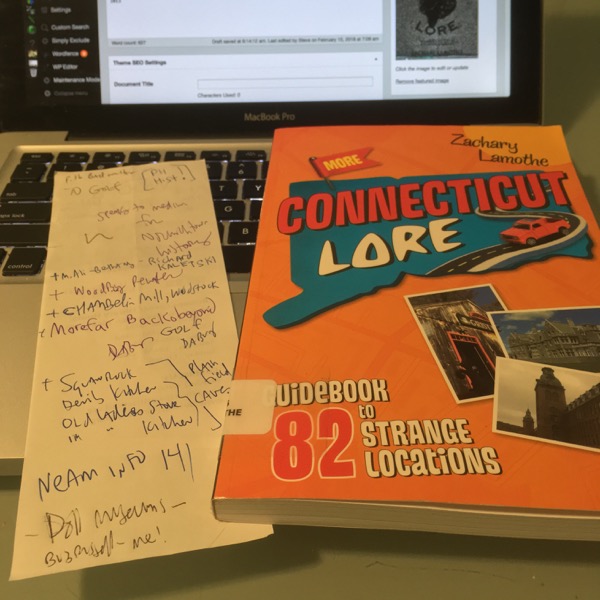 A glimpse into my note-taking mess.

Once again, the author seems to actually GO to the places about which he writes. I mention this again because this is incredibly rare in the world of local travel tomes. I know that sounds weird, but I swear it’s true. When you’ve been to a place, there are tells to know when a writer has not.

I learned of some new stuff around the state from the book – which makes it a very worthwhile book in my eyes. The secretive MoreFar Back O’Beyond Golf course in Danbury (and New York) is the sort of thing I love.

And Lamothe has convinced me that a visit to Woodbury Pewter would be something CTMQ-worthy. And speaking of Woodbury, there is an entry about Buz Russell’s Farm and Rural Life Museum. This tiny museum is described in only one place I know of… and it’s funny, because the author never writes that he actually went there, and…

Oh who cares. Zack, my man, thank you for getting the word out about some lesser-known places in Connecticut. I didn’t find any glaring errors in your books which is a feat unto itself. I realize the ghost stuff sells. Your acknowledgements and cited sources are extensive, and I honestly don’t feel slighted.