Okay, not Flying But…
Diving Horses in Niantic
100 years ago 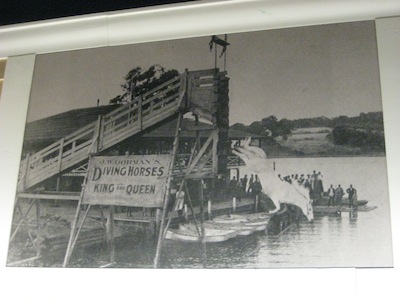 I was poking around the Niantic section of East Lyme one fine day and stopped to check out a sign which noted the highlights of the Niantic River Estuary Canoe/Kayak Trail. I can’t wait to do this “trail” someday, especially as they highlighted a bunch of “historic points of interest” along the way.

Where today’s Route 1 bridges over the estuary’s northern tip, there used to be a Golden Spur Amusement Park (1905-1924). And that park apparently featured none other than J.W. Gorman’s diving horses!

Wow. That sounds nuts. The sign also helpfully noted that I could see pictures of this nonsense over at Tri-Town Foods on Route 161. Since I was headed that way for some clam chowder (it’s on a list, here), I decided to go find these pictures.

Boom. They’re there. I even took a picture.

Apparently, this was a thing 100 years ago. In my 21st century ignorance, I had no previous knowledge of such a thing. Here’s a crazy bit about these diving horses from something called The Street Railway Journal, Volume 27 that I found through Google Books.

The high intelligence of horses and their willingness to obey man has made them rather common as trick performers but it is certainly unusual to find a pair of these animals indulging in high diving performances on their own volition. Some years ago JW Gorman the Boston amusement purveyor learned of the existence of a pair of young horses which possessed this remarkable trait. Recognizing the high exhibition value of such an act he finally succeeded in purchasing them for park performances. The animals which are brother and sister are named respectively King and Queen. They are pure white in color and are said to be of Arabian descent. It appears that they were never taught to dive but that 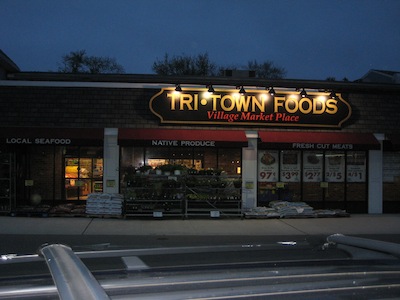 trait is hereditary with them. Since coming into Mr. Gorman’s possession they have proved to be among the most attractive features at hundreds of parks and fairs in America and Europe. When ready to perform both animals are brought to the foot of a long incline leading to a platform in mid air. King very courteously permits Queen to precede him for the diving act. Upon reaching the platform the mare places her forefeet on a little shelf below the platform and lowering her head springs outward and downward diving 40 ft through the air into a shallow lake. As soon as the mare has left the water her partner repeats the act. Although neither of these animals has been educated in the usual sense of word they show a high degree of intelligence and their evident pleasure in diving is not the least interesting part their remarkable performance.

Here are more and better pictures of this insanity

Back to Animals (Aquaria, Farms, Wildlife and Zoos)
Back to Curiosities