While Connecticut has its share of excellent restaurants, it’s the unique food items made here I feel more compelled to write about here, in the food section of my blog. And by unique I mean, “different but delicious,” not some wacked out gross thing that some guy makes but no one likes. (Not that I’m aware of that type of thing here in Connecticut.) 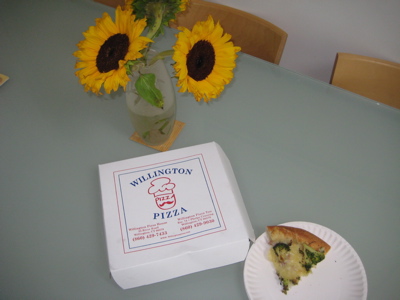 I didn’t think to document this event until there was only one piece left.

Way back in the 1990’s, some college or college-age students used to do a thing called “dating.” This was before online social sites like Facebook and MySpace made such a quaint practice obsolete among that demographic. And if you went to UConn, as I did, your options for a “real” date were limited to pretty much two places: Bidwell Tavern or Willington Pizza.

Both required a short drive and both felt like you were away from the 16,000 other yahoos on campus. Yours truly actually did go on a date to Willington Pizza one time though my memory is fuzzy. Hoang, on the other hand, was too busy studying for such nonsense and had never been.

Which brings us to the present. Every so often over the course of the nine years I’ve known Hoang, the question of whether we’d ever had the red potato pizza from Willington has come up. I always said yes and Hoang shamefully had to admit she hadn’t.

And so, on a random Sunday drive out Route 44 to Pomfret and environs (winery, Audubon Society Museum, Renee Zellwegger’s house), having seen the sign for Willington whiz by, Hoang suggested we find the pizza place and she could finally join the ranks of the potato pie initiated. 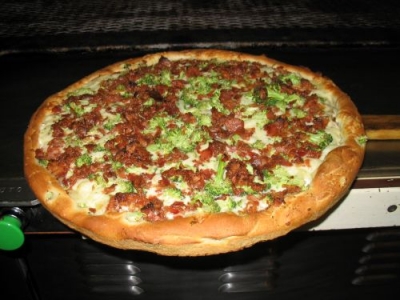 The pie with bacon.

I couldn’t remember where the restaurant was, exactly, but I did drive straight to it as if I’d been there yesterday. (My powers of geographical memory are unparalleled.) Damian was getting tired at this point, so I ran in and asked how long it would take to make a small pie to go. Only “8 to 10 minutes!” Sold!

At this point, if you’ve never had it, you’re saying, “Gross!” or, “Are you kidding me? That’s not pizza!” Here’s the thing – I am a thin crust devotee and pretty much just like some basil and anchovies. Heck, I’m not even a huge potato fan. But this pizza is phenomenal; a national award-winning pizza, first place for the most exotic pizza of the year. They’ve won a million awards.

Simply, it has a plain crust with sour cream, sliced red potatoes, sharp cheddar cheese, chives and your choice of bacon, broccoli or both. Since we don’t eat bacon, we lost out on that flavor component but no matter. It looks like a regular pizza but obviously it’s not.

It’s not greasy or sloppy and holds together far better than you’d think. It tastes like it sounds like it would… but better somehow. Take CBS’s Harry Smith, who upon reading the exotic pizza winners, blanched at the broccoli, made faces at the red potatoes and basically said “yuck” about the pizzas.

So the owner wrote Smith a letter and before he knew it, he was on CBS This Morning serving Harry the potato pie. Yes, he loved it. Hoang loved it. Damian chowed down two pieces. And best of all, Hoang can now tell her brother she’s finally had the dang red potato pizza from Willington.