Since the Canton Land Conservation Trust lumps these two trail networks together, so shall I. They are only a short drive away from each other (and a host to Simsbury Land Trust trails as well) and both traverse rather similar terrain. 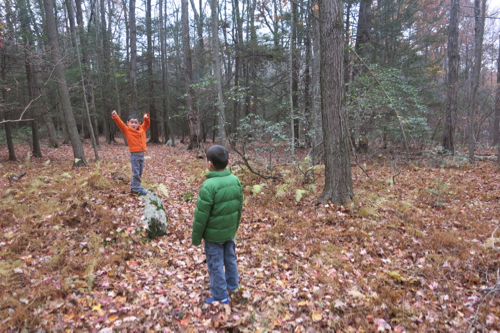 Up first, the Swan Preserve.

“Are they dressed warmly enough?” 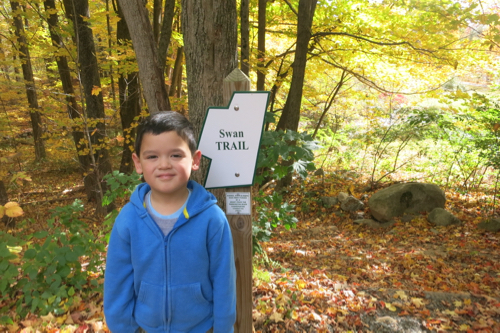 And off we went, northwest through West Simsbury to North Canton. This part of our little Nutmeg World, around routes 309 and 167, is one of my favorites. There are a bunch of great little trails here, both in Canton and in Simsbury. In the fall of 2015, I’ve been taking the boys out here as much as I can.

The Swan Preserve is the northernmost CLCT property in Canton. If you go, try to back into the little hiker’s lot. (Once there, the reason will be readily apparent.) And this is a good time to thank the CLCT for their handsome white Canton-shaped signs that are erected at each trail head. 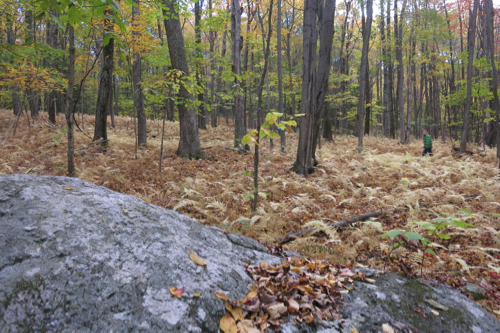 They make life much easier.

After the traditional arguments from Damian and the round of Smith-Magenis behaviors, we hit the trail. 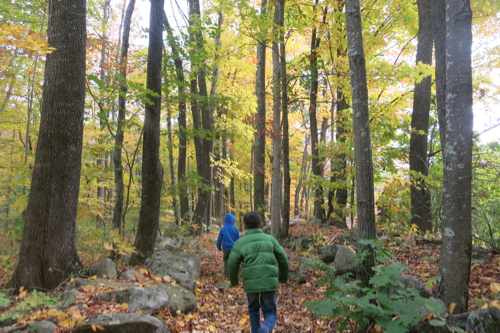 The Swan Preserve features 3 interconnected trails: The Yellow, Red, and Blue trails. (Interestingly, the Blue Trail was actually the Green Trail until recently. I suppose someone realized that green blazes among verdant plant life is a pretty dumb idea.)

The Yellow is the main loop at just under a mile, and the Red and Blue trails are loops off the Yellow loop. (Blue features the only real climb here and the red features a whole lotta nothin’ in its short 0.17 miles.)

All hikers start on the Yellow, with a pin-straight downhill past some private proper along a series of stone walls. The highlight of this first bit is the massive white oak at the bottom of the hill alongside the creek. 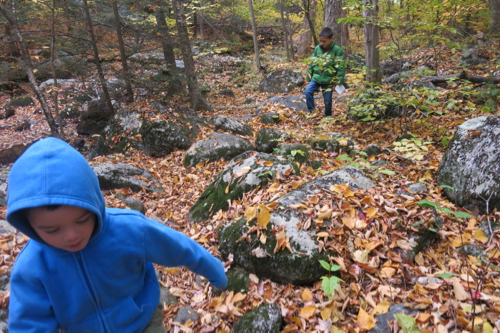 From there, a sharp turn to the left takes one along the creek over some fairly dicey rocks. I imagine this little stretch should be avoided after a major spring thaw, as its probably underwater.

A bridge took us over the creek to the southern end of the Red trail. We stuck to yellow and began the long sloping climb through the open woods.

Here, the trail took us through an amazing fern field. All the chlorophyll had drained from their fronds, resulting in a ghostly pale yellow sea of autumnal ferns. As I often think to myself, “If I was a real photographer, I could get some really cool pictures here.” As it is, I’m not, so I have a fairly boring picture of my sons in the distance, walking through ghost-ferns. 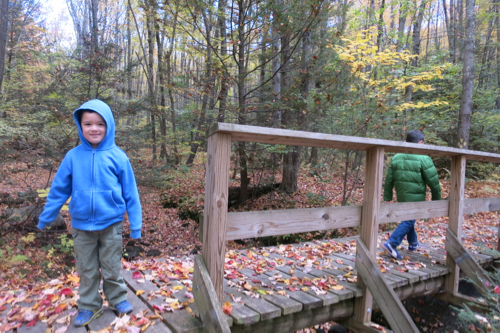 We branched off onto the Blue Trail (Calvin’s choice) and began a slightly steeper climb. Because we were climbing, I barely noticed a drop in temperature and the increase in windspeed from the northwest. The sun was still shining and the boys were content, so we pressed onward.

The blue trail actually reconnects with the yellow before tackling the steeper climb. This time, Damian decided we wanted to get back to the Yellow Trail, so that’s what we did. I was a little bummed we didn’t do the full loop, but that’s the way these land trust trails go. I am not super obsessive about walking every inch of their trails.

(Nor are you obsessive enough to want to read about every inch of every land trust trail either.) 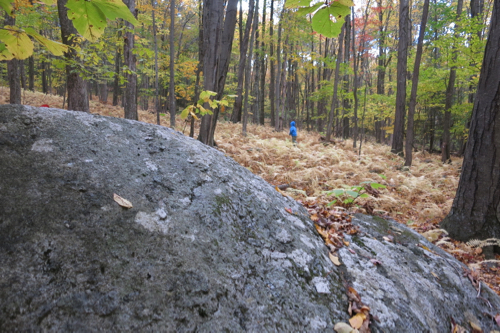 We reached the far end of the Yellow Trail and found a rock for the traditional drink box and granola bar break. As they sat, I got a text from my wife: “It’s SNOWING here!”

Wild! The sun was still shining here in Canton but now that we weren’t moving any longer, I noticed the chill in the air more than before.

I texted back, “Boys are fine; sun shining here!”

I walked around for about 90 seconds and then… what was that?

A snowflake? And then another?

What the heck? I urged the boys to finish up and get moving, lest they get too cold. 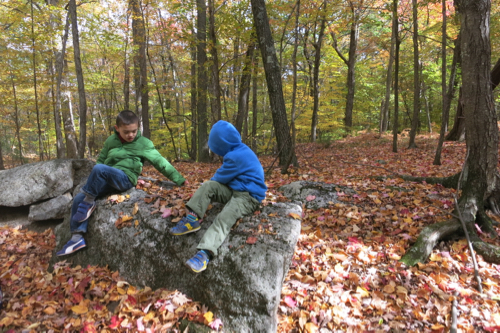 Once it started snowing a bit harder, the psychology of seeing it kicked in and suddenly, boh of them were “freezing.” (They weren’t, and the temperature was still actually near 40, despite the snow.)

I actually kind of liked the change in the weather, as it propelled Damian all the way down the hill faster than he’s every hiked before for some reason. (He was also being difficult, but that’s beside the point.)

He practicly ran down the hill as it really began snowing like crazy. (Again, this wasn’t “real” snow as it was well over 32 degrees and actually sorta sunny. Welcome to Connecticut.)

We made it back to the car quickly and the boys were magically warmed within 10 seconds in the car. 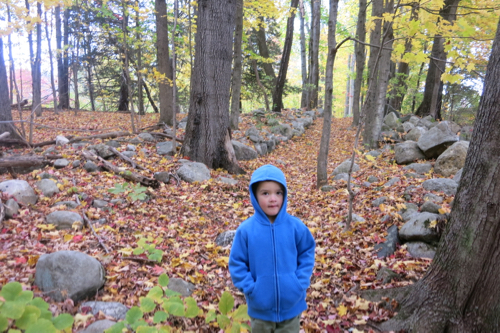 It’s nearly impossible for me to type “Winsor” without the ‘d’. I work in Windsor and of course we have South Windsor and East Windsor and I tie my ties in Windsor Knots and I fly out of Windsor Locks. 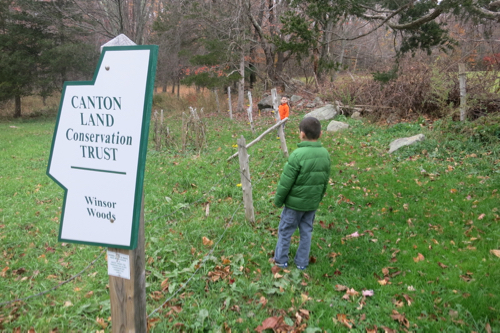 But this place, sort of hiden behind some farmland in North Canton off of route 309, is “Winsor Woods.”

And we hiked it. 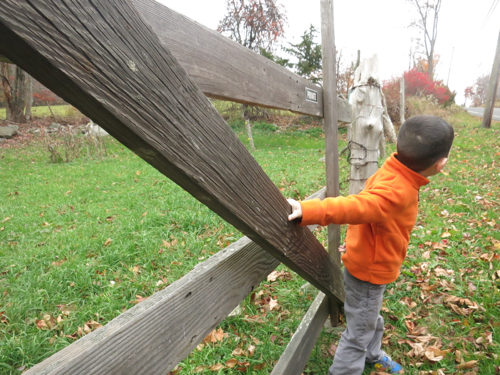 Calvin, itching to get going

Like the Swan Preserve, Windsor Woods is a trail network. Here, there are more trails (White, Blue, Red, Orange, Yellow) in a smaller space. They all loop back to the (somewhat sketchy) parking area.

The first bit of trail off the road is the worst – at least with curious and bumoly little boys. It follows a barbed-wire fence that purports to be electrified. As my sons “danced” and ran up the leaf-covered trail, I had visions of one of them tripping and falling into the barbs and getting shocked to boot. 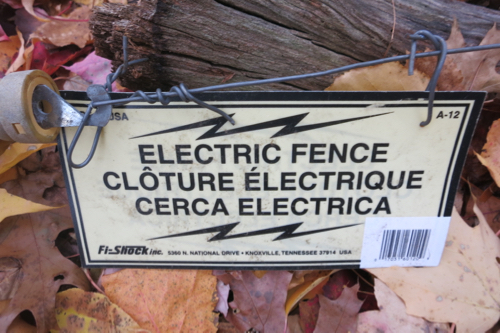 They were probably very confused as to why I was yelling at them to take it easy and slow down, but hey, I’m a dad. It’s what I do.

And if the barbs on the fencing didn’t get them, the sticker bush extending across the trail would: 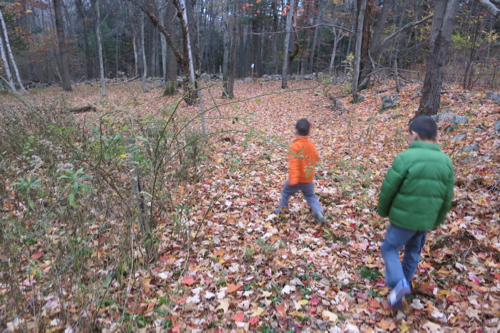 I grew up calling these “sticker bushes” but I think you Yankees call them “pricker bushes?”

I sort of let the boys do a “choose your own adventure” here, just like up at the Swan Preserve. Calvin always likes to lead, and he stuck to the White Trail (the longest, but not exactly long) and we began a clockwise jaunt.

The trails here climb the southern flank of the same unnamed thousand-foot hill. Once we began the climb up, it was actually quite steep for about 30-feet. With the wet-leaf cover, the boys comically would step and slide back over and over and literally get nowhere.

They yelled at me for help.

Then I got around to helping them up.

And I laughed again.

Here is Calvin recreating the scene: 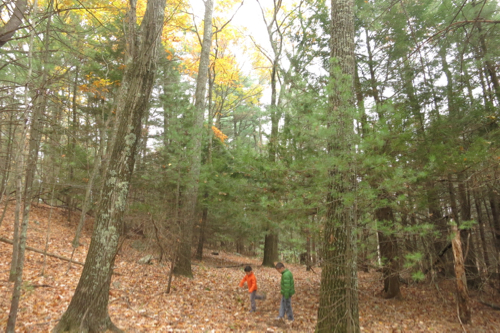 From the White we took a bit of the Blue to the Red back to the White then cut the northeast corner via the Orange. I was happy to have hiked on all the available trails. They were all marked and cleared well-enough for a small Land Trust. The Red was probably the “worst,” so to speak. 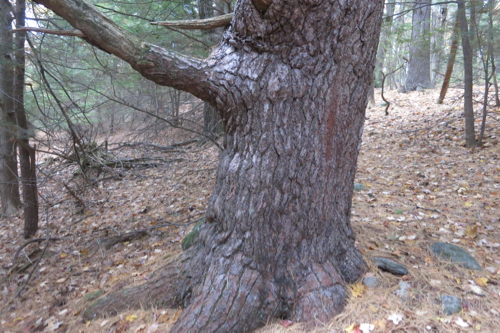 As we neared the end, we passed a few interesting trees. Some seriously old-growth white oaks and red pines are hidden away up here. (And a very serious “widow-maker” tree as well. Not that I expect the CLCT to deal with that sort of hazard at all, just pointing it out. These are trees that are either dead or have large dead branches/limbs that haven’t fallen yet. But they will fall at some point… just hope you’re not under it when it does. Hence, “widow-maker.”)

Then were was this tree trunk. Did you know my kid does tree impressions too? Well, he does: 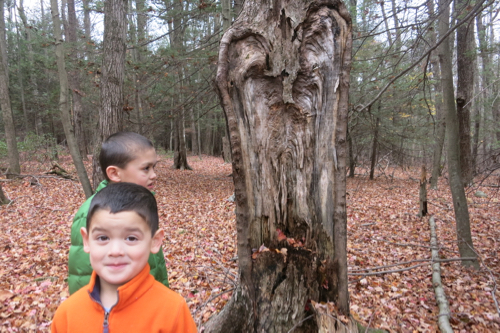 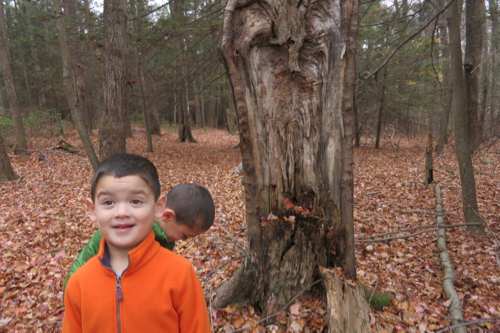 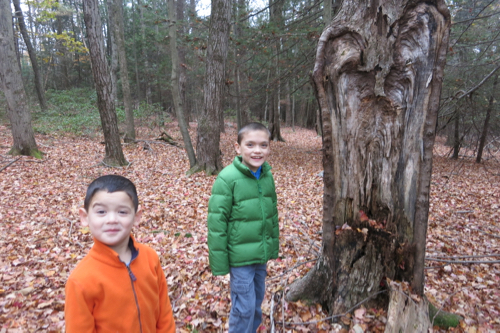 After that goofiness, we did the perilous walk along the barbed/electified fence again and were on our way to another short hike!

This property is very small, but does have that short little steep section. I was done wandering the place with these two clowns in about 25 minutes I think. Still, it’s a cool little spot and since there are so many other trailed properties in this corner of the world, why not check it out? 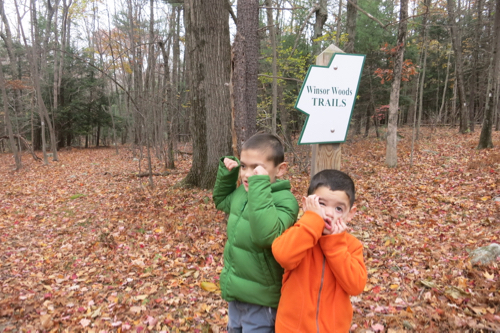