I’d recently been doing some hikes out in western Connecticut in the New Milford-Brookfield-Bridgewater area. I’d stumbled upon a few heretofore unknown museums on my forays back home in Roxbury and Woodbury – pretty much the most exciting thing that happens to me on my travels. 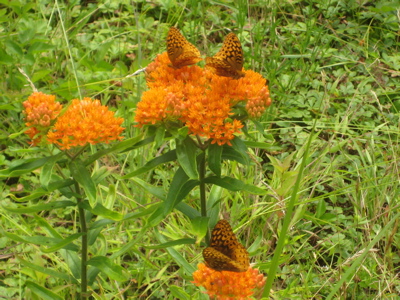 I’d passed by the Brookfield Nature Center a year prior while doing a day on the Connecticut Wine Trail with Hoang and Damian; I noted it, threw it up on my list and could never find out if it held a museum-like nature center or not. I wondered for 8 months… Will I have to remove a museum listing from my ridiculously long list?

I satisfied my curiosity, finally, on my way to one of the Sunny Valley Preserve trails up in Bridgewater I sped by the overgrown entrance, did a “Dukes of Hazard” 180 in the middle of Route 133 and entered the property. 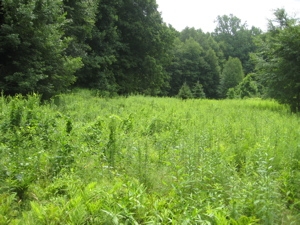 There’s a small parking lot and a nice house – but with a “Not open to Public” sign on it. Hm. There is a nice well-kept map of the area which I scanned for a proper nature center. Nope. In despair, I picked up a trail map and gave it a quick look – just to see what this place offered visitors.

The very short trail network has descriptors like “stone wall,” “The Big Tree,” “Mosses,” and “Old field.” Sigh. I can see that stuff within 2 minutes of my house. I shoved my camera into my pocket dejectedly, mopped the sweat beads off my brow and looked at the map once more.

There! Sweet, sweet redemption! Nature Trail site #9 – “Rock Museum and Dead Tree!” My list stays intact! All I had to do now was lock my car (one never can be too careful on the mean single-lane dirt driveways of Brookfield) and hoof it a bit. Awesome. 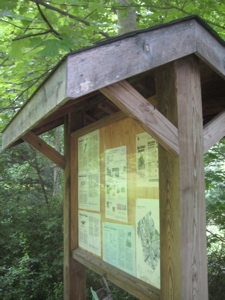 As I made my way past a natural “garden” and successional areas, my mind reeled at what a “rock museum” in the middle of a field could possibly be… And paired with a “Dead Tree” to boot. Did the Grateful Dead hold a concert out here and Jerry Garcia carved his name into a white pine? Or did the tree die as a result of rock fans making root-stomping pilgrimages to the rock museum?

Just then, I stopped to marvel at the orange butterflies alighting on some bright meadow flowers. Deadheads would totally dig this! A couple of the little guys even landed on my shirt (it was bright orange too). Totally trippy, maaaaan. I did a little hippie dance and then I saw it: The Rock Museum and Dead Tree! 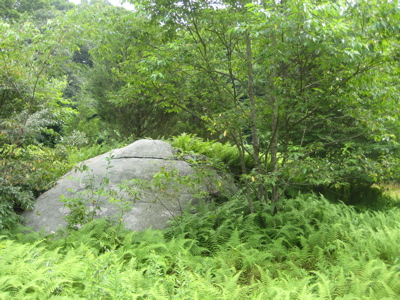 There were a few rocks and if there was a dead tree, it was on its side and overgrown with all sorts of junk. With my extreme reaction to poison ivy, I really didn’t feel like poking around too much. Sorry. But what about the rock museum itself?! 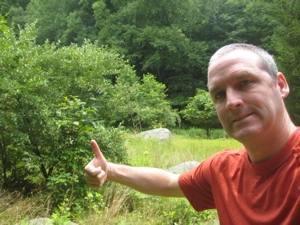 The bedrock under the site is mostly sandstone and shale. The bedrock is covered by a thick deposit of compact sandy till left during the last glacial age. Sometimes on slopes the bedrock is exposed. Holes in dead trees provide homes to raccoons, woodpeckers and owls. Wildlife species feed on the insects that live in the decaying wood.

Oh. No endless noodly guitar solos or patchouli dirtballs selling beads. Just a few rocks and a purportedly dead tree. But that didn’t diminish my excitement; no, not at all. 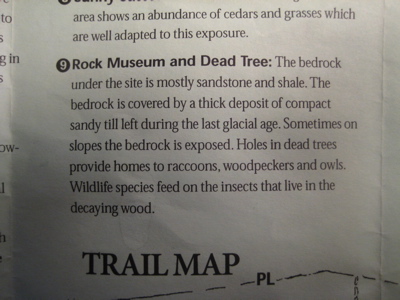 For I had now visited the Rock Museum in Brookfield. Truth be told, I have no idea why it’s called a Rock Museum, nor do I care. It is an official museum – plus, the Nature Center itself is rather nice. No, there’s no actual building housing dead animals and exhibits on the Native Americans who lived here, but we’ve seen enough of them. 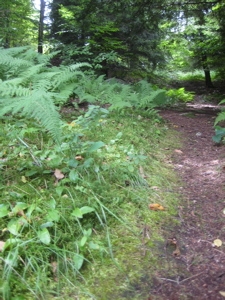 This place is unique. I hiked the major loop in about 8 minutes and saw a surprisingly rich array of habitat. Open woods (hard and soft), meadow, marshland… pretty much a microcosm of what Connecticut has on offer.

Is this a place to drive 90 minutes to visit like I did? No. But if you live in the area and want to educate the kids along a short hike? Sure, why not? And they might even have some butterflies land on them as a bonus! 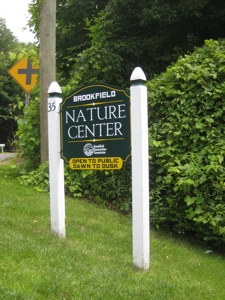