The South Green attracts a few of Middletown’s more transient folks and I am now chuckling at the thought of asking them to point me the way to the Henry Clay Work bust. And I don’t know why. 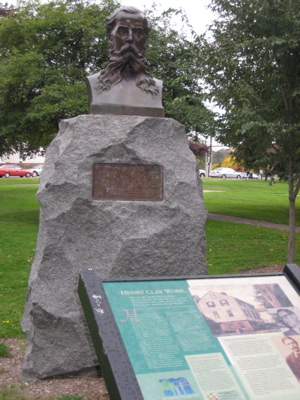 Who is Henry Clay Work? I had no idea… until now. While his bust looks like he was some sort of rival to Poseidon, he was in fact a composer. Henry Clay Work was born in Middletown in 1832, the son of an impassioned abolitionist named Alanson Work. When Henry was about three years old, his father moved the family to Illinois so that he could help slaves escape to Canada on the Underground Railroad. During the next few years Alanson Work helped over 3,000 slaves reach freedom and was finally arrested and imprisoned for his activities. After his release from prison, Alanson Work brought his family back to Middletown for several years. (Heres’s a video of his childhood home nearby.)

When Henry Clay Work grew up, he worked as a printer in Hartford and Chicago. In his spare time, he taught himself music and began composing songs. Before long, his first song was published; in the decades following, Work penned some of the 19th century’s favorite tunes. Many focused on social issues of the time, such as the temperance movement or the condition of African Americans. In 1865, Work wrote “Marching Through Georgia”, a Civil War anthem celebrating Union General William T. Sherman’s 1864 campaign that destroyed Confederate supplies, liberated slaves, and helped bring about the south’s surrender. 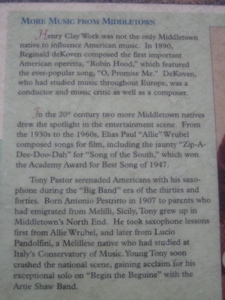 Henry Clay Work’s most popular composition was “Grandfather’s Clock”, a sentimental ballad about his grandfather’s “treasure and pride”, a tall clock that “stopp’d short, never to go again, when the old man died.” The 1875 song sold nearly a million copies and earned the then considerable sum of $4,000 in royalties.

Despite his success as a songwriter, Henry Clay work’s life had many tragedies: three of his children died young, his wife lost her sanity and had to be institutionalized, and Work lost nearly all his money in two ill-fated investments. In 1884, the composer died in Hartford after writting over 70 songs. People around the world still sing some of them today.

There were other composers from Middletown, but one jumps out to me. Elias Paul “Allie” Wrubel composed songs for the “Song of the South,” including “Zip-A-Dee-Doo-Dah” which won the Academy Award for best song in 1947. Fascinating.