For those of you who don’t know, and why would you, I am a professional researcher. I create wonderfully exciting reports for various life and health insurance companies on topics such as “Broker and Producer Expectations Under PPACA” and report on things like Consumer Attitudes towards Accident and Critical Illness Insurance. 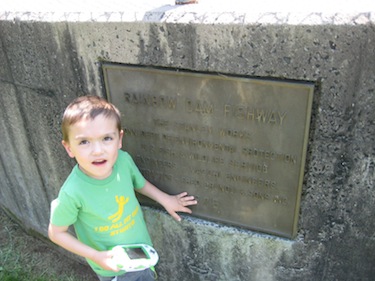 I bring this up for two reasons: One, Rainbow Dam is not far from my office at all. As such, I’ve driven there on a few occasions to sort of absorb the proceedings over there. And two, as a researcher by trade and for fun, I can’t help but make this page over-long and overly-critical.

Critical of the entire late 20th century fish-ladder nonsense. Yes, nonsense. As it turns out, from much of what I’ve gathered, these things are fairly useless for what they are intended. And as sad as that makes me, it’s not half as sad as the continued spectacle of pretending these things are working makes me. 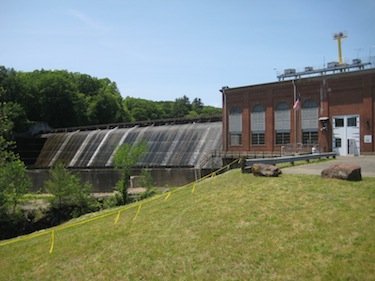 For now, for the 99% of you that just want to know if this is something you’d like to check out, I’ll spend the first half of this page on answering that question. Then I’ll get annoying.

The main attraction here is the Rainbow Dam fishway, the outdoor portions of which are pretty much open all the time. There is an indoor viewing area as well, but I¹m not sure how often that’s open. Damian and I visited during the annual open house event in June.

As far as I could tell, the advantages to going during the open house are: 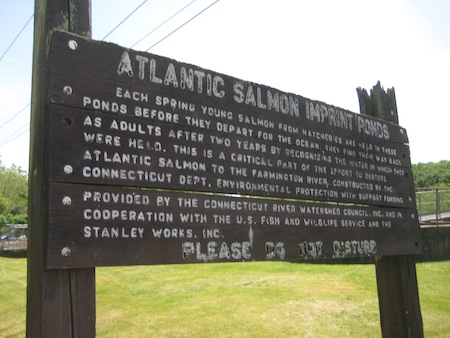 I don’t know what you’ll get at other times, really. Just a dam to look at? Just… dam. (From early May through late June, the viewing platforms are apparently open from dawn to dusk.)

Here is the “official” blurb:

See migrating fish in the underground viewing window at DEEP’s annual OPEN HOUSE at the Rainbow Dam Fishway in Windsor. The public is invited to visit the fishway and learn about both it and the fish it passes. During this day, the public can tour the facility and are encouraged to go downstairs and check out the underground viewing window. Shad and lamprey may be seen passing upstream, and Atlantic salmon are sometimes captured for breeding. Staff will be on hand to answer questions. This is a GREAT ACTIVITY FOR FAMILIES, and there is no fee.

You know it¹s good WHEN THEY GO WITH ALL CAPS. 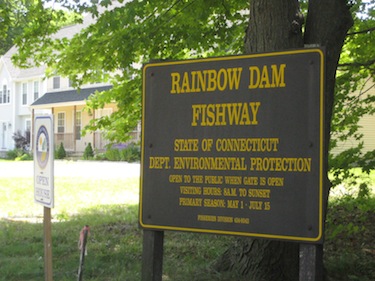 Hey, at least they didn’t pretend that you might see an actual wild salmon up here in Windsor. Props.

We had fun. I was surprised at how many other people turned out for the Open House event though. There is a large and informative kiosk one can read before going to the actual viewing areas and if you don’t know anything about how anadromous (and I suppose catadromous) fish live their lives.

Oh, wait. I’m sorry. I forgot that not everyone reading this studied ichthyology in college like I did. I’m so presumptuous. Anadromous fish are the ones who are born in fresh water (rivers and streams), go hang out in the ocean for most of their lives, and then come back upstream in fresh water in order to spawn. In other words, the types of fish we’ve pretty much destroyed everywhere in the US.

Anadromous fish that you are aware of include smelt, shad, salmon, striped bass, and sturgeon. Here in central Connecticut, we built tons of dams which killed off massive populations of these guys, so as it became dire, engineers dreamt up fishways and fish ladders.

(Catadromous fish are the opposite; born at sea, fresh water rivers and streams to live, back to sea to spawn – think: eels.)

And fish ladders and fishways are noble, wonderful ideas; no doubt about it. Too bad they don’t really work. 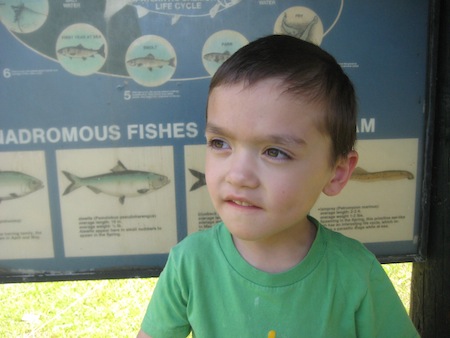 But they look pretty cool and they provide something interesting to learn about on a hot summer’s day. Here, at Rainbow Dam, there is a grated steel walkway that allows visitors to get a great idea of what the fishway looks like and even juts out a bit high above the Farmington River. This platform gives a nice view of the giant dam and the river below – and the long path a fish would have to take to get upriver.

Damian surprised me by walking out on the grate. I don’t think he fully appreciated that there was a lot of space beneath him though… if he had, he’d have freaked out. 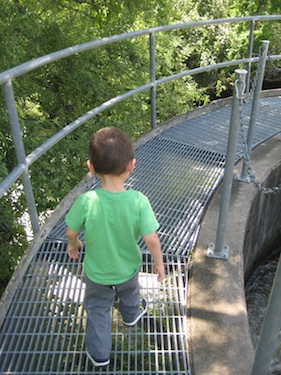 Since this was Open House day, the Stanley Works folks were on hand to give little tours of the hyrdo building. No, it’s not really that interesting… Except that it is!

A little bit anyway. Damian and I went into the turbine room and marveled at the giant things. When I learned that these were the originals from 1925, I was pretty impressed. Damian, meanwhile, was happy spinning the little tiny hand-cranked turbine to light a little bulb. 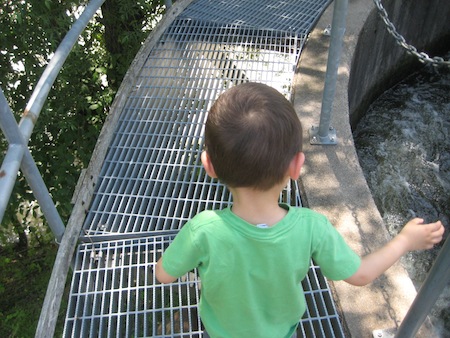 Incidentally, this area along the river has a rather important dam/power history. The Oil City Dam, located about a 1.5 miles upstream of the present day Rainbow Dam, generated electricity in the latter part of the 1800s. This plant burned to the ground in 1897 but was immediately rebuilt of brick. Also located on this section was the Farmington River Power Company which transported electricity 11 miles to Hartford. This facility, financed and constructed by Edward Clinton Terry, was the first hydro-electric plant in the world to transport energy a long distance. You can still see the remains of the bridge abutments for this dam – and I did check them out on a hike on the other side of the dam. 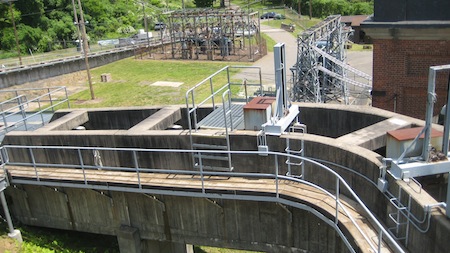 (This is a rather interesting article about what you can find when they drain the reservoir every so often.)

Today, the Farmington River Power Company is a subsidiary of The Stanley Works and the company is responsible for the dam, the power and the fishway. Over the years, the company has battled back a bit, like in 1992 when it was suggested they spend $100,000 on a pipe to allow the salmon smolt to go downstream.

Restoring Atlantic salmon to the Connecticut River Valley has been a long (25 years) and expensive ($100 million) project. Finally, after 200 years of absence, the great game fish are beginning to swim up the Connecticut and its tributaries in growing numbers each year to spawn.

But getting the young fish, or smolts, safely downriver and into the ocean where they mature has run into a snag on the Farmington River. The Stanley Works’ hydroelectric Rainbow Dam in Windsor has the appropriate fish ladder to help salmon get upstream. But it needs a bypass pipe so the 2-year-old, six-inch smolts won’t be chopped to pieces by the dam’s turbines as they head out to sea. 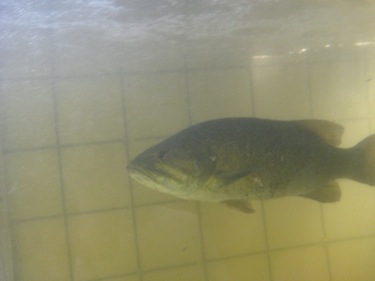 It goes on. And now, in 2013, the program has been scrapped as a failure, as salmon are certainly not returning to our Connecticut rivers. And, while we’re at it, the hydropower generation schedule at Rainbow Dam strongly influences the fish population and other wildlife downstream. Releases of water from the dam are erratic and these flow fluctuations reduce the numbers of nearly all aquatic plant life forms and aquatic insects.

The Reservoir created by the dam is merely recreational. Some fishing and boating and birdwatching and that’s about it. So when Damian and I went to the viewing area and saw a bass sort of languishing in the window, it made me sad. It almost made me feel like that bass was caught and dropped in there as a “show” of what it would look like if an actual spawning fish was going up the fishway. (not that bass even do that.)

Not a single fish went up the fishway during our visit. I know that some fish really do use the thing and that it does serve a good purpose. But to read the initial accounts of the project make it seem like there was going to be salmon positively jumping over themselves to get upriver. 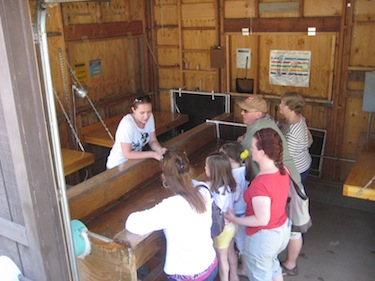 Damian rather enjoyed watching that sad, lone fish struggle to maintain its position in the window. He liked checking out the little educational area where a DEEP worker explained the state of the state’s current fish restoration programs. He liked watching the various man-made “waterfalls” that tumble hither and yon at Rainbow Dam.

But the whole operation sort of troubled me. I’ve read too much about the failed salmon program and the struggling shad program. Not to mention the dying smelt and herring fisheries. You know what works best at these fishways? Sea lamprey.

And the lamprey never get any press. Because they suck.

Anyway, Karl Meyer wrote a damning piece highlighting the glaring deficiencies at Rainbow Dam in an essay titled, “The Devolution of a River Restoration: killing the Connecticut softly.” Read it, it’s really interesting – if hyperbolic. 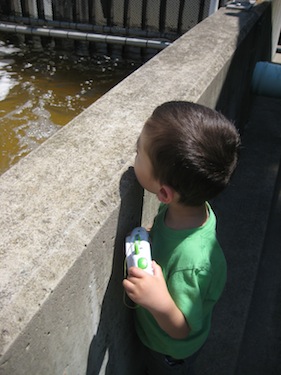 Meyer’s blog is somewhat controversial, and arguably incorrect to a degree. Some excerpts:

This fishway is a trap. It kills fish. In fact, the Rainbow Fishway kills most of the fish the New England Cooperative Fisheries were charged with restoring way back in 1967—the American shad and blueback herring that once fed humans along 172 miles of the Connecticut River, as well as up tributaries like this one–all the way from Long Island Sound to Bellows Falls, VT.

Lacking scales, a’ la salmon, the scrappy sea lamprey is this fishway’s—and the Connecticut River restoration’s, single, unequivocal, unintended success. By the end of the 2010 spawning season Rainbow had passed a grand total of 4 hybrid salmon. But 3,090 sea lamprey made it out the top of Rainbow–exhausted, but otherwise uninjured. 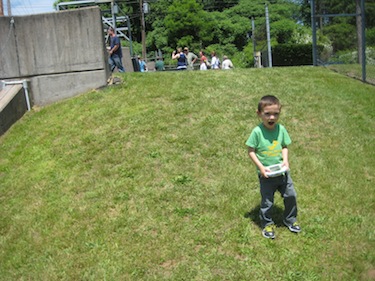 Concurrently, those narrow, flaying, concrete slots injured and likely killed all 548 American shad and 25 blueback herring that were counted as “passing” the fishway. That number is a trick. The counting window is located in the bottom third of those 64 treacherous pools–where hapless, de-scaling migrants still have a wrinkle of life left in them when the staff checks them off.

One biologist refers to Rainbow Fishway as “the world’s greatest shad de-scaler.” That’s what it does–it rakes the scales off hapless two foot-long American shad, drawn into those narrow slots by the upstream current. Thousand perish annually. With bellies flayed raw in the effort, they either wash back down downstream, or expire after reaching the top of the dam. The smaller, foot-long herring receive the same fate. And the public hasn’t a clue. Remarkably, Rainbow holds an “open house” each June, with smiling state fisheries personnel standing over a few listless shad, live-trapped at the base of the dam. They politely explain how the system functions… The place is a PETA protest waiting to happen.

Wow. I wish this wasn’t true, but it is. At least to a very large degree.

I don’t mean to ruin your own visit to the dam and fishway. Really. It IS a pretty cool thing to do with your kids: learn about power generation, dams an migrating fish. You can spare them the gory truth I’ve laid out here.

After all, it has the word “Rainbow” in its name, right? 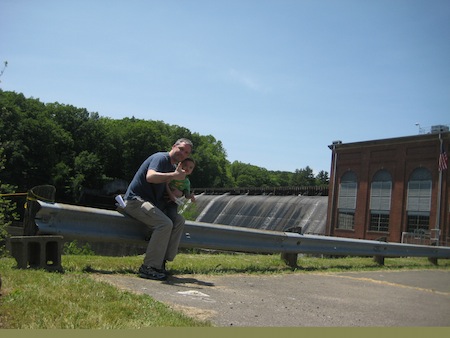