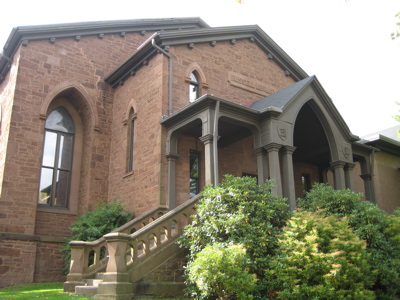 Taking a picture of a library results in many curious stares.

Most importantly, I found my Middletown Heritage Trail brochure here to get me started. And almost as important, their website provides everything else I need to say about this place.

“Frances Russell established Russell Library in 1875 in memory of her husband, Samuel. The Episcopal Church of the Holy Trinity had built the building on the corner of Broad and Court Streets in 1834, and Mrs. Russell purchased and remodeled it in the Roman Gothic Style. The building opened as the public library for the City of Middletown on April 5, 1876. In 1930, the City helped to add the Hubbard wing, and in 1972 completed the remodeled Children’s Library, originally the First Federal Saving and Loan Association of Meriden, built in 1965.”

There’s more to the story on the Heritage Trail sign that you can’t read here: 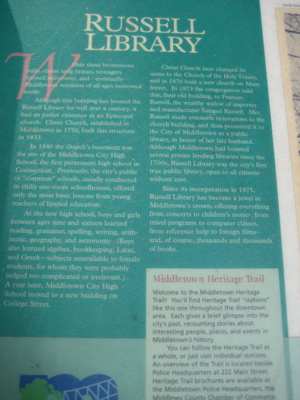 The most interesting aspect of the Russell Library is that while it indeed began life as a church, the basement housed Connecticut’s first permanent high school in 1840. (Though “permanent” seems a bit strong of a word here, no?) At the time, schools were all in one room schoolhouses and education was not paramount.

Of course, education of young women wasn’t paramount here either, as for some reason they weren’t allowed to take the algebra, Latin, Greek, and bookkeeping courses. I guess, in a way, they were lucky for that.

Lastly, the brochure cryptically states, “Sec. of State Acheson; a female doctor.” Now I know those two people aren’t one and the same, but I have no idea what their connection to the library is. Dean Acheson was born in Middletown so maybe he went to school here? He went to Groton and Yale and Harvard and then served on the in-town Wesleyan faculty where he undoubtedly became the commie that Joe McCarthy exposed him to be. Ha.