So This is Where Basket Weaving 101 Was Taught
UConn Storrs (Google Maps Location)
February 25, 2009

I appreciate two things about this museum. One, its name is clear, concise and to-the-point. Two, it’s very, very small.

Continuing my full afternoon at UConn’s various museums and museum-like places, I moved my car from the free parking at Huskies on the north side of campus to some more free parking in the shops at the south end. Why pay for the garage when I can park for free and walk, perhaps, an extra five or ten minutes? 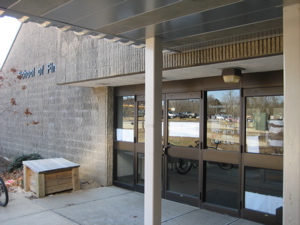 In my four years at UConn, I don’t think I ever really ventured to the extreme south end of campus, save for the easiest A I ever earned – Music Appreciation at Von der Mehden Hall over there. But south of that? To the music and various art buildings? Let alone to visit any of the hippies who lived in South? Never. In four years.

But here I was, wandering around these completely foreign buildings looking for the Contemporary Art Gallery. I had just only recently decided that these types of galleries warranted CTMQ inclusion – as they are permanent galleries exhibiting art that is not for sale. Pretty much every Connecticut college and university has one or more. Yay for us all! 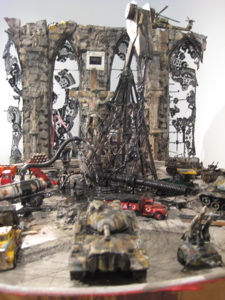 One fun thing at college art galleries is their ever-present endless pretention. And boy, this one sure had it in abundance.

I first entered the music building in error and found a museumesque display case showcasing the following: 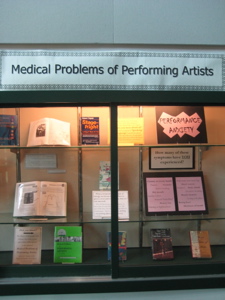 Oh my. I must admit, I laughed. Audibly. I actually stood there and read a bunch of the arts related injury notes. Singers apparently often succumb to something called “Abnormal Forward Head Posture.” Moving on…

I found the building and entered a world unknown to me during my time in school. The artsy world. It must be noted that the students milling about actually didn’t look all that annoyingly artsy. In fact, they looked fairly normal. Maybe that’s the current “thing” in the art world. Post-Bush-Irony or something.

But the receiving room was annoying enough. The walls were covered with some senior’s dopey art thesis which consisted of haphazardly taping pieces of paper with large digital-looking font letters that were hard to discern as being letters except from far away. And symbols. Lots of nonsense symbols. It looked very amateurish and banal. I moved on. 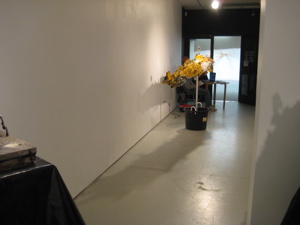 There is a “pit” area outside the gallery that was completely empty (maybe the art kids post-Bush-ironically dance here or something) except for the walls. Yes friends, the walls displayed a bunch of woven baskets and basket-like things. Apparently there IS a basket weaving 101 course after all. On to the gallery proper.

I entered to find two thoroughly bored looking kids on their laptops. The guy never looked up from his and the girl, to her credit, did notice me enter and walk two feet in front of her. Eyes half-mast she stared at me. I said, “Is this the gallery?” and got a tired nod. She did – again to her immense credit – offer me a guide to the exhibition and immediately went back to Facebooking or whatever it was that was so important. 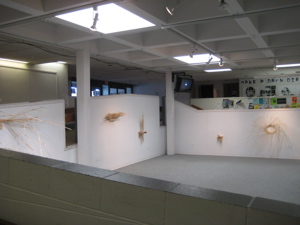 Argh. Their website doesn’t allow for simple copy and pasting! I hate that. Especially since I wanted to show you their first sentence: “The Contemporary Art Gallerie’s [sic] mission is to present a professional exhibition and educational program that is multi-disciplinary and culturally diverse.” It continues on as you’d expect. 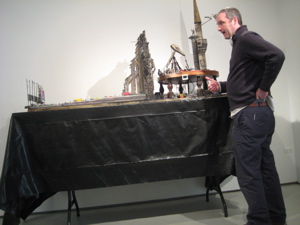 The entire gallery can be traversed in about 10 steps. And that’s the long wall. Says they:

The front entrance will be open to the proposed village green, envisioned as downtown shopping and residential district. A “path” will lead through the building and acts as a place for interchange among the painters, the artists, the musicians and theater people as well as students not in the arts. Another “path” on the building’s second level will be encased in glass so that people passing through can view art, listen to music or watch a theatrical rehearsal without disturbing the students.

The design will include an opera hall, a new recital hall, a concert hall, photo and video production labs, galleries, studios, and even an animatronics lab and a foam rubber oven room for the puppetry program as well as a cafz (sic) flanking the building.” 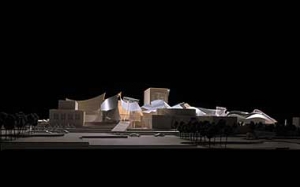 Oooh, a cafz! So students can buy some delicious cofzz!

I was fortunate that the current exhibition is pretty cool. It was titled “sculpture/fetish/object things” by Peter Waite. He has made a bunch of fairly large 3-D displays from “found objects.” Paint scrapings from easels were used for color, and various odds and ends made up the rather intricate scenes. Yes, I liked it.

Of course, Mr. Waite could help you with his explanation of his installation, but again I cannot copy and paste for you because the CAG website is infuriating. Sigh. I’ll just leave it alone and say his exhibition is titled “sculpture/fetish/object things” again and that tells you enough. 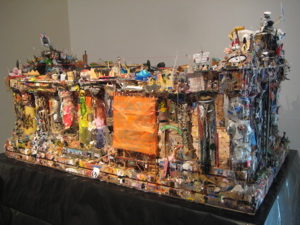 It turns out that Mr. Waite is a rather accomplished artist, and his paintings have shown at some very prestigious institutions to positive reviews. Poking around his site, I find I rather like his paintings. You can check them out here. They often show empty places – places that often are not empty like a restaurant table or blackjack pit at the casino.

A local Connecticut artist, Waite began dabbling with this found sculpture business out of boredom from painting. I can appreciate that. Sort of like how I started writing about everything under the Sun in Connecticut beyond museums at some point.

Again, I thought the exhibit was definitely cool. Lastly, that four page handout I was given upon entering? It contains Waite’s explanation of each piece and while I initially scoffed at what I thought it was, it turns out that it’s pretty funny and he’s definitely a guy who has fun with the whole art world pretention thing. I support this local artist. 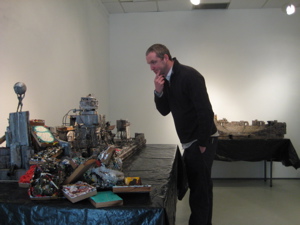