Go Ahead, Ham it Up
Newington (Google Maps location)
August 2016

Here’s a museum that I’m afraid I don’t know much about. I clearly visited it. I clearly spent a good amount of time there. And I was clearly welcomed by the kind folks in Newington: 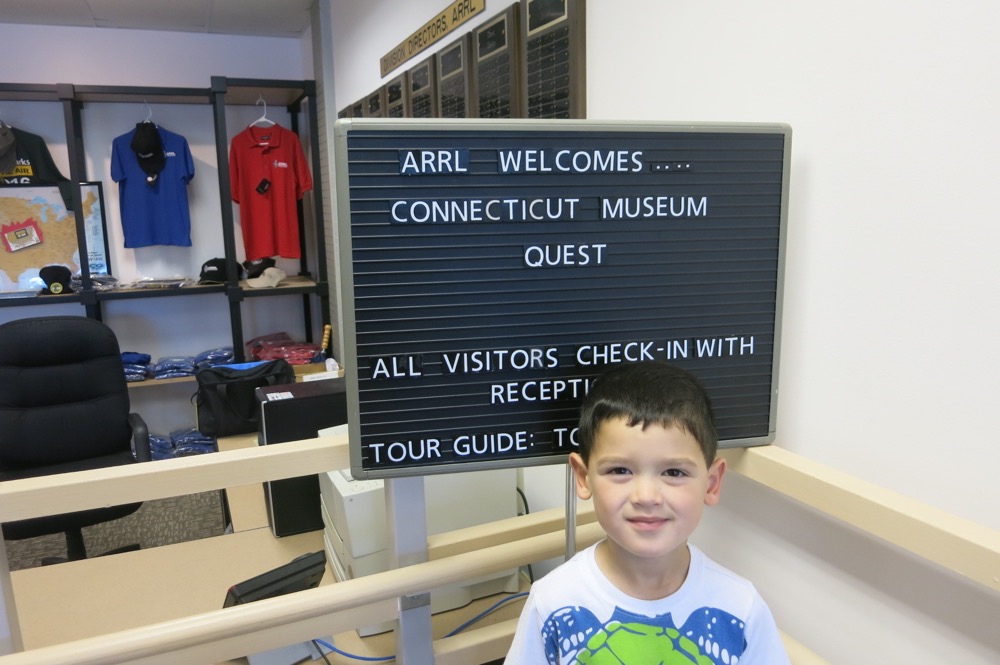 Awwww *blushing*. That was very sweet. You know what else would be sweet? If I get around to telling you what the heck “ARRL” is.

ARRL is the national association for Amateur Radio in the US. Founded in 1914 by Hiram Percy Maxim as The American Radio Relay League, ARRL is a noncommercial organization of radio amateurs. ARRL numbers within its ranks the vast majority of active radio amateurs in the nation and has a proud history of achievement as the standard-bearer in amateur affairs. ARRL’s underpinnings as Amateur Radio’s witness, partner and forum are defined by five pillars: Public Service, Advocacy, Education, Technology, and Membership.

Phew. That is some seriously high-minded stuff right there. Amateur Radio, to me, means HAM operators. Shortwave guys? I don’t really know. I guess we’ll learn here together today. (Please note, I’m writing this 6 years after visiting – don’t ask – and while I’m no expert in anything, I’m really no expert in amateur radio.) 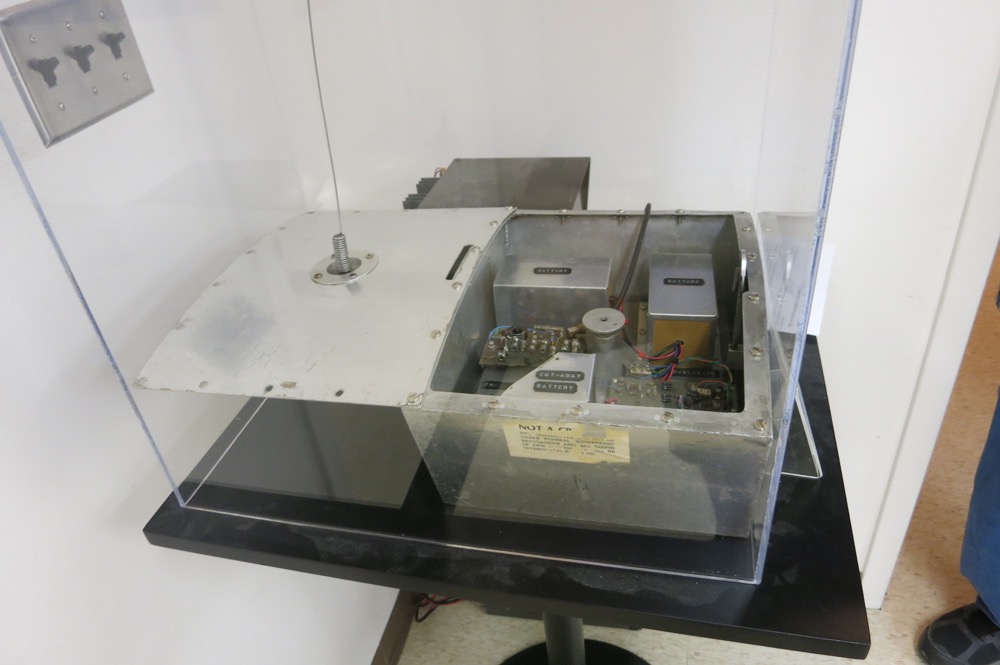 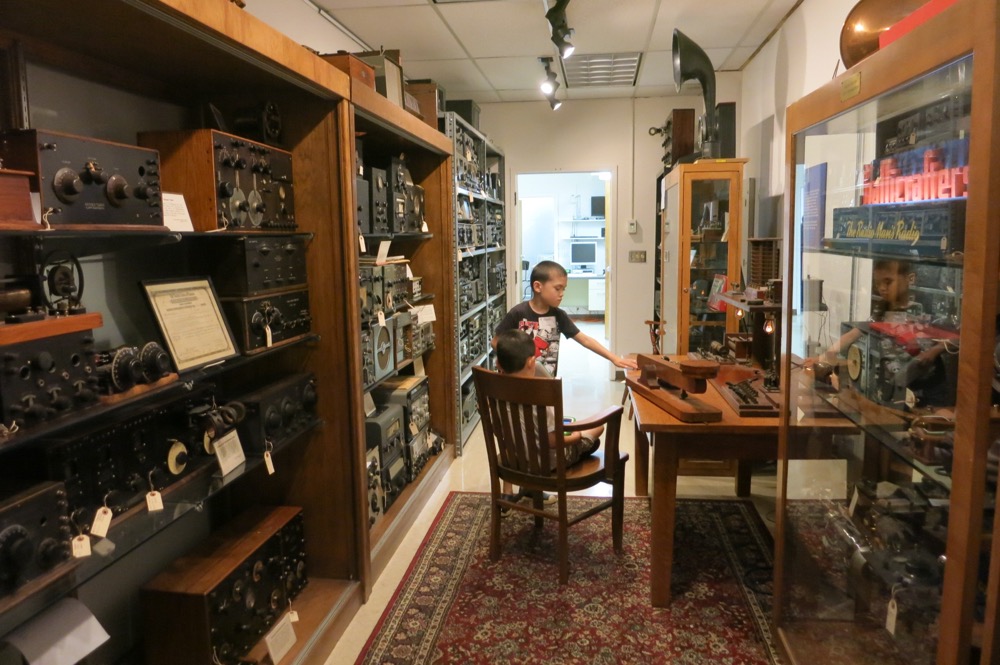 First, I believe you must reach out to the ARRL folks to let them know you’d like to see the museum. I’m not sure. Anyone with a radio license can visit and do what they do, but for you and me, we must make an appointment. (Hence the sign above.)

So this place is a few things. It’s a radio station. It’s the headquarters of the ARRL. It’s an outreach and advocacy center. It’s a classroom for both operators and engineers. And it’s a museum.

And the museum is impressive. It has a collection of historic radio equipment and tells the story of amateur radio from Marconi (whose full name was Guglielmo Giovanni Maria Marconi, 1st Marquis of Marconi, by the way) through the hobby craze during my childhood. I learned about the first radio cables and such out on Cape Cod. There are several “history of radio” stops to make there: The French Cable Station Museum in Orleans, Chatham Marconi Maritime Center, and of course, Marconi Beach, site of the first successful transatlantic radio message on January 18, 1903. 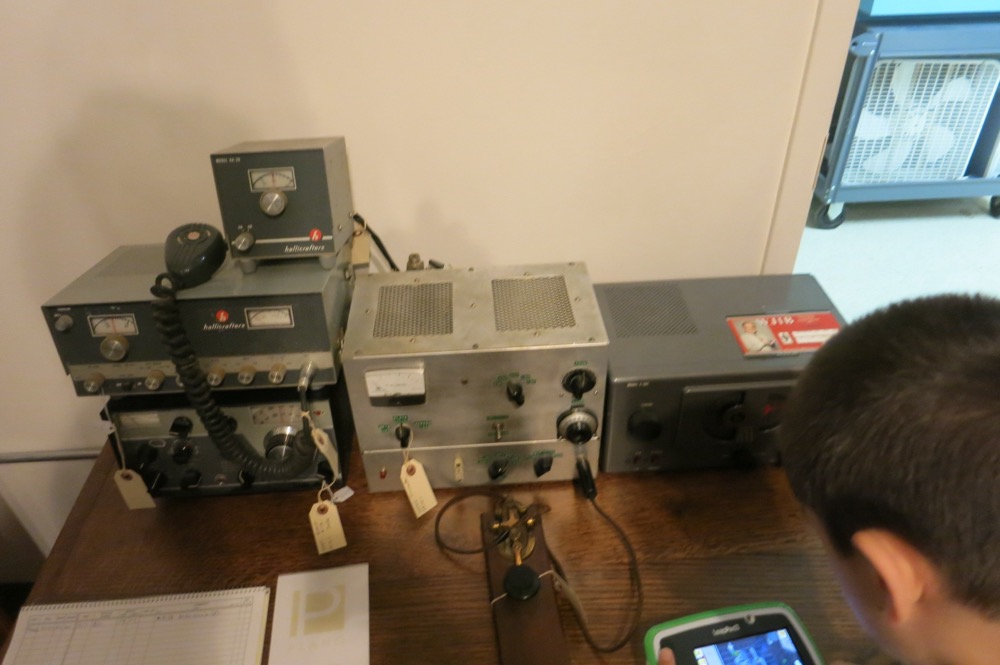 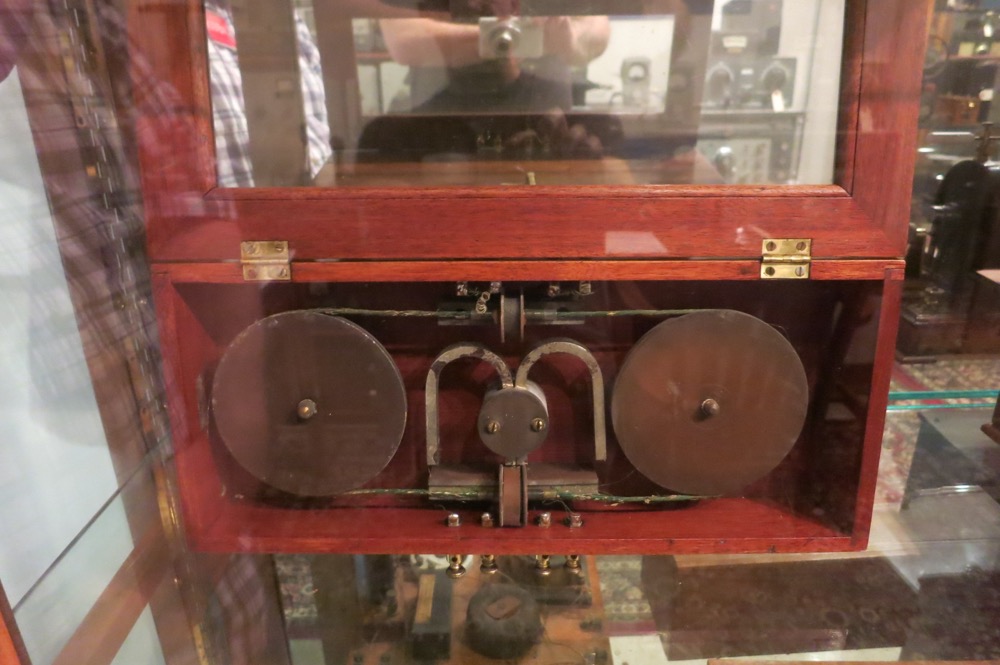 The Hiram Percy Maxim Memorial Station is known the world over for its on air Morse code practice sessions and news bulletins. When visiting ARRL HQ, W1AW is the first place members want to see.

As a non-member, I was unaware. Shame on me. But W1AW is historic. I can’t quite sort out why, exactly, but it is. W1AW is the callsign of the Hiram Percy Maxim Memorial Station in Newington operated by the American Radio Relay League. It is called a legendary station and it provides daily bulletins to amateur radio operators on current activities, operating conditions and regulatory issues. Also, daily Morse code practice sessions are provided. I don’t have any clue how I’d listen to it, or if I did, I’m not sure I’d understand what I’d be listening to. To wit:

Bulletins are sent using 45.45 baud Baudot, PSK31 in BPSK mode and MFSK16 in a daily revolving schedule… On Tuesdays and Fridays at 5:30 PM Central, Keplerian elements for active amateur satellites are sent on the regular digital frequencies, using Baudot and PSK31… there’s a whole daily schedule. There’s a million different ways to listen, but it seems like 147.555 MHz is the most consistent. 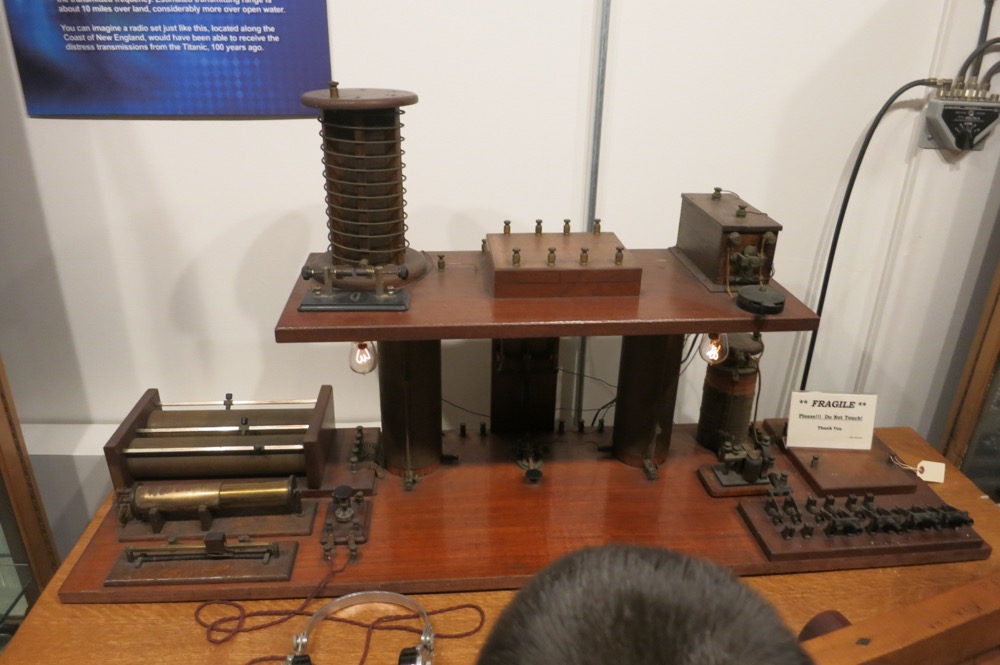 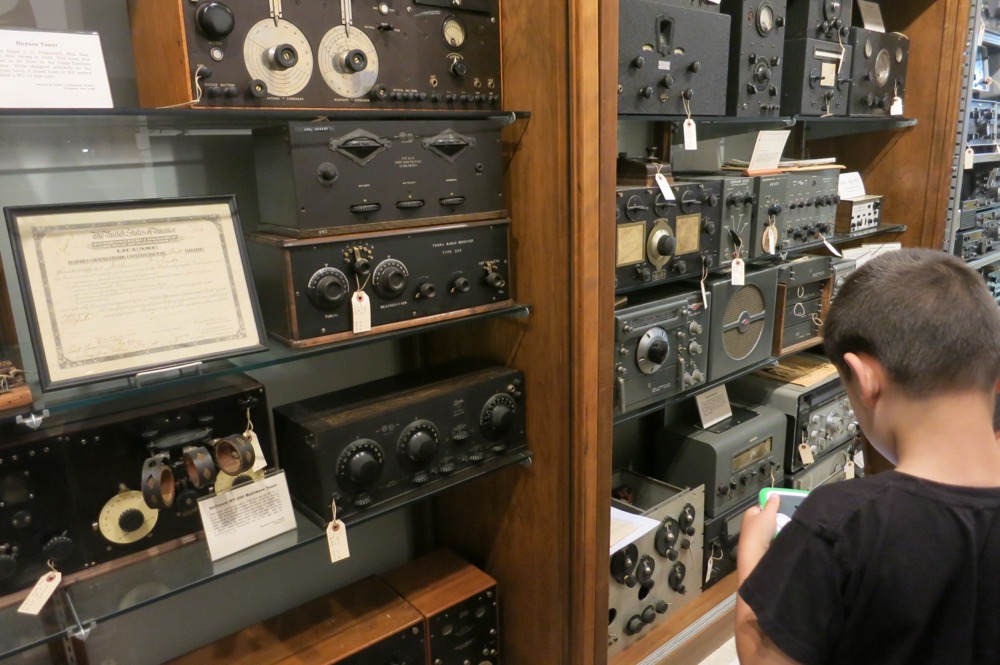 The whole thing started with Hiram Percy Maxim in 1924, not too long after radio became publicly available. Maxim founded the League and served as its president until he died in 1936 – the same year a Connecticut River flood destroyed the original station at Brainerd Field in Hartford.

So check this out! The League decided to build a new station in Newington in memory of Maxim, so the FCC assigned W1AW to it and guess what? Those were the very first call letters ever assigned to a radio station by the FCC. Historic! The station has operated here since its dedication in 1938 when it was just a building on a slight hill surrounded by acres of fields.

The ARRL added its headquarters here in 1963 and the building has undergone several improvements and renovations over the decades, always being mindful to keep it looking as it did nearly a century ago. 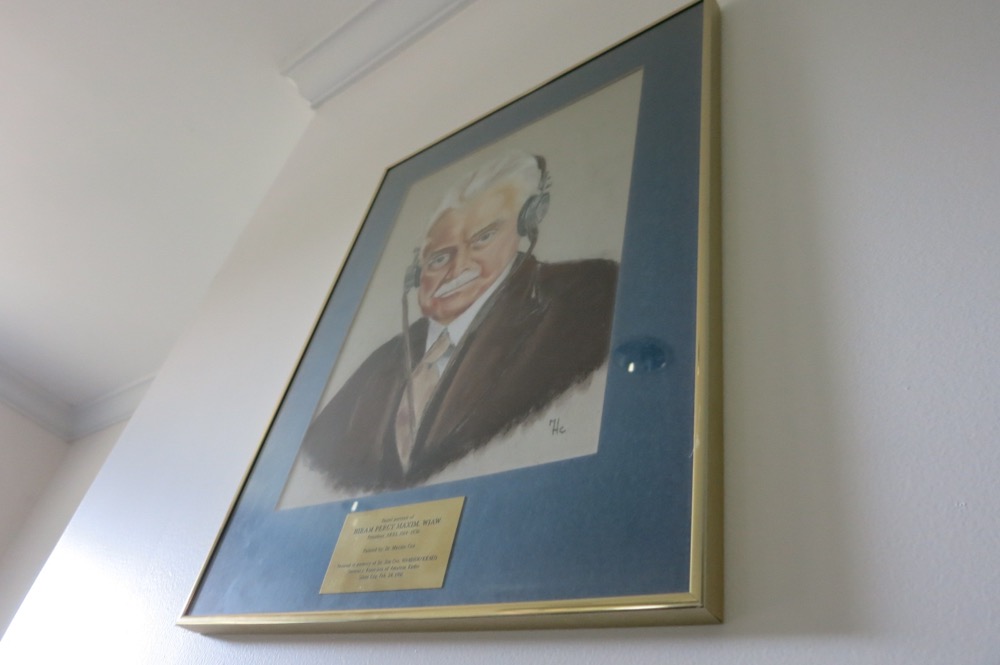 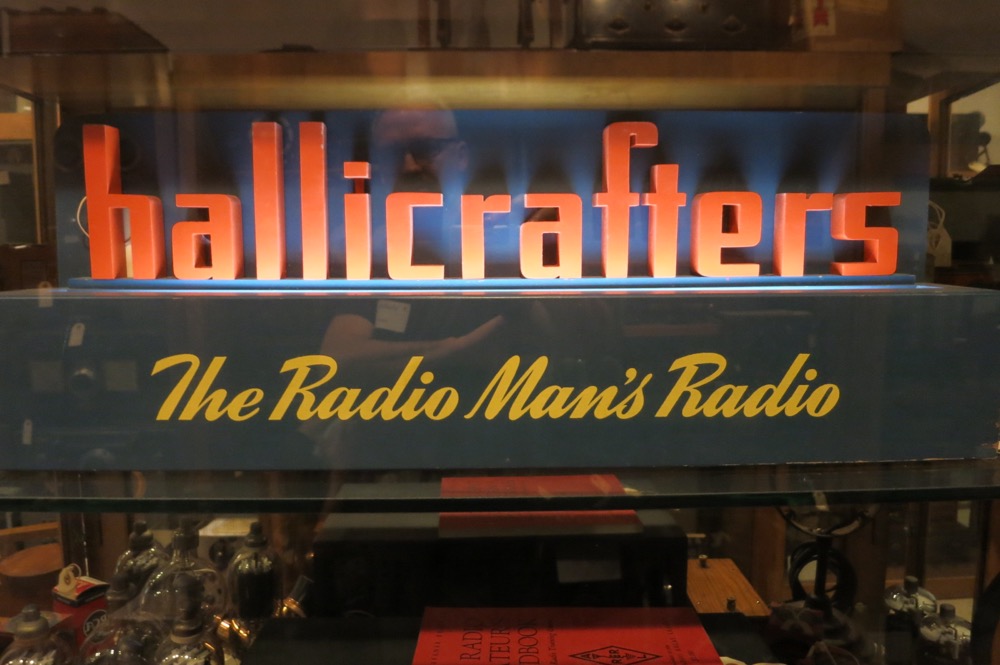 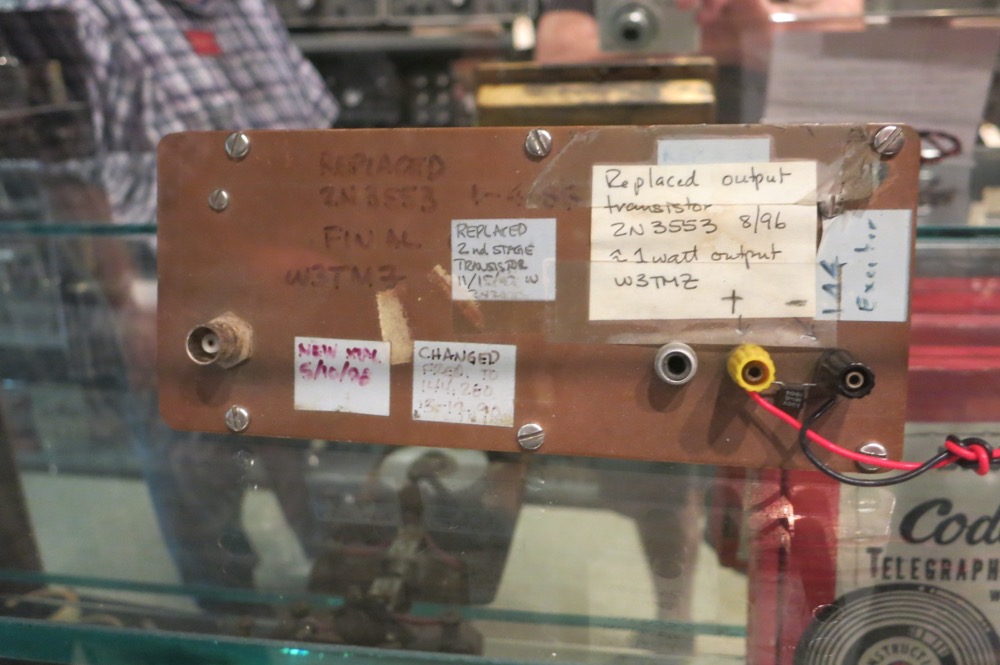 So, in a sense, the whole joint is a museum. The entry foyer contains artifacts of early W1AW history. There’s an early post-World War II 80-meter 1 kW transmitter and “Old Betsy,” a rotary spark gap transmitter that once belonged to “The Old Man” Maxim himself, and was installed at his Hartford residence.

There is another display case housing many early radio components, including a section of a telephone pole that once supported the huge rhombic that filled the space behind W1AW–the space now occupied by the ARRL Headquarters building. Yeah, I don’t know what a rhombic is either. But there’s an old roll-top desk here of Maxim’s too. I know what a desk is.

There’s an exhibit called “The ARRL Evolution of Amateur Radio Exhibit” that features radio apparatus from the early 1900’s to the 1980’s. The exhibit is housed in the Laboratory room, which was a place that the amateur operators would test new and experimental equipment in back in the day. 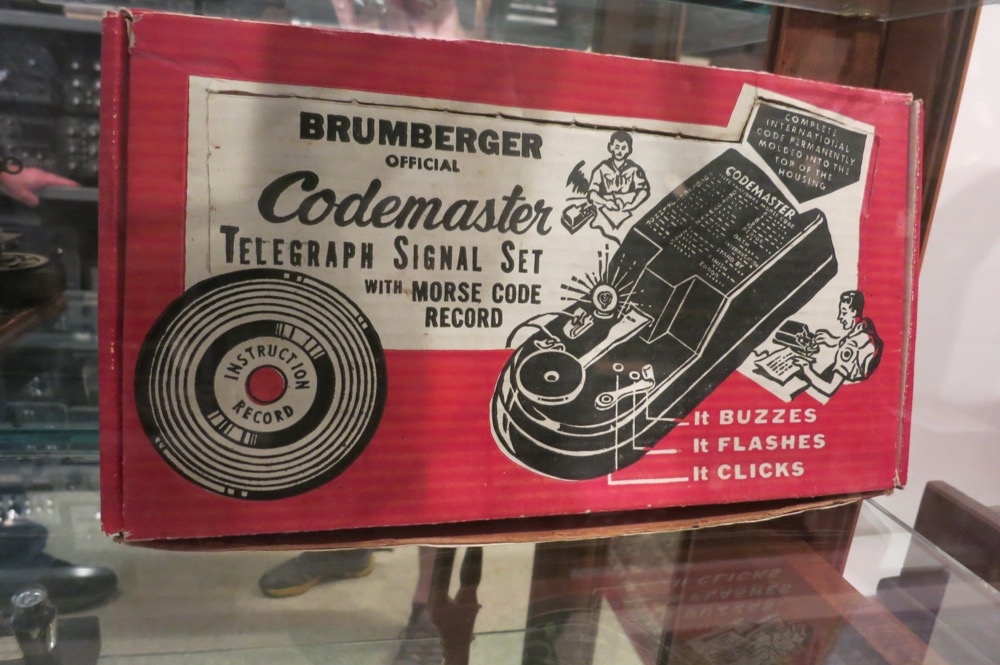 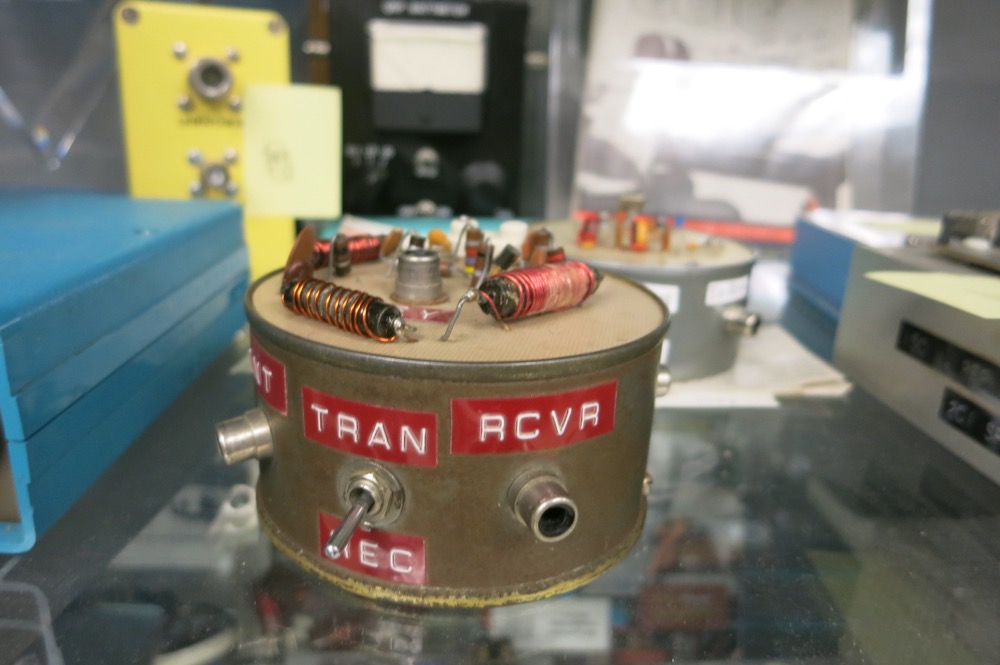 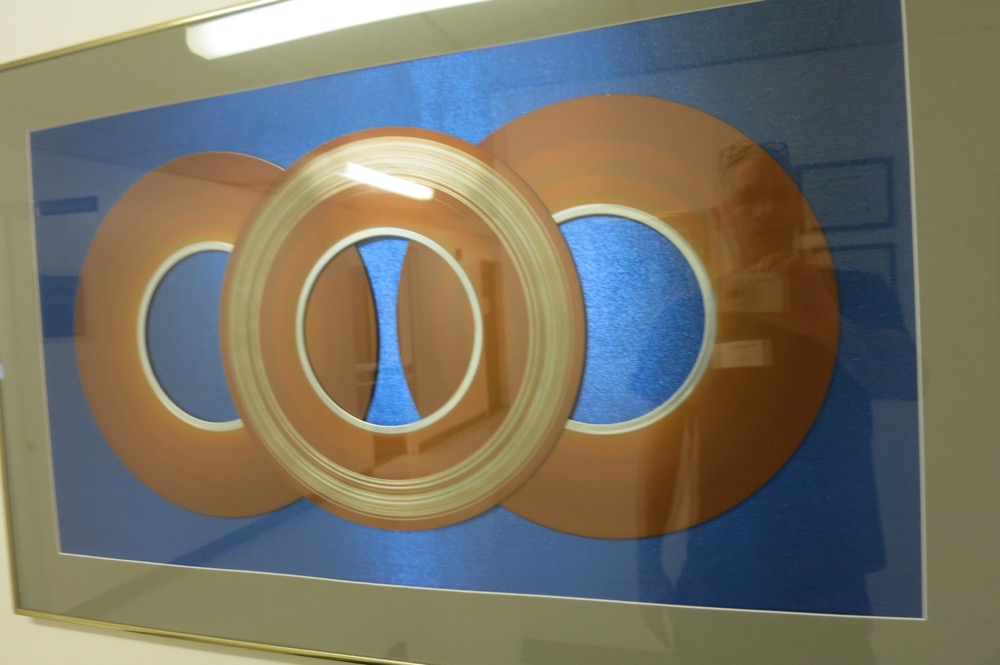 Volunteers have cataloged the hardware collection here, which is extensive. Only a part of it can be displayed at a time. Occasionally, there will be special pieces rotated into the display. Licensed visitors are welcome to sit down and operate at one of the three operating positions too, which is pretty cool.

An operating console in the center of the main room coordinates transmissions—CW, digital, SSB, and AM on 40 meters–to all of the W1AW bulletin exciters and amplifiers. These transmit W1AW bulletins and Morse code practice on seven HF bands, as well as 6 and 2 meters, simultaneously.

Voice bulletins are read live. An AMR 64 audio mixer sends the signals to the transmitters. The console also houses a line-voltage and phase-angle monitor and a switchboard that allows the station operator to manually control keying functions and transmitter power output. A SDRPlay DuoRX, with homebrew monitor station, is used to monitor actual on-the-air transmissions.

Facing the console, housed in its own 8-foot-wide, floor-to-ceiling cabinet is the six-bay equipment rack housing a patch panel and all the bulletin transmitters. Tall sliding glass panels allow access to the equipment but also isolate the equipment from the main room.

Okay then. I’ll spare us all any more of that insider type of talk. And I don’t want to scare you away from here. It’s really quite interesting, and they have some truly historic items. It’s not everyday that you’re going to find a Superregenerative Squelch Oscillator from 1922. 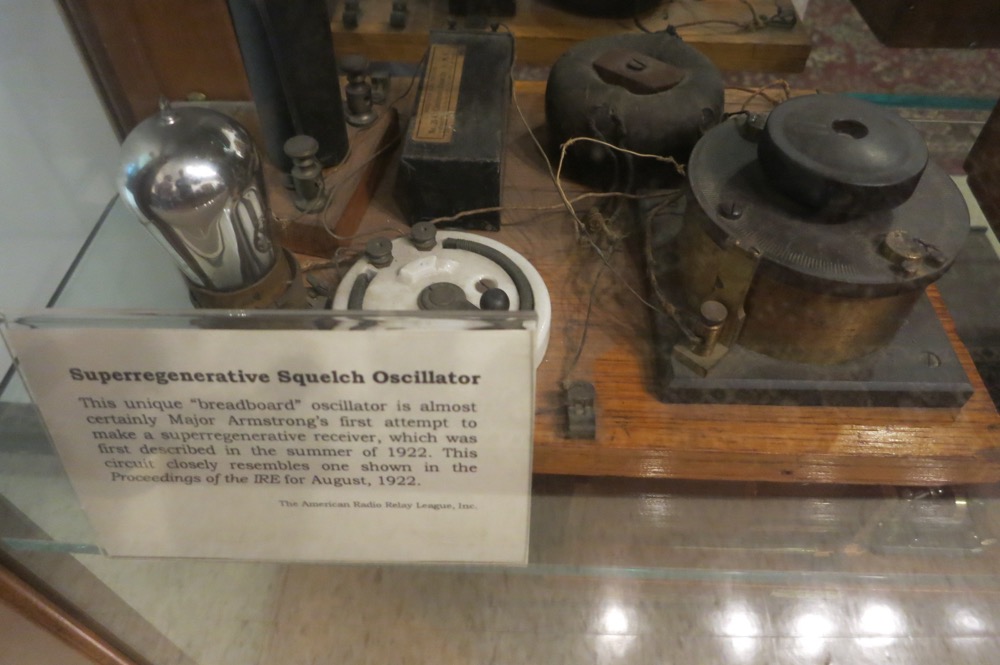 Just inside the front door, I noticed the equipment here used to operate EchoLink, as well as running a Winlink 2000 node. In addition to Winlink use, the Kenwood TS-480SAT is also used for MARS/SATERN operation. An Icom ID-1 23cm D-Star transceiver and Icom IC-2820 2m/70cm D-Star transceiver. I mean, I know you expected that and totally know what all that is, but I’m just trying to cover all bases. 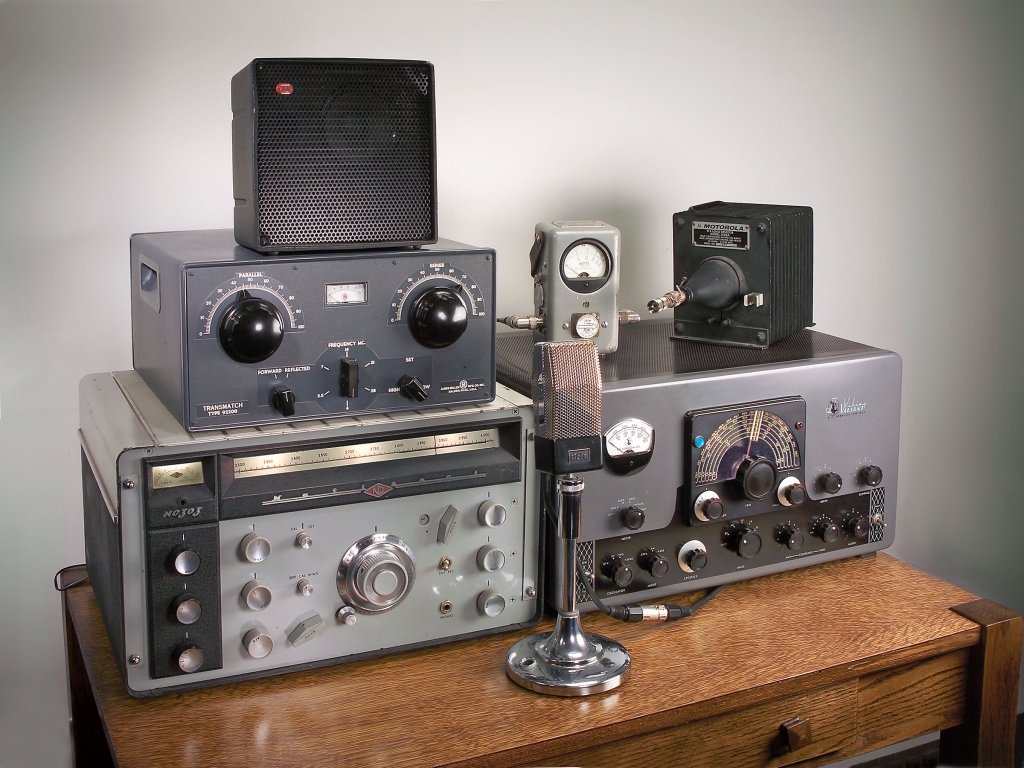 A few years ago, Joe Walsh WB6ACU, and avid AM’er, donated this Johnson Valiant transmitter and National NC-303 Receiver to W1AW. Yes, that Joe Walsh. The guy from The Eagles. Hotel California. That guy.

In fact, he’s visited Newington and has cut a dozen or so PSA’s for the ARRL and W1AW. He apparently loves ham radio and attributes his success to early fiddlings with amateur radios. For real. 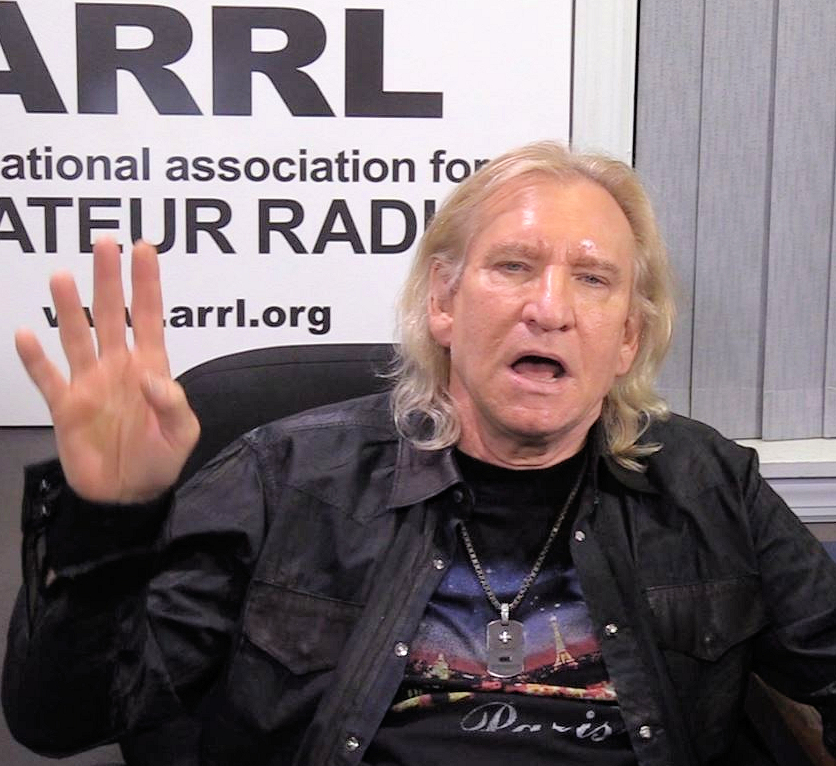 If you, like me, were wondering why it’s called the “Radio Relay League,” I actually do have the reason why. And it’s pretty cool. Back in the day, ol’ Hiram Percy Maxim was mad he couldn’t use his 1 kW radiowhatever to send a request for something available up in Springfield, MA. So he resorted to relaying the request via a ham in Windsor Locks, about halfway between.

That experience prompted Maxim to conclude that a national Amateur Radio organization could coordinate the relaying of messages, and thus greatly improve the distances hams could cover. The name for the new organization reflected this purpose–the American Radio Relay League. 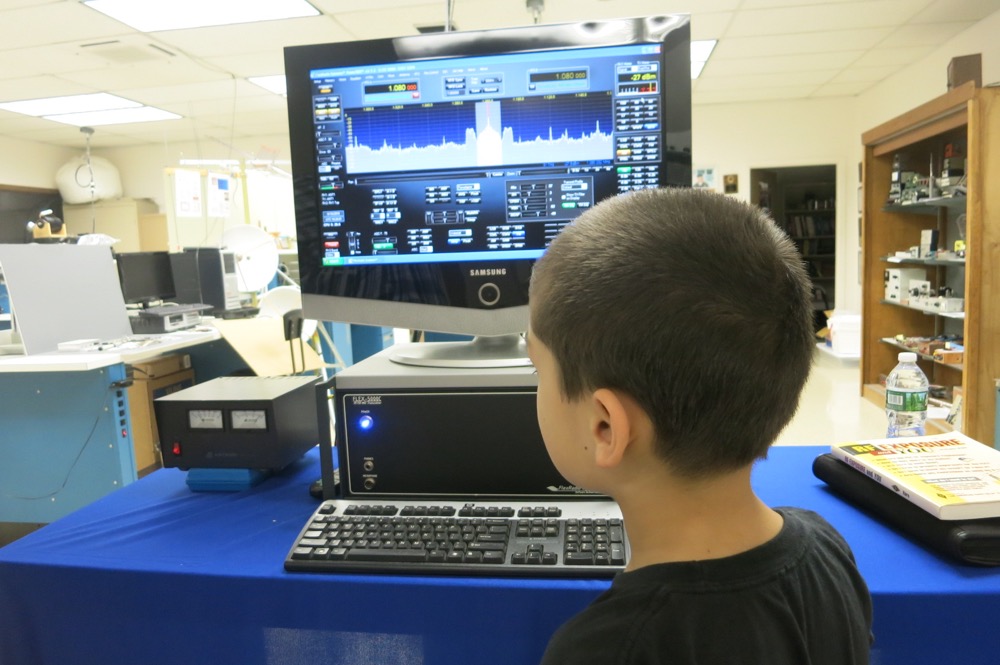 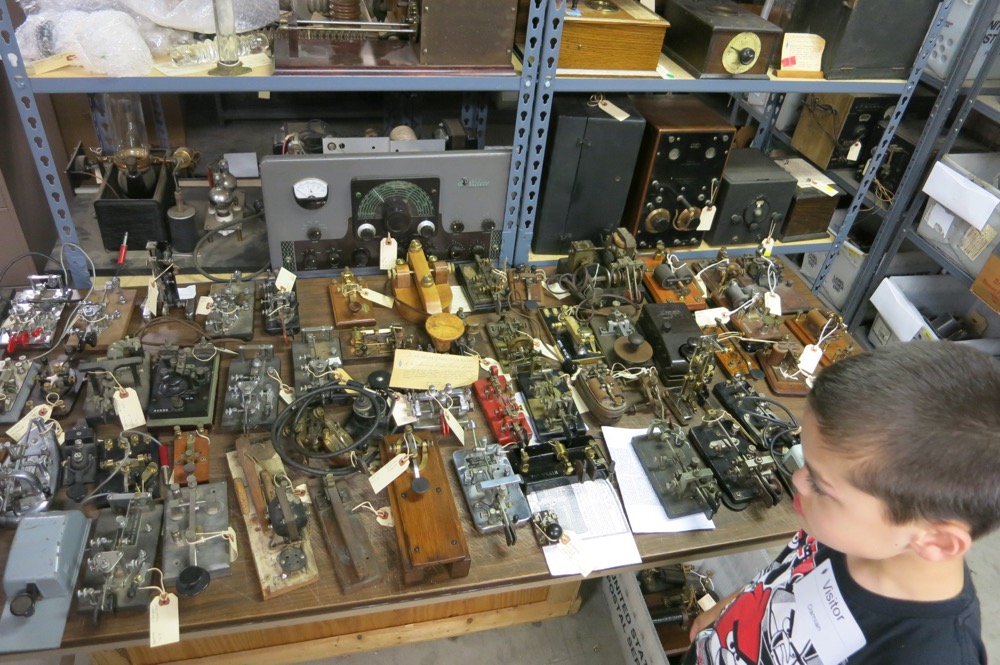 In December 1915, each member of the newly formed League received in his mail a 16-page magazine called QST–the “December Radio Relay Bulletin.” Its stated object was “to maintain the organization of the American Radio Relay League and to keep the amateur wireless operators of the country in constant touch with each other.”

Today, W1AW continues to provide the service that was the basis for the ARRL’s founding over a century ago. It’s all so clear to me now.

But if it’s not for you, their website provides the following: 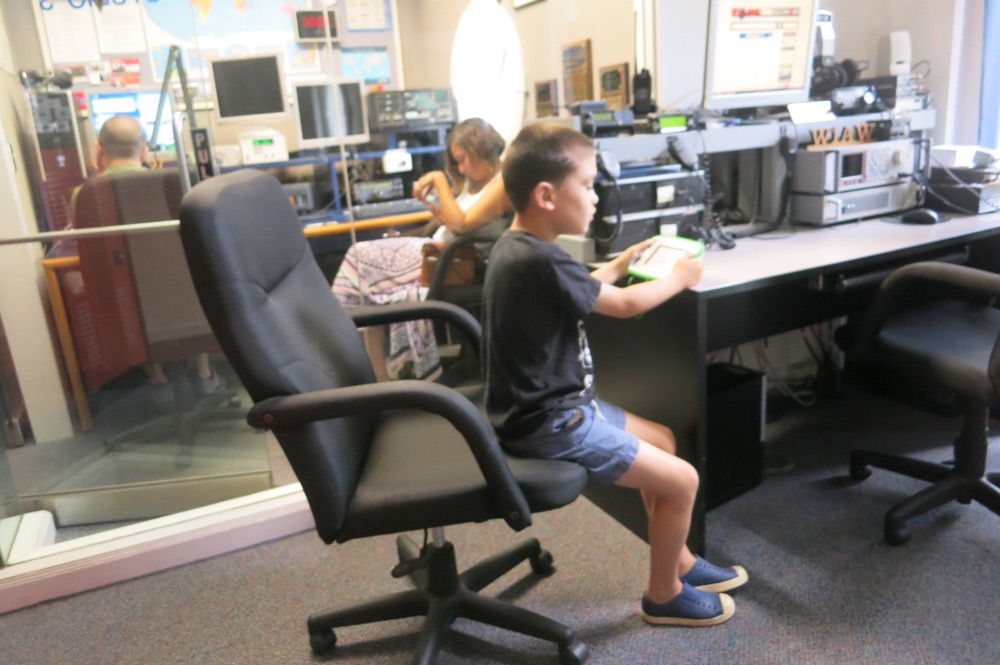 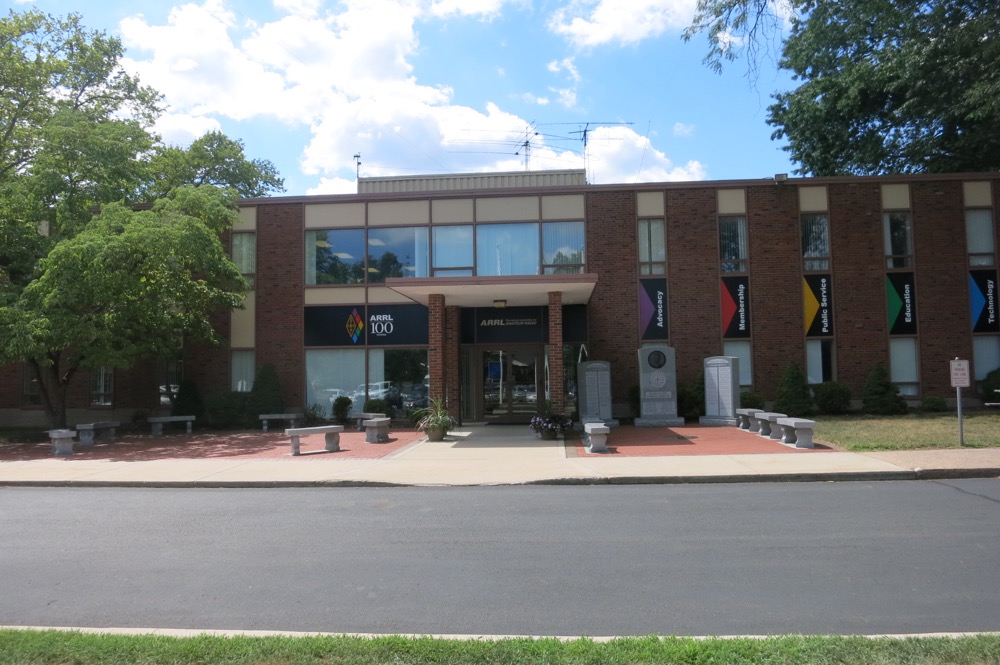