I can be moderately proud that I’ve written about many, many hundreds of things for this site that previously had no internet presence. Every so often, though, I’m tasked to write about something that has been described, poked, prodded, and probed dozens of times over many decades.

Or in the case of this book, centuries. 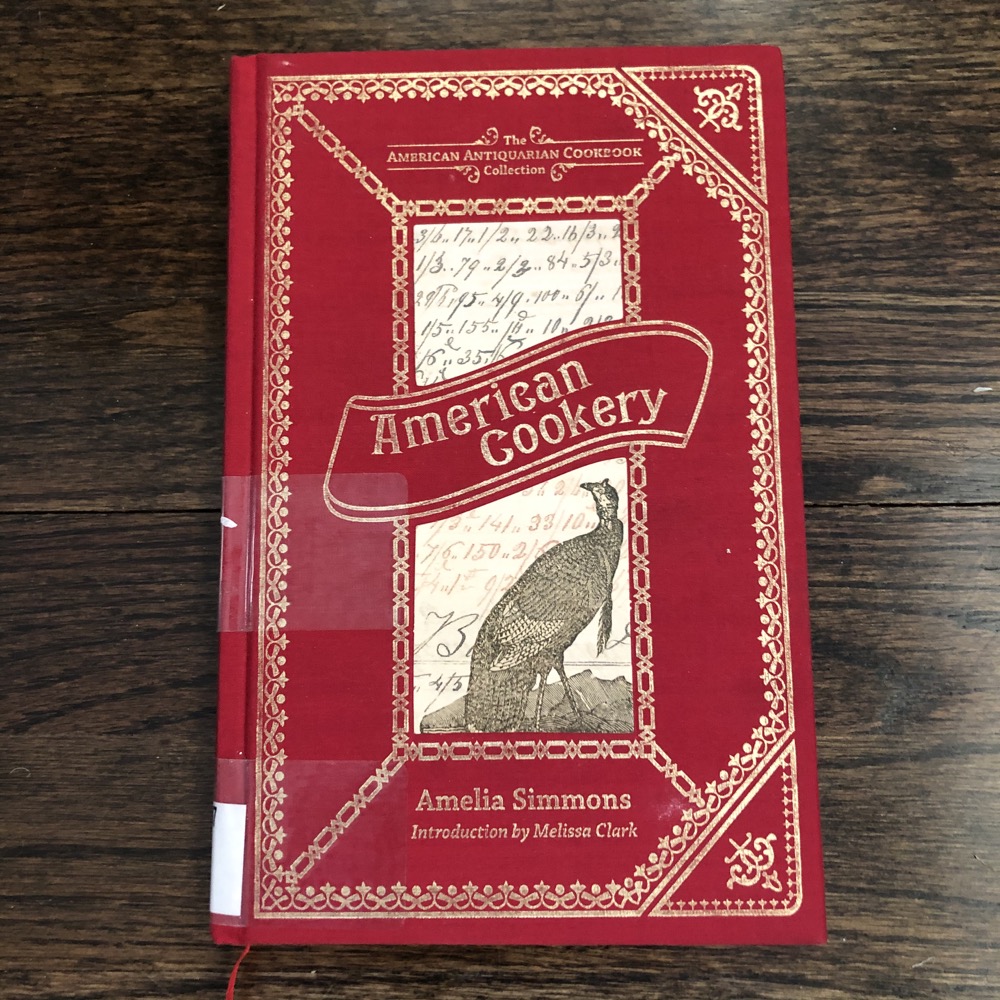 And knowing that, what is the point of providing the world my take? After all, what do I know about 18th-century nascent-Americana cookery that, say, Smithsonian Magazine doesn’t? (Hint: Nothing.) But forge ahead I must, for this is an important book; an American first from Hartford, Connecticut… and it’s downright fascinating to read.

Self-described uneducated orphan Amelia Simmons’s book’s full title is: American Cookery, or the art of dressing viands, fish, poultry, and vegetables, and the best modes of making pastes, puffs, pies, tarts, puddings, custards, and preserves, and all kinds of cakes, from the imperial plum to plain cake: Adapted to this country, and all grades of life.

Simmons used terms and ingredients known to Americans at the time – a time when the United States had just gained independence and was starting to shed some of its English roots. It was the first cookbook to include New England specialties such as Indian pudding, johnnycake, and to suggest serving cranberry with turkey. It introduced the use of pearlash, a precursor of baking soda, as a chemical leavener, starting a revolution in the making of American cakes. 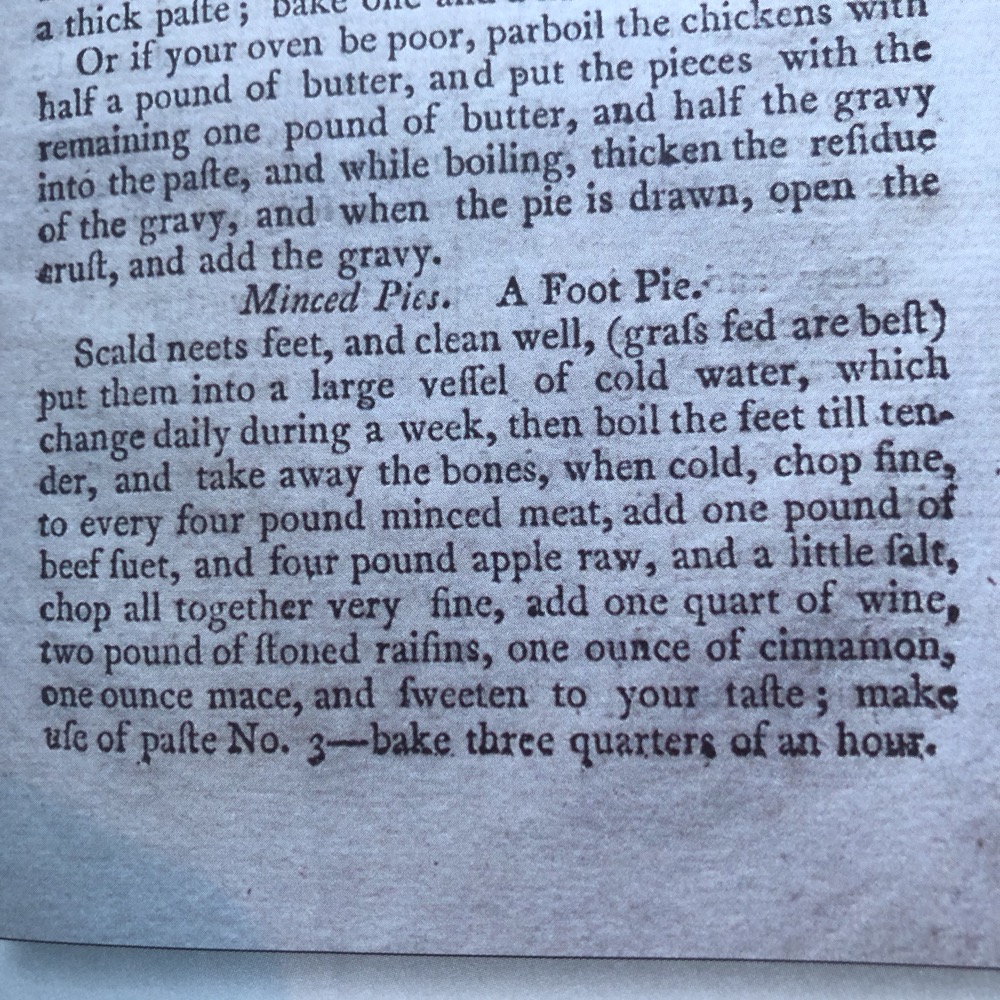 Some recipes have fallen out of favor

And as we all know, one of the very few things the US does better than the rest of the world is desserts. You scoff? Look at desserts as a whole. Sure, other cuisines have their hits, but if each country were to make, say, their 25 best desserts, America would win. This is a hill I’m willing to die on.

There are only four known first editions of the book in the world today. One is at the Library of Congress which declared it to be one of the “Books That Shaped America” – and one is at our very own Connecticut Historical Society Museum.

This first American-written cookbook published in the United States is not only a first in cookbook literature, but an historic document. It reveals the rich variety of food Colonial Americans enjoyed, their tastes, cooking and eating habits, even their colorful language. Author Amelia Simmons worked as a domestic in Colonial America and gathered her cookery expertize from first-hand experience. Amelia Simmons still holds her place as the mother of American cookery books. And no later work, however completely it may reflect the mores of this country, has quite the freshness of this first glimpse caught in the small mirror held up by an American Orphan.

Many cookbooks from the Old World had been published and were used in America, but again, American Cookery was a revelation because it incorporated New World ingredients. Said another historian:

The revolutionary and original aspects of her work lie in its recognition and use of truly American produce. There are five recipes using corn meal (corn is indigenous to America): three for Indian Pudding, one for Johnny or Hoe Cake and one for Indian Slapjacks.

Perhaps the most far-reaching innovation was the introduction of pearlash, a well-known staple in the colonial American household, as a chemical leavening in doughs. This practice eventually led to the compounding of modern baking powders… Thus, twenty years after the political upheaval of the American Revolution of 1776, a second revolution – a culinary revolution – occurred with the publication of a cookbook by an American for Americans.

The book covers the full meal experience from vegetables and herbs one of my favorite passages is “Garlicks, tho’ used by the French, are better adapted to the use of medicine than cookery” – to meats, filling starches, and of course cakes and pies. There’s even a recipe for beer! Sure, there are recipes for chicken and turkey and one or two for beer and pork, but the longest and most floridly described dish in the entire book is for turtle. 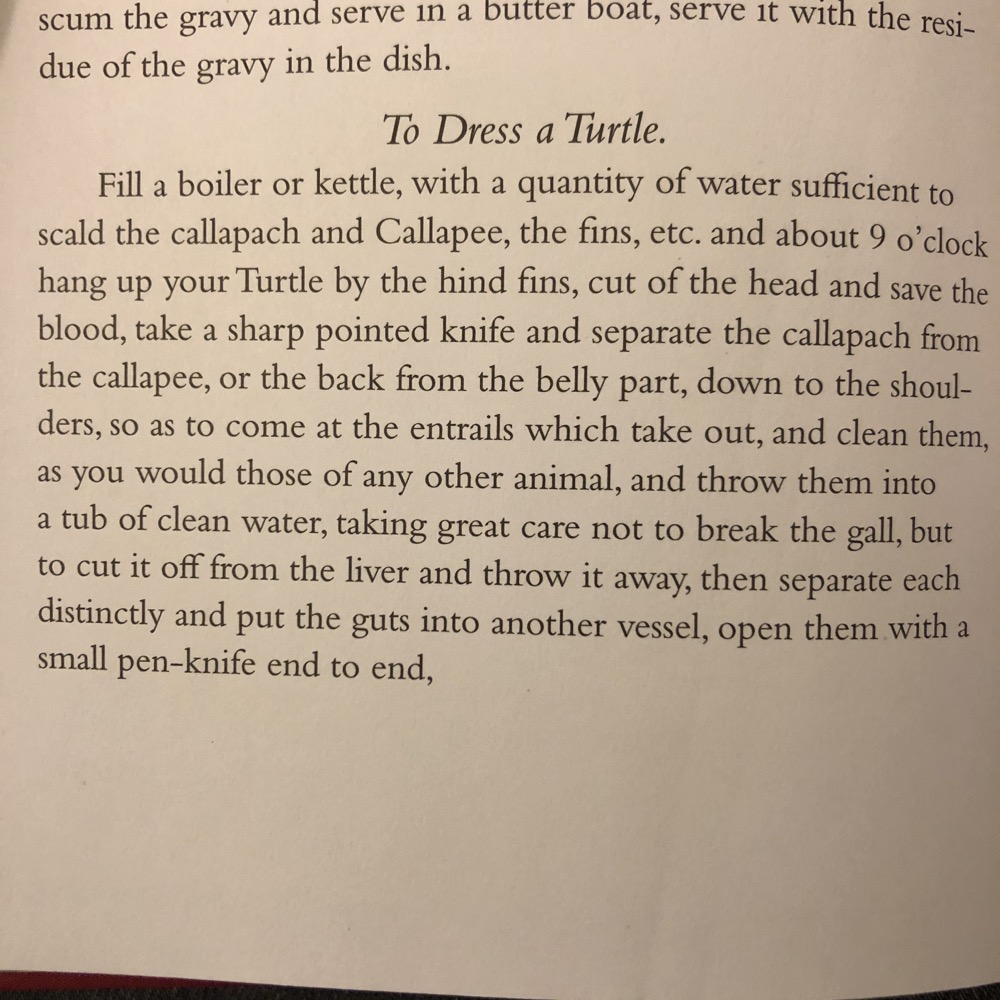 It goes on for another full page and a half. While turtle meat has all but disappeared in American cuisine, it was hugely popular a couple centuries ago. And like all popular animal dishes, we ate too much of it and killed off too many animals. I have no idea which turtle this recipe describes though, and am only familiar with snapping turtle as food.

It must be noted that the cakes section is both humble (hoe cakes) and highly aspirational. The recipe for “Queen’s Cake” involves butter whipped to a cream, a pound of sugar, a pound and a quarter of flour, 10 eggs, glass of wine, half-teacup of delicate-flavored rosewater, and spices. And “Plumb Cake” offered the striving housewife a huge 21-egg showstopper, full of expensive dried and candied fruit, nuts, spices, wine, and cream.

I was able to borrow a recently reprinted version that transcribes scanned photos of the original, page by page and there is a glossary to help with some of the antiquated terms. It’s great that this humble woman, from a humble background, was able to make money off of her cookbook and that it is recognized for its important today, 250 years later.