Cat Rocks Cave isn’t a real cave. There are no real caves in Union, Connecticut. In fact, there are only maybe two real caves in the whole state. So what does our little state do? We call everything that could be vaguely imagined to be a cave… a cave.

Welcome to Cat Rocks Cave… wherever it may be. 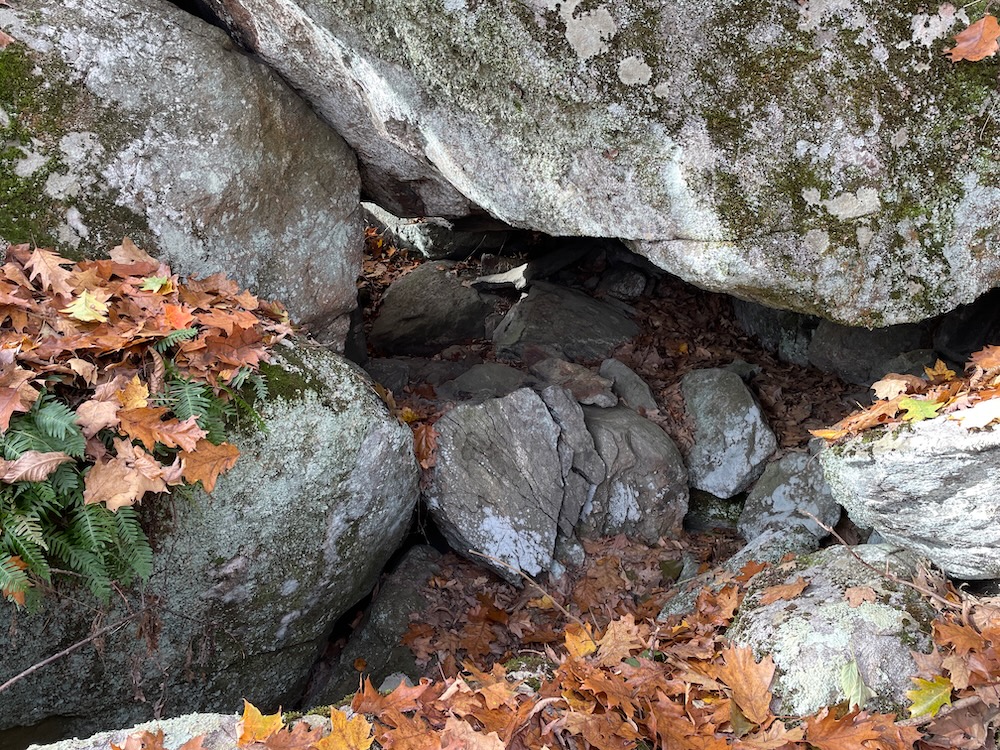 What matters here is that if you are capable, you really should make the trek in your car to Union and then make the trek to Cat Rocks and the impressive jumble of boulders that comprise the “cave(s)”. Bigelow Hollow State Park is in my top 10 Connecticut state parks, as it is as beautiful and as primeval as you’re going to get east of the Connecticut River in our state. There are several trails of varying length and difficulty, so you can choose your own adventure.

To reach the Cat Rocks area, you must hike north to the tippy top of Breakneck Pond and the Massachusetts border. If you are young and fit, you can do this any way you wish. If you are not so young and/or not so fit, but want to complete a loop, I’d suggest taking the Ridge Trail north and return via one of the lakeside trails. Note: The Ridge Trail from Breakneck Pond to the top of Cat Rocks is steep. 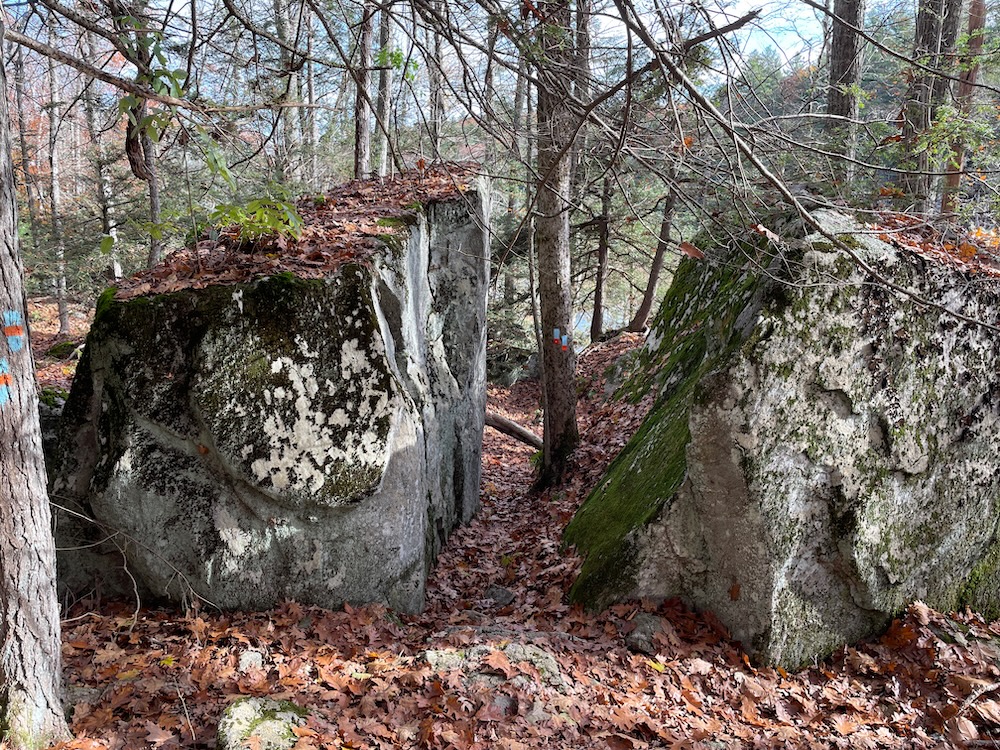 Okay. Cat Rocks. They’re cool. They received their name because in the olden days, the acres of massive hillside boulders and cliffs were home to man-eating cats in its caves and crevasses.

“Immense masses of rock as large as a house are piled over each other promiscuously, as if by some terrible convulsion of nature,” wrote the Rev. Charles Hammond in his 1893 history of Union. “There are many caves underneath these rocks. . . . It would be a magnificent place to play hide and seek, or for a person to hide from pursuers.”

Cat Rocks, he went on, “are so named from the wildcats which lived there until quite recent times.” 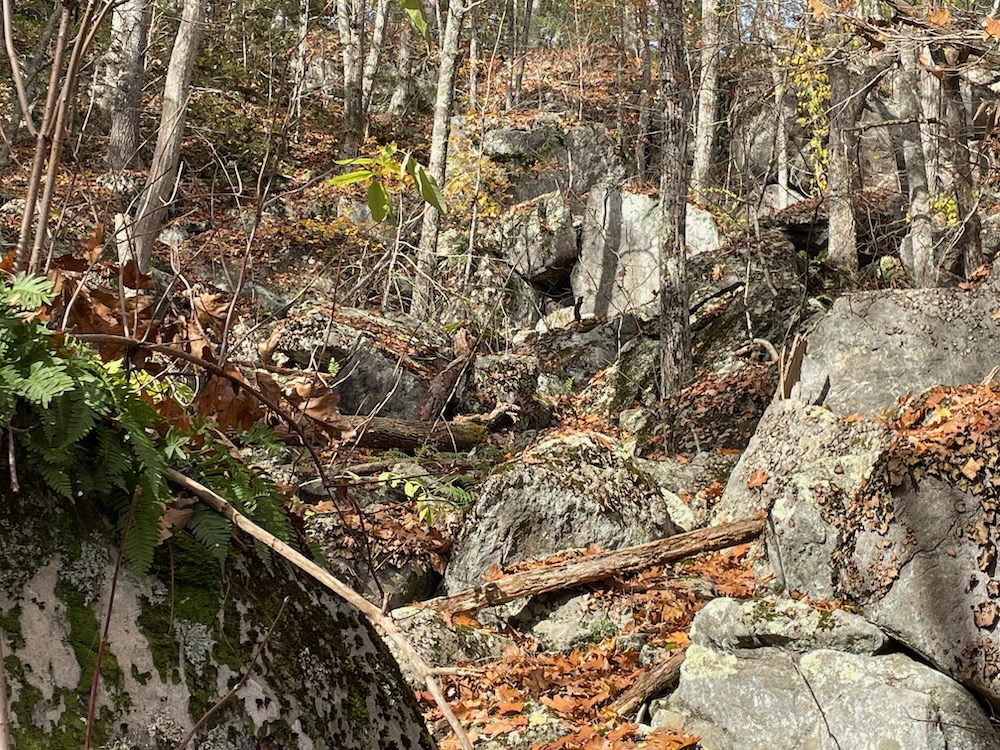 Everything I can find about Cat Rocks references bobcats. I find that odd, knowing that Catamounts (panthers) lived in New England in the 19th century, and with this part of the state as remote as it is in 2022, I imagine it was nearly inaccessible in, say, 1893 or 1793. And climbing up the steep hillside to explore all the caves and dens and boulders is still pretty darn difficult.

I went off-trail a bit to poke around some of the “caveyest caves.” There are many that provide really good cover and shelter, but you’d nearly break your neck getting in and out of them. (And yes, Breakneck Pond below supposedly got its name from some local landowner a hundred or more years ago who fell off some cliffs here and broke his neck.) 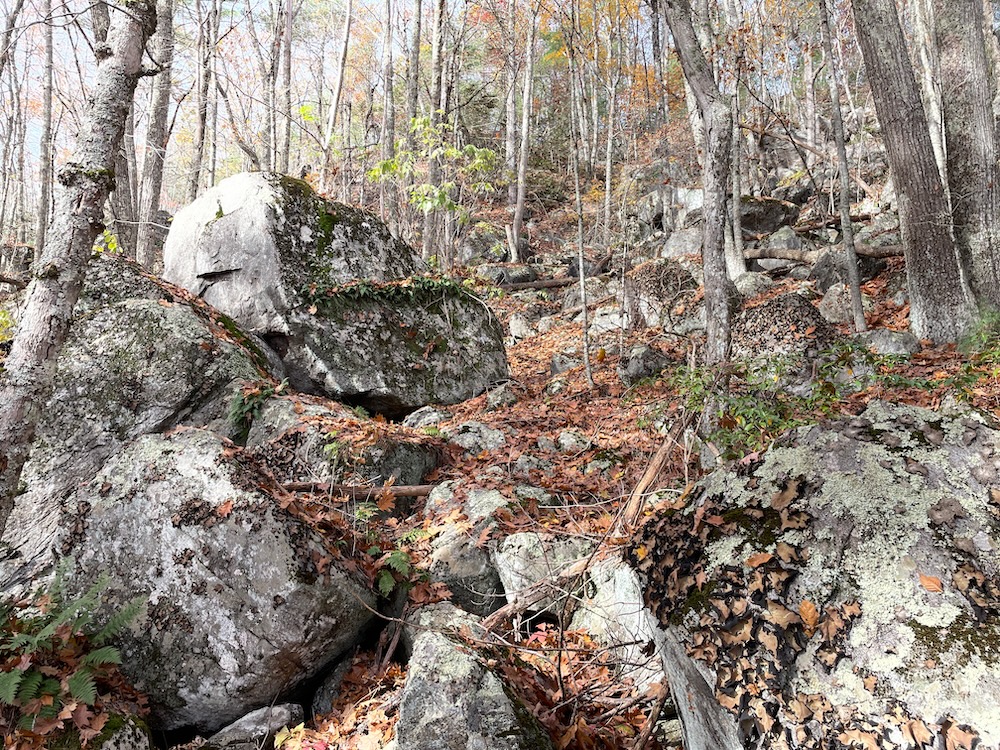 The Ridge Trail bobs and weaves near a bunch of these massive boulders and goes through a cleaved one at one point. This is the part of the state where people get lost for days – it’s what makes it so attractive to me, but also so sketchy to others.

I started seeking out Connecticut’s caves and dens over a decade ago, and once I start a list I intend to finish it. I have no idea if there’s actually one official Cat Rocks Cave, but honestly, I don’t care – especially if it’s under a cliff up on the ridge. Take your pick of all of them and crawl around and relax – you’ve earned it if you hiked up here. 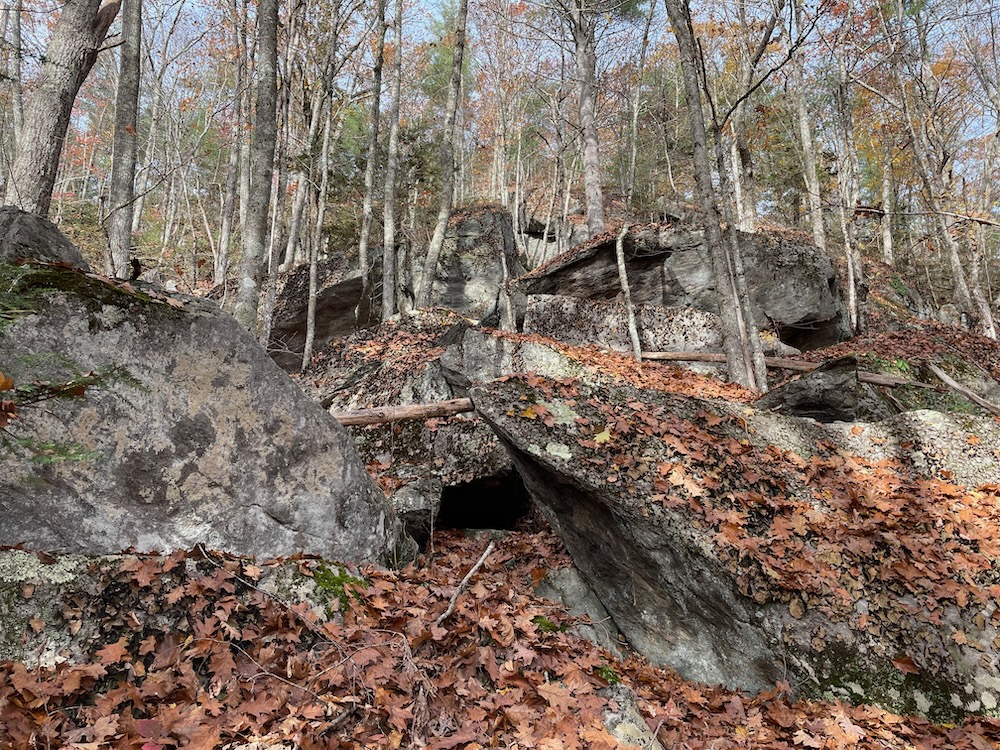