This museum is located in one of those awesome areas in Connecticut where an invested person could spend a lot of time. Edgerton Park, all the East Rock Trails, East Rock Brewing… Yale is just a few blocks south. Of course the people who live on the Hamden/New Haven line probably view it as just another boring part of the state. Such is life. 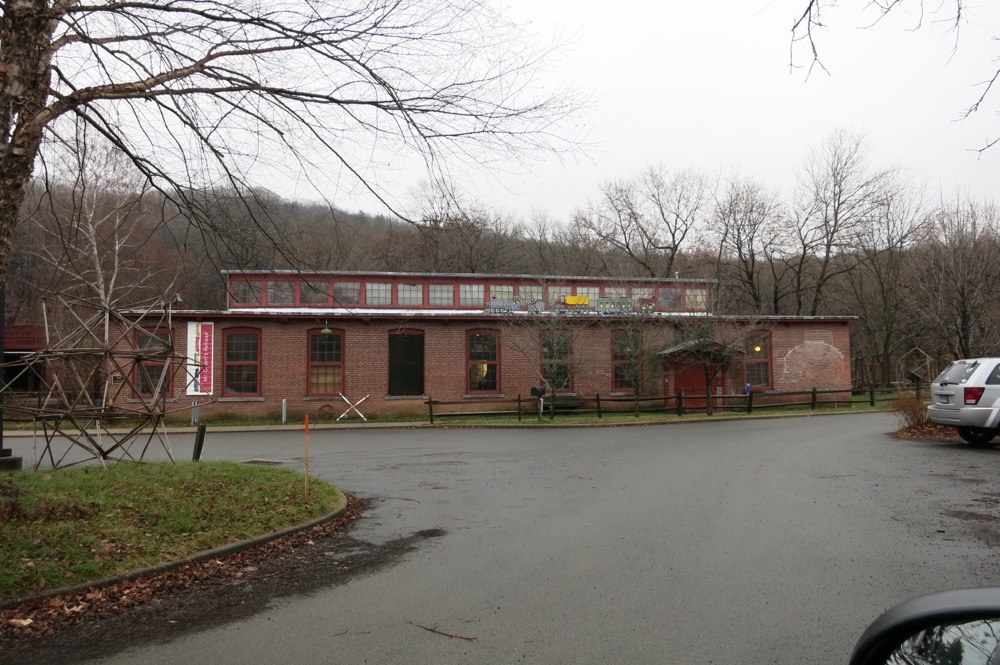 And even back in the day when this was Whitneyville and was a manufacturing hotbed, those residents likely said the same thing. Such was life. Whitneyville was named after famed inventor and businessman Eli Whitney. The museum is a bit of a confused – but really cool – mishmash of industrial history and local history with a bunch of inventions, toys, and a model train display. It’s also a place for kids to come and learn and create and attend workshops – in fact, its official name is the Eli Whitney Museum & Workshop.

Originally, the draw to the area was the Mill River, which flows through the old Whitney Armory site is on its way to Long Island Sound. Eli Whitney, Sr. came to the site in 1798 specifically to use the water’s power for running machinery; sixty-two years later his son turned the river into the first public water supply for the city of New Haven. For some decades thereafter, the river continued to provide power not only for Whitney’s Armory’s machinery, but also for pumping its own water into the network of pipes reaching New Haven’s buildings and hydrants. Eventually it gave way, as a power source, to steam engines and electric motors, but it continues to this day to supply water for the city. 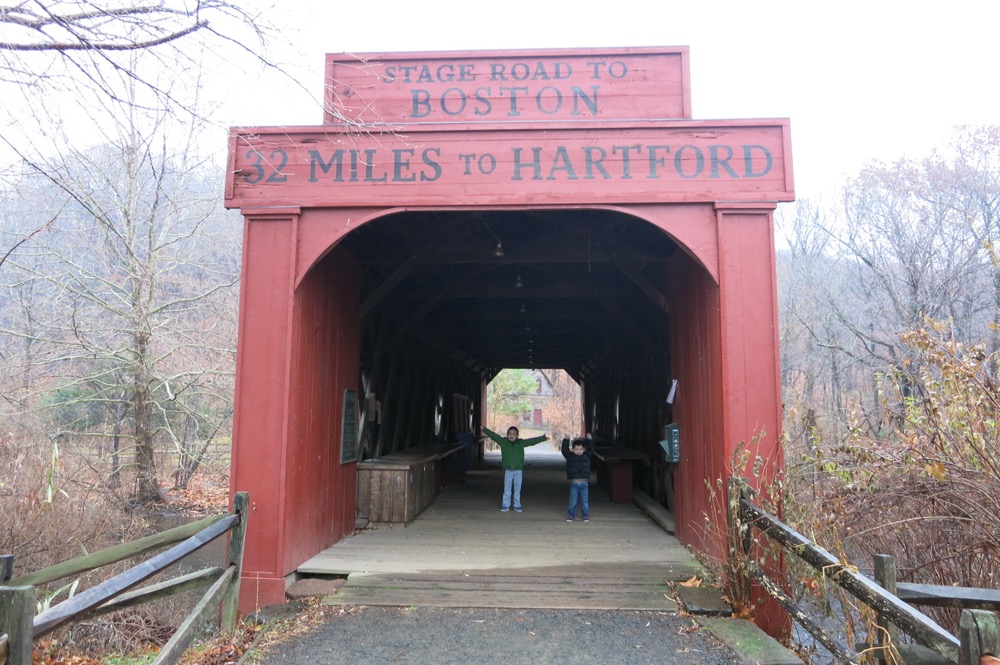 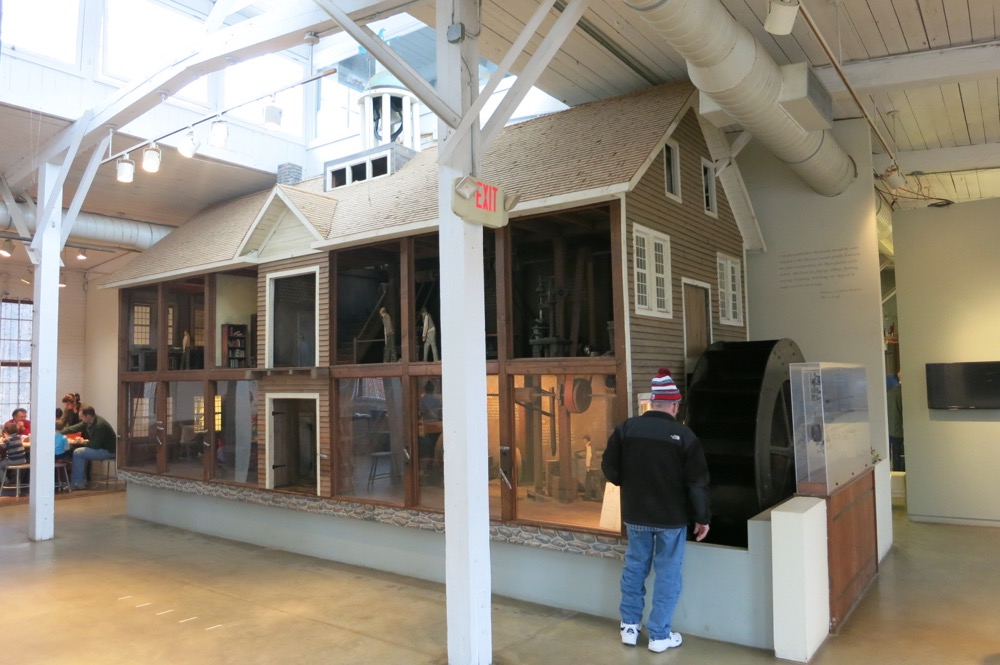 The Whitney creativity gene was strong. Old Man Eli built up the dam to create what is now Lake Whitney in Hamden. This was to supply water and power to the mills and such, but there was another purpose in doing this as well. The creation of Lake Whitney prevented further industrial development at waterpower sites upstream – by flooding them – thus leaving the Armory as southern Hamden’s only industrial site for a long, long time. Make money from the water supply to New Haven, power your factories, and drown out the competition all at once? Brilliant.

At least 18 buildings have come and gone since Whitney Sr’s time. When Eli Whitney made his plans to supply the government with muskets, water power and machines were two of his immediate concerns. He also wanted a “sober” and reliable workforce, so he sought people with families and brought them to what would become Whitneyville. He built them houses and provided everything they’d need to live and work – and not seek other employment. 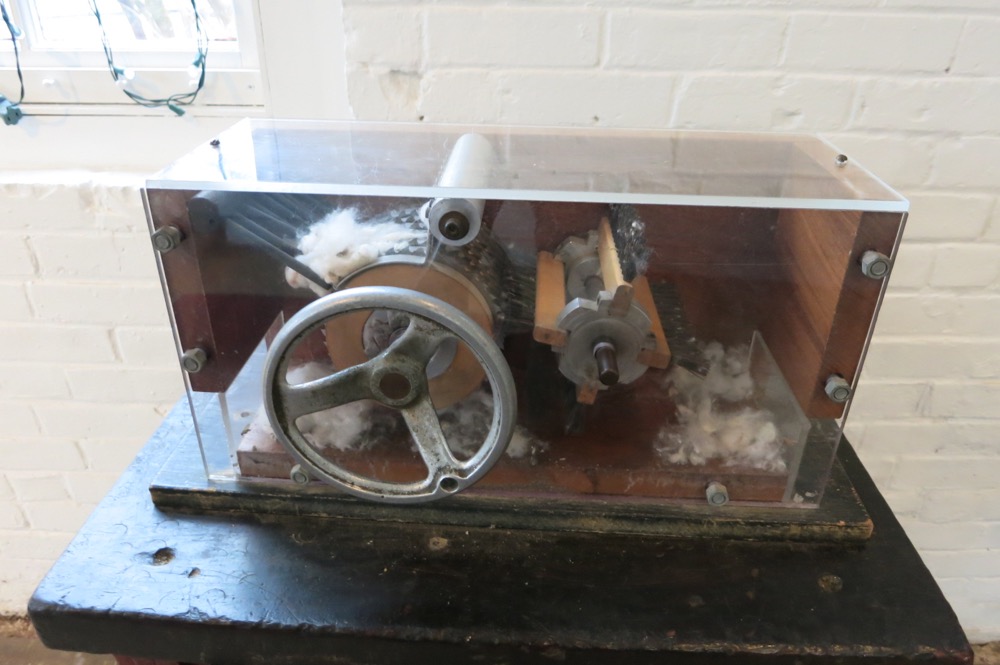 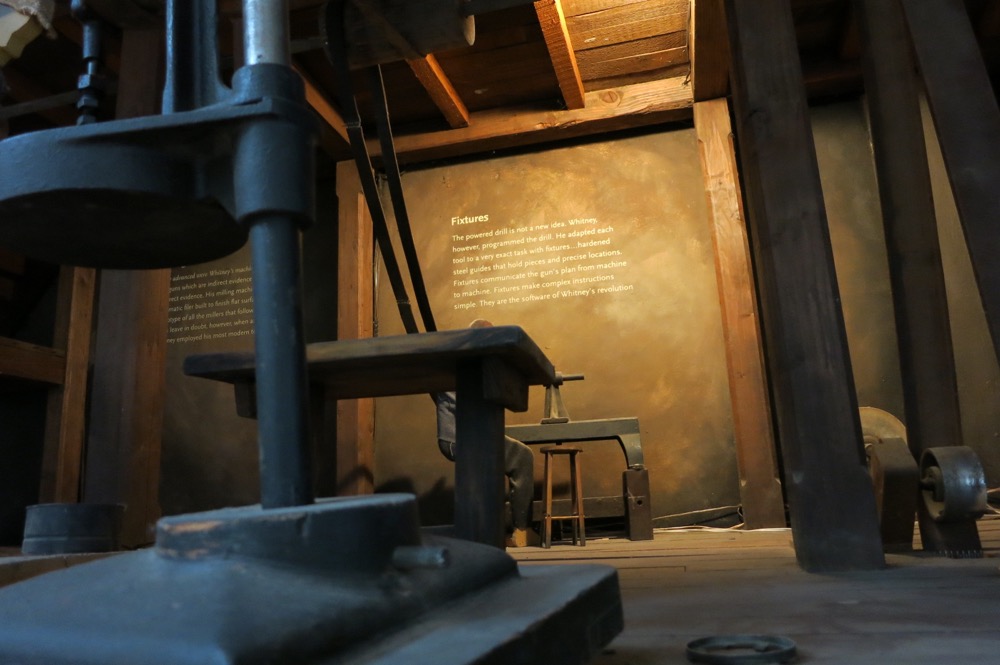 Whitney innovated a lot of this sort of arrangement; he built barns and had a sustenance farm around the workers’ housing. He attracted the attention of Yale professors down the street (what is now Whitney Avenue) who marveled at his ingenuity. The famed architect Ithiel Town bounced ideas for bridge design off of Whitney and was granted permission to build his lattice truss bridge at the Armory; more as an experiment than anything else. Here’s my page on the covered bridge that’s still here.

The lattice truss became the standard design of many bridges for the next hundred years. I know, I know, we’re not even inside this place yet. But Eli Whitney, Jr. was a fascinating guy. Everyone knows he invented the cotton gin, which led to a massive boom in cotton production in the American South. 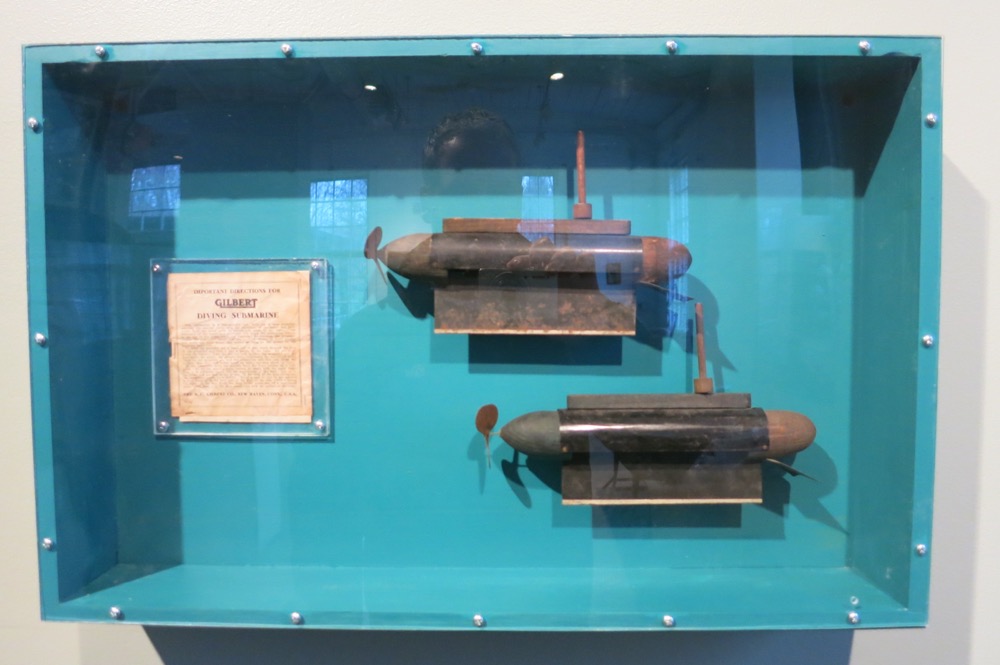 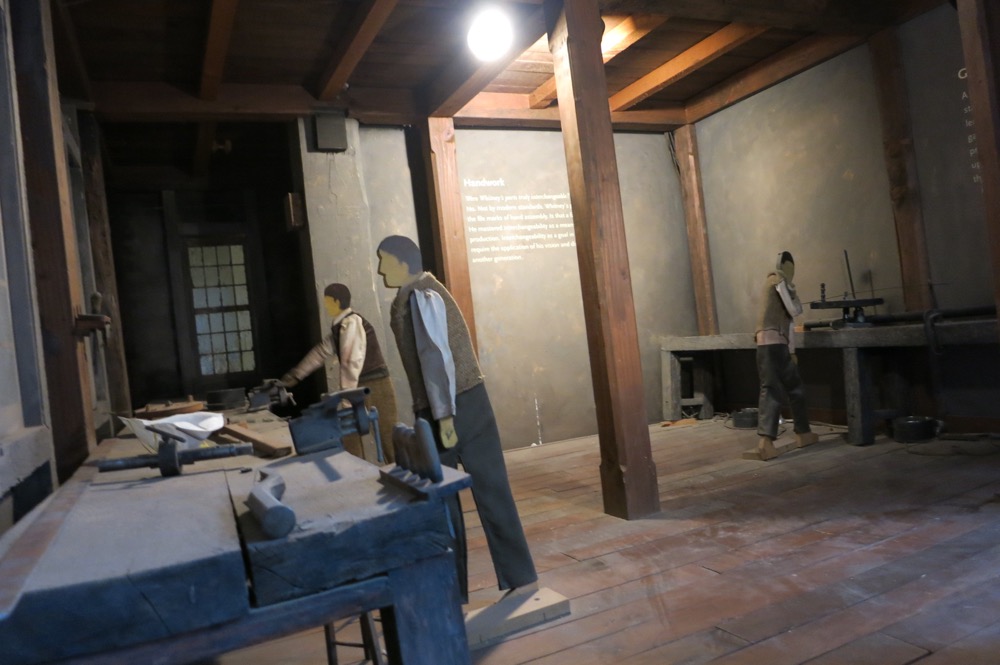 Which led to a boom in slavery. Which wasn’t good. Whitney didn’t make any money from his invention at all after creating a working model of it in nine days while visiting a plantation in South Carolina merely to fill some time. That invention – that was easily replicated and copied by every mill operator up and down the east coast – changed the world. Whitney, a Yale graduate, left the south and was intent on reinventing himself in Connecticut at his dad’s property.

In 1798, Whitney signed a bold contract with a government headed by still familiar names: Adams was President, Hamilton, Secretary of the Treasury, Thomas Jefferson, Secretary of State. Whitney promised to produce 10,000 muskets in just two years. It was the largest contract with a private armory that our young nation had ever written. 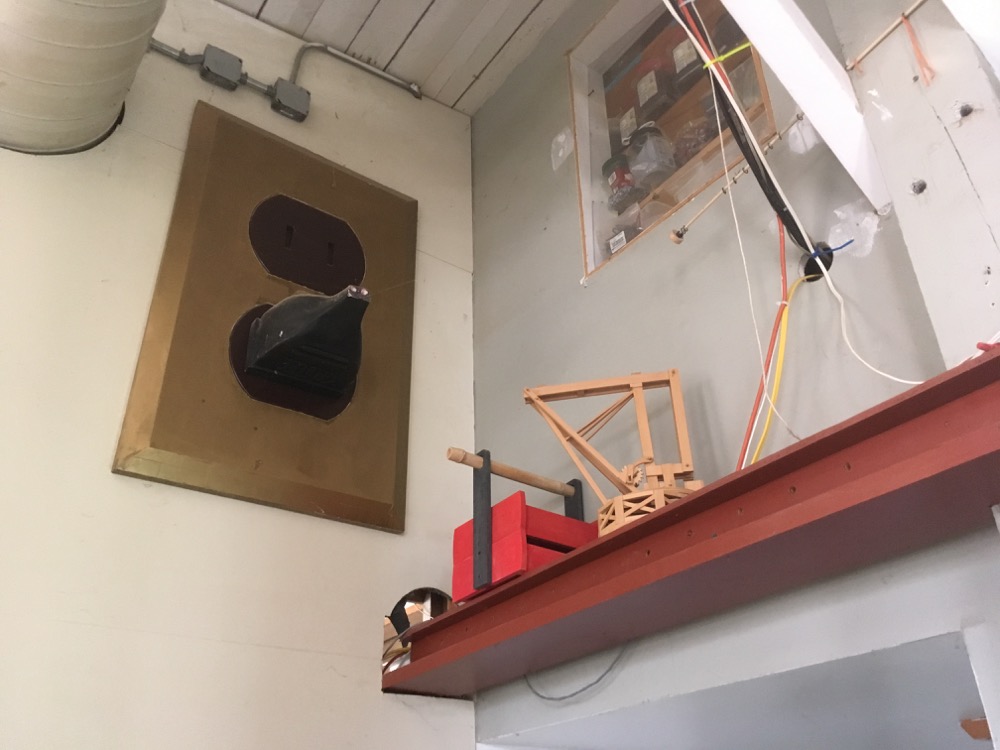 This was sort of like the space race. No way could Whitney produce that many guns in a year, but the US government was funding and promoting change and growth more than anything. Whitney studied the very few interchangeable parts factories in Europe and set about improving the whole methodology. He would invent machines that machined. His focus was limiting the need for specialized skillsets and limiting the chance of flaws. 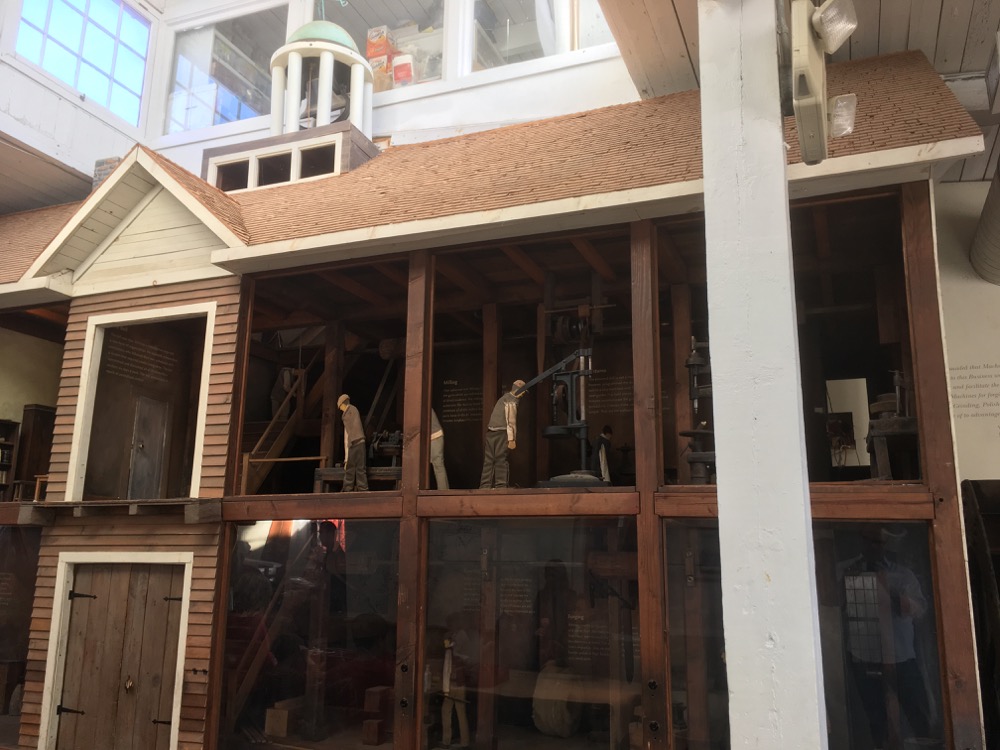 There’s a lot more to Whitney than I can write here. He collaborated with James Hillhouse, Daggett and Farnum to promote banking and development. He supported the nascent Farmington Canal and the Law School in Litchfield. He encouraged the gifted architect Ithiel Towne to market a new design for bridge construction as I mentioned. He participated in founding the Connecticut Academy of Arts and Sciences at Yale… the nation’s oldest continuously active learned society. And when he had an enlarged prostate, he invented a new catheter to provide himself some relief. His deathbed papers? New lock part designs that were used by the Yale Lock Company. 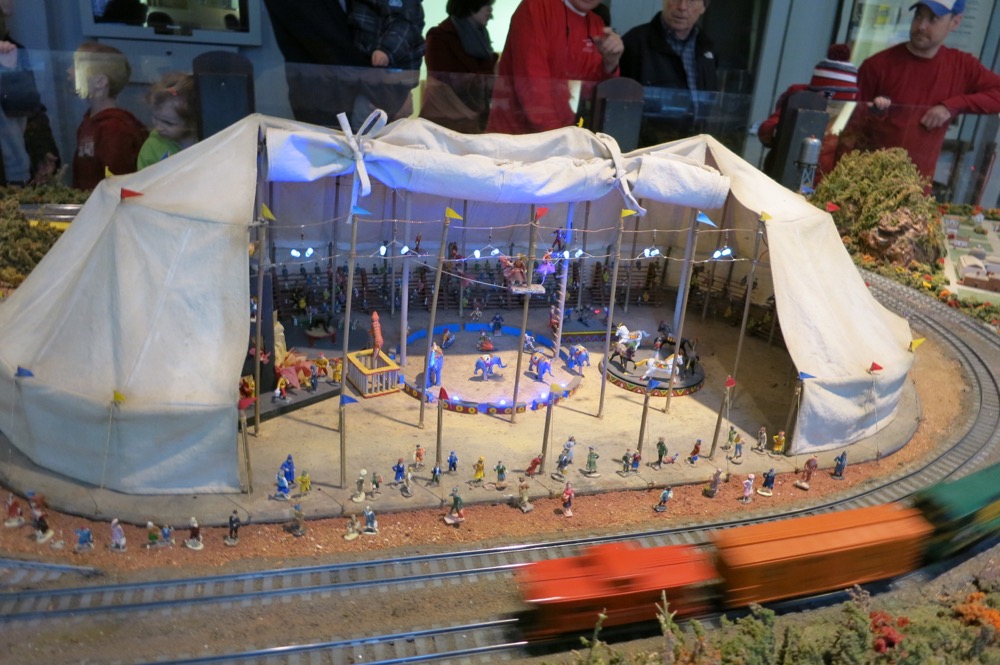 The Eli Whitney Museum and Workshop is an experimental learning workshop for students, teachers, and families. We collect, interpret, and teach experiments that are the roots of design and invention. 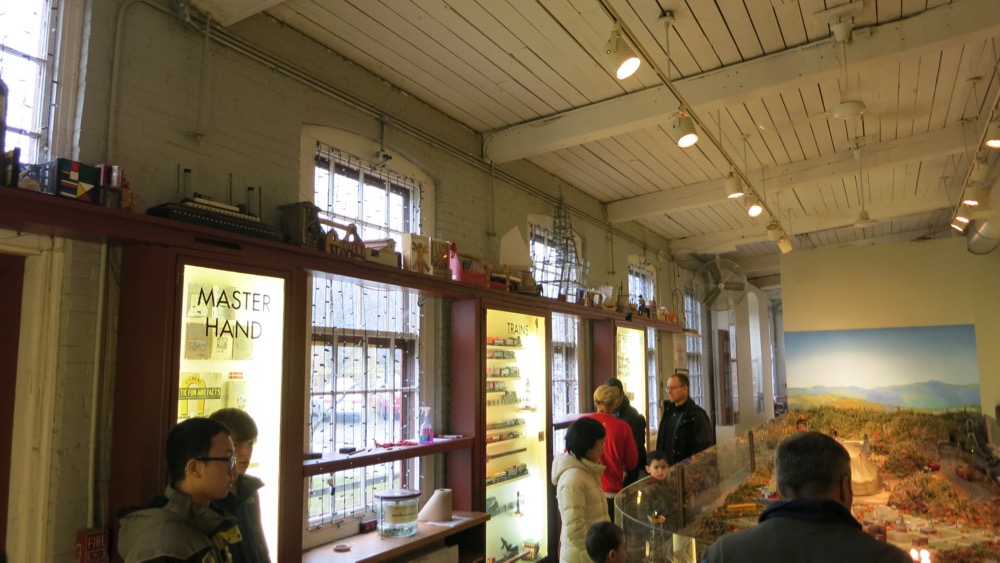 The first room attempts to explain Eli Whitney, his Whitneyville, his inventions, and his impact on the world. There is much tell to make it worthy of the man, but this is a process I understand. I’ve already said enough about all of that – while barely touching what Whitney meant from a historical perspective.

We visited twice during the American Flyer Trains winter display. The train layout here is pretty good, but there’s a historical component that makes it slightly different from some others around the state. And their inventor was certainly in the mold of Eli Whitney. Check this guy out:

Alfred Carlton Gilbert was drawn to New Haven by Yale, especially by Yale’s preeminence in sports and by New Haven’s lively vaudeville scene. Gilbert won a Gold Medal for pole vaulting in the 1908 Olympics. He earned living expenses performing magic on New Haven’s stages. He studied Medicine at Yale’s Sheffield Science School. His gift for magic led to a part time, then full time, partnership with John Petrie producing stage tricks for magicians in New Haven and New York. Riding a train to New York, Gilbert saw inspiration in the new bridges and towers. He sketched the nuts, bolts, and girders of a model steel construction system he would call the Erector Set. It caught the spirit of the age. With it, Gilbert built a company that shaped the imagination and invention of three generations of American boys. 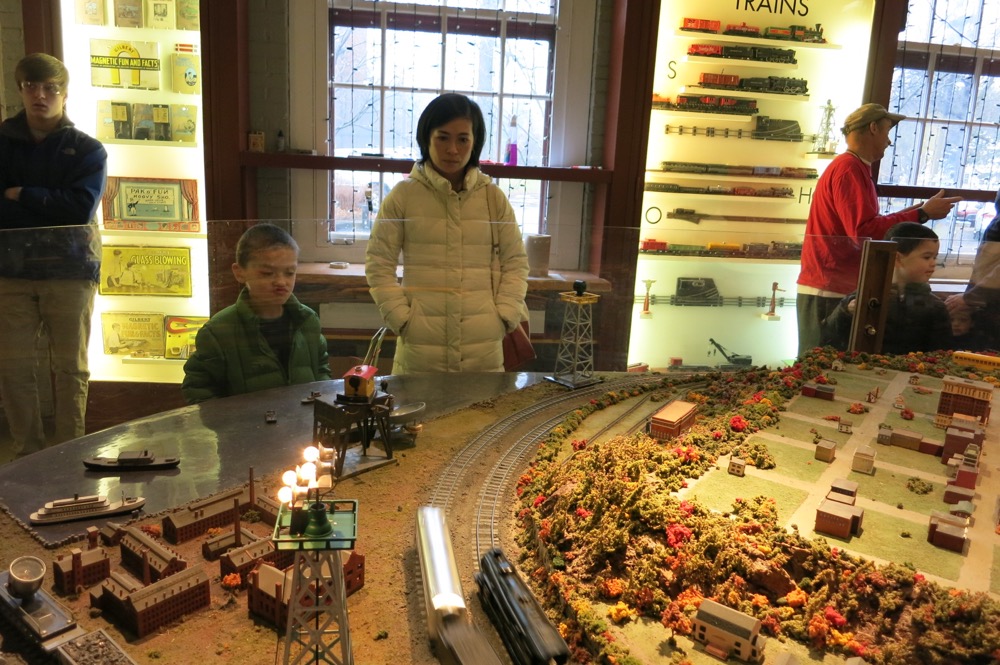 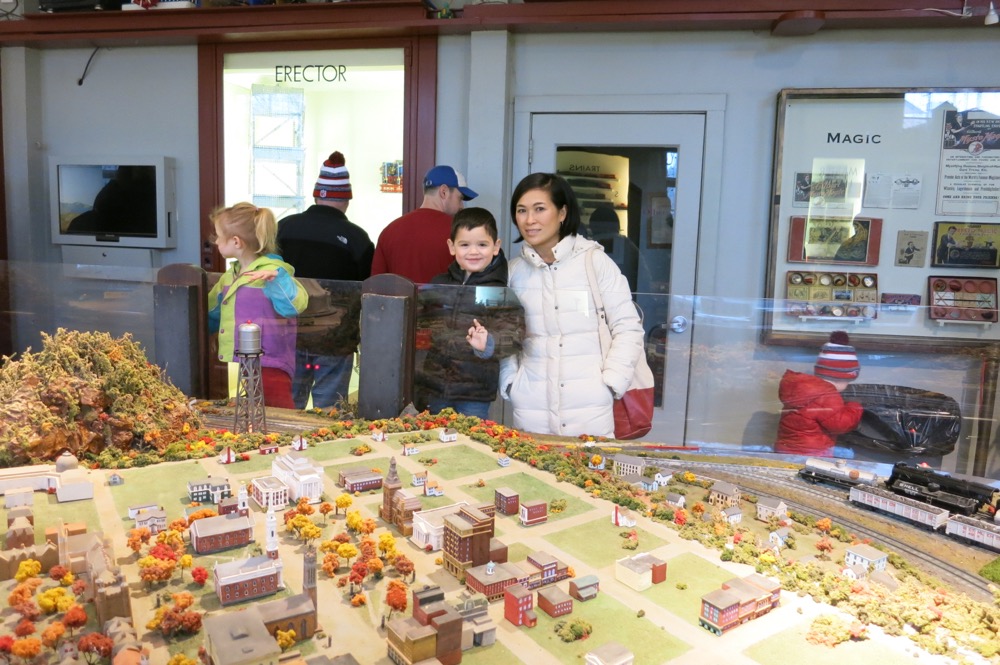 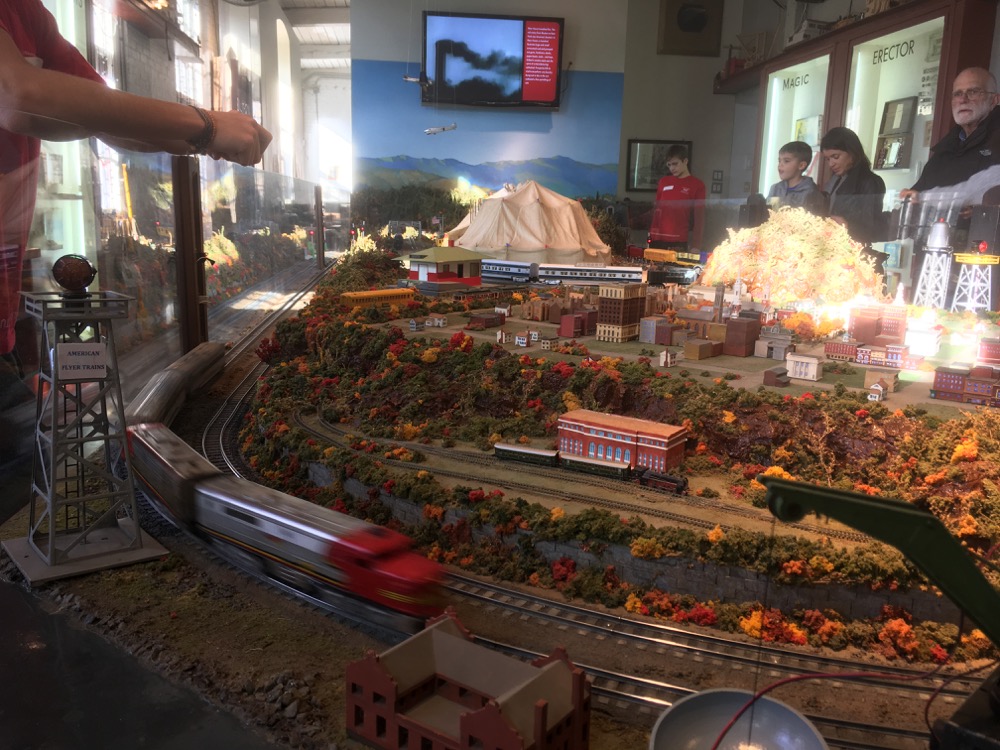 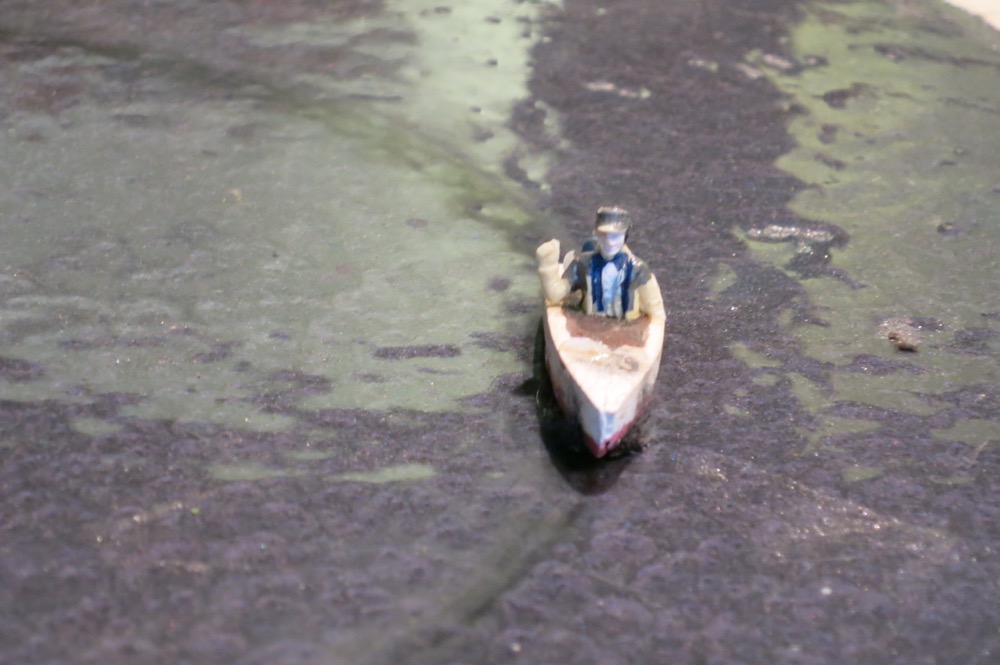 Gilbert’s American Flyer trains were the last of his great product lines. Three thousand men and women worked at Erector Square in the Fair Haven section of New Haven. Gilbert’s two-railed, realistically detailed locomotives were a spunky David to the industry Goliath – Lionel. The Gilbert line grew with great promise through the mid 1950’s until it encountered an unconquerable future: television. Television stole time and attention. It sold disposable toys. It substituted passive entertainment for active learning. Gilbert produced trains for just 20 years. 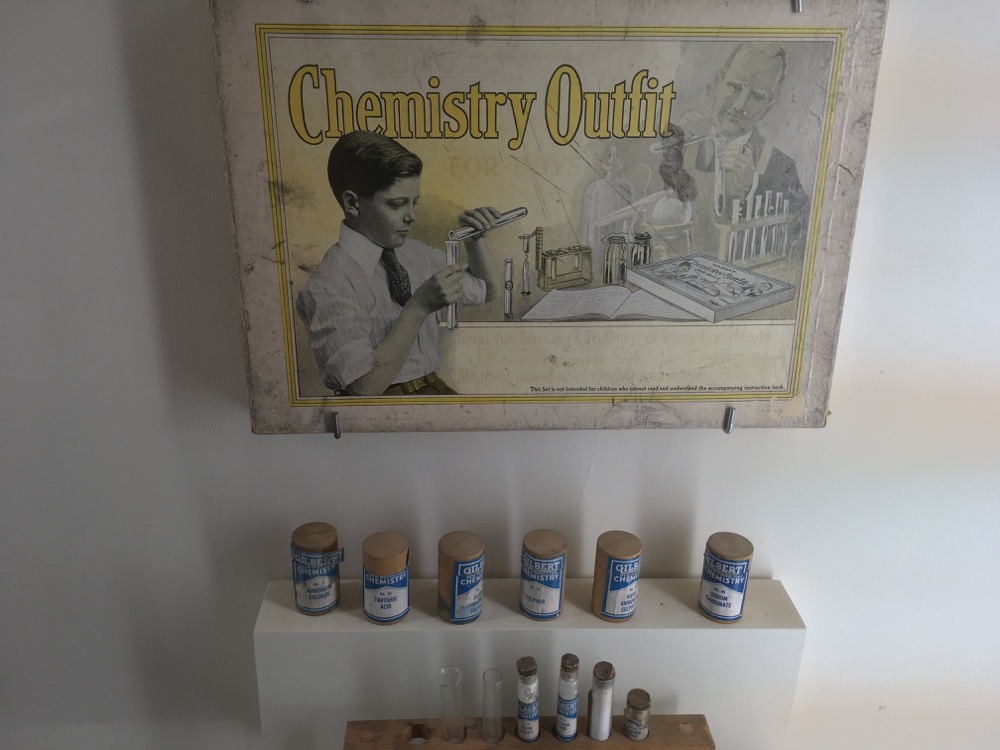 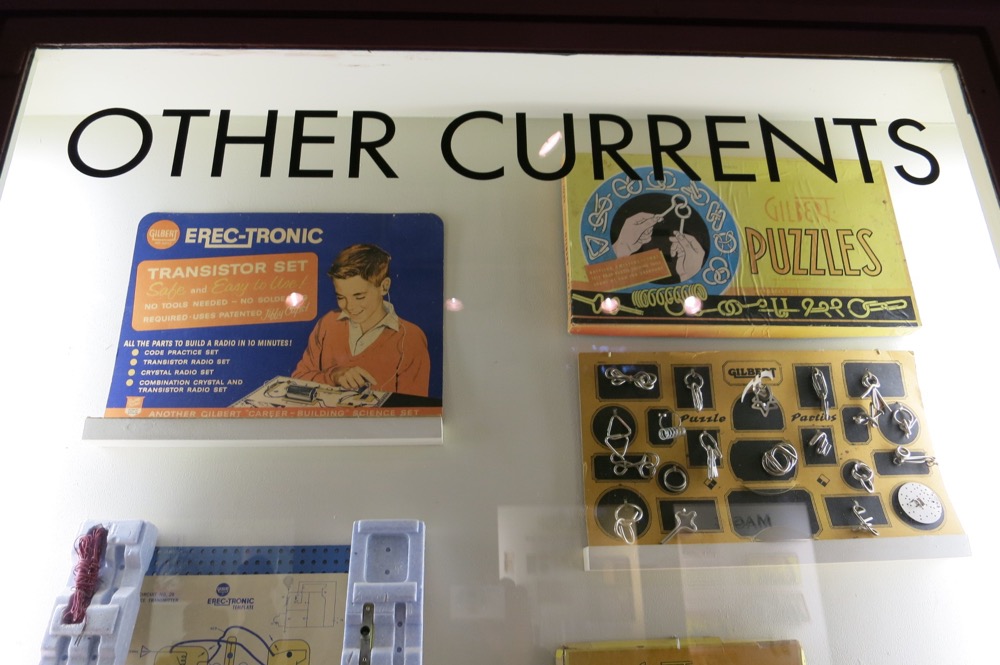 The Eli Whitney Museum collects and studies the products and legacy of A.C. Gilbert and his company. Between 1909 and 1964, the Gilbert Company was the premiere producer of learning toys in the world. Its showroom in New York, the Gilbert Hall of Science, was an emporium of experimental learning and a forerunner of the modern science museum. The Eli Whitney Museum’s workshops still nurture that experimental learning.

There are a bunch of Gilbert Company toys on display here, some of which that are, shall we say, a bit crazy. 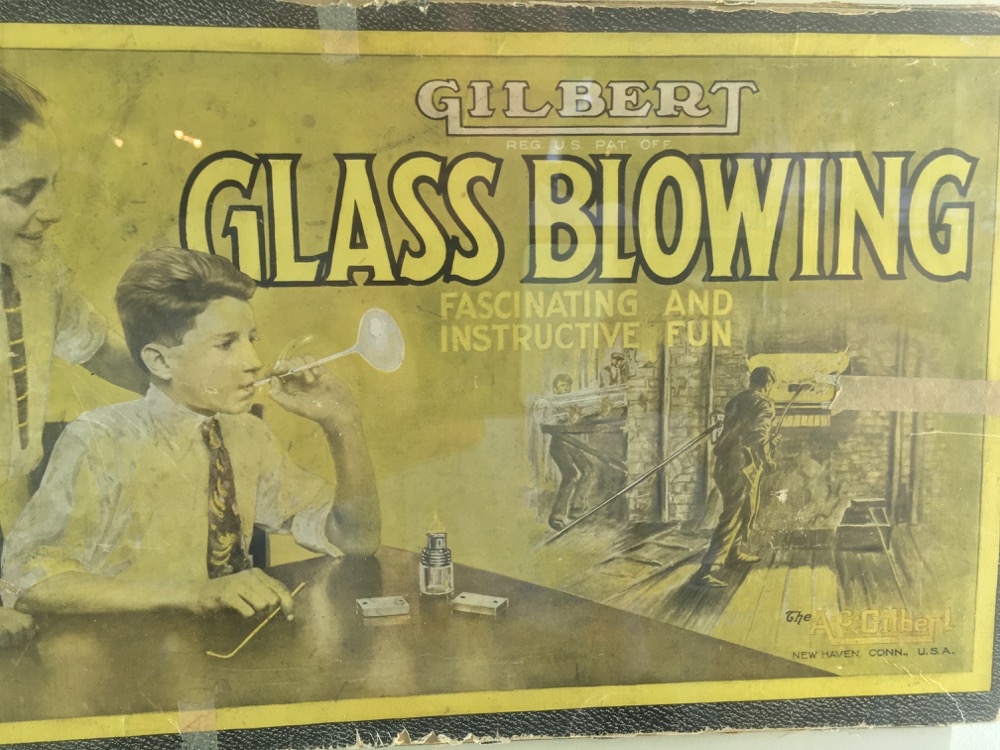 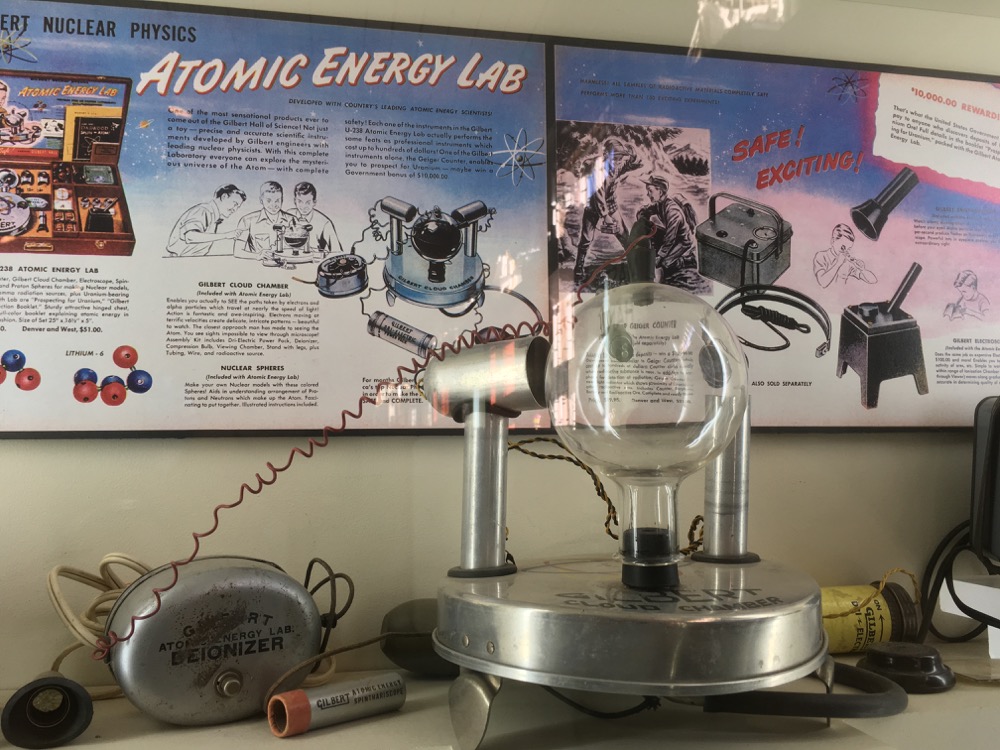 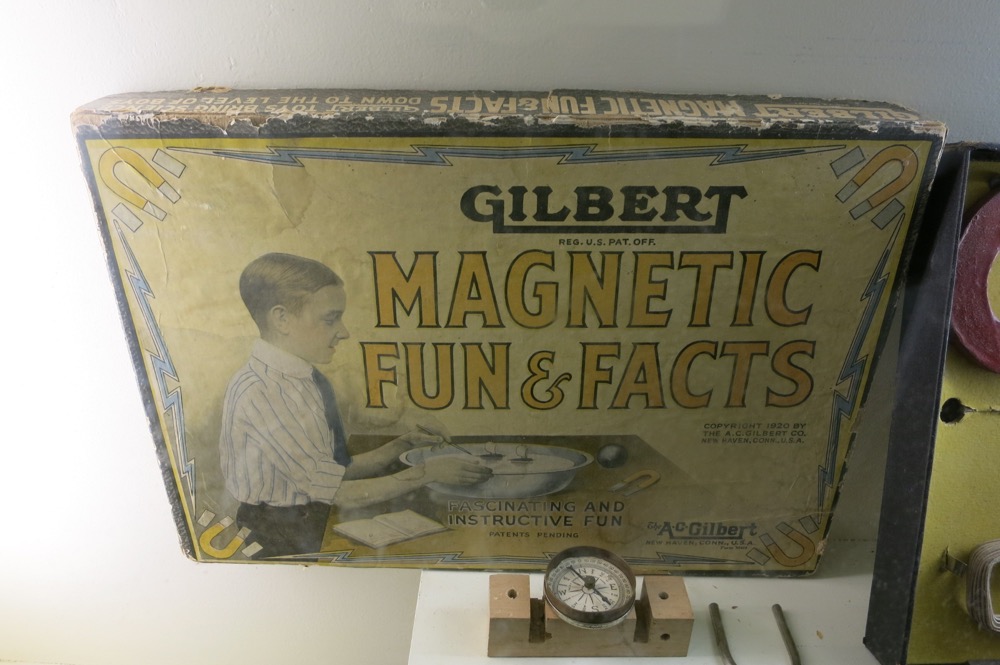 … magnets, how do they work?

What child doesn’t want to blow glass and play with radiation? Fantastic.

The museum had some Da Vinci and Galileo exhibits when we visited as well. An entire wall was devoted to Galileo’s Marble machine that if you know my son Damian, you know that he spent an entire hour staring at it. It’s just a big marble run that uses gravity and principles of physics to propel parts to move and return the marbles to the top to drop again. 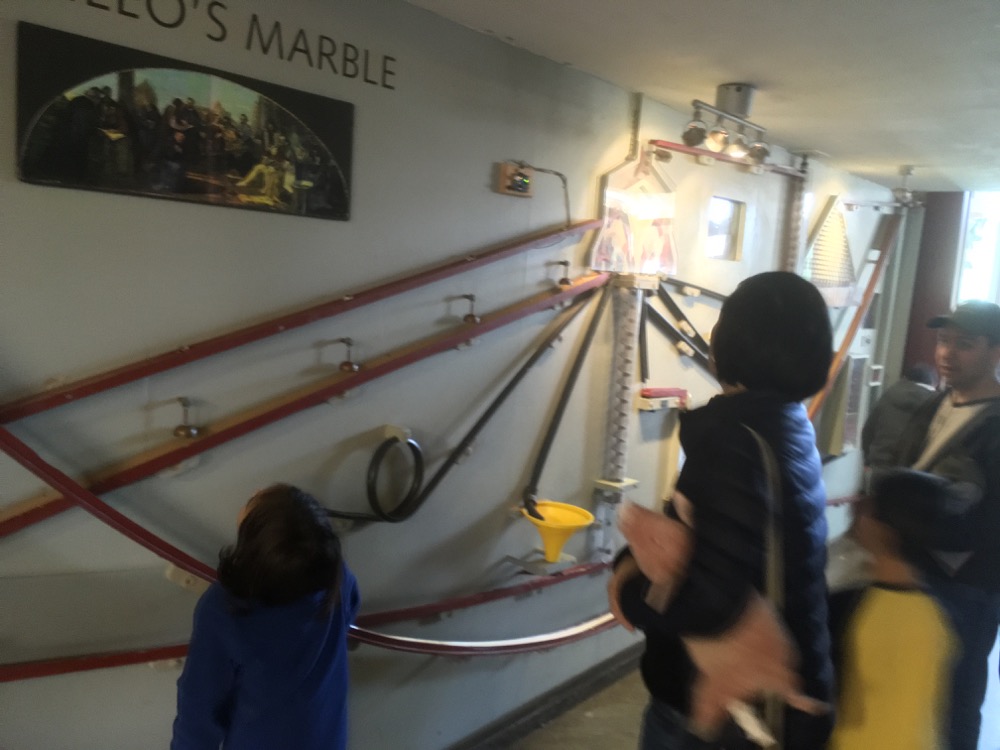 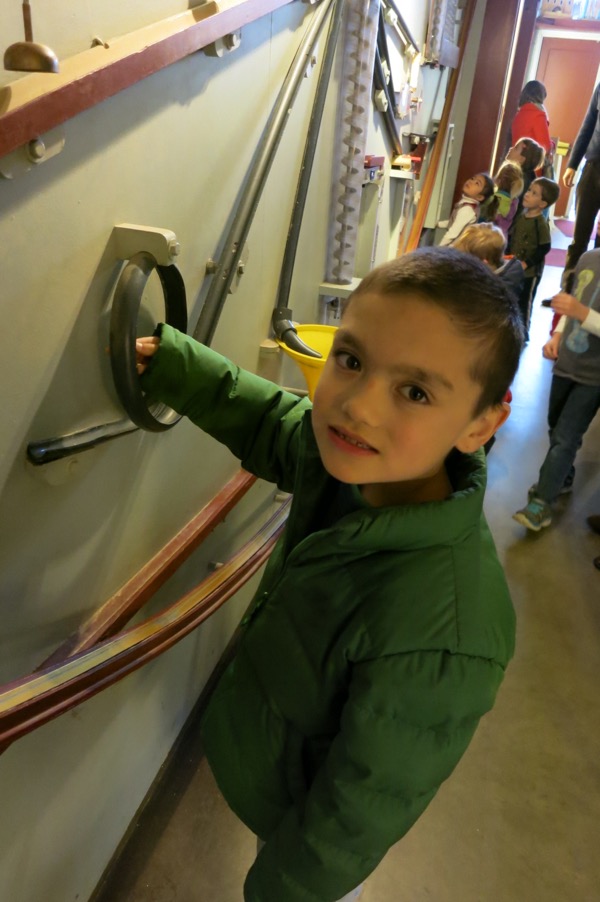 For several years, Damian would spend hours at home with smaller versions of marble runs that we bought for him. Pre-iPad, these were everything to him and his unique interests. He is still enamored with Rube Goldberg machines and really anything that sort of has action/reaction qualities.

This obsession allowed Calvin to enter the workshop area and leisurely build things with the young apprentices that volunteer here for their own educational purposes. During one visit, he made a rubber band propelled car which he was very proud of. 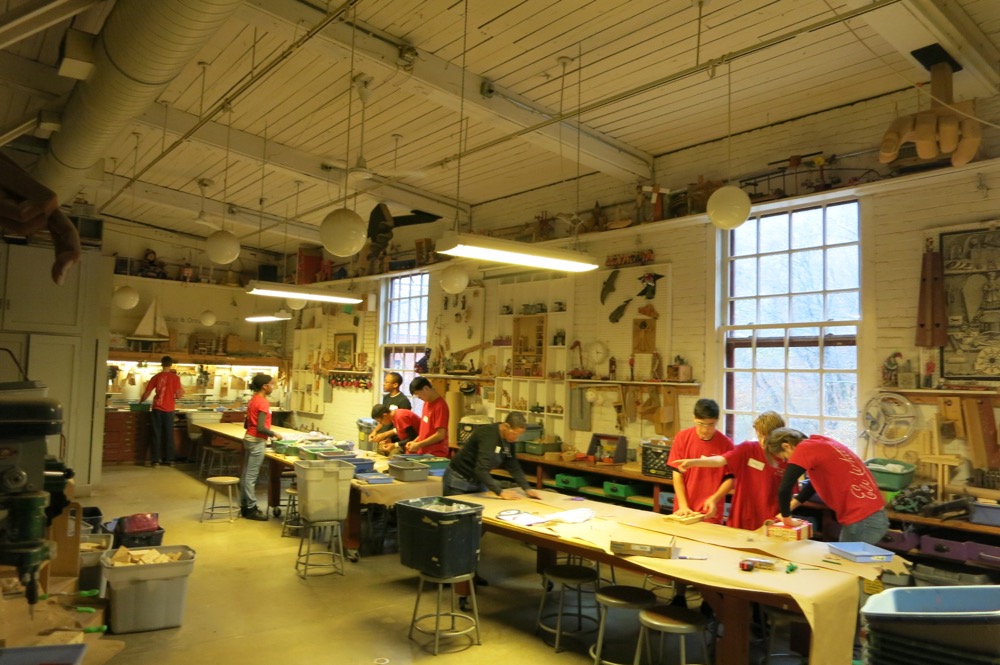 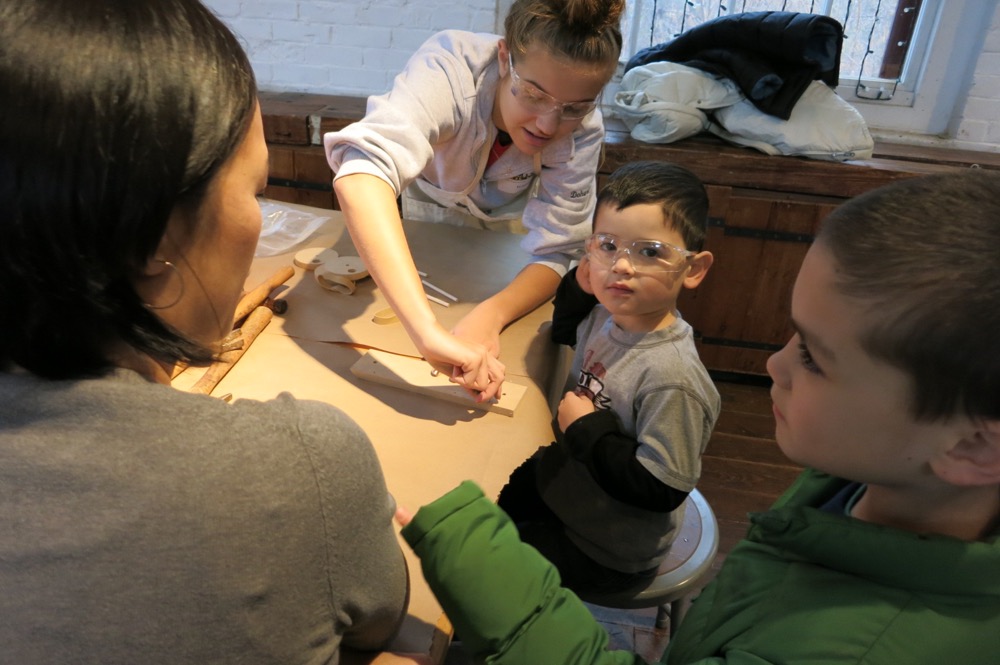 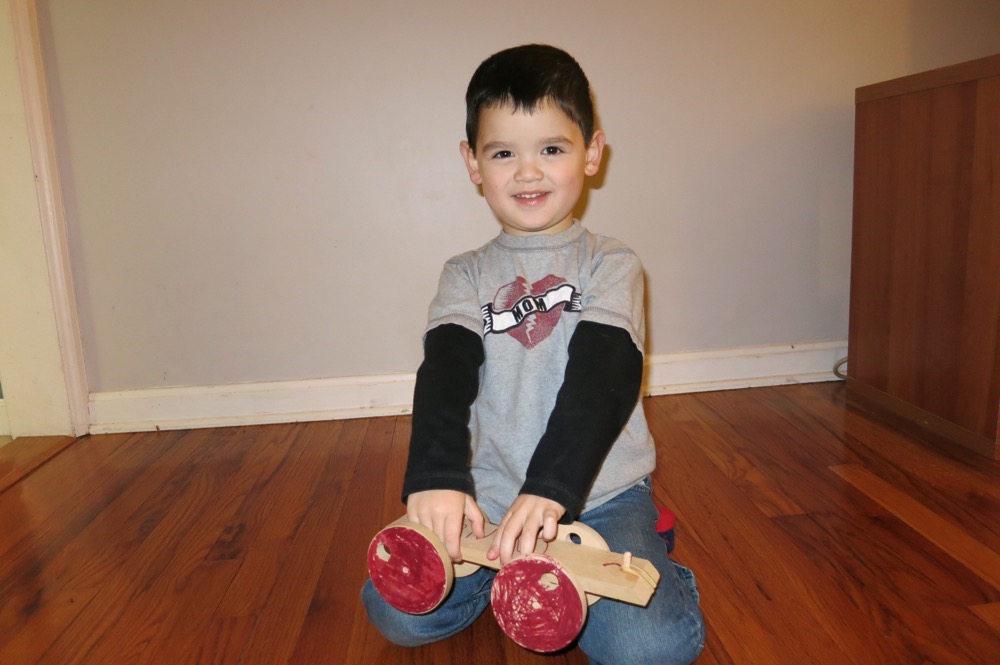 The Eli Whitney Museum is not what many likely think it is. Old goats like me would like them to beef up their historical and biographical section on their namesake, and the kids would surely like the train display to be a year-round thing. But the Whitney is constantly reinventing themselves in the spirit of the man, so they probably shouldn’t listen to me anyway. 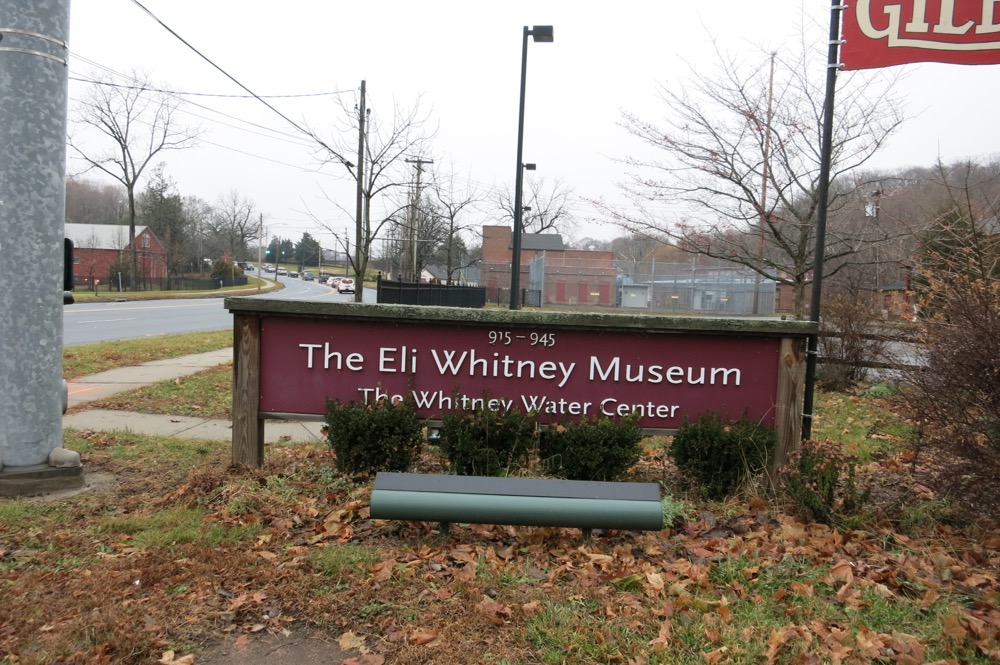