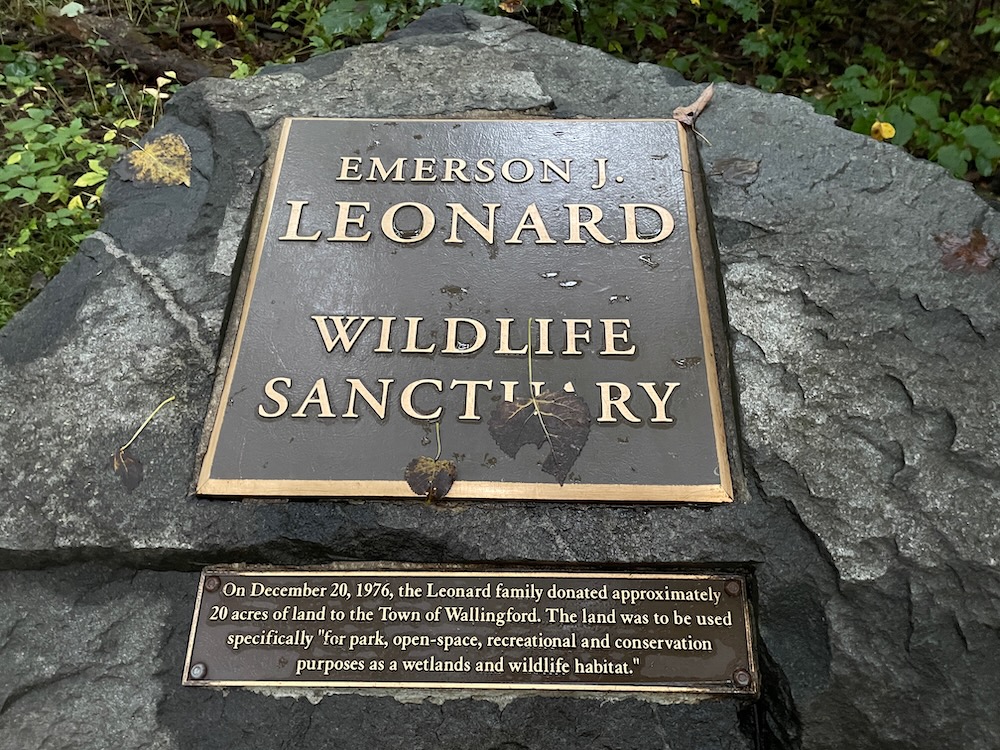 Not only that, but someone or some people took the time to blaze and (almost) clear these trails and they deserve their moment in the CTMQ Sun. And heck, to the person who added “Turtle Trail” to Google Maps and to those responsible for the wooden signs nailed to the trees at the trailheads, this page is for you.

These trails are loops off of the quite nice and paved Quinnipiac River Linear Trail in Wallingford. They both head off the eastern side of the paved path nearer the southern end of it and they both have wooden signs that make no sense to me at all. Let’s start with the unnamed (per Google Maps) northernmost trail. 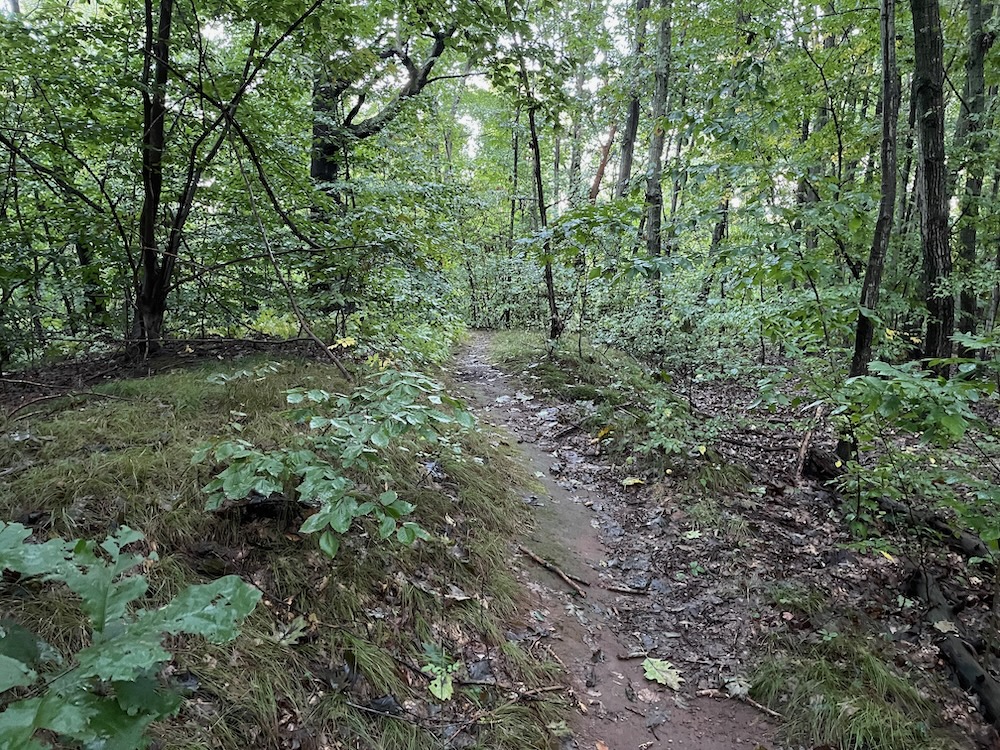 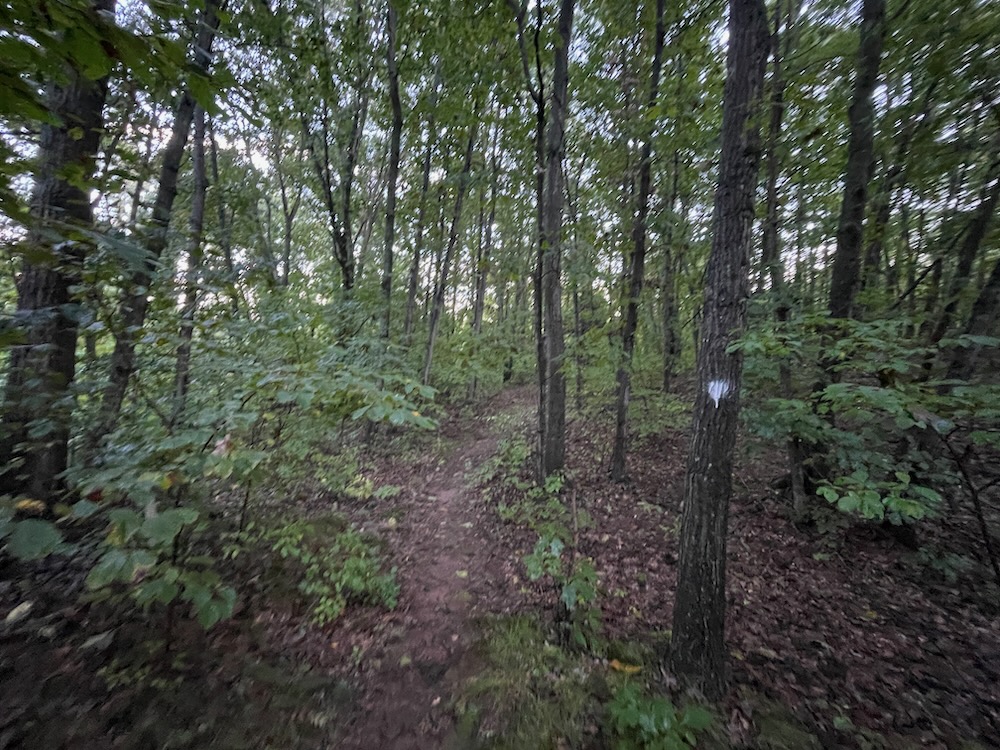 National Civilian Community Corps (NCCC), or AmeriCorps NCCC is an AmeriCorps program that engages 18- to 24-year-olds in team-based national and community service in the United States. National Civilian Community Corps teams complete about four different six- to eight-week-long projects during their 10-month term of service. Each team is made up of eight to twelve Corps Members and one Team Leader. Corps Members and Team Leaders are representative of all colors, creeds, states, and economic status.

Huh. Now I know. Thanks AmeriCorps! 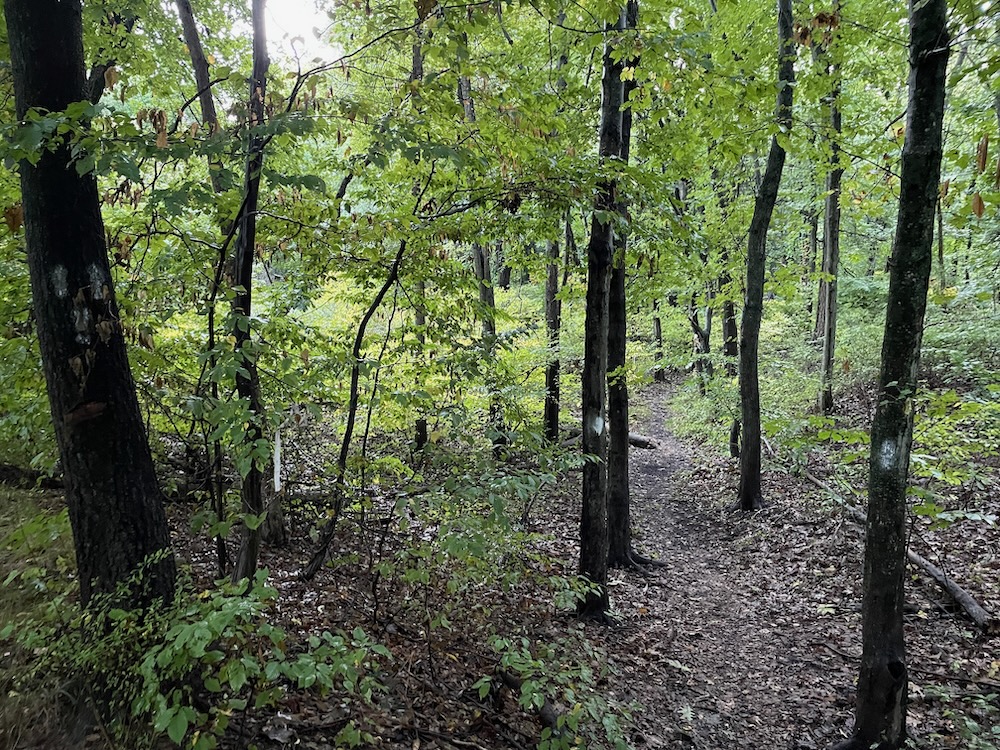 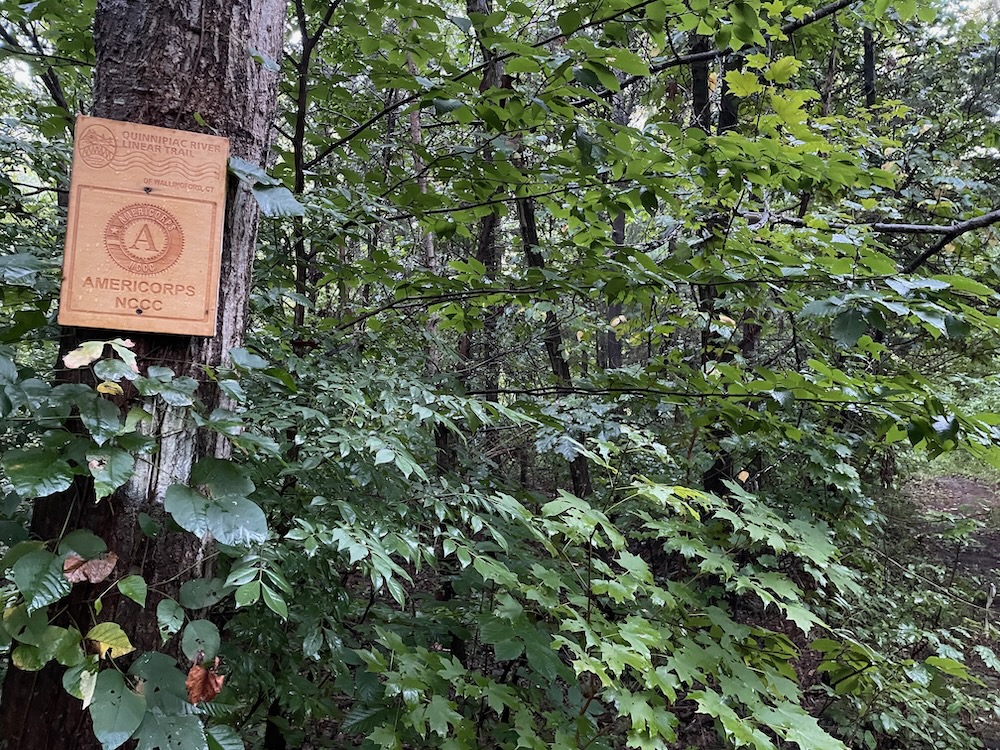 And Thanks Emerson J. Leonard! I can’t find anything about him, so all I know is that he donated a decent chunk of land along the Quinnipiac River in Wallingford. A parcel that is likely more or less underwater for several weeks out of the year.

The northern loop is blazed white and it merely heads toward the river through the woods and then curls back around to the paved path. Near its turn back, it has been rerouted and not cleared very well and there’s absolutely nothing of interest to see on this whole trail and you do not need to walk or ride it on your mountain bike. 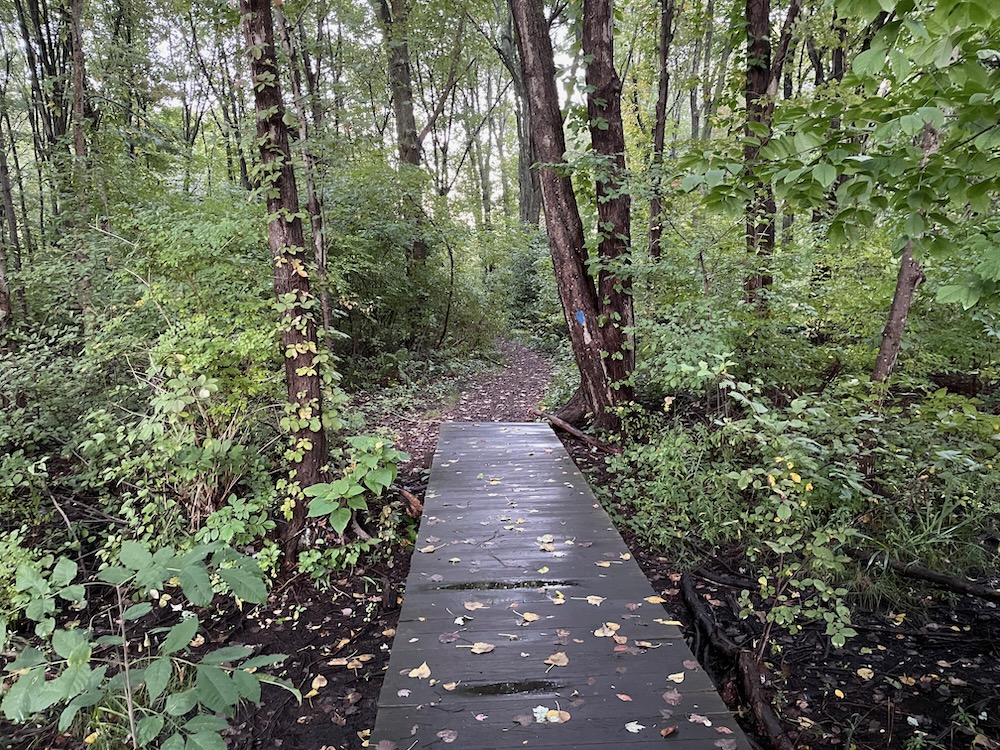 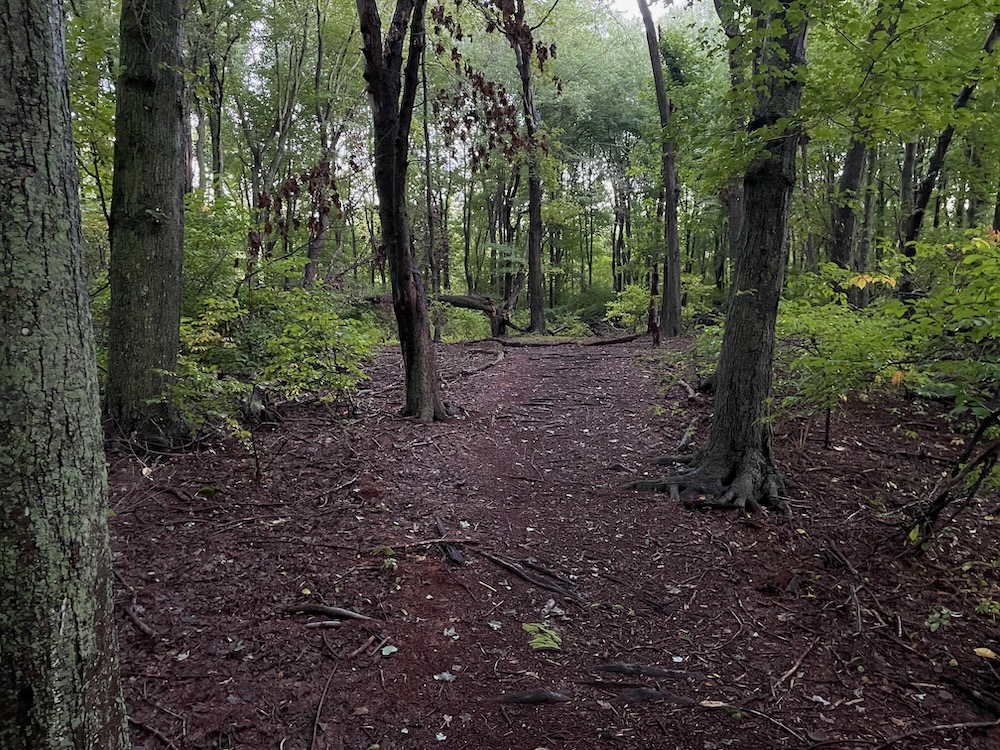 But it is blazed. And has that AmeriCorps sign. So there you go.

The more southern trail – the one named “Turtle Trail” on Google Maps, is a short lollipop loop that begins with a raised boardwalk. That portends excitement ahead! That shows me that a high level of effort was used to create this trail!

… But I’m not sure why. The boardwalk is nice, but it leads to a flat, featureless trail through wet woods and over a million roots. Neither trail actually reaches the Quinnipiac River, but both come pretty close. At one point, I did walk near a wetland area, choked with phragmites, that I can only assume is home to many turtles. 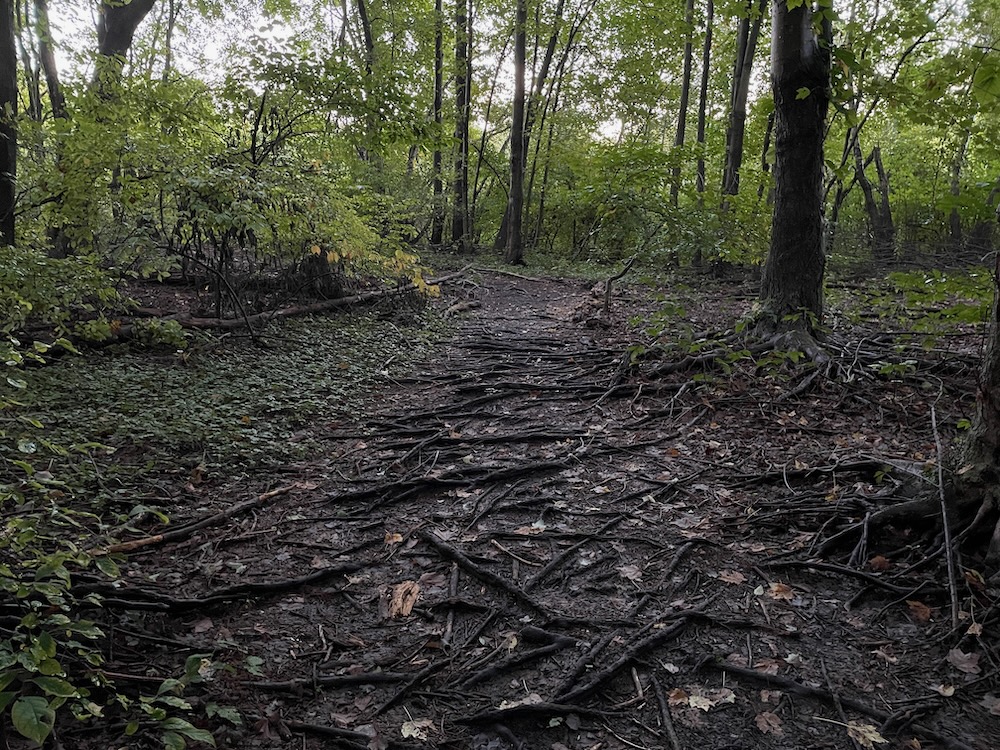 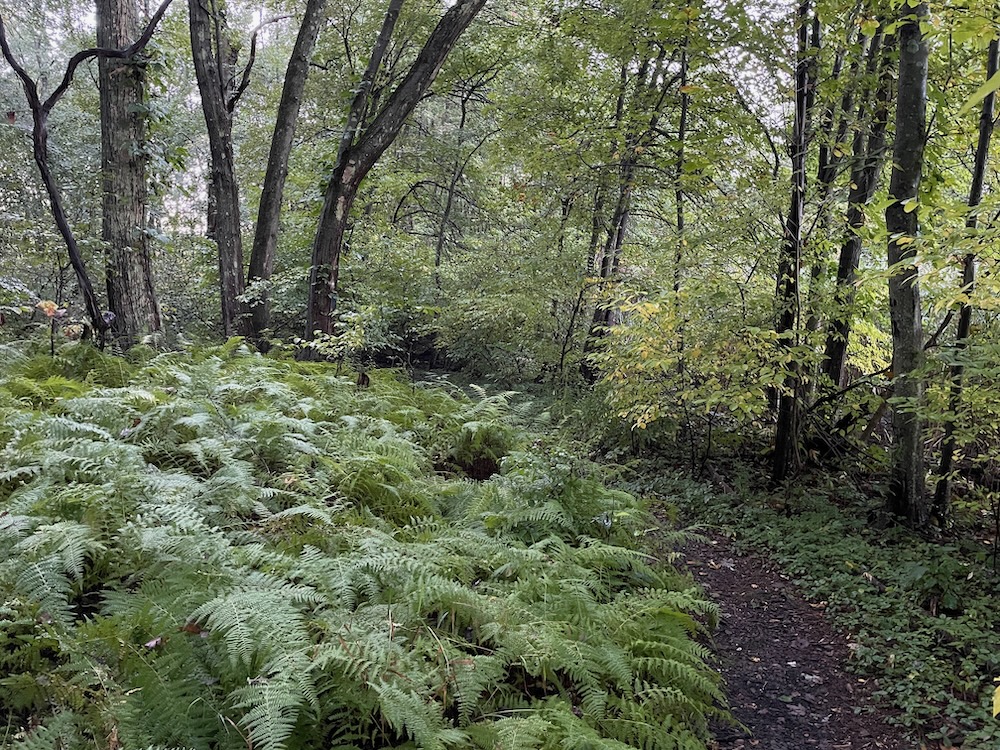 I didn’t see any turtles on my trek, and quite frankly, I’d be surprised if anyone ever does. This doesn’t really seem like prime turtle habitat.

Look, I like what AmeriCorps is and I like the idea behind what they did here. The Linear Trail is quite nice and these trails provide a different view of the woods and river floodplain. Both trails are short and flat, but don’t really lead the hiker to anywhere remotely interesting. Wallingford has a lot of unexciting trails, but unexciting trails are better than no trails. 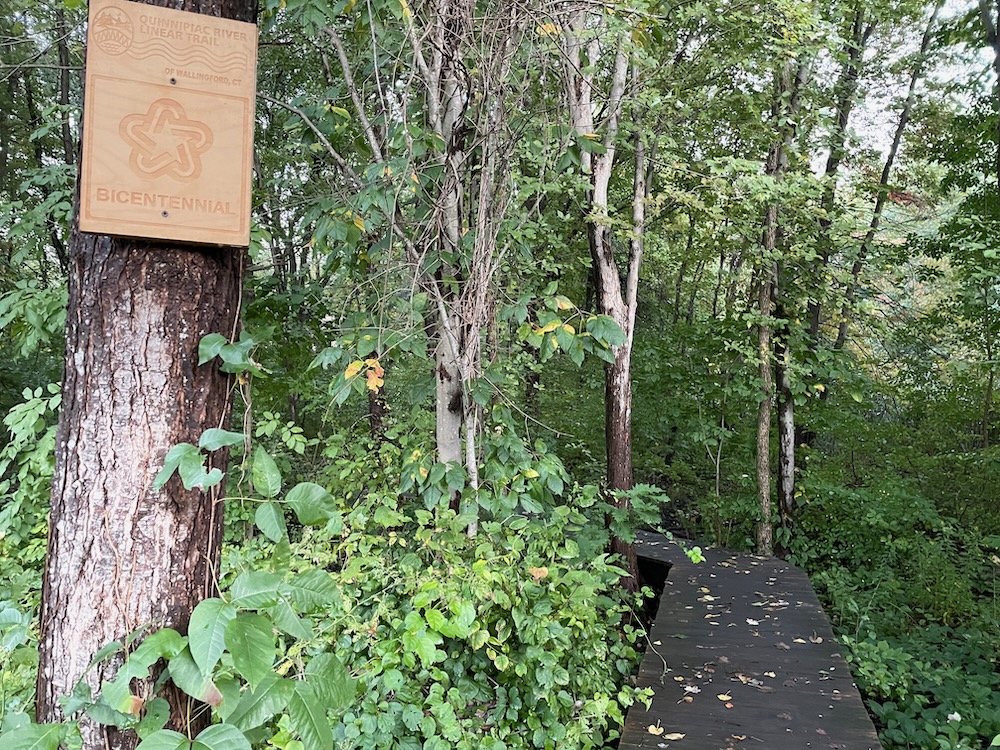