You won’t believe this – and you shouldn’t believe this – but it took me maybe three trips to finally get these two pictures of the Griffin Cascades. Mostly because I never really cared to get a stellar picture. And also because it is often overgrown and not worth the effort to get to the stream. And also because Bloomfield has put several “No Parking Anytime” signs at the place where you’d want to park to see this place if you were of the mind to actually try to see this place. 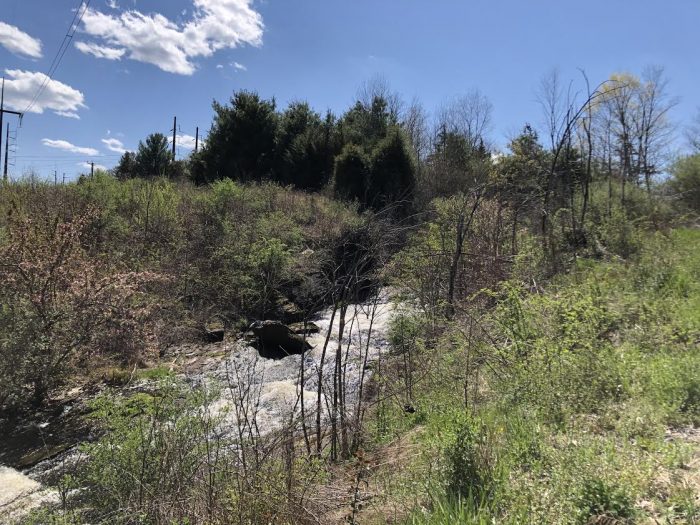 Lots of the below is from Steven A. Hubbs who has put a lot of time and energy into what amounts to a pretty little spot in Bloomfield hemmed in by roads and CL&P property. This cascade doesn’t appear in any waterfalling guides or anything, but I do rather like them.

It is claimed that these are Bloomfield’s only permanent, natural falls which I would agree with. Anyway, let’s hear from Mr. Hubbs.

History says that Englander John Griffin, one of the earliest settlers in the area in the mid 1600s, set up a tar and pitch manufacturing facility at the nearby Farmington River in 1645. He also made replacement masts for sailing ships from local trees. Griffin hired the Massaco Indian inhabitants to help and paid them in rum! Rum Spring – a nearby water source and the unofficial name of another small brook – is named for that… The masts were floated down Griffin Brook from a point past the falls and on into the Farmington (and perhaps further on to the Connecticut) River.

The gentle falls are along a stretch of the brook that flows adjacent to Tariffville Road, before heading under the street via two large culverts. A portion of Griffin Brook passes through the Merritt Preserve – part of the Wintonbury Land Trust. The 3 acre parcel, with about 560 feet of frontage along Tariffville Road, was donated to the Trust in 1995 by Mr. and Mrs. Robert Merritt and harbors a myriad of plant and animal life…In fact, it’s a GREAT area to observe wildlife in early morning and late evening, according to Vikki Reski of the Land Trust. CL&P property borders the preserve on two sides, effectively linking it to a large area of undeveloped wetlands in Bloomfield. 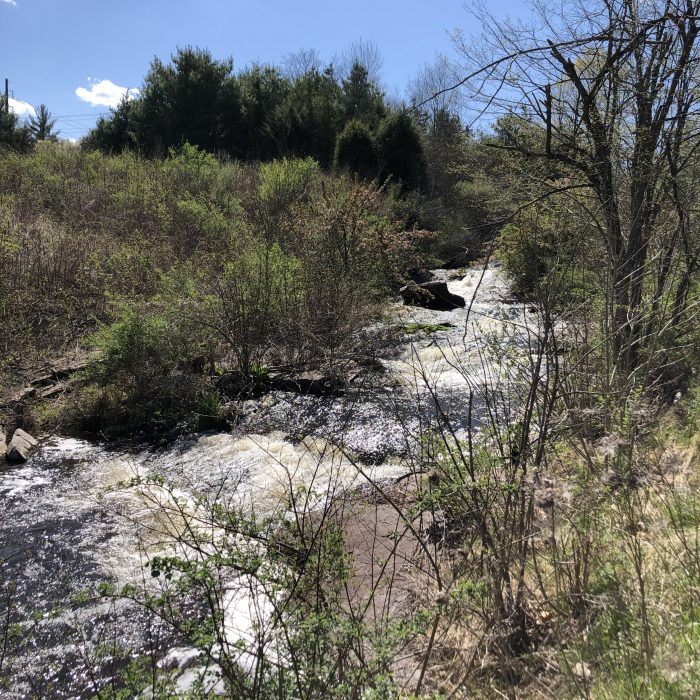 I was reminded of the existence of the Griffin Cascades while riding the Bloomfield Greenway. It crosses Griffin Brook via a handsome bridge built over the original railroad line culvert, surrounded by CL&P powerstation… stuff. I immediately remembered, “Oh yeah! Griffin Cascade!” You won’t want to approach from the bike path above however. Although you can hear the falls from there, the brush would tear you to shreds.

Once back to the car, I drove to the car pull-out and proceeded to park next to the No Parking signs. This freaked my son Calvin out – that is, he thought I was going to be arrested. I assured him I was not, hopped out of the car, got my pictures, and returned to Calvin, unarrested. Phew. My son’s first lesson in White Privilege I guess.