Aha! You were expecting the title of this page to be “I’m Fried, Man,” but I changed it up on you! After all, Joshua’s Trust has many dozens of properties in over a dozen northeastern Connecticut towns. I have a long, long way to go with them so yeah, I better not even think about being “fried,” man. 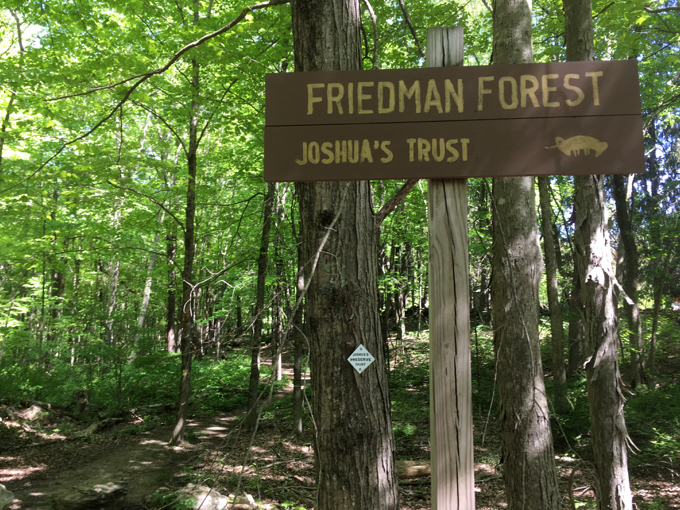 And in all honesty, I’m not. Friedman Forest was my seventh and final Trust property in Ashford and all it did was get me excited for more in other towns.

In fact, in what will become a long lost footnote to CTMQ history, Friedman Forest was my final “Ashford thing” in my effort to “complete” Ashford! (Don’t worry, I won’t even remember this down the road.) 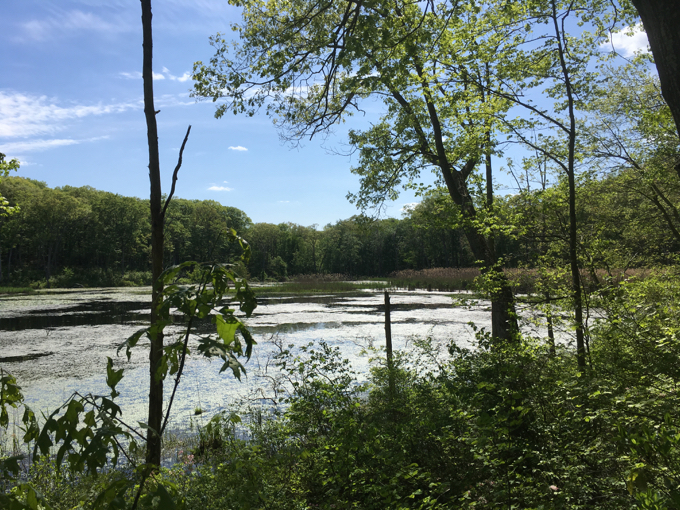 And speaking of “down the road,” after my whole family enjoyed Bakerwoods Farm, I had Hoang drop me off at the trailhead while she took the boys for ice cream at the Ashford Dairy Bar a few minutes away. We had somewhere to be later in the day, so I essentially had 1.8 miles to hike in the time it took my sons to eat an ice cream cone five minutes away.

I love a challenge. 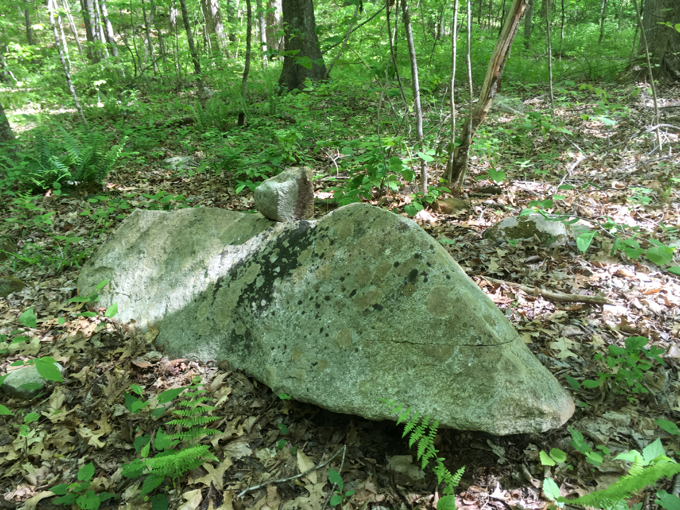 In accordance with the will of Abraham R. Friedman, his executor, Myron Friedman, conveyed this 143 acre property to Joshua’s Trust in September of 1987. The deed states that the land shall be held as a nature and wildlife preserve, that it shall be open to the public for walking, hiking and observing…

Hm. I had to do a lot of running. I hope the brothers Friedman are okay with that. 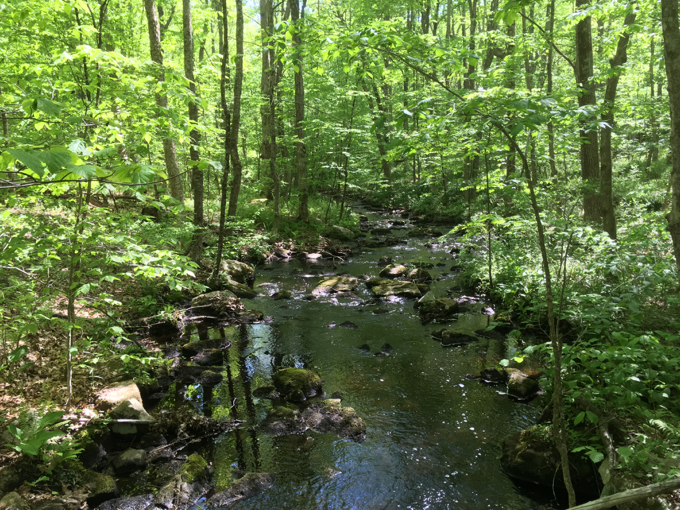 Abraham R. Friedman and his brother, Samuel H. Friedman were lawyers who worked in Hartford, and they loved their land in Ashford and wished to see it preserved. The forest is primarily oak-hickory, and a lumbering operation was conducted about 25 years ago prior to preservation. The terms of the Friedman gift to our land trust specify no timbering, so the entire property will slowly revert to untouched forest. Perennial Bebbington Brook runs from north to south through the western third of the property and the drainage wetlands feed into it.

Once again, this is yet another JT property with a handsome kiosk, a nice little parking area, good blazing, and a well-planned trail. 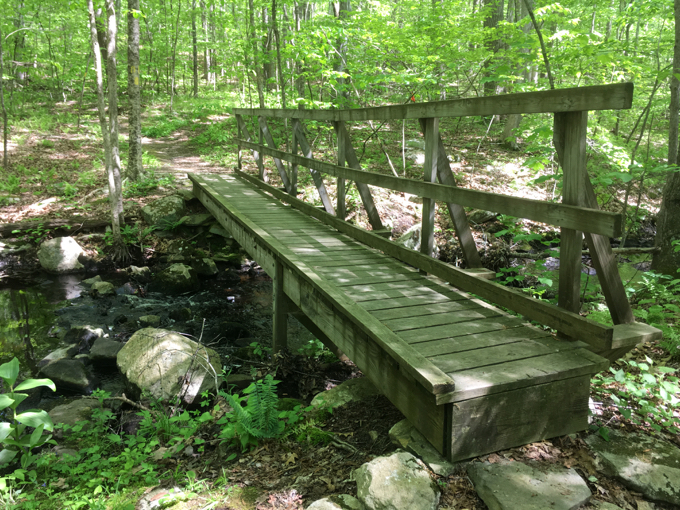 With the well wishes of my sons ringing in my ears (they acted like I was setting off on an Appalachian Trail thru-hike or something), I began down the fairly standard trail into the woods.

Once I reached the bridge over Bebbington Brook and decided to handle the loop trail in a clockwise fashion. (I wondered which would involve the least climbing, since I was pressed for time, but I really don’t think it makes a difference here.) 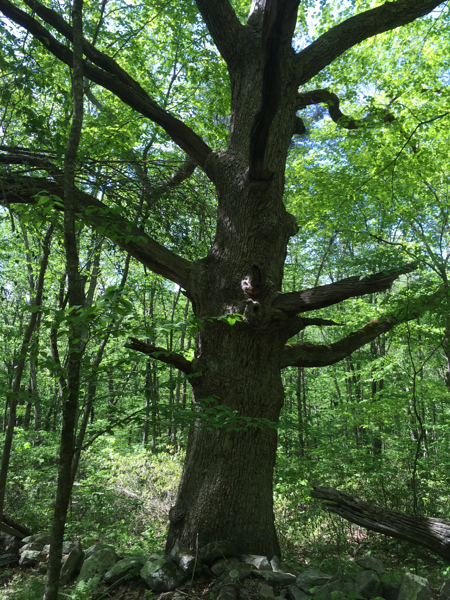 There’s a massive wolf tree here – a white oak, of course – that I had to take a moment to appreciate.

The trail presses on, more or less due east and down into a marshy area before climbing up a short hill. At the top, the trail turns south along an old stone wall and heads for its first “viewpoint.” 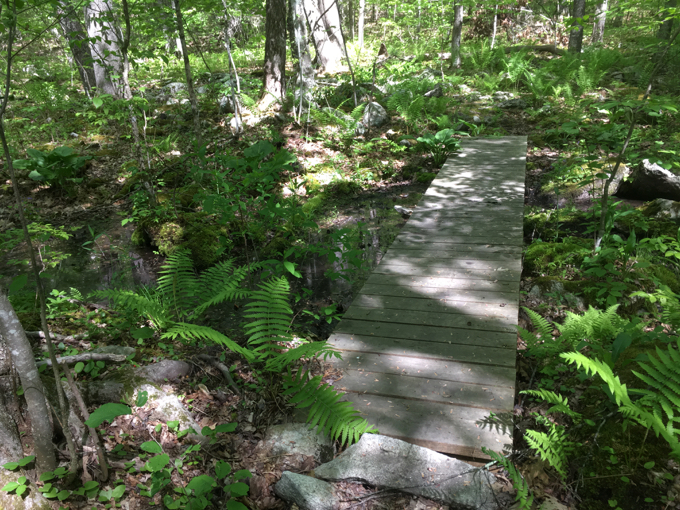 There is no viewpoint. Peter Marteka claimed in a 2010 article about Friedman Forest that it was “seasonal.” It’s not seasonal. It’s never. Which, by the way, is fine! Remember the Friedman’s wishes are to let this place return to a natural state. Whatever view there was has been eliminated by the very point of this place! 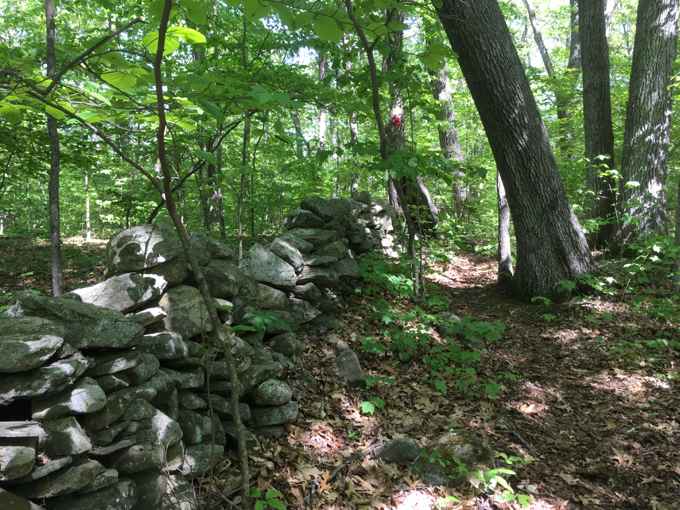 There is an out and back side trail via an easement. I jogged down the red blazed Pinkham Trail a bit, but didn’t really check it out. I figured my boys were halfway done their ice cream by now! 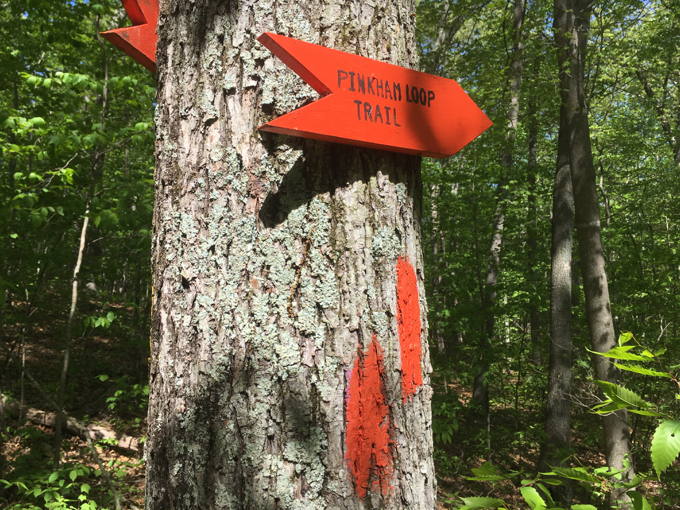 Shortly after the trail junction, I was surprised by the wetland area just ahead. I thought it was a boggy swamp, but it was more of a pond – at least in May after a fairly wet spring. Or the beavers have just been hard at work. 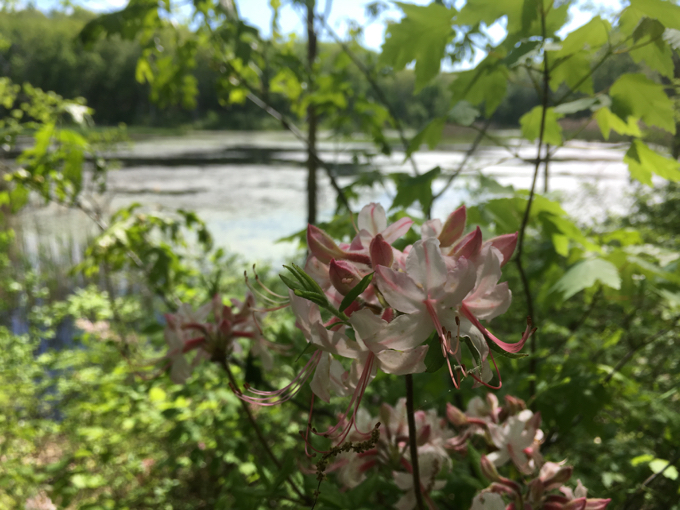 Between the pond and the trail is a veritable grove of swamp azalea (Rhododendron viscosum). They were in full bloom and their cinnamon/honey scent filled the air.

A thing about hiking: Even when you’re “in a hurry” and “have to be somewhere,” there seems to always be something that reminds you why hiking like that is stupid. This was that something. 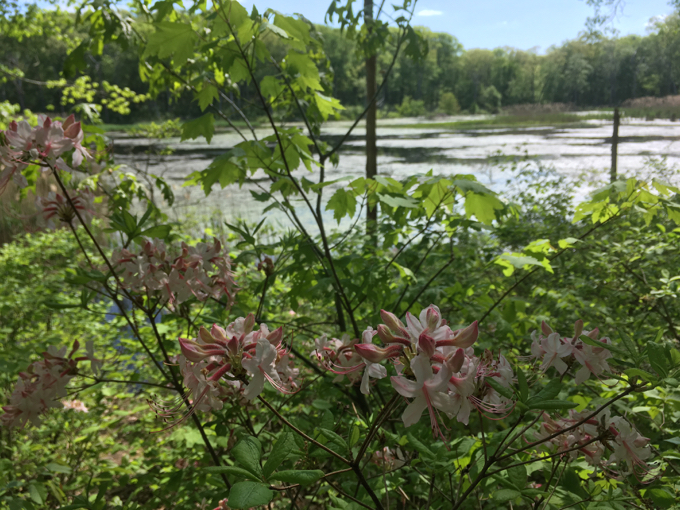 The individual flowers are beautiful and the quiet stillness of the pond, the scent-filled air… My family could wait a few minutes in the car. Give me a moment. 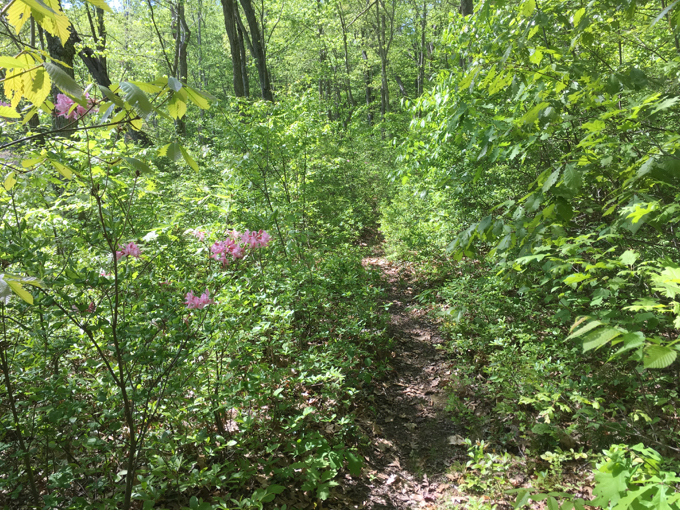 The Trust describes Friedman Forest as “hilly.” It’s not hilly. There are a couple small bumps, but nothing to get excited about.

Towards the end of the loop there are two interesting trees. One that was struck by lightning: 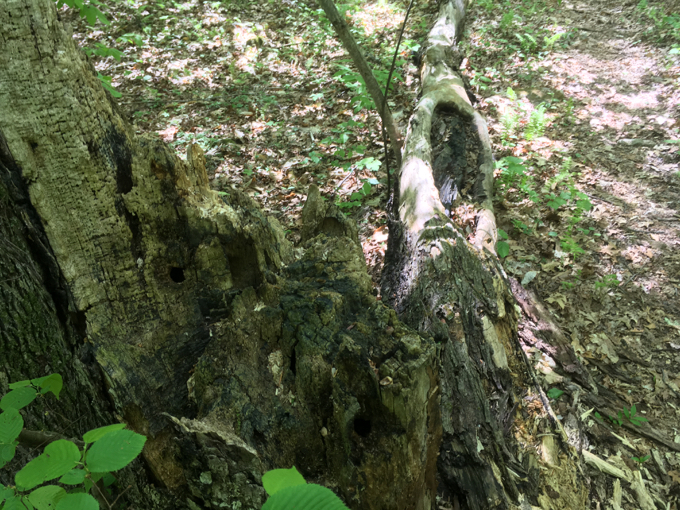 And this one that seems to be an official tree of the Joshua’s Trust. Everyone loves this tree: 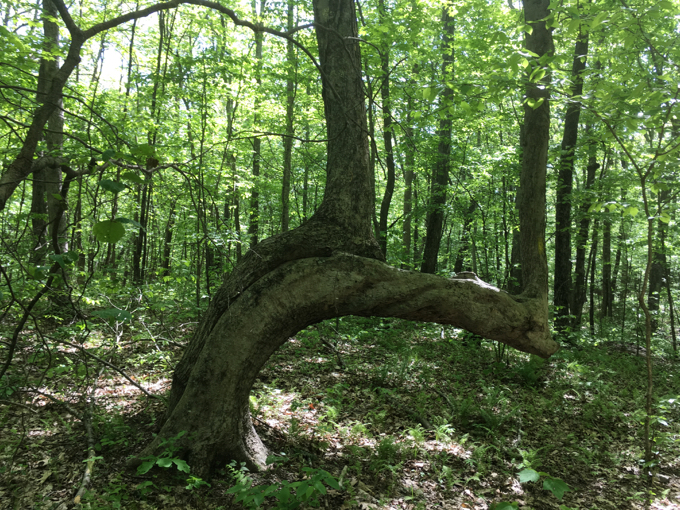 Granted, it’s an odd tree. But I’ll take the swamp azaleas over it any day.

My wife texted me when I was about four minutes away from the trailhead; they were just finishing up! I told her I’d be waiting for her where she left me oh so long ago. (22 minutes or so.)

I sat and contemplated Ashford. The historical society has plans for a museum or two in the future, but aside from that… I was done with the town.

I was so happy with myself I took a thumbs up selfie. 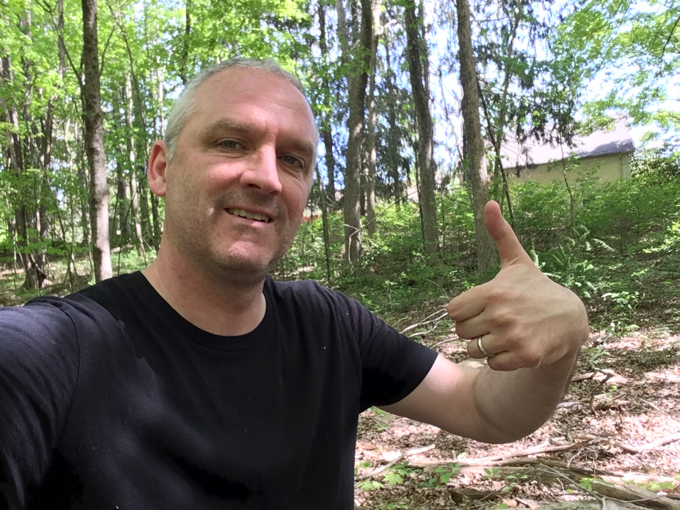