A few days after my younger son’s third birthday, I took him and his brother out to the polar vortex of Connecticut. As my gift to him. A hike through Campbell Falls State Park to check out one of our state’s finest waterfalls (that happens to be in Massachusetts), followed by a visit to a wonderful little farm in Norfolk. 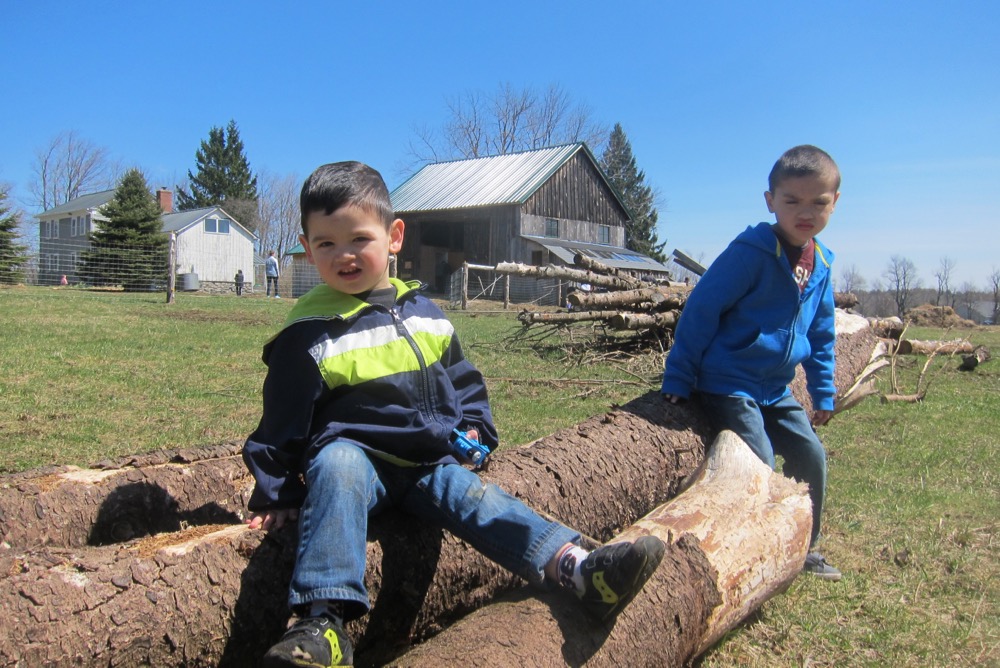 Good. And if you visit Lost Ruby Farm, you need to pay attention. For their friendly Saanen goats (a large dairy breed from Switzerland that was first imported into the US over 100 years ago) are not shy. The boys had a blast galloping around with the goats and even got goat hugs from a few. I was never concerned for their safety, but just-turned-three little boys probably had a different take after one climbed on his back. 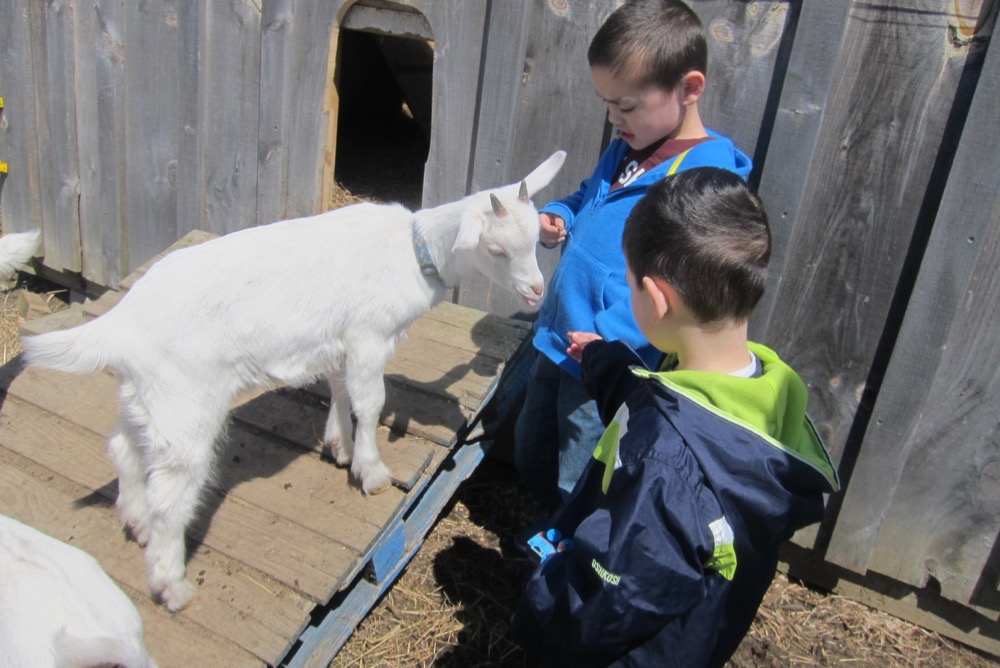 To be clear – the staff here is attentive, friendly, and happy to talk about their goats. These goats are loved and this is a safe operation. If anything, Calvin was a bit too trusting of them I guess. No harm, no foul, and we enjoyed a good half an hour learning about their lives, their milking cycles, and how they enjoy life in “The Icebox of Connecticut.”

And no, no goats are named Ruby. The “Lost Ruby” story is cute and they’ve even woven their story into their sustainable practice mission:

There never was a goat or a person named Ruby. The name refers to an uncut ruby that was lost in our farmhouse some 50 years ago. As far as we know, it’s still there under the floor somewhere. We chose Lost Ruby as our name because it was different, but also because we feel that local organic farming is restoring something to our community that has been lost along the way. We have no plans to look for the ruby because then we would have to change our name, and Found Ruby Farm just doesn’t have the same ring to it! 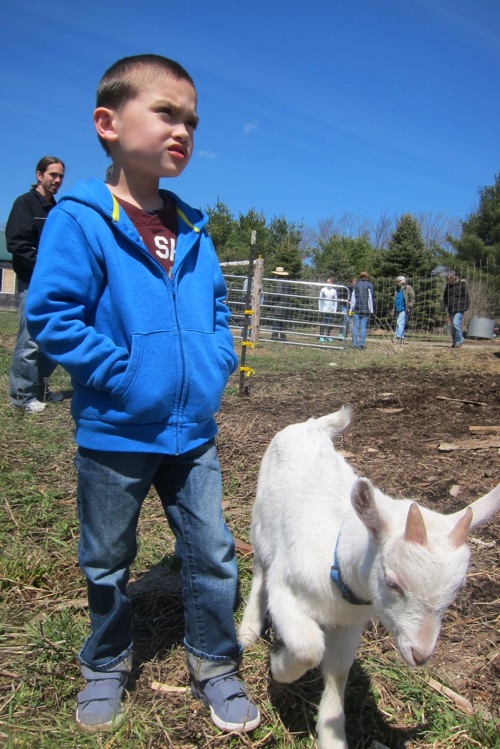 I was finally able to pull the boys away from their new goat friends to pop inside the tasting barn to check out some cheeses. I think it’s fair to say that the usual goat cheese lineup is not typically something little American kids enjoy too much. And to be honest, I usually prefer cow’s milk cheeses.

But Lost Ruby does things a little differently. Aside from the plain chevre, their selection of goat cheeses is unique across Connecticut as far as I know. They call themselves “a micro goat dairy and creamery specializing in crafting small-scale, handmade cheeses.” Okay, that’s not unique. This limits their production but Lost Ruby is confident that this “improves the quality of their product.” Also not unique. 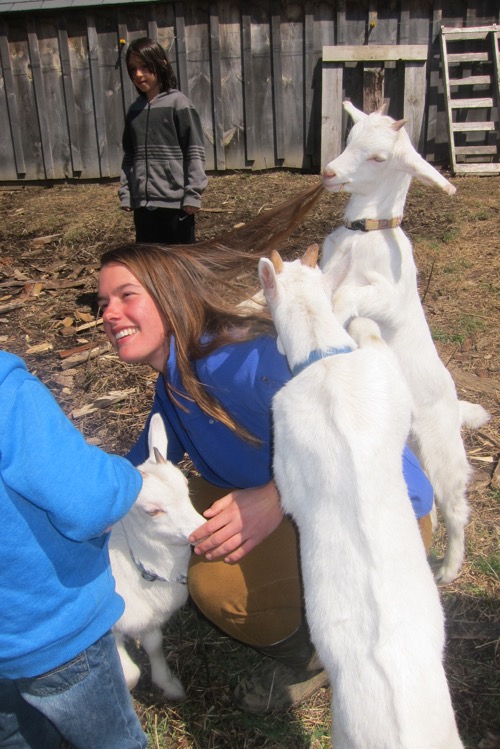 But once I saw what was on offer, I became fascinated. They incorporate wood ash into a few of their cheeses and this was only the second time I had seen such a thing. Actual black ash streaks through their Ziggurat and Graystack cheeses. (Beltane Farm in Lebanon did this, but they’ve ceased their cheesemaking operation.)

The Ziggurat is a traditional French cheese, styled after Valencay cheese. It has a flat-topped pyramid shape with a layer of fine wood ash underneath the surface mold. Ash moderates the acidity of the cheese which gives it greater complexity and depth of flavor. 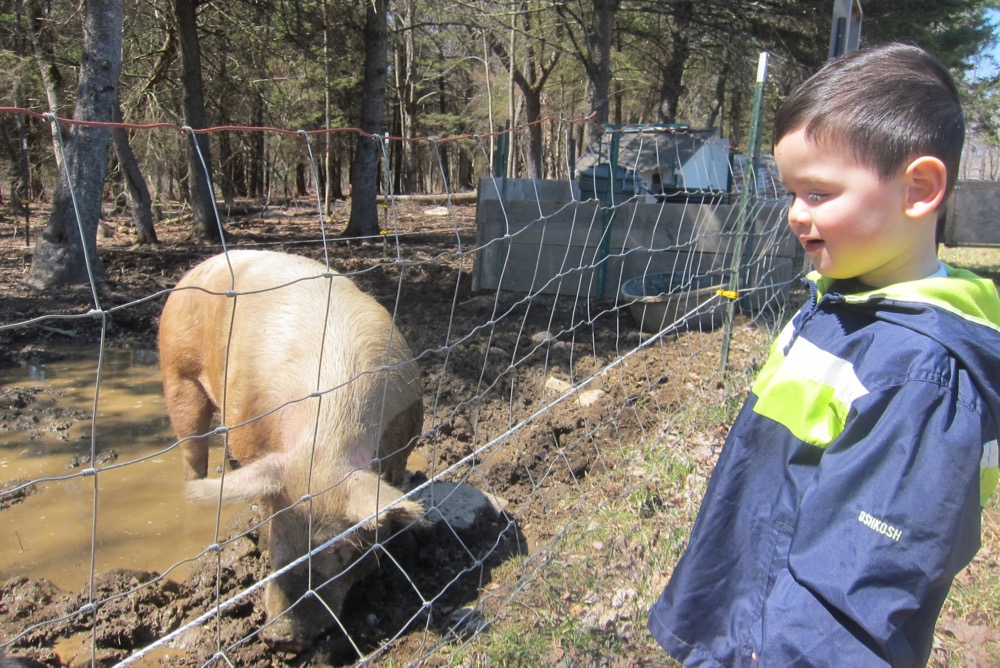 Then there was the Graystack – a cross between Haystack (their version of the traditional French classic Crottin de Chavignol) and Ziggurat. It also has a layer of fine wood ash underneath the surface mold. It’s kind of crazy that humans figured out centuries ago that “surface mold” and “wood ash” helps make delicious cheese.

Supposedly their cheeses are seasonal in that they take on different profiles throughout the year depending on what the goats are eating – as that affects the milk’s flavor. I always thought milk was milk, but I’ve heard from enough little farms in Connecticut now telling me that my thinking on this is wrong.

Ruby Farm also produces a gouda and a sharp, smoky, harder cheese encased in black pepper called Black Pearl. They didn’t have that on offer during my visit which is reason enough to return someday. In addition, there were the chevres of course. 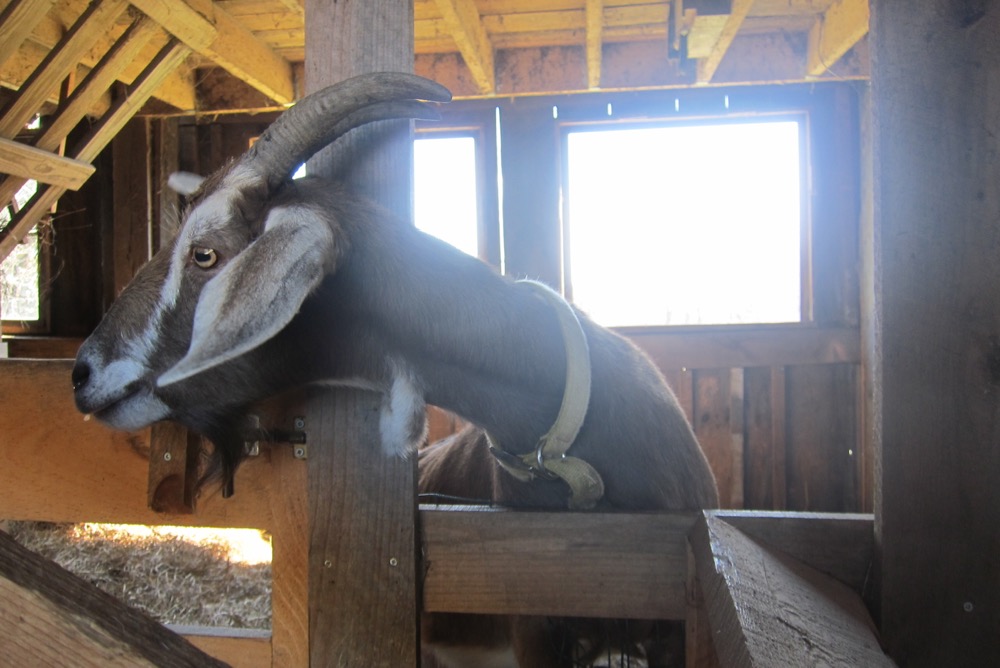 Never my favorite kind of cheese, Lost Ruby does their best to win me over:

Our chèvre is very mild, without the goaty taste many associate with goat cheese. We whip ours a bit longer than usual, so it’s a smooth spreadable version. It goes great with crackers and savory jam (hot pepper or onion) or added to a salad. It pairs with roasted beets, or in tomato soup and makes a lovely cheesecake.

But they lost me with any mention of beets (proof of Satan) and “lovely cheesecake” does not exist in my world. But I’m sure it’s good! Just not my thing. Other flavors they’ve made/make are garlic, herbed, honey lavender, smoky (made with smoked paprika) and smokin’ hot (made a maple hot sauce from another local farm). 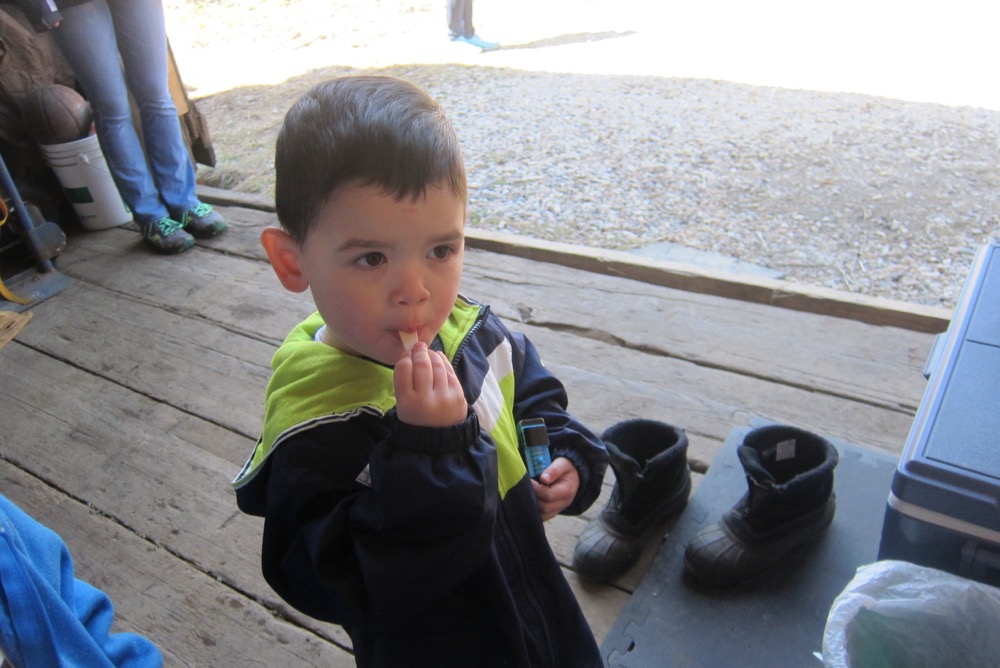 After running through all of that, the helpful woman won us all over: Chocolate chevre. (As I write this in early 2021, I don’t see this on their list of chevres anymore. So you may want to check before you run out to the northwest hills to see if it still exists.)

Dessert cheese! Smoothy, silky, chocolate flavored chevre. Now, the only way this possibly works is if they really do make a “less goaty” chevre, whipped more than the usual. Put it this way – my boys couldn’t get enough of it. Unfortunately, there’s a limit to how much free chocolate chevre a tiny little farm in Norfolk is able to hand out, so they eventually did get enough of it, whether they thought so or not. 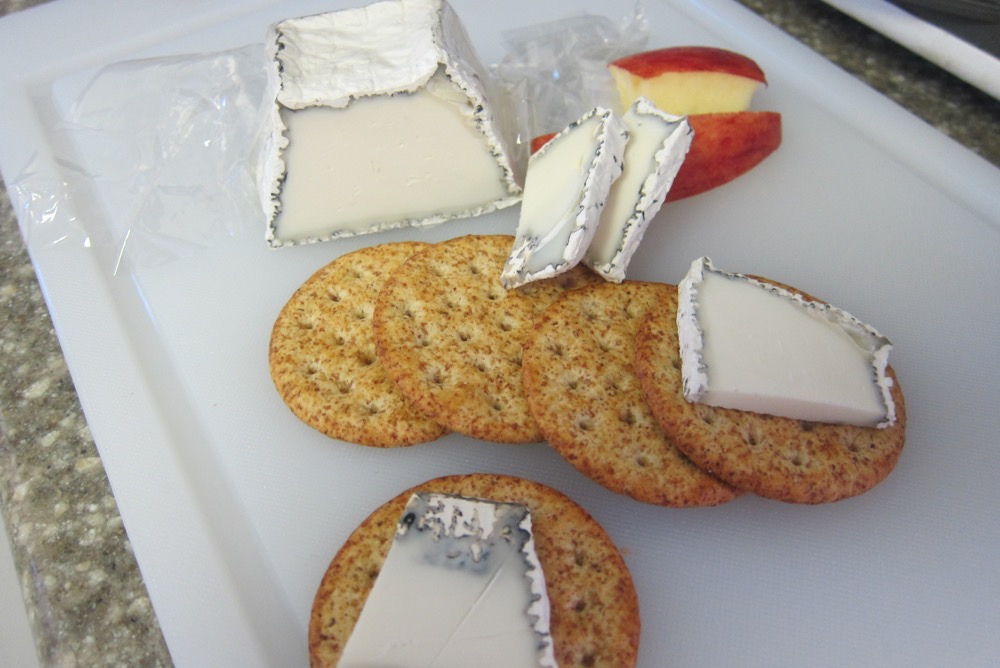 The Ziggurat, at home

I purchased some of it as well as the Ziggurat before heading over to see the pigs. Lost Ruby raises pigs to eat the whey and, well, to provide pork products down the road. They also raise chickens and turkeys as well.

Before visiting, I didn’t quite know what to expect – just as no one knows what to expect when visiting the Canada Area of Connecticut known as Norfolk. But we had a wonderful time as it is a great mix of cute and accessible farm animals as well as delicious and unique goat cheeses. Lost Ruby: a true gem of a farm. 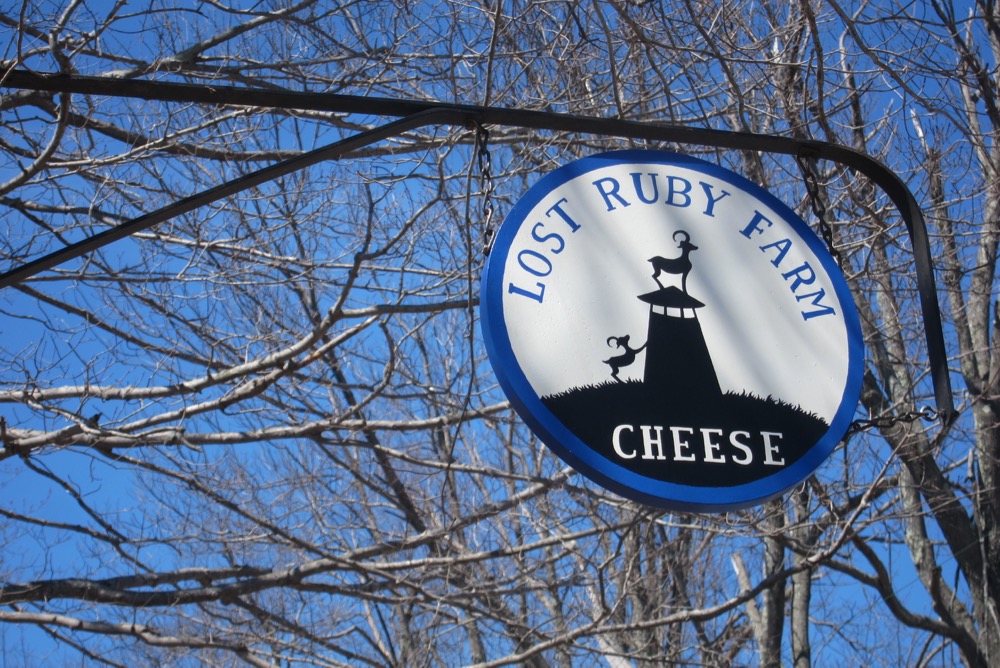