You’ve gotta love Milford. In 1888 the town said, “Hey, let’s build a bridge over the Wepawaug River to commemorate… literally every possible person and thing we can.”

“You mean, like, one bridge to take care of all the town founders and nearby churches and native Americans and the early businesses and then we’ll just add random stuff as it happens over the next couple of centuries?” 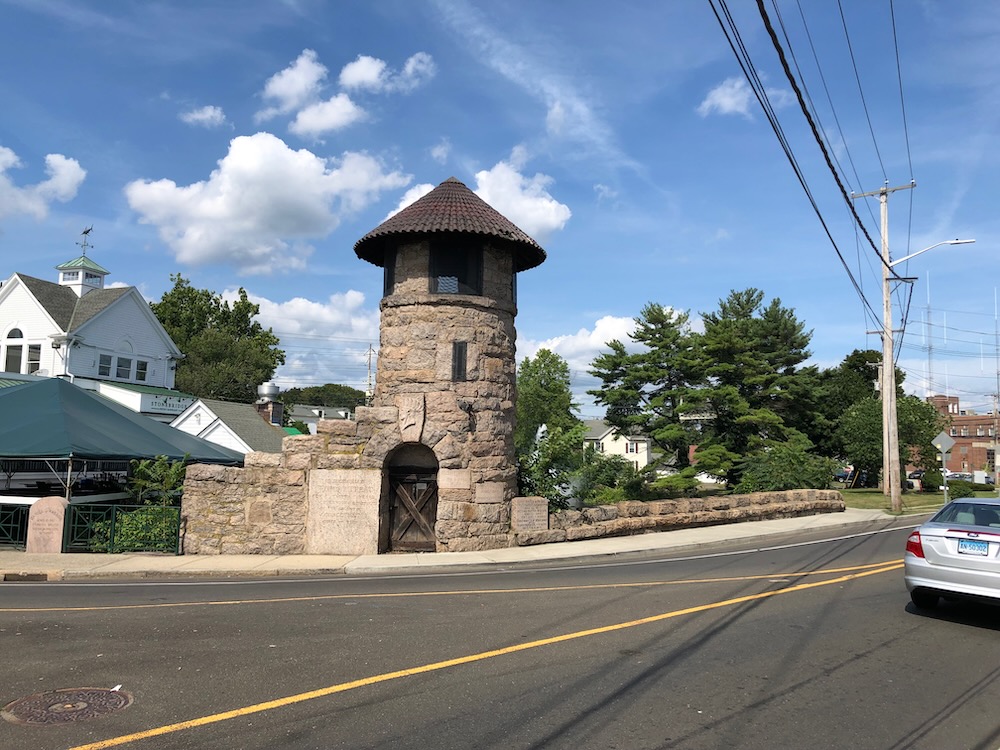 “Yes. Exactly that. There will be lots of granite stones and we can just use them to inscribe stuff or affix plaques.”

And they did. Pretty brilliant. The resulting bridge and tower are an attractive anachronistic centerpiece to a town that doesn’t really have a true center. There are a lot of restaurants near the bridge and people just like to walk across it. So let’s learn about it, because if you take the time to actually look at all the… the stuff here, there’s a lot going on. 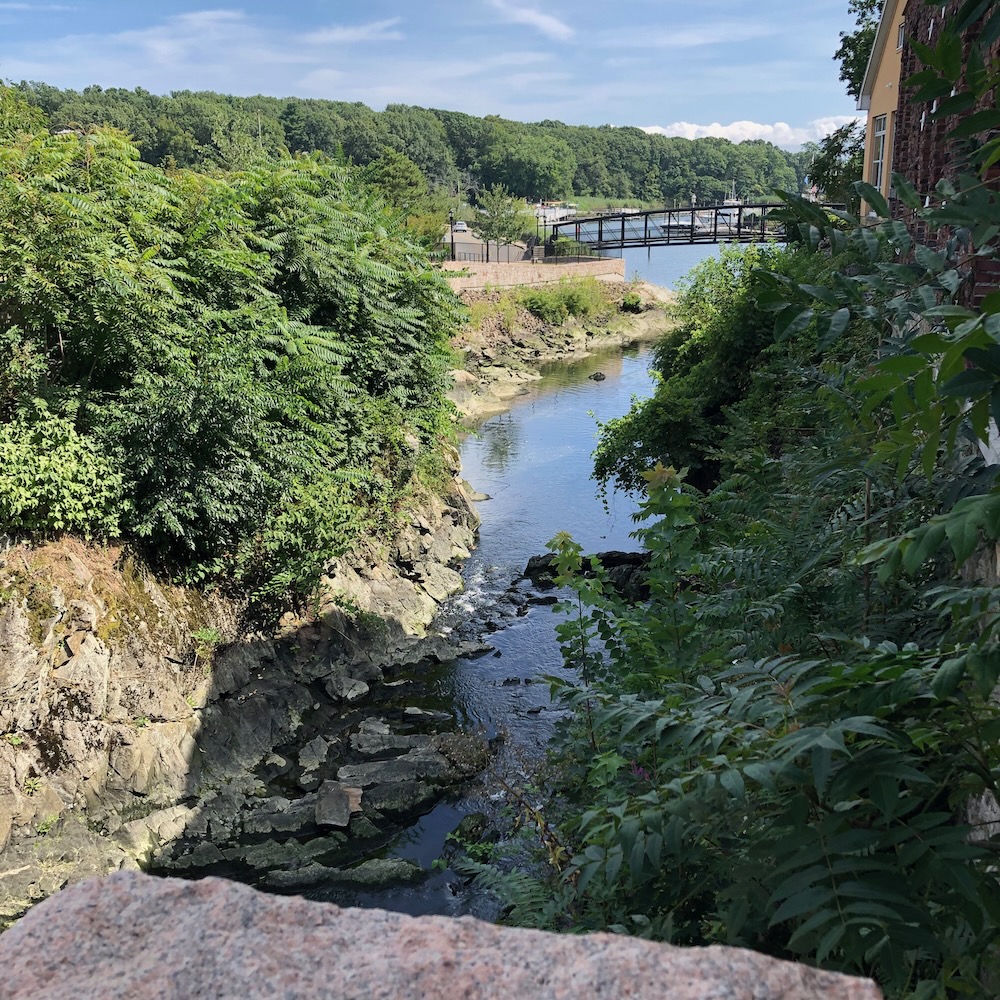 It all dates back to 1888 when Milford celebrated the 250th anniversary of the founding of the First Church. Or the town. I’ve read both reasons; perhaps they were founded concurrently. The bridge is at the site of the last mill over the Wepawaug, which was also the first mill in Milford, which closed in 1894. The bridge was described then as “simple in design, its broad copings surmounted with rough hewn blocks of granite, bearing the names of the first settlers. There are ten blocks on the south and twenty on the north coping. At each end of the former is a stone four feet wide by five and a half high.”

The City of Milford paid $3,000 for the bridge. Not content with just having the founders and the first mill site honored, the first sermon ever given at the First Church can also be found carved into the stone.

Okay, cool. Founders, a mill (a stone from the 1640’s mill is preserved and inscribed in the bridge), and a church. That seems like enough for one little bridge, no? No. 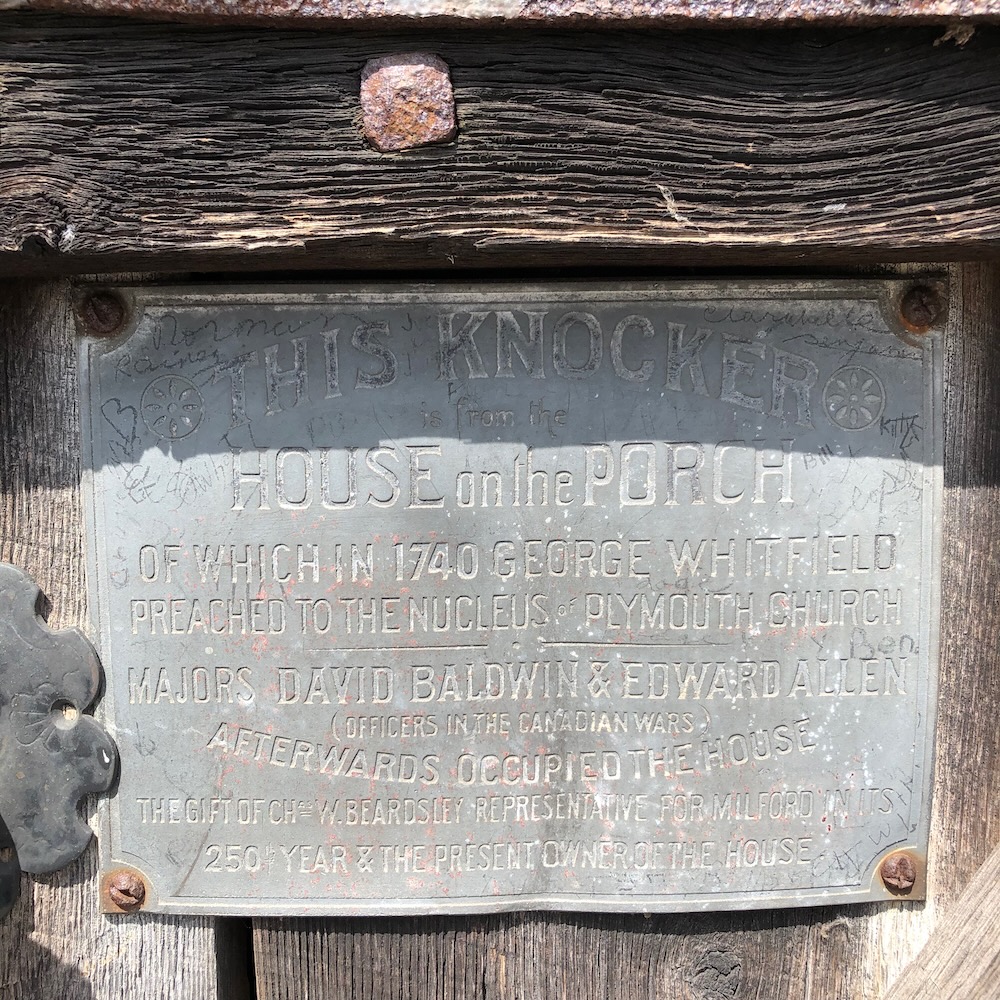 The towers on the west side of the bridge include bow and arrow hinges and knockers on the door to symbolize the signing of the deed for the purchase of Milford from the Paugusset Indians.

Which brings us to the 29-foot Memorial Tower. A tower that, believe it or not, has been on my Connecticut Towers list forever. I had heard rumors that it was accessible once in a blue moon, but I’m not holding out hope. It’s cute little tower. 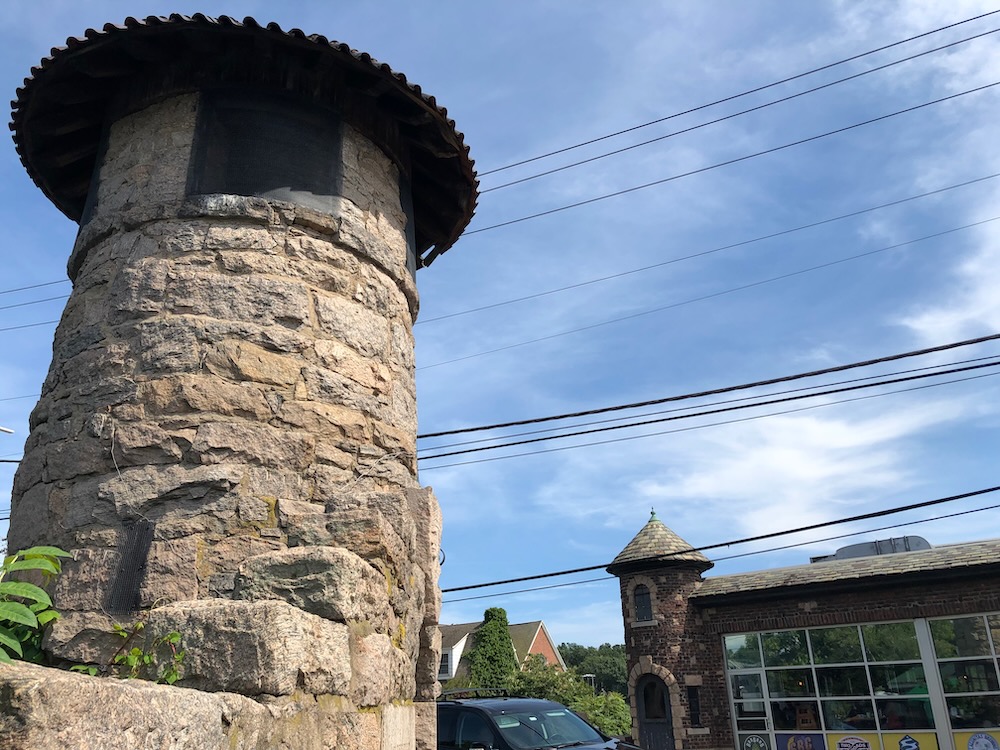 An inscription on the tower honors Robert Treat, a notable early settler and governor of the Connecticut Colony. Over the tower’s entrance is a stylized portrait of a Native American and a representation of the mark of Ansantawae, sachem of the Wepawaug or Paugussett nation, Milford’s original inhabitants from whom the English bought stole the land.

Let’s not forget that a later governor, Jonathan Law, is also honored here with a stone (the former doorstep of his home) on the bridge’s north coping. But back to the tower…

On the doorway, a knocker was taken from the front door of a home with a porch from which George Whitfield, a founder of the Plymouth Church, preached. The doorway also features the hanger for a lantern that has been lost over the years – said to have been knocked off by a passing truck decades ago. 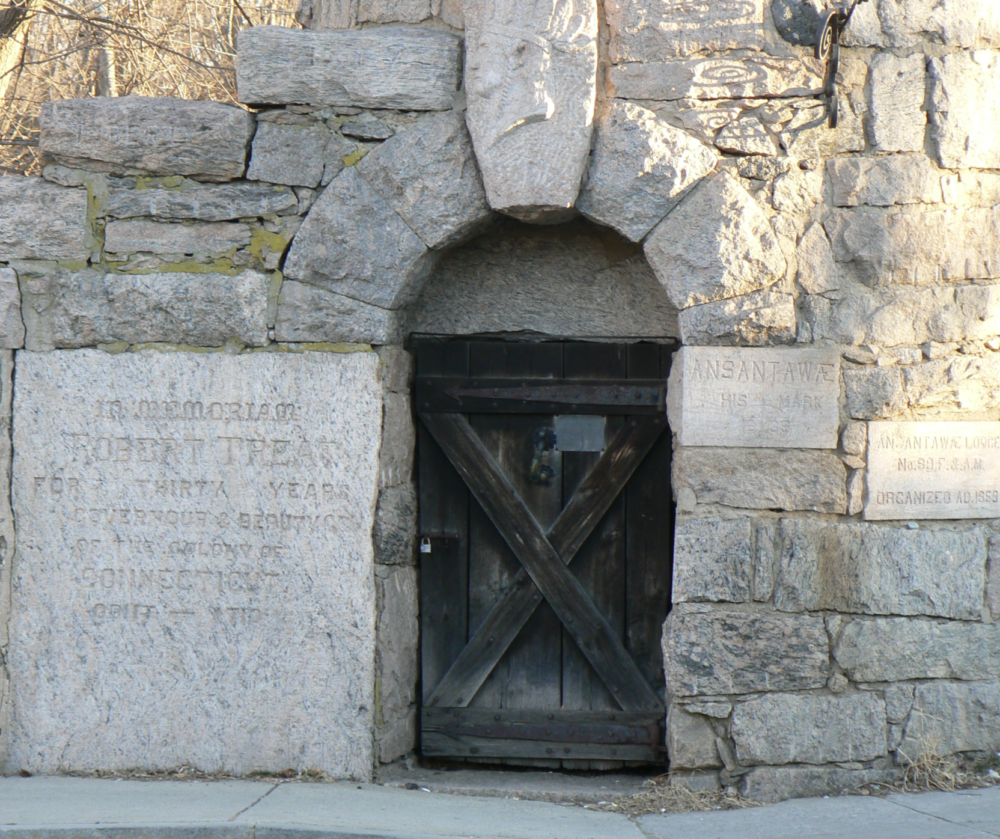 The tower (like most of the bridge) is built from blocks of local Leete’s Island granite and topped with red Spanish tile. I have found an account from someone at The Milford Mirror who was able to access the inside of the tower. I will let that experience serve us all:

“I don’t have any special stories associated with it,” said former city historian Richard Platt. “It’s a place where pigeons would like to roost if there wasn’t that mesh on the top.”

The inside is simply a round opening, about wide enough for one person to stand in the middle, stretch out both arms and nearly touch opposite sides of the wall. The bottom is covered with pigeon droppings and feathers, so even walking into the small space requires a strong stomach and a plugged nose.

Looking up from the inside, one sees the inner stones leading to a narrow window of sorts, and then the underneath of the roof structure. 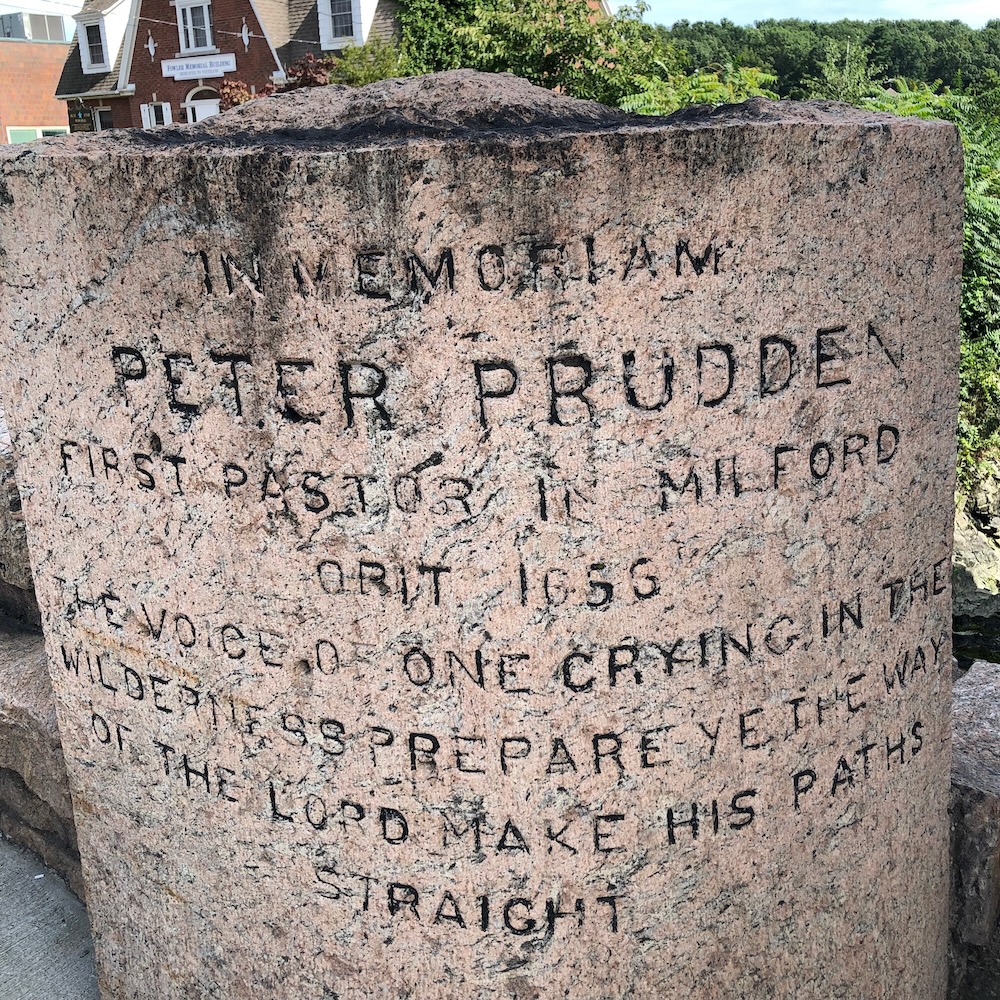 Fair enough. Over the years, Milford has added a few things to the bridge. Like a stone just north of the tower that honors Milford police officer Daniel S. Wasson, who was killed in the line of duty in 1987 during a late-night traffic stop. And in 1999 for the town’s 350th birthday, officials erected a stone plaque listing the names of early settlers who had been omitted from the bridge.

I think I’ve covered everythingFacebook commenters have noted that the stone commemorating the mill is underneath the bridge and there’s a “Founder’s Rock” under there somewhere as well. I’m sure Milford will come up with something they’ve forgotten here somehow. That seems to be their way. 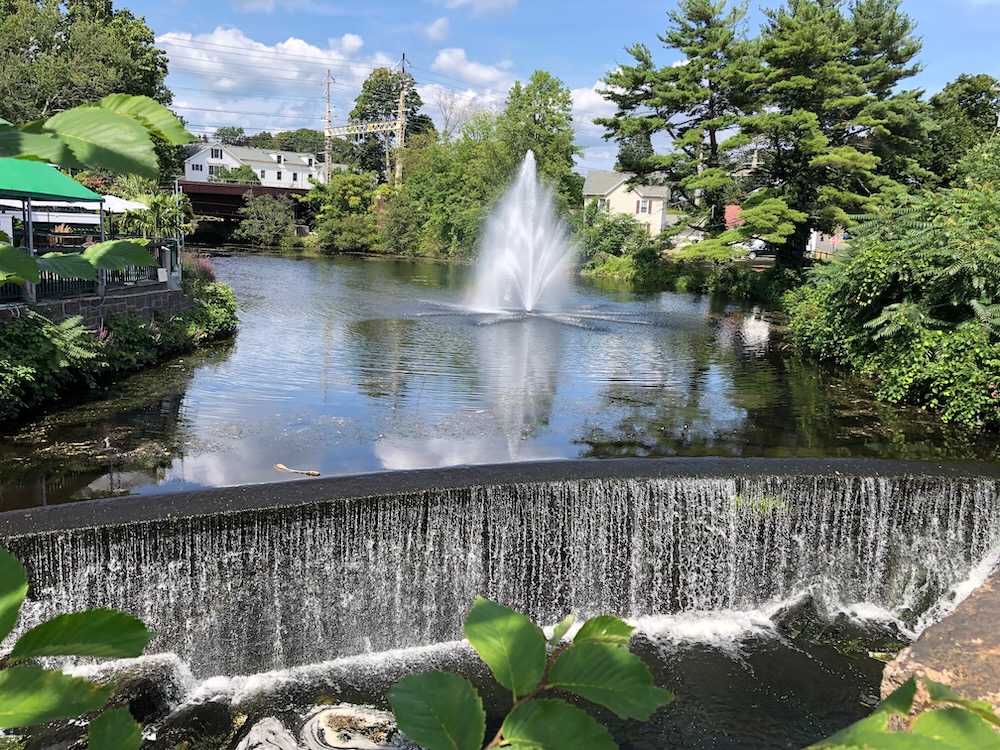