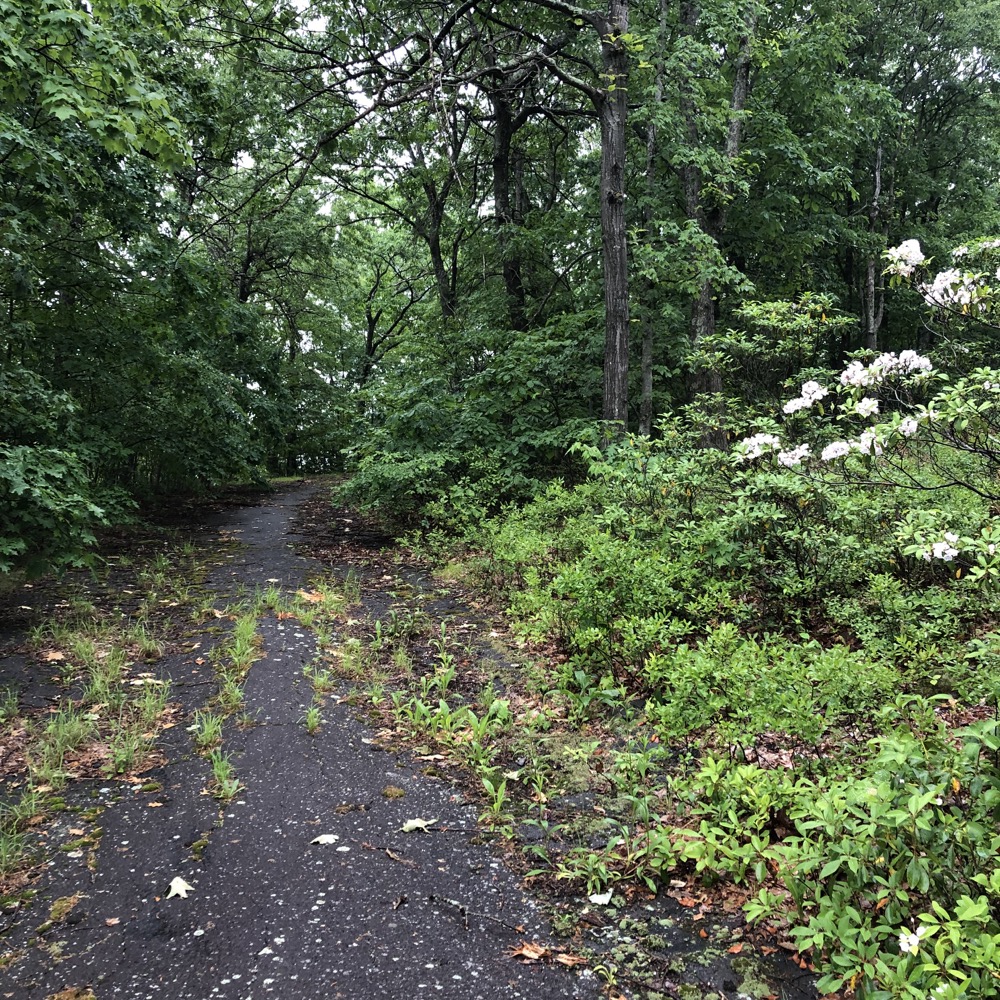 But once you enter their world, you find that that pedantry makes sense. Afterall, these are people who seek to summit the highest point in every county in America (yes, some people have done many hundreds, if not thousands) and that includes pancake flat counties like in southern Florida and other places.

Ever wonder what county highpointers do in flat counties? Of course you don’t. But just pretend you do for a second – they actually summit all potential highpoints. I just randomly looked at Kent County Delaware, as I am a native Delawarean. There are fourteen equivalent highest points in the county. And people who are into this actually try to step foot on all 14.

(I love exposing the dark secrets of pursuits that make my doing and writing all the stuff for this website seem positively normal. Thanks county highpointers!) 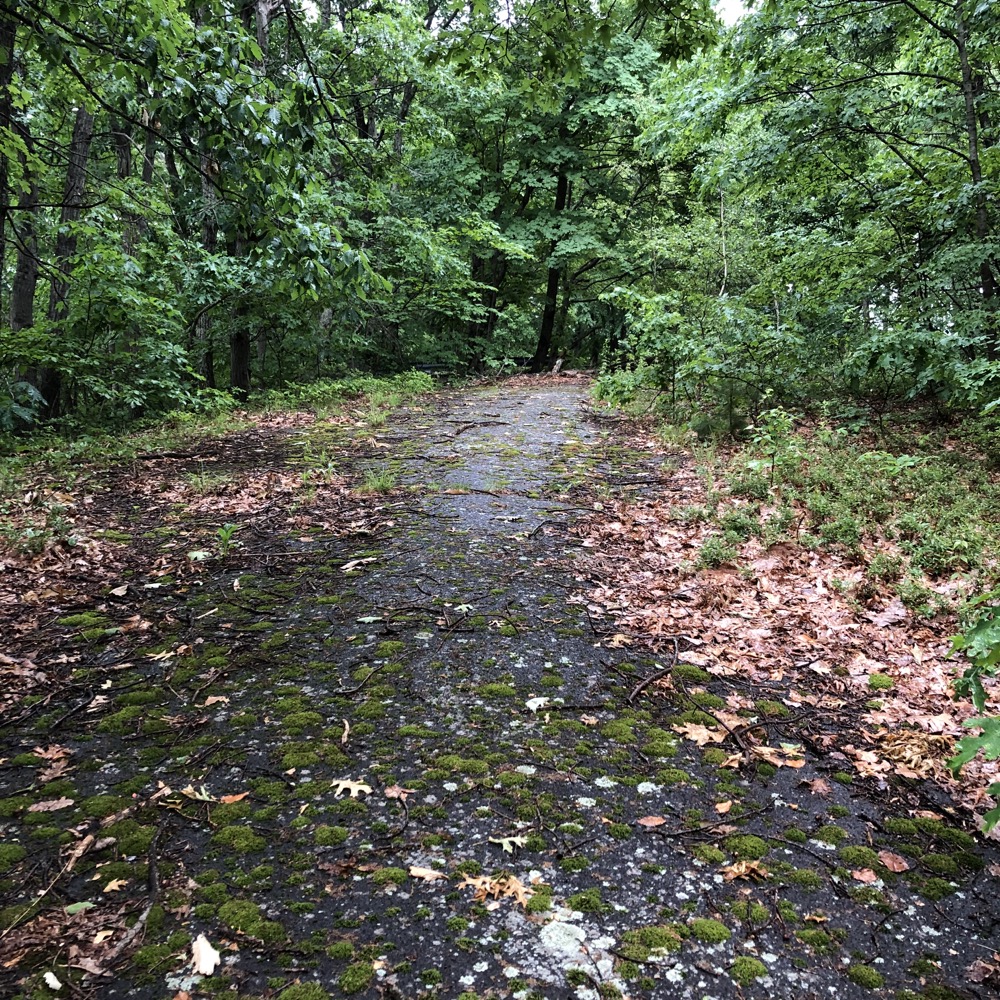 Why am I telling you all this? Because here in Connecticut the New Haven County highpoint is actually two “peaks” in northern Wolcott. Yes, to officially summit the county famous for Yale and pizza, you must walk up to two radio towers behind businesses east of Route 69. Fun stuff.

I approached my trek from Bristol and drove south along Willis Street from near Bristol’s downtown. Anyone familiar with Willis Street knows it’s quite a hill. Like a very real, very long climb. It’s no joke… and that’s Lindsley Hill. Probably. Close enough. From Willis, I scooted over to Route 69 and headed south into Wolcott. 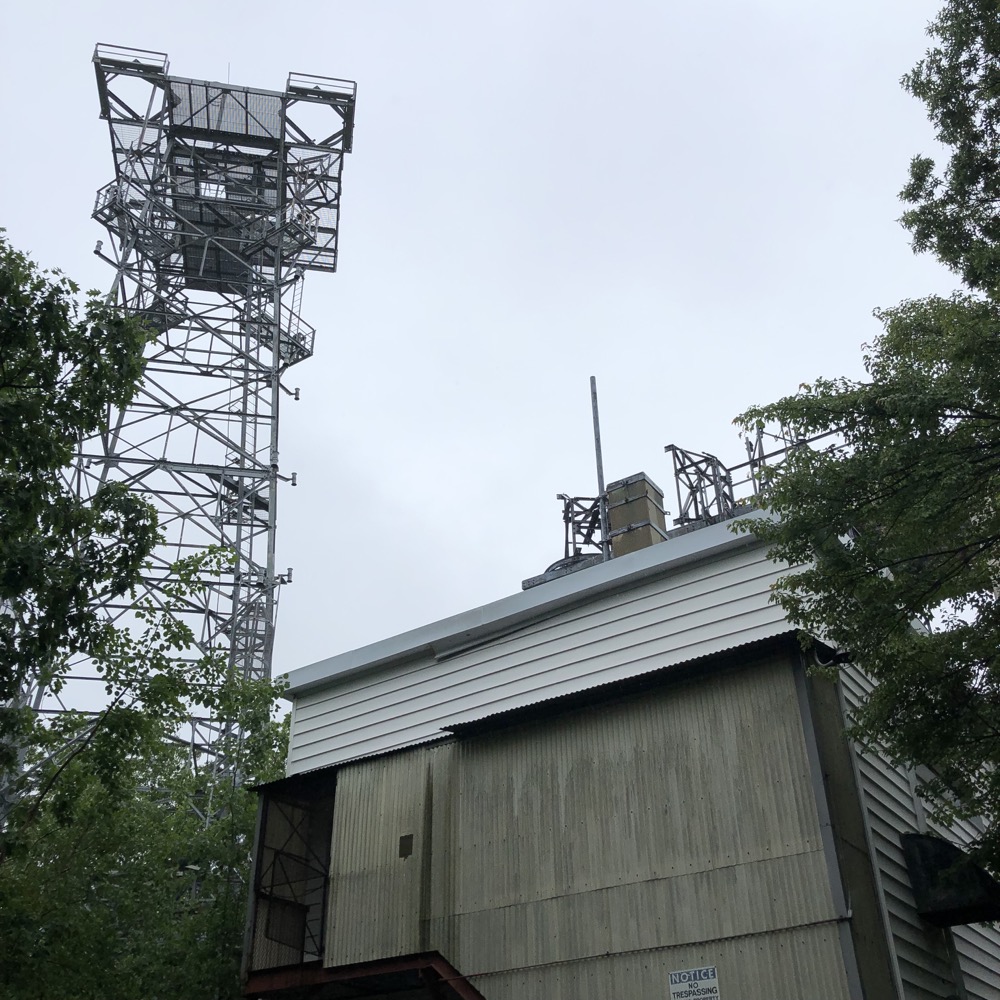 At the northern summit of Lindsley Hill

(It should be noted that Willis Street climbs to over 1,000 feet and may actually top out at a higher elevation that Lindsley Hill in Wolcott but, of course, that would be in Bristol which is in Hartford County which might as well be Jupiter for this page’s purpose.)

There’s plenty of parking for your attack on the highest points in New Haven County. Most of them legal I guess. The climb here is all of 3 or 4 minutes, so you can probably park anywhere. (Or, more likely, not park anywhere here because why would you do this?) 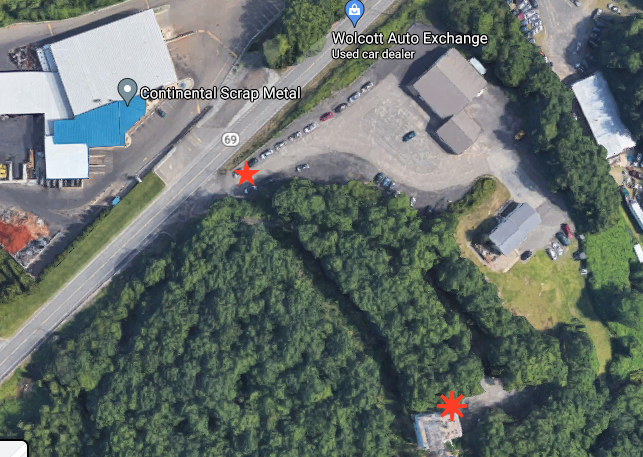 I parked at the star and summited at the asterisk thing

I walked up the crumbling asphalt to the radio tower. The road is covered in a slimey moss and it was actually incredibly slippery in the rain. County highpointing can be very dangerous.

The tower is ugly. I don’t know what its true function was or is, but the vagrants have wrecked the place. There was a smashed toilet inside a small room that said – well, here: 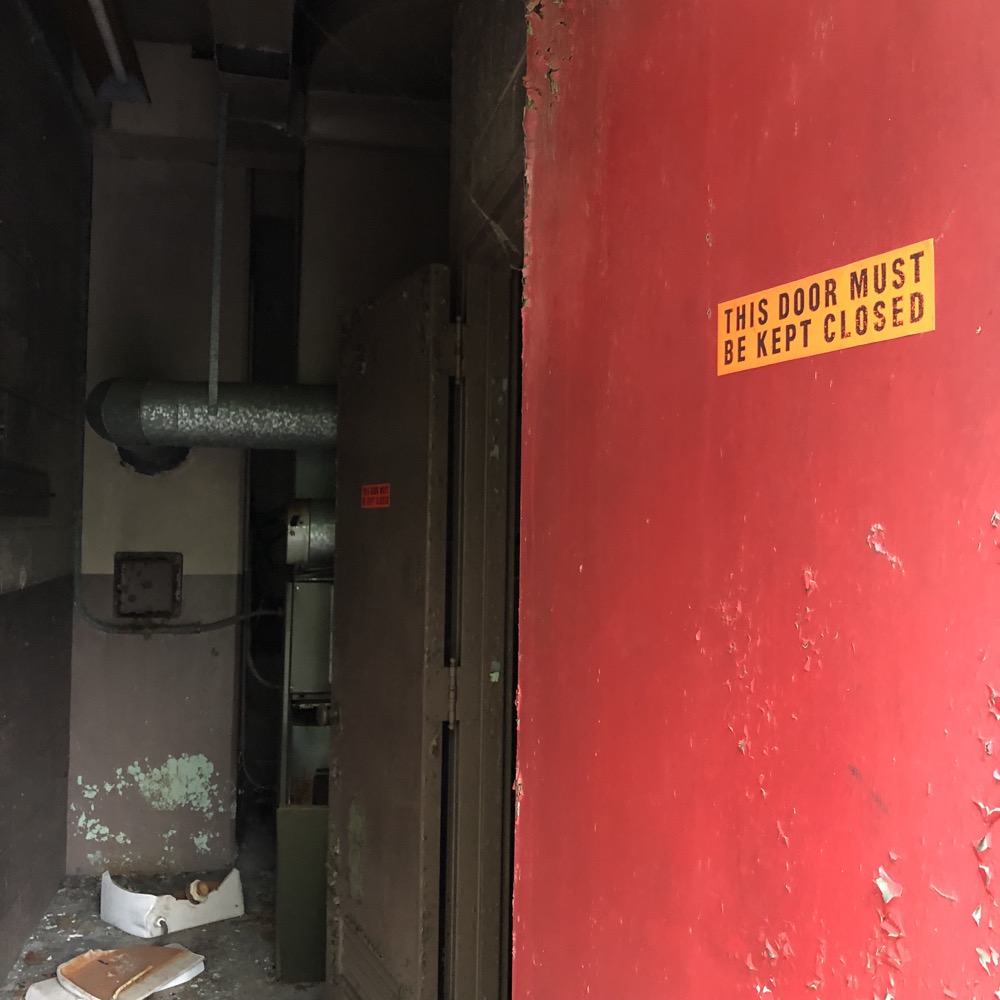 I walked around the bump and found a boulder that appeared to be the highest point. I took a moment to revel in my achievement and slid back down the old access road to my car. Of course, I was only halfway towards my highpointing goal.

You almost have to go up and down the two points from Route 69 because there are houses and yards between the two. I’ve read trip reports from people who have cut across, but I don’t recommend that at all. It’s easy enough to walk down the road or, as in my case, make the 300 yard drive to another parking area. 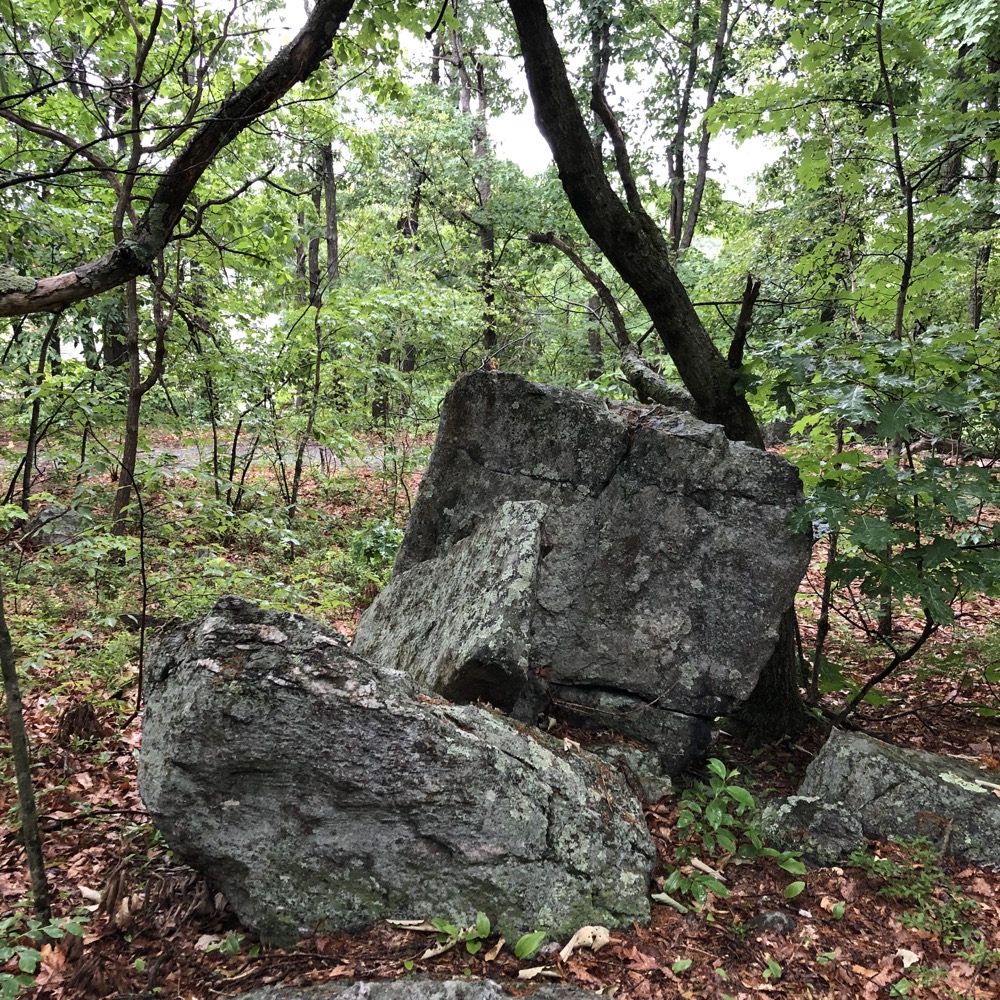 The probably highest point boulders at the northern peak

The businesses along this stretch have changed over the years. I’ve read about hobby shops and golf driving ranges. That hobby shop has morphed in Ground Zero Airsoft (where people play Army) which is cool and all, but as I saw dudes in camo gathering, it occurred to me that they may be running around shooting the little Airsoft pellets where I was about to walk.

I parked and just went for it. If I was to get shot with a little plastic bb, I’d get shot doing something I love. Tell my family I love them. 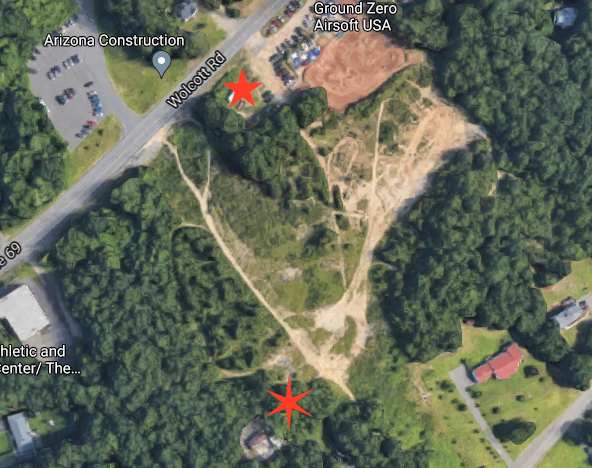 I parked at the star and summited at the asterisk thing 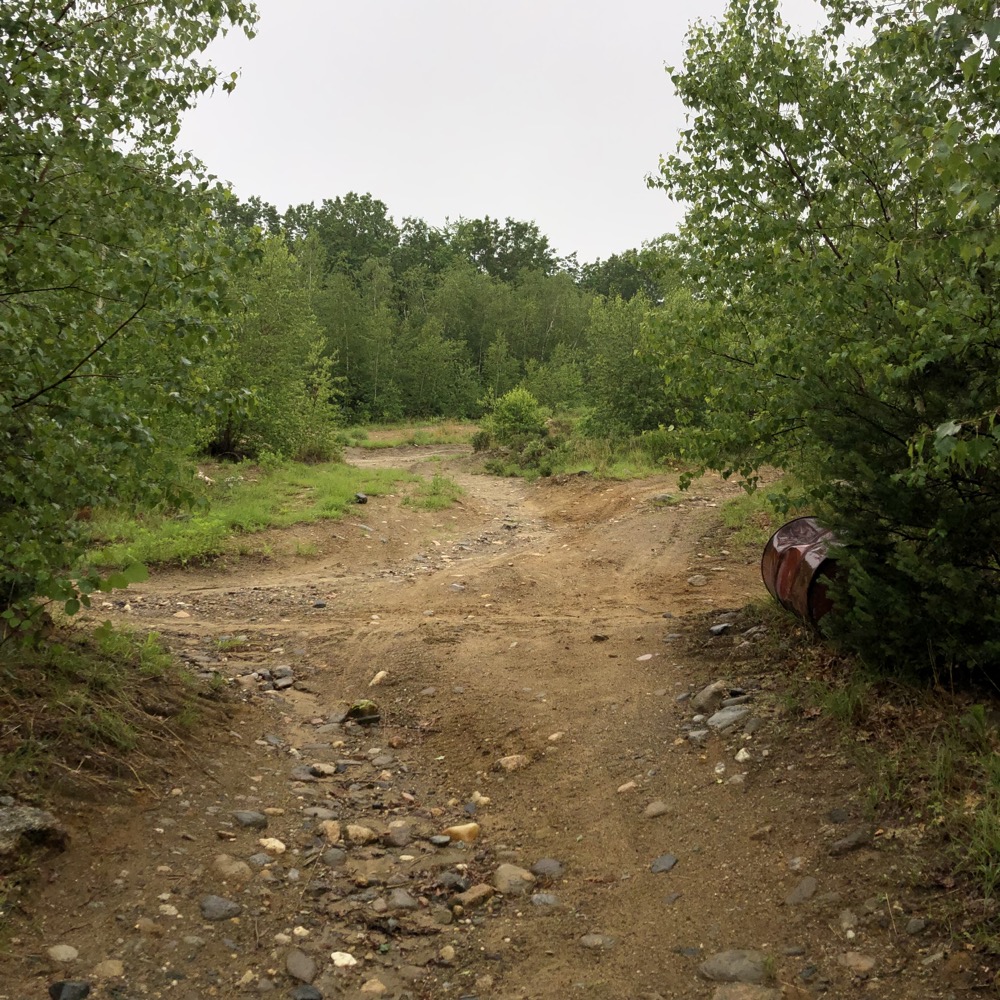 The initial ascent of the southern peak

The ground here is sandy and the area is littered with oil drums and other junk. I assume these are Airsoft touches of warfare realism. I made my way uphill south east towards the massive powerline cut. I looked back for fake Army guys, but they hadn’t gotten started yet.

On the other side of the powerlines, there’s another radio tower up here, but this one is fenced in securely and seems to be operational. To be honest I’m not really sure where the true highest point here is, but I wandered all around the area looking for a benchmark that is said to exist. 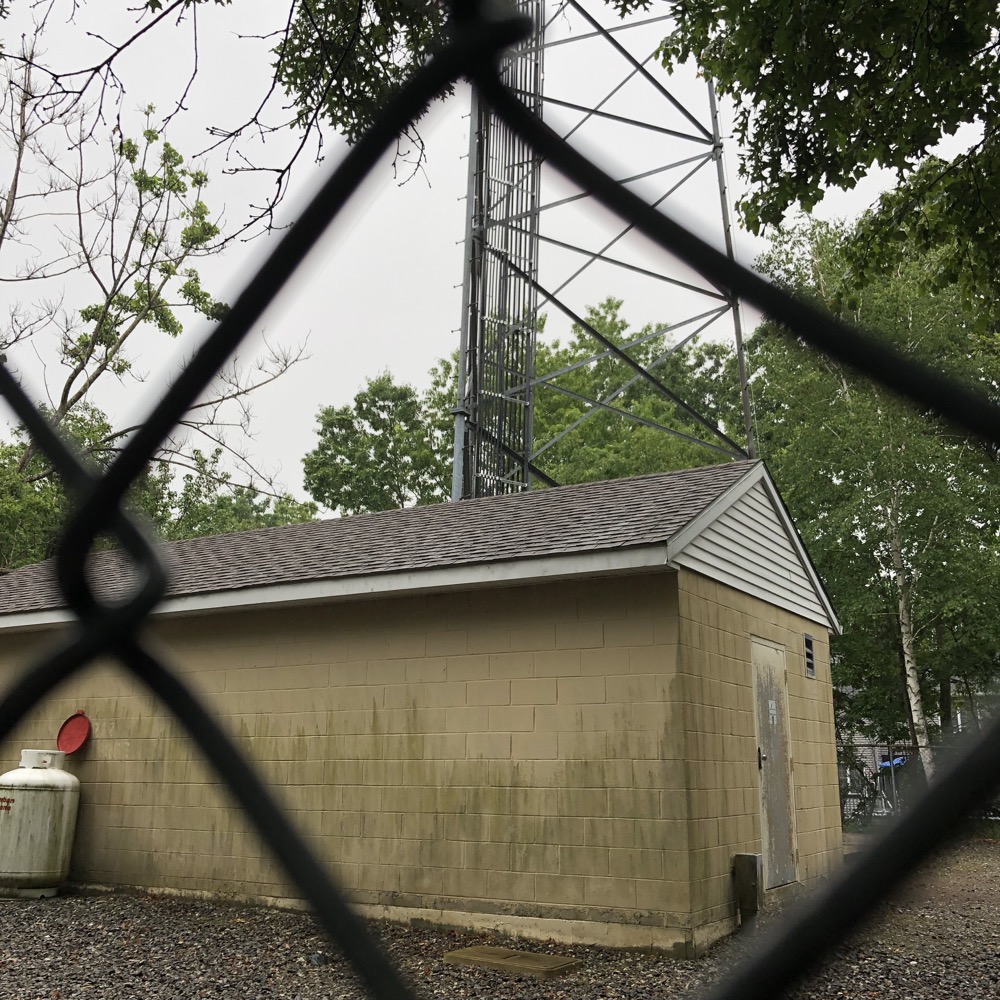 Tower at the southern summit

I did not find it. But there are a few clumps of boulders here and there – and I’m calling them the highest point in New Haven County… except it’s generally accepted that the first summit I went to is a bit higher. Lots of leveling and clearing has gone on around this southern summit and I suspect the topography has been changed.

I really didn’t want to hang out too long looking for something that may no longer exist though. I trudged back underneath the (very loud!) powerlines and back down through the Airsoft warzone and made it safely back to my car. 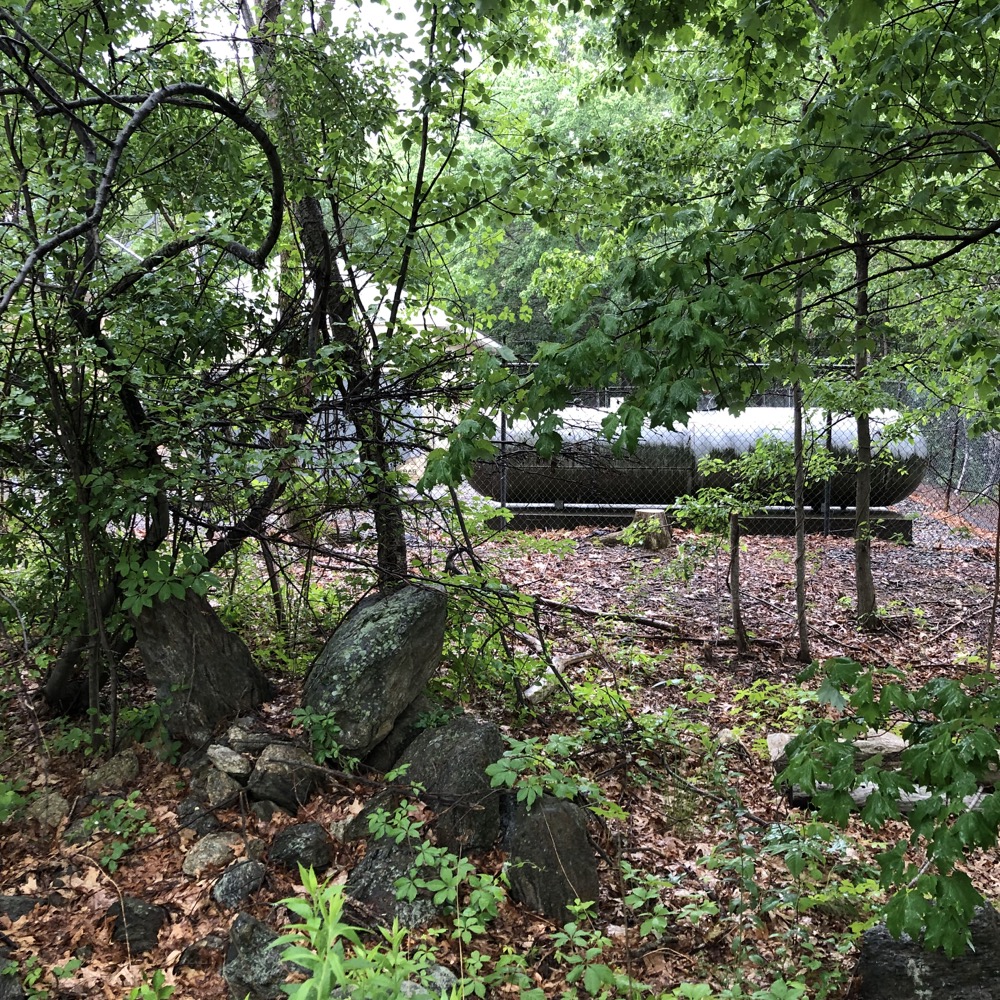 The probable highest point at the southern peak

The Airsofties were still staging in the parking lot and didn’t even notice the dorky county highpointer guy in shorts and a tee-shirt in the rain getting into a little Japanese car who clearly was not part of the group gearing up to go shoot each other. I zipped off to my next destination and didn’t look back. 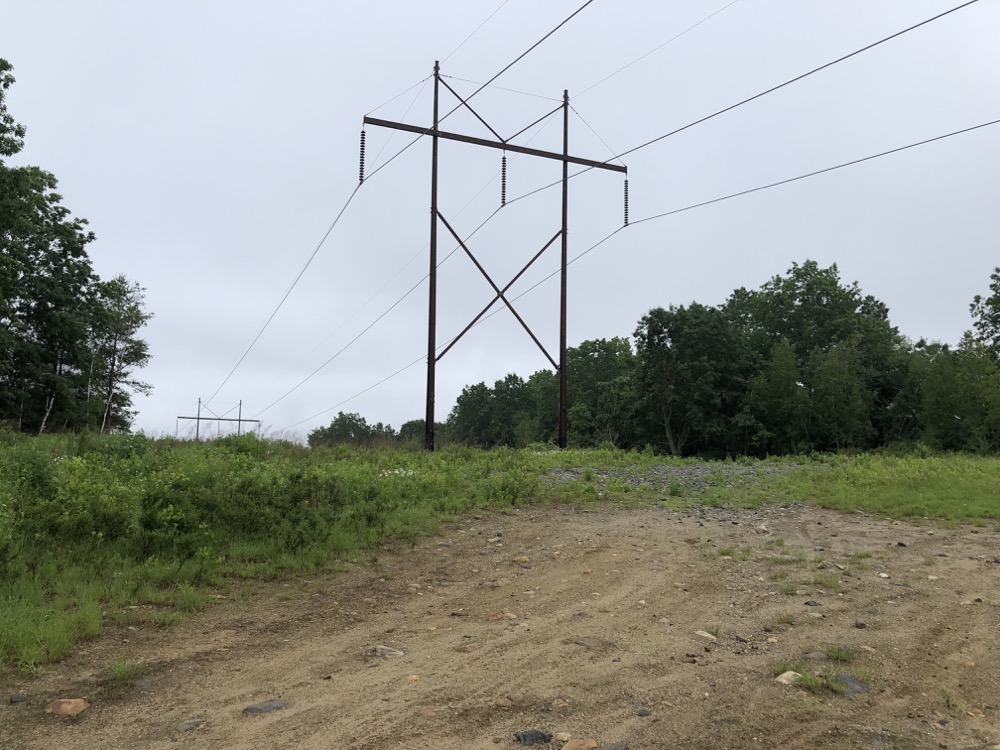