It sure is nice to live in a state which arguably has the best pizza in America. I usually get no argument when I say that except in New York City. Elsewhere, they just look surprised, make some lame effort at talking up their local pie, and then go crawl away once I ask them to Google various “Best Pizza” queries and Connecticut pizzerias keep popping up over and over again. 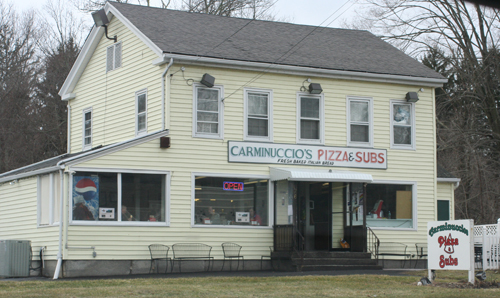 Hoang and I recognize our good fortune and we actually do feel quite sorry for anyone who lives anywhere where they can’t get their hands on a crispy thin crust New Haven style pizza. Heck, it appears that where I grew up, all they have on offer is Papa John’s and Dominoes. That just makes me shudder and cry.

Connecticut pizza is so good, and it’s properly getting the recognition it deserves from all quarters. And I’m here to eat it all. Which brings me to a rather nondescript stretch of road out in Newtown. There, I stopped in to Carminuccio’s after a nice hike in Bridgewater on a Sunday afternoon to pick up lunch: a large veggie pizza. Roadfood raved about this place and I have to admit, I was skeptical at first… But not after I took my first bite… 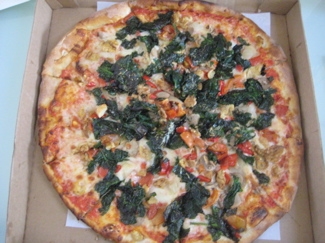 We slightly disagree with Carminuccio’s motto, which is “A Little Slice of Heaven.” We say it is a quite a large slice of heaven. In Connecticut, home of America’s most delicious pizzas, this house by the side of the highway serves some of the very best.

When you walk in, it doesn’t seem much to look at. The interior consists of an order counter and a small array of bare-topped tables. But look closely, and towards the back you see the breads of the day arranged in a case. It’s a beautiful sight. Carminuccio’s makes not only its own very wonderful Italian bread for submarine sandwiches (the steak and cheese is grand!), but also stuffed breads: long savory loaves wrapped around such ingredients as ham or capicola, pepperoni and cheese, broccoli and sausage. Served steaming hot, one of these breads is a soulful meal every bit as satisfying as a pizza.

As for pizzas, the Carminuccio repertoire of toppings ranges from basic cheese to escarole & beans, barbecued chicken, sautéed spinach, and a knock-out “BLT” combo of pesto sauce, bacon, cooked escarole, and roasted tomatoes. Each pie is made to order; near the cash register, you can watch the pizza man stretch the dough ultra-thin and slide it into the ovens. About ten minutes later, out comes a pizza that has a chewy rim of crust all around the circumference and a brittle undercrust with just enough grit from the oven to give it real character. 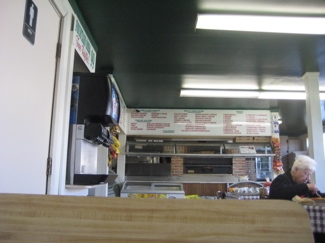 Eddie Martino, who runs Carminuccio’s, grew up in New Haven eating New Haven pies; so it is not completely shocking to taste one of the roasted garlic pizzas dished out here and recognize you are eating greatness. Carminuccio’s merits are a sturdy crust and especially full-flavored vegetables on top. Before going onto the pizza, the veggies are cooked in a convection oven, sapping crust-threatening moisture and also enhancing the flavor of such toppings as spinach, onions, and tomatoes. Garlic is caramelized by the process, each whole clove turning soft, as all its sharp taste turns tender. Garlic goes well with just about any other topping, but there is no match better than red peppers, which have been roasted to a sunny concentrate as vibrate as sun-dried tomatoes.

After reading the above, I decided to go with their standard Veggie Pizza – red sauce, mozzarella cheese, mushrooms, eggplant, spinach, onions, peppers and roasted tomatoes. It seemed to hit all the highlights Roadfood suggested and it would be a true test. After all, veggie pies are usually piles of soggy mush. If this place was as good as promised, it would be a first for us.

And throw in the fact that I had a 40 minute or so drive before eating it and man, I was putting Carminuccio’s under the ringer. 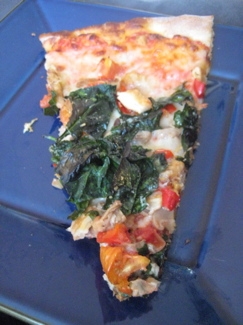 I called ahead so my wait was only a few minutes. Just enough time to learn about the history of this place: Carminuccio’s opened in 1997 quickly becoming a favorite pizza spot in upper Fairfield County. Carminuccio’s uses the freshest and finest ingredients. The dough is hand stretched, a technique passed down through generations from the old country creating “A little slice of heaven”. Their pizzas are created with the finest, freshest ingredients and our dough is hand stretched in the style passed down through generations from the Old Country. 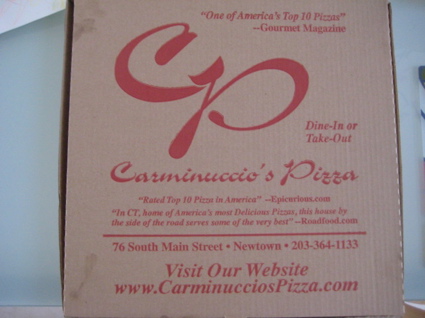 They were a Top 10 pizza in America according to Gourmet Magazine.

I sped home as fast as I could, ripped open the box and reheated a few slices in the oven. Amazingly, the crust DID hold up to all the veggies and my pizza was whole and intact after the drive.

Man oh man, this is phenomenal pizza. The crust stayed crispy, the ratio of the various veggies was perfect… Everything was perfect. Seriously. I was in awe.

Now I know where we’ll be stopping in the future whenever we’re hungry in the Newtown area. 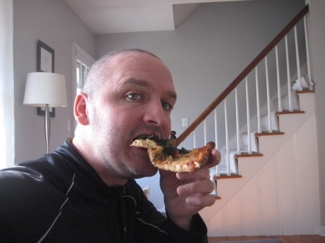