I Knew a Girl at UConn Named Brooke and she was Loud
Roaring Brook Nature Center Cascades, Canton
October 22, 2013

I like a good waterfall that’s not too far away from my house. Too bad the “falls” here at Roaring Brook are pretty weak. But to be fair, the guidebook I’m following does call them cascades and not falls. And to be even more fair, I was here after many, many dry months.

Also, who cares – they are still really pretty and very accessible too. 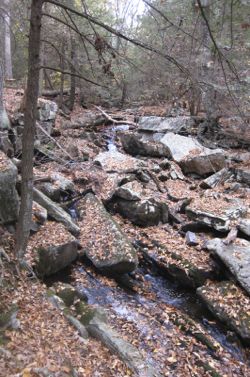 You would be well-served by reading my page about the hikes over at the Roaring Brook Nature Center. The walk to see the various falls/dam/cascades is quite nice, but it will require a little effort; at least on your return trip to the car.

Basically, park at the nature center and go behind the building, past the bird/animal cages and find the red-blazed Werner Trail. Take the left path and follow along Jim Brook, past the pond and then over the dam.

Believe it or not, the water flowing over this dam is noted as one of the “cascades” or falls in the Connecticut Waterfalls book I’m following. To see the dam from below, take the light blue (Dish Mill) trail down the steep bank to the bottom.

Follow that trail and you’ll pass another dam falls; this one over an old mill dam. Keep going. It’s pretty, right? When you reach the yellow (Quarry) trail, take it, cross a road and take the left branch, continuing along the brook. 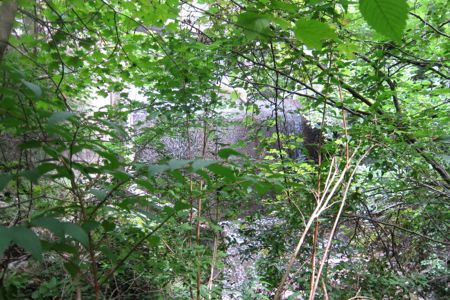 Dam falls though the leaves

Even though there is a road and houses nearby, I found this mini-gorge very nice. Here is where you’ll find a series of cascades. Enjoy them. Enjoy them NOW.

Anyway, if you continue on the trail, you’ll come to an abandoned quarry. This was owned by the Collins Company (also in Canton) and apparently some of the stone from here was used in the rather large dam in Collinsville. Which I think is pretty cool.

You can finish out the yellow loop and head back up the brook to your car – or explore some of the other trails. It’s up to you. I don’t care. Whatever. Waterfall nerds. 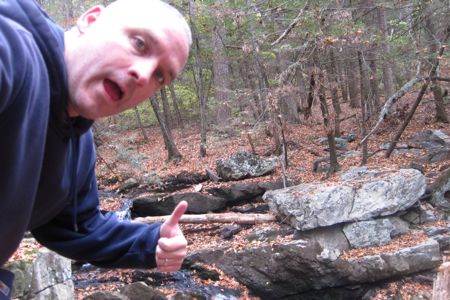 By the way, there is nothing around here named “Roaring Brook” other than the nature center. The brook you’ve followed here is, as I wrote, Jim Brook. It’s named after James Baltimore, aka Jim Bell, who lived in Canton around 1774 and whose tenement was reputedly a resort for blacks.

Which is mildly interesting.