In case you’re curious, Maltby Lakes was my very first RWA hike, 14+ years after I began this website. The RWA properties have always been this mysterious, rarified collection of places that I knew existed but never made the effort to check out. 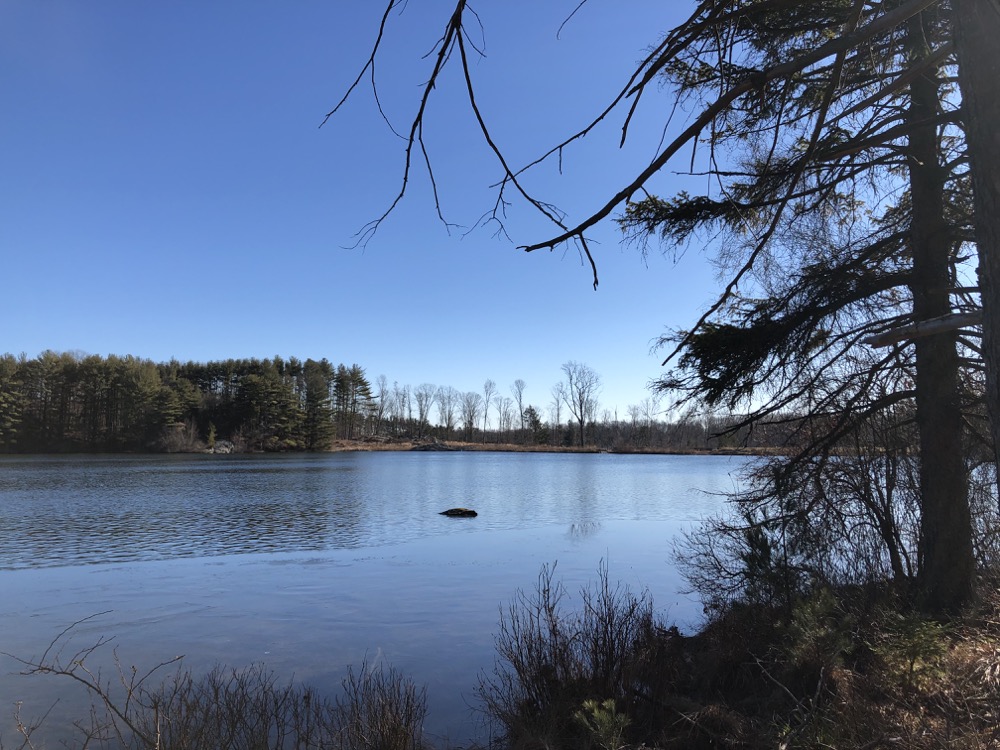 Granted, other trails and trail networks traipse through these fancy lands, but most interlopers are none the wiser. And yes, surely you can access them via side trails and rogue parking areas if you must. For the rest of us rule-abiding citizens, we purchase our annual (or more) permit, access the proper parking areas through the locked gates, display our parking passes on our dashboards, and hike without guilt.

And besides, I’ve never heard people complain about the RWA like we constantly do about the Metropolitan District Authority around where I live. (The MDC is a criminal organization run by a felon, but you knew that already.) Yes, the MDC properties are “free” (and wonderful), but they get plenty of money from their captive customers. Trust me. 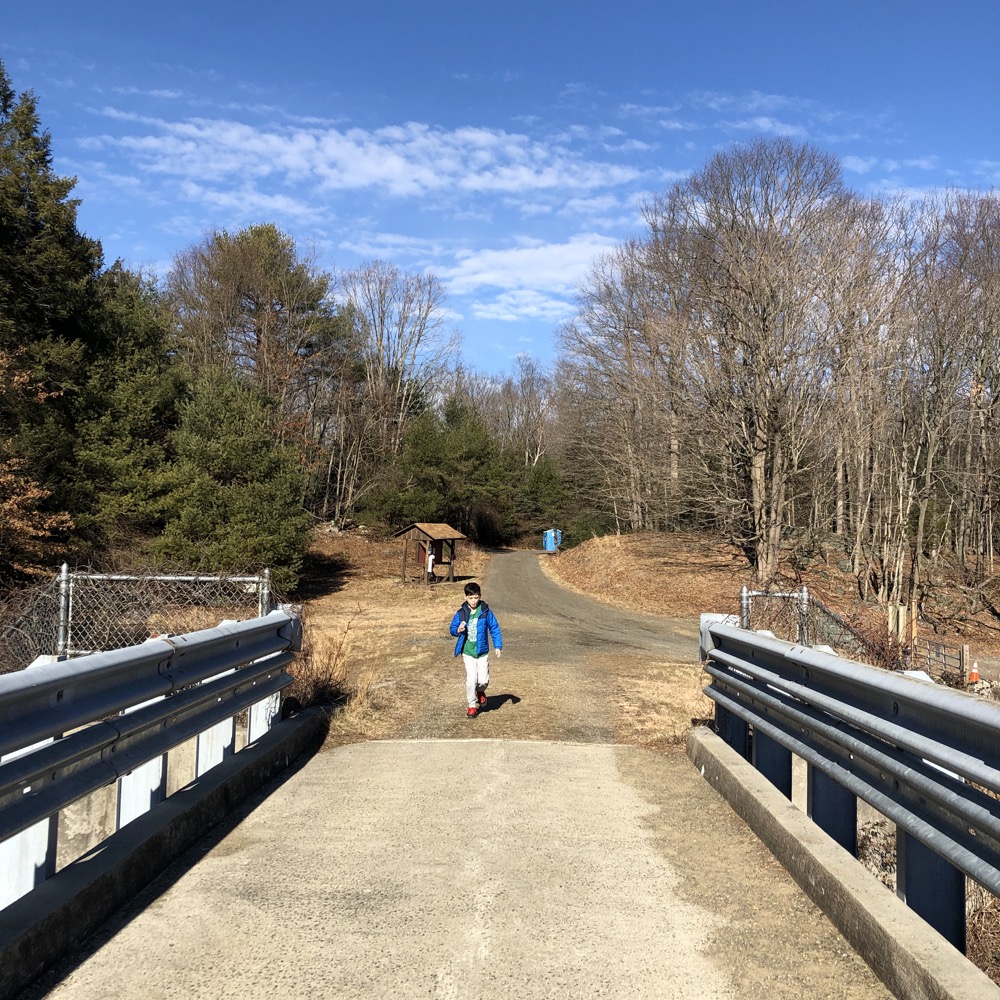 I fear I may have been spoiled by hitting up Maltby Lakes first. This place is beautiful – will the other RWA properties match up? Time will tell, but it’s a tall order. I accessed the parking lot via the nearly hidden gate and road off of route 34. It’s in the middle of that weird part of 34 that turns really pretty for a minute in between the commercial areas of West Haven and Orange. It has the wide, treed median and, well, Maltby Lakes. That this is mere minutes from Yale’s athletic fields and the Westville section of New Haven is sort of mind-blowing. 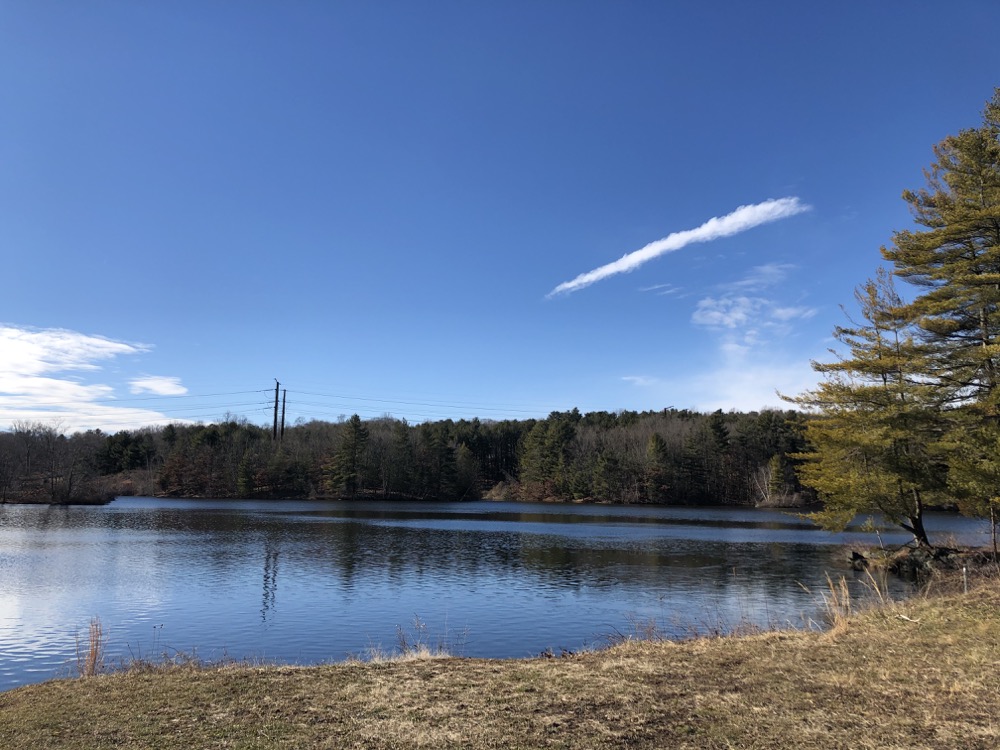 The Maltby Lakes – there are three, named 1, 2, and 3 – aren’t actually a water source for New Haven or anyone anymore. They were originally constructed as reservoirs, but with a cool twist: Back in the 1860’s, Caleb Maltby had plans to combine water supply and public recreation at the reservoirs he created for the Fair Haven Water Company, according to the RWA. Sure, it took about 125 years for the recreation part of his vision to happen, but hey, it happened.

Yes, the original outfit sold the property the New Haven Water Company, which owned it for 100-plus years before selling it to the RWA in 1980. And 14 years later they opened it up to you and me. And here we are in early 2021, hiking it. 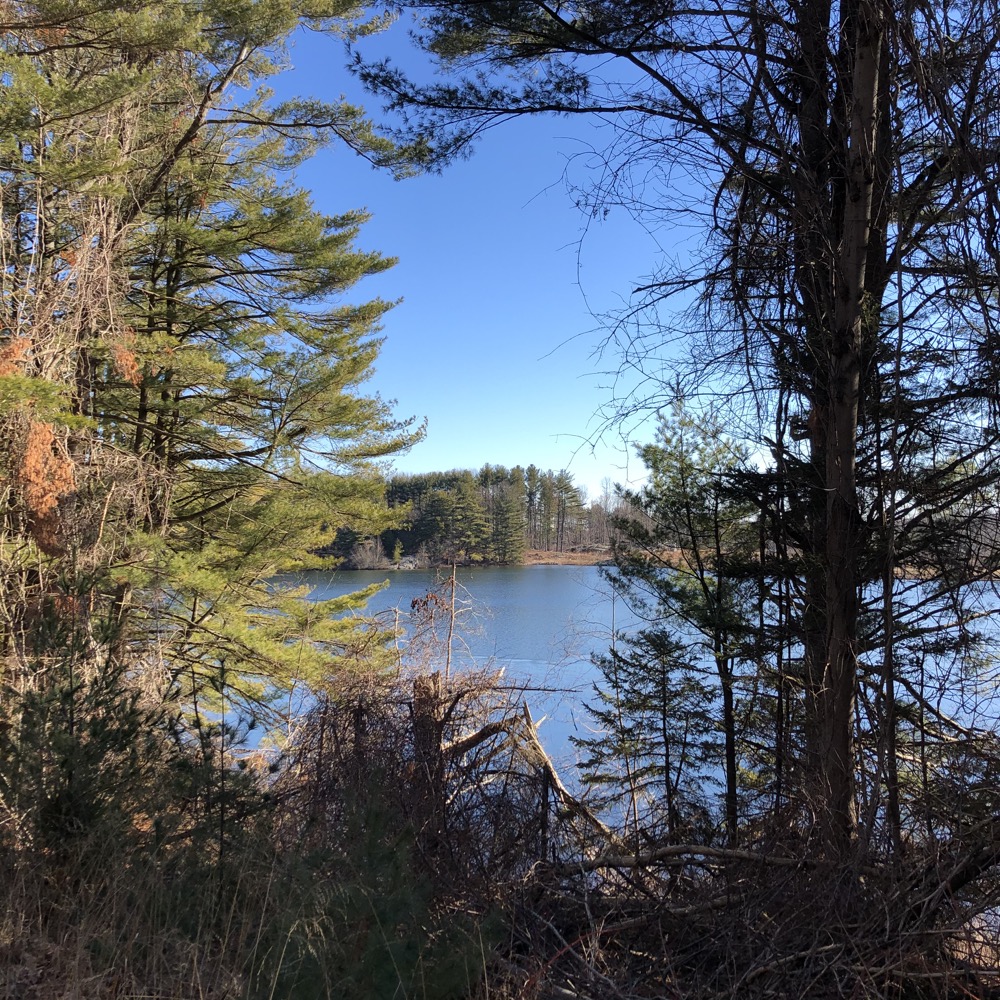 Every trail here (like many trails at RWA properties) is more of a dirt road. Or a tote road. Or a woods road. Or a fire road. Whatever you want to call them. They are wide and mostly passable by high clearance vehicles. It appears the RWA sells woodlot permits to any old schmoe if they want to come and cull dead ash trees for firewood. But don’t let that deter you – woods roads can be just as nice as a trail trail. I’ll be referring to the roads at all RWA properties as trails simply because the RWA does the same. 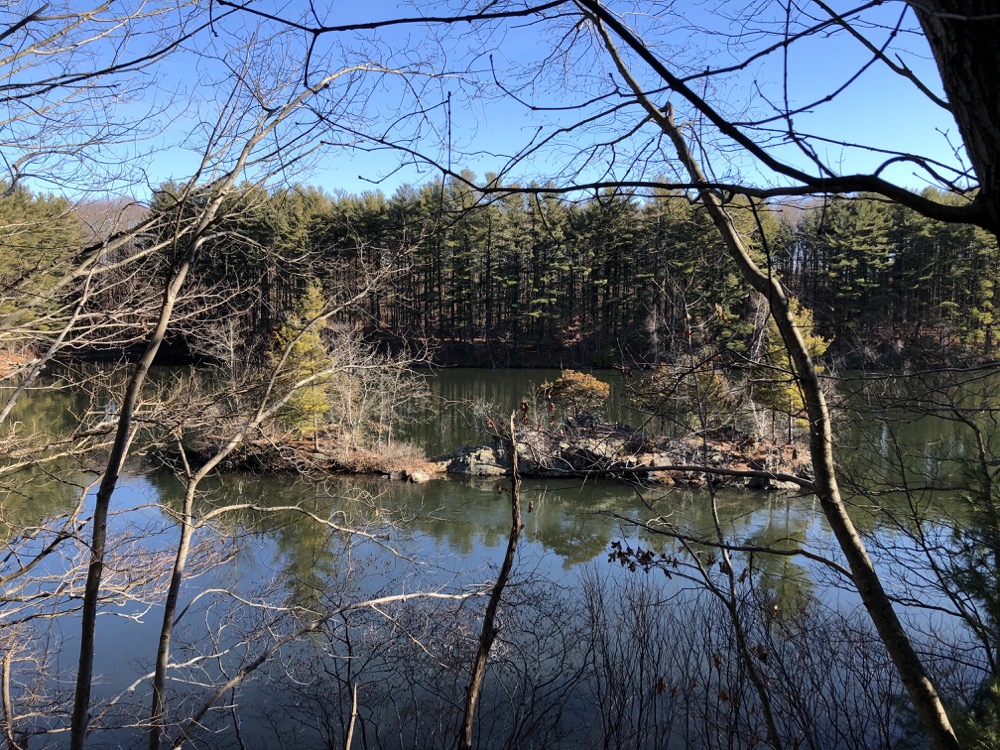 The main 3-mile trail is blazed white and is named after one Mark Schaefer. I don’t know who Mr. Schaefer is or was, but I’m sure he was pretty cool. This trail can be used as a jumping off point for any of the other trails here. Calvin and I began heading north on it, generally between Lakes 2 and 3.

We reached the yellow-blazed Mil Deprey Trail and we decided to take it because I’d remembered reading that it featured some “cool rocks” I didn’t remember what made these rocks cool, but I said it once to Calvin and he became obsessed with finding these things. Goals. 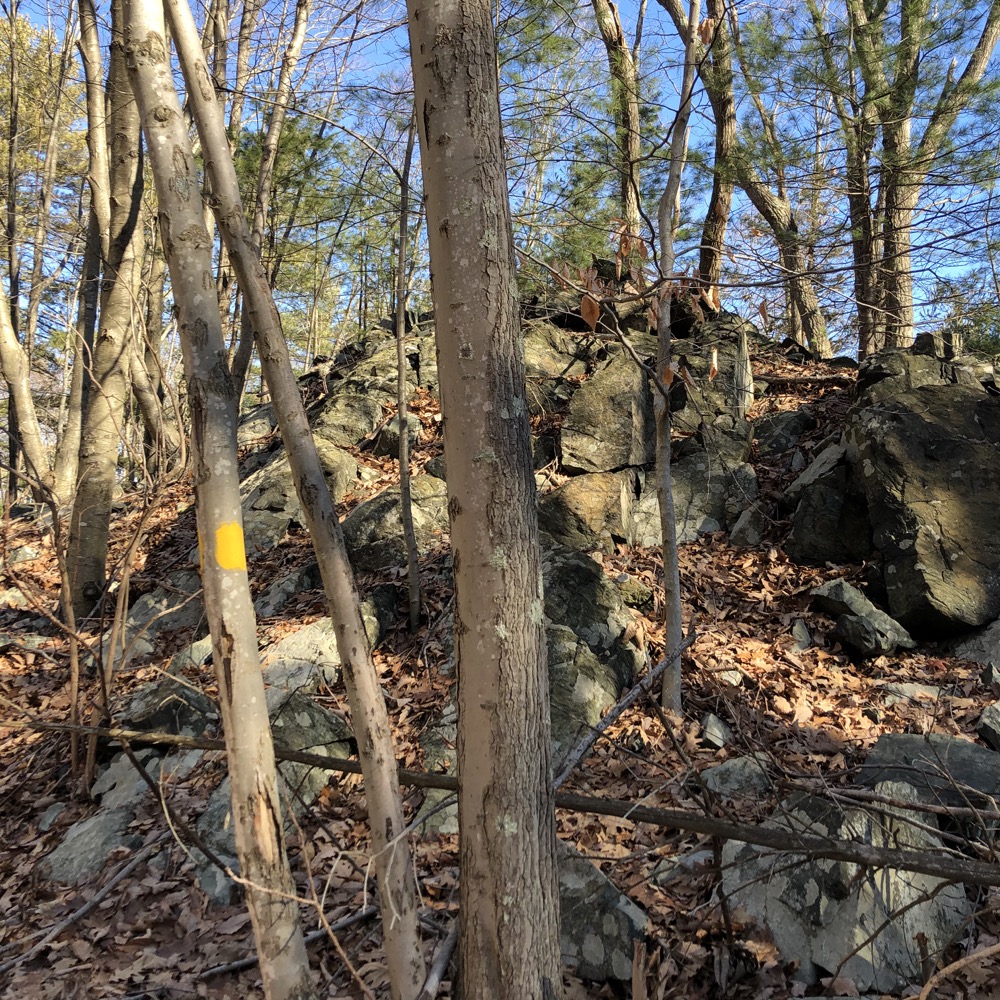 Rocks. Not so cool.

We walked the entire length, and every time I saw a rock, I’d point it out. “Hey Cal, look! Cool rocks!” (None of the rocks seemed very cool to either of us. Rather, the short jogs to the lakeshore were infinitely cooler and allowed sessions of throwing stuff into the water. My son turns 10 later this year and he still loves throwing stuff into bodies of water.)

Towards the end, we found what we considered to be cool rocks: 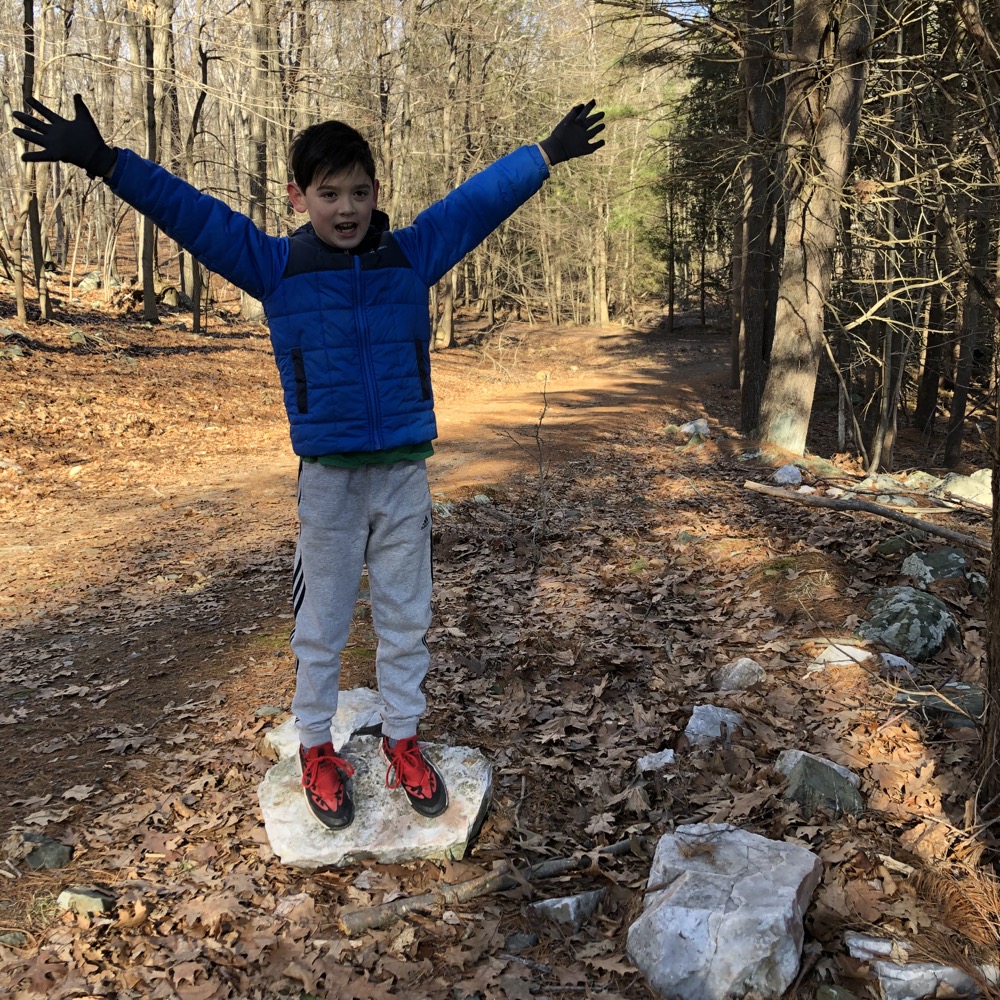 Now that I’m home and have bothered rereading the “cool rocks” bit, I’ve come to learn I had it all wrong.

The Mil Deprey Trail passes interesting ledge outcrops of phyllite. Phyllite is a metamorphic rock intermediate between slate and schist. All three rocks are formed by compressing lake bottom mud under thousands of feet of other sediments. Slate has clearly visible layering and schist has crystals visible to the naked eye. Phyllite has neither characteristic, but its resistance to erosion is one reason why the land around the Maltby Lakes is so hilly.

So here, my friends, are Mil Deprey’s cool rocks: 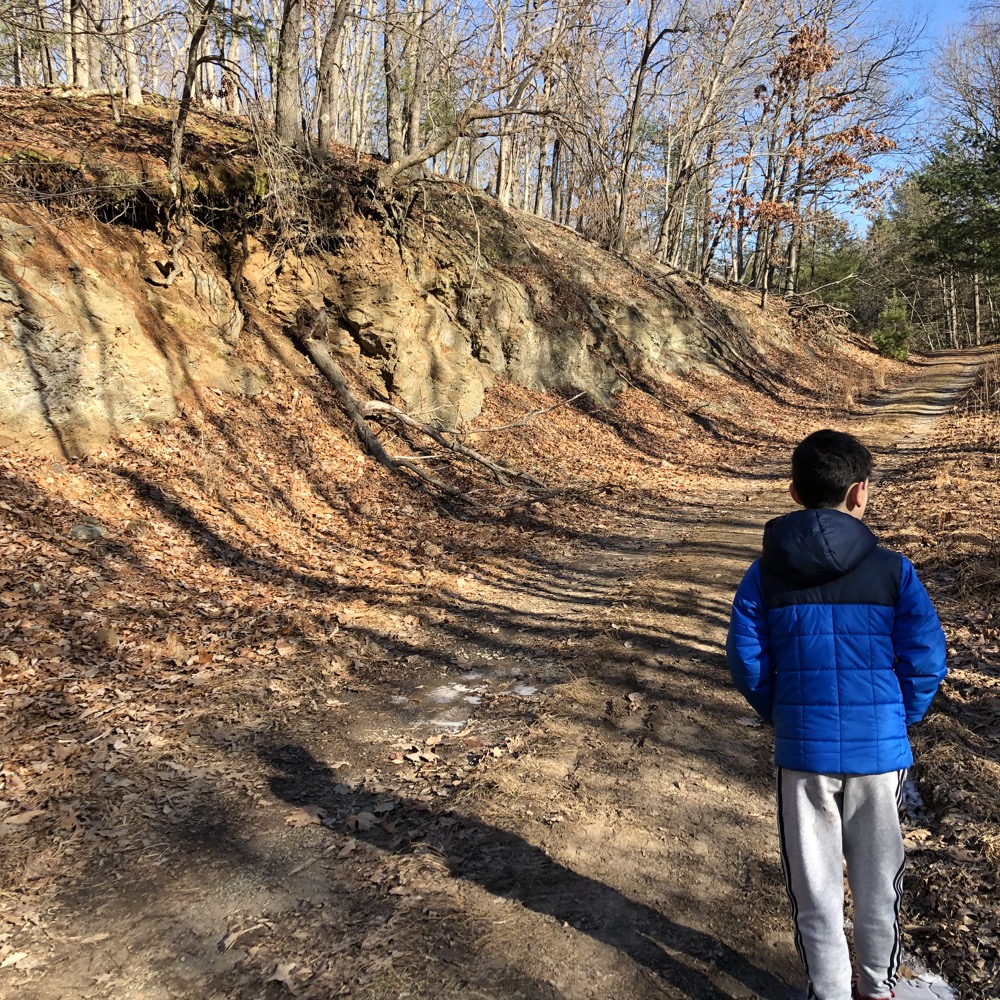 I can report that Milford Deprey served on the representative policy board from 1977-1996, according to a sign at the trailhead. I’m sure that’s impressive. I very much recommend his trail, as it takes walkers along Maltby Lake #2 with its stands of massive white pines.

Those pines continue around Lake 2 to its eastern side and man, it’s pretty. Calvin and I checked out that side for a bit and then I convinced him that it would be worth our while to walk the orange spur Tulip Tree Trail to the northermost reaches of the property. Why? Because that trail crosses over into New Haven, and… yeah. That’s the only reason. And it’s really not a good reason. 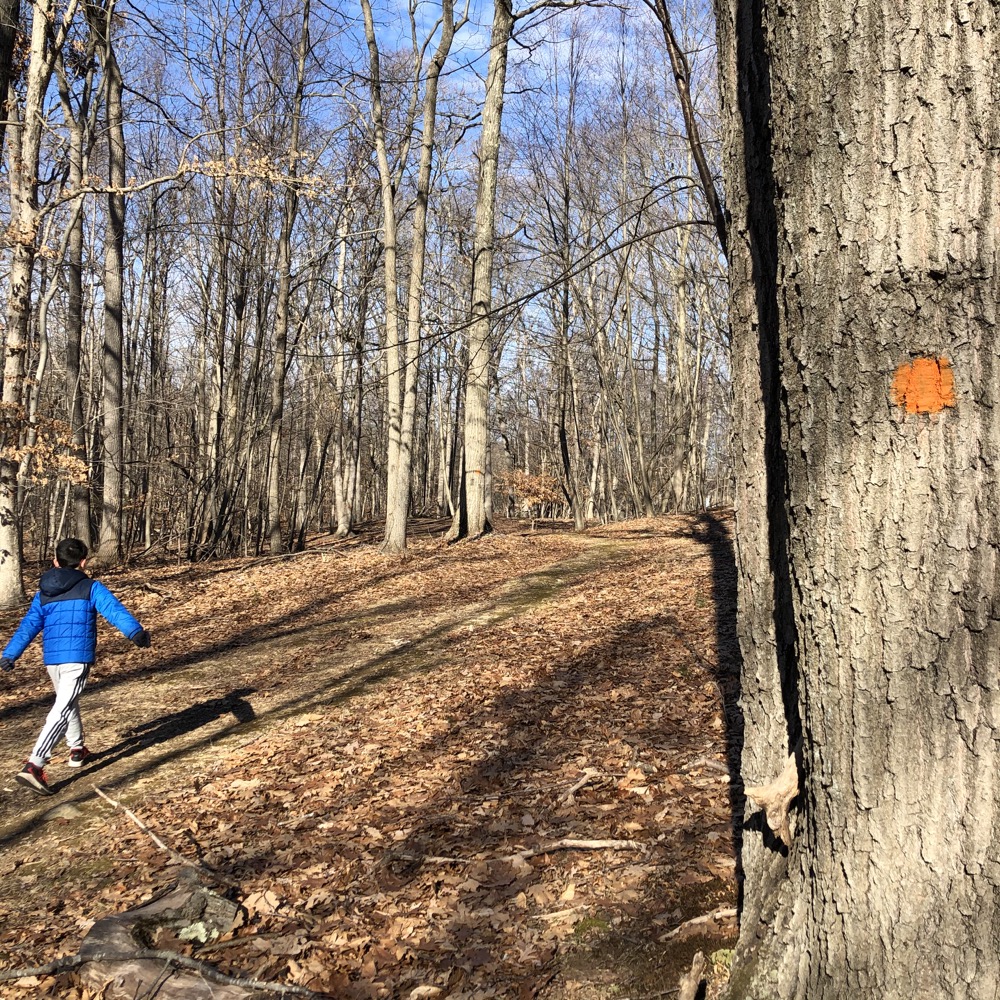 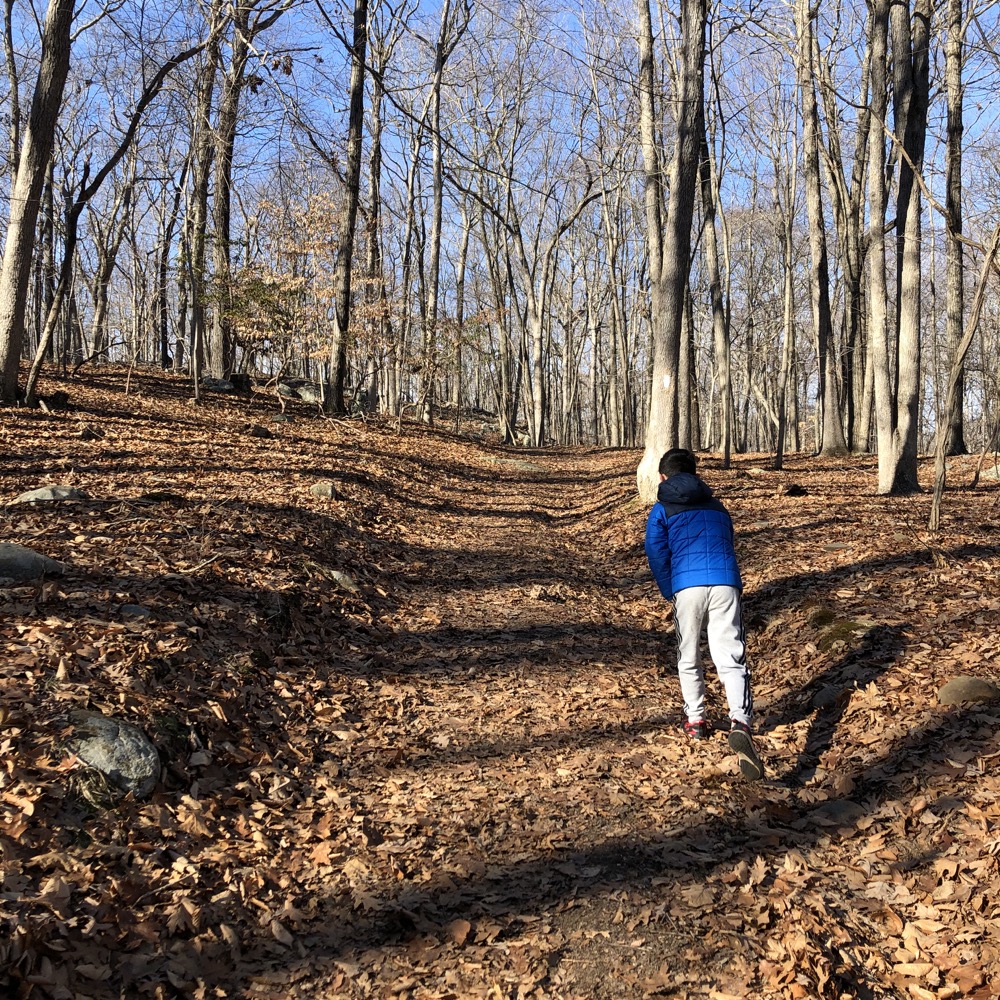 Except for the fact that it was here that I began explaining Connecticut’s 169 towns to my son and how ridiculous our state is and how we’d be crossing over from New Haven back into West Haven before heading into Orange a few minutes later. He found his fascinating – and I was very happy for that.

I began my rant about the sheer stupidity of there being four Havens when it clearly should just be one, but realized that’s Advanced Regionalization Theory and left it alone. He’s more concerned with why a town is named “Orange” at this point.

On into Orange we walked, back on the main white-blazed trail. Right around the town border (which is unmarked in the middle of the woods), some unmarked trails head off to the north and south. Somewhere around here is where the Alien Spaceship/Yoda House is/used to be. I didn’t find it, nor did I look for it, but here’s what it looked like:

That still is taken from this guy’s YouTube video from at least seven years before my visit. I’m a bit bummed that I didn’t see it, but that’s often the fleeting nature of hiking. The YouTube guy, who is very familiar with Maltby Lakes, offers no definitive reason for the structure being there.

We wound up taking the Spruce Trail and another unmarked trail to cut a corner of the main Schaefer Trail. Once back on the main drag, and now alongside Lake #3, we sort of slowed down to enjoy the majesty of the spruce and pine trees. Short spur trails branch off here and there to the lakeside and of course we had to check out each one, as they presented “throwing stuff opportunities.” 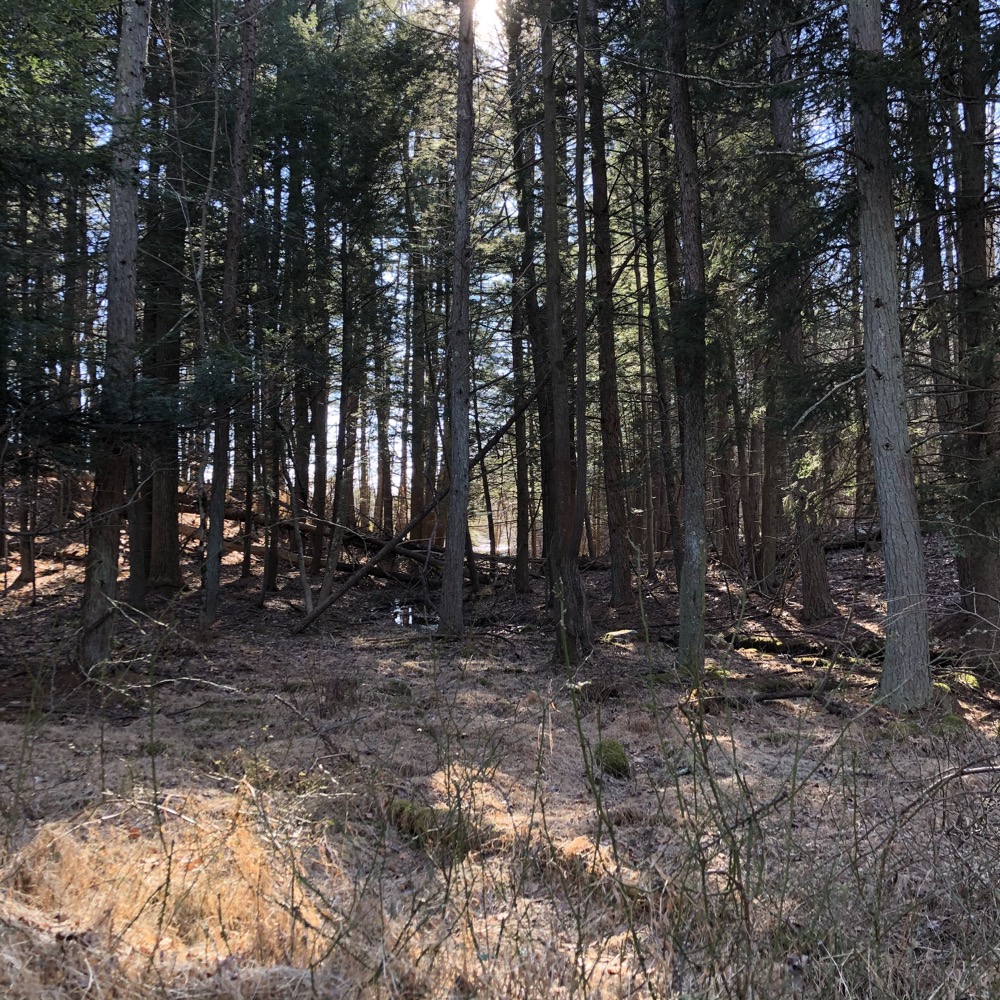 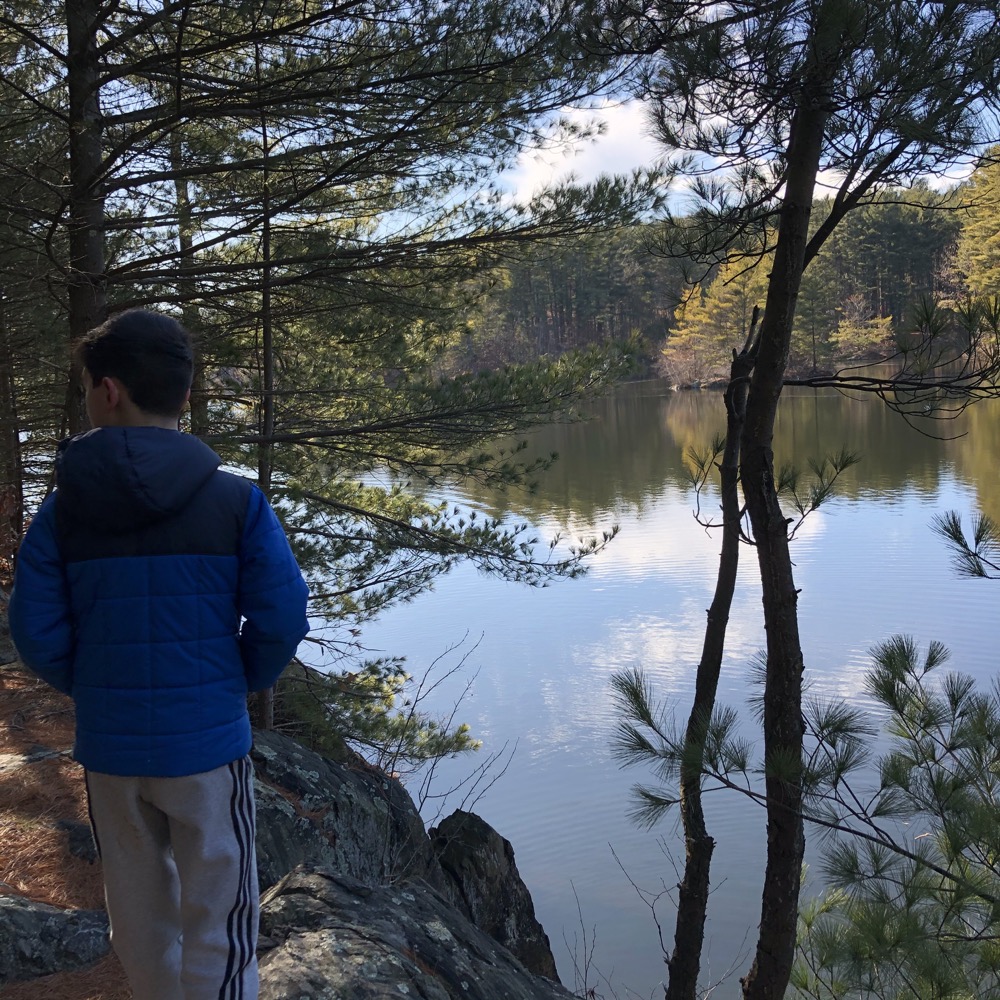 At the final grove of pines at the lake, we watched a guy build a tee-pee (no idea why he was doing that) and just sort of chilled out for a few minutes. The water here appears very clean, as it’s as clear as you’ll find in Connecticut. Route 34 was just over yonder, but it seems the pine forests absorb the sound almost entirely.

Maltby Lakes is an oasis of woods, lakes, and trails smack-dab in the middle of urban and suburban sprawl. A true treasure in Connecticut that feels like a private retreat… probably because it kind of is. 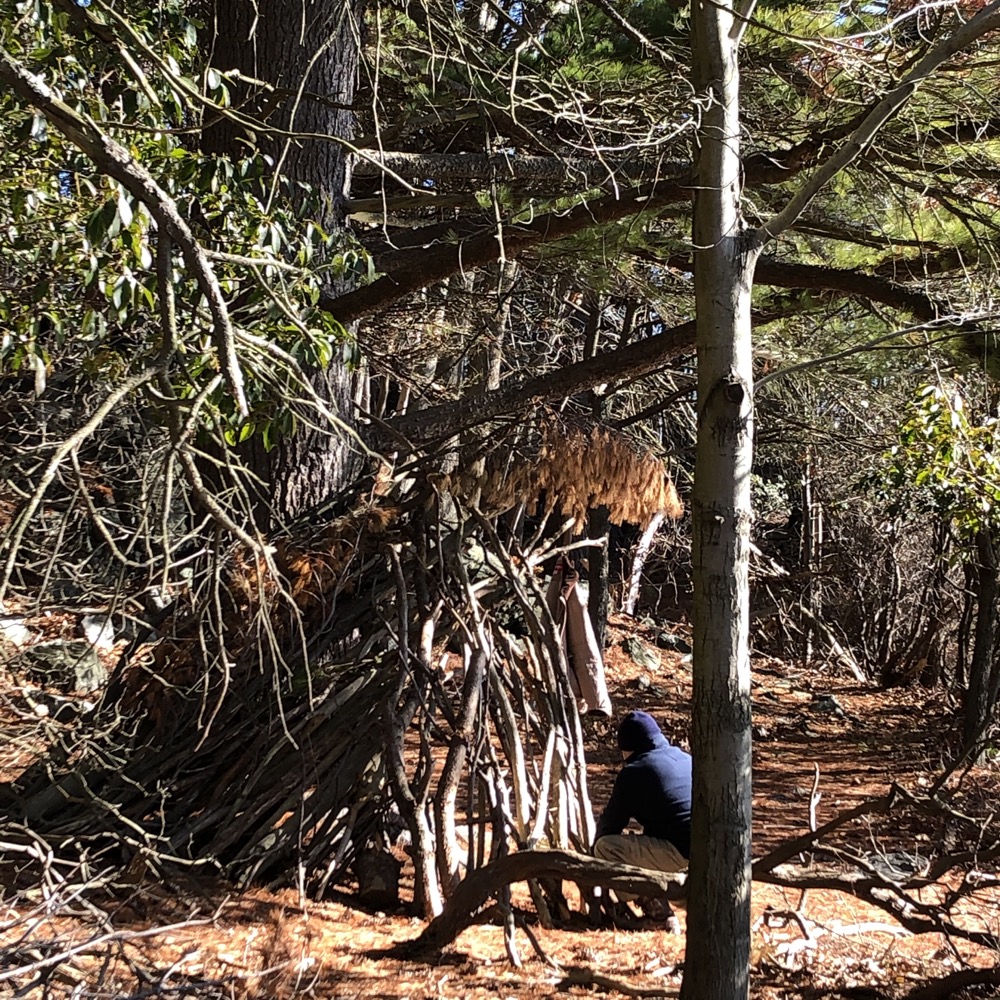 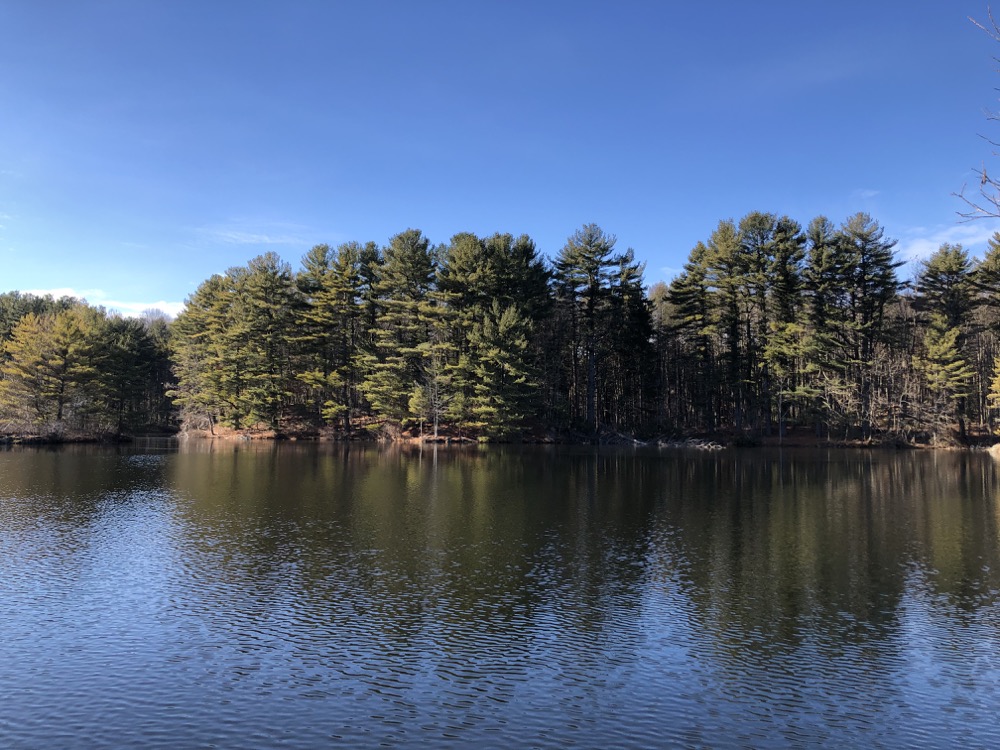