I’d really like to not spend too much time on what I must spend some time on. Intrigued? You shouldn’t be. As your intrepid Connecticut Blue Trails Challenge reporter, I simply must describe the situation with the Mattabesett over off of Country Club Road. When I reached the end of my Section 1 hike, I noted all the “No Parking” and “No Trespassing” signs as well as the blacked out blue-blazes at the trailhead. Not to mention all the bulldozed trees lying about. 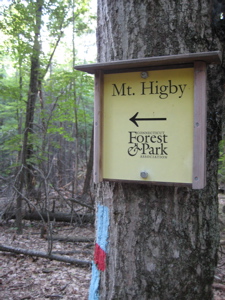 In light of this, I decided it would be best to hike this section backwards, north from the Route 66 crossing instead of sticking to my more sensible continuous itinerary. This decision was not made lightly; it completely screwed with my internal sense of order that keeps me happy. 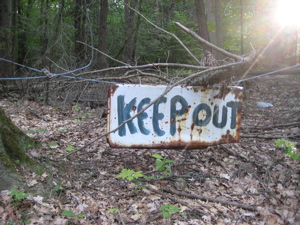 Of course, now you know the answer is B – I just want my pictures and entire multi-sectioned Mattabesett hike to “flow” continuously and not have a weird backwards section due to this access situation. Oh yeah, back to that… Some guy named Jeffrey Pierce and his wife wrangled a 140 acre piece of land on the north and eastern sides of Mt. Higby in Middletown. He has decided this piece of land (formerly – and still surrounded by – Wesleyan University land) is good for an ATV park of sorts. He calls this land Higby Hollow. 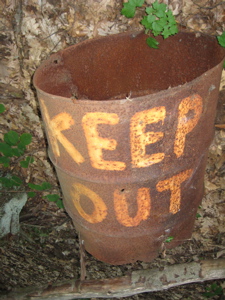 Never mind that it’s totally not a good area for ATV’s as it’s far too small and featureless. Never mind that he’s constantly battling with the CFPA over the 50+ year old Mattabesett Trail route while promoting a destructive activity. Or that even the ATV community seems to think his waivers are silly, his fees are way too high, and his land is just too boring.

It gets better. He’s also trying to sell his 147 acres for $13.1 million dollars, but that website appears to be gone. 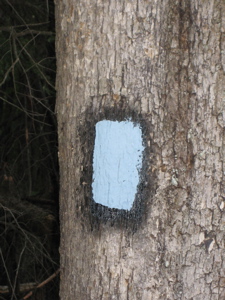 Note the re-blaze over his blacked out blaze

While it’s cool that someone is trying to create legal ATV parks in Connecticut, the way he’s done it is just really lame. The volume of angry “KEEP OUT” and “GO AWAY” signs, aimed directly at (perfectly legal) hikers makes me angry. There is no parking at the “Higby Hollow” entrance, so it seems he’s building one by bulldozing an acre lot. What I don’t understand is that while his waiver mentions being stewards to the environment and to not litter, etc, what is that piled high on his land, just off the trail and slightly out of sight? 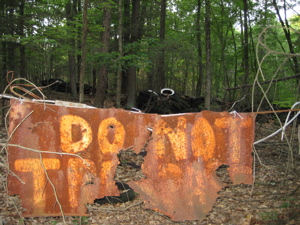 2018 Update: The ATV ranch was shut down by the city of Middletown in late 2008. Reports are that this ugly, messy section of the trail is no longer ugly and messy.

Enough about all that. Let’s get to the hike itself… enjoy pictures of the Sun climbing higher in the West as I describe my hike in reverse. I parked about a quarter mile from the trailhead at a large town park, as was necessitated by the ATV guy. 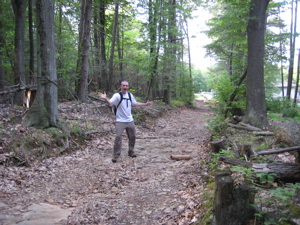 Entering the woods where it is clearly evident I was not welcome does leave an odd feeling in the pit of one’s stomach. I never felt in danger, just a bit out-of-place to say the least. (As my pictures convey, it’s not a friendly place.) The first 3/4 mile of trail here sort of follows the woods road/ATV trail just off to the side. For the record, I saw zero ATV’s and actually didn’t really see too much evidence of their being here recently at all.

Although the trail’s been re-routed a tad, it still follows the general path of the CFPA maps, so that’s not a worry at all. Of note: If you are not an insane completist like me, you can now access the “good” sections of this hike via Tynan Memorial Park. A blue/red blazed trail will show you the way, which is nice. 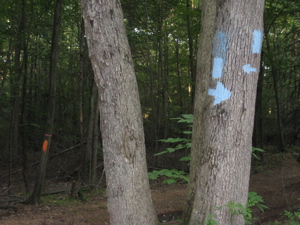 Once the trail turns west, most of the ugliness is left behind, although there are some large swaths of dead hemlocks and interesting barriers to either keep out hikers or keep in ATV’s. I never figured which. I do want to make sure I drive this lesson home: The first mile and a half of this section is was sketchy and ugly, yes… BUT it is totally worth it to get to the rest of the hike. No question. 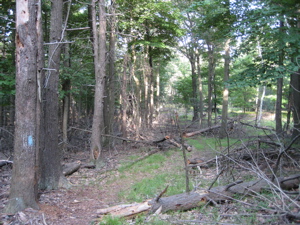 First of all, the hike “up” is very gradual and easy. The beauty of out traprock ridges is that they all pretty much form a giant ramp, so to speak; gradual slope on one side, sheer cliffs on the other. They all seem to be east/west facing too. There is much on the web about this unique geography, and I’ll explore it more in later sections I think, as the Mattabesett actually leaves the traprock ridges in Madison and crosses over to some different land forms.

In other words, a very easy hike up a gradual slope and suddenly… 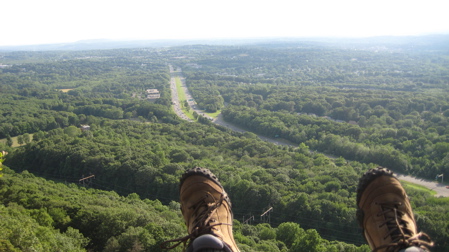 Yeah okay, the view is of an interstate highway, but it’s still cool. The haze of the day is evident, but the cliff is sheer and it’s rather exciting to be up there. Just for fellow Nutmeggers (and passers-through) to get your bearings, remember every single time you drive up I-91 North and see this? 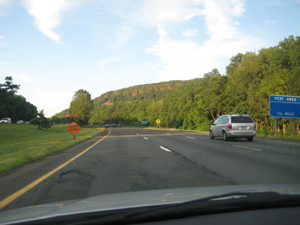 That’s where I am right now on this hike. Up there. Loving it. Remember that ugly quarry on the other side of I-91 from the last section? I’m leaving that in the distance: 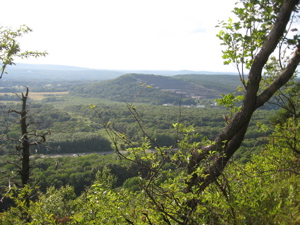 The walk along the cliffs of Higby Mountain are just great. (Which is another reason the ATV thing irks me – it’s denying people access to this from the north.) Higby is actually two distinct humps with a “notch” in between, called Preston Notch. I have no idea who Preston was, sorry. I know you look to CTMQ for such factoids. I can make one up if you’d like.

Walter Preston was a colonialist who was accused of conspiring with the Tories in 1779. He was hung from an oak tree in the swale between the two Higby peaks and left for dead. As the mob of angry revolutionaries began walking away, they noticed Frank Preston hiding behind a tree, watching the whole affair. He was grabbed and stripped to his skivvies, which happened to bear the Union Jack. He was also noted to have bad teeth and a pocketful full of loose leaf tea. Walter was cut down and freed, but still made to watch the hanging of his traitorous brother, Frank.

So there you have it. A true(r) story about Higby is that I see it every morning from the parking lot at work. Also, I get to stare at it all day long out my office (aka cubicle) window too. To think I’d never been up it before is just crazy to me.

2018 Update: Man, I sometimes forget at worked at Aetna in Middletown back in the day.

Once on the southern, slightly lower elevation Higby peak, I fiddled with my camera to set a 30 second timer, but forgot to change the depth of field setting. (As if I really know how anyway.) As a result, you get this picture: 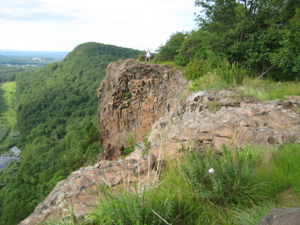 If you squint, you can see me in the distance. After I returned to the camera to see my handiwork, I decided against sprinting across the cliffs again for a second try. Now you know. Also know this: July 11th seems to be peak blueberry time on Higby Mountain. I stopped to enjoy handfuls upon handfuls of them: 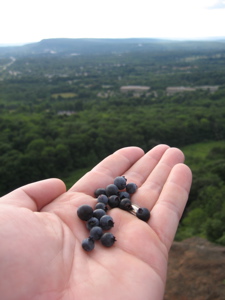 I figured, “Hm, if the blueberries up here were so delicious, the bearberries must be equally so. So red… so shiny… mmmm… 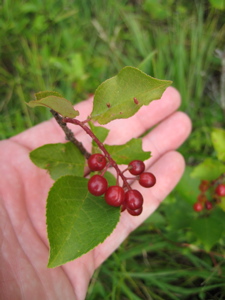 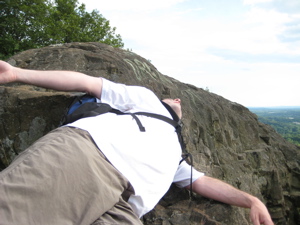 Actually, you can supposedly eat a couple and be okay. But the possibilities – while sorta cool – aren’t worth it: “Bearberry is relatively safe, though large doses may cause nausea, green urine, bluish-grey skin, vomiting, fever, chills, severe back pain, and ringing in the ears.” Green urine? Hmmm…

Continuing south down the ridge along the cliffs, the views don’t quit for almost 2 miles. In fact, heading south, they seem to get better as you go. There’s even one spot called “The Pinnacle” which is cute, but for those of us familiar with the plethora of other Pinnacles on the east coast (I know I’ve been to at least a dozen) it’s not the best pinnacle in the land. 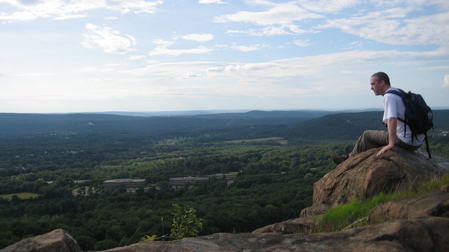 But that’s really only because of the highway and powerlines. But, as you can see from the pictures, it is still very nice and I seem to have enjoyed it quite a bit. 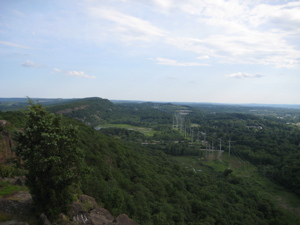 Near the end of the cliff walk, there is a strange piece of graffiti – yes, there is graffiti on pretty much every central Connecticut rocky outcropping area, but surprisingly little trash (so far) – anyway, this guy (or girl) really loves the Mattabesett: 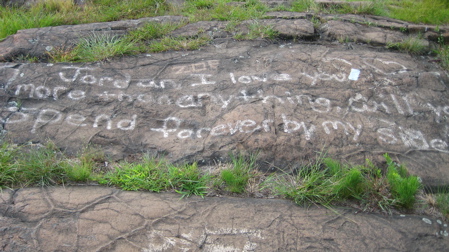 “Jordan, I love you Mattabesett Trail blaze more than anything will you spend forever by my side.”

Awww, I’ll think I’ll crop that and take it out of context to use it in another report:

There, that’s all one needs to say.

Once the southern end of the cliffs are reached, the trail swings left and heads down to Route 66. I must mention that the trail crosses into and out of Cockaponset State Forest for about 100 yards just as the descent becomes gradual. I only mention this because a) I like saying “Cockaponset” and b) this State Forest seems to be EVERYWHERE in the southeastern quadrant of the state. It’s a massive patchwork – and is therefore sort of weird to me. 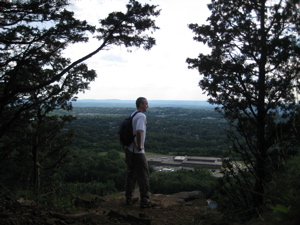 The descent to the end of this section is easy but is littered with those softball sized cube-shaped rocks I’ve become so familiar with on this trail. I mean, this isn’t too fun: 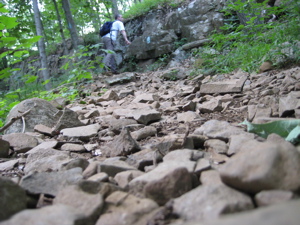 For one brief moment, I was reminded of the many-miles stretch of the Appalachian Trail in central Pennsylvania known as “Rocksylvania.” I quickly was thankful that my current stretch was a walk in the park compared to that. Especially since the last half mile or so ambles softly through greenery and grasses, down to perhaps the best trailhead treat I’ve encountered thus far: 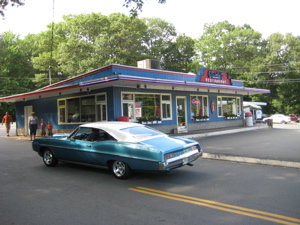 Yes, an authentic (sort of) old-school diner! The trail actually goes through the parking lot of Guida’s Restaurant and there happened to be a classic car event there the day I hiked through. Either that, or guys with classic cars like classic burgers and malteds a disproportionate amount – a distinct possibility. 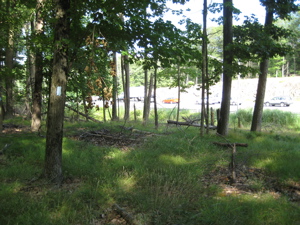 (Alas, as this was actually where I began my day, I didn’t get to enjoy a real milkshake or anything at Guida’s. And since I’d be resuming my southbound trek next section, I’ll miss out again. Then again, this place is was only ten minutes from work so I’ll stop whining now. It’s also home to a “Best of” Connecticut hot dog) 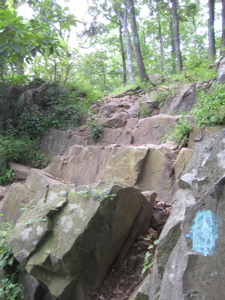 Continue on to Section 3: I Besecks Thee!