This movie aired on BET, not Hallmark and not Lifetime and there are some legitimately good jokes in it. It’s still a terrible and cliche-riddled flick, but still more enjoyable than most in this genre. 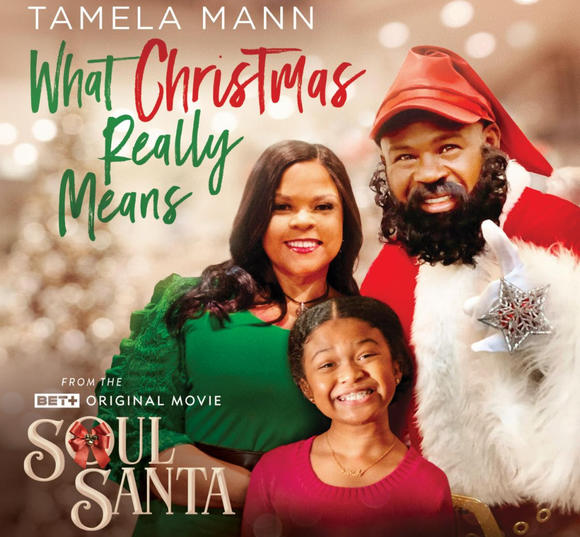 But hol’ up. The two stars here, Tamela and David Mann are married in real life. And (pardon me, for I am decidedly not a gospel music or Tyler Perry fan) Tamela is a gospel star with a voice from heaven. And both have been in a ton of those Tyler Perry “Medea” movies that I don’t understand.

In January 2015, a reality show about their family, “It’s A Mann’s World,” premiered on BET. They’ve had their own sitcoms and everything. And they had to spend time in eastern Connecticut filming this movie during a pandemic. Norwich and Mansfield to be exact. I’m guessing there were prayer-filled evenings in Willimantic every night. 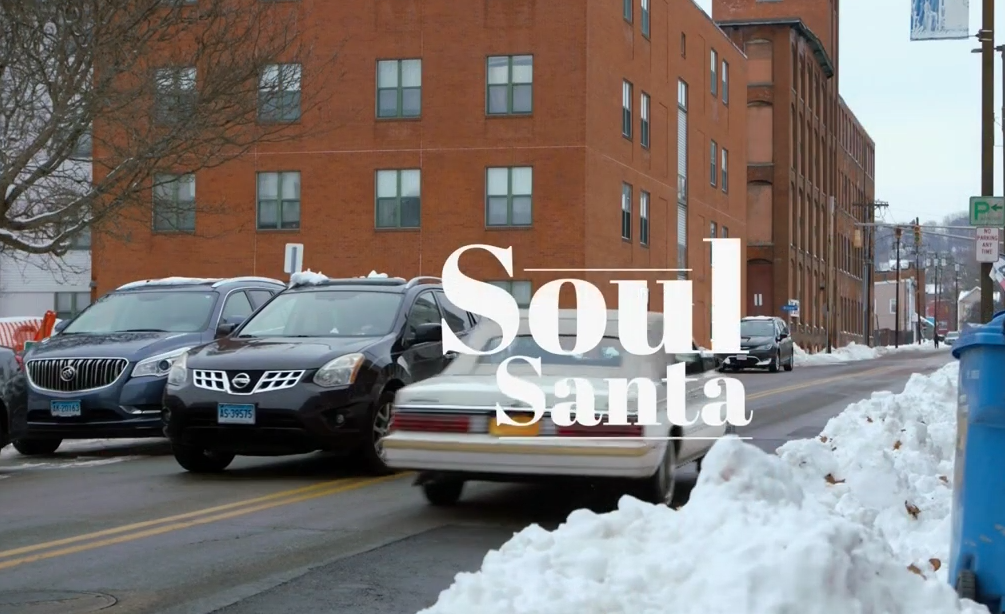 What I liked about these opening street scenes is that the main character’s license plate was from New York, but everyone else’s was Connecticut. Because this is Norwich. Not New York.

When an unlucky businessman (David Mann) gambles away everything, he is forced to go on the run and hide out as a shopping mall Santa Claus. While adding his own spin to being Santa, he begins to turn his life around, realizing that his family is the real heart and soul of Christmas.

Mann plays Nicky Cole. He is not an “unlucky businessman,” but rather a career criminal working for the “the mob” in New York City. He’s their money collector, and is apparently pretty good at it. He’s also pretty good at being stupid and gambling away not only his money, but also the mob’s. The mob, helmed by “Irish Mike,” does not like this development. 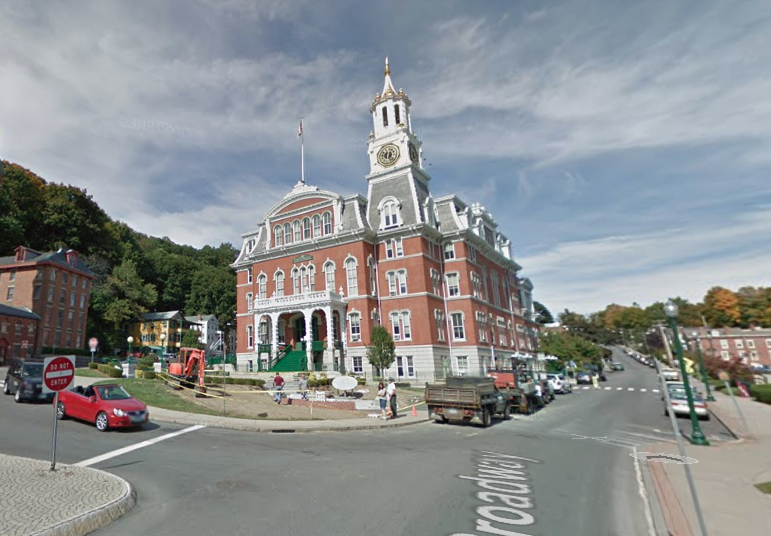 In fact, you can see Norwich’s rather recognizable City Hall in the previous screenshot as well.

So Nicky flees the city in his 1984 LeBaron to hide out in his ex-wife’s house – noted as being in Stamford.

His ex, Liz, does not like him because of his criminality. So his cute daughter Nevaeh hides him out in the basement and doesn’t tell her mom. This ruse lasts a day until Liz catches him after a midday shower. She’s only a little bit sore that her ex-husband, who is a criminal and currently owes the mob $50-grand he doesn’t have, and is hiding out at her house. She is a very nice woman.

(Actually, plot point: He tried to flee to Canada but his “rickety old LeBaron” couldn’t make the drive, so he wound up in Stamford.) For some reason they had to CGI a “Connecticut” Big Green sign and it looks terrible: 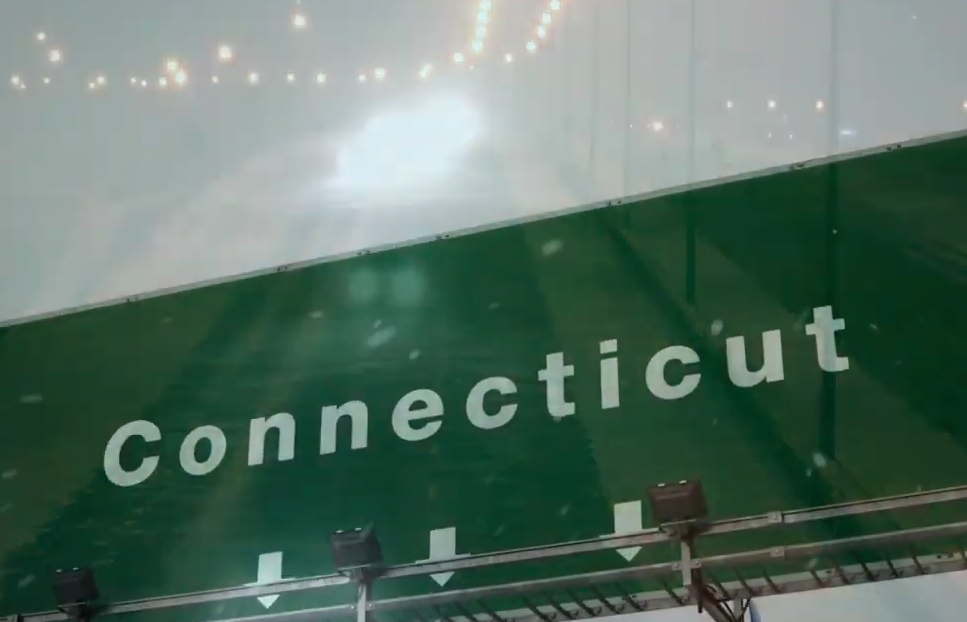 Positive plot point: The movie script made it clear that Nicky never told the mob or any mob adjacent people that he had an ex-wife and a daughter. This was smart, as it explains why they didn’t first go looking for the family.

As Nicky integrates back into the family, he notices some changes in Liz. She’s “new-agey” now and prefers some minimalist design to the traditional stuff. Nicky makes fun of her for this, saying, “I see you Liz, Stamford done turn you into a Stepford ex-wife.” This insult fell flat for me mainly because it makes no sense at all.

He notices a sculpture with a large posterior and notes that some things still ring true. 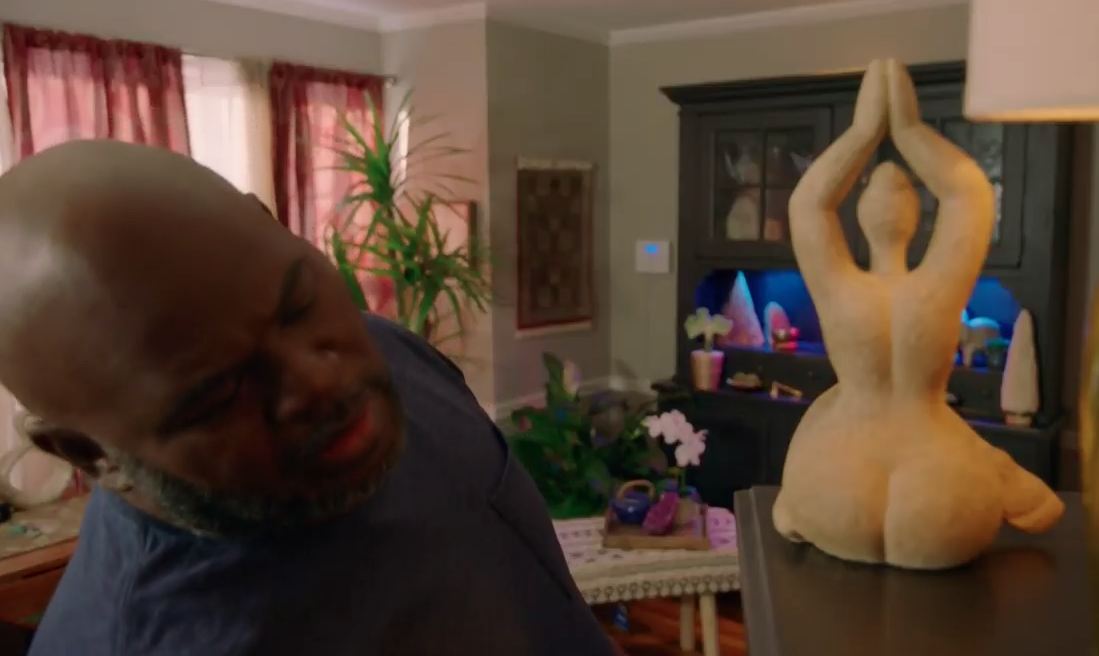 He likes big butts (Liz is a full-figured woman, you see.

Liz has a decent position at the local Sunshine Mall, but things aren’t going so well over there. Their veteran Santa Claus has accepted a position at a rival mall and sales are falling flat. Replacement Santas are all bums, so wouldn’t you know it? Nicky becomes the mall’s Santa.

“This is James Evans. He just moved here from the south side of Chicago with his wife Florida and their three children. He has references from Alderman Fred C. Davis and community activist Willona Woods.”

Liz replied with a glare, “I’m sure you had Good Times in Chicago.”

This old white guy writing this is very familiar with the reference and I got a pretty good laugh from it. They used this comedic device several more times: How does Nicky keep his Santa suit so clean? “Jefferson Cleaners run by George and Weezy.” Where did you learn to dance like that? “My three friends Rog, Dwayne, and Re-Run.” Great stuff.

They put in a scene from the frozen Connecticut River as a transition device at some point. Good times indeed. 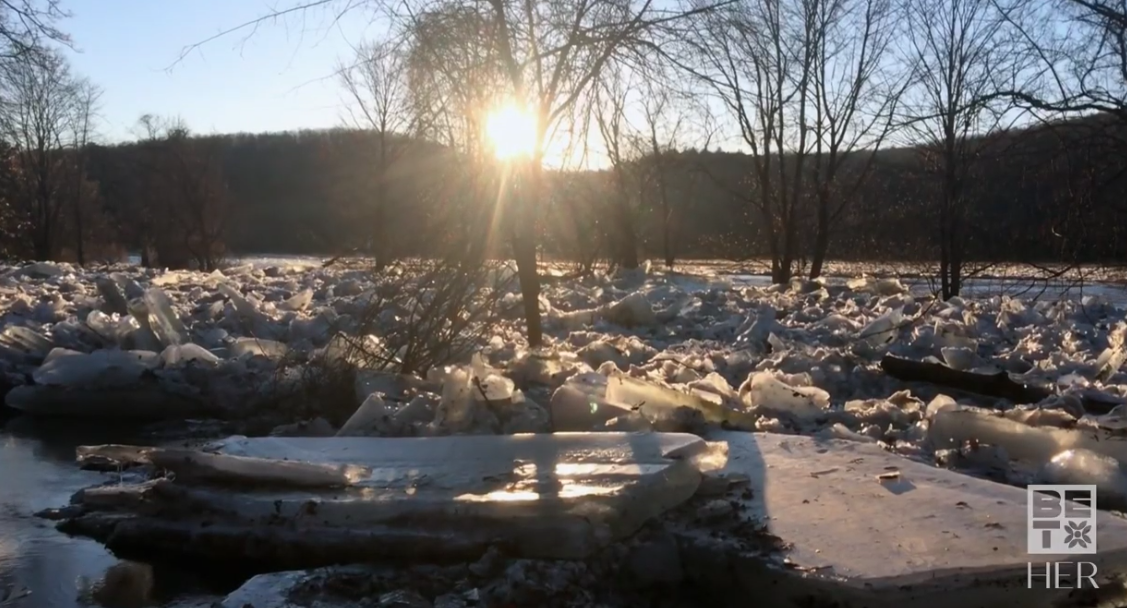 Alright, Nicky struggles as Santa at first but settles into the job as Christmas approaches. Meanwhile, Irish Mike is sore that Nicky has slipped town and has made him look soft. He puts out a $20,000 bounty on his head and sends his henchman out looking for him. First it was just to catch him and beat him up, but later it was to kill him. Merry Christmas.

The new black Santa infuses some “soul” into the role which raises a few eyebrows at Sunshine Mall. The mall used in the movie is East Brook Mall in Mansfield. Heck, they probably shot the scenes during normal operating hours – it’s not like anyone actually shops there. It seemed like a dying mall back when I was at UConn in the early 1990’s. The Photoshopping of the entrance was as bad as the Connecticut highway sign earlier. 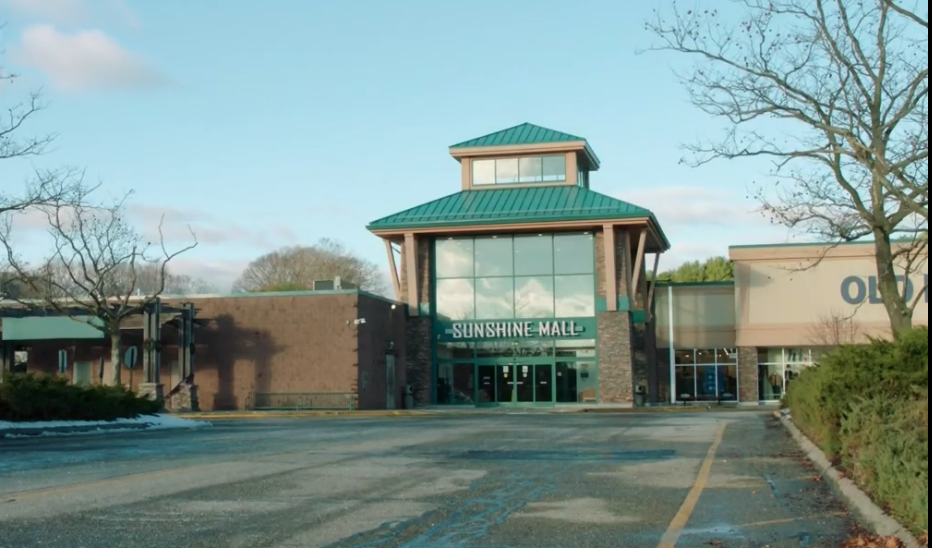 The fictional Sunshine Mall is dying worse than real East Brook Mall, and the owner is going to have to close it down if they don’t have a fantastic holiday season. Nothing a hip new Santa can’t fix. He recruits his daughter to help with a Santa’s Workshop play area – a place that seems to attract the same seven kids for a week straight. Why aren’t these kids in school?

They even win over a snobby little white boy who is “above” such things. The magic of Christmas.

Meanwhile, Liz is falling for her handsome coworker which is a plot point I suppose. The guy is a scab, and Nicky ultimately exposes him and there’s some blackmail when the guy learns of Nicky’s true identity. Irish Mike tracks down his quarry – another laugh: his henchman’s strategy to find Nicky works and he says to Irish Mike, “See? I told you I was a stable genius” – and everything comes to a head. 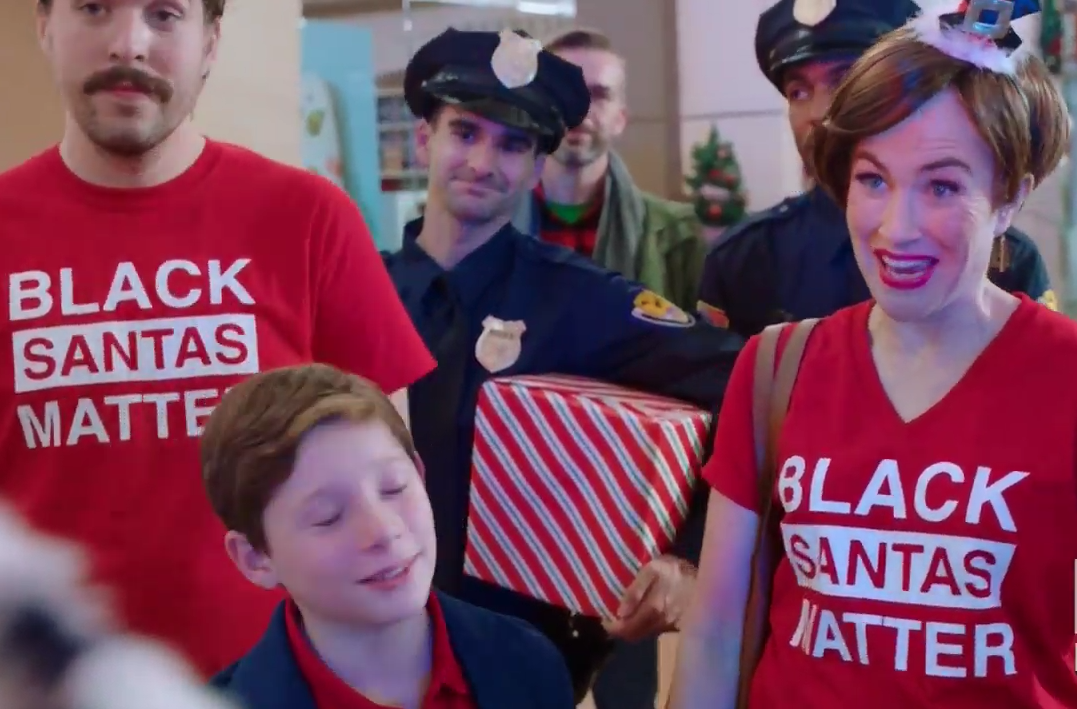 The mall is turning around financially! Liz has big ideas for a new mall concept. The bad guys are closing in. And it’s Christmas Eve. The night of the big, full-on “soul” themed party at the mall. Liz tells Nicky to be sure he’s on time – “be on Santa’s time, not CP time” she implores. (Another nod to the BET demographic, as “CP” time is “colored people’s” time if you were unaware.) But Nicky can’t go! He’s been blackmailed by the scabby guy! Oh no!

Nicky throws caution aside and ends up going to his party anyway. He gets the party started and… oh man, this was a tough scene. There were like 20 people at the big party and the stage and set-up looked so cheap and chintzy, which… reflects what reality would be at the East Brook Mall on Christmas Eve, but it’s not what the movie was going for. The mob guys have arrived, the scabby guy is there, but so are some cops; friends of a frequent mall shopper’s husband. (A husband who, by the way, berated his wife earlier and seemed like a real jerk although we never heard him speak. In fact, there are scenes when any normal human would speak, but he did not. I figured the producers made this decision to keep him as an extra and not a paid actor with a speaking role. It was really weird.) 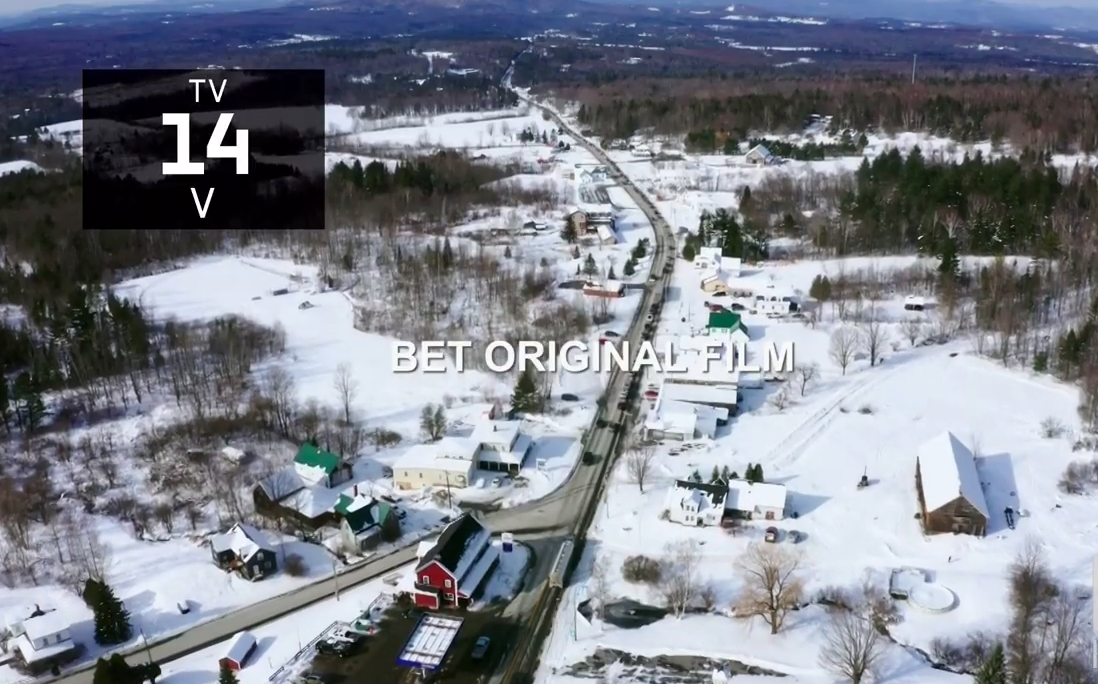 This looked Connecticut enough. I’ll give it to them.

The scabby guy outs Nicky to the crowd, but then Nicky owns up to his past and outs the scabby guy for being serial harasser and he is promptly fired. The mob guys are arrested by the cops in attendance and the whole thing ends with singing and Christmas love – and an alive Nicky. Liz falls back in love with her ex-husband as well. It’s all really terrible.

What made this movie bearable were the jokes. The “in” black people jokes that I’m sure would actually be lost on, say, my parents and my in-laws (Elderly white and Asian people). It’s a tough trick making Norwich look like New York City and convincing us that an Irish guy with black “employees” is what “the mob” is comprised of these days. And that a new Santa can turn a mall around simply by infusing some black culture into the role – in Stamford no less. But hey, the snow was real in this movie, and that’s a first. BET… keepin’ it real.

CTMQ Rating: 2 out of 5 thumbs up
Connecticutness: 144 out of 169 Nutmegs
Filmed in Connecticut? Yes!
Wealthy Caucasian with a Big House? No