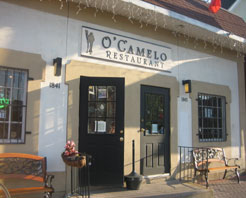 This was the first event of the CTMQ CT Restaurant Tour of the World.

I did it! I got over myself and my introversion and pushed through to organize and pull-off the very first Connecticut Restaurant Tour of the World dinner! I don’t want to get all Mommy-Blogger on you or anything, but this was not an easy thing for me do. Thanks to my coworker and friend Margaret who not only provided the pictures for this page, but who pretty much told me to stop being lame and to get this thing off the ground.

So I did – WE did. Nineteen people RSVP’d and 18 people showed up (the 19th did call in sick, so she’s not blacklisted). Notably, 17 of the 18 people were on time. I love these people. No one cared though because several folks who are much more socially adept than I am mingled over some wine and appetizers. (I should note that I think 33 or 34 people RSVP’d, but I had to limit the crowd. Keep it exclusive, y’know?) 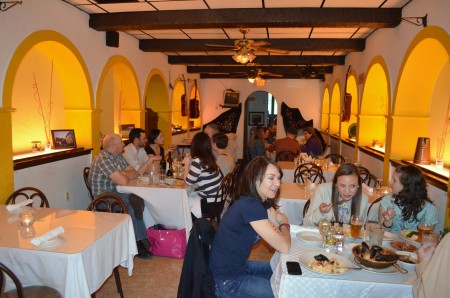 O’Camelo is on Park Street in Hartford. I guess it’s officially in Parkville. I love Parkville and have been touting it as a mild urban success for years. Since the city has improved the sidewalks, storefronts, awnings and street lights, it has really become a pretty cool place to shop and eat. There are all sorts of ethnic shops and restaurants on Park Street – which becomes Park Road at the West Hartford line, which I always find kind of weird. Park is bisected by New Park. Parking here is free.

A few out-of-towners had that ol’ fear of Hartford thing going on, but there were (of course) no issues. Entering O’Camelo via the bar might not have immediately dispelled those unfounded fears, as old toothless Portuguese men arguing about soccer isn’t usually the most welcome sight.

But I love those guys. And I love their cuisine. 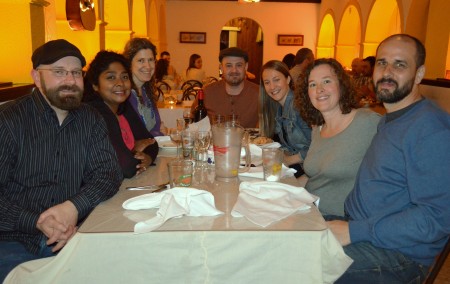 The warm dining room here is wholly separated from the bar area. The walls, accented with a series of arches, are bathed in a yellow glow which doesn’t draw attention to all the Portuguese miscellanea around the place, but doesn’t hide it either.

We were the only diners in the dining room that night, but we were assured that O’Camelo does a brisk business throughout the week. (This was borne out with the fact that the most Portuguese dish – the cod – wasn’t available to all of us because so many had been eaten the previous night.)

Wine flowed early and often – I never saw it, but my table mate Dorie said that the wine list ranged from $12 to $18 per bottle. I thought this Peccatore Douro Reserva was pretty good. I’d never heard of it, so here’s some good info from Pop & Pour:

This particular wine comes from the Douro region in northern Portugal, which is (drastically) more famous as the birthplace and home of Port, the sweet fortified dessert wine. The grapes from the Douro that go into Port (the most important of which are Touriga Nacional [Portugal’s top red grape], Tinta Roriz [known elsewhere as Tempranillo], Touriga Francesca, Tinta Barroca and Tinto Cao) are also made into dry table wines, of 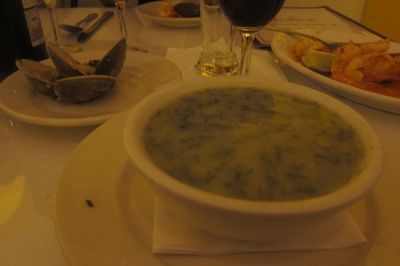 which this is one, that share Port’s boldness and fruitiness but do not have its heightened levels of sugar and alcohol. While you find the odd high-priced luxury dry Douro wine out there, the majority of them are very reasonably priced given the quality of what’s inside. Peccatore appears to be a second label of the larger producer Quinta do Portal; the word “Peccatore” means “sinner” in Italian, and the somewhat-creepy label gives you a clue about the kind of sinning going on.

The set up for dinner was a little awkward, in that we were situated at 3 different tables. However, if we were at one giant table, I think that would have been even more awkward. I enjoyed the easy going and easy flowing way we all sort of ordered on our own, at our own paces. It staggered the work for the chef and didn’t drive anyone crazy. I like that method of doing things and will probably stick to it down the road with larger groups like this one. 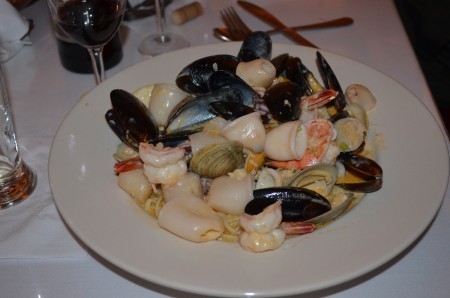 One guest commented, regarding my friend and our Portuguese guide, “I liked that Helder stopped at the tables and shared opinions/drinks. Kind of connected the tables,” so that makes me feel better.

I only heard a couple grumbles about salt levels, but aside from that, I think everyone enjoyed their food. I know I loved mine. And since I can really only talk about mine, let’s get to it:

I ate a bunch of olives that someone at our table ordered. They were good olives. I learned that my friend Justin doesn’t like salt, brine or anything from the ocean. Because of this, he is no longer my friend.

I had some of the classic Portuguese Caldo Verde (Kale Soup) which, like all things kale, did not excite me. But I felt more ingrained in the culture eating it. I don’t even like kale, but I downed this soup, so I guess it was therefore good.

Moving on to our appetizers, we shared the Camarao C/ molho de vinho e alho (Shrimp w/wine & garlic sauce) and some Ameijoas (Steamed clams). Both were cooked to perfection and it boggled my mind that no one at our table wanted to partake – no one other than my wife, that is. I could eat good clams and shrimp for hours on end. (And I’ve been known to do so.) 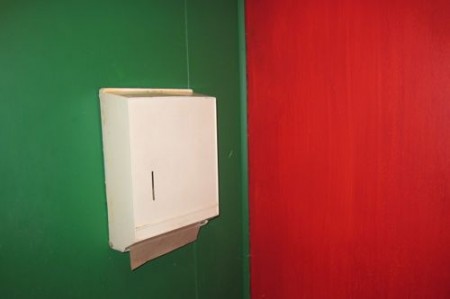 Another appetizer that was a big hit was the Cugumelos salteados (Mushrooms sautéed with bacon, garlic, and olive oil). I think this and the codfish were the most talked about dishes of the night. Margaret, who had both of these also had this to say about the evening: “Food and atmosphere were good and we would def go back. Oh, and we loved our waitress.”

Not content with all that shellfish I’d had, I ordered O’Camelo’s Mariscada (Assortment of seafood in a cream sauce) which was a little ridiculous with all its mussels and scallops and calamari. The squid was a bit tough, but still, I ate them all without suffering fatigue. 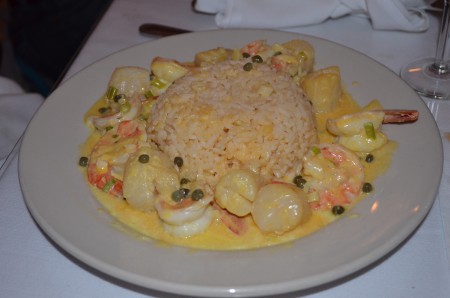 Hoang’s Delicias do Mar c/ Camarao (Sea scallops and shrimp in a creamy mustard sauce served with rice) was phenomenal (here at left). Never in my life would I think scallops (which I love) + mustard (which I love) would work. But in O’Camelo Chef/Owner Maria’s hands, it works really, really well. I loved it.

Only one of our group got the Bitoque (Steak w/a fried egg on top and fries) and quite frankly, the giant steak disappeared before I could even ask Justin how it was.

Hoang got the flan for dessert, but was pretty much the only person to eat it. I’m happy to say that the majority of my table dislikes flan. They may not hate it like I do, but no one else liked it. (I did try it, and I’m sure it’s great for flan. I just hate flan. Don’t be upset Portuguesies, I hate crème brulee too.) 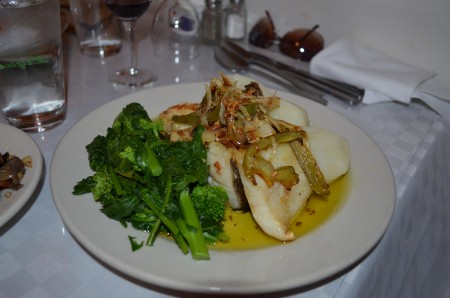 Before I knew it, it was almost 11PM and almost everyone was still hanging out and talking. Our “host” for the evening, Helder, busted out the bottle of Espinheira Ginja – the traditional Portuguese cherry liqueur. Almost everyone agreed on a little snifter of the booze and I think most were glad they did. It’s like a warming brandy of sorts, but with a bit of a cough medicine taste.

I saw Helder toast another diner with the way more hardcore alcohol called aguardente which basically means “fire water.” I stayed away, but I did just learn all about it. Other folks enjoyed after dinner ports as well. 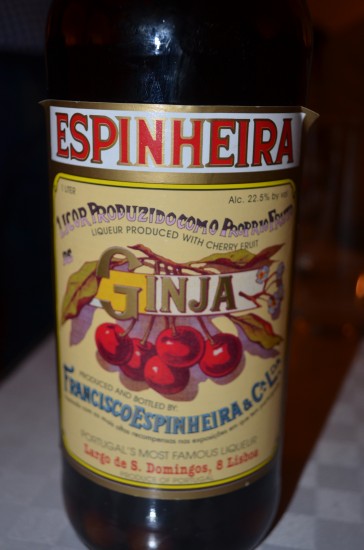 Ports are from portugal, of course. Hence the name. Should I use this opportunity to make fun of a local “foodie” flogger who once expressed surprise that her port was from Portugal? Nah, why ruin this page?

That reminds me; there is a fancier and larger Portuguese restaurant a few blocks west on Park Street named O’Porto (I’ve been and it’s good). In fact, there are a bunch of Portuguese bakeries very near O’Camelo and a Portuguese sports bar café – I’ve been to all of them as well. In fact, I went to Cambrense Café at Park and New Park during my 2006 World Cup Tour – check it out. I have not been to the Nutshell Café over near Trinity, but Helder assures me that it is excellent.

I had fun. I feel like I made several new “real life” friends and I hope most of the others felt the same. We ended up staying to 11 PM – an hour past closing! I didn’t even know that until I was looking at their menu for the correct spellings for this page. Ooops. I hope the grouped tipped well enough to compensate.

I want to thank everyone who made this first event a success. From the 18 friends who dined to Helder who helped organize and especially to Maria, the owner/chef at O’Camelo. Like they do on TV, she came out to the dining area towards the end to receive the accolades from the crowd. She told a couple stories about Portugal and had a humble reserve that said, “thanks but I just want to cook.” 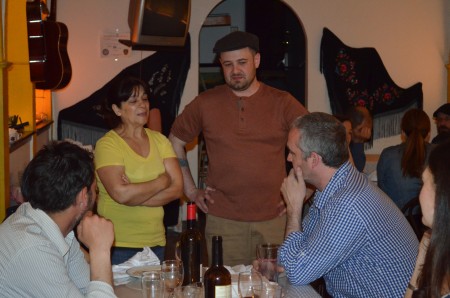 Maria and Helder and my gray hair