What’s the “bold claim” reference in this page’s title? It is that I’ve “completed” Canton with this hike. Every museum, every trail, ever entity that I care about, visit, and write about for this website. Done. 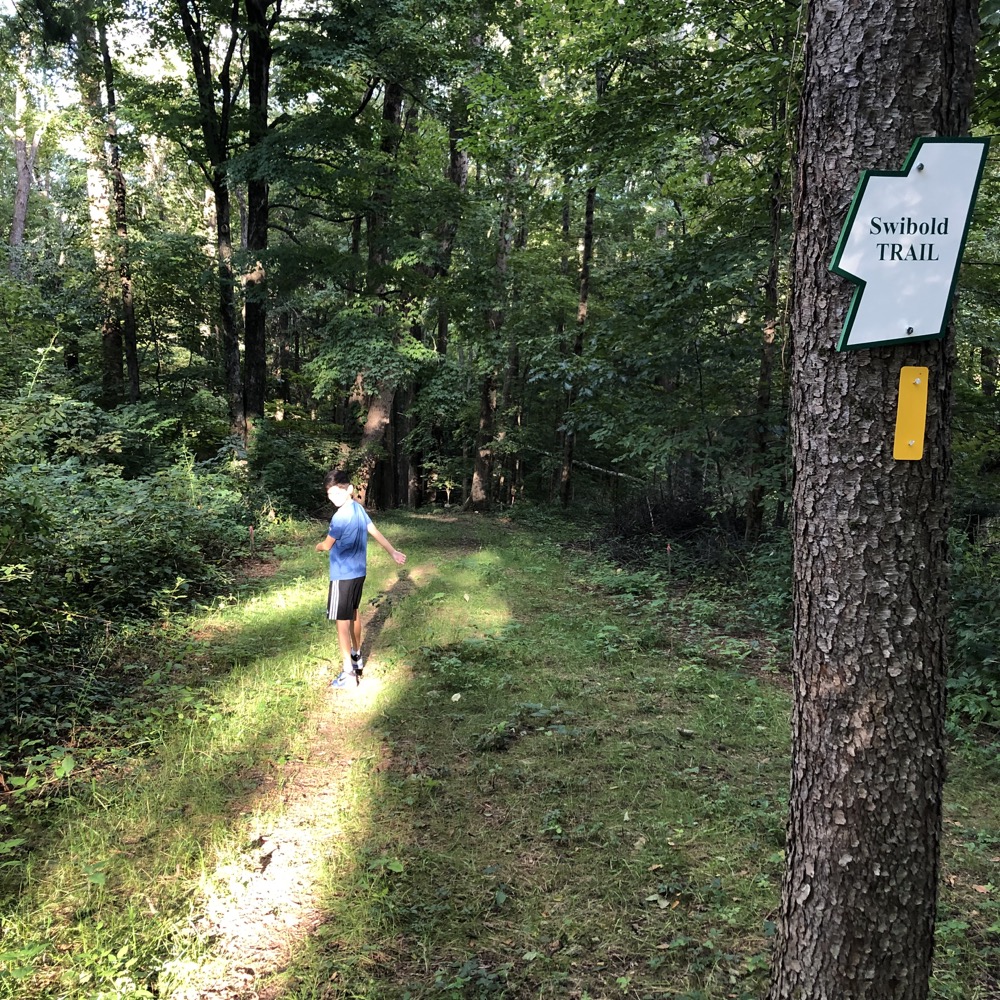 Why “bold?” Because who knows what I’ve missed or what will open next month or next year. This applies to every town I “complete” of course, but I’m harping on it here because I “completed” Canton a month ago. That is, a month before I hiked the Swibold Preserve in rugged North Canton.

Turns out, the Canton Land Conservation Trust cleared and blazed this lollipop loop trail in the time between my “completing” Canton and getting around to writing my feat. Ridiculous?

Super ridiculous. (On my part, If that’s not clear.) 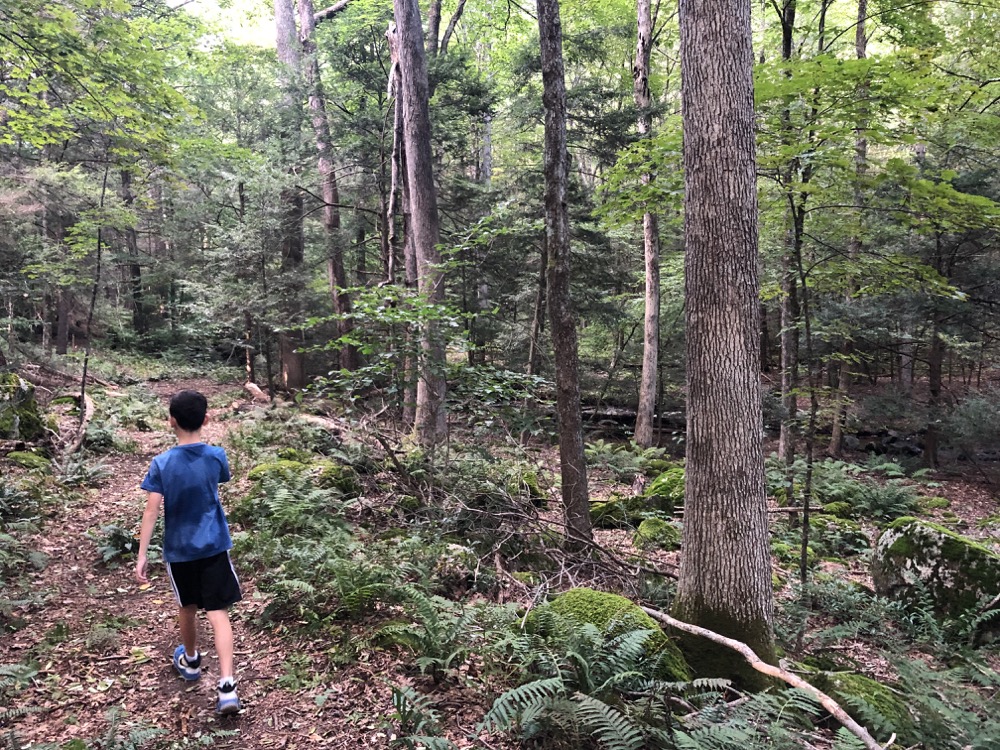 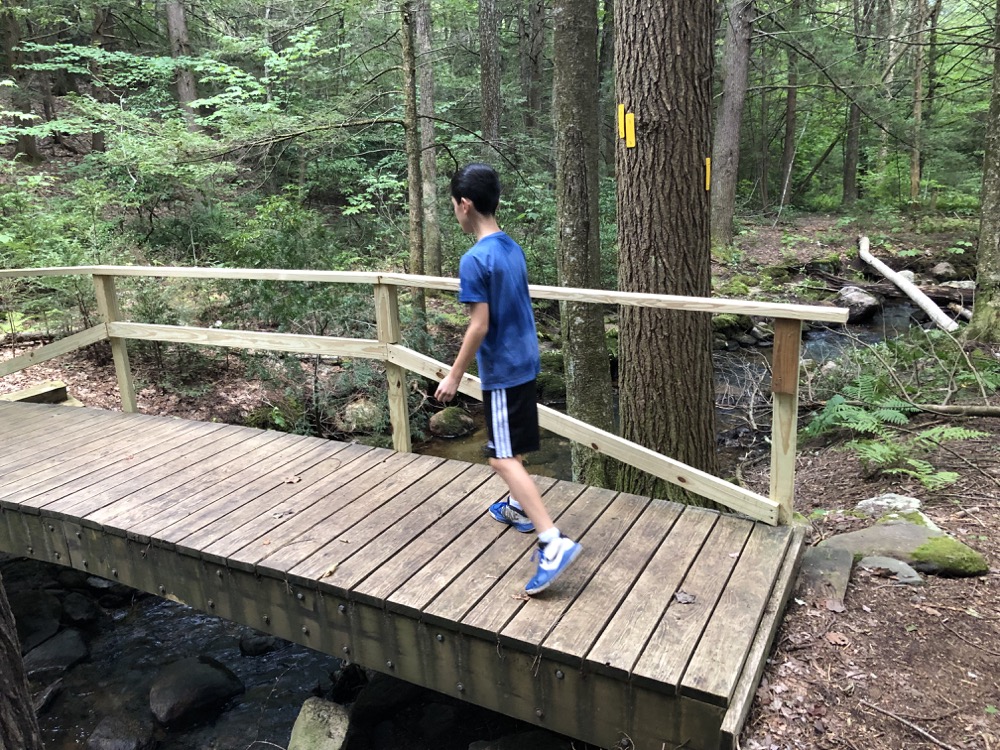 So here we are, hustling to the trailhead after work in early September because I want to bleeping complete a bleeping town! It’s been too long. At least the yellow-blazed Swibold Trail is fun and pretty (and short and easy, but that should not be positive trail criteria.) It’s also 25 minutes or so from my house, allowing for me to do what I “had” to do when I “had” to do it.

The Swibold property is an 11-acre parcel generously donated to the land trust by Dick and Gretchen Swibold in 2018. In 2021, CLCT constructed a parking area just off the road and a looping trail through the woods and along Cherry Brook. Although the trail is only 0.6 miles in length, it is one of the more picturesque hikes in the CLCT network. 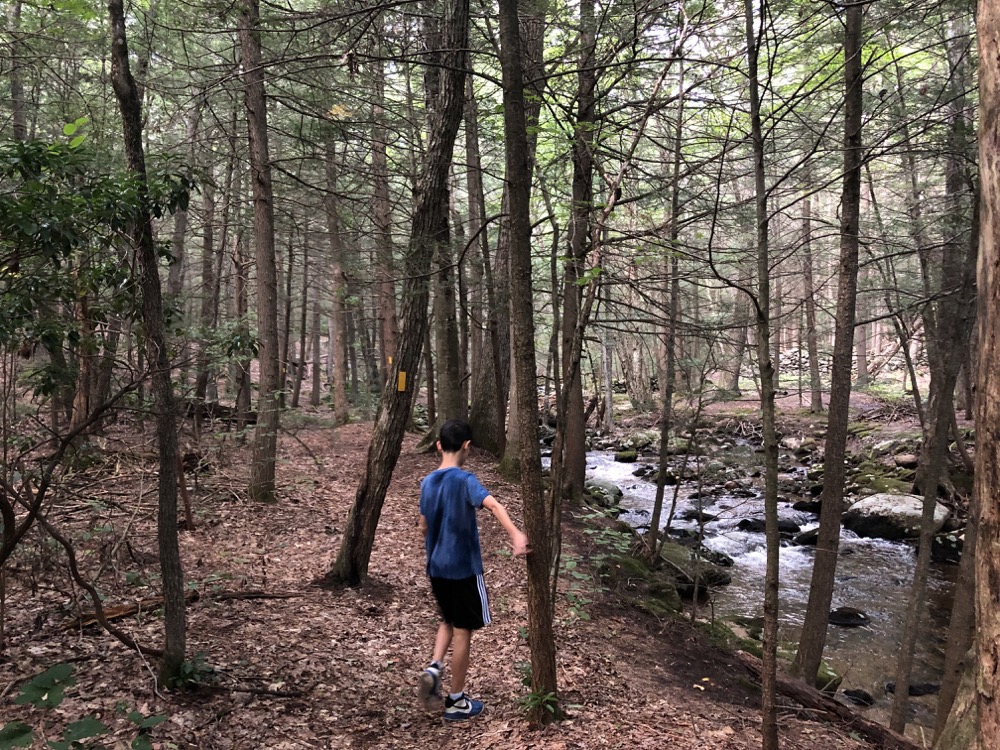 Aw, don’t sell yourself short, CLCT. Almost all your properties are equally picturesque. (Though I strongly believe this trail is a little longer than 0.6 miles.)

The parking area along Route 179 is a small cleared area overlaid with stone. That stone hadn’t yet settled when Calvin and I arrived and it was a bit rough. You’ll have a better experience, I’m sure.

I had billed this as short and quick to Calvin so he shot out of the car and down the hill. Across the new bridge and immediately counter-clockwise onto the loop. When I asked him why that direction he simply said, “right is right.” Okay then. 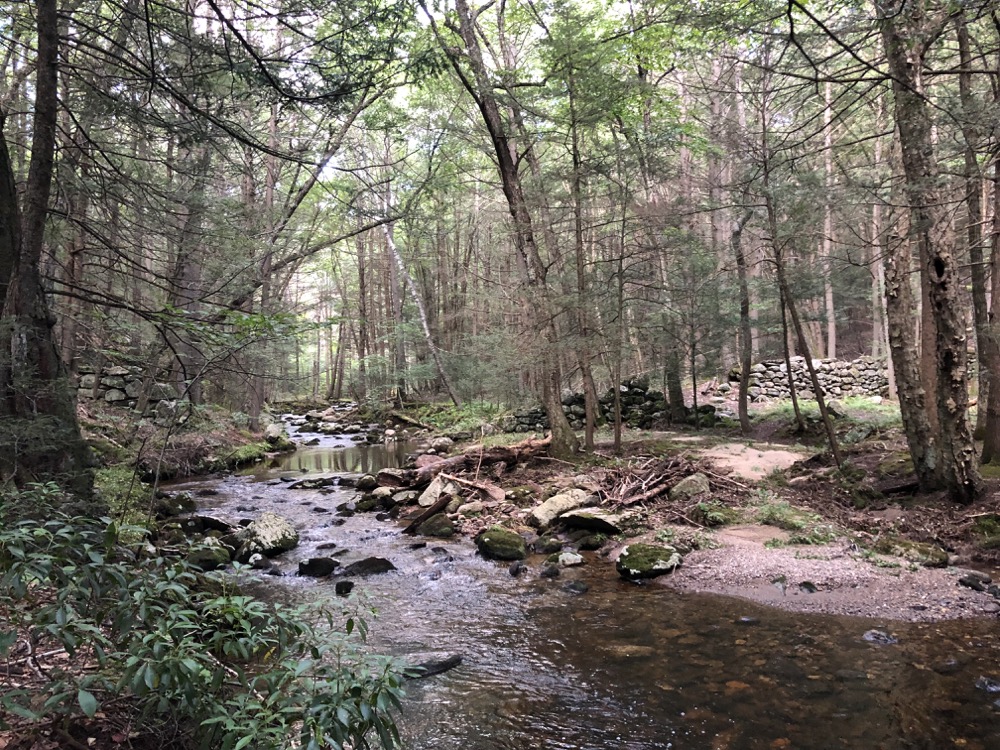 Freshly cut trails feel different from established ones. Maintainers must fight certain plants that refuse to die the first 17 times they clear them. The soil is loose as it hasn’t been compacted by hikers yet, and one can immediately tell where the trail takes a less natural curve than humans would want.

This trail was underwater a week ago during the Tropical Storm Ida remnants, but so were probably 50,000 other trails from Pennsylvania to Southern Maine. Here, it’s Cherry Brook that overflowed its bounds. This hike is similar to the (also newer) Goedecke-Humphrey Trail a little bit south of here. Cherry Brook is just a pretty stream and I’ll be happy with every CLCT trail they build next to it. 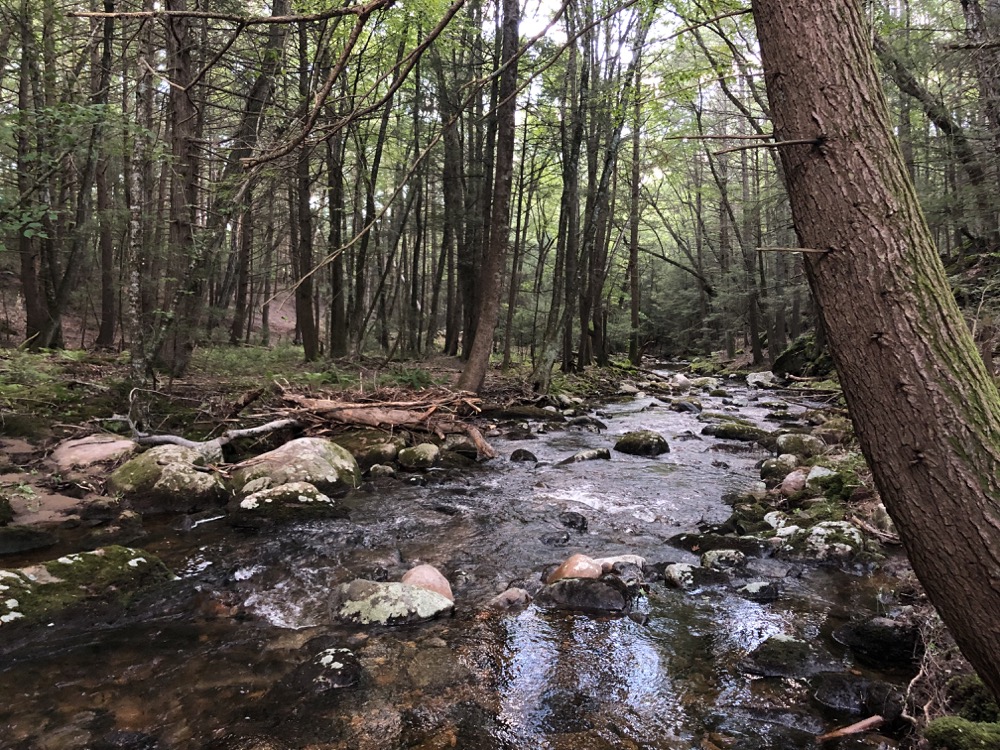 Near the end of the stretch along the brook, there are remnants of an old dam that was used to power 18 and 19th-century mills. It’s impressively large and I have no idea why it’s so big, but maybe Cherry Brook was Cherry River before other damming upstream or something.

From the dam we jogged up the one uphill bit, curled back around to the bridge and raced to the car. (Calvin had somewhere to be, so all this running was sort of the plan.)

Nice short little trail and it’s great to see organizations like the Canton Land Conservation Trust so active. But please, let me say I’ve hiked all your trails for at least a month or two before you open a new one! 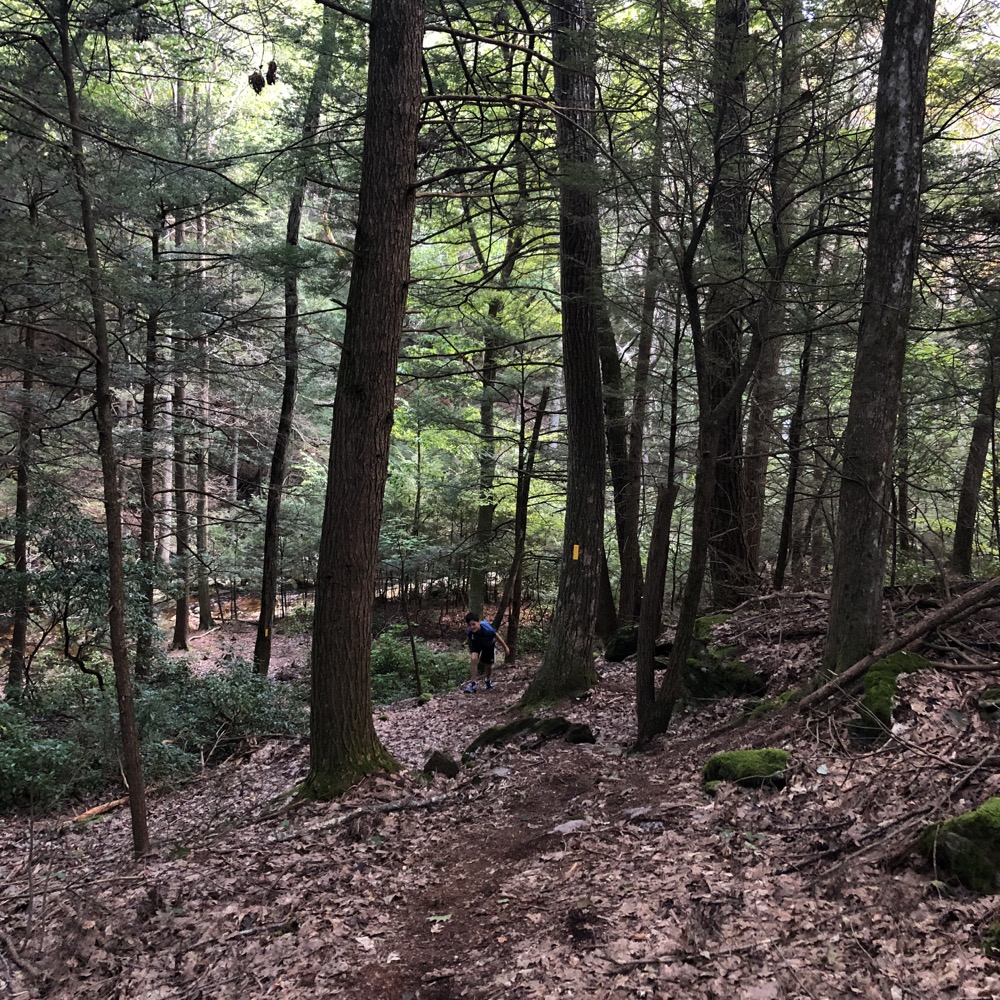 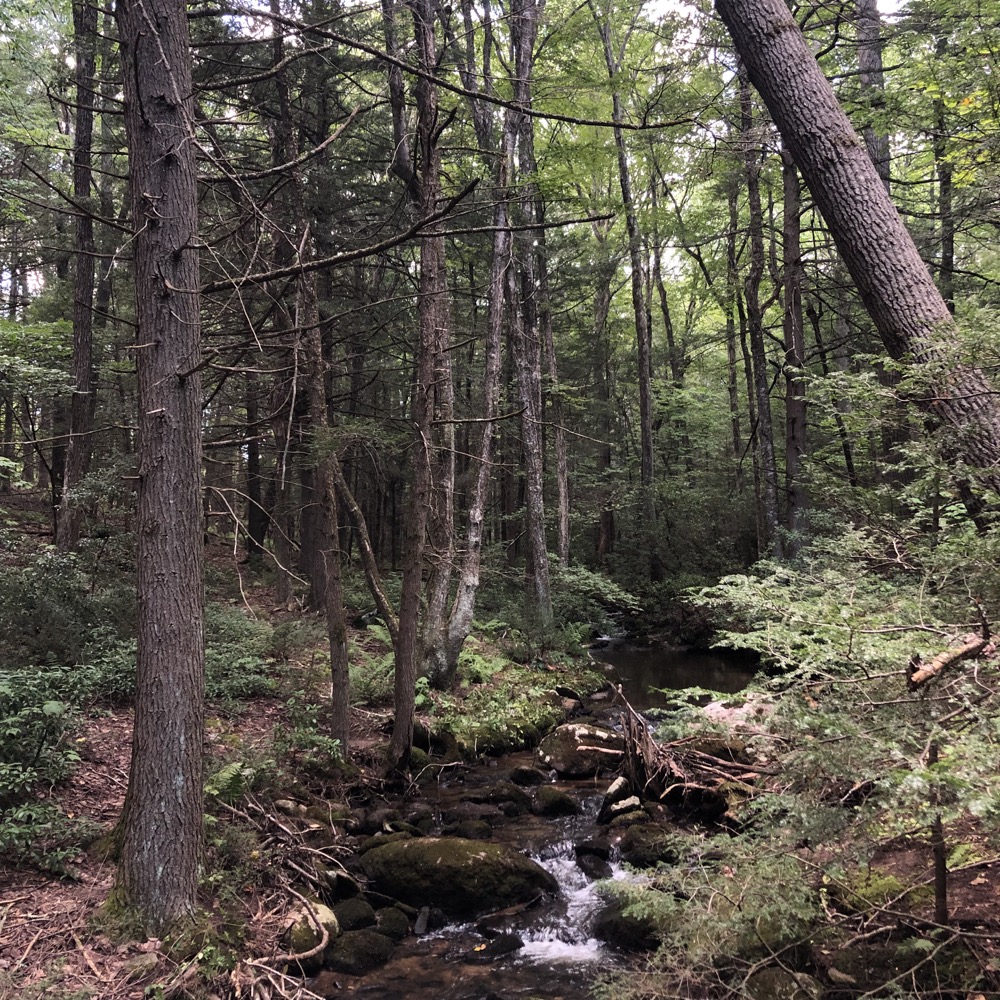