This page only describes the trails at the state park, which were hiked for 2016 Sky’s the Limit DEEP challenge. Mianus River Park is an attached town park that also straddles Stamford and Greenwich.

Longtime readers know that “Mianus” has been fodder for jokes forever. It’s just too easy. (As in, “My anus” which is sort of hilarious. Oh sure, I’ve made those jokes and may again when I explore the whole of Mianus River Park and the Treetops area.) This whole parcel is a mess from an ownership/naming rights standpoint – but in the real world, it’s a gem of a property. 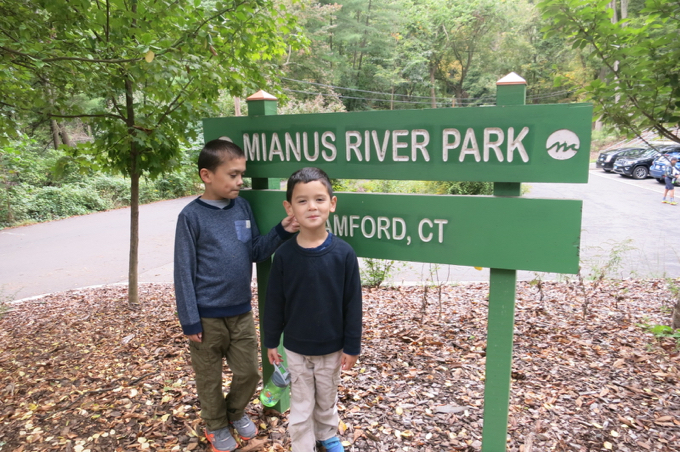 The area is correctly pronounced “Mee-annis” and these Sky’s the Limit pages on CTMQ are for families to enjoy. So whatever you do, don’t Google “Weiner in Mianus” or anything like that. Monsters. 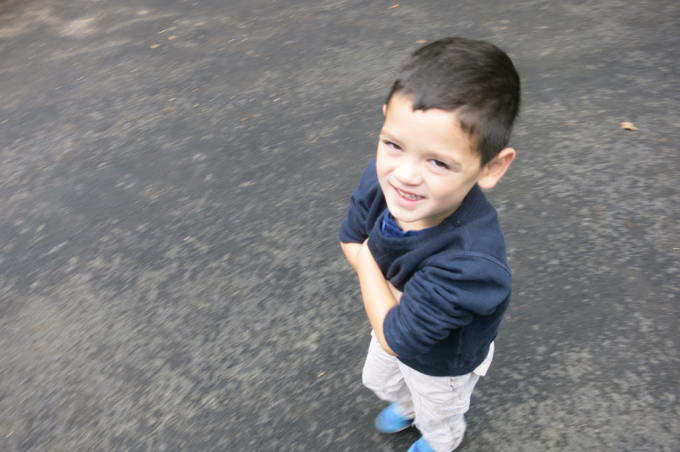 It’s been a while since I’ve discussed (one of my special needs son) Damian’s impossible behaviors. If they are impossible for me as a 44-year-old, imagine what it’s like for little brother Calvin! After the long drive to the hinterlands of western Stamford, we hit the trail. The first bit is along a road which is actually driveway for a wealthy person. Dozens and dozens of people walk his driveway every day. 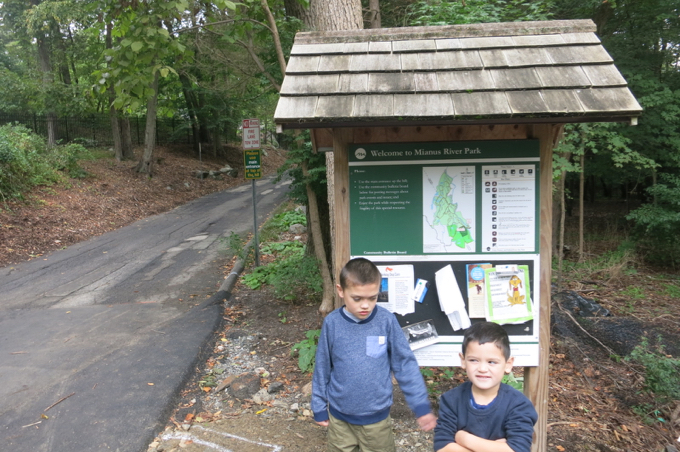 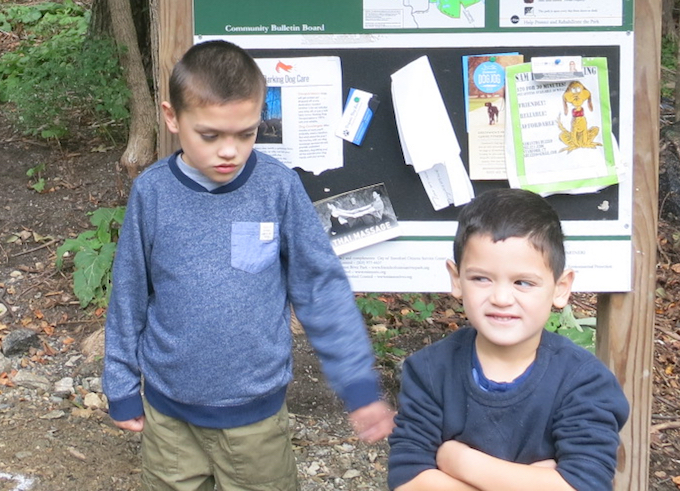 As you may know, when things disrupt Damian, his response is to scream and yell and shut down and hit himself in the head and face. We made it to the first sign (above) and Calvin wasn’t giving in. He wanted to cross his arms, darnit. In the picture you can see Damian reaching to “undo” Calvin’s arms in order to make his world “right” again. Calvin is eyeing him warily.

Meanwhile, I am just trying to take a dang picture. When you have a child like Damian, you must pick your battles. If you give in to one of these random “issues” that pop up every other day, it becomes sort of an OCD “thing,” and we’re tired of OCD things with him. Trust me, I know my child better than anyone. 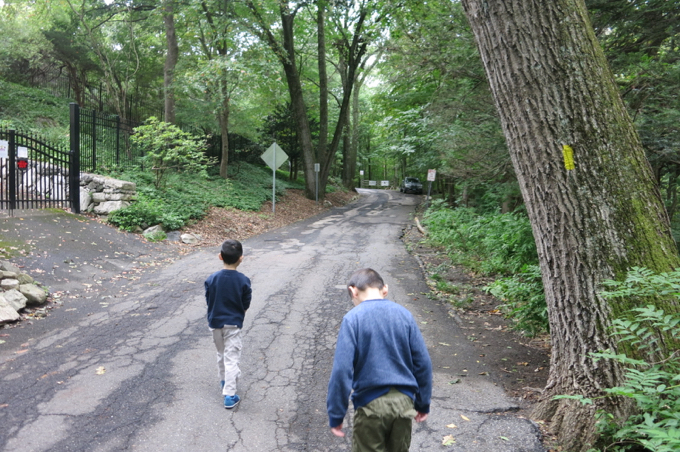 We walked up the road and Calvin stuck to his guns and Damian stuck to his. I had to constantly prod Damian to move forward. To tell him that Calvin crossing his arms is okay; everyone does it. That he can’t tell his brother what to do. Keep walking. 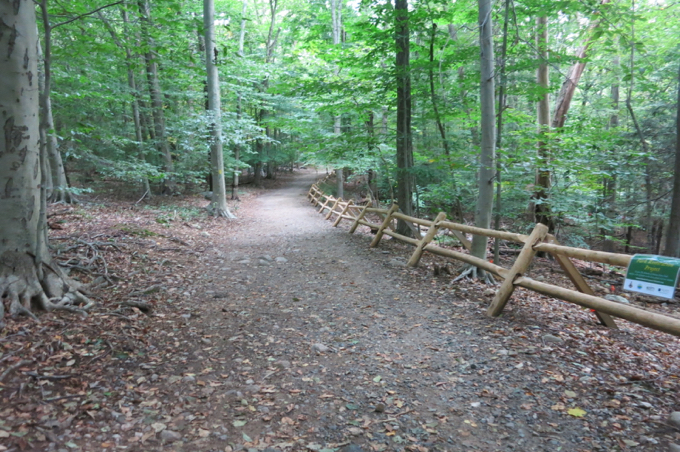 This place is clearly well-cared for and maintained. The trails are very well marked, clean, and cleared. And the fencing along the main entry trail is quite lovely. Damian was still melting down, but walking forward. Calvin was still being the little brother he is – which I have no issue with most times.

We turned off the main trail (no longer paved) and up the hill towards our TSTL goal. Walking up a hill with crossed arms is pretty hard… unless you are determined to keep doing it because you are being a pesky little brother and your older brother needs help getting over such ridiculous things. 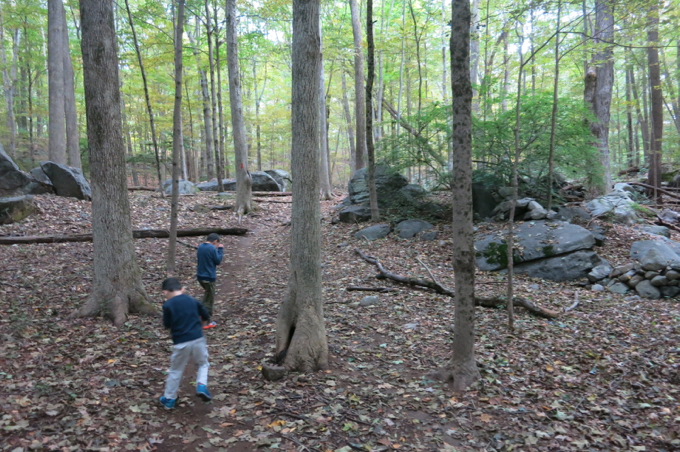 If you look closely at the above photo, you can see Damian’s balled fist approaching his forehead. Crazy, right? I know it makes NO sense to you. Why would I allow this? Why would I take such a child hiking? Why wouldn’t I do everything within my power to stop it?

The answers to those questions could fill a book. I’ll do my best in one paragraph.

Damian is not “crazy.” He has Smith-Magenis Syndrome. Self-injury, which isn’t too violent the large majority of the time with Damian, is the SMS way of dealing with many things – excitement, anger, fatigue, misunderstanding, and then whatever category you’d put the situation I’m describing on this page. Damian is my son and I love him unconditionally. SMS is his syndrome and I do not love SMS. I try to separate the two, as weird as that sounds. I take him hiking because it’s good for him and we have great times doing it. I allow it to happen because it happens every day, multiple times a day. It cannot be stopped. It just “is.” Calvin hasn’t known any other life, so it doesn’t really phase him either. Lastly, it doesn’t last too long and we go about our hike and day with minimal issues. 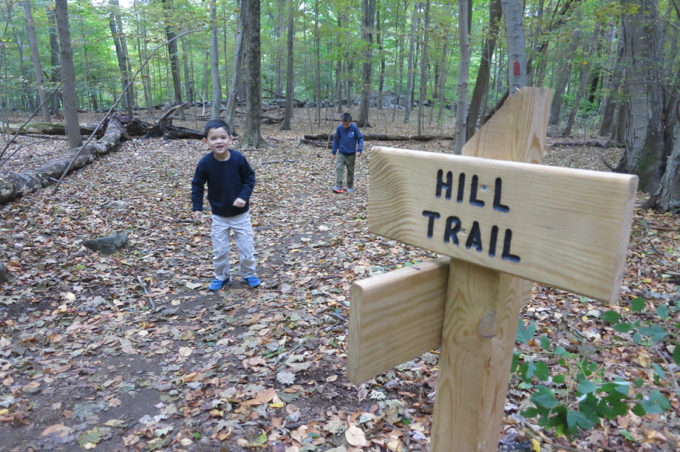 See? At the first trail intersection, Calvin was all done with his arms and Damian was all done with his behaviors. The rest of the hike progressed fine and then we went to the Glass House Visitor Center with tens of thousands of dollars of art and I wasn’t worried in the least. Again, I know my son. I know when things are about to go south, and when we’re okay. 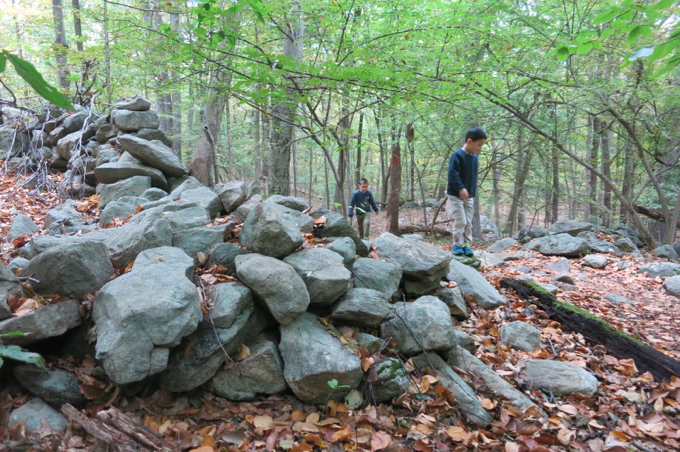 There are rocks here, so Calvin was happy. 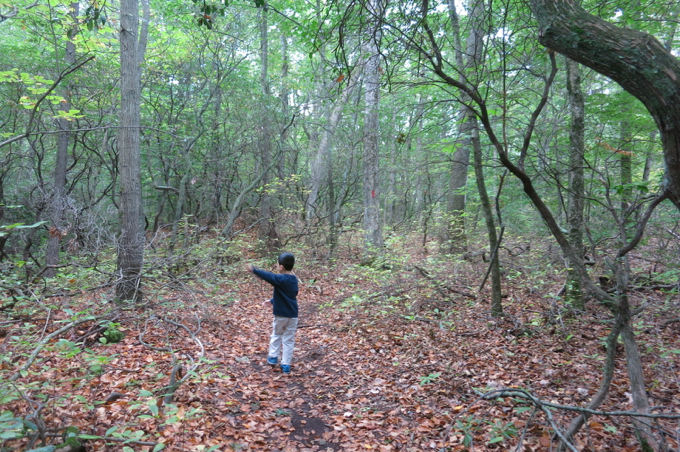 Calvin was just dancing down the trail… 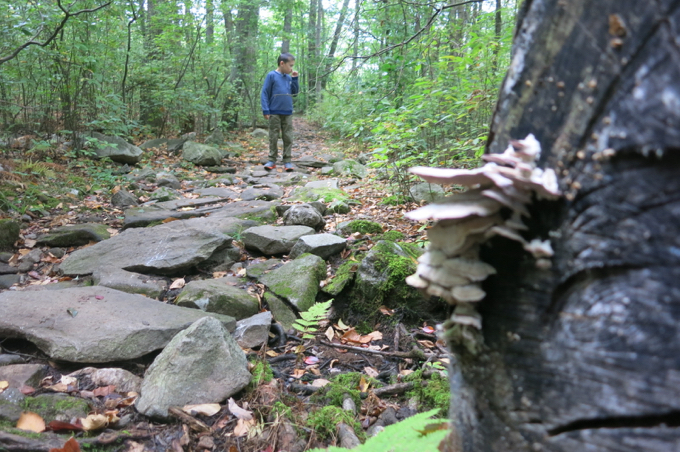 … and Damian was enjoying himself as well.

And since I promised not to make any “Mianus” jokes, I’ll just say, Calvin thought this Mianus tree resembled a balloon knot. 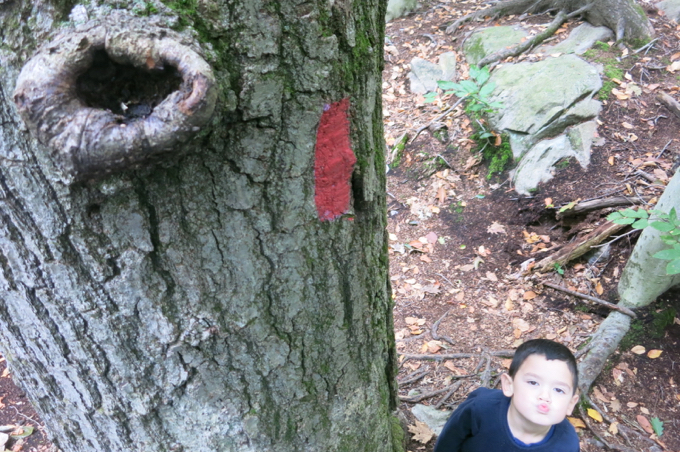 I can’t even think of any kind of Mianus joke here anyway. Nope. None at all.

We wove our way around the trails of the park and found them quite fun. About half of our hike was in Greenwich and half in Stamford. Which is not remotely important. As we approached the Challenge spot, we noticed that autumn was nearing its inevitable arrival. Which, again, isn’t important. I just like this picture. 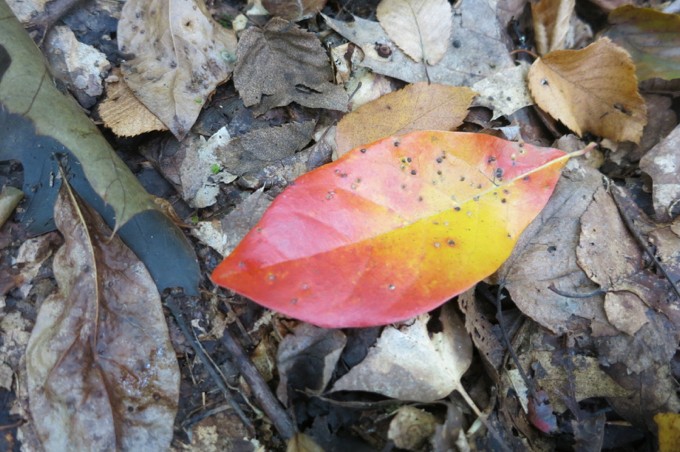 We had to find an old hearth. It was sort of off a main trail atop and hill and… who am I kidding, it was easy to find. 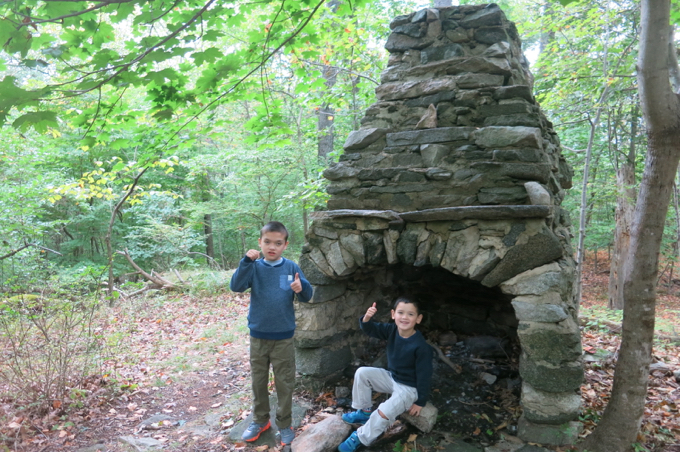 TSTL 11: Done. Well, not really. We still had to walk back to the car.

On the way back down the hill, we passed a large, angled boulder. Calvin, still calling himself the “Rock Ninja,” attempted to run up the rock’s slippery face a couple times. He never made it all the way up. 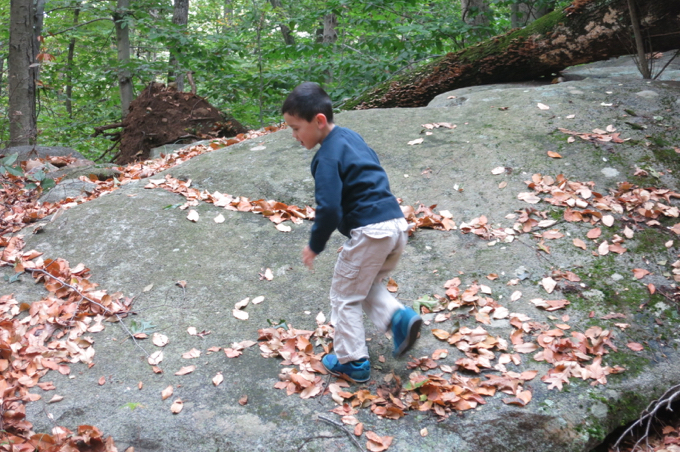 I’m showing you that picture to set up the next one. You were concerned about my sons and perhaps wondered if my parenting needed some help. After Calvin’s attempts on the rock, Damian – yes, the very same Damian who is more or less terrified of unstable ground or being more than a few inches off of it – tried to scale the rock himself. 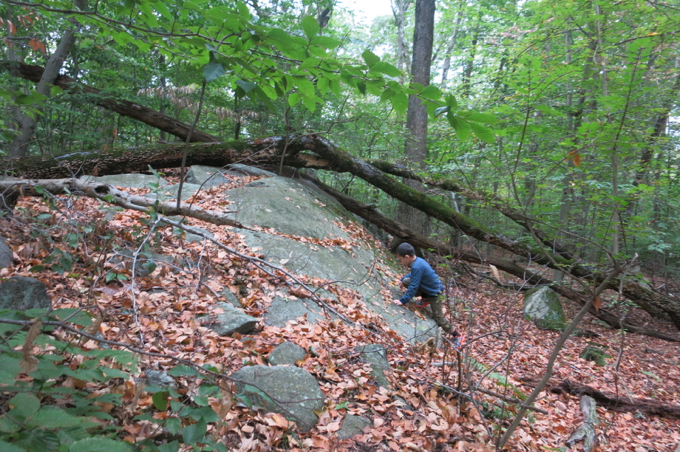 No, he didn’t get very far, but he tried. This is a new thing. This is a leap forward for him. This is a brother watching his brother do something “cool” and wanting to try it for himself, even though it was out of his comfort zone. So to answer all those questions above: This. This is why I continue to take Damian hiking. I realize this wouldn’t even register with parents of typical kids, but that picture just above is HUGE for me. 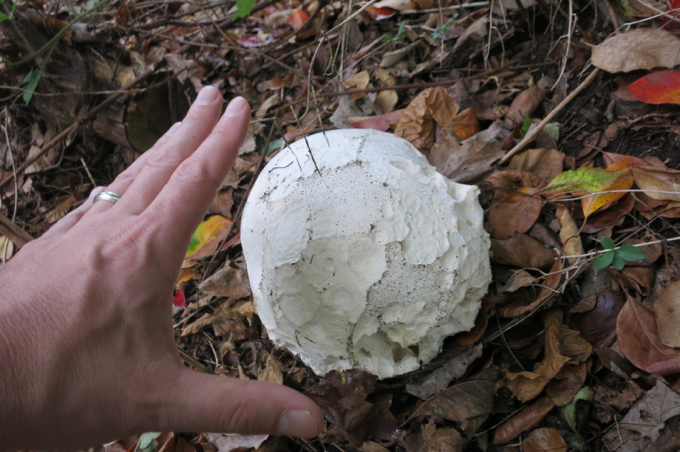 Did you know these things are edible? Me neither. But real chefs in real restaurants harvest and fry these things up for diners. I found this way more interesting than I should have.

Giant puffballs get to be much larger than this one in Mianus, but this is the biggest one I’ve seen in Connecticut. 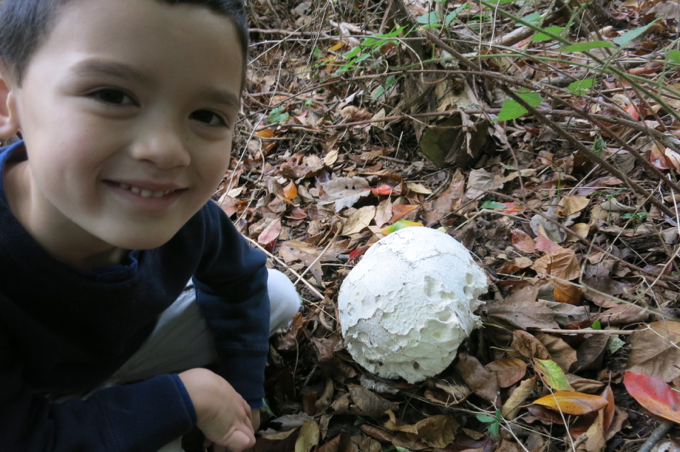 We weren’t done with fungi yet. As we made our way back to the car, back down the long driveway/road/trail, a stink filled the air. I noticed a veritable forest of stinkhorns off to our right. 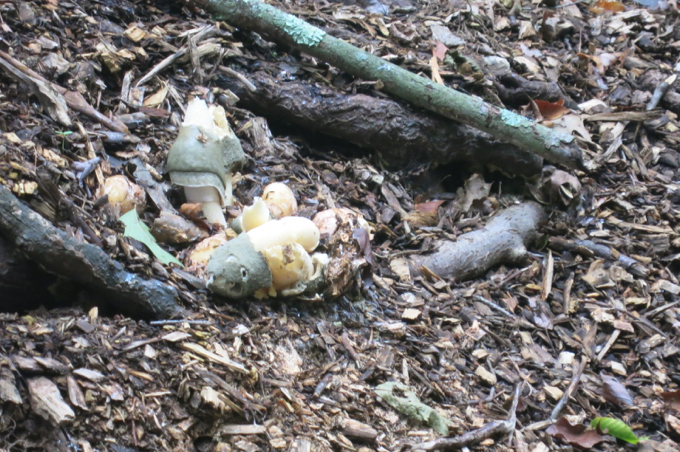 Stinkhorns are just so gross. The look gross and they smell gross and they feel gross. Fortunately, we were able to erase the memory of the stinkhorns down at the Mianus River that we crossed again and enjoyed for a few minutes. 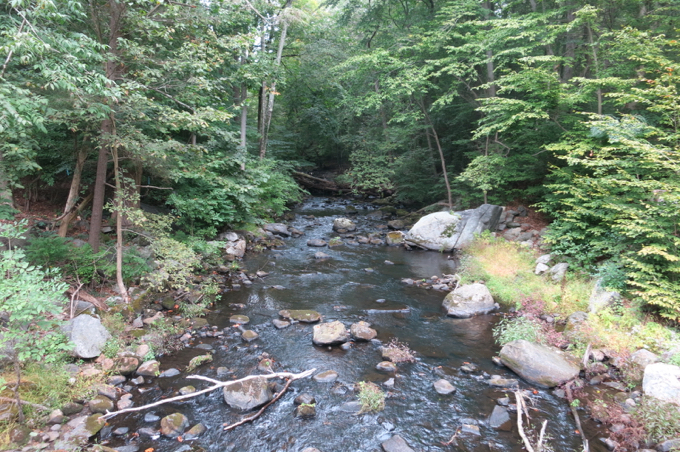 As I mentioned, we didn’t drive all the way to Stamford and just come home. We made several stops on our way back up and had a grand old time. And we can be proud of ourselves for going in and out of Mianus without making any of the obvious jokes my immature friends and readers surely expected. 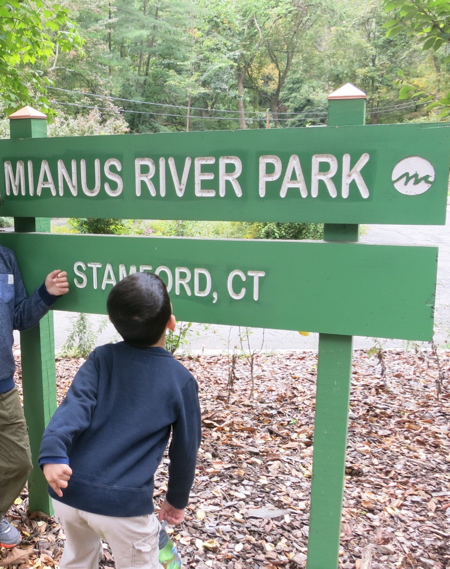 Nope. Not gonna do it.