I know the title here is Squantz Pond, but 99% of this hike was not in the state park but rather in the Pootatuck State Forest. 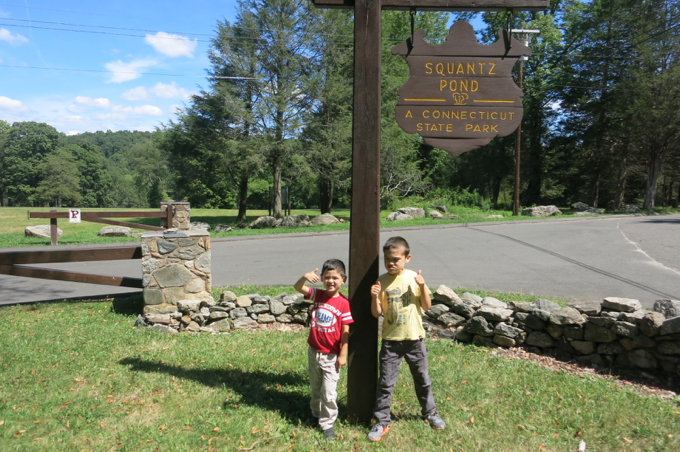 That felt good, didn’t it? Apparently Chief Squantz was a leader of the people of the Schaghticoke tribe who lived until 1724. Chief Squantz refused to sell the land that is now called the towns of Sherman, Connecticut and New Fairfield, Connecticut to a group of twelve colonists called “The Proprietors” who came from Fairfield to find land for a new colonial township.

Chief Squantz died during the winter of 1724-1725, and his four sons and heirs refused to sell the land when The Proprietors returned in the Spring of 1725. The land was later sold in 1729 for the equivalent of $300. 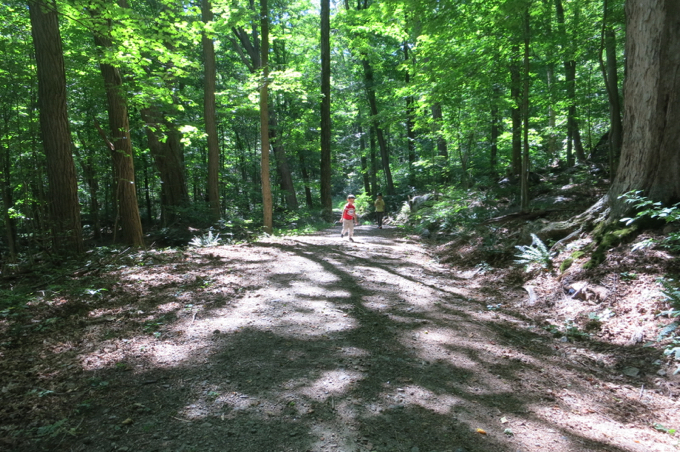 And it’s a good thing that the state and the DEEP have severely limited lifeguards there in 2016. Makes sense. 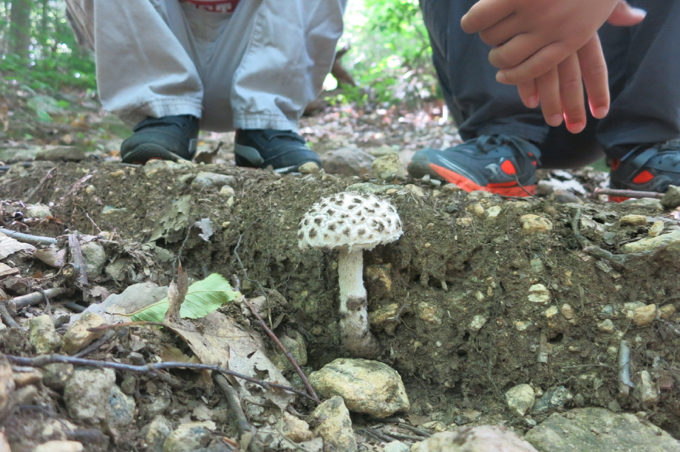 Because I’m cheap AND because I wanted to shave off a quarter mile of climb, I parked on Short Hill Road just past the park entrance. There’s space for a couple cars there and I’m happy to report I wasn’t the only one (legally, I assume) avoiding the $9 fee. In my mind, that fee is applicable to those going to the “beach” and swimming. So there. 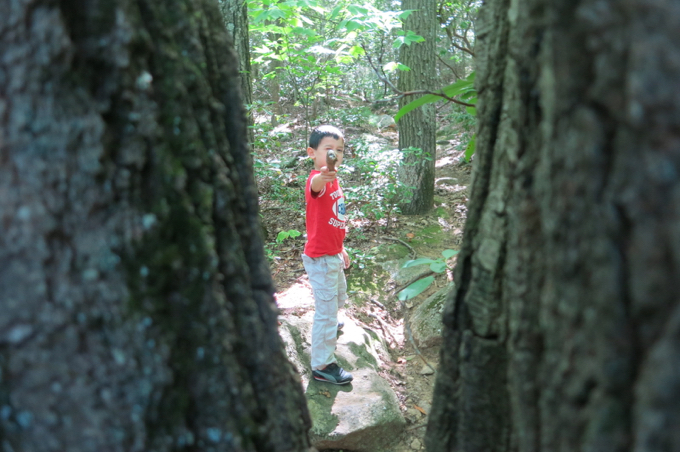 The boys and I set out along the relatively flat and wide green trail towards our goal. There are a few interesting rock features along this three-quarter mile trek, but nothing too fantastic.

Calvin was suffering from a rash in his groin area and it was limiting his enjoyment. I, of course, had no idea that this was a thing for him when we set out. Damian, as has become custom, offered a kind hug: 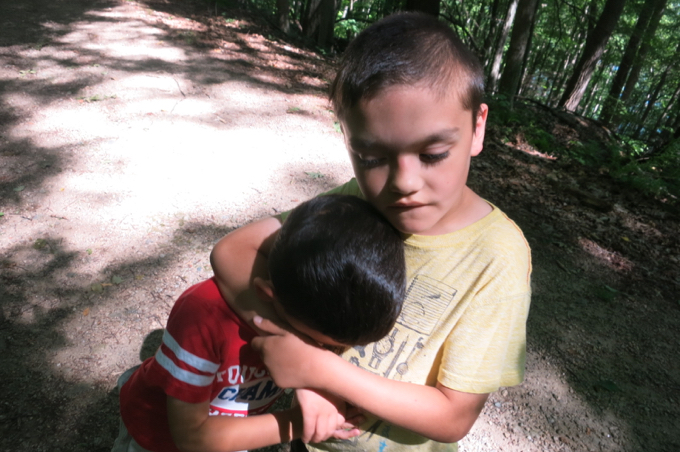 This really is a hug and not a choke hold. I promise.

I checked out the area in question and it didn’t look very red and angry, so we pushed on. I am an ogre… But an ogre who drove all the way out to the backroads of New Fairfield near the New York border who really didn’t want to do that again after the little rash cleared up. 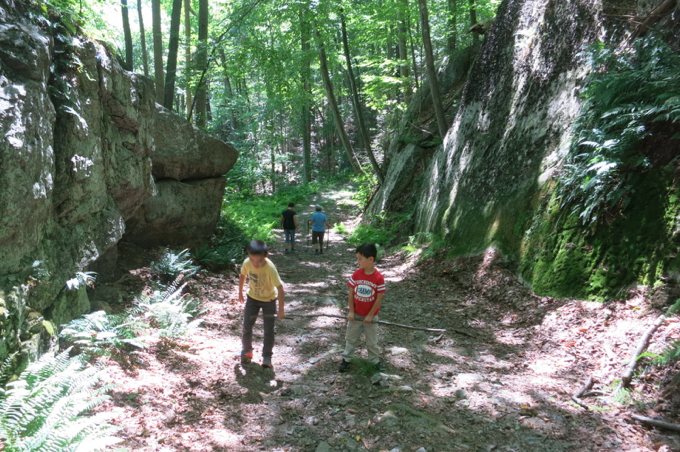 As we walked through a cleaved cliff area, an Asian family approached us. My fellow fee-avoiders! I felt an immediate kinship. They asked if we were “going to the top” and I said “that’s the plan” and they told Damian and Calvin, “Such strong boys!”

Calvin ate that up and it seemed to be the mental push he needed to forget about any discomfort and I never heard about it again. Damian, as has become custom, asked them, “Are you Chinese?” 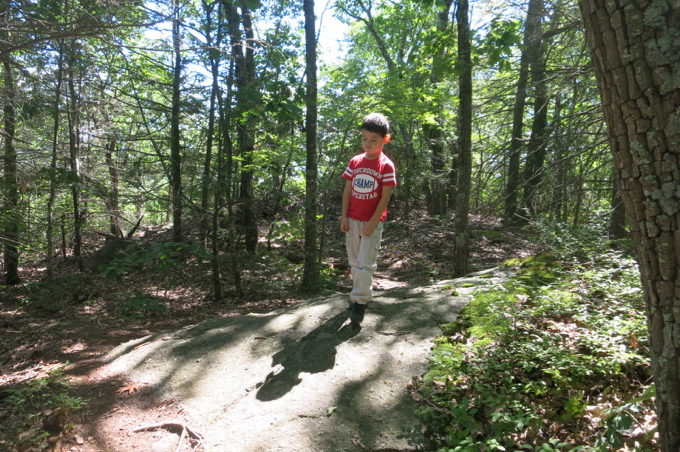 Fortunately, not many people can understand his unique style of guttural whisper-speech, let alone elderly Asian people, so only I knew what he said. I have no idea why he feels the need to call out every Asian person we see like this, but it’s just what he does.

At least he can pull out the “I’m half-Vietnamese” card if it ever becomes necessary. 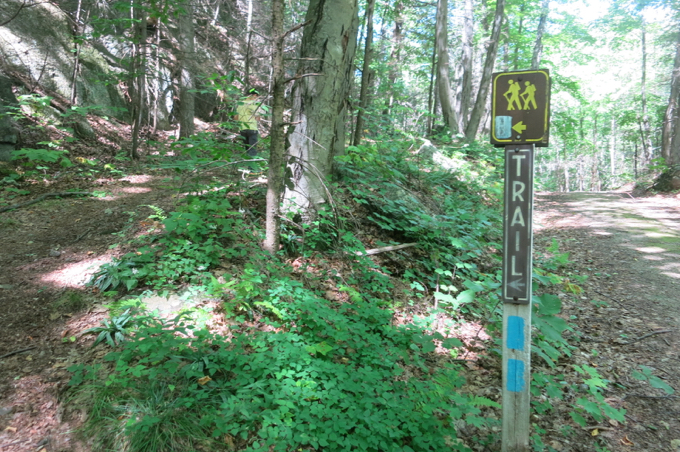 Once we reached the blue trail, we veered left and began the climb.

Then we veered left again and began the climb in earnest. 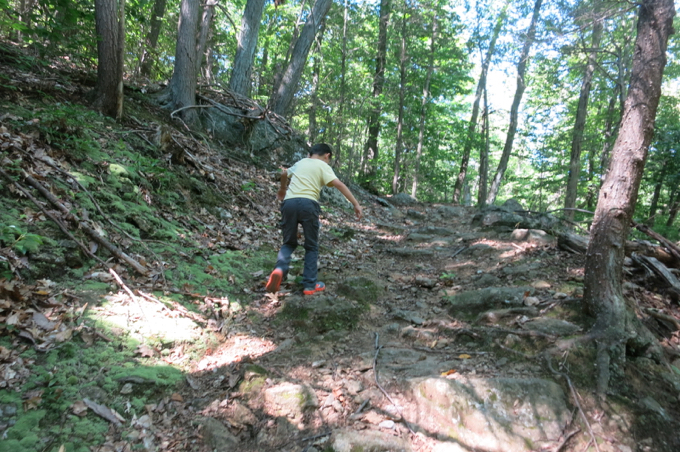 The hike up from the green trail is just a hair over a quarter-mile, so it’s no big deal. In fact, it’s kind of a nice change of pace from the flatness of the green trail.

The boys did require their juice box and snack break though, as they always do. 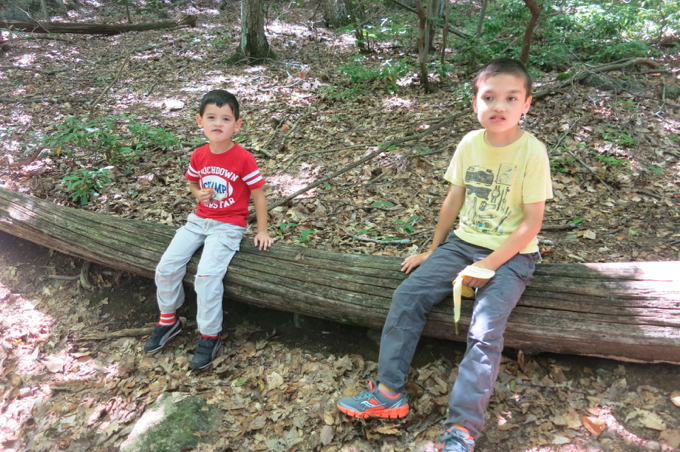 Back at it, we climbed for a few more minutes and then took the spur trail left out to the viewpoint. 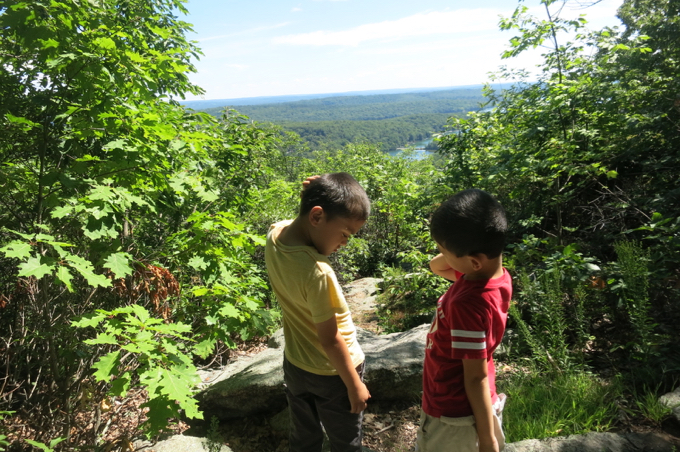 Squantz Pond offers more hiking than this most direct route to the Challenge point, but it was hot, we had driven quite a way to get here, my children are young, and we had ice cream and Kent Falls Brewing to get to. 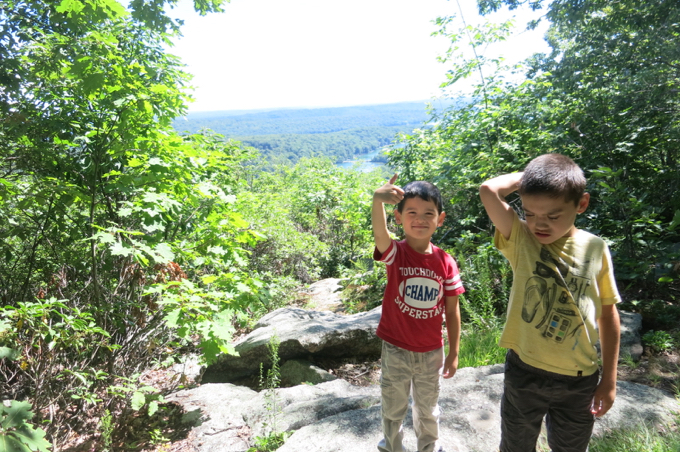 So we turned tail, bounded down the hill and trudged back out the green trail to our car.

A quick bit about Damian’s improving hiking skills… If you’ve been following along our travails and tribulations over the last five years or so since I first took him on a trail, you know that his Smith-Magenis Syndrome brings a panopoly of issues to the fore. Forgetting about the violent behaviors and diminished intellect, I’ve usually focused on his physical disabilities when it comes to hiking. 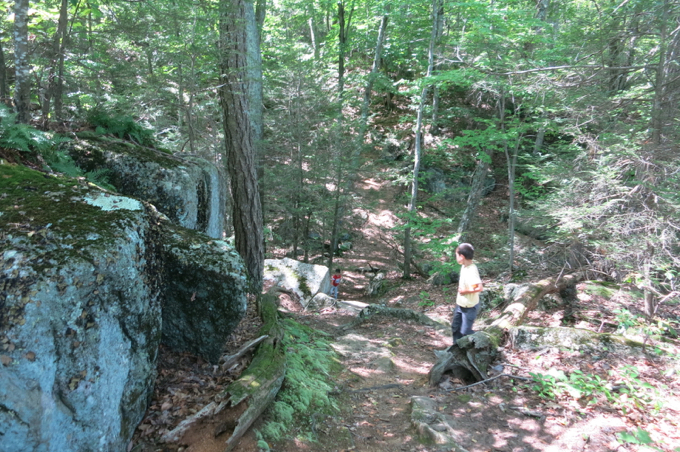 He has overcome so much. He now crosses creaks on bridges without fear. He can rock-hop across a stream with a hand-hold and a little encouragement now. He will try to climb up steep inclines now. And the latest development is that he is descending much, much better and faster than before.

I’ve carried him or carefully guided him down any sort of descent… up until this hike. All of the sudden, out of nowhere, he hopped down each drop and really had little to no issues at all. I think I held his hand at only one steep downhill at Squantz Pond.

Trust me, this is a big thing. Our descent time was improved probably 50% on this hike than what it would have been prior. I’m so proud of him. 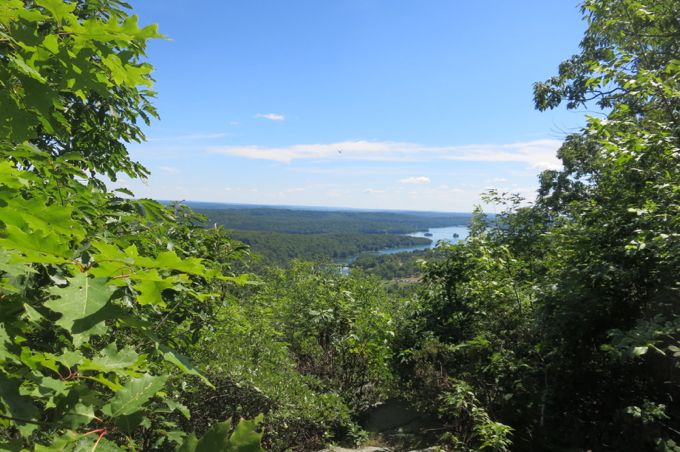 He still has plenty of issues (if a rock just slightly wobbles beneath his feet, he’ll freeze in paralytic fear, for instance) and he’s still the slowest hiker you’ll ever hike with. I still have to keep pretty close watch of him, as he’ll just keep walking straight into the woods when the trail turns. But he’s been rather amazing this year on the Sky’s the Limit Hikes, I must say.

Now I wonder… will he ever hike in a rainstorm? Stay tuned… 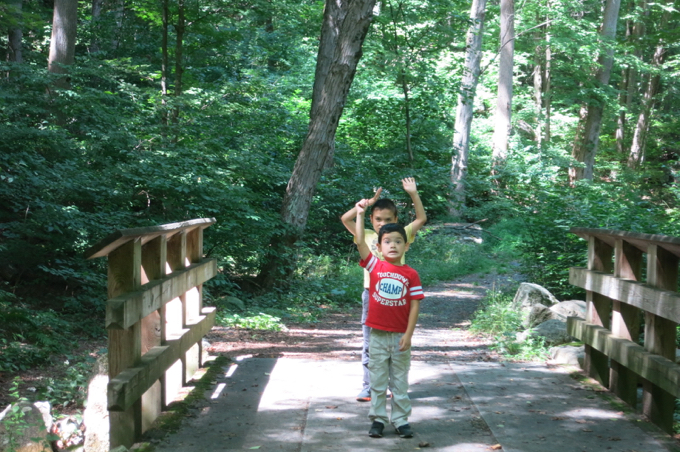