Except… except this time I had Damian with me and the docent at the house museum was magical. I wound up taking videos during my visit to show my wife and to save for posterity. I learned that a one time occupant* of this house is actually mildly famous. And I learned that the Glastonbury Historical Society – errr, sorry, the Historical Society of Glastonbury – goes all in with this museum. 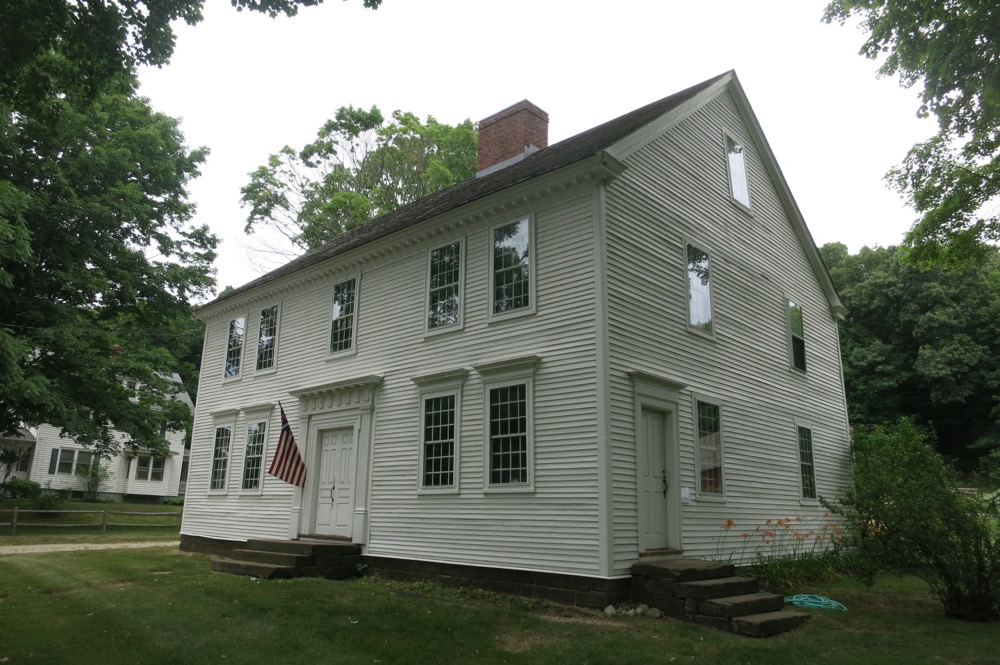 A museum which is usually only open on weekdays for a few months of the year.

The WSW house is a classically lovely 1755 River Valley Colonial Mansion. The name of the house, as is the current fashion in historic house naming, refers to the three surnames of all of the families who owned it over the years. The house was built as a wedding gift for John Welles and his wife Jerusha from his father Thomas. John Welles was a Glastonbury shipyard owner and his family lived here only for 35 years or so. 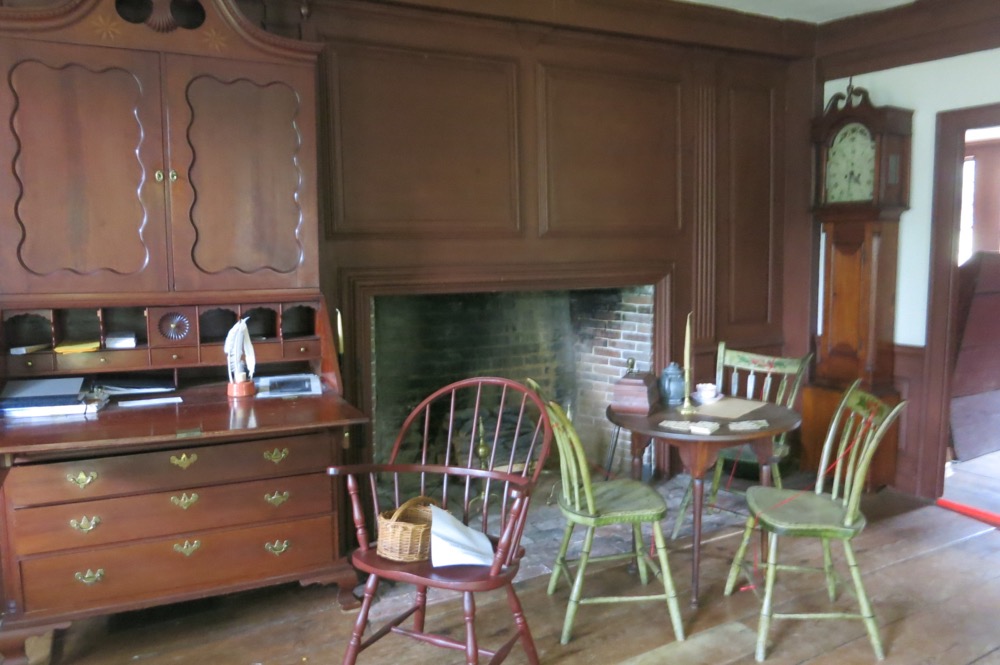 Some sources say that the Welles happily sold the house to shipbuilder, merchant trader, and storeowner, Stephen Shipman, Jr. Other sources tell me that Welles’s losses on three privateers built during the Revolutionary War forced him to sell it to two creditors, Stephen Shipman, Jr. and Nathaniel Talcott, Jr. Shipman eventually bought the entire property.

However Shipman got the property, his family owned the house for 125 years and they added neoclassical, Federal-style features. The last private owner was Berdena Hart who updated the joint in an English country style from 1929 until 1963 when she donated the house to the Historical Society. The house underwent restoration by an impressive team of folks from organizations like the American Wing of the Metropolitan Museum of Art of New York. 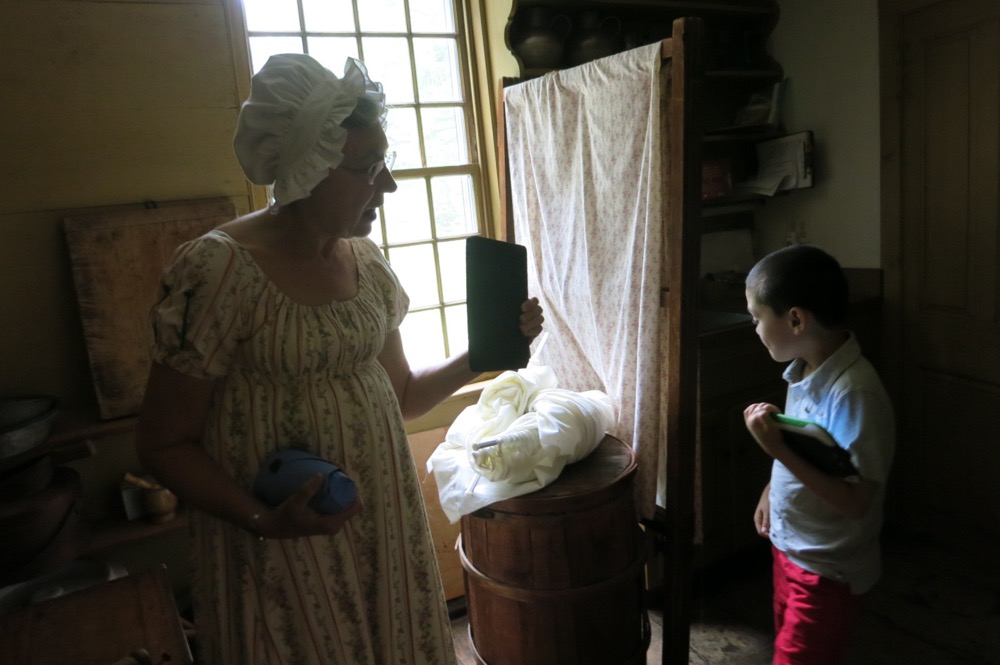 Earlier I said that a “one time occupant” of the house is mildly famous. That’s not really true. I messed up, but I’m still going to tell you that Glastonbury was the birthplace and childhood home of Gideon Welles (who was born in 1802, well after the Welles family happily sold/sadly were forced to sell the house we’re talking about, but there had to be some familial relation, right?). After a distinguished political career at the state and federal level, Gideon was Secretary of the Navy under Abraham Lincoln and did all sorts of interesting and important things in that capacity. But it matters not, because the Gideon Welles House, though it looks nearly identical to the Welles-Shipman-Ward House a hop, skip, and jump away in the same town… is not what I’m writing about.

After all, the WSW House has the largest known period kitchen fireplace in Connecticut. I mean, you can’t beat that. 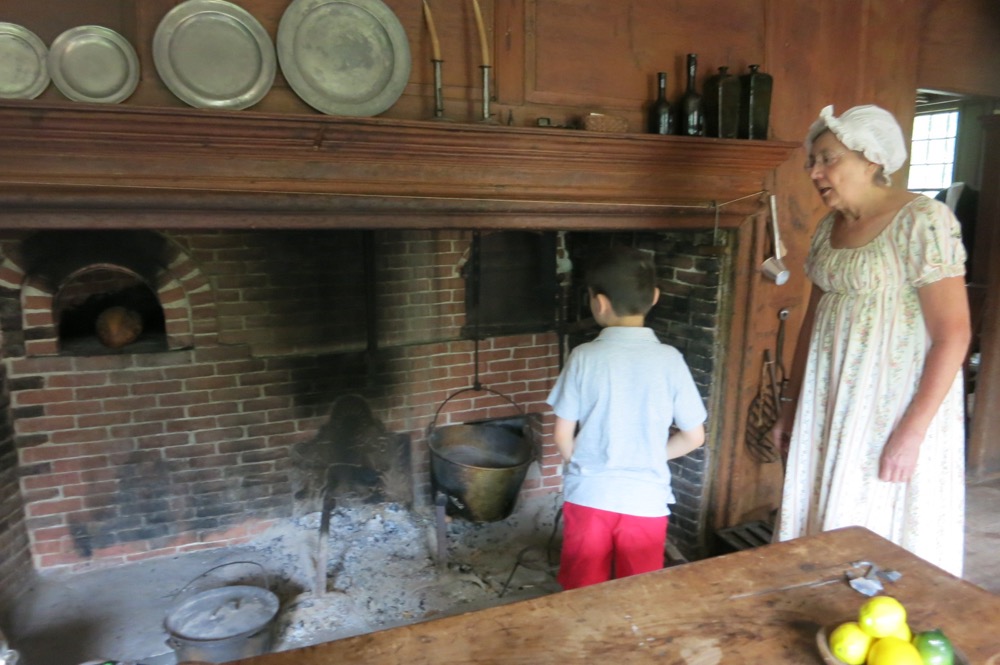 You’ve surely noticed that our guide is costumed. This was on a random July Tuesday afternoon mind you. We may have been the only visitors that day. Like I said, the Society goes all in on the rare days the House is open… and I love it.

I quickly explained to our host a little bit about my son and more or less encouraged her to let him do his thing; he won’t really interact but he also won’t touch or break anything. Certainly not the High Back Queen Anne Corner Chair they have here – one of only two known to still exist! 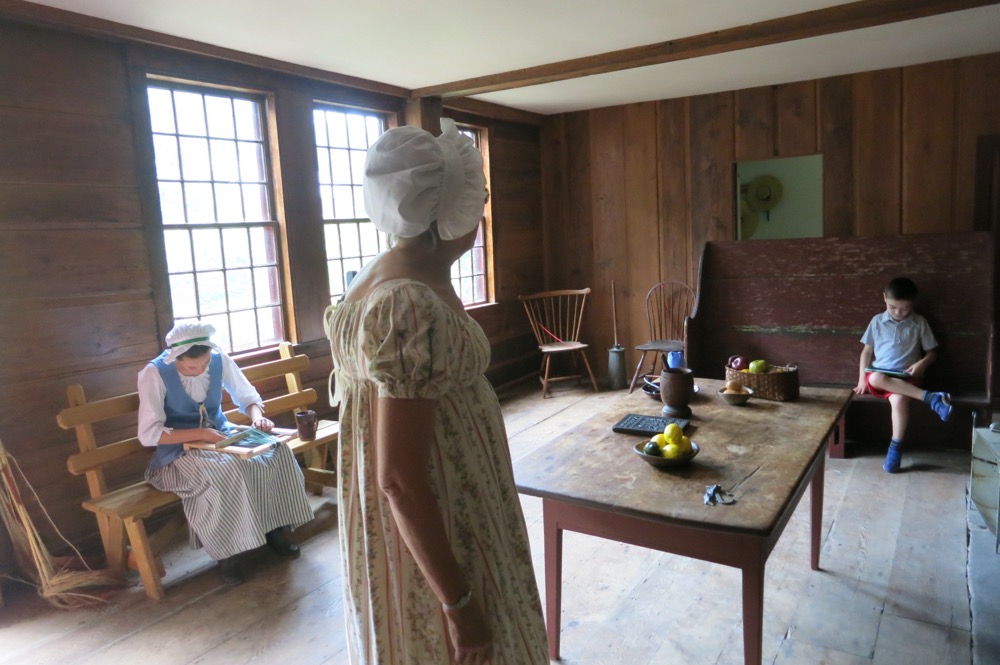 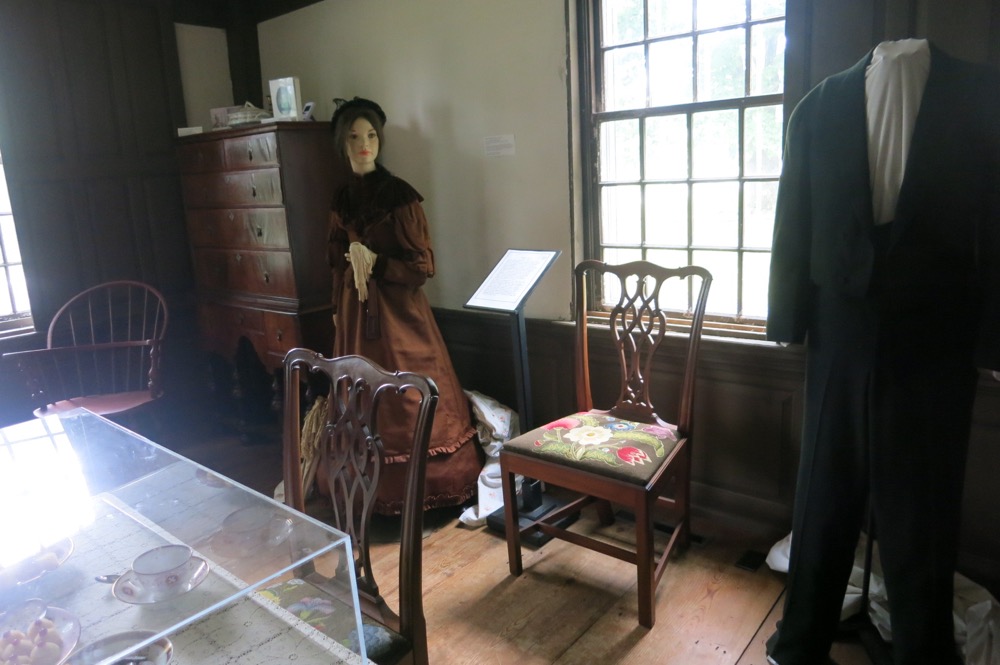 She kindly smiled and walked us through the kitchen, giving us the usual talk about 18th century cooking and shipbuilding. She was very good.

As we walked through the house, she slowly ingratiated herself to Damian. Patiently. Kindly. At 10 years old, Damian was verbal but very difficult for most people to understand. But she tried, and I acted as interpreter. Oh, she tried. And I was impressed. 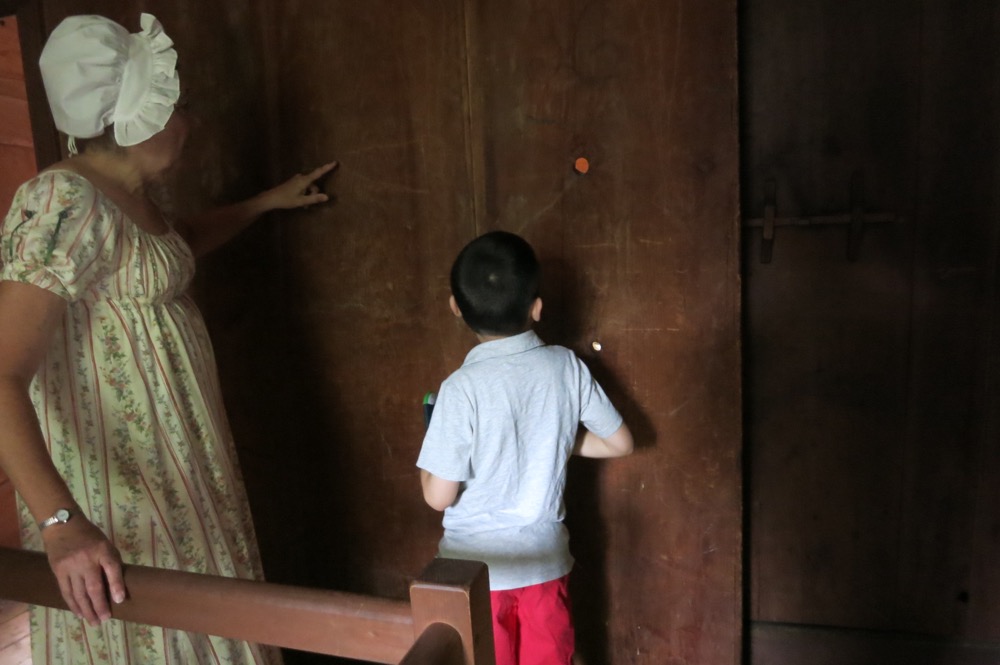 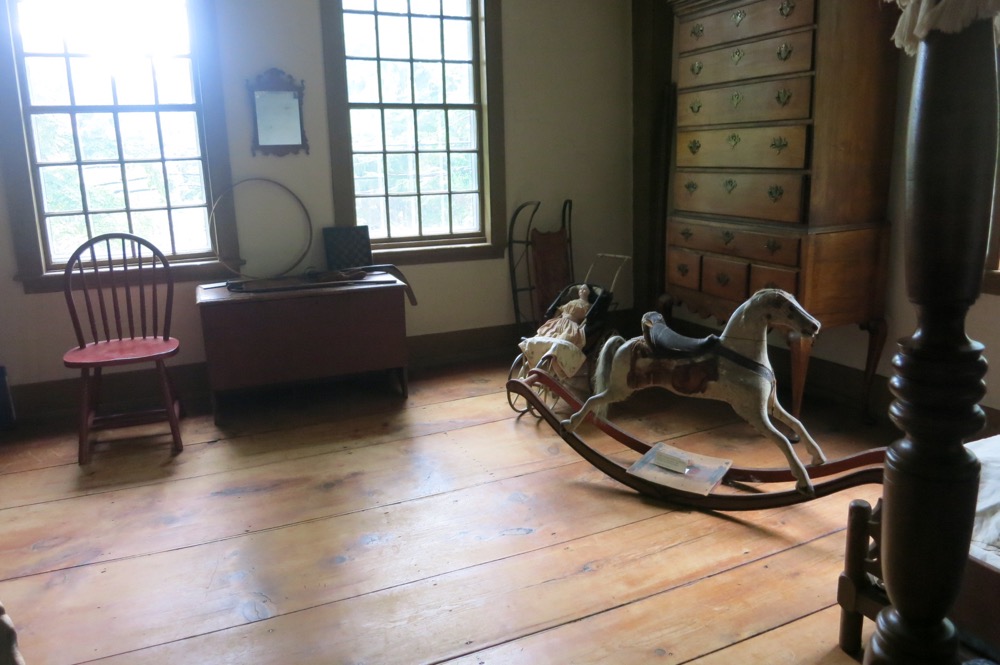 A bedroom, a living room, another kids’ room. Standard fare, though well-presented and the large windows give the WSW more brightness and “life” than many of these old house museums have. Another room holds a loom and spinning equipment. Nothing new…

Except this stuff is operational. The docent sat down and started spinning and weaving. It’s funny, these things exist in literally a hundred other historic house museums in Connecticut, but I can’t really recall a time I’ve seen them in operation.

Then it happened. Oh boy.

She asked Damian to take a seat next to her. Um, lady, perhaps I’ve not fully apprised you of what happens when my son gets frustrated… She pressed ahead. 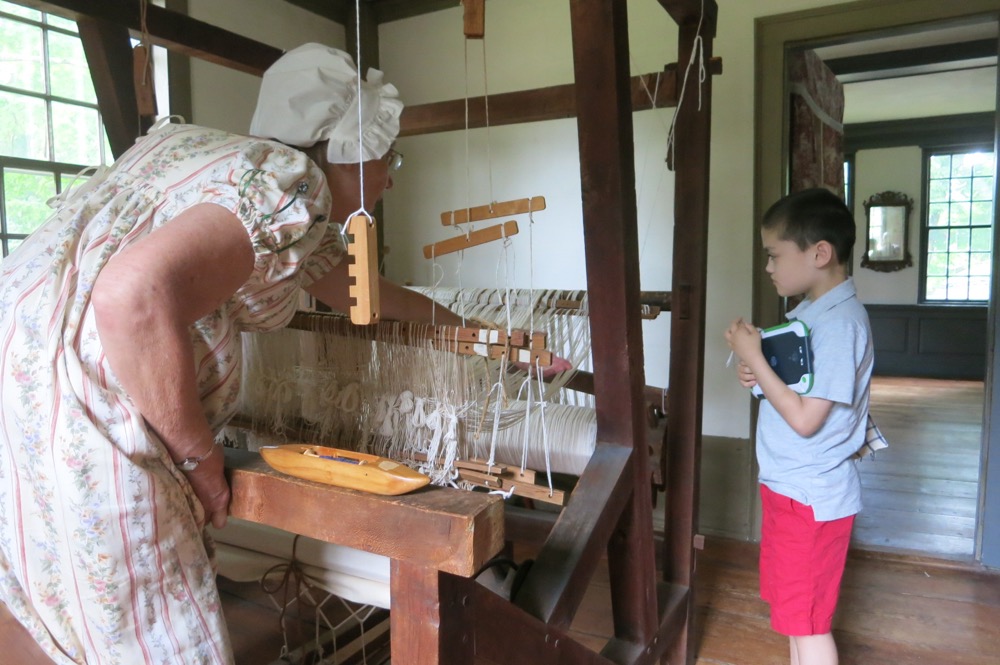 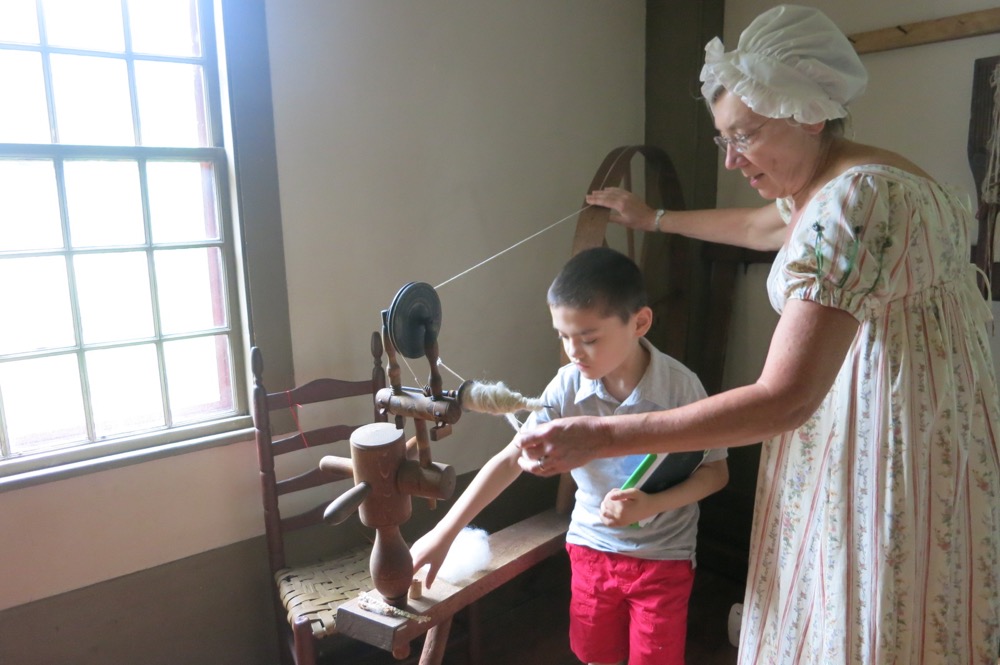 I let it happen. Very warily. Damian’s syndrome is complex and difficult. He lacks impulse control and his moods can shift in a split second. He is capable of extreme violence and destruction, and sitting right next to a gentle elderly woman and antique machinery being encouraged to participate in mildly difficult manual labor is a recipe for disaster.

But as I said, this woman was magical. Not only did she get Damian’s full attention, she got him to participate! Pulling levels and pressing pedals. Wow. Welles-Shipman-Wow. I took a couple low quality videos and just kept saying, “you have no idea. This is incredible,” to her and she just smiled and looked at me like I was crazy. Damian was a peach. 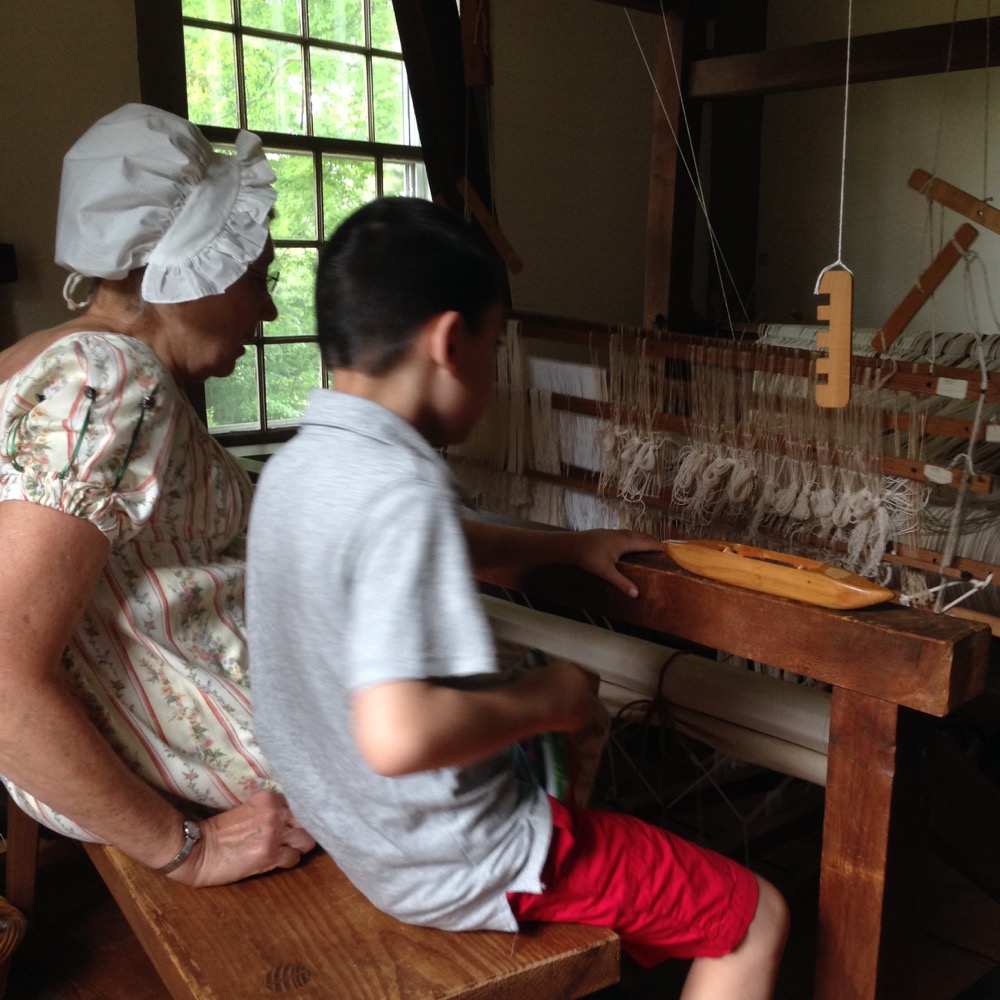 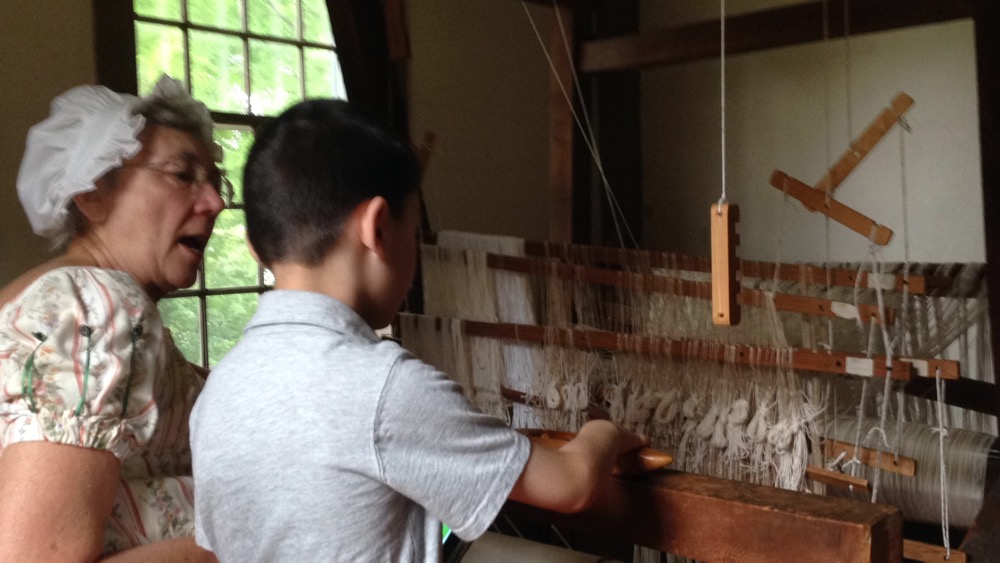 It turned out she was an educator in the school system and dealt with other difficult special needs kids. She had that innate ability to connect to mostly non-verbal kids and knew how to reach them. As for me, I will always be on high alert with Damian – trust me, I have too many stories where situations like this didn’t end up so well – but boy is it nice to let go for a few minutes anyway.

They worked the loom for a few minutes and that was pretty much it for the interior of the house. I thanked the woman profusely as she shooed us outside to the gardens and the barns our back. The property is home to an 1800 tobacco shed that will be the future home of the historical society’s Tobacco Shed Education Center.

In the other 1800’s barns and the 200 year old English style bank barn there are tons of tools including several horse drawn buggies and wagons, including an R.F.D. postal wagon that was used in South Glastonbury, a Buckingham Cemetery hearse, a meat wagon, and sleigh. Mmmm, meat wagon. 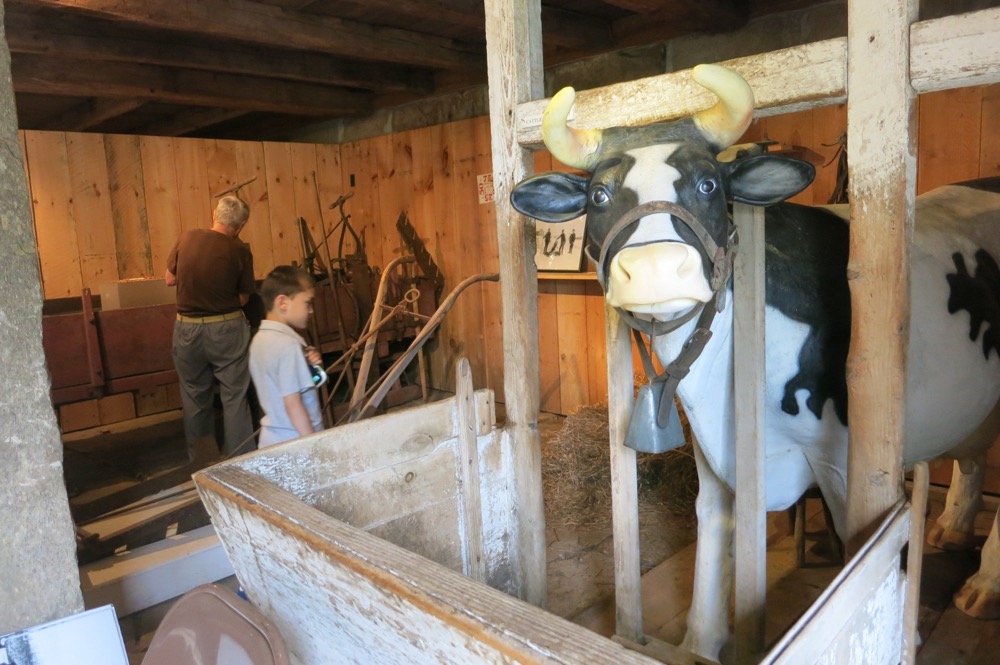 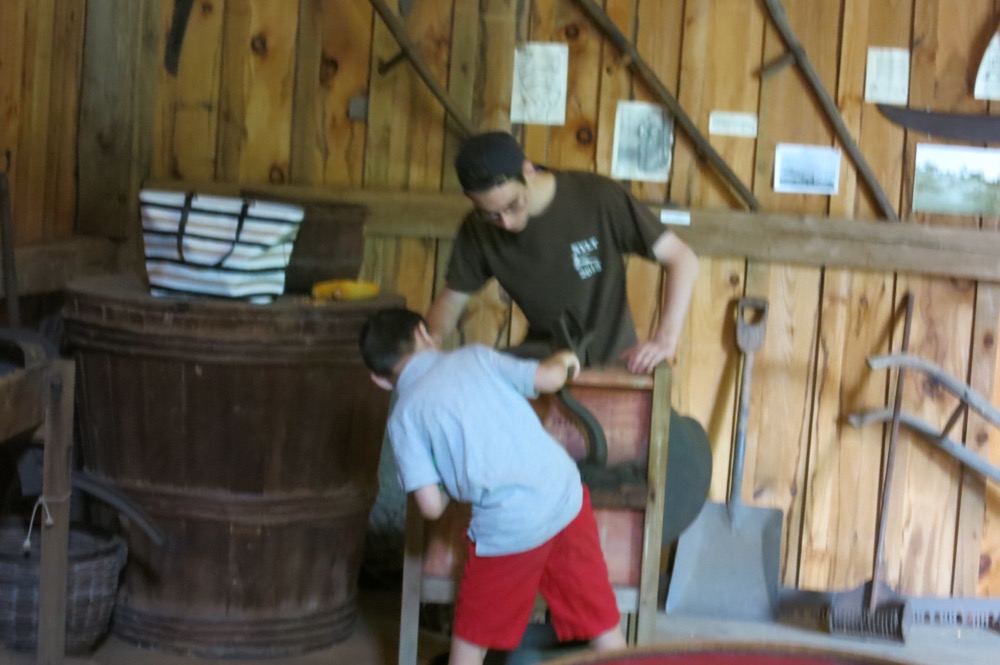 There was a man and some kids toiling away in one of the barns. That was a surprise, and when they excitedly jumped right in with Damian, encouraging him to work some implement, my stress went right back up through the roof. Damian wasn’t quite done with “doing stuff” and he seemed interested in some of the machinery. What an afternoon this was.

Another barn and another person wanting to interact. This place is crazy. People just hanging out waiting for the rare visitor in each building. Like, what are they doing there for hours on end when no one is around?

The collections in the barns are impressive. The Historical Society of Glastonbury has another small museum up the road, but that oddly named “Museum on the Green” focuses on town history, not people history. The Welles-Shipman-Ward House and barns is its signature property. 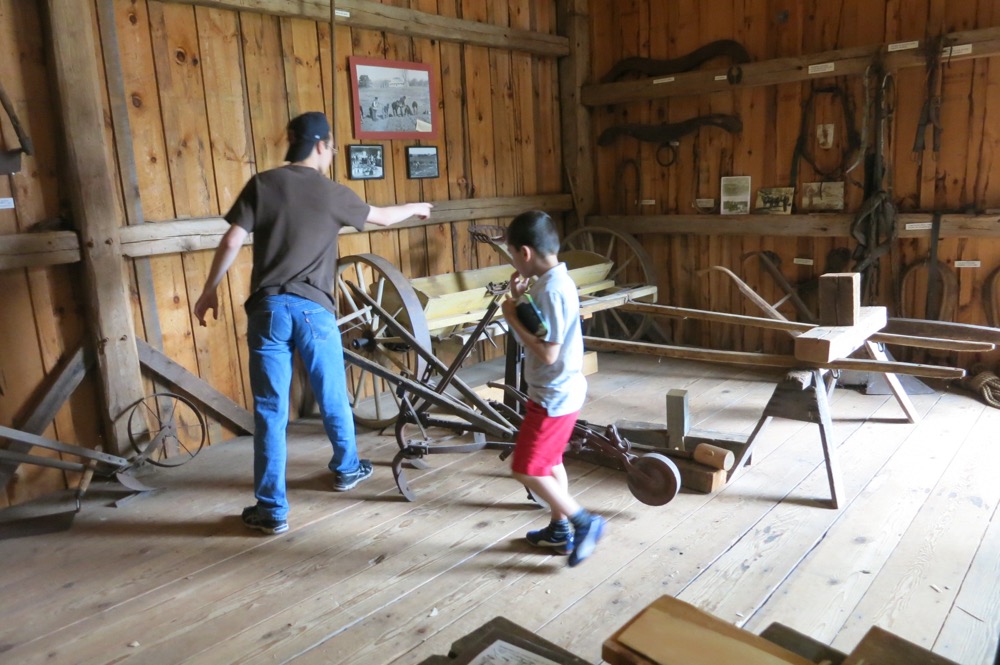 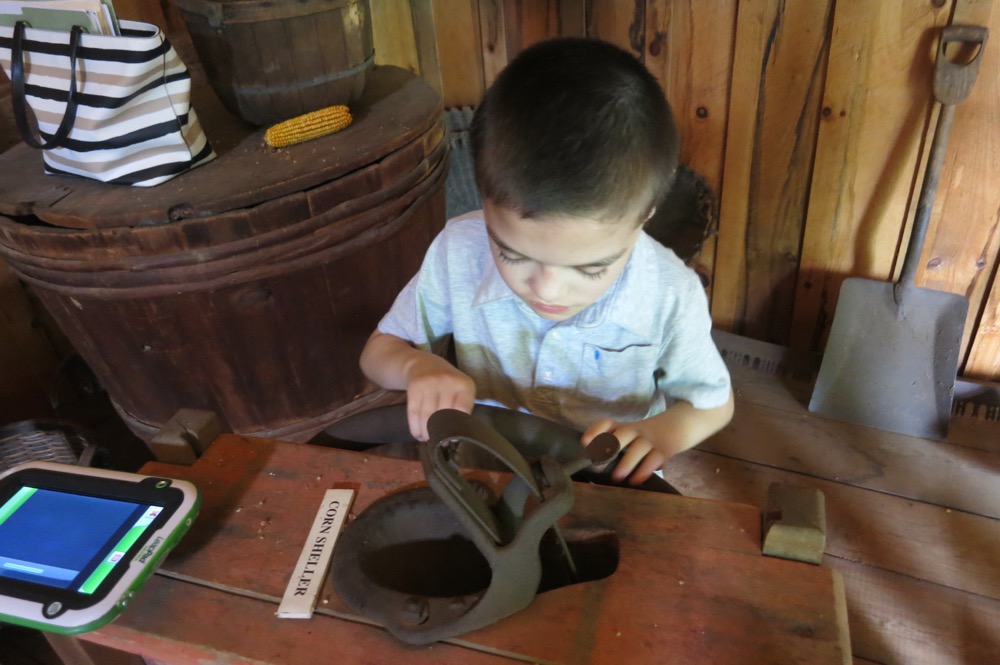 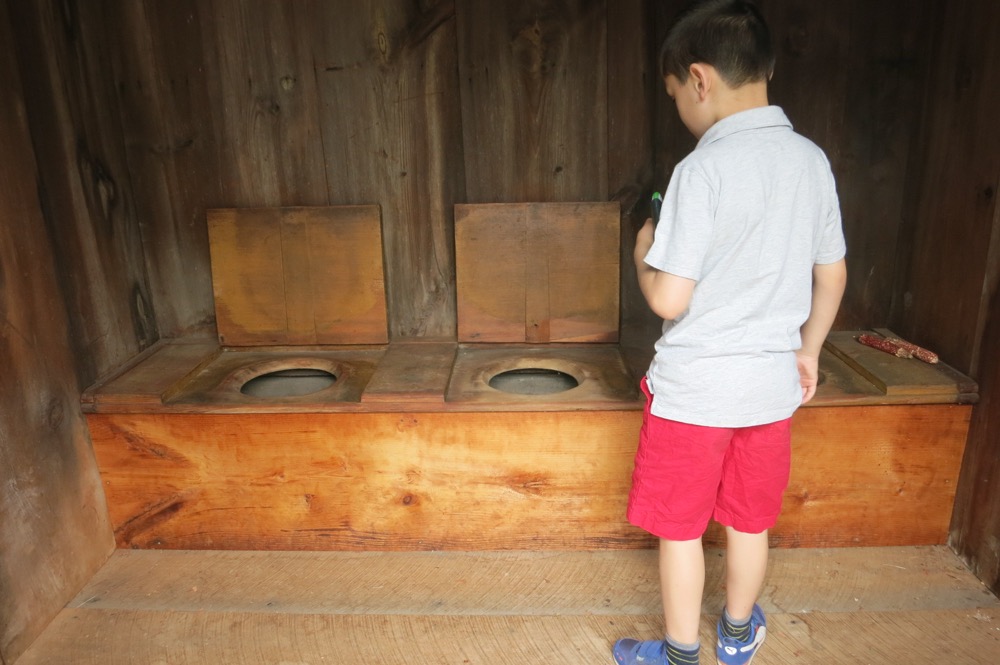 You’re not going to find anything unique or super duper memorable here… at least not if you’re a veteran of New England historical house museums. But for me, I will always love the WSW House for the experience and the beautiful ten minutes my son shared with the wonderful docent.

And I’m glad I have an outlet with which to share these moments with the world. 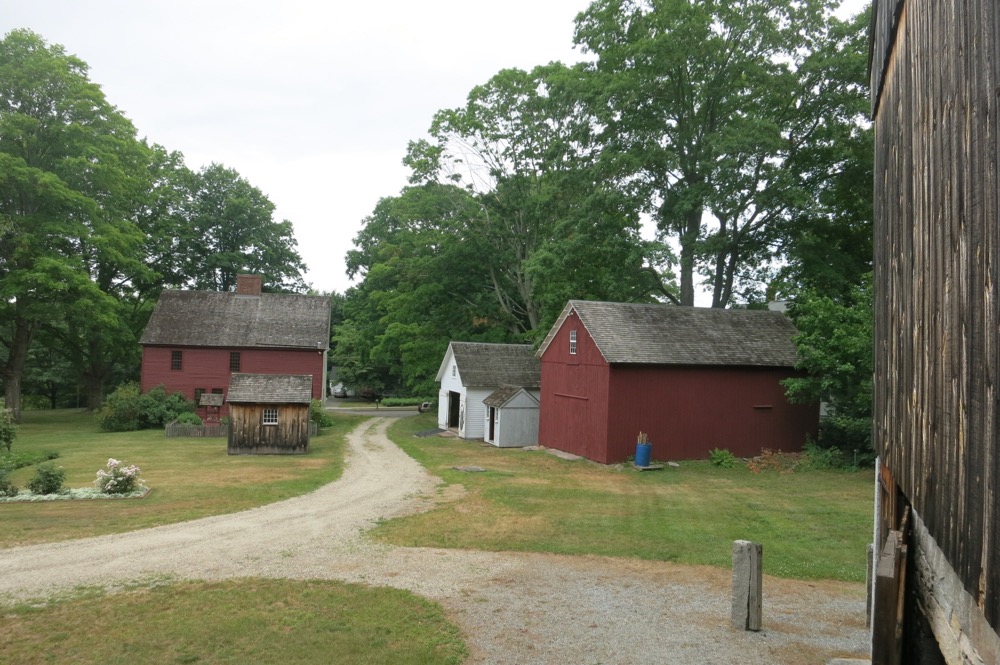