This trail will be extended south to Hartford through Windsor Meadows in 2022.

Alright, look. When you build a trail inside of a large bend in a large river about 2 feet above said river’s normal waterline… you’re going to have problems. And this trail definitely has its problems. 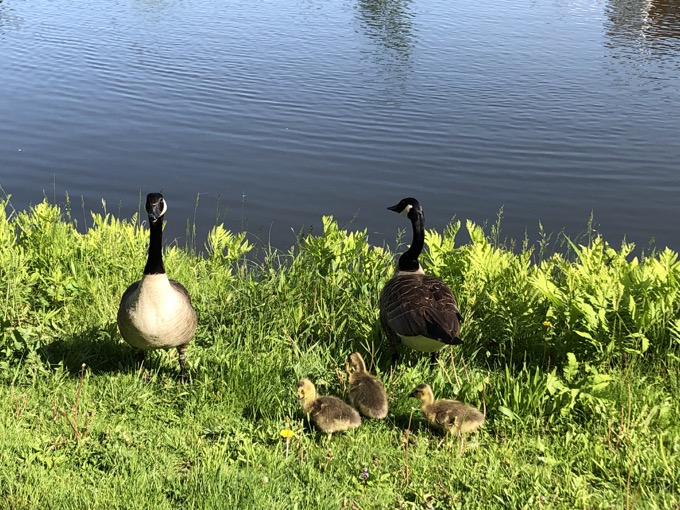 Perhaps not in July-September or so. Maybe. Hopefully. But knowing that floodwaters leave large objects behind, I simply can’t imagine Windsor cleans up this trail after every spring. Maybe? Hopefully?

I dunno, man. In concept, it’s a lovely idea. A paved path from the library/town hall area up to Palisado Avenue and… well, there’s not really anything there – although Palisado is a nice stretch of road with lots of historic houses on it, including the town’s historical society museum complex. And the short paved path is fine. It seems to be popular with folks and I’m sure the Loomis-Chaffee kids use it on their beer coffee runs. 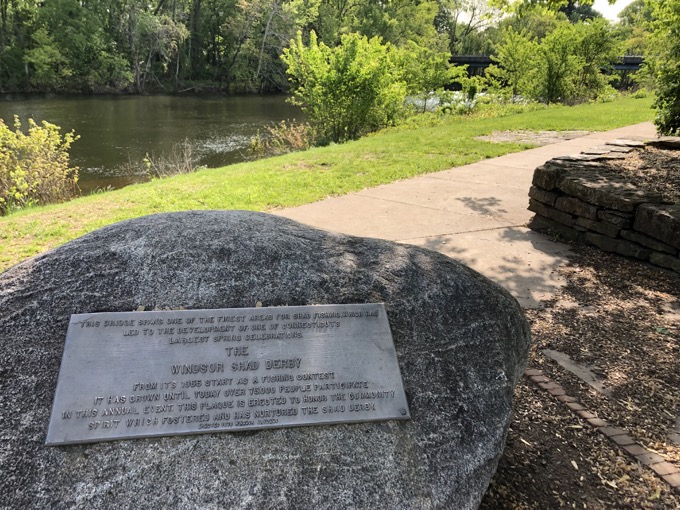 The paved path isn’t an issue. It’s the other trail that creates a loop. It ventures out over to the river and, well… that’s a problem for many weeks of the year.

I think my intent when I walked around this place was to lie to you and pretend that I actually trekked through the floodwaters. I’ll be honest: I did not do that. I started at the northern end at the boat launch and went under Palisado Avenue (route 159), passing some sketchy guys fishing. They were certainly doing something they shouldn’t have been, but I passed by them with no issues. 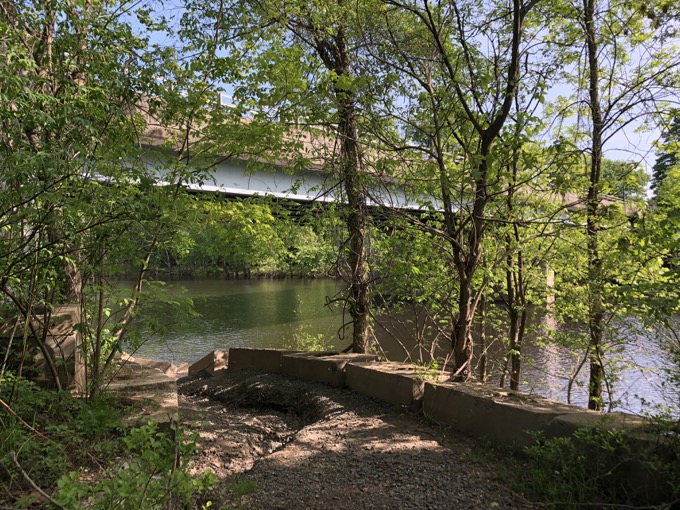 The trail here is nice. Sure it was impossibly buggy with all the standing water, but that doesn’t bother me. I ventured south. I was immediately impressed by the first well-built bridge along the way: 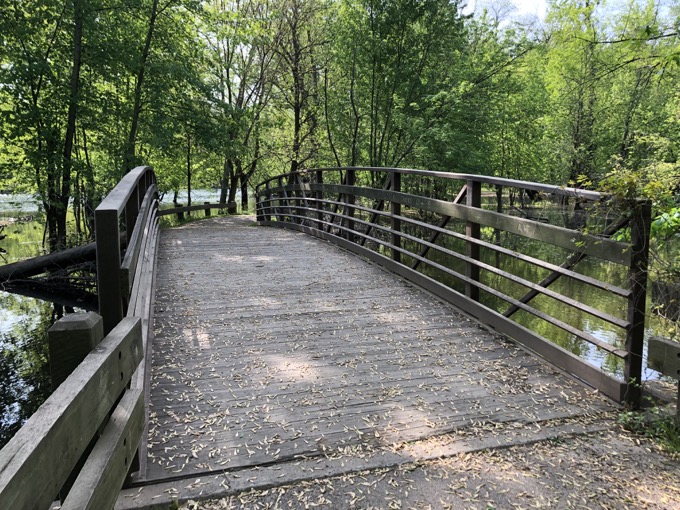 I crossed the bridge and it quickly became apparent that perhaps the fishermen weren’t sketchy at all. Perhaps they were just wondering where the heck I thought I was going and thought it would be funny to silently let me continue. Or, more likely, they thought I was sketchy, heading into the woods to do some nefarious deed. Or I was just too dumb to deal with.

Because I wasn’t going anywhere. 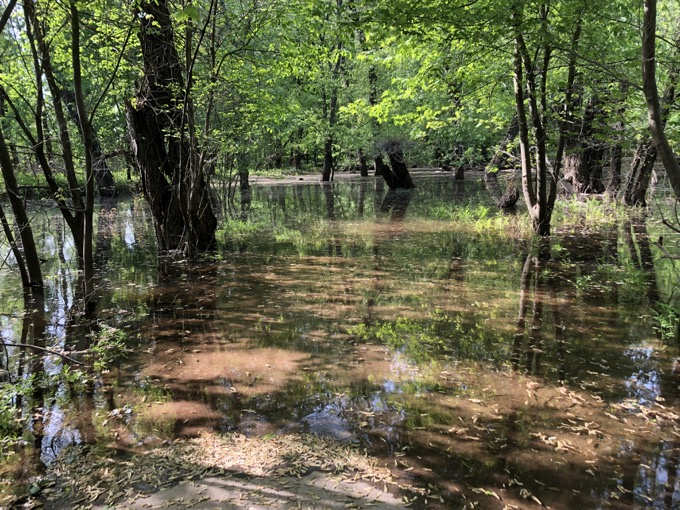 Hm. I thought about making a go of it for a second, but then I’d be proving the fishermen correct. So I turned tail and walked past my new friends just a few minutes later. We exchanged pleasantries this time and I returned to my car.

Determined, I drove to the southern end of the trail to complete the dang thing. The change in plans allows me to explain a bit about Windsor’s proud tradition of the Shad Derby. 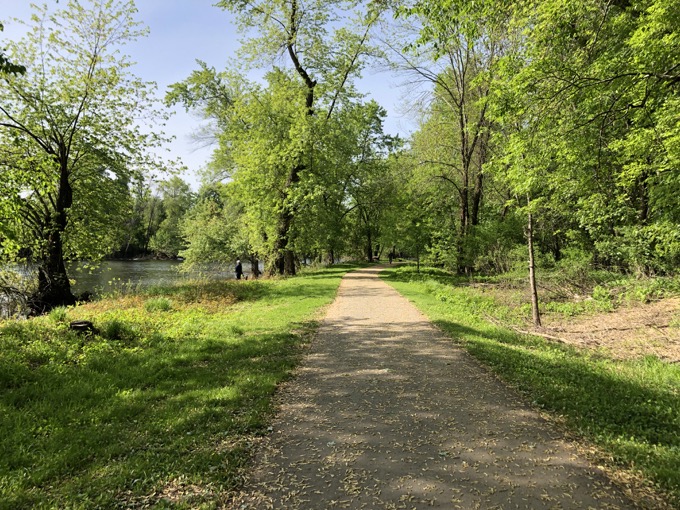 The Shad Derby Festival is a long standing Windsor Tradition. It all began in 1955 with a fishing tournament to raise awareness of the growing pollution of the Connecticut River. In 1966, as the Fishing Derby grew in size a parade and festivities on the Windsor Town Green were added to celebrate & commemorate the Shad Derby while also helping promote the best of Windsor and the local New England area through it’s many resources, attractions, businesses and organizations. Currently, in 2020, over 20 events are associated with the Shad Derby Festival – that always culminates on the third Saturday in May in Windsor. 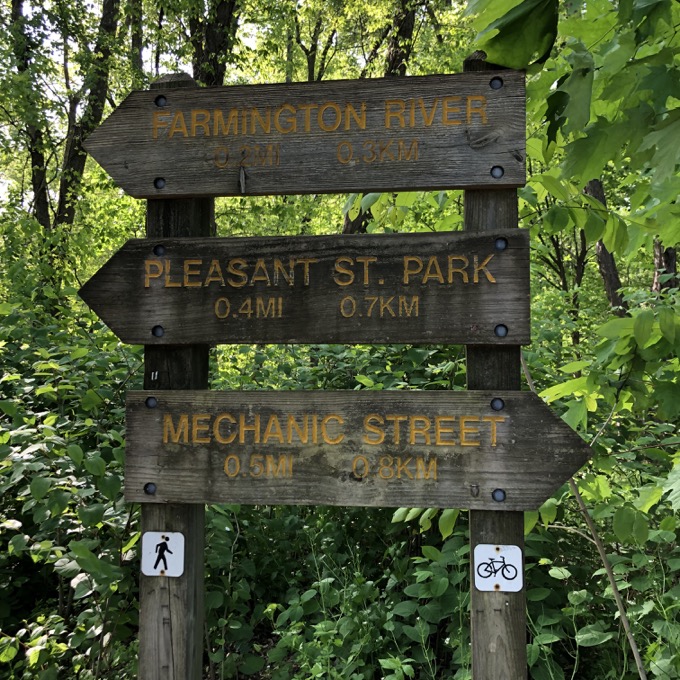 Fishermen come to Windsor from neighboring states, and as far as Delaware, to enjoy fishing along the river’s banks during the Shad Run. The shad swim up the Connecticut River, pass through tributaries such as the Farmington and spawn there. Most of the fish, except the young ones who stay until late fall, remain about six weeks before they head down the Connecticut River to the Sound, then north in the Atlantic Ocean to Canada’s maritime provinces. 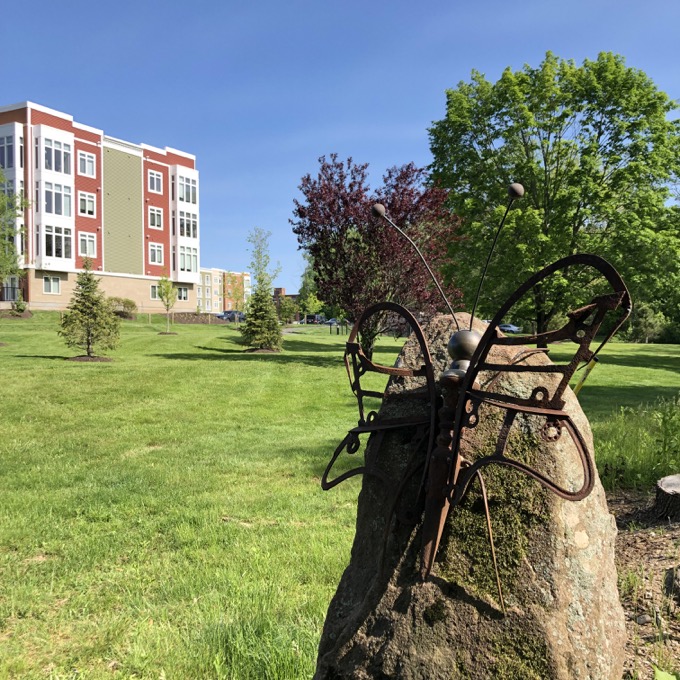 It’s the biggest thing in Windsor every year. You can buy Shad Derby merchandise and Back East Brewing does an annual Shad Derby Ale. There’s a Shad Derby Queen contest every year – based on community involvement and important things rather than beauty. It’s a whole thing that Windsor is – and should be – very proud of.

Okay, back to the trail. At the southern end you can follow the Fitness Trail which, as with all fitness trails that were built in the 1990’s, has pretty much disappeared except for the signs. There are some Len Pelton sculptures here and… it’s all very nice. 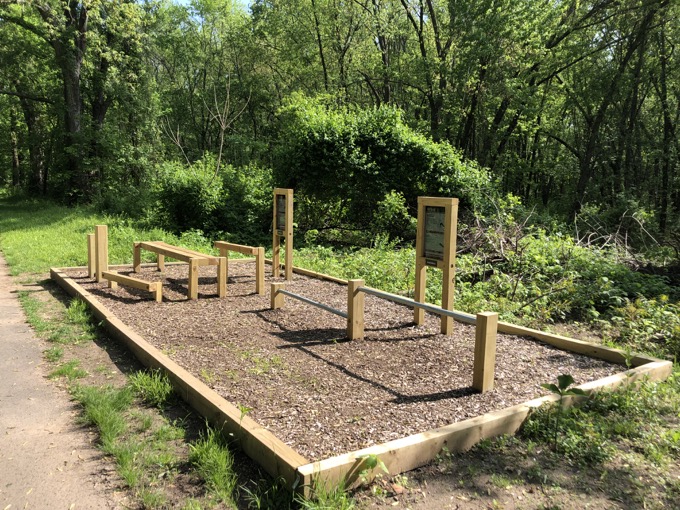 But I was more interested in getting back over to the woodland loop trail along the river. For some reason. I knew I’d run into standing water again, but there are side trails and loops here that allowed me to be a bit more creative.

The trail is very pretty along the Farmington and I know that the people who live nearby appreciate the path. 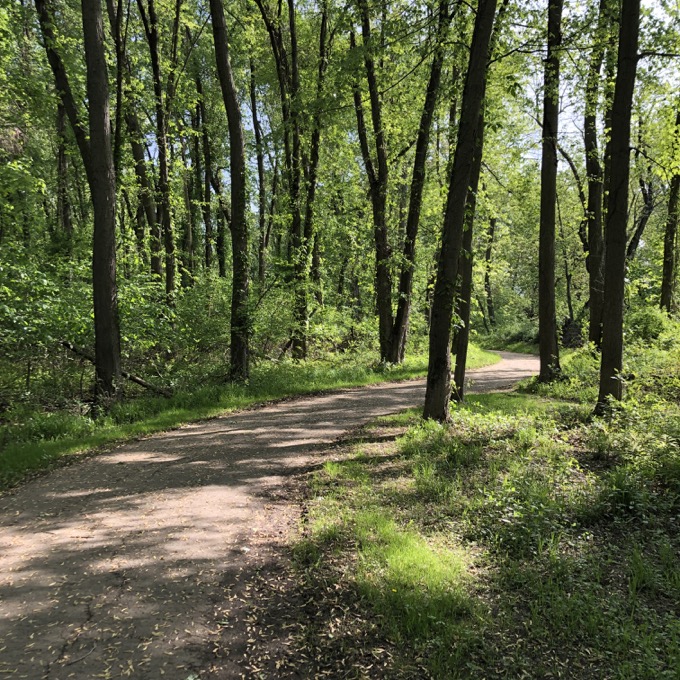 But yeah… I ran into flooding again. Of course it’s not bad here most of the year and I’m just playing up the situation a bit. As I walked all the various options here, I remember thinking, “This is really pretty. It’s a shame that the story I’ll tell will be all about the flooding which totally isn’t fair but I’m still going to do it.” 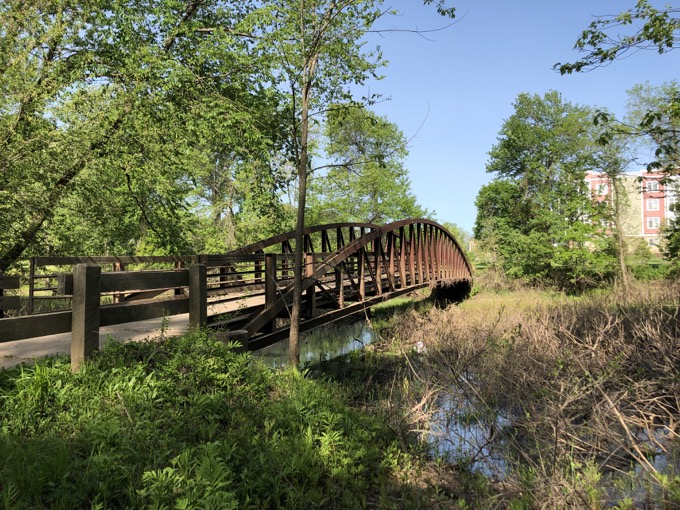 Because I’m a jerk. Don’t listen to me. Look at these nice pictures on this page! Here’s what you should do: Go to Windsor and park at the library – a library I frequent by the way. Find your way to the trail and go for a nice walk through the dry woods along the Farmington River. 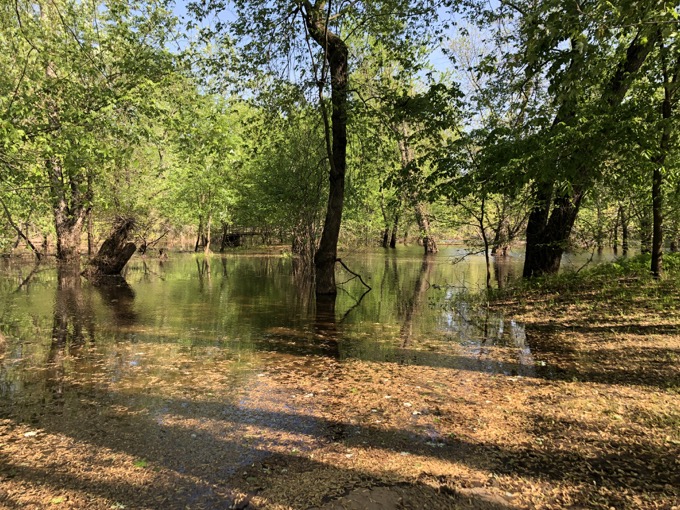 Enjoy the bridges and appreciate what Windsor has done here. Make your way to Palisado Avenue and head north a bit to the Windsor Historical Society museums. Spend a couple hours learning all about the rich history of Connecticut’s oldest town. Walk back south along the road and grab a bite to eat at any of Windsor’s fine establishments. 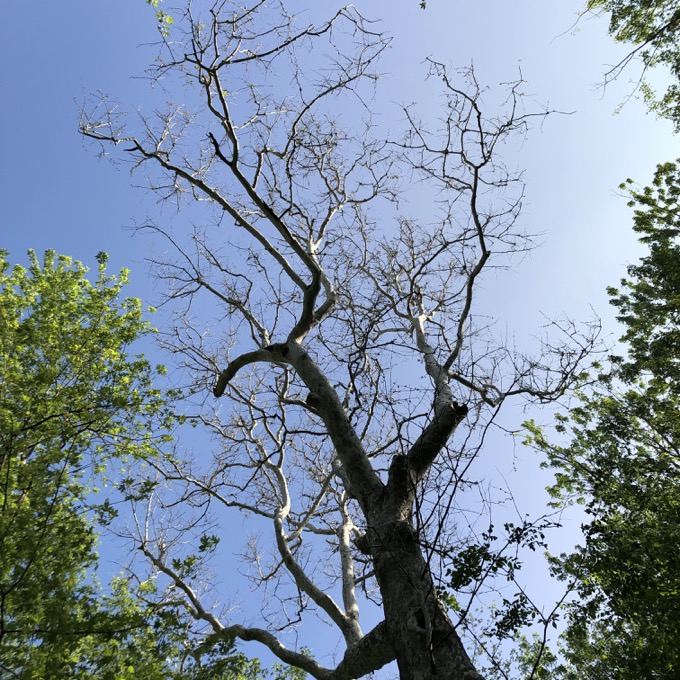