CTMQ > Everything Else > Geography > Wolcott Falls

I live an exciting life. While some people took the opportunity to get drunk on “Cinco de Mayo” for no reason other than to succumb to InBev-AB’s marketing schemes, I found enjoyment in hitting almost all of the Hamden Land Conservation Trust’s properties. (See here.) 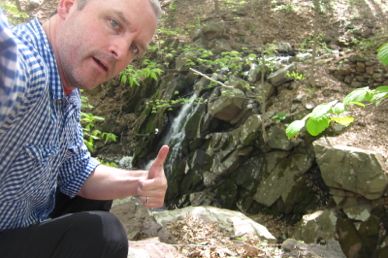 This one, named Timberwood Trail, is nothing more than a short trail down a gradual grade to this waterfall. You can see the houses on either side of the gorge. But that doesn’t diminish the fact that this is actually a pretty darn nice little falls.

The waterfall is created by an outcropping of basalt that hasn’t been worn away over time. The softer New Haven Arkose, a sandstone and feldspar mixture, has been worn down by the creek.

By the way, the indispensible ctwaterfalls website names this “Wolcot Falls” and the HLCT wrote, “Woolcott Falls is owned by the Town of Hamden, and the Hamden Land Conservation Trust has jurisdiction of the trail leading to the falls.”

I don’t know why “Wolcott” is so hard to spell. 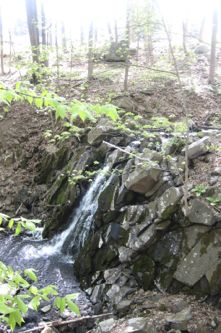 Whatever. I’ve written about basalt 100 times on this site. So let’s learn a little bit about Arkose:

Arkose is known to be young because of its content of feldspar, a mineral that usually degrades quickly into clay. Its mineral grains are generally angular rather than smooth and rounded, another sign that they were transported only a short distance from their origin. Arkose usually has a reddish color from feldspar, clay and iron oxides/ingredients that are uncommon in ordinary sandstone.

Arkose is similar to graywacke, and I know I don’t have to tell you what graywacke is, but just for the sake of continuitiy, it is also a rock laid down near its source. But whereas graywacke forms in a seafloor setting, arkose generally forms on land or near shore specifically from the rapid breakdown of granitic rocks. 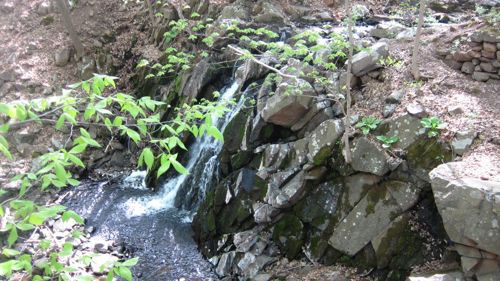 It really is 23 feet high

If you want to see this one for yourself, turn onto Timberwood off of Shepard Avenue in NW Hamden. Find the trail at the break in the low fencing near the far end from Shepard. Walk. The falls are over 20 feet high, despite the fact that my pictures don’t relay that fact.