These days, it’s pretty rare for me to learn about a Connecticut museum of which I was previous unaware. So imagine my glee the day I was reading the column of the one Hartford Courant columnist I am sure to read every week, (friend of CTMQ, Peter Marteka) and saw that he’d visited a brand spankin’ new museum I didn’t know about! 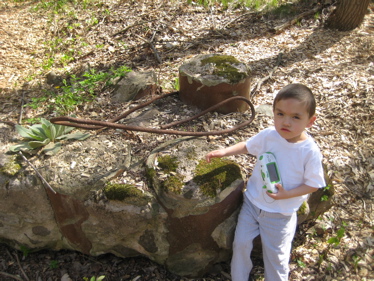 I should note that mixed with that glee was a dollop of shame. I’m supposed to be on top of this stuff.

In my defense, this isn’t really a museum by classic standards, but Marteka’s column was titled, New “Outdoor Museum” Showcases The Vernon Depot and the director of Vernon Parks and Recreation who oversaw this place also referred to it as an “outdoor museum.” (I’ll be using some parts of Marteka’s article on this page.)

Therefore, according to CTMQ rules, it’s a museum. And a rather fun one at that. 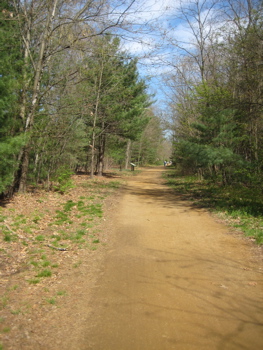 The article ran on April 30th and Damian and I visited only two days later. I chalk this up to my guilt about my Vernon Railroad Depot Outdoor Museum ignorance. I had to correct it as quickly as possible. And so, “get in the car, son, we’re off to Vernon!”

After a couple other stops with the boy, we wondered around the reaches of Vernon searching for the depot. We even drove down Tunnel Road, through the one-lane “tunnel” which Damian enjoyed.

Once I found the parking lot, I parked and noted that hey! This place was pretty crowded! I don’t know if this was a result of the article or if the Vernon rails-to-trails trail is always this crowded, but with Damian in a decidedly foul and lazy mood (a very bad Damian combination, trust me), I was a bit wary.

However, CTMQ forges ahead like a locomotive that once steamed along the long gone tracks here! 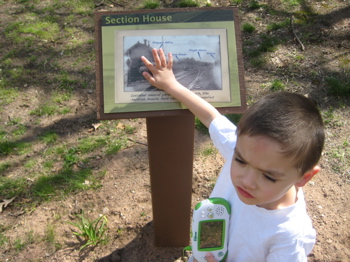 Okay, so what the heck is this place? From what I gather, the idea for the outdoor museum began back in 2007 as a result of [a long-gone, so I can’t link it] Horizons magazine article. The trail was in place and many people walked, ran and cycled through the area every day – most having little to no idea that there was once a very busy train depot right on the spot.

So Bruce Dinnie, director of Vernon’s parks and recreation, and a group of train enthusiasts created the “outdoor museum” at the main trailhead to Vernon’s Rails-To-Trails Park along Church Street. (Dinnie also said that a trip to Gettysburg inspired him, insofar as they have all the interpretive signs out in the fields and stuff.) The rail trail continues to Bolton and down to Manchester, but the museum portion is maybe 400 yards long where the actual depot used to be. 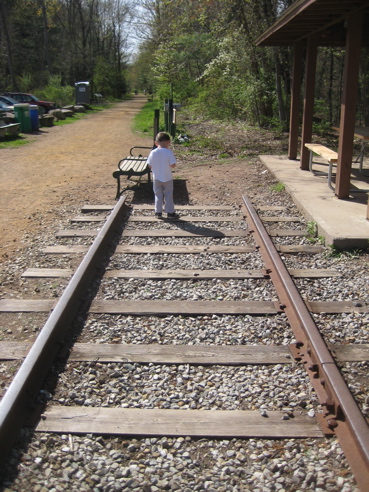 Vernon Depot was a passenger and freight station during the late 1800s through the 1930s that served trains and trolleys running along the Hartford, Providence and Fishkill Railroad.

Dinnie assembled a team of historians and train enthusiasts and set to work. “Recently we’ve had so much trail use, it just seemed natural to put something there that really showcased the history of this depot,” Dinnie said. “We wanted it to be a place where school kids could come to visit and learn about the history of Rockville and how the country was developed by railroads. There were once eight tracks going across there. You never would have guessed that.” 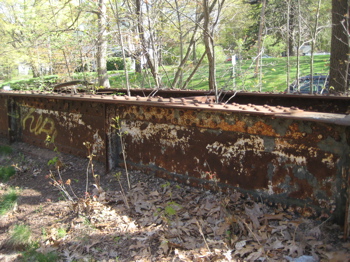 Eight?! No, I’d never have guessed that. As Marteka wrote, “It really is amazing when you try and picture this narrow piece of land between Church Street and Birch Street once held a passenger station and platform, freight house and platform, section house, switchman’s shanty, pump house, water tank, turntable, bunk house and coal bunker.” Indeed.

Damian and I started at the far eastern end and immediately noticed that the signs aren’t just historical narratives, but there are also photographs of the buildings that used to stand on those areas. It’s pretty darn cool.

Instead of my transcribing some of the signs along the way, let’s turn to the authoritative VernonDepot.com for some knowledge:

For 120 years, a railroad brought goods and passengers to and through Vernon and Rockville. Once a bustling railroad corridor, the trains and rails have long since left town. The last freight train passed through town in late 1970, the last regular passenger train, 1955. The rails were removed in the mid 1970’s, but the roadbed remains. Today, the old railroad routes are part of Vernon’s Rails to Trails linear park.

The Vernon Depot passenger station was located on the narrow strip of land that is bordered by Church Street, Phoenix Street, Birch Road and Washington Street. Today, nature has reclaimed the area [CTMQ Notes: This has been claimed back by the museum], but there are still reminders of the past. Not far from the Church Street parking area, the stone block turntable pit remains that once turned around the locomotives running to and from Rockville. A short distance from there, the footings for the water tower poke out of the ground. Next to the visitors shelter, the footprint of the passenger station has recently been cleared and defined with a wooden outline as part of a historical project [CTMQ Notes: That would be this very thing I’m writing about]. Near there, a telegraph pole about seven feet high sticks out of the ground. It had at one time supported two wood boxes that that housed communication devices.

Continuing towards Washington Street, the footprint of the freight house has also been defined as part of the project previously mentioned project. Just west of Washington Street is the foundation of the signal tower. Here, the double track from East Hartford expanded into four tracks where it crossed Washington Street. Up at the Phoenix Street end, the steel bridge beam that once carried the line through to Willimantic and ultimately to Providence, RI, rests upside down on the ground. It was removed and the stone bridge abutments were dismantled when the Rail Trail was developed in the mid 1990’s. 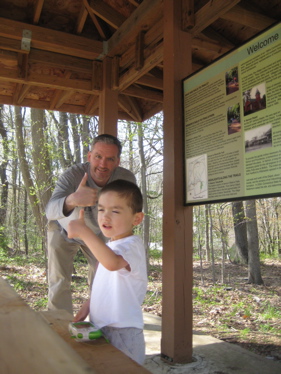 Hm. That really wasn’t all that comprehensive. Let’s poke around for some more.

The Rockville Railroad went into operation in August 1863.

The Hartford, Providence & Fishkill Railroad, to the extent it was built, never made a profit. The railroad fell into bankruptcy in 1863.

Um. Wow. Okay. The article that’s from went on to talk all about the various owners and changes and that sort of thing. Things we’re not so interested in here. We like stuff like, “At its peak, it required eleven people to run the operations at Vernon Depot. Three men operated the signal tower, three in the cabin, three to run the passenger station, a lamp lighter and a man to operate the pump house. Also employed was a section gang and a track walker.”

“In 1893, 14 passenger trains passed through Vernon each day. All of them stopped at Vernon Depot and were met with a connecting train to Rockville. Freight traffic was substantial. In 1907, the tracks from Burnside in East Hartford to Vernon Depot, Vernon Depot to Rockville, and the Melrose branch to East Windsor, were electrified, and trolleys shared the lines until the 1920’s.” 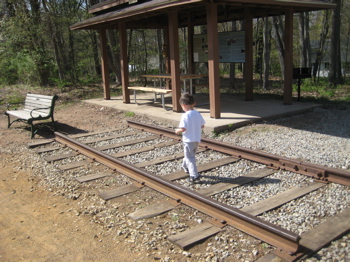 Yeah, that’s good stuff. Let’s get to some more, from the signs around the museum.

You may be wondering why the heck there was a giant depot out here, in suburban Vernon. Well, back in the day, Rockville and Dobsonville (parts of Vernon) was a major textile center. The Hockanum and Tankerhoosen Rivers powered some of the first textile mills in the country, as well as numerous grain and timber mills.

The track at the rear of the depot location was the branch line which served Rockville which was then absorbed by the bigger train lines connecting New York to Boston and Providence. Trolley service was also available from the depot, to Hartford and the resorts at Stafford Springs, as well as the regular service to Rockville.

This depot allowed the mills to ship their wares all over the eastern part of the country. Back in the day, local farmers and businesses could pick up their shipments right here at the freight house, and of course, leave outgoing shipments for later pickup. With the frequency of trains, same-day service was always an option. Now, more than a century later, we have only just become able to have that sort of efficiency again! 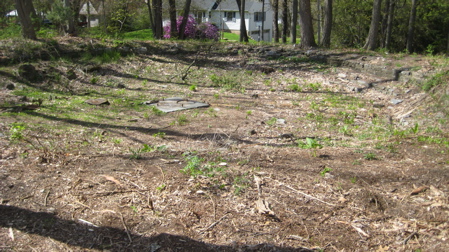 Let’s move over to the turntable pit (above). This is pretty cool – especially since you can sort of still see how it worked today. It was used to turn locomotives to point the other direction. I’d have enjoyed seeing that in action.

Lastly, as Damian and I made our way to the far end of the museum, we happened upon the Rockville Switch. I don’t know how authentic the switch here in my picture below is, but it felt authentic and Damian didn’t really care. 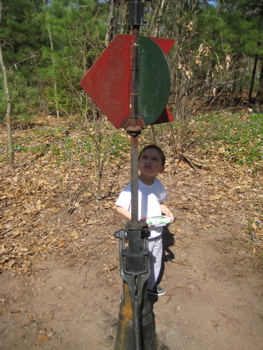 The switch controlled which trains went where obviously. But back then, before computers and what not, the switch operator’s job was no joke. I didn’t find any stories of crazy train crashes here in Vernon-Rockville, but here in our little Connecticut we did have the only four-train pile-up in US railroading history, way out in Thompson. You can have the distinct pleasure of reading about my visit to that very spot right here believe it or not.

And now that I think about that crazy Great East Thompson Train Wreck of 1891, I realize that if it happened only a quarter mile or so to the northeast, it would have been in Massachusetts and I wouldn’t give a hoot about it.

So there you have it – a visit to Connecticut’s newest museum (as of this writing). And Damian even wore his engineer pants – even if they’re a little high-water. 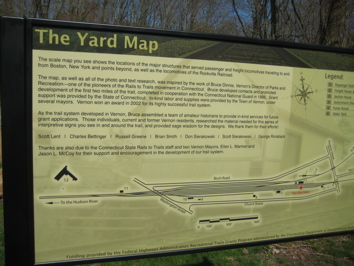