I wonder if I’d include this tunnel on CTMQ if I wasn’t “completing” Vernon at the moment. After all, I’ve driven through it dozens of times over the years and never gave it much thought.

But after going through it several more times while hitting every little trailed property in Vernon, I finally decided to learn a bit more about it. And moreover, to think about how many drive-through tunnels we have in the state. 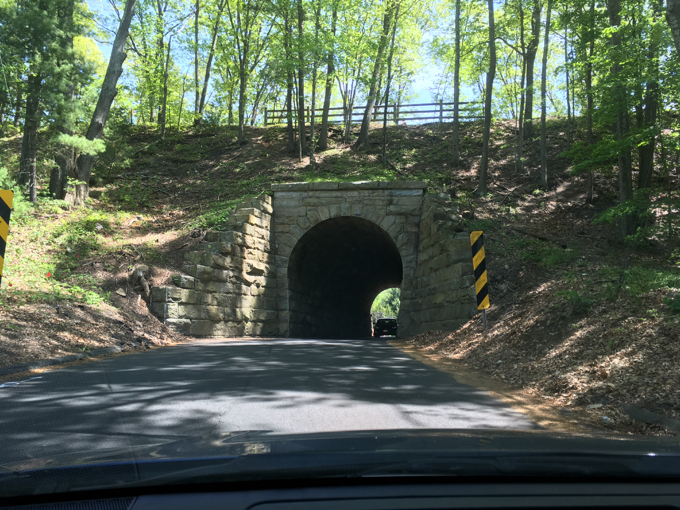 There are three: This one, the much larger Heroes’ Tunnel in Woodbridge/New Haven, and of course the Pitkin Tunnel in downtown New Haven. All three are very different, but what’s interesting is that there are only a couple other vehicular tunnels in all of New England.

The one in Vernon is the most historic.

The one hundred eight foot keystone arch tunnel, the longest in Connecticut, is an outstanding example of the stonemason’s art. Built between 1846 and 1849, by masons and stonecutters, many newly arrived from Ireland, with only the help of oxen and hand tools, it is a marvel of engineering skill.

This is very evident when you have to stop and wait for a car to pass through from the other direction. One. At. A. Time. What’s really interesting is that this isn’t a tunnel through a natural feature… 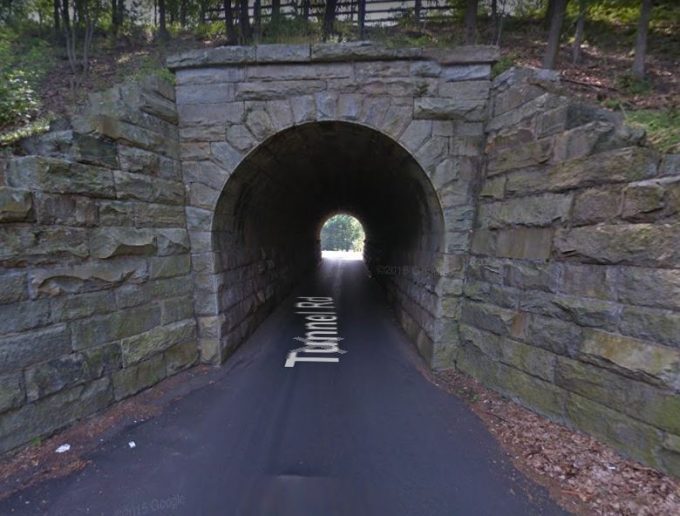 The sudden rise in elevation from the level sandstone valley at Vernon Depot to the hills of Connecticut’s eastern highlands in Bolton proved a problem to the men who set about laying the first railroad tracks from Manchester to Bolton Notch. To provide the gentle incline necessary for the trains to ascend, a tremendous amount of earth fill had to be brought in and tamped into place. In order not to block the then long-existing road from Lake Street to Vernon Center this tunnel was constructed. To do this a strong, temporary wooden frame, called a “central”, the exact size and shape of the finished vault was built. This held the weight of the inward leaning side stones until the keystone at the top of the arch was firmly set in position.

This keystone thrusting downward on each side pressed the side stones of the arch more tightly together. At this point the wooden scaffolding which had been holding the weight was removed.

This was done 120 years ago. It hasn’t needed repairs. It doesn’t leak. It’s amazing. 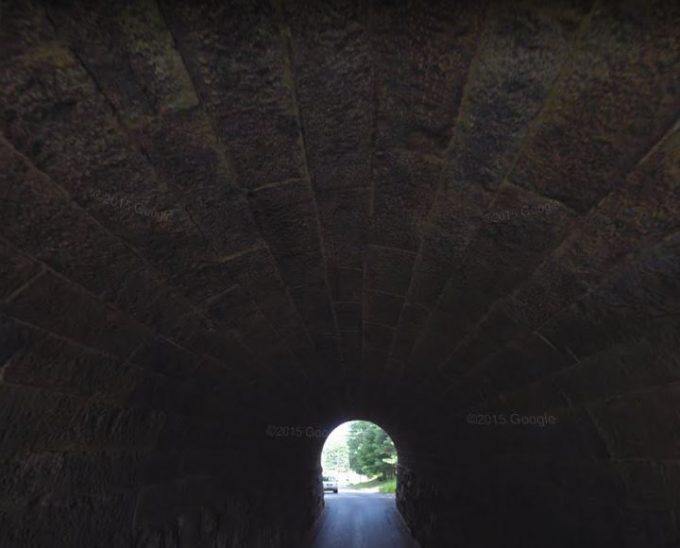 This tunnel is made up of thirty arches. Native sandstone from the quarry on Box Mountain was cut and set in each inner arch as carefully as for those facing its two entrances. Mounds of earth on both sides were needed to support the thrust at the base of the walls and the tracks on the roadbed above, along which trains passed for over one hundred twenty one years.

At its opening the tunnel is fourteen feet wide at its floor and sixteen feet high up to the base of the keystones. Each arch is composed of nine stones on either side of the keystone, supported by five blocks, some as much as five feet long and one and one-half feet in height and width. Its retaining wall is made up of forty to forty-five huge sandstone blocks arranged in a stair-like formation Two courses of stones rest above the arches surmounted by a twenty foot four-part capstone.

Along the inside corridor of the tunnel not a crack nor falling stone is in evidence and the walls themselves silently speak of the pride in their workmanship those early craftsmen felt, for high on the vault’s sides are carved the initials of many of those who toiled here. Near the north entrance, four blocks up and four in is carved the whole name, “GRADY, JERRY”, a mason who settled on Lake Street in 1854.

This venerable tunnel, sometimes referred to as the ‘Keyhole Tunnel” stands not only as a fine piece of architecture but as a monument to the integrity and honest workmanship of Vernon’s forbears. 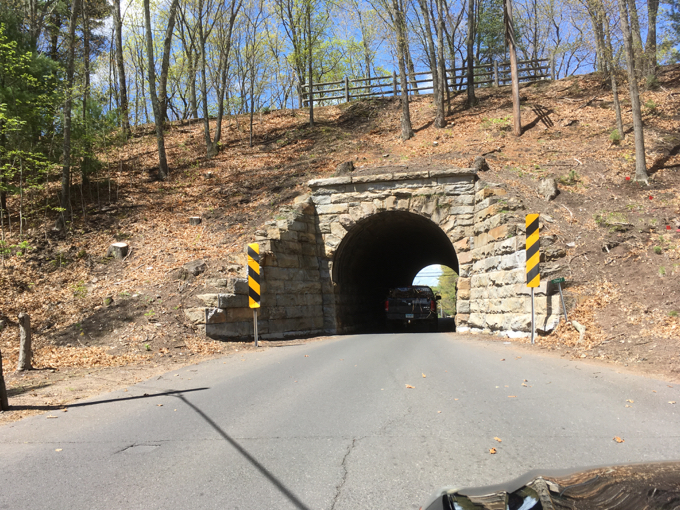 I love this tunnel. Please, Connecticut, never “expand” it. It’s amazing. There is a parking lot to access the Hop River Trail that follows the abandoned railbed over the tunnel at the southern end. I suppose you could park there and go look at the stones closer, but as you can see, that would be pretty stupid as it’s just too skinny with traffic.